If you click on a link and make a purchase we may receive a small commission. Read our editorial policy.
Star Renegades review

There is a lot happening in Star Renegades. For a seemingly small game it throws an absurd amount of idea clay into the RPG kiln. What comes out of that fire is an impressive, if unwieldy, mosaic pot. You can easily spot pieces of other games. Into The Breach’s do-over storytelling, Grandia-esque timeline battles, a whiff of Shadow Of Mordor’s nemeses, and not-quite-Persona levels of relationship management.

But look on the work as a whole and Strenegades glitters in its own way. It’s Octopath Traveller with fewer cares, more self-awareness and angrier automatons. As a member of the turn-based, roguelite family it is far from perfect. But, I tell you what, it’s got moxie.

For starters, it doesn’t take itself even slightly seriously. Your solar system is under threat by a dimension-hopping cyborg army out to end all opposing universes. Cuckoo anime nonsense that rarely gnaws at real-world concerns. Characters include sword slasher Wynn Syphex or robot fundamentalist Xurx Nrza, sticking with the proud sci-fi tradition of stuffing names with the most far-flung characters of the Latin alphabet (something that will prove a problem). Dialogue often raises a smile. “WORK MYSELF INTO AN UNRELENTING RAGE?” yells one enemy. “DON’T MIND IF I DO.”

It’s bursting to have fun. The slick artistry isn’t limited to delectable pixel spritebots and robotronic animation. There are lots of small touches. The toyish 3Dness of the overworld map, for example, blurring out of focus at its edges, where pink clouds drift by. The screen cracking into pieces at each enemy encounter, falling away like a shattered glass window to reveal the battle itself. It has all that recognisable nu-retro spirit. They may as well have called it Screenshake Wars.

It looks more complicated than it is. That isn’t helped by the game crowding you with information and numbers. Armour levels, resistances, traits, critical effects, countless symbols that go unexplained for far too long. There is an underlying simplicity to it. Just batter the bad lads with the right moves until they miss their turn. But that requires a lot of tabbing between characters, consulting numbers in the corner of the screen, tongue-clucking at the time bar, weighing various status benefits. It can be an overwhelmingly busy screen at times. Just look at this: 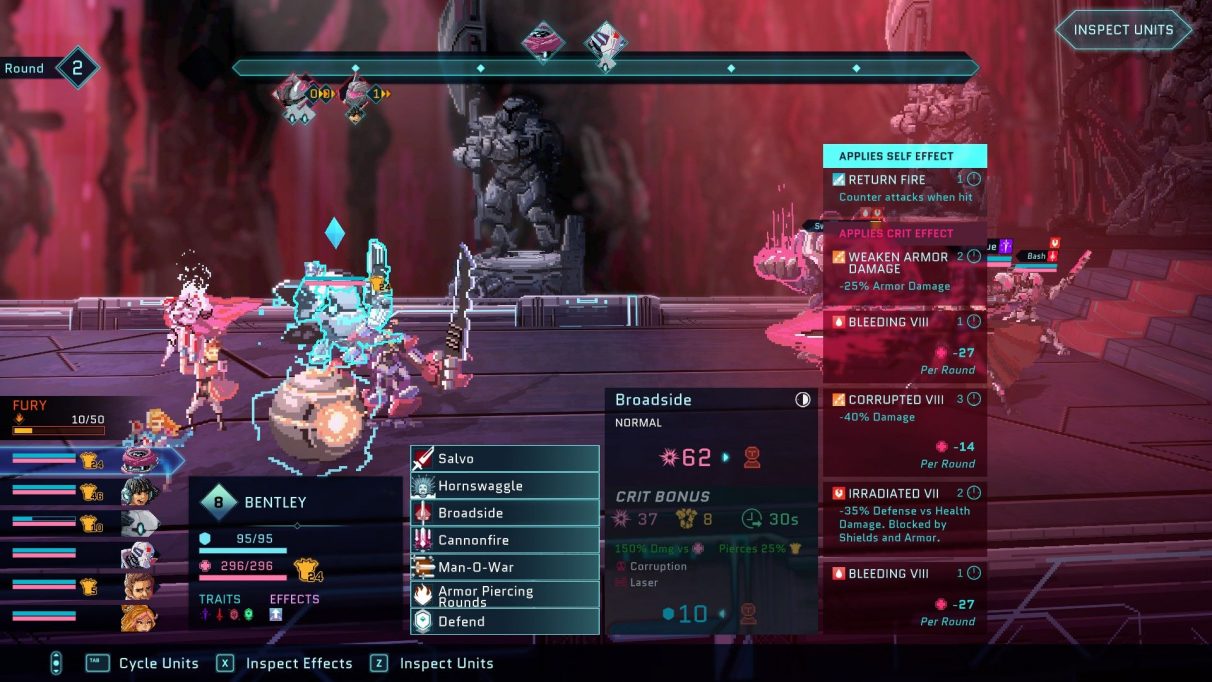 Come on. Those boxes are covering the enemy health bars. It looks like a spreadsheet has been irreparably screen-burned onto Final Fantasy VI. It’s over-eager, and to be honest things only get more convoluted as you go. To confuse matters, some attacks will fire straight away, while others wait until you’ve input everyone’s orders. It feels like calibrating an unwieldy machine. Peering over the components and delicately prodding parts. The UI gallantly struggles to keep everything in order, but it clearly runs out of real estate. I often felt like I needed some sort of “dummy run” to plan out my actions.

You can cancel a move by hovering over your fighters, but that doesn’t prevent the odd mistake that would benefit from an undo button. There’s also occasional boss battle bullshit, whereby an enemy will have an extra attack you weren’t warned about, or pulls a stunt like, oh I don’t know, exploding into poisonous vapour upon death. Yes, I am bitter. 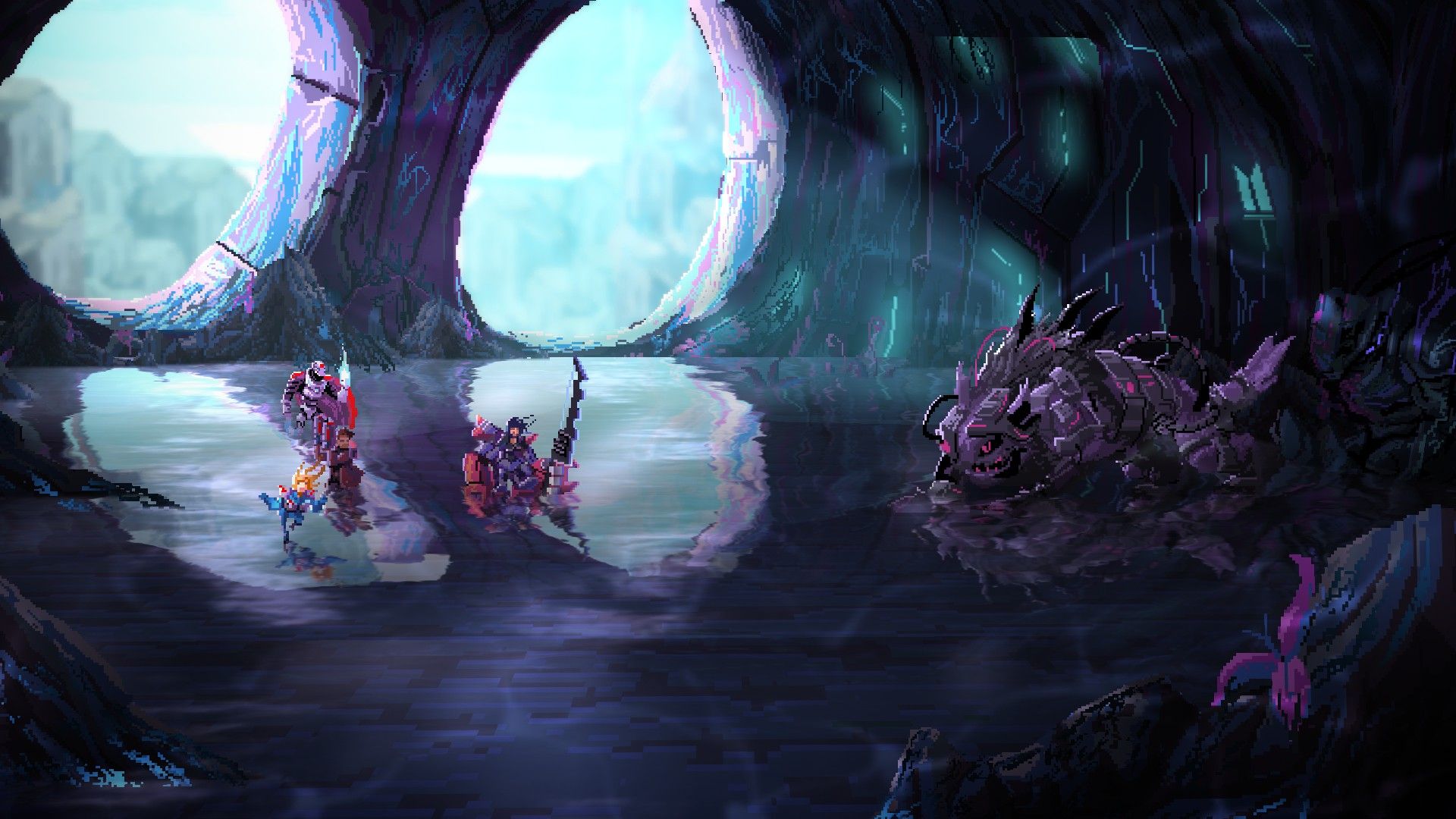 That runs counter to the spirit of the fighting. Like Slay The Spire et al, the hook is that you know the exact onslaught you’re about to face and can plan around it. Out-of-the-blue “got you“ elements aggravate me more than keeping me on my toes. Dust-ups are already challenging, both in terms of managing your health bars and in terms of keeping track of the millions of numbers, arrows, statuses, and icons. A big robot dog with a surprise “vengeance mode” who restores a quarter of its health at the moment of defeat? That’s unnecessary.

When you are killed off a handy drone blips to another dimension where you get to select a fresh trio of characters to start over. You’ve accrued transdimensional currency on previous jaunts, of course, letting you unlock new equipment or characters, who appear in a jokey cantina bantering amongst themselves. 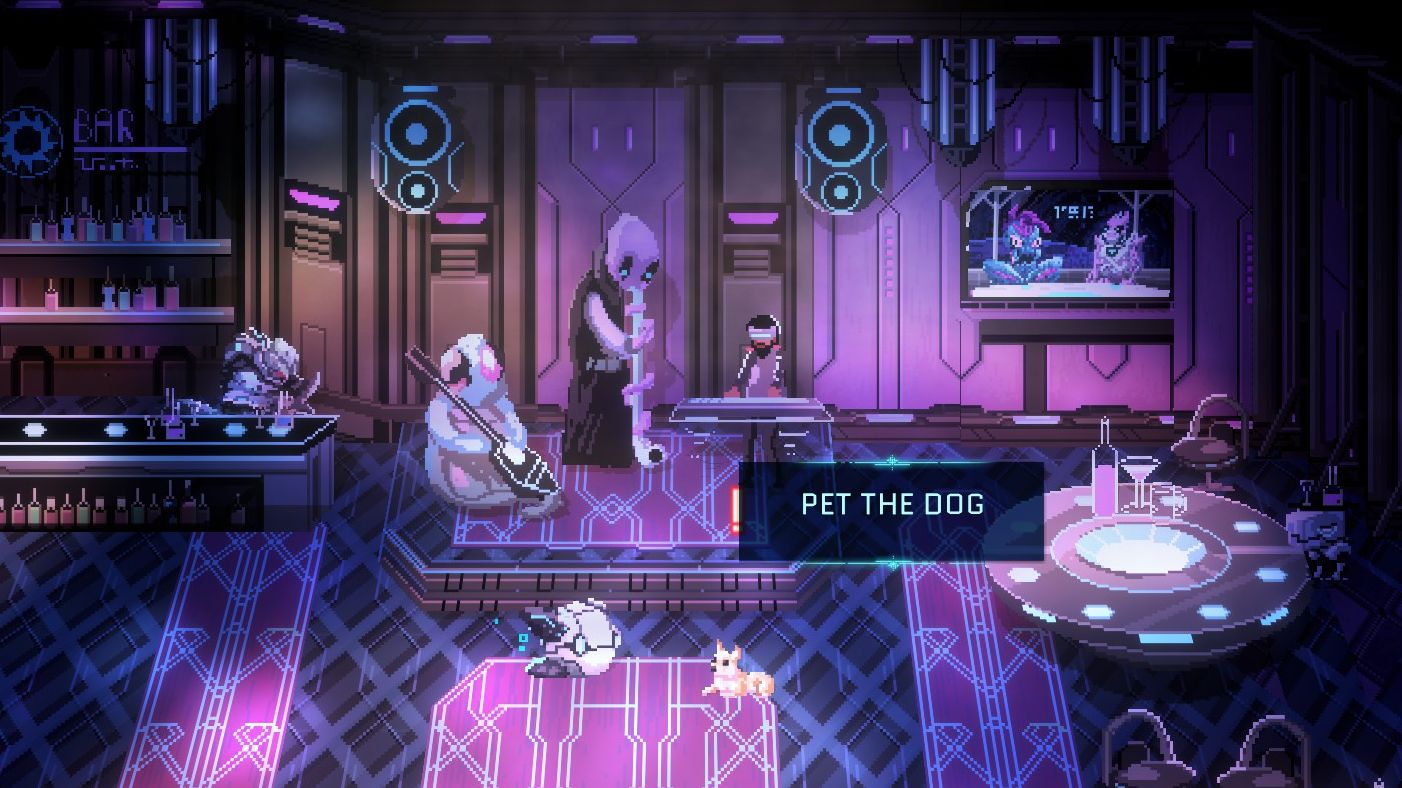 There are known quantities, like your vengeful anime sword captain, a sarcastic robot crusader, or a rogueish pistolera who may as well be called San Holo. All different classes with their own tactics. There are “empaths” who can inspire frontline attackers to take an extra swing. “Commandos” who can bombard baddos with explosive area-of-effect attacks. “Aegis” shieldmaidens who can put themselves in the line of fire and reflect damage. San Holo is a “saboteur” who specialises in a “blitz” attack, which staggers the enemy so thoroughly and reliably he is always a member of my team, bringing his legally distinct rogueishness to the camp fire.

Oh! Let’s talk about the camping. The camping is cute. 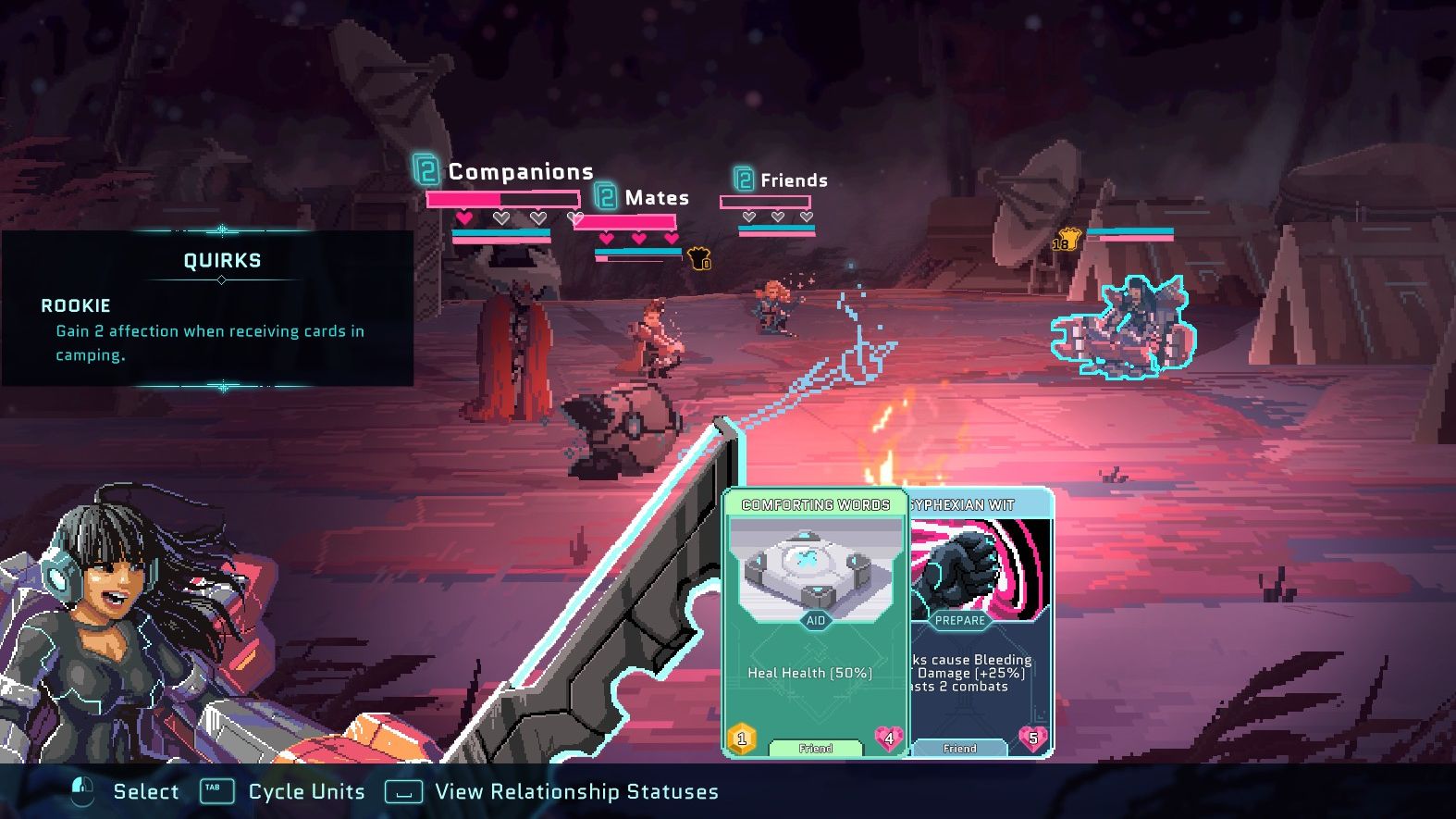 The overworld map has a day and night cycle of sorts. When night rolls around you’re forced to set up camp. Here you make characters swap cards, a little gift-giving ceremony to grant each other bonuses in upcoming battles. Maybe sardonic priestbot gives your mechamaiden extra shields for the next two fights. Or maybe mechamaiden gives San Holo the rowdy encouragement to ensure all attacks do bleeding damage.

More than this, the cards increase a heart meter between the characters, meaning the more cards one character gives to another, the more their relationship grows. The meter gradually fills, granting more benefits (better health, resistances, damage) until finally, it reaches 4 hearts, the maximum amount any human is able to love. At this point they produce a... well, the game calls it a “progeny”. This is a new preset character who combines the look of both parents. Basically, you can manipulate bible-bashing Bicentennial Man and Emily Blunt from Edge of Tomorrow to have off-screen sex and produce a furious mechanical jihadist who can strip enemies of armour. Isn’t that cute? I think it’s adorable. 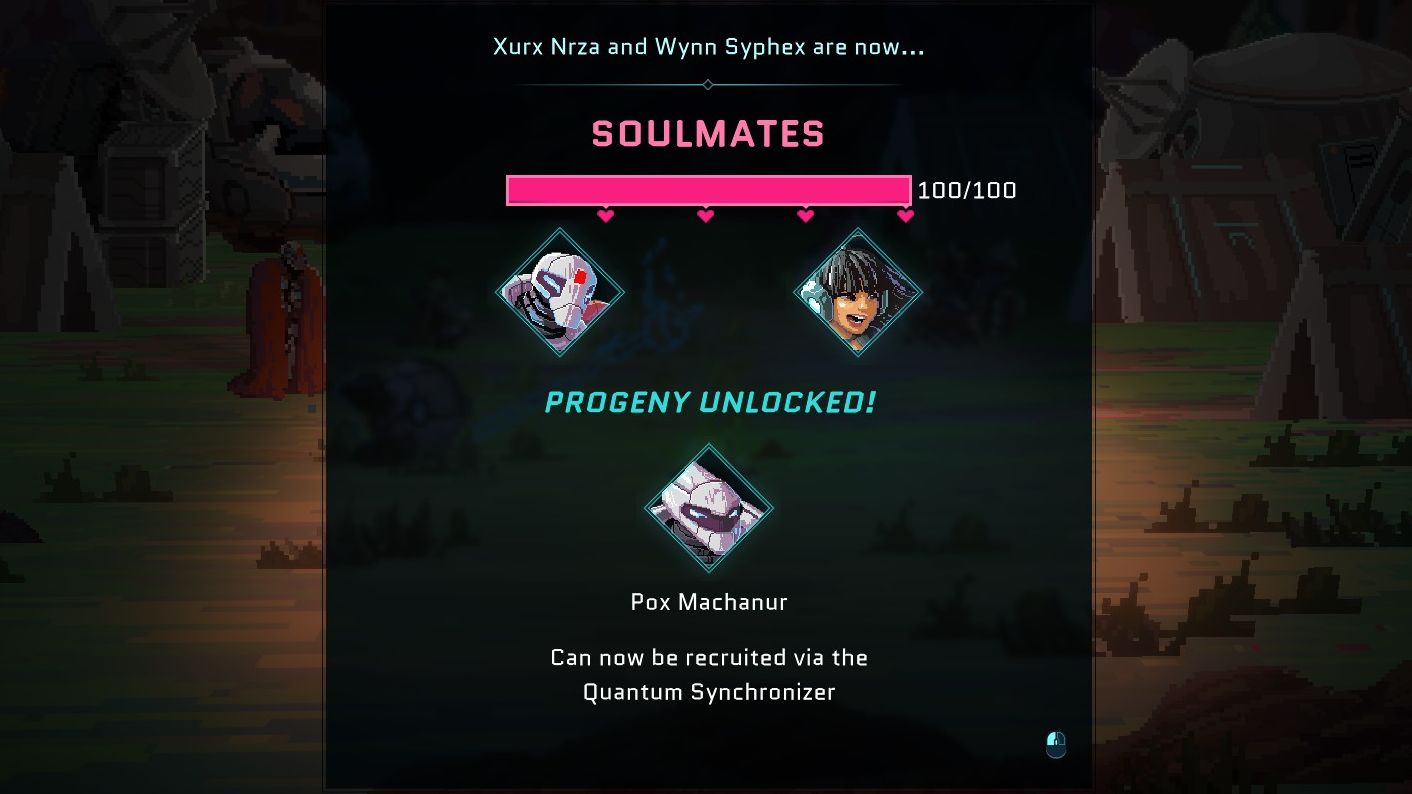 This gives you more to chin-scratch over between fights. Should your tanky Valkyrie character use a card to heal herself? Or should she spend it on a less-injured squadmate so they come closer to smooching? For all the clamour and crowdedness I’ve been complaining about, there is a real generosity on display here. Layer upon layer of gameiness and strategising that doesn’t come across in explosive GIFs. It’s neat, even if those ideas don’t always hit the mark.

Take the supposed nemeses system, for example, inspired by a certain popular orc dating simulator. I’ve seen enemies retreat from battle, and messages that say “Imperium lad so-and-so has been promoted” after he wiped out my team. Yet I’ve never noticed those enemy commanders again. Maybe because it’s difficult to tell them apart. Bad guy names are again dreamy Z-filled sci-fi nonsense, name soup that ferociously resists memorisation (can you remember the names of the two characters I told you earlier?) 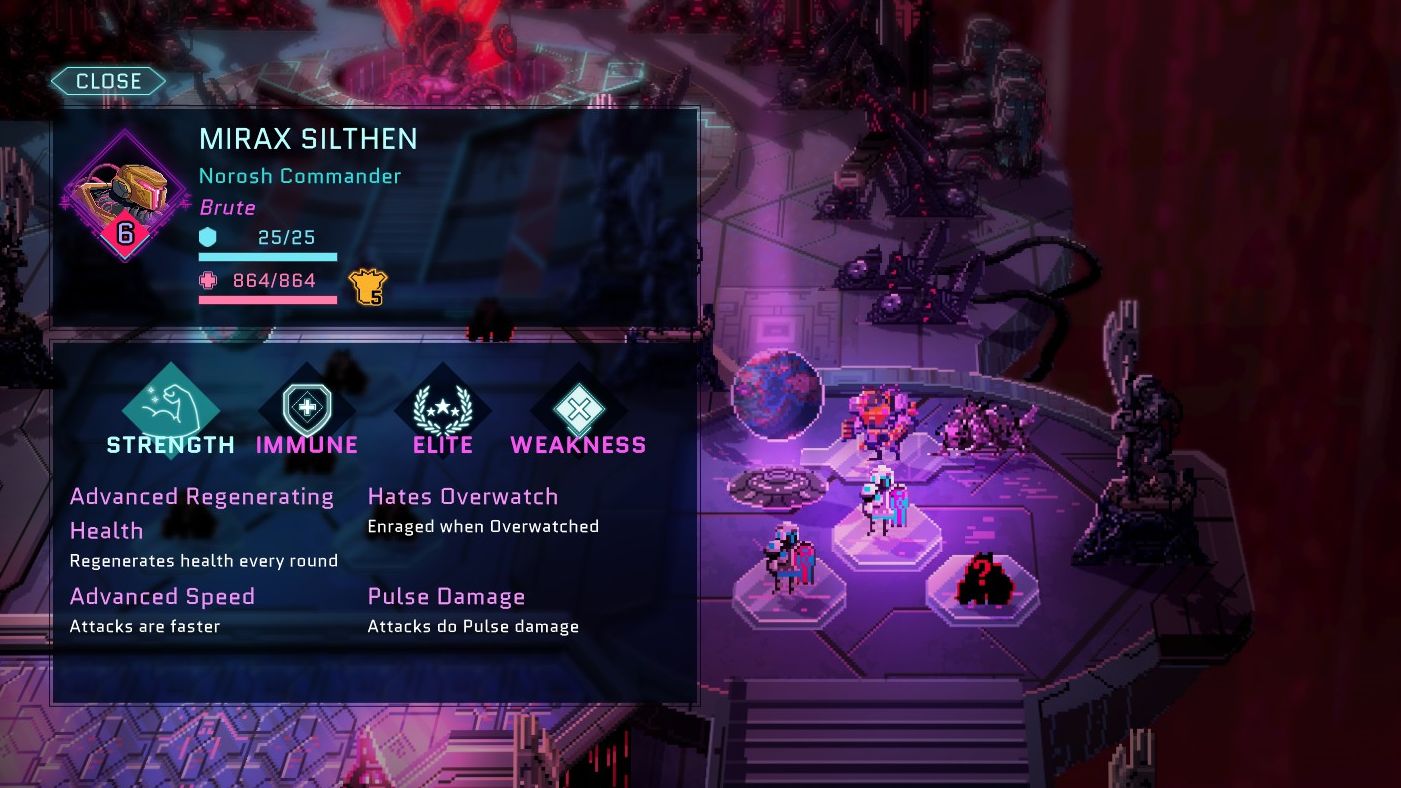 And unlike Mordor’s orcs, they don’t have very memorable personalities. They can “hate fire” or “loathe stunning” and become enraged in the same way. They often have fun lines of dialogue. Still, they’re nowhere near as recognisable as “Pushkrimp the Friendly”. I never got in a fight and thought: “Oh jeez, this guy”. They’re all very indistinct.

I have a bunch of other quibbles. In fights you can only attack rear flank enemies once the front flank is dead. So it’s frustrating that there’s no permanently visible mark to show who is frontline and who is backline. Moving your fightists on the overworld map is also a bit tedious. You have to navigate each portion of the map independently. You can’t spot a distant plateau, click on it, and watch your train of fightchildren waddle through passageways under their own steam. Also, as stylish as pixel grit is, it’s hard to scan the landscape for important stuff: crates, encounters, shield upgrades. Planning a route makes me want to zoom out and trace a plain, iconographic map over everything. Sadly, there’s no “zoom out” function, so getting an idea of the map involves a lot of scrolling around. 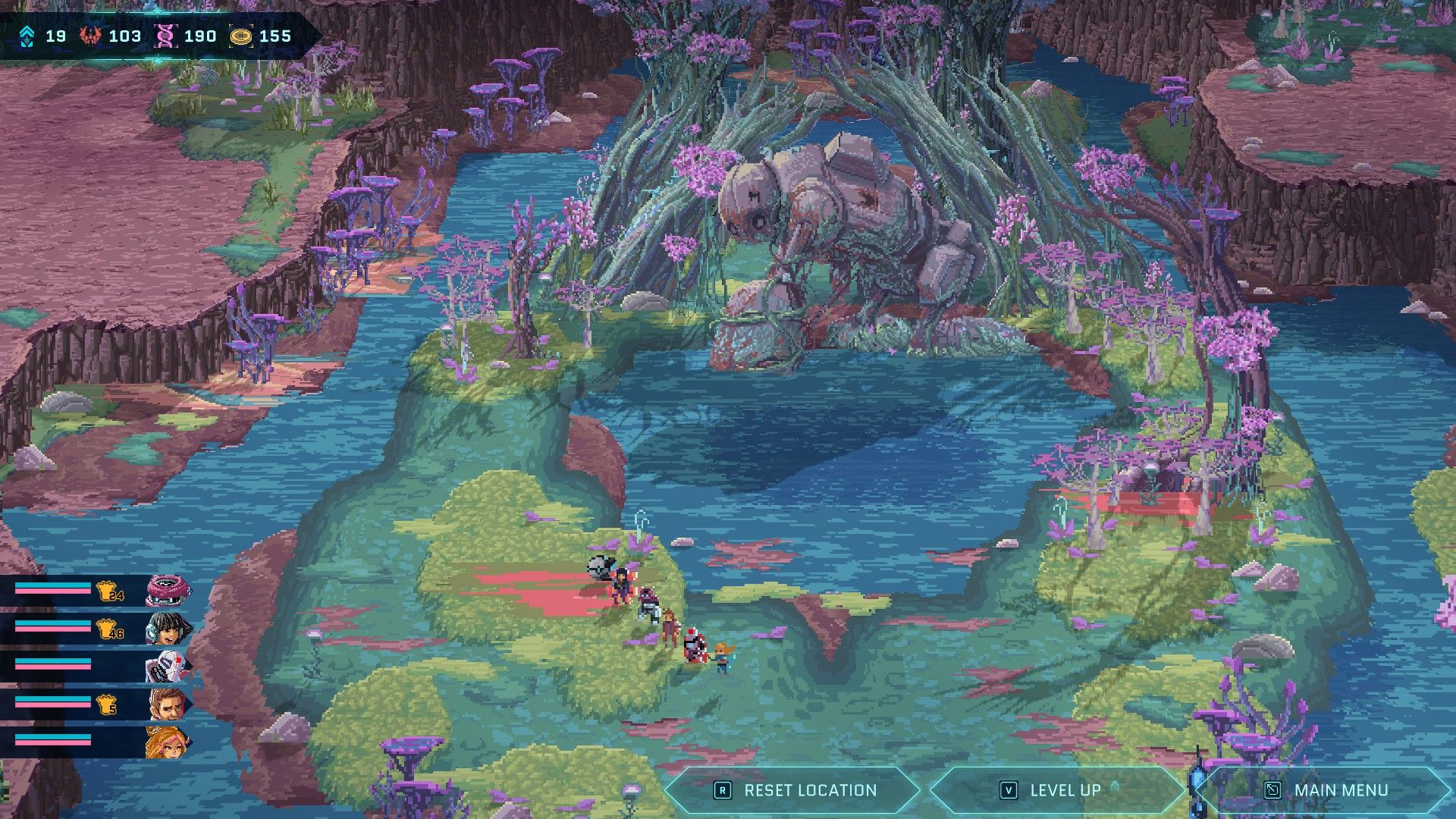 That’s Star Renegades’ problem in essence. If it has a big flaw, it’s one of definition. From the combat to the map navigation, this is a finely crafted, detailed work of mechanistic game tinkerage that frequently forgets to let you see the big picture, whether that’s informing you how a cycle of moves in battle is going to turn out, or simply offering a functional top-down view of the rustic exo-countryside. When you’re ten inches away from a painting you can admire the brushstrokes and pleasant textures. But you can’t appreciate Saturn cannibilising his own child if you don’t step back once in while.

So yeah, it has more than a bit of roughness to it. But hoo boy, do I admire its spirit, its extra-ness, its enthusiasm for small-scale RPG design. It feels like somebody put a lasso around the neck of a snorting Disgaea game and corralled it into a pen with Slay The Spire, the resulting gamefoal erupting onto Steam in slime and wires, a cybernetic child of chaos, pixel art, and giant JRPG word flashes. BREAK. BLEEDING. ANTIMATTER. ENRAGED. By design it lacks the streamlined beauty of the turn-based tacticka that has spoiled us recently. I doubt I’ll be replaying it for as many weeks as I did Monster Train. Yet what it lacks in elegance, it makes up for in frenzy, noise, and a zealous insistence to stuff every possible idea into a bright, stupid world, a world where you can become soulmates with a robot and have a son called…