The shock doesn't wear off. Before you all departed for Christmas shore leave, I wrote about returning to the peculiarly named Star Trek: 25th Anniversary Edition, wherein I expressed the complete bizarreness that comes with hearing the original cast of the TV show reunited to voice, of all things, a point-and-click adventure game. Everything about that just seems so utterly anachronistic today, and yet in its June '92 release it just made sense. It probably still made sense by November '93 when the direct sequel, Judgment Rites, offered exactly same with prettier pictures.

It turns out, apart from the cancelled '97 game Secret of Vulcan Fury, this was the last time the main cast were all together on one project. Which is kind of awesome, really. Kirk, Bones, and Spock, along with Scotty, Sulu, Chekov, and Uhura, all voiced by their proper actual actors (and Majel Barrett doing the computer this time!), in a bunch of new stories that feel like they could have been episodes of the original series. Hooray! I mean, with more idiosyncrasies than a conspicuously quirky people convention.

Judgment Rites is definitely the better game. Where I had to watch how 25th Anniversary ended on YouTube because I am physically incapable of finishing its awful final ship battle, in Judgment Rites you can switch the arcadey sections off entirely. Or have them be easy, rather than hard. I opted for easy, since it's odd to remove their contextual presence, and they were all a cinch. And while there was something excellent about 25th's six stories being barely connected, individual episodes, I can't help but like that Rites introduces an arc that threads throughout the eight tales.

Even better, this outing the rest of the cast gets a lot more to do than 25th's rather derisory couple of lines. A real highlight is a mission in which you take Sulu and Chekov instead of the usual Bones and Spock, and they get to banter with one another, even snipe, as well as offer detailed opinions about the situation. There's even a landing party featuring Uhura, at long last. Mixing that up makes a difference, as the old man grumbling of the blue-shirts does get a bit much after a while. There's only so much of Nimoy's poorly fitted false teeth I can handle in an afternoon. 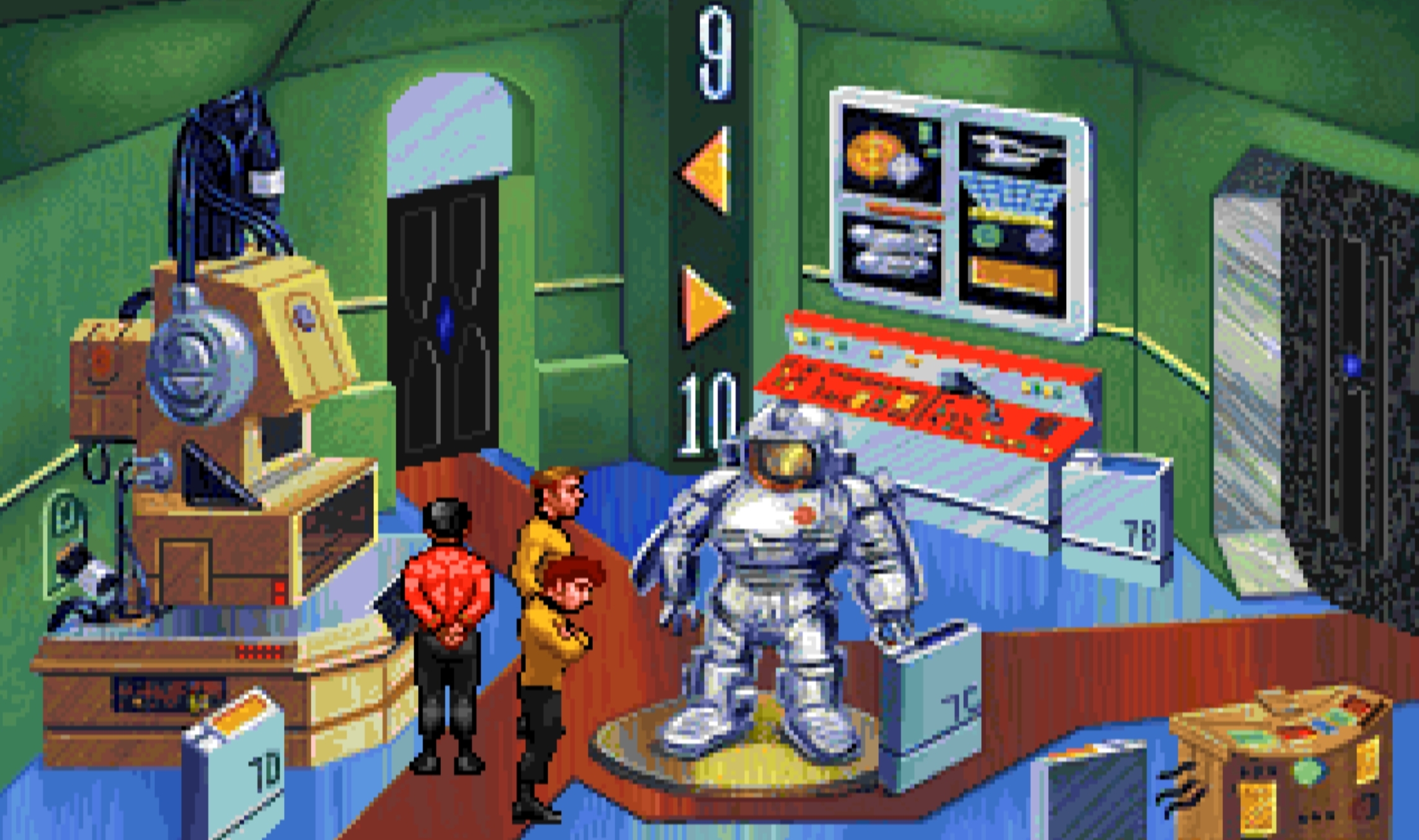 That deep oddness of listening to some men in their 70s pretending to be Starfleet officers in their 30s is a disbelief you really just have to suspend when possible. And when possible never includes a moment that James Doohan is attempting his "accent". I mean, the Canadian's attempt at Scotchish never even vaguely sounded right from the 1960s onward, but by the time his vocal chords had grown to match his ever-expanding tummy, he just sounded bonkers. At 73, he quite reasonably sounds like a 73 year old Canadian man who really can't be bothered with this crap any longer. God bless him.

And it really oughtn't be dismissed that us now living in the Space Year 2020 have the additional perspective of knowing that such a reunion is now completely impossible. Doohan, Kelley and Nimoy are all sadly dead. Takei would rather be dead than do anything Star Trek ever again. And most people would rather be dead than have Shatner do anything Star Trek ever again. Today it'd just be poor Nichelle Nichols and Walter Koenig in a room, being utterly brilliant together, and wait I've just talked myself into wanting this more than anything else. The point-n-click adventures of Uhura and Chekov! Come on! I'd swap the whole forthcoming series of Picard just for that.

In Judgment Rites, the arcing tale is of an unknown alien race called the Brassica (which is just so painfully on the nose), setting tests for the Enterprise crew for opaque reasons. This works especially well since it isn't overt about this. A mission to try to fathom how a planet with only unicellular lifeforms seems to be sending out broadcast signals doesn't immediately present itself as Brassica-related, until its punchline reveal (OMG 26-year later spoilers). Which means you don't feel like you're being cheated out of new stories, but also get a more coherent overall experience, that naturally builds to a climax in the last two stories.

And yes, sure, ultimately this is somehow a game about a race of sentient vegetables deciding if you're morally good enough, and that's incredibly stupid, but this is Star Trek! That's what Star Trek is meant to be. Star Trek is awful, but we like it anyway. Apart from most of the time when it's too awful to like. Most of this isn't too awful to like! 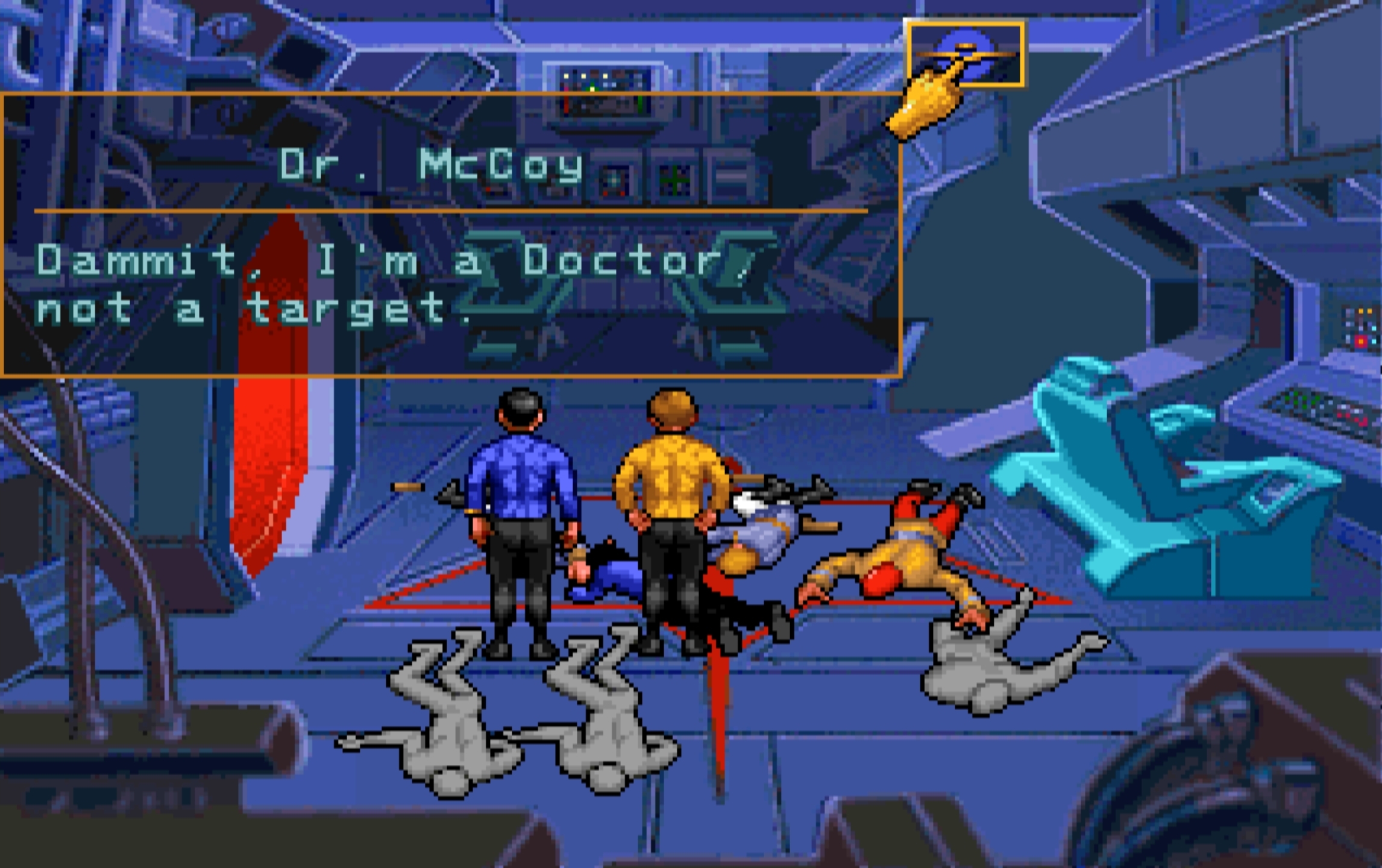 Saying that, it's also in an absolutely astonishingly shoddy state in places. Dialogue is littered with typos (not least in a proliferation of errant "it's"), speech very often doesn't match text, and in a couple of places entirely the wrong audio is spoken! And more than anything, McCoy's lines are read as if a precis of the words that appears on screen, as if DeForest Kelley had gone through the script with a red pen and then shared the results with no one. (Invariably removing overwritten prose to make for a better line, it's worth noting.) At the most peculiar, a line from Kelley carries on for a couple more paragraphs on the screen, but ends with the actor laughing as if he can't bear to carry on reading out the purple scifi goop he'd been wading through. It's an out-take left in the game!

It also has this bizarre habit of only mentioning what an entire mission is about in the single sentence blurt from Admiral Starfleet or whatever he's called right at the start, and then never directly explained again. I swear I spent an entire episode not having a clue why I was doing anything because I'd been distracted during the introduction, and there's no way to have it summarised elsewhere. I'm all for removing exposition, but I'll take a couple of nutshells for when I've accidentally drifted off. 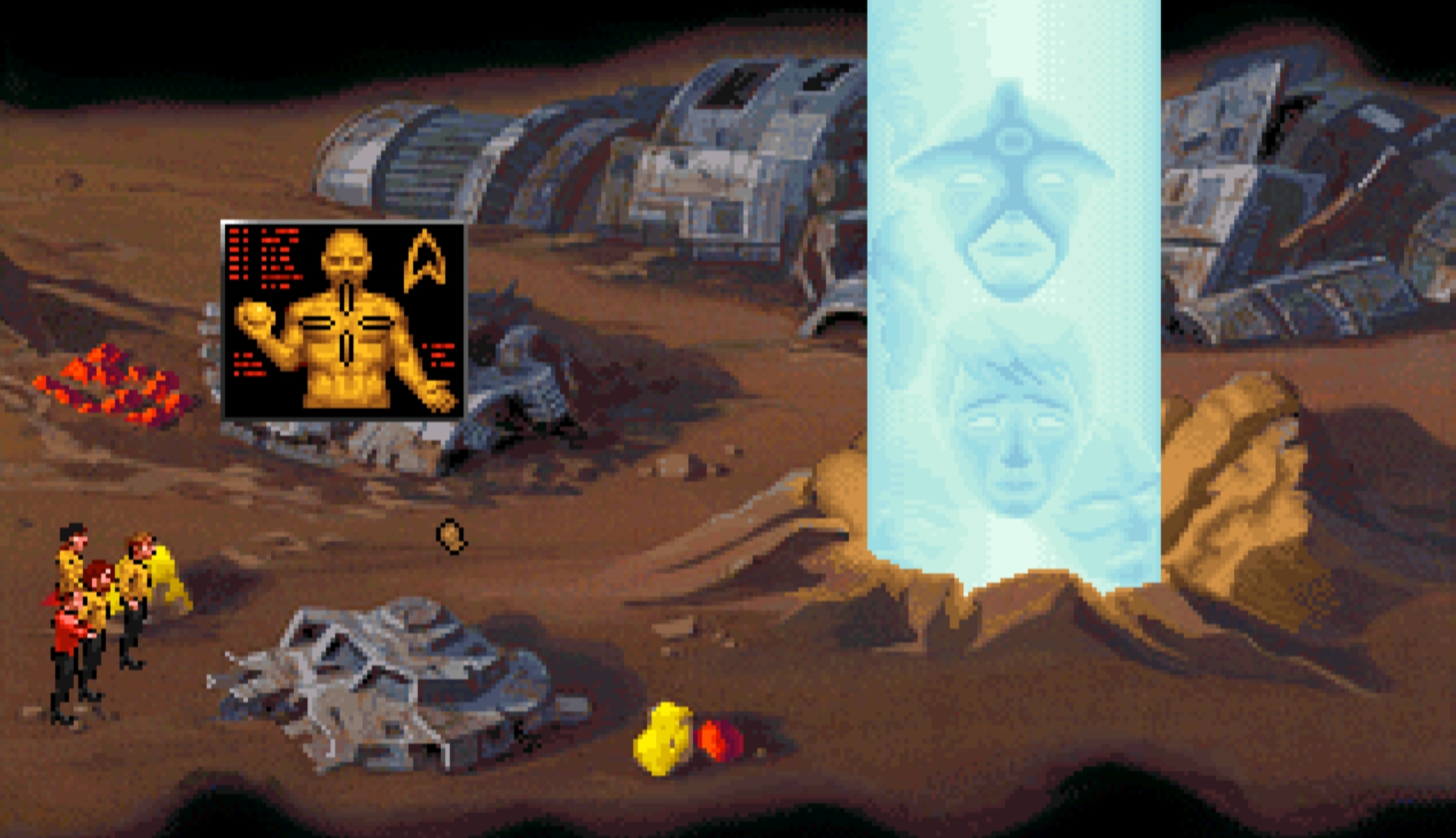 Which is even stranger when you consider how verbose this game is. Once again there's a breathtaking amount of dialogue here, literally for some of the septuagenarians trying to say it all in one go. I adore it for this. I love it when adventure games think of silly things for the player to do, and then write a response to it. I ultro-mega-love-it cubed when they then get a Hollywood A-list star to read it out. And there's so, so much of this, ludicrous paragraphs of wholly unnecessary nonsense for when you insanely decided to try firing a phaser at a potted plant, or pick up a building. Here's a real line Leonard Nimoy reads out loud when I made him scan a table:

"The table is a sturdy construct of manufactured organic and inorganic products, .7366 meters high, 2.2 meters wide and 4.641 meters long. In short, there's nothing special about it."

Here's another, when I forced him to point his tricorder at a lamp:

"The light is composed of a kelvium/magnesium alloy, using an externally mounted argenta power converter to feed from the cosmic rays that are bombarding this station. A most efficient design."

I like to think Nimoy is somehow further aggravated from beyond the grave by my causing these lines to be read aloud decades after he had to say them in a recording booth. What monstrous contract did these poor bastards sign that meant they weren't able to get vocal doubles do all this work for them? And how marvellous it is, because this is such a batshit treat to still have today. 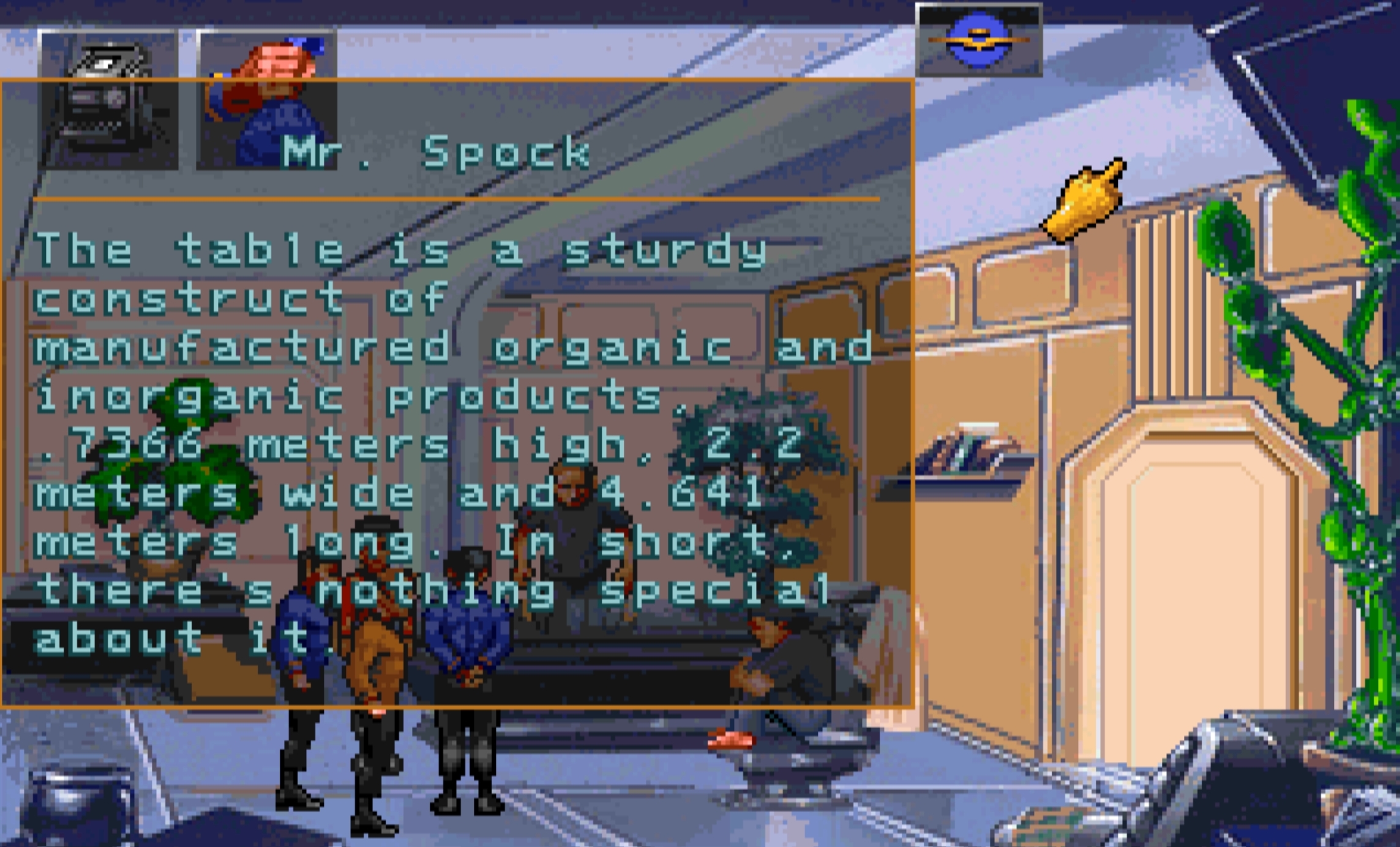 Looking back at screenshots now, even though I finished the game today after playing it for the last three, I feel almost nostalgic! And it's fresh nostalgia, because despite definitely having played this in '93, the only thing I remember is the salad-faced aliens at the end. Oh yeah! The level in the museum, where Scotty botches together all sorts of impromptu tools to beat some terrorists! Aw, back when we were on the Enterprise itself as it was infiltrated by pan-dimensional aliens and bombarded by inexplicable electric storms! All helped by the absolutely lovely painted backgrounds and pixel animation, that I will say now: IS BETTER THAN SIERRA'S. There. Take THAT, Ken Williams.

And I nearly forgot the utterly bizarre WW1-themed German town you sort of find yourself in, in a direct sequel to the original series' The Squire of Gothos, once again starring original actor William Campbell as Trelane. An episode that has a surprisingly bathetic ending. 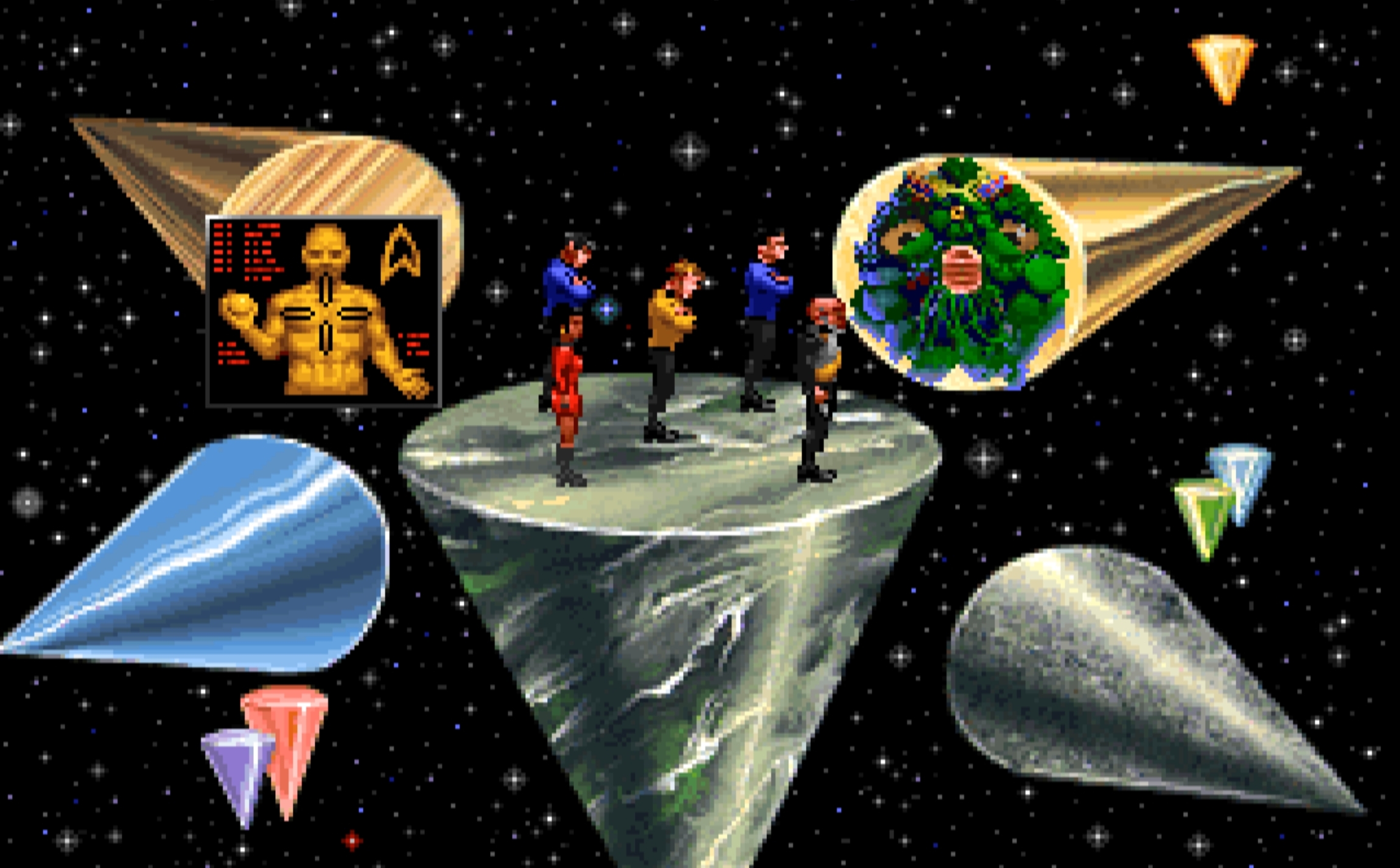 I should probably detail how incoherent so many of the puzzles are, how often I resorted to a walkthrough because of such moments, and criticise the structuring of the storytelling in too many of the missions. (That museum terrorism level is great fun, but would have been so much better if the motives of those involved had been a part of it, not dumped in at the end.) But I want instead to celebrate how extraordinarily open the game is to your approach, how much you can go against Federation ways and still complete a story, albeit with quite the ticking off from your superiors. Each episode has multiple endings, as indeed does the whole game. I love how overwritten it is, both in terms of how dense the writing is, and how ridiculously detailed every answer is. And I love that they do a story on the Enterprise itself, and had the sense to save that for the sequel.

Yeah, yeah, there's so much wrong with it, it's gruesomely lacking in QA to a degree where I cannot believe Paramount cleared it for release in their name, and if I were reviewing it today I'd have the tiresome slog of needing to point out how flawed so many of its puzzles are. But I'm not, so I don't. Have a walkthrough next to you, don't feel guilty because that was normal behaviour in 1993, and just go enjoy the time capsule of madness that it is, an unrepeatable treasure that could only have ever existed in that brief window of time. And never forget: PIG + X = COW.

Definitely. It's on both GOG and Steam, running on an in-built DOSBox.

I really think so. Play 25th Anniversary first, to get the full experience, and indeed to appreciate the big jump forward in graphics between the two.