I want to explore. Like, everywhere. I didn’t expect that to be the main takeaway of my Star Wars Jedi: Fallen Order hands-on preview, but here we are: amongst the windswept vistas of Zeffo, or careening down its ice caves, or clambering around the crumbling red stone of a temple on Dathomir. The team behind Titanfall 2 have built some more beautiful worlds for me to jump around, where I don’t simply hop from A - B.

You won't catch developers Respawn Entertainment doing this, but I’m going to compare their upcoming space magic franchise action-adventure game to Dark Souls. A pepped up version of the From Software formula. I’ll move on pretty quick, promise.

Producer Kasumi Shishido told me that “There isn't one specific game that we can compare it to”, but that’s a bit silly because you can very easily compare Fallen Order to Sekiro. It’s obviously more forgiving, not nearly so intricate, and far less opaque. But there’s a familiar core of tense combat and stress-relieving shortcut, combined with poking into places where you’re not wanted and uncovering their mysterious pasts.

Plus, this is Star Wars. That means a lot to some people. I don’t mean to be dismissive, but illuminatory. I like Star Wars! It is fun! But I’ve never been in love with it. This isn’t a universe I cherish, and so I’m more inclined to see what Respawn’s building on its own terms. The good news is that it holds up to this view in more ways than it falls down.

Zeffo is probably the second planet you’ll fly to in the main game, though to some extent the order is up to you. I was told I could instead jump straight to Dathomir, but was warned off it due to the more intimidating locals, so I spent most of my three hours on Zeffo, which was a pleasure to gambol around. Respawn have an eye for small details, like interrupting two wolf-like creatures as they tear a dead stormtrooper in two. Or wriggling through one of those narrow rock channels that videogames are fond of, but watching Cal (though Blando Calrissian still feels an apt moniker) athletically twist and shimmy rather than simply plod forward. 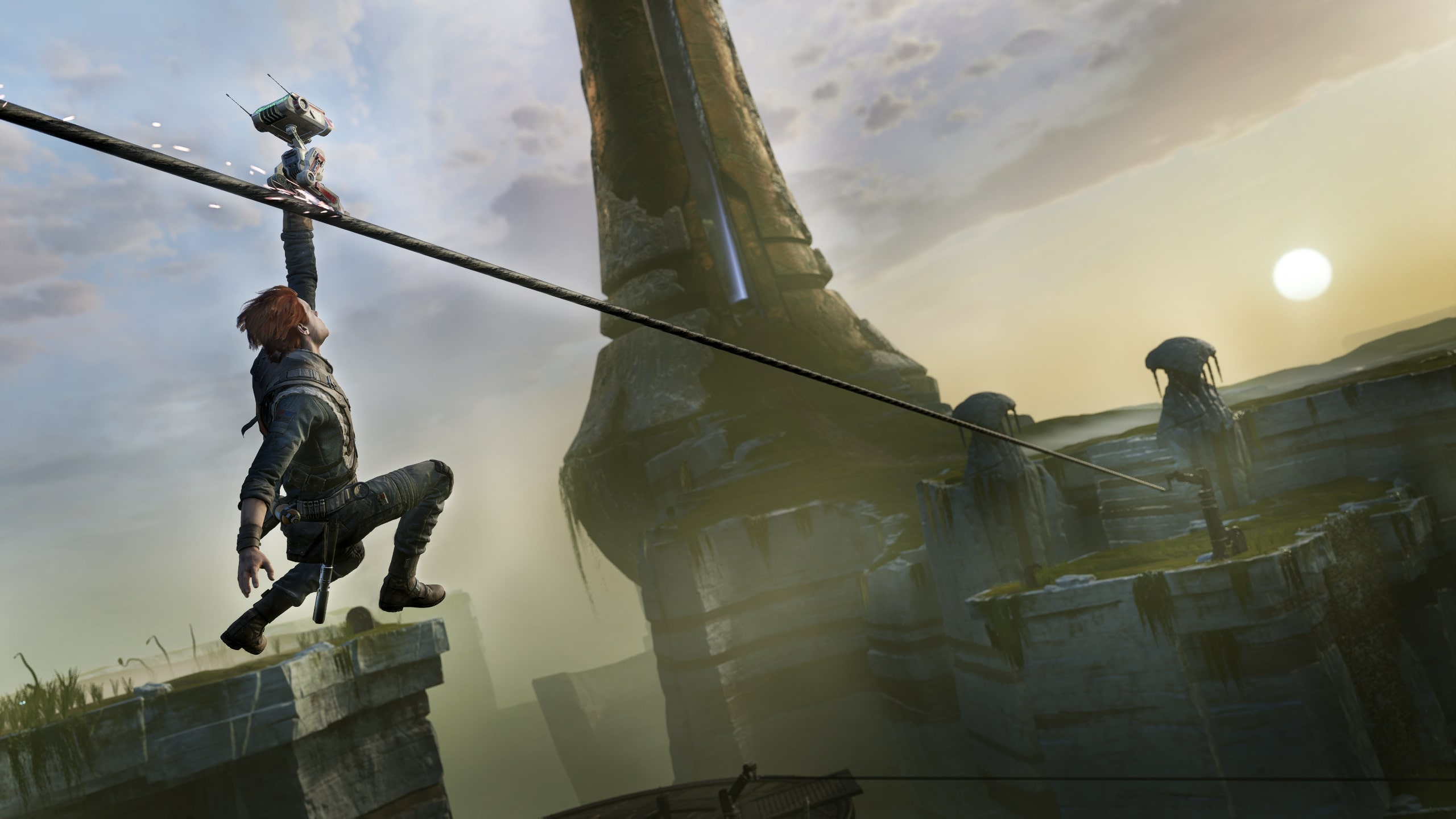 A Jedi does not plod. A jedi leaps into the air while manipulating time, trapping wind turbines and improbable cliche-sized crushers into platformable objects. Memorably, at one point I froze a spinning horizontal cog, only to dither on it for too long and get catapulted to the bottom of a nearby cavern. This kind of inventive yet fiddly platforming could be nightmarish, but fortunately falling into caverns and the like only nibbles at your health bar.

This is one way Fallen Order manages to be gentle, while still malleably taxing. Changing difficulty levels lets you see what’s actually adjusted: how aggressive and hard-hitting enemies are, and how long a window you have to parry. Removing a pointless obfuscation like that is neat, and has me slightly unfairly wishing I could adjust each of those values manually. I do hope this starts a trend.

It makes sense that changing difficulty would impact parry timing, as successful parrying usually marks the difference between a jedi or a deadi. It’s this emphasis that sparks my Sekiro comparisons -- combined with the way you need to chisel through block metres on human enemies before you get to ram your lightsaber through their chests. You’re also similarly nippy, and encouraged to bounce between enemies with an expanding, unlockable move set. 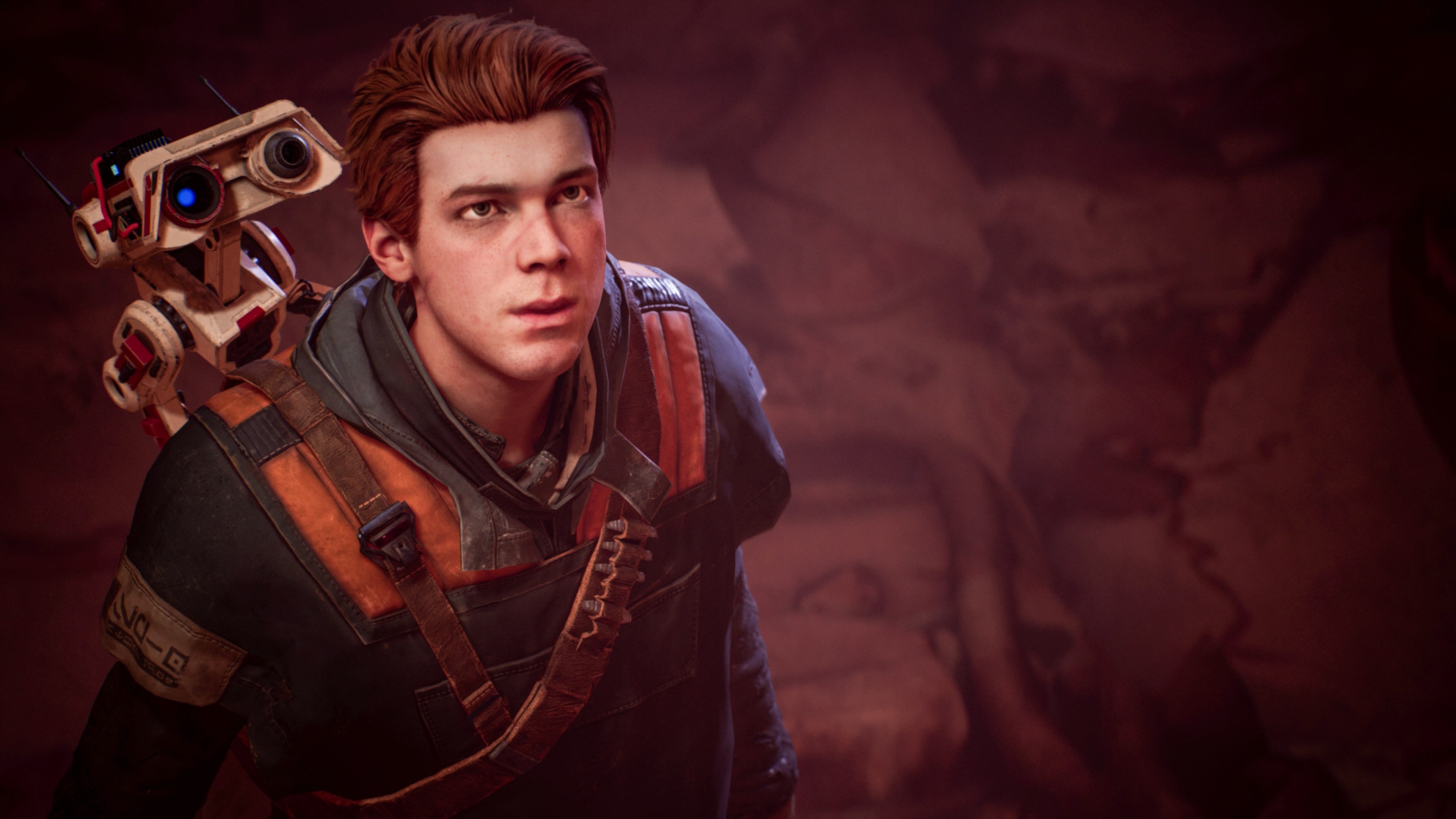 I earned these at a fairly swift pace. While I expect that will slow down in later sections of the game, there is always the allure of new force powers. I got a taste of this on Zeffo, where the ‘critical path’ eventually lead me to the bottom of an ancient temple. Light puzzling ensued, until something wibbly and spoilery reminded Cal he could do big force pushes. These became a useful tool in both combat and exploration, with some classic ‘guide the big ball to the big ball slot’ problem-solving. This is also how Fallen Order functions as a metroidvania, with my newfound ability to force push through walls opening up new areas across the planet.

It works, largely by plastering over that classic metroidvania problem where you don’t know if your inability to progress is due to a lack of tools or wits. If an obstacle is glowing red, you need to come back to it later. This transparency extends to the map, where traversable routes are handily shaded in unexplored yellow. That map often needs scrutinising, but provides the right level of resistance to my brain’s poor sense of direction. On the few occasions where I got properly stuck, I could ask BD1 for help.

I’m still a bit resentful over how cheaply my affection can be won with a bleep and a head-tilt, but my heart can’t hold that against Cal’s lil' backpack robot buddy. When I got the chance to chat with writer Megan Fausti, I seized the opportunity to bring up the historic mistreatment of droids within Star Wars. They’re treated as comedic relief whose sentience is recognised but ignored, with untold suffering inflicted on them. This has been noted and discussed, Fausti reassured me, and BD1 will not be treated the same way. 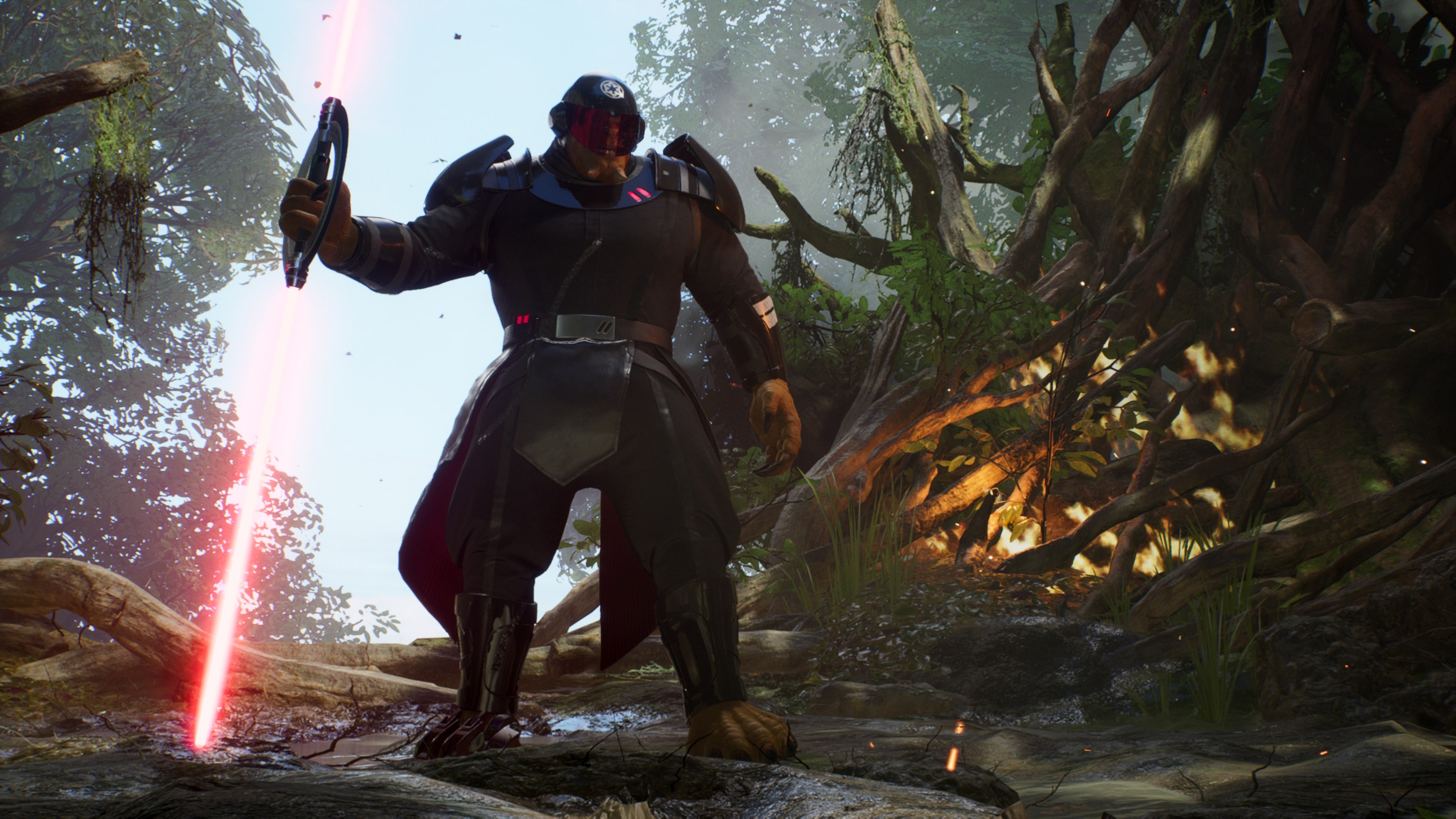 “He’ll be OK!” she said. “The senior narrative designer who works on BD1 was very intent on making sure we took that sort of thing into account. We wanted to make sure that BD1 feels like a person. Someone you can talk to and have a conversation with, and not just used for punchlines.” I am glad. He’s still one of those droids that talks in that puppety, whistle-beep fashion where humans have to translate everything he says, but I will happily watch him whirr and coo.

I’m less enamoured with Cal, who reminds me of an early, stroppy Luke Skywalker. I asked if that resemblance was deliberate. “A little bit,” Megan told me, though she was keen to stress their differences. She pointed to Cal’s past, living through Order 66 and the jedicide. “He's going to mature faster than Luke does,” she said, though they’re deliberately avoiding a “hardman concept”.

I haven’t seen enough to say this definitely, but I suspect I’ll still struggle to get invested. My worry is that events and characters will lean too heavily on archetypes laid out by the films, and the license will wind up creatively stifling a team that was previously free to dream up time-folding super weapons.

Fausti and Shishido didn’t see it that way, of course. “We work with a lot of people who try to get to a yes rather than telling us a no,” Fausti said. “That makes a big difference.” 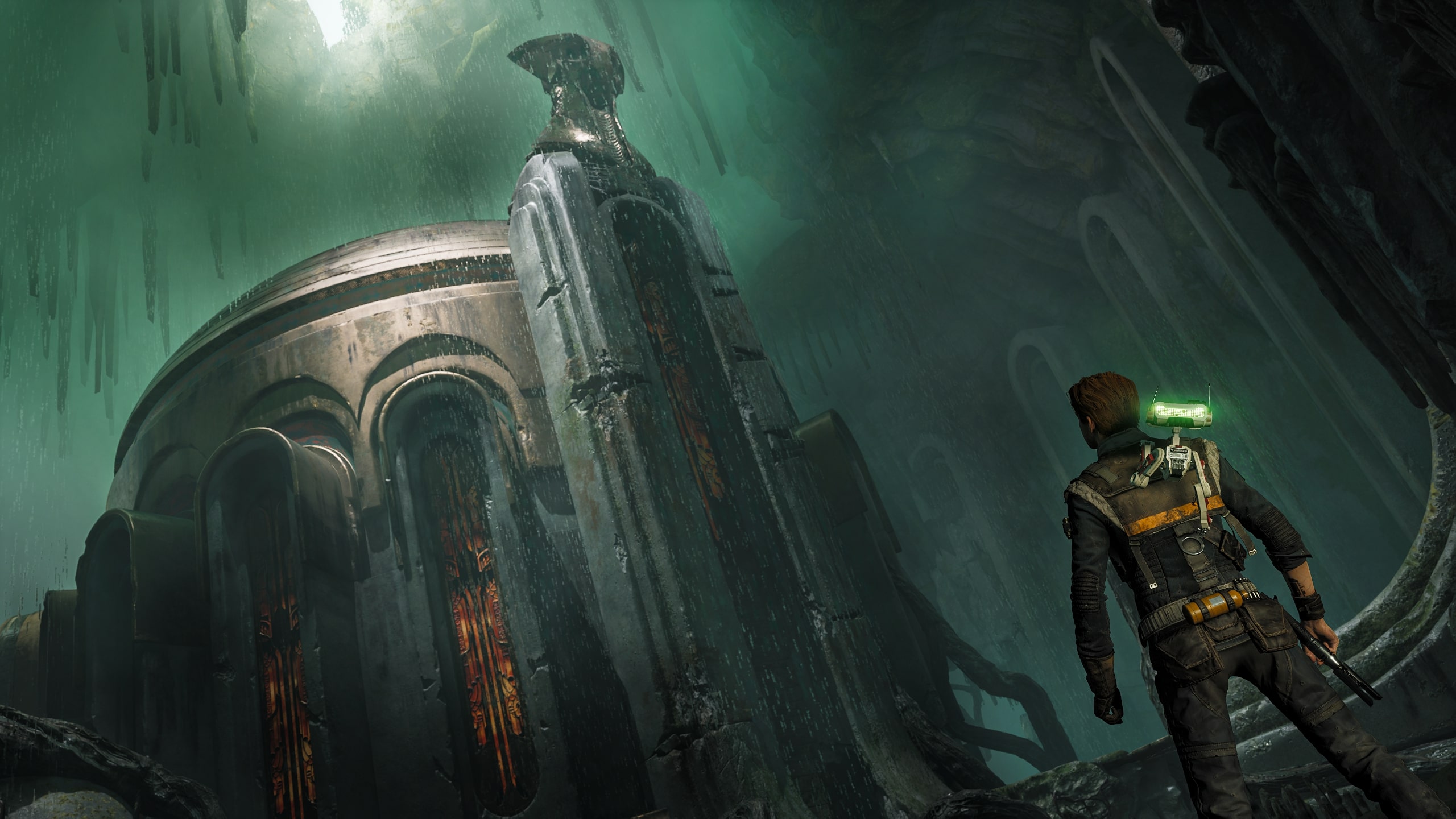 It’s a nice sentiment, and one I hope to see evidence of when the full game comes out next month. But I wasn’t given especially inspiring examples. The greatest strength of Titanfall 2, I put to them, was its willingness to put new toys in your hands then rip them away before they’d outstayed their welcome. I was told “big Star Wars moments” like the appearance of an AT-AT serve the same role. “They’re one of a kind,” Fausti said -- but for me that response is emblematic of the problem. I have seen plenty of AT-ATs. They have ceased to be surprising.

That said, the over-familiar sound of an AT-AT isn't a death knell. I am perfectly happy to be tugged along by a plot I pay little attention to, seeking out new worlds and powers rather than story-based catharsis. This may not be a universe I cherish, but spending time in it does have a cosy appeal. A star destroyer can still enhance a vista, even if part of me would rather spy something more alien.

With compelling combat and exploration, Jedi Fallen Order might not need the truly new. Especially if it treats its unavoidably-endearing robot well.