Valve have added new options to filter obscenity and slurs from chat on Steam and in some games, letting you level up without getting cussed out. With the new Steam Chat Filtering enabled, words caught in the filters are replaced with "***" or "♥♥♥". The new options are pretty deep, letting you upload and download your own lists of banned words, see foul language from your friends but no one else, and more. Or, if you want, you can just leave it off and see the same chat as ever.

Valve originally created this filtering system for games like Counter-Strike: Global Offensive, Destiny 2, and Dota 2, and now have made it a feature of Steam itself. This means it also applies to Steam Chat, it can be used by other games which choose to use Valve's system, and it uses the same options and filter lists across them all. This new version debuted as an experimental Steam Labs feature in August for a spot of testing, then became an official Steam feature last night.

People who cuss still see the words they've typed, but other people with filters enabled will see symbols instead. Seeing someone call you a *** instead of an eejit (or equivalent grown-up word) doesn't exactly hide their uncordial intentions but it's something. I mean, I disable text and voice chat in most games anyway, but I'm glad to have these option in games where I still use it. Giving people better filtering for more power over what they see is good, though frankly I'd be happy if Valve slammed down a shedload more bans too.

Valve have pre-loaded the system with lists of words they think are profanity and slurs, then you can add more yourself - even by uploading a list in a txt file. You can download your own list too, perhaps if you want to share it with pals or a community. The full options are: 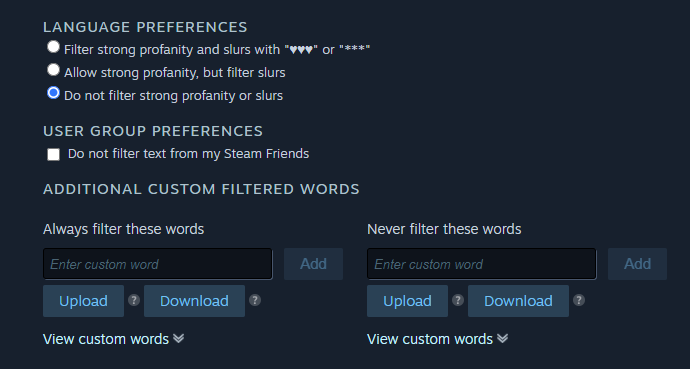 "We know marginalized groups can reclaim language for themselves, and we don't want to stand in the way of them from doing so when chatting with one another on Steam," Valve say, explaining why they don't outright ban the words on their lists. "Additionally, feedback from our Labs experimentation corroborates that context matters, and that strong language is often received differently when shared among Friends. So players have an option to obscure profanity and slurs from their Steam Friends, but we've disabled this by default."

To fiddle with the options yourself, head into your Steam preferences. Or don't, if you don't want to. Everything can be as before if you so desire.