Valve have decided that Halloween is the perfect time to kill off the old Steam library, replacing it with a more customisable screen for your games collection. I hope that doesn’t come back to haunt us, because I can’t handle being chased down a dark alleyway by the angry spirit of the old UI. The old library screen is dead and replaced by a new screen with a number of ways to search and sort your games, a main screen that gathers all the latest updates, and more.

They've also released Steam's new Remote Play Together beta to everyone as an extra treat.

Valve's blog detailed the changes, which is good because I’ve had the new update for a while, but this is the first time I’ve looked into what it can do. I’m one of those people who has a 15-year-old collection of games on Steam, and it is a vast and unwieldy thing.

The main library window is now a mixture of what you and your friends have played, what's new, and what's been updated by developers. Along the top you can see updates to games, and as I was scrolling I discovered a game called 1001st Hyper Tower had just updated, which I'd forgotten I added to Steam a month ago. I've just installed it.

Learning that I can create a dynamic list from a number of filters has some real value to me. Search parameters can be selected from the usual list of genres and features, but it can also take in the suggestions from Steam’s tags. If I fancy playing a single-player walking simulator that I’ve already installed, I can search for those. 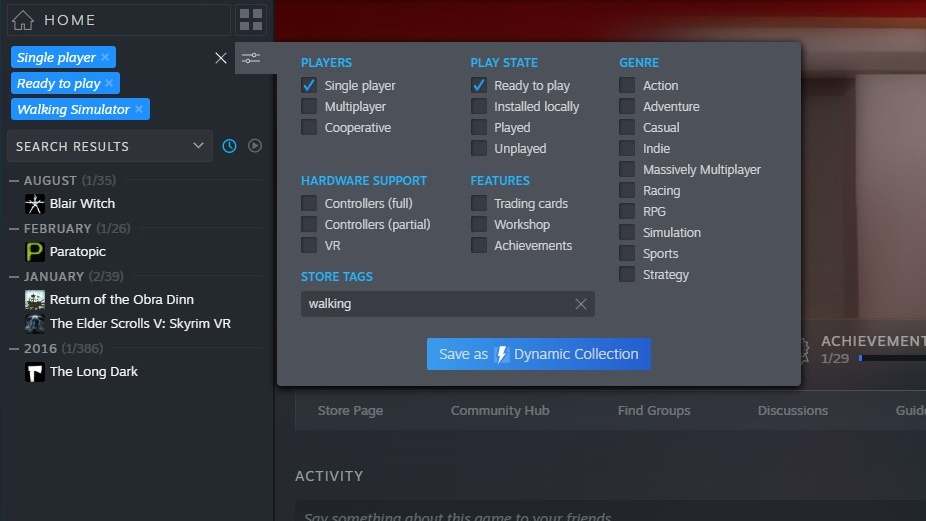 And now I know that I can play the Long Dark, which is a neat thing to discover. I can dig around in my Steam sandbox with a lot more purpose than before, and not just scroll endlessly then launch Overwatch for the kabillionth time. Now I can see if there's such a thing as a loot-based, RPG driving game that I'm in the mood for (there isn't).

The main window can be tweaked and fiddled as well. You have "shelves " that are populated from categories like "Favourites", "All Games", and the like. You can add and delete the shelves according to your tastes. I just deleted everything but my favourites list.

You can create a collection of games and then drop that collection into a shelf on the main screen. I tried that before and it felt too much like house-keeping. I completely understand that it's useful to plenty of people, but I prefer to live a life free from boxes and labels. I'm a free spirit. I can, however, save any searches as a dynamic collection, that will keep a few parameters and update itself as my library grows. If I do find that loot-based, RPG driving game, it'll immediately end up in that box. 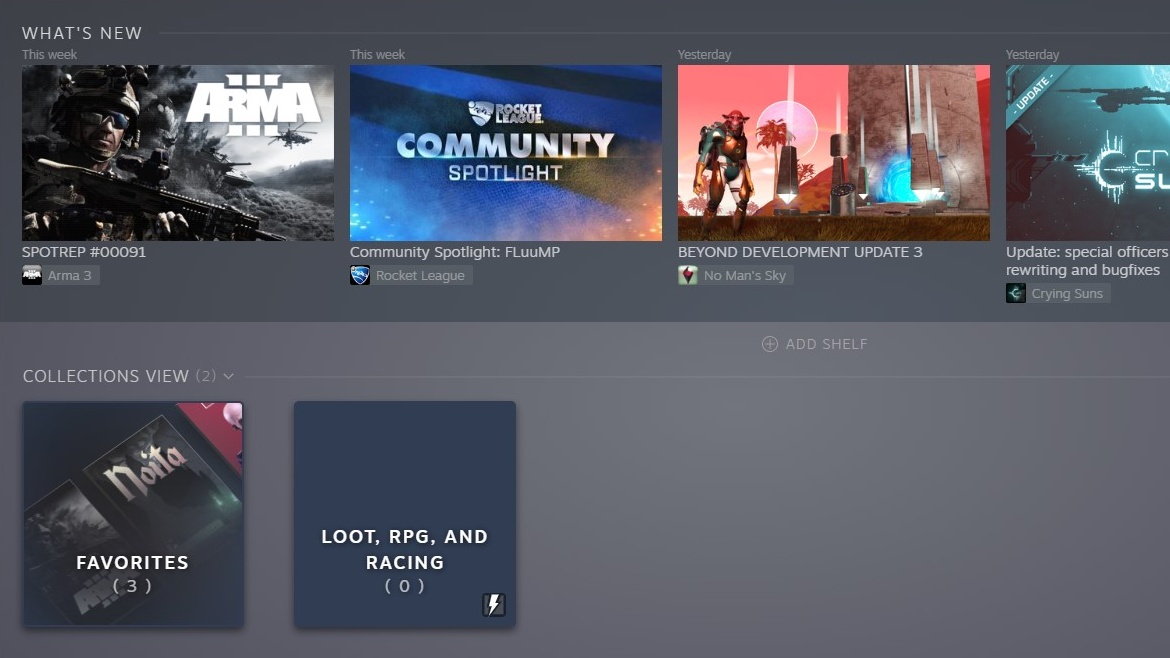 I'm digging it. I still wish it was easier to move the elements around on the main screen. You can move your own shelves around, but "What's New" is stuck hard and fast at the top of the screen. I'd like to be able to move it all.

Also added is Steam's Remote Play Together feature that lets people play local multiplayer games online. It was on a separate beta branch, but now you don't need opt-in. You can play any of the supported games by launching one and inviting someone from your friends list to join you.

Doing this during a Steam sale is very cheeky of Valve, and probably some sort of social engineering thing to get people to use the library with their new pile of games. I see you, Valve.