Subnautica is an underwater survival game about crash landing on an alien planet and becoming best mates with its fish. It surfaced from early access this week and John and Brendan have both been for a dip. Here they share their thoughts on leaky bases, scary whales and the urgency of an alien flu. Note: Spoilers to follow.

John: Here’s a thing. I think it’s impossible to discuss Subnautica - the Official Best Survival Game Ever Made - without spoiling it. Like, if we say anything beyond, “You crash on a watery planet, and there are some fishies nearby,” then we take away from the reader the experience we both had approaching it. So what I say is: if you haven’t played Subnautica but want to, bloody well go play it and stop reading this nonsense. For everyone else who has, or needs convincing, we’ll say some other stuff.

Brendan: I agree with all of the things this man is saying. If you don't care about spoilers, read on.

John: So can you believe it when it turns out the fish is your dad?!

Brendan: It’s the best twist since that other game about being trapped under the water. But you’re right when you say so many of its best moments are the surprising ones. The first time my Seamoth submarine was grabbed by a nasty sea monster, the Reaper Leviathan, who angrily shouted at me in its own fishy way--

Brendan: -- yes, like that. The first time that happened, I was clicking like a loon and shouting “oh no” over and over again until he let go of my mini-submarine. I didn’t go back to that part of the ocean for a long time.

Brendan: I survived by the tiniest bit of health.

John: I survived! But he ate my submarine to bits. 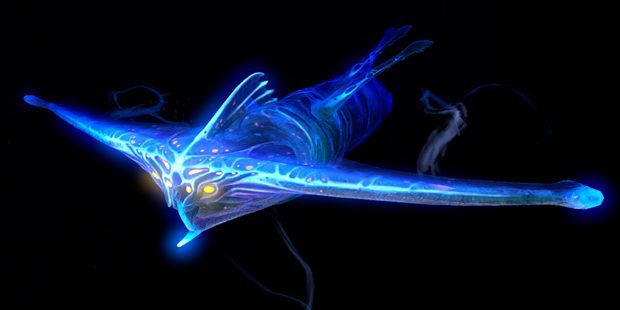 Brendan: There are lots of other scares like this, and not all of the creatures that freaked me out turned out to be nasty. The gentle Reef Backs scared me witless when I first heard their giant whale-like groaning. But when you approach them, they just slowly keep swimming, barely even noticing you, and you realise that even if a creature looks or sounds scary, you should still go and scan it to find out if you can be friends. Except bone sharks. They're awful.

John: I hate the bloody teleporting bastard thing. Good grief. It’s the worst. But yes, I love the Reef Backs now. And I don’t mean, “Ah, they’re nice.” I mean, I feel a sense of safety and protection whenever they’re near, even though they afford me absolutely nothing of the sort.

Brendan: Yeah, they are like your really big mate at school who never fights but makes you feel safe just because he’s giant. How do you feel about the story? Because you were asking me some things about it in the early moments and I didn’t want to spoil anything major. But now I think you may have passed that point.

John: I really like it. What I love so much about this game is it fulfills every wish I’ve ever had for a survival game. It’s about being ingenious (pretend ingenious, clearly), about making do with what you can find, and yet somehow going from stranded in the sea to Robinson Crusoe, all the while offering this background tale with which you can engage as little or as much as you like. And it so carefully guides you through the unfurling of new tech and abilities as you follow it. 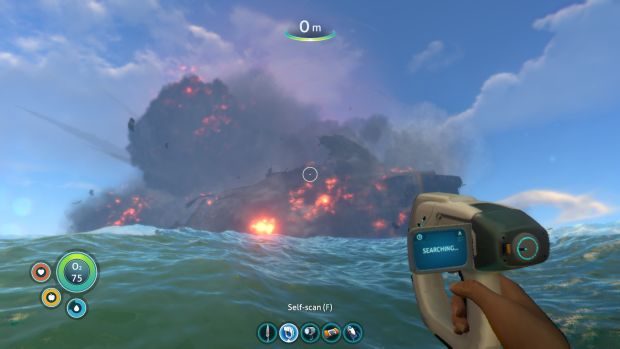 Brendan: The story bits are odd, though, in that they make things feel urgent when nothing really is. One radio message might say: “Uh oh, the ship’s drive is going into radioactive meltdown in 48 hours”. Or your computer might say: “You’ve got a bacterial infection and it’s getting worse, bub”. Those messages can make new players think: “I probably have to do something about that!” But there’s nothing in the plot that will kill you outright or end the game prematurely (at least, as far as I’m aware). It didn’t bother me, once I realised it’s just pacing for pacing’s sake, but I think some people might feel it inconsistent, or artifically pushy.

John: It is definitely a bit confusing, but like you say, it didn’t bother me either. And indeed there are some elements that are genuinely timed, and then there’s a countdown clock on-screen.

Brendan: It’s a classic video game problem - telling you something is urgent - the kingdom is in peril! - but then giving you infinite time to work up to the final encounter. If you’re used to it, like us, it won’t really annoy you. But it is something I only noticed when you were asking about those early radio messages.

John: I suspended my disbelief for the sake of having quite so much fun.

I really adore how it does away with the perennial issue of how silly it is to craft a speedboat from some bamboo and vines, and says, “You’ve got a magic machine that reconstitutes things on a chemical level”, so you just have to find items with the right chemicals in them. Done, perfect.

Brendan: That machine is God. I’ve spent more time in early access than post-release, and one of the most distressing bugs I had was when my lifepod - which houses this magic machine you’re so reliant on - just floated away from its normally fixed position. It drifted off at a nightmarishly slow rate, until it was off the map. Luckily, I had built another God machine in my undersea habitat by this point. But it was still unnerving to see the thing that helped me to survive for so long drifting off into the horizon.

John: Talking of undersea habitats, when it introduced building I thought: “Ah, here is where it loses me.” Because that’s where all these games always lose me. They go from scarcely surviving on what you can scramble together, to asking you to build a small village complete with cinema. And it all gets too much of a muddle, to many parts to juggle… Except, that didn’t happen. Instead, I’ve built this amazing complex, and I have a double bed, with toys on it, and posters on the wall, and an ironic fish tank placed immediately next to a window. And none of it felt a tiresome fiddle (well, the building mechanism is a bit shit, but that’s not the sort of fiddle I mean), but instead a natural progression of the fun I was already having.

Brendan: Yeah, everything has to snap to a very strict grid, which can be annoying sometimes. But it’s easy to get over that once you’ve built a giant desalination chamber above your underwater greenhouse, and a scanner room which highlights all the quartz you need to make that glass observatory you’ve always been meaning to add.

John: Have you ever had the building start to leak? It is THE WORST THING IN THE WORLD.

Brendan: Oh my word, I had forgotten about that. It’s excellent. Just a panicked scramble to repair all the holes. I once had a disastrous flood and after I got the whole place back up and running I built watertight doors between every section of my base. I always closed them behind me from that point on. I feel like these kind of experiences and decisions will be shared by almost every Subnautinaut, but in the moment of making a plan for your home and committing to it, it does feel like you are the one coming up with all the clever ways to get by in this sometimes-hostile world.

John: It’s simply splendid. I only want to play this game and nothing else forever now. Years ago, I wrote this piece for the site about what *I* wanted from a survival game, and how none of them have ever offered it. Subnautica offers it. And I love that it even gets food and water right! They go down at a sensible pace, and they’re readily available! (To the point where, I must confess, when I restarted last week I left it off, just for the convenience, because it didn’t really inhibit anything.) It’s a game that lets you feel safe amongst threats, clever in the face of danger, and like a proper brave explorer.

Brendan: It’s such a balanced adventure. There’s threat and peril, but also relaxation and serenity. There’s a plot, but not too much. It’s a game survival game developers ought to learn from. And I don’t mean they should think: “Oh, let’s set our survival game underwater!” I mean they should think: “How do we approach survival with similar moderation and lightness?” In short, I like it. I think it is good.

John: I concur. Thus it is so. Everyone must buy it, or else.