The word 'lonely' comes up often when discussing Sunless Skies, which seems like an odd thing to say about a game in which you haul yourself around the stars in the company of up to two-dozen crew members. But that's the tone of Failbetter's twisted sci-fi Victoriana roguelike: feeling desperately alone and vulnerable, in a desperately large and lethal place. Those crew? They're all nameless, faceless, hired only to die on your dime. In Sunless Skies' merciless vacuum, care is a luxury you cannot afford.

But fellowship seeps in though hairline fissures in your emotional hull, slowly but surely. Those poor crew will never be more than a quickly forgotten statistic, but their Officers (those inscrutable, damaged, openly Machiavellian characters who are sometimes actual rodents) can be pressed into senior roles aboard your ship, and are permitted a sliver of the captain's attention. That's the British class system for you.

Nonetheless, this company of sadistic princesses, devils on the run, treasure-seeking rats, fungal-controlled engineers and uninvited aunts are what most make a game about slowly dying in an airless abyss feel, well, human. 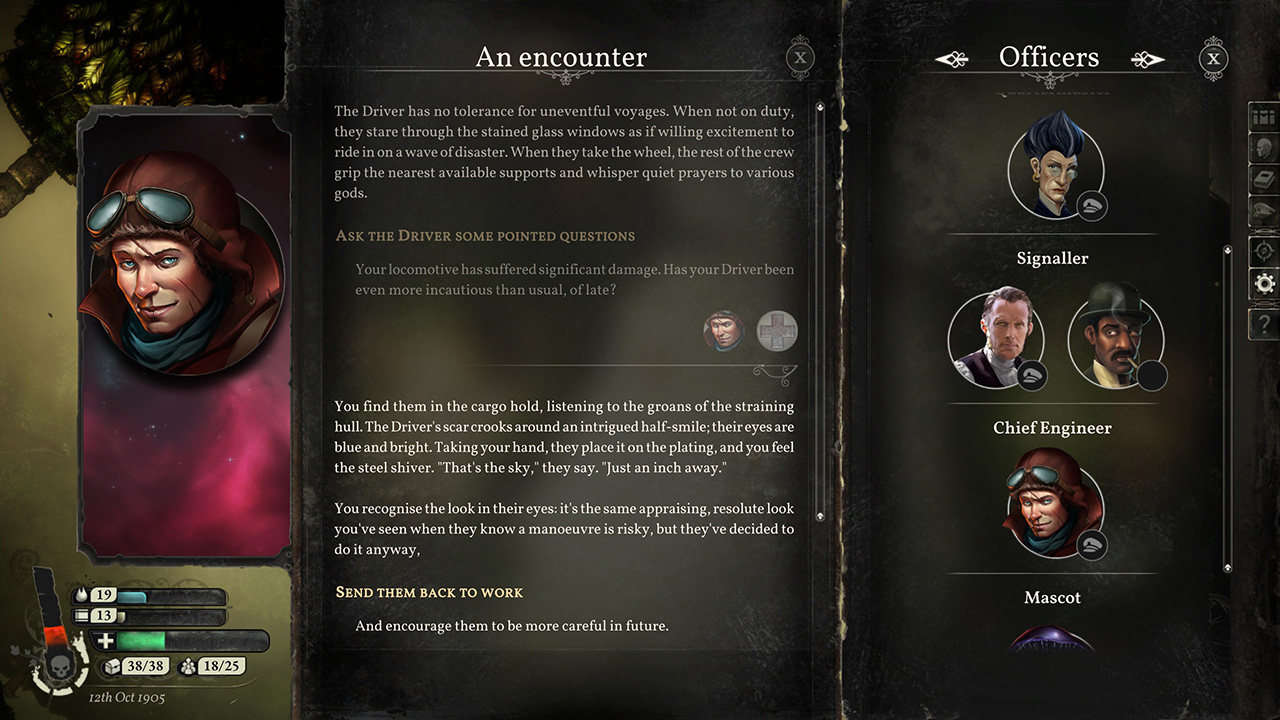 Officers are NPCs who, if found and recruited, bestow big bonuses upon your key stats. They can be thought of like party members in an RPG. They make your journey more survivable, but more importantly they are constant companions, offering sporadic commentary on the places you go and the deeds you do.

A cautious lament from The Incautious Driver when you once again litter the skies with the corpses of your enemies. Your usually unflappable Inconvenient Aunt solemnly downing sherry as the sights outside the window grow ever more harrowing. The Incognito Princess demanding that you burn your own books to keep her warm as the void steals the ship's last heat away. The Rat Brigade who wants to drink and gamble. They can be a riot, in the right mood. 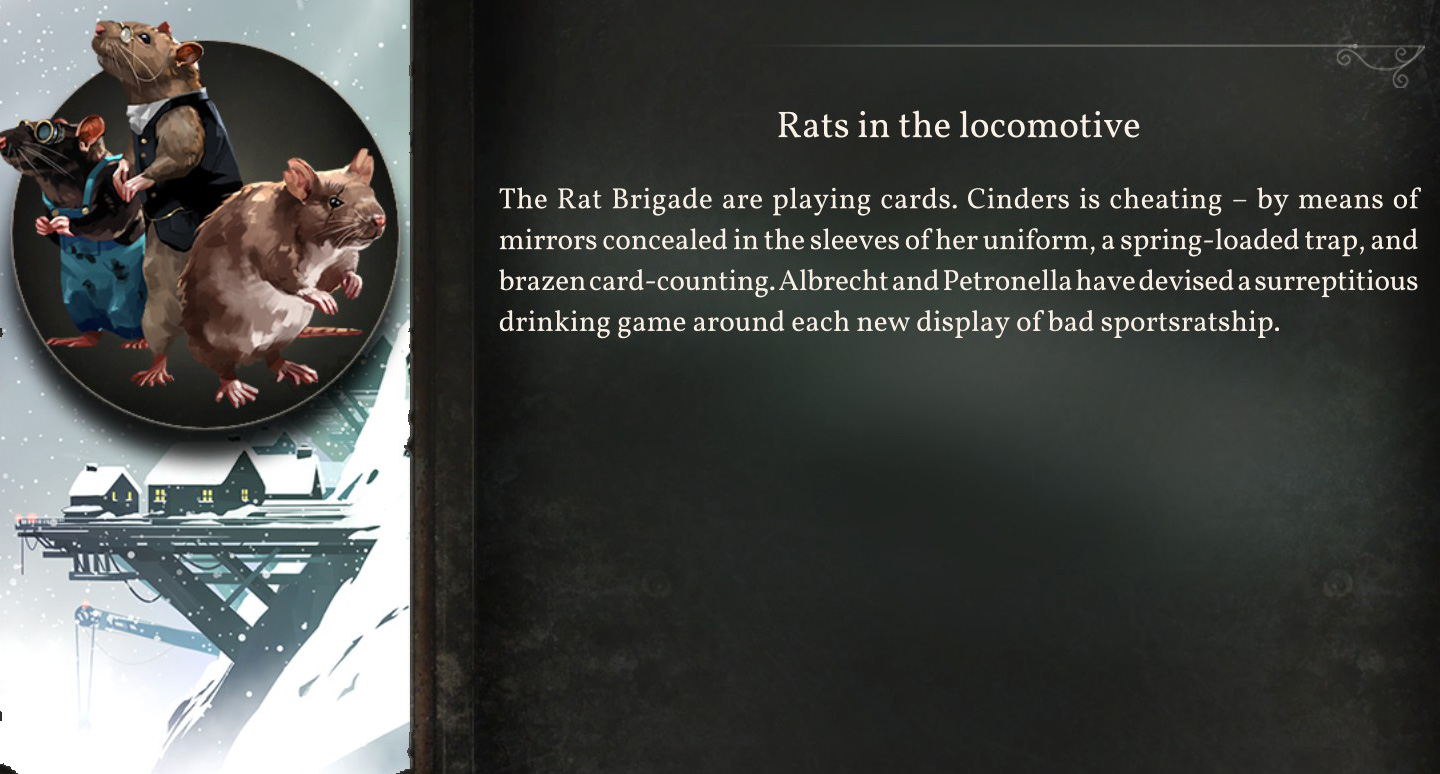 To travel the stars with a full complement of Officers is an appreciably different experience to travelling alone. It's an appreciably warmer one too, even though most of these people are either sufferers or perpetrators of great tragedy. Their lines, overlaid at random on space itself as you trundle vulnerably across it, are often judgemental, but I think that is why they are so comforting.

To know that I am seen, to know that my actions are witnessed, considered, and thus not done only for some ephemeral reward. And to know that, on this ship of the damned, otherwise staffed only by that silent two-dozen crew whose number is constantly diminished by disaster and replenished by gold, someone has permanence.

This permanence is in the ties to the worlds around us - ties I do not myself have. I am free, beholden only to my ambition of wealth or fame or, most of all, survival.

Each Officer has a story, one which, should I choose to pursue it, will take us all over this galaxy, meeting the people who matter to them, or once did, the people who hate them, the people who know their secrets, the people how hide their secrets. Even the rats, a gaggle of ex-military rodents who I can hire to keep the engine stoked, have friends scattered across the stars. That's more than I can say for myself. 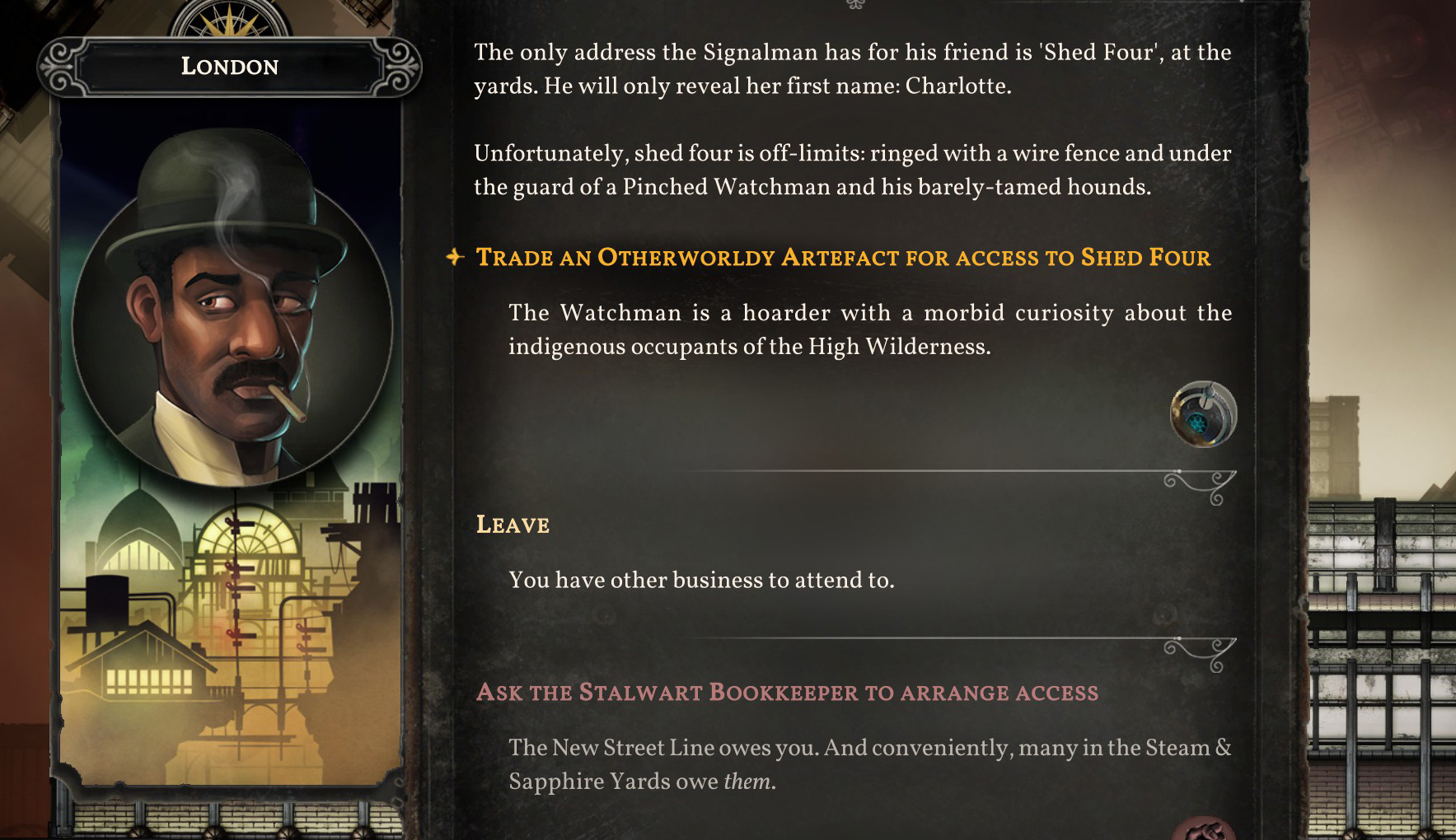 But the Officers become my friends. Oh, I might encounter some gratitude, here and there, for the denizens of ports and monasteries and pubs for whom I perform favours in my travels, but they have nothing else for me after that. The Officers stay with me, even as I chase down death time and again. Some of them become friends. Some of them even become lovers. Others sow carnage wherever they go, which I pretend not to take great delight in.

Their most important role, however, is to grow connective tissue between what can otherwise be a disparate universe. The assorted stories of Sunless Skies are a library of different fictions within the same overarching theme - the British empire's conquest of the stars. Which at times threatens to make its various ports feel like isolated vignettes, all delightful terminology and no trousers. The Officers' tales crack some of these places open, inviting me in to see how they function and what they mean, beneath a surface made from pretty phrases and apocalyptic names. 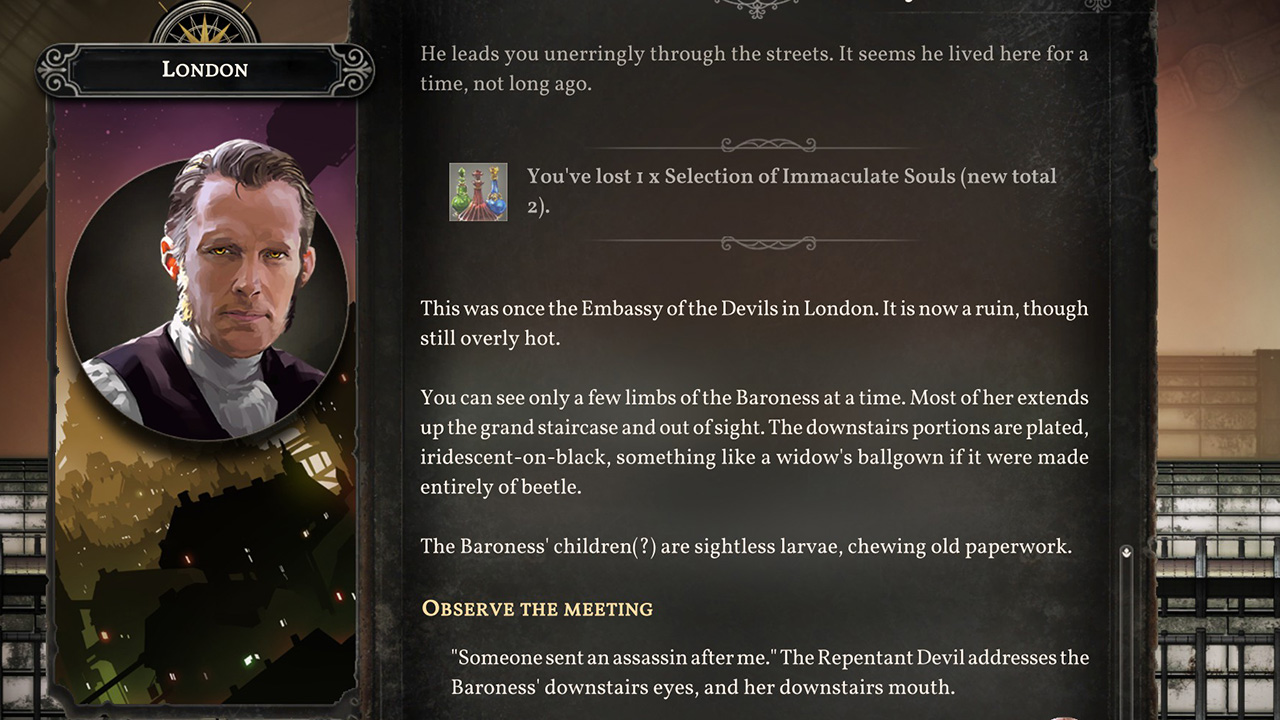 The Repentant Devil, when not coolly presenting me with the bodies of would-be assassins who somehow made their way aboard our ship, shows me what it is a Devil does, and an industry dedicated to penance and the cleansing of the soul - souls being an important currency of sorts out here.

The Incautious Driver shows me the unspeakable dangers that lie in the farthest reaches, and offers me a rare layperson's view of war, engines and the skies. The Fatalistic Signalman is inches from death, but he has work to do. Work that will take us everywhere. Work that benefits everyone. The Inconvenient Aunt, when not solving crosswords or chastising me for this or that, ushers me behind the veil of High Society, to watch the elites cavort - and to see how sedition might be sowed. And to reveal one of London's darkest secrets. She begins with all the fun of a hectoring stereotype, then smartly becomes something else. 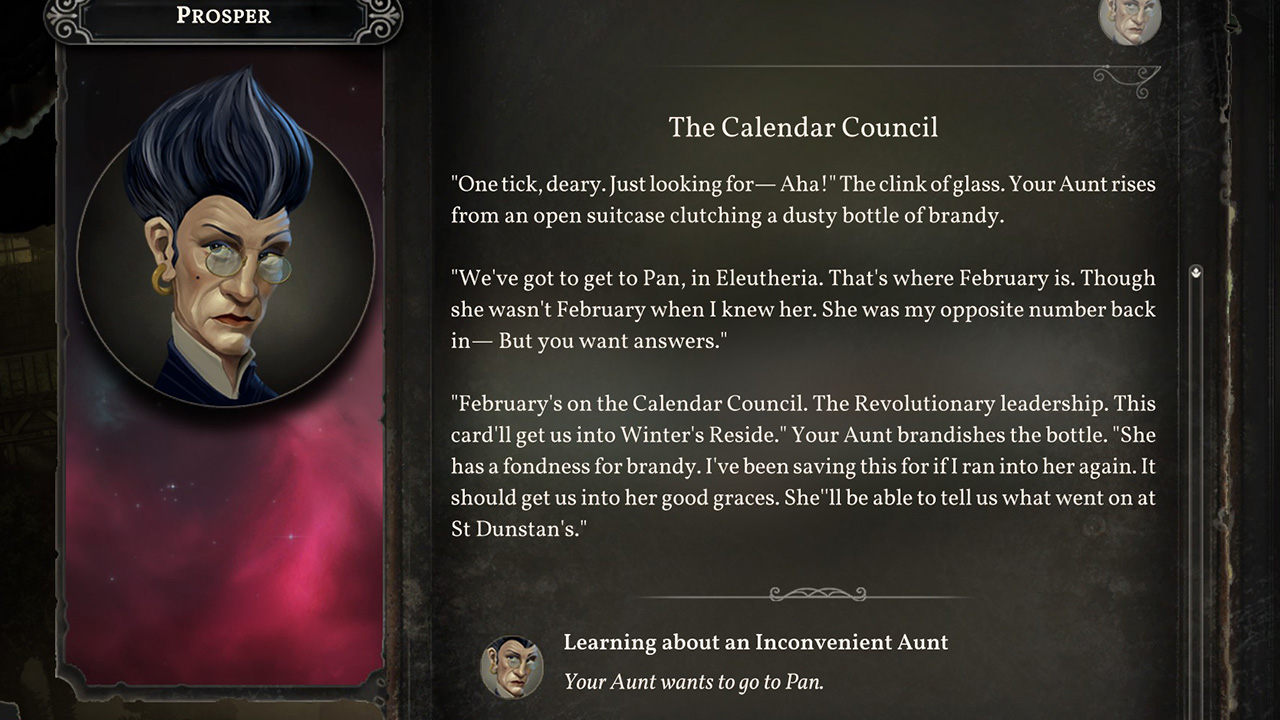 And all of these characters either twist unexpectedly or shine thoughtful light on the workings of an anything-goes universe. I feel fond of them all, I want to know their curious tales and withheld truths and the bigger pictures they paint of the places I visit, the ports I limp into, the other-worlds I fearfully navigate.

Most of them are monsters, of course. But monsters are people too. You need people out here. It's so lonely otherwise.

Disclosure - it transpires that one of the Officers, The Incognito Princess, was written by my fellow RPS co-founder Kieron Gillen. I enjoyed her story nevertheless.