It's been six months since the last time we got an eyefull of Shodan mark 3, the AI villainess of OtherSide Entertainment's upcoming System Shock sequel. Now in a new pre-alpha gameplay trailer we finally get see 'er in action. The studio released the video earlier today, giving a slightly clearer picture of the revamped universe of System Shock 3 and its unfortunate denizens who are out there living their lives, being ripped apart by machines and attacked by mutants. Shodan also appears to have gone under the knife herself, cosmetically-speaking, at some point since the last time we saw her.

But that's for after the jump.

"There is no evil here, only change," says our Sho'. "Your species does not in its current form work as designed, yet you resist."

The year is 2085. The place is Triop Blacksite. Running at just over a minute long, the System Shock 3 trailer takes you on a nice little tour of the body horror grotesqueries of the game - including but not limited to a dude whose legs have been torn off by a mech, bodies dissolving in vats, a lot of random intestines, and mutants who seems to be pushing out his own guts for some reason.

Yeah, a lot of intestines. And whatever is coming out of him: 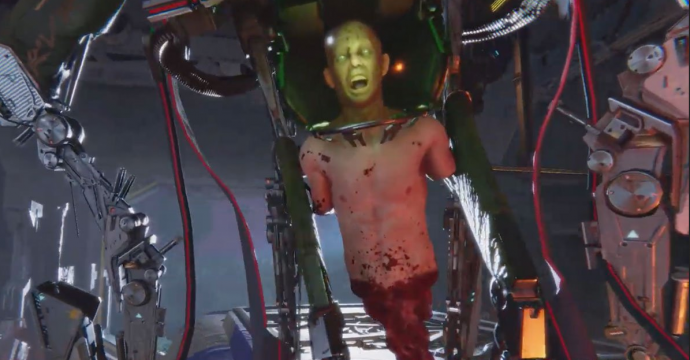 Shodan also seems to have gotten a bit svelter-looking since last time as well. Check out her original design from the earlier pre-alpha teaser released during Unity's GDC 2019 keynote. See the roundness about the nose that seems to have been replaced with something a little more elfin?

System Shock 3 will be coming to PC at some point, but the release date remains a mystery still. It was only this February that rights for the game were returned to the developers at OtherSide, after publisher Starbreeze announced it would no longer be involved with its release - Starbreeze had filed for administration at the time and was being investigated for insider trading.