If you click on a link and make a purchase we may receive a small commission. Read our editorial policy.
Developer: SFB Games
Publisher: SFB Games

I love a good locked room mystery. The best ones aren't so much about the 'whodunnit', but the 'howdunnit'. The former's still important for a satisfying ending, of course, but unravelling what appears to be the impossible (how did they get in? How did they leave?) is a much more brain-pleasing knot to unpick than figuring out which of the many shifty faces in front of you looks the most suspicious.

Tangle Tower, the latest game from Snipperclips brothers SFB Games, goes one step further, though. Instead of a person being the prime murder suspect in this charming Phoenix Wright meets Professor Layton-style detective puzzler, it's *checks notes*...

...a portrait holding a blood-tipped knife?

It sounds ridiculous, and yes, I don't think it's a spoiler to say it is ridiculous. "Of course, a painting can't kill anyone", your mind shrieks. But that's the genius of it. By beginning its tale with something so patently preposterous, Tangle Tower manages the rare feat of making everyone in its titular mansion feel like a genuine suspect. It's yet another impossible mystery to solve, making the whodunnit just as compelling as the how.

At the centre of it all is poor Freya Fellow, a gifted artist, scientist and all-round wunderkind who met her untimely end while painting her dear friend (and distant relative) Flora Fellow. Adopted into the halls of Tangle Tower as a young girl, Freya grew up alongside her fellow, err… Fellows, as well as her similarly distant Pointer relatives, who occupy the second of house Tangle's two towers.

Now, if you've ever had two families over for Christmas, you'll know that having that many people in the same house for a couple hours is a setup rife with murderous intent. If your mother-in-law isn't criticising the cooking, it's your wacky uncle going a bit Brexit over pudding while the children run riot with the latest flashing gadget that's destined for the bin. It's enough to push anyone over the edge, and so it proves with the Fellows and Pointers, all of whom are perfectly happy to pin the crime on whoever they like the least. There are secrets to uncover, rivalries to dissect, and more than a couple of double-bluffs to decipher, but it all makes for a compelling story that draws you in the moment Detective Grimoire and his wonderfully deadpan assistant Sally draw up in their rickety wooden boat.

Admittedly, the overarching mystery will probably feel a tad trite compared to the recent cerebral machinations of Disco Elysium, for example, but there's still something deeply endearing about this gentle tale of family misfortune. Indeed, Tangle Tower's superb voice work and lively animation do some surprisingly heavy lifting in this detective puzzle 'em up, making it far more appealing to the eyes and ears than even Capcom's Ace Attorney games. Every character is beautifully articulated, from their fluid movements and gesticulations to their witty and often chucklesome dialogue exchanges, and they infuse the game with a charm and personality that's all its own.

In fact, I'd even go as far as saying this is probably the first detective game where I've actually enjoyed speaking to every single character as I poke around for clues and evidence. In a similar fashion to those aforementioned pointy-haired lawman games, you spend the bulk of the Tangle Tower going from room to room and clicking on points of interest in its colourful dioramas. Some clues will be out in the open, but most rooms also have a light logic puzzle that unlocks another object to use in your questioning. They're not particularly difficult, per se (only one properly stumped me), but I liked that they were always connected to the item at hand, rather than being something entirely abstract a la the MacGuffin's you'll find in Professor Layton games.

You'll collect over 40 of these items as you progress through the mystery, and naturally, plenty of them have nothing to do with certain members of the family. But I was impressed that, no matter what item you thrust in their suspicious faces, there was a bespoke line of dialogue for each and every one of them. That's not something I was expecting from such a small development team. To see SFB Games putting in the time and effort to make everything unique is definitely worthy of praise. 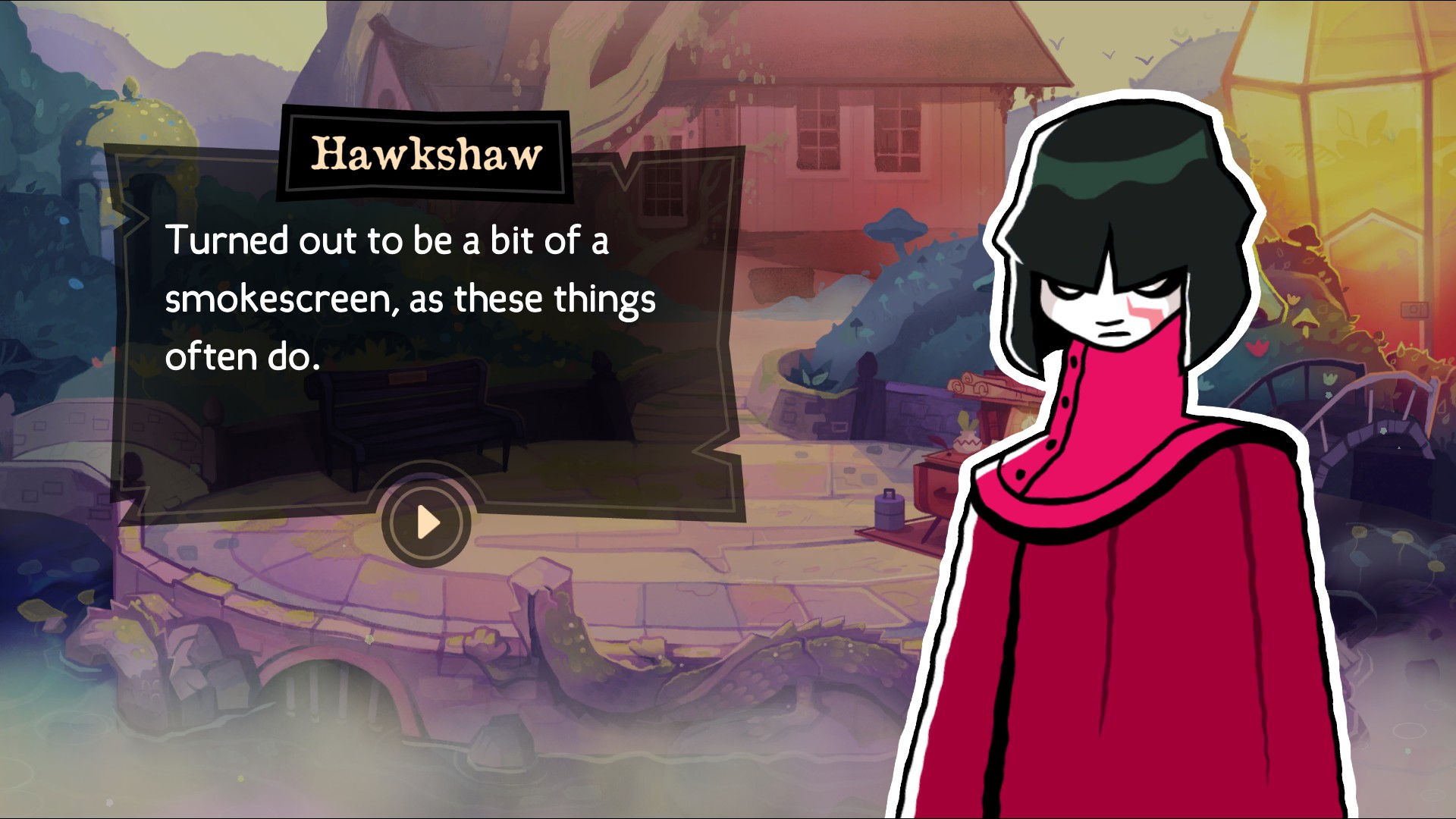 As such, I took great delight in chucking everything I had in my item trunk at the cast of Tangle Tower, just to see what response they'd come up with. Yes, it may be a rather cheap way of brute-forcing the story toward a conclusion, and one that doesn't really require any great deduction on your part, but when the dialogue is this entertaining, I honestly couldn't care less about playing it 'properly' like I would, say, an Ace Attorney game.

Besides, there's no pressure to play Tangle Tower in as few moves as possible, or to only present relevant evidence. There's no fail state in Tangle Tower. It's completely up to you to go where you like, when you like, and play it at your own pace. Naturally, that's going to be quite divisive among hardened detective fans –- where's the game if you can literally give anything to anyone without consequence? And yes, there were moments when I wished Tangle Tower had something at stake to make the accusation dialogues have a bit more weight and bite to them. We've seen it before in other open-ended detective games, after all –- characters clam up, or won't speak to you again if you get on their bad side –- and the lack of it ends up making Tangle Tower feel quite tame by comparison.

Equally, though, I don't think that's really in the spirit of the rest of the game. Grimoire isn't Sherlock Holmes. He's quick-witted, but he's also a bit amateur-hour, too, failing to connect even some obvious dots. This is where his partner Sally comes in, offering a more logical take on some of Grimoire's more out-there conclusions, and together they make a pretty good team. But everything from their dialogue to their wonderfully observed facial expressions also makes it perfectly believable that they'd fumble through evidence on occasion as well, throwing everything at a wall just to see what sticks. That's why I don't really mind SFB Games' slightly soft approach to detective work. If anything, it fits the duo to a tee.

Of course, there will always be those who prefer their investigative games to have higher stakes, and that's fine. Tangle Tower probably won't be for you, if you're one. But I rather liked its undemanding nature, as it meant I was better able to enjoy this five hour romp and relish its superb character work. Yes, it's a rather slight detective game compared to your heavyweights of the genre, but its winsome cast, gorgeous music and sharp writing go a long way to make up for it.