I’ve been playing Civilization long enough to remember building gaudy palaces that combined Arabic minarets with Ionic columns, and the sight of pixel-drawn Stalin grimacing at me with his retinue of Asiatic advisers. But after 20-something years and untold in-game millennia, I’ve finally begun to feel its insatiable fantasy of empire-building subside. Luckily, total overhaul mods exist.

The Civilization VI expansion, Rise & Fall, just didn’t speak to me; it felt more like a pacing patch-up than an attempt to 4Xify the most fascinating aspects humankind’s evolution. I don’t want passive point systems posing as Dark/Golden Ages, or a cast of doe-eyed governors being all bloody nice and functioning like a sort of diplomatic A-Team. I want revolutions and uprisings, fraught diplomacy and assassinations, corporations and insidious neo-colonialism. I want all these things colliding, systemically creating those mad moments that tilt the axis of history (like that bloke who shot Franz Ferdinand while buying a sandwich).

So instead of grafting away at a Civ game that feels too comfortable and sanitised, I sought out three of the biggest community mod projects for previous Civ titles that, in their own ways, make the stone-space-age journey compelling again, layering the game with systems and mechanics that really try to capture some of the drama of humankind’s evolution.

Note that you’ll need the full versions of the given Civ game to run these. 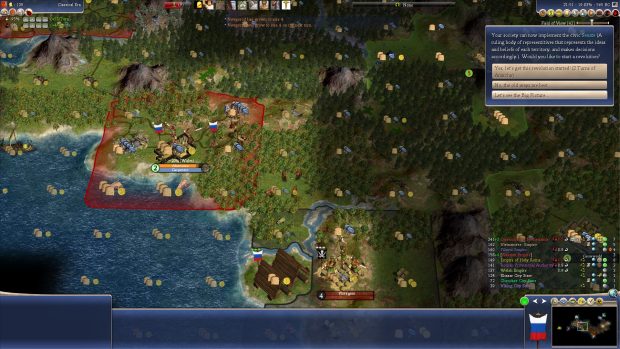 Work on A New Dawn began in 2009, when it was billed as “a new expansion” to Civilization IV: Beyond the Sword. Really though, those modders were just being modest, because there’s so much more on offer here.

A New Dawn is brimming with new and overhauled leaders, techs, rules, AI and buildings, but what’s really fascinating is the mindblowing number of tweaks you can toggle for each game you play. It’s basically a Civ toy box: you can spill out features like assassinations, bribe missions, breakaway states, barbarians turning into fully-fledged civilisations, you name it, then smash them all together and throw yourself into the chaos that ensues.

One of Civ IV’s most maligned features, the “stack of doom” (where 30-strong AI unit stacks could mindlessly steamroll you through sheer volume), has been addressed, too. You can limit the amount of units per tile to whatever number you like, and actually enable ranged attacks for ranged units too, imbuing the game with some of that more satisfying combat depth of Civs V and VI (with the obvious caveat that Civ IV wasn’t really designed around this kind of combat).

Inevitably, the breadth of new systems and all the permutations they bring can make for a volatile experience. A new “empire stability” system, affected by your decisions like government types and policies, makes a discontented homefront as much of a threat as outside enemies. During one game as Venice, I enacted a policy to nurture a Noble class, figuring that the Venetians could use a bit of silver-spoon snobbishness – you can’t just roll around in the mud worshipping rocks forever. My noble intentions caused one Enrico Dandolo to foment discontent and call for change, which me and my noble chums – nomming on caviar and popping champagne bottles with sabers – dismissed. The next turn, hordes of elephant riders popped up around three of my cities, stomping my complacent defences immediately, and leaving me as little more than a City-State while Dandolo took over Venice. 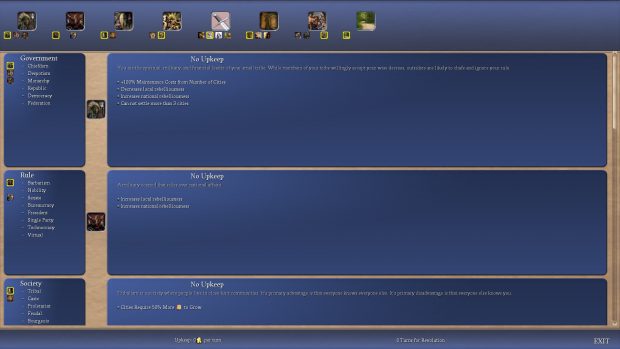 Maybe this kind of stuff is too batshit for a mainline game – with all its attention to balance and fairness for a mass audience – but for a jaded Civ veteran like me it was exhilarating: a divisive policy change, an upstart leader, a fallen empire. A vicious domino-effect where each piece is bigger than than last one. How brilliantly, infuriatingly historical.

All this may make AND sound overwhelming, so I should stress that it has plenty of more friendly features. Helping to keep games balanced, technologies spread between civilisations via borders and trade routes. There is also a flexible difficulty option, which rubberbands the game and makes it easier for losing players to keep up (great for keeping long multiplayer games interesting).

I love all the tonal touches too, like how your civilisation will be called a “City-State”, “Tribe”, “Empire” or whatever depending on your policies, or how taking over a city assimilates it’s unique units. Like history itself, AND is fluid, always shifting and presenting unexpected opportunities to spread your borders, while adding layers of intrigue and internal politics that threaten to undermine your own.

How to get it: Grab the installer here. It comes with a proper launcher and auto-updater and everything.

You can also get the AND Mega Civ Pack, which adds over 100 new civs and leaders to the game. All these leaders are reskins of existing leader models, so they’re fully animated. Be warned that this does include Winston Churchill in redface as Native American "Chief Winnemucca" (which is probably the kind of thing he would’ve done at the annual Chequers Halloween Party). 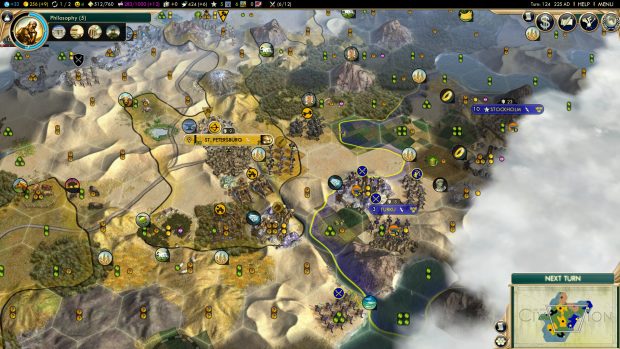 Since when was Sweden so damned obdurate? I’d been chipping away at its defences for a good couple of hundred years (a mere swing of a blade as Civ conflicts go), but the Swedes are scurrying in and out of combat like a well-trained guerrilla force. So caught up am I in this tactical headache that I fail to spot a Swedish taskforce flanking my entire empire to attack from another side. Then, their whole army insta-heals as a Great General spawns – Sweden’s unique empire trait in Vox Populi.

For the first time in years, the AI in Civilization outsmarted me, and it felt kind of good! I yielded, accepting defeat not just in the war but the whole doomed game, and started afresh – that little bit wiser to a much wiser game than the Civilization V I remembered.

When Firaxis lauded the modding community for inspiring elements of Civ VI, we can surmise that they were really talking about Vox Populi (formerly known as the Community Patch Project). Improved city-state diplomacy, adjacency bonuses, a Machiavellian espionage system that lets you carry out assassinations like Putin and steal paintings like Mr. Bean traces of all these things are smattered throughout Civ VI. 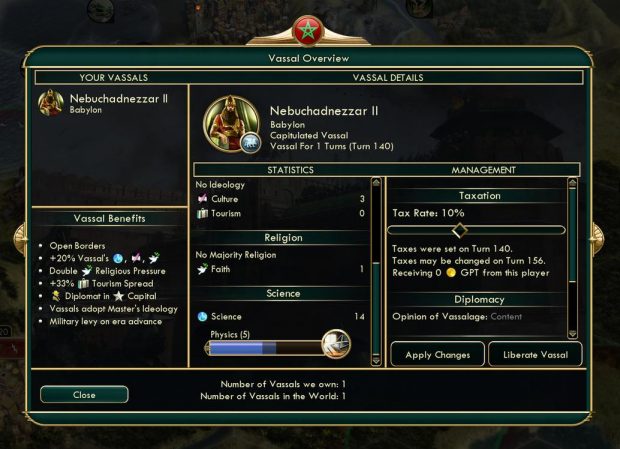 But unlike Civ VI, Vox Populi doesn’t shy away from more ruthless systems too, restoring Civ IV features like vassalage (letting you become a true colonial overlord) and corporations. The Corporations system is particularly well handled, giving you a monopoly over a resource if most of the world’s supply is in your hands. Each resource grants unique bonuses for monopoly holders, and can later be used to create corporations, complete with preset pun names and franchise outlets in rival cities. It makes luxuries a little more than just Happiness generators. Speaking of which, Happiness is no longer a universal happy/sad face icon, but works on a by-city basis, with poverty, boredom and crime all feeding into it.

Vox Populi is sparing with its new features, keeping games more elegant and orderly than its wild-eyed cousin AND; each changed system and rule fits neatly within the Civ V framework, and experienced players are unlikely to get wiped out by some freak vagary of history. That’s not to say that the world feels staid though; City-States are no longer just laying around to be wooed by you and have their own agendas and conflicts, while neatly presented ‘Events’ let you make choices that will have lasting consequences. As well as adding depth in all the right places to, Vox Populi evoked a sense of wider narrative in a Civ game that had previously been known as feeling a little cold.

How to get it: Like all good things Civ, Vox Populi lives at Civ Fanatics. To play it in multiplayer, you need to also grab the Community Patch Project modpack. 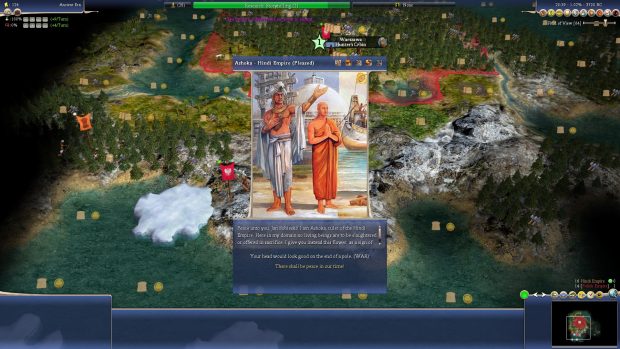 With its focus on historical veracity, you get a sense that Realism Invictus was created by robed scholars, ghosting through cavernous libraries by candlelight in search of leather-bound tomes about forgotten civilisations and ancient warfare. Indeed, the 71-page manual expatiating on the philosophy behind the mod and the historical reasoning behind every mechanical change gives those chunky Civilopedias you used to get with boxed Civ games a run for their money.

The roster in Realism Invictus is completely overhauled, with each civilisation represented by a wealth of redesigned buildings that reflect its heritage, and culturally appropriate units (so no more Native American-type Scouts inexplicably being used by Central Europeans). With more unique units and more drastic leaders traits, RI is unusually asymmetrical as Civ goes, bolstered by the fact that empires tend to thrive when they actually did in history (so England, Portugal and other colonial powers get their best units and buildings in the Industrial era, while the new South China civilisation has early advantages). In a bit of a throwback to Civilization II, animated leaders have been replaced by regal old-timey portraits (though I’m fairly convinced that the image for South China’s Sun Quan is from Dynasty Warriors).

Culture and technologies spread in new and natural ways (invasions, trade, borders), while resources have a nice new slant too, in that you can use special buildings to combine resources to create new ones, forcing you to think more about your production line. 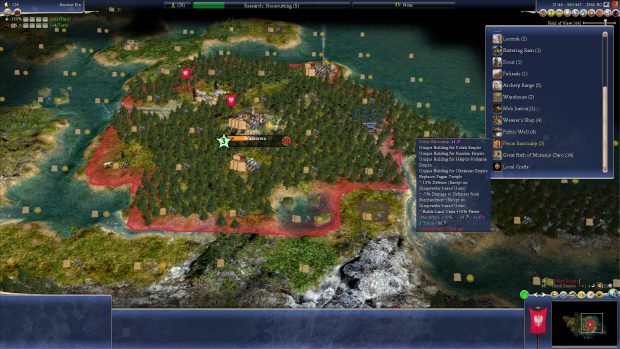 Combat in RI is filled with nuances. Units on coastal tiles, for instance, will get debuffed if there are late-era enemy ships adjacent to them, quietly reflecting the effects of shore bombardment. Stacks still exist but are more considered, rewarding unit variety and punishing excessive stackage with debuffs in the form of ‘Supply Problems’. RI isn’t averse to a few flights of historico-fantasy either, chucking in the brilliant idea of World Units: Wonder-esque super-units for every era that can only be built once per game (like Helopolis the badass siege tower).

Realism Invictus feels more introspective than the other mods listed here, its overhauls creating a slower-paced but still very /well/ paced game. Instead of blasting you with a world of new systems (it even removes some, like corporations), it makes sensible wholesale changes that always keep the looks, functions and historical chronology of things in sync with how they were in the real world.

With its focus on flavour and immersion, RI is as close as Civ’s ever been to historical simulation. To that end, if you want to just drift through history and not worry about the end-game, you can remove victory conditions and rewire the AI not to play towards a particular victory type. The core Civ loop that makes the series such a perennial joy to play is still there of course, but RI’s achievement is that it makes all the little things so thoughtful and involved, thereby pushing the dry number-building that governs the series into the background where it belongs. Firaxis, take heed.

How to get it: Realism Invictus is so fancy that it actually has its own website, where you can grab the latest version. Get the PDF of that mega-manual too while you’re there, print it, and plonk it on the toilet cistern.