Minecraft is a strange phenomenon in gaming. Like a towering skyscraper, the mind stops recognizing it as a place for humans to inhabit, and it just becomes part of the landscape. Every now and then, something recognizable pokes out of a window and you're forced to re-assess your outlook on the world. In this case, it's the boys, girls and monsters of Final Fantasy XV, as they make a cameo appearance in the Windows 10/Cross-platform edition of the game.

Much as it would behoove me to be a grumpy old git and roll my eyes at this silliness, I must admit that they've gone above and beyond with this skin pack. While some of the secondary villains are less recognizable when boiled down to a handful of bricks, most are immediately familiar, up to and including some more esoteric choices such as Leviathan. Yes, the gigantic sea-serpent, now balanced precariously on two tiny stubby little fin-legs. 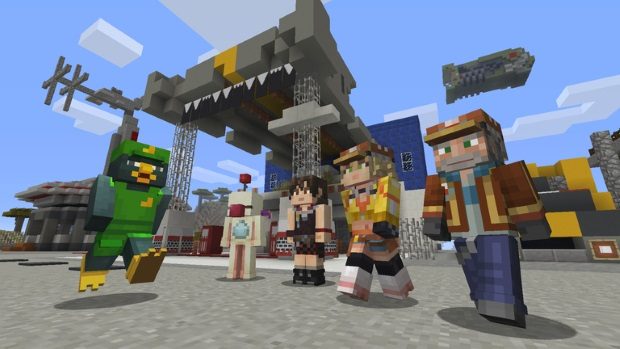 Of course, this is nowhere near the strangest skin pack to be produced for Minecraft - it's a fairly iconic bundle of broadly liked characters from a presently popular game. Running for top spot in the weirdness rankings is probably The official Stranger Things pack (covering both seasons, Ghostbusters costumes and all), with the Doctor Who and Magic: The Gathering packs coming in second and third.

In the end, who am I to judge? Sometimes a kid just wants to dress up their little block-person avatar as a Chocobo. And compared to the enormous industry that is Minecraft-related merchandising, a character skin pack almost seems quaint by comparison.

While there could have been potential here for some daft pricing, the 43-character skin pack comes in at a fairly reasonable-seeming £2.39/$3, and can be snagged on the Microsoft store here. Understandably this is only for the walled-garden multi-platform edition of Minecraft, and original Java-version players can just make their own.