If you click on a link and make a purchase we may receive a small commission. Read our editorial policy.
The Dungeon Of Naheulbeuk review
The Dungeon Of Naheulbeuk is a goofy, D&D-themed turn-based tactics game. It’s mechanically sound, extremely polished, and surprisingly difficult - although if the word 'zany' sets your teeth on edge, be warned.

In the classic opening move for the type of review some of you might typify as "the classic 7/10", I'll say this: I liked The Dungeon Of Naheulbeuk: The Amulet Of Chaos far more than I expected to. It's XCOM by way of Order Of The Stick, but with the battles connected by wandering about in the ‘gather your party and venture forth’ tradition of Baldur’s Gate.

Don’t expect Baldur’s-Gate-style roleplaying, however, ‘cos this ain’t an RPG. It’s a satire of one - primarily the tabletop kind, though it takes aim at CRPGs too - and while the tactical bits are played straight, nothing else is. There’s my biggest caveat about this game, then. Its humour is relentless. And while it ended up hitting the mark frequently enough for me to warm to it, it was a close call. Your mileage, as they say, may vary.

I think that’s where we’ve got to start, really, since Dungeon’s tone is its defining feature. The tactics bits are a definite thumbs up from me, but they’re fairly unsurprising if you know the genre at all, with solid design and little in the way of innovation. No; the humour will likely be the thing that determines whether you’ll enjoy it or not

Going in, it was definitely a source of trepidation for me. A fantasy-themed XCOMmer, I thought, seemed a cracking idea. But a fantasy-themed XCOMmer... adapted from a French audio drama and comic series, with a Steam page describing it as “wacky”? Hmm. Also, the fact it was made by Artefact Studio, the creators of none other than Garfield Kart Furious Racing, lent the whole prospect a certain dark energy. 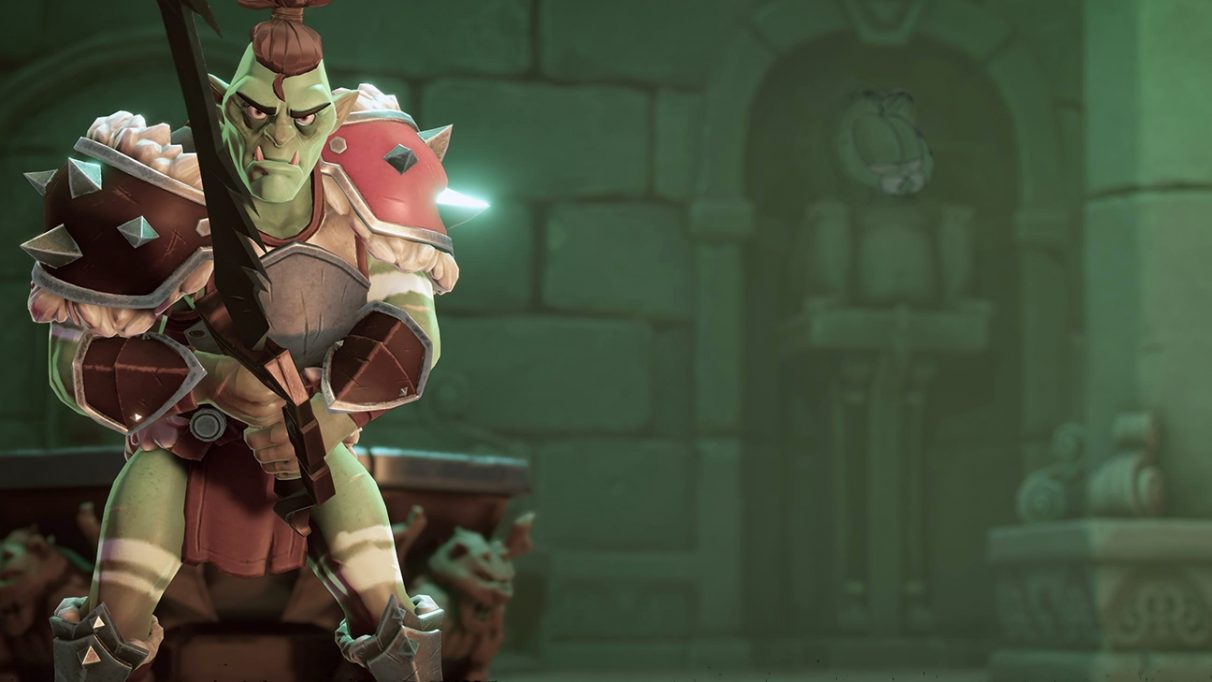 It makes sense that Dungeon is based on an audio drama, as it has a gigantic script. Your party of adventurers (all of whom are set in stone, I should warn, with only skills and gear customisable) rabbit on endlessly. And to be fair, the voice acting is excellent. Furthermore, if some of it is lifted from John Lang’s original Donjon de Naheulbeuk, then it’s certainly well-translated. All of the jokes make sense. It’s just that some of them just happen to be complete piss, is all.

Because it’s self-aware D&D parody, yeah? You know the territory. I won’t deny that it can be really funny. Even surreal, sometimes, in the genuine sense of the word. The Dungeon Of Naheulbeuk itself, while introduced as a forbidding place that no adventurers have breached and lived to tell the tale, turns out to be weirdly gentrified, like a developing nation infested by backpackers after being touted as “off the beaten track”. There is even an enormous, Wetherspoonian boozer for visitors. I really liked stuff like that. Additionally, there’s a phenomenal amount of flavour text in the game, attached to every conceivable bit of information, and a lot of it was legit amusing. Oh, and there's an ogre who's like a sort of Poundland Shrek, and I absolutely loved him despite myself. 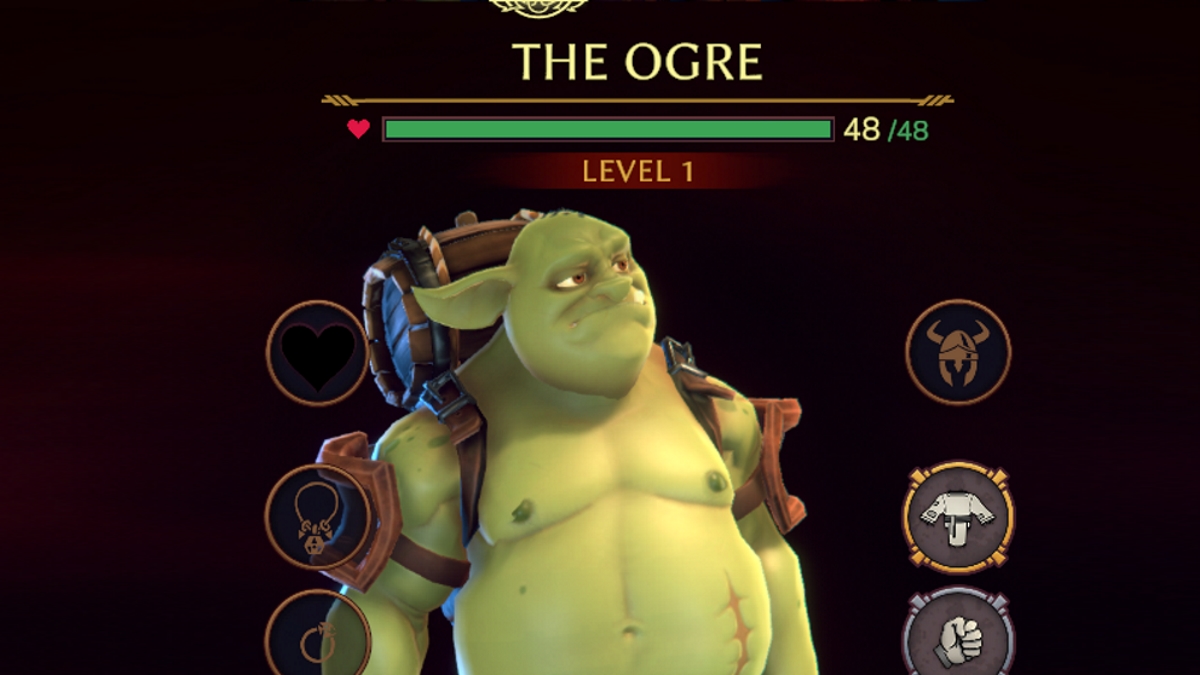 But then, there’s all the stuff that’s “surreal”, but in the sense that fools use the word. The running jokes about ker-ayzee chickens, for example. And the frequent, drunken swerves into the fringes of the “monkey cheese RANDOM” humour purveyed by rubbish “geek culture” webcomics in the mid-2000s. There are fart and poo gags. There is reference humour (“I used to be an adventurer until I took an arrow to the knee”, in 2020. Yes, really). There’s a lot of swearing for the sake of swearing, which is funny while it’s fresh and surprising, and slightly grating thereafter.

It never becomes obnoxious, and as I say, there are some gems in there. To be honest, I can think of plenty of mates who’d enjoy the stuff that made my eyes roll. Just be aware of it going in. Honestly, my biggest issue with the dialogue, and in fact the wandering-around-a-dungeon framing device in general, is the extent to which it dilutes the fighting. Because the battles were great, and I just wanted to keep having them. 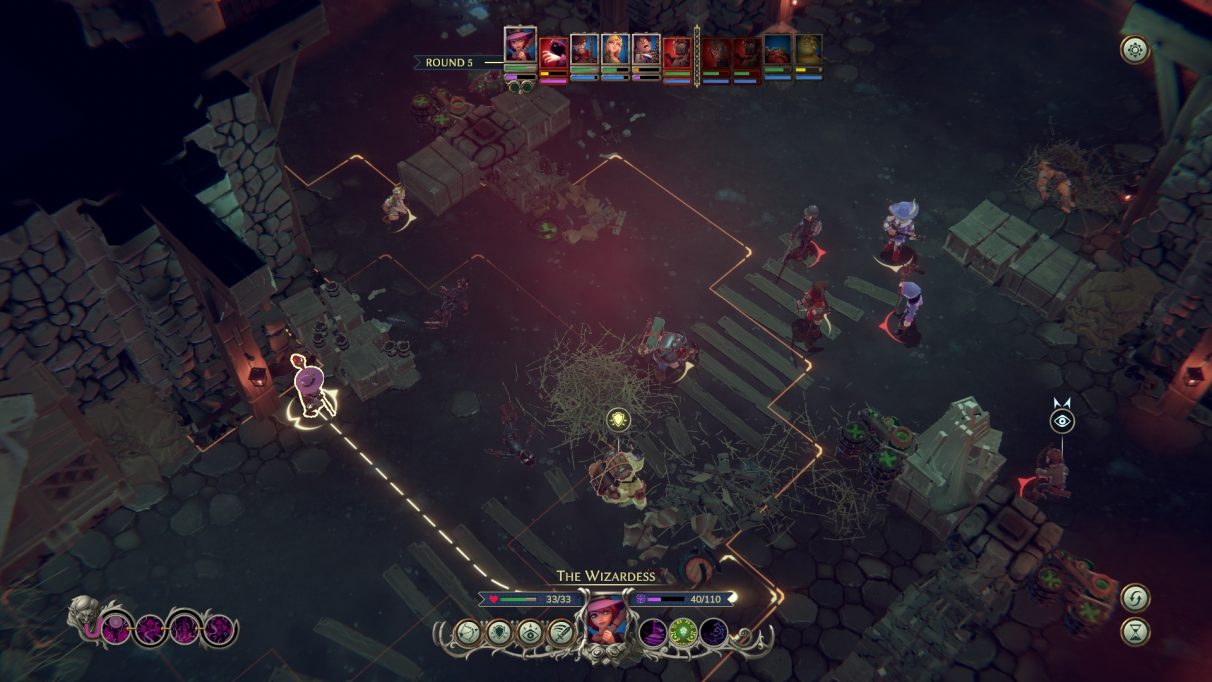 When I fell in love with Gears Tactics earlier this year, it was primarily because it was a no-frills, non-stop beef delivery machine, which let me mainline fights, with just enough Gears flavour in between to wash them down. But with Dungeon, I had to interpolate each mouthful of fisticuffs meat with a heaping portion of dialogue vegetables. And since the story is mostly linear, fight-encounter-fight-encounter stuff, I certainly got my five a day.

I think half the problem is what I mentioned at the top of the review - it’s not an RPG. If the dialogue branched significantly, or you made significant choices about who to help, or what have you, I might have been more invested in the exploration/dialogue segments. But as it was, it had the feeling of being trapped in a cutscene, where I had to do the work of moving the characters around.

It’s worth saying, however, that the environments you’re wandering through in Dungeons are lovely. It’s a beautiful game with an outstanding level of polish, and consistently impressive art direction. There was a moment where my party walked out of a bit of dungeon onto a rampart on top of a dizzyingly high wall, and the combination of perspective and focus blur made the view genuinely awe-inspiring. I did not expect that at all. It’s almost a shame there isn’t more overall variety in the environments on show, because I would have loved to have seen that art team unleashed on some weirder stuff. 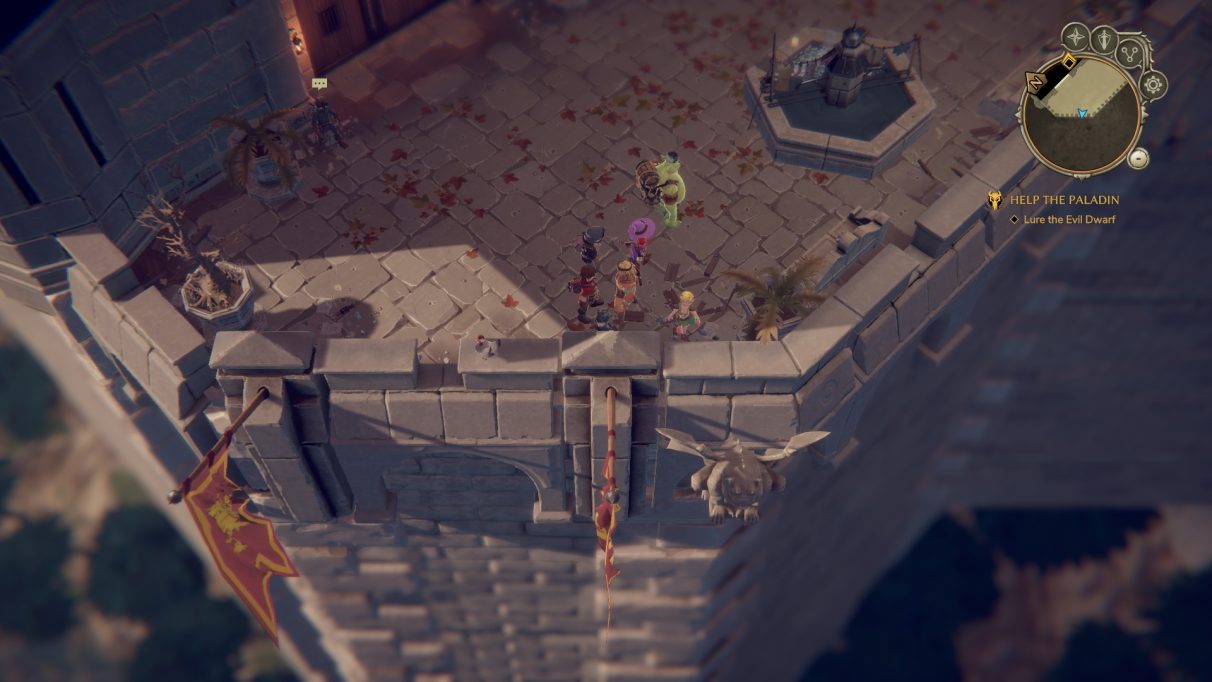 Beyond the script and the art, the other place where I could see the sheer amount of work that went into Dungeon - and which moves the game to ‘recommend’ from ‘lukewarm hand-waggle’ - was the design of the actual turn-based combat system.

Again, there’s not a lot that’s wildly divergent from what you’d expect from anything post-XCOM, and I really hate spending paragraphs and paragraphs describing rules. I suppose there are three things that made the combat stick out for me, and the first of those was the importance of positioning. With this being a fantasy setting, melee combat is more common than ranged, and so considerations like backstabbing, attacks of opportunity, and character adjacency take precedence over overwatch and cover. 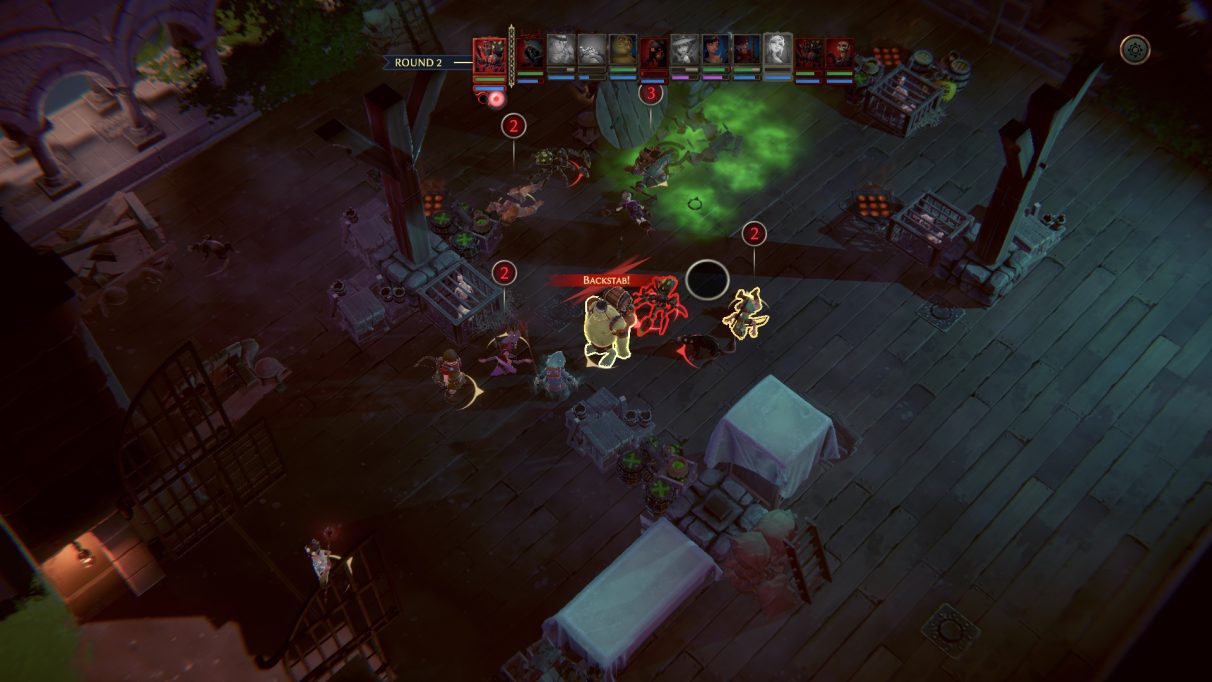 The second thing I noted was the ruthlessly efficient presentation of information. The game gives you every bit of information you could possibly want to glean about your characters and their opponents, and puts it in a sensible, intuitive place. A tactics game can only be as good as the information it gives you, and in that sense, Dungeons has the raw materials for excellence.

But that’s different from being excellent. Tactics games should be about tough decisions between limited options, all of which have clear risks and rewards. Partly because you’re always fighting with a large party, and partly because you’re given so much information to work with, combat is freighted with plenty of “guess I’ll just do this” moments, where you can’t be arsed to run the numbers on six different spiders, as it would make the fight go on for hours.

I think there’s a bit of a tonal issue there, too. Because of the game’s overall silliness and sense of knockabout harmlessness, and the lack of permadeath, there’s no real tension to make you sweat over decisions. “Who cares if the barbarian dies,” you think. “He’ll be back later, so I might as well just run him into that load of skeletons and see what happens.” 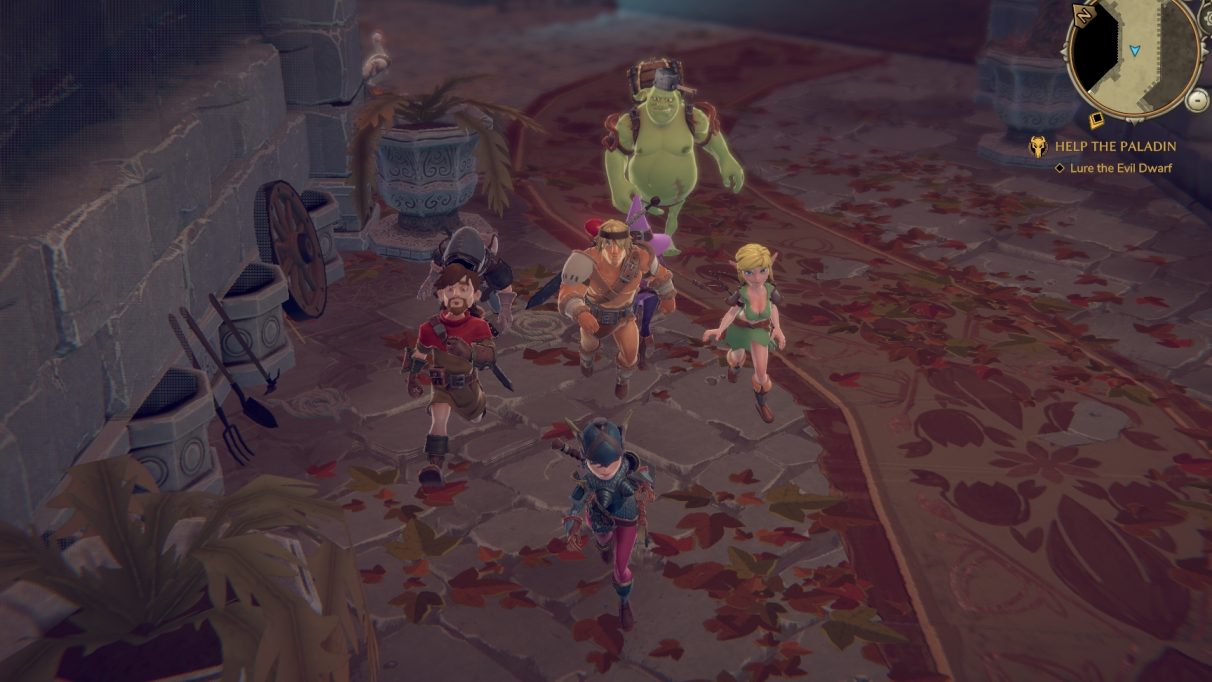 This butts awkwardly against the third thing to note about combat in Dungeon, which is that it’s bastard hard, even on its default setting. A couple of hours in, fights started becoming ludicrous tag-team affairs, where my main efforts were towards keeping at least one healer alive, in order to resurrect the four-or-so party members lying unconscious at death’s door at any given moment. But hey, I enjoy a tough tactics game, and there’s an easy setting if you’re more in it for the adventure.

Oh, and if you’re the sort of person who gets really angry at Ye Olde RNG, be warned: people seem to get very angry about it in this game, and I’ll admit it did feel like my party had a bad case of butterfingers at times. From developer responses to salty Steam reviews, it seems some of this is an intentional dovetail with the game’s slapstick tone. But it can be irritating all the same.

So there you go. If you like XCOM-ish things, The Dungeon Of Naheulbeuk should be in your library - just so long as you don’t mind a bit of hamfisted zaniness. I don’t think it’s one you’ll want to replay again and again, but it’s a substantial, well-crafted effort that’s definitely worth your time. Admittedly it’s no Garfield Kart, but it’s unreasonable to expect a developer to produce two once-in-a-generation masterpieces on the trot, after all.