If you click on a link and make a purchase we may receive a small commission. Read our editorial policy.
The Falconeer review
A beautifully realised world housing an enjoyable and original, but limited 3D aerial combat game.

A bit of imagination can go a long way. Shooty games about wandering a somewhat living area of outer space doing odd jobs in between a chain of story missions are their own subgenre, to the point where even the good ones can blur together. There are only so many laser cannons and thrusters and made-up space minerals I can keep track of, y’know?

The Falconeer is, broadly speaking, one of those games, but in a much more novel and colourful setting. Instead of space, you fly over a vast ocean. Instead of ships, you ride a giant falcon, and fight flying dinosaurs, semi-mechanical (I think?) insects, and huge undulating serpents covered with gun banks. Instead of lasers, you fly into storms to charge up your lightning guns. Its world is so fresh that I’ve found myself rating it above games that, on reflection, have a lot more in them. It’s just now occurred to me that there isn’t any trading in it, for one thing.

What it loses in capital-F features it gains in originality and atmosphere. Whether that’s enough for you will vary.

It’s an endlessly pretty game, for one thing. Even seen entirely from the air, its ocean is easily the most gorgeous I’ve seen outside of Sea Of Thieves. The range of colour and light you’ll see played out across its vast sky is wonderful, and I can think of no other game that’s had me periodically fly directly up, away from my troubles, just to break out above the clouds and hear the music gradually drop to a gentle windchime to accompany the starlight.

There’s some tactical value to this too, as it zooms out your minimap, and diving naturally drives your speed and replenishes your stamina, and, well, of course you’ll be divebombing your enemies. You’ll be needlessly spinning as well, just because it feels like the right thing to do. Plus it does make combat a bit less hectic.

There’s something exciting here, and I want to see more of it.

The Falconeer has a lot of combat. There was a honeymoon period where I just flew around exploring, flying for its own sake, landing at ports and occasional shrines (which bring up fully voiced flavour text and unlock some side trinkets). The friendly merchant boats you target sometimes offer escort jobs, which paid surprisingly well for often no combat. There are aerial races to unlock alternative birds, package delivery side jobs, and a brilliant geographical feature called The Maw. It’s a huge chasm gouged out of the ocean, with a weird little watery bridge, and for the longest time the game absolutely refuses to explain what it is or how it’s possible. I respect that immensely. It’s part of the world! It’s clearly THE local feature. Why would anyone explain it to you? Do you talk to the postman about what trees are?

Sooner or later though, you’ll want to get stuck into the story. There is, bluntly, not all that much to do outside the main story, unless you really get a kick out of simply flying, delivering, and taking in the ambience. It’s a decent enough story, too, as you play a mercenary taking on jobs from a series of jostling local noble houses. Initially you work for Dunkle, a somewhat downtrodden ‘free house’, who get treated unfairly by a local power. There’s a kind of Dishonored feel to the whole thing, what with everything being submerged, and aquatic industries, naval power, and aristocratic roles dominating society. But where Arkane’s stabby assassin game was murky and bloody, The Falconeer is more like its high adventure cousin. 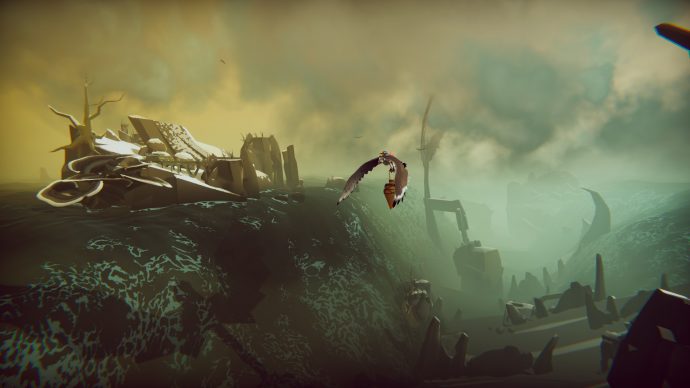 Sure, its factions are duplicitous, and you’ll blow up hundreds of people. Even Dunkle responds to being screwed over by immediately turning to blackmail, and pretty much everyone likes to use pirates as a smokescreen for much worse behaviour. But it’s hard to drag a tone into the mire when you spend all your time watching beautiful sunsets or exchanging shots with other falconeers to a backdrop of dramatic storms.

What does drag it down a little, though, is the repetition. Its big fights are superb, particularly one where some factional skulduggery demanded that I only pretend to fight a hostile force, while actually letting it blow up a neutral base so my side could say at least we tried. When the birds and the dinos are swooping all over, and those lumbering airships are distracted by the boats, tempting you to dip into the water to pick up a mine and drop it on them… yeah, that’s some damn fine dogfighting. But it does get samey. New enemies are introduced fairly steadily, but your weapons all feel much the same. Shooting the individually-targetable sails of boats or guns off the big sea beasts is a welcome dynamic, but with few tactical options, it starts to feel like dogfighting with extra steps. Especially with the camera controls being so awkward. 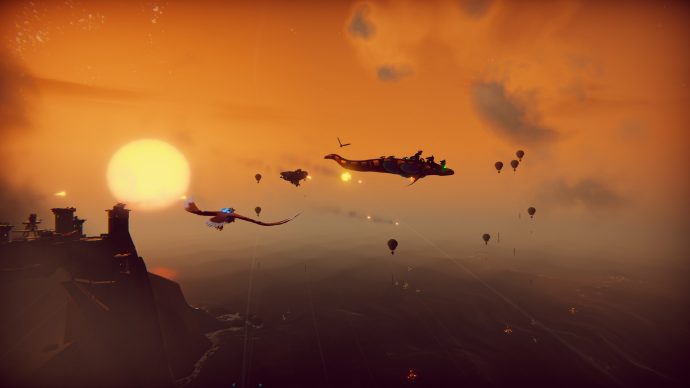 Controls are a problem in general. Although the game itself recommends a controller, I found the mouse and keyboard option was fine in itself. But the way the camera works caused lots of frustration. General flying is no problem, with the camera following your bird, which you control using the mouse, plus a couple of keyboard buttons for controlling speed. But when a fight starts and you want to look in any other direction, there’s a strong chance that doing so will interfere with whatever you’re trying to do. The WASD keys tilt the camera in a corresponding direction, in classic flight sim style, and there’s a ‘track target’ button, but for some unknown reason, both also cause your control of the bird to go out of the window, making them a liability for any more than the briefest glance.

Less frequent but more frustrating are the moments where your control of the camera is wrested away completely so it can focus on introducing an enemy, or sometimes an ally. In the bigger fights I genuinely lost track of which was which more than once, making the sudden pan to an unknown NPC appearing on the edge of an already hectic fight about as welcome as a fighter pilot’s entire windscreen unexpectedly cutting to Wrestlemania highlights. 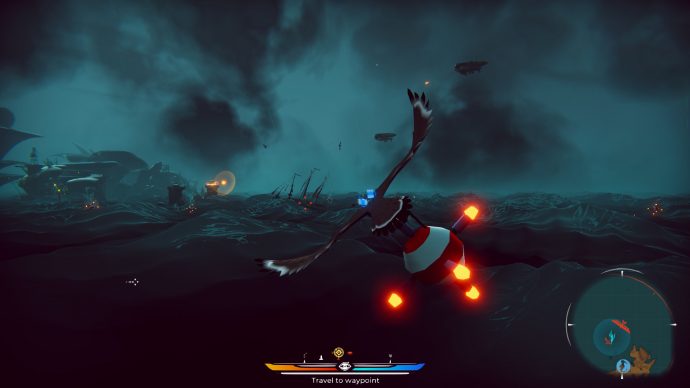 More maddeningly, although time slows for these segments, it does not stop. Just imagine for a moment a fast paced 3D flight combat game in which your controls can be frozen and your vision totally cut off for a few moments. Twice the game interrupted my diving towards a mission-critical item to show me a close up of that item, and by the time it gave control back I’d completely overshot it. Both times also saw that item completely vanish, and after several minutes of fruitless circling force me to restart the entire mission. Missions which sometimes involve a stretch of flying in uneventful circles while waiting for an allied boat to get into position. Hnnngh.

But here’s where I read all that back and feel like I’m being too hard on it, because in longer missions, The Falconeer also gives you the option to skip long fights. It doesn’t penalise you for dying either, unless you count the resulting cut scenes where some sort of shamanic figure waxes mystical about god knows what. These are so divorced from any meaningful exposition that I was instantly skipping them by my third death. There’s a freely available menu option to warp back to your home base at any time, including for the last leg of a mission just to save the flight back. 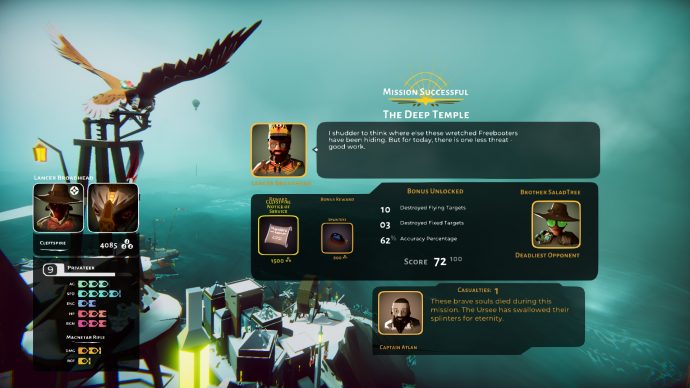 It’s just in need of a little tweaking, is the thing. Some annoying but niche bugs, a few checkpoint issues, a maddening habit of the camera that I imagine could be patched or made optional with relative ease. These things irritated me precisely because they took me away from the good time I was having.

Since my first few hours with The Falconeer, I’ve been tempted to express the sentiment that it has tremendous sequel potential. The only reason I hesitated to lead with that is the worry that it could be taken the wrong way; it could come across as damningly faint praise, or a recommendation that people give it a miss, ironically making a sequel far less likely. I mean it in a positive sense, though. There’s something exciting here, and I want to see more of it. I want to see its ideas developed, its possibilities expanded. I’d like to have more to do outside the story, more interaction with NPCs, more weapons and equipment and tactical options. Specific interactions with the falcons you ride, or other riders even. But then gosh, it’s hardly fair to give its creator Tomas Sala a hard time for, y’know, being mortal. And it’s definitely unfair to knock a solid game because I want more of it.

Does that mean that I can recommend it without reservation, though? Ach. That wouldn’t be fair on you. Fixable minor issues aside, The Falconeer’s limitations kept it from fully winning me over. But it’s bloody impressive when its stars align.