A is for Aerodynamic angst.

B is for Beautifying Britain

If the X-Plane 11 2018 sales graph features a late-year Snowdon, Laminar Research will have Orbx to thank. The scenery smiths have recently released the first phase of a breathtaking 42,000 square mile British makeover. TrueEarth Great Britain South (£31) covers the swathe of Blighty between the south coast and, approximately, that Welsh peak's latitude. Two further volumes will complete the transformation.

C is for Cardboard companion 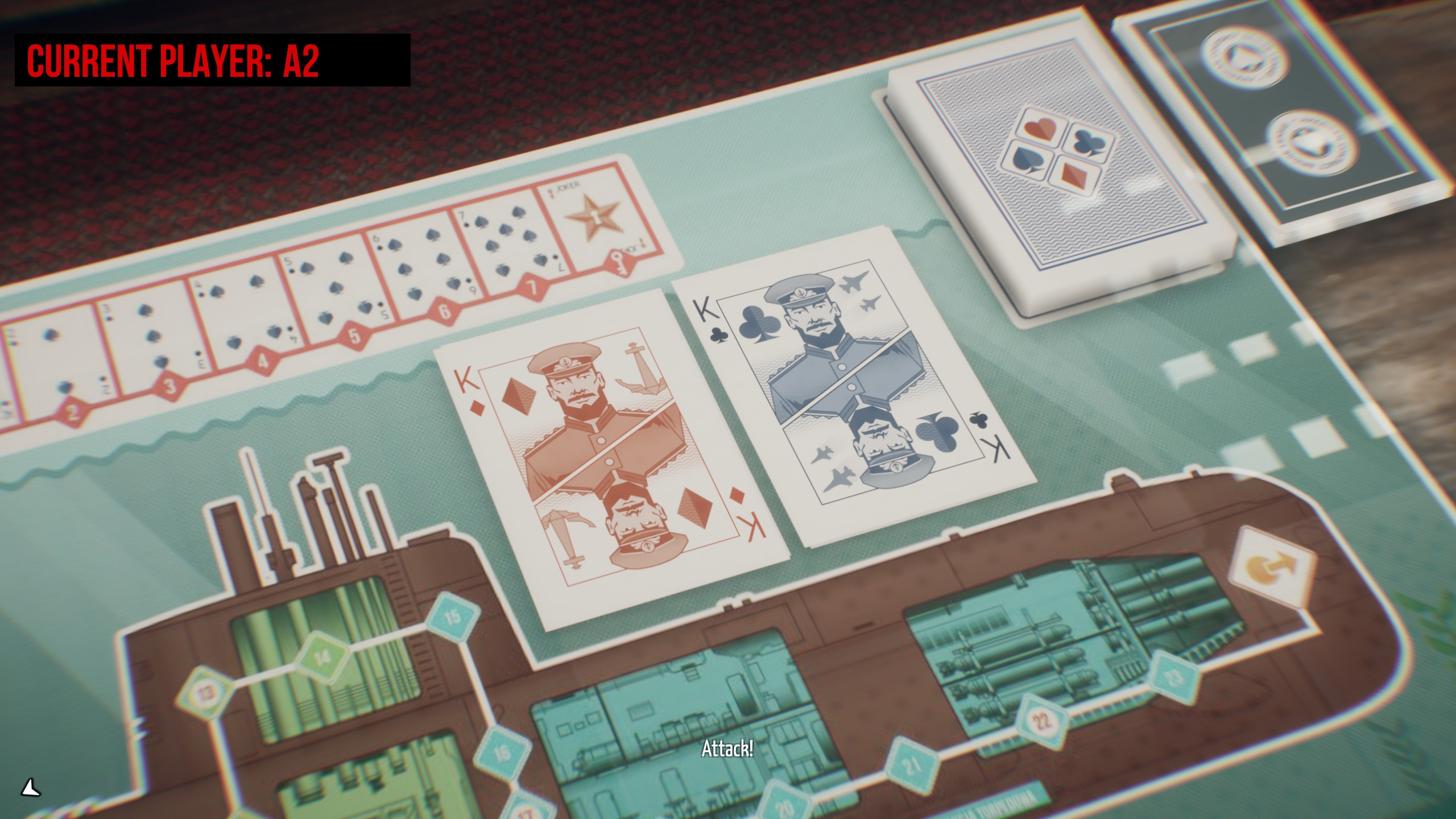 Judging by the flotilla of hotfixes that followed the Kursk release, Jujubee's slightly dubious “documentary game” about the K-141 disaster looks to have left port prematurely. I wonder if the £11 print-and-play board game they launched on the same day is more seaworthy.

D is for Demo dimensions 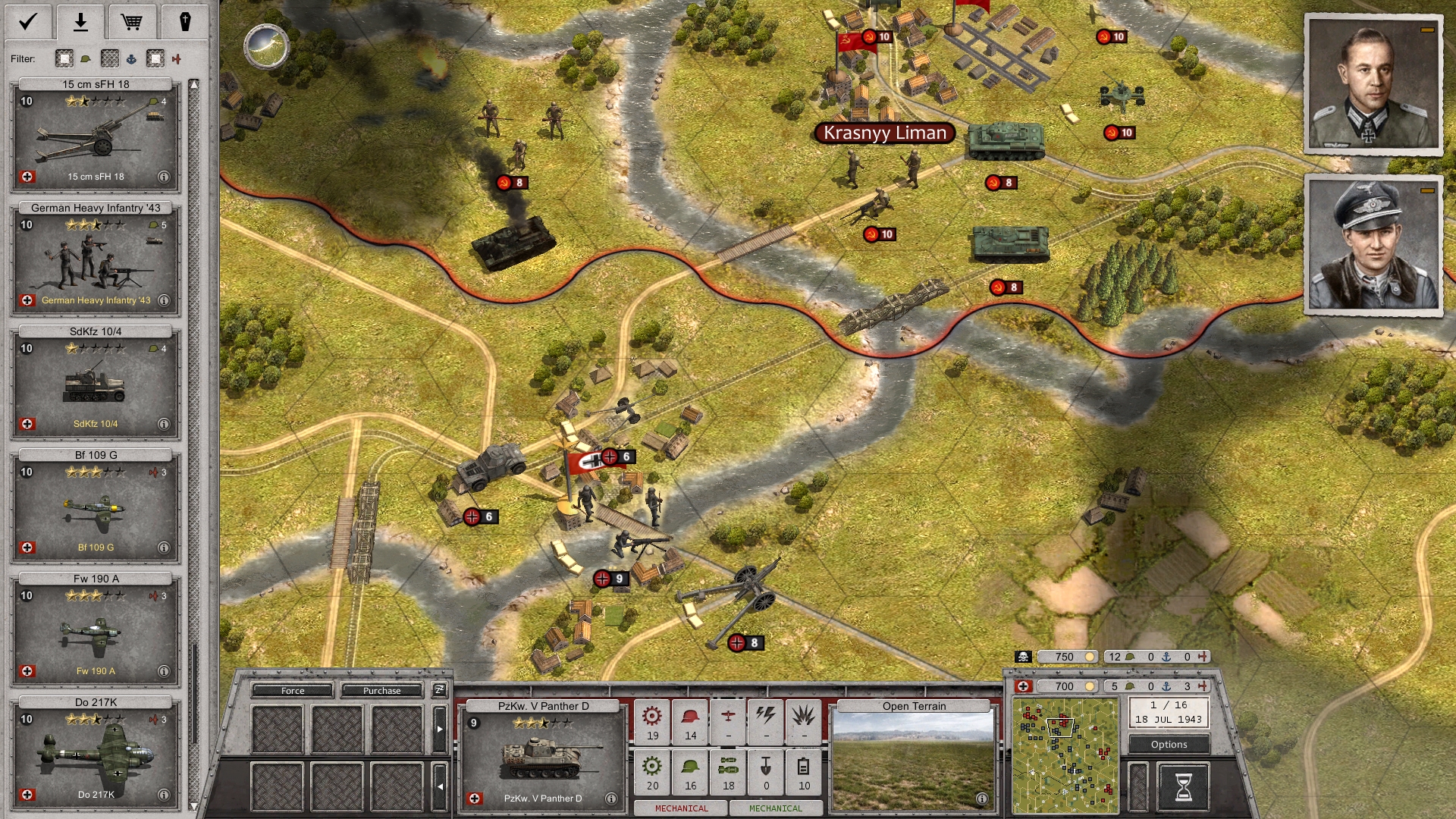 When it comes to demo generosity one of the few wargames that can out-alms Panzer Battles (see on) and second-generation Combat Mission is Order of Battle. Because the first mission of every DLC campaign pack can be tried in OoB's free base game, and for the last three years Aristocrats have been quietly pumping out additional content, this entertaining Panzer General-alike is now groaning with gratis war. The pictured scenario is a tempter for Endsieg, the latest adjunct.

E is for Engine entente

Or 'Exceptionally Exciting News From Epsom' if you prefer. It seems Slitherine have finally had enough of reviewers grumbling about the automated blink-and-you'll-miss-them ding-dongs in AGEOD's grand-strategic offerings and the disappointingly simplistic campaign layers in Richard Bodley Scott's tactical fare. Field of Glory: Empires will feature AGEOD's characteristic WEGO army movement on a cellular European map and - assuming you own Field of Glory II - battles orchestrated using Byzantine Games' latest release. Judging by the reveal embedded above, the bold tripartite project has been underway for some time and FOGE is in no danger of being branded shallow or unwieldy.

G is for Garrulous gargoyles

British diesel locomotives don't come much more mundane or mellifluous than the Class 31. Ever since I first encountered them bustling parcel trains along the Great Western main line in the early Eighties, I've loved their awkward appearance, their merry warbling, and their lack of airs and graces – qualities that appear to have been captured superbly in Armstrong Powerhouse's latest Train Simulator enhancement pack.

H is for Hardware heartache

A small, passionate portion of Train Sim World's fanbase would dearly love to scuttle through West London/West Somerset/West Maryland/Westphalia etc. without touching illusion eroders like mice, keyboards or gamepads. Prior to TSW's release, Dovetail indicated that they were hoping to support the desktop dominating RailDriver controller but the necessary code has yet to appear. PI Engineering admit that their brainchild is somewhat unconventional - “RailDriver communicates with the OS via the USB HID consumer page – it’s not a game controller. The advantage of this method is it gives the software developer full access to our data report and a good solid two-way connection when it’s integrated. It allows the software to talk back to RailDriver and use our display for speed or throttle position. The disadvantage is we’re not going to show up like a standard game controller in the OS and start working like a USB joystick.” - but are clearly confused by the lack of enthusiasm from the British dev - “We’ve worked side by side with Dovetail on integrating their other train simulation applications, so it baffles us as to why we’re left out of TSW.” 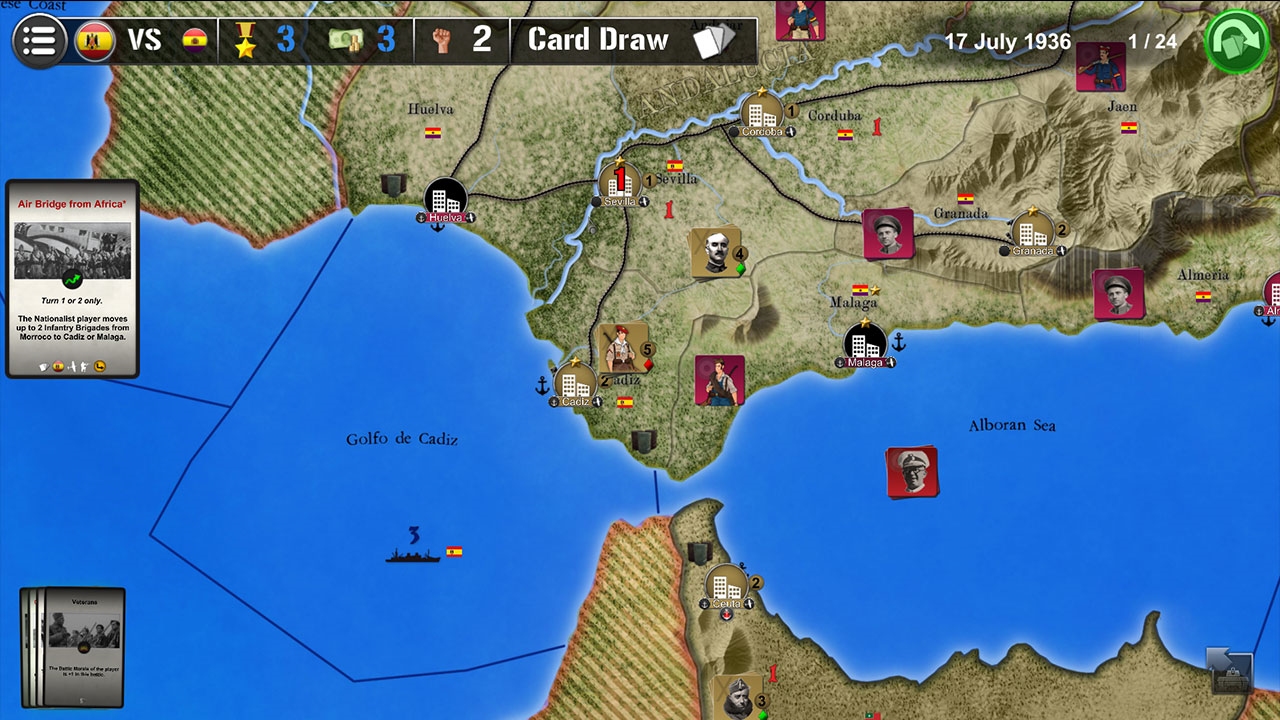 You wouldn't know it from the Steam DLC list, but Strategiae have been wooing Spanish strategy gamers this past month. Only available via the official site at present, Wars Across the World's latest pair of modules facilitates 20th Century civil war in the Iberian peninsula and - weather and Drake permitting - 16th Century amphibious invasion of a stroppy, heretical island off the French coast. From a distance the former scenario, the largest yet released for WATW, looks like Espana 1936 for people with limited patience/pocket-money.

J is for Jaw-jaw 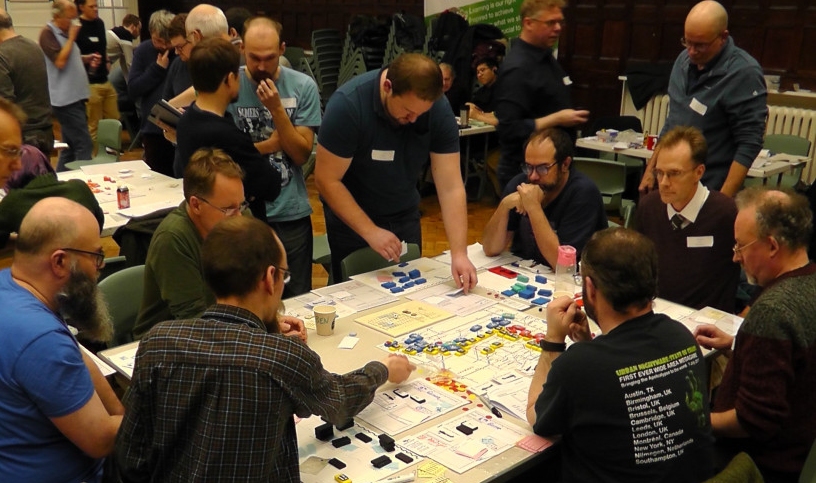 Joe Robinson, Wargamer.com's majordomo, marked the Armistice Centenary by participating in a Great War megagame in London. His write-up provides a fascinating glimpse into a form of multiplayer far more evocative, in many respects, than computer simulations of the same conflict. Perhaps it's time some brave studio shunned the solo gamer completely. Perhaps there's room in this novelty-shy neck-of-the-woods for a digital wargame focused on cooperation rather than annihilation, horse trading rather than shell trading.

K is for Knot Rule the Waves 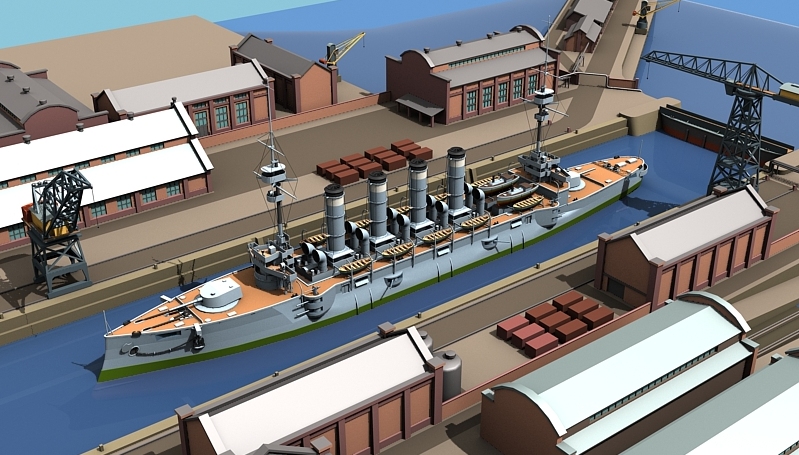 Game-Labs is looking for testers for Ultimate Admiral: Dreadnoughts, an upcoming naval wargame that must be knitting brows and pursing lips at Totem Games and Naval Warfare Simulations. The concept sounds remarkably similar to Rule the Waves, but GL's talented art department, infallible instinct for GUI design, and willingness to embrace platforms like Steam could well ensure UAD has the higher profile.

L is for Library love 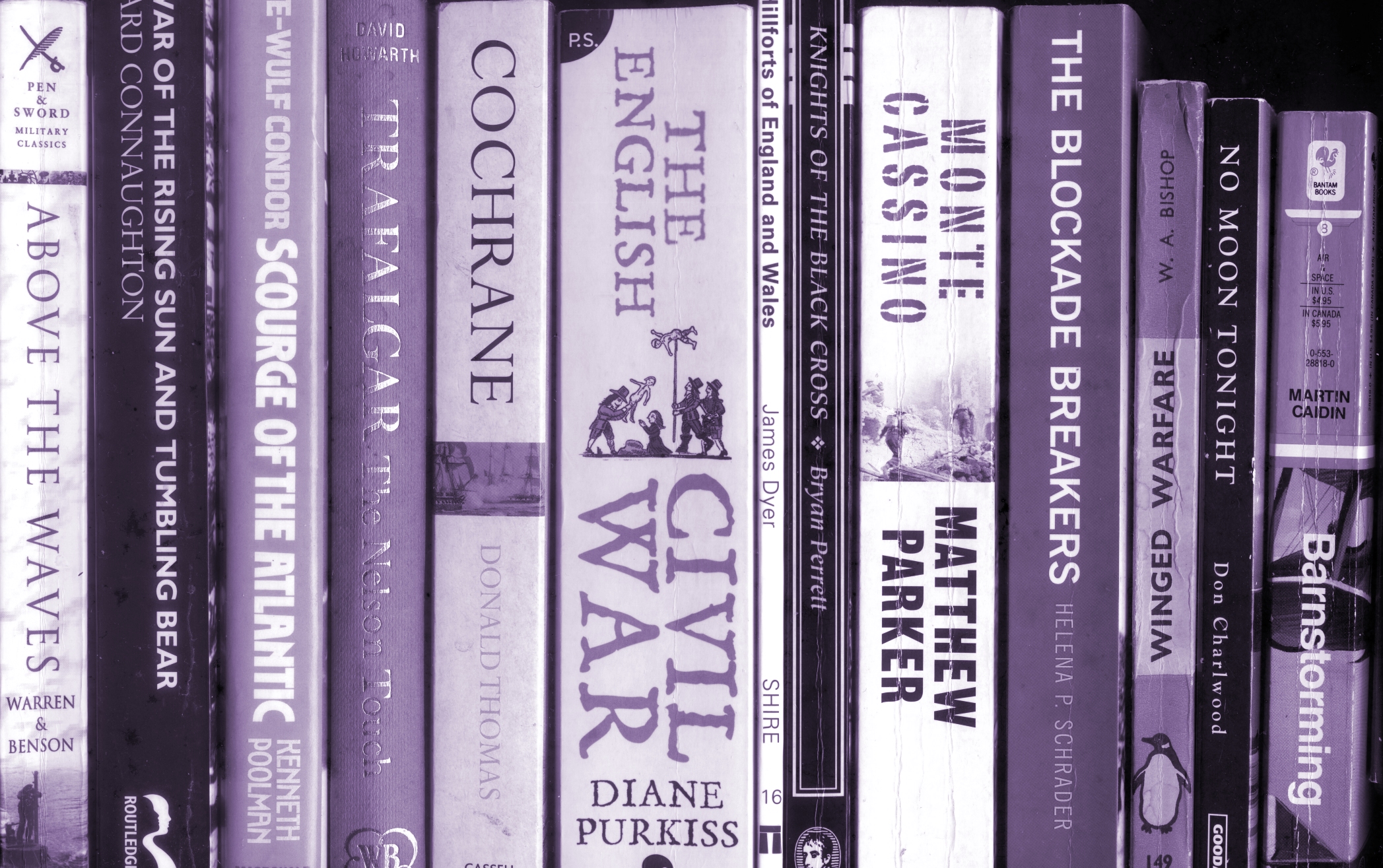 A big thank you to everyone who responded to last month's Reading Room appeal. As Joyce still has unfilled book nooks, I'll be monitoring the relevant comments section for at least the next fortnight. If you've just remembered a tome that either dovetails with a specific sim or wargame nigh-perfectly, or screams out for gameification, lionise it with a few well-chosen sentences, and Joyce or myself will do the rest.

M is for May include Jerboas 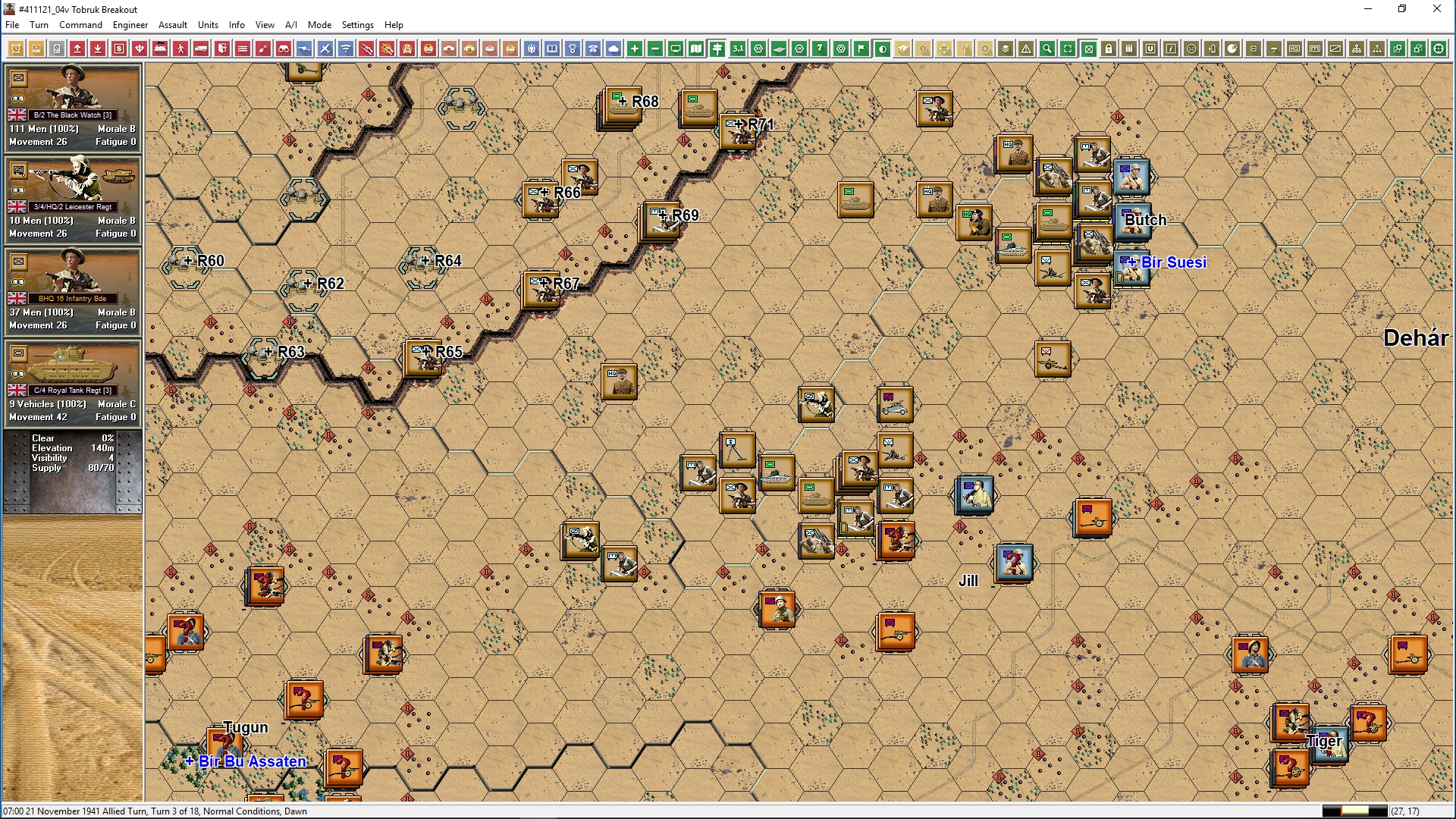 The fact that the design notes for the just-deployed Panzer Battles: Battles of North Africa 1941 are longer than many wargame manuals tells you all you need to know about the effort and scholarship that has gone into this mammoth 115-scenario, 8 OoB project. In feel and mechanics not a million miles away from the series highlighted in the next para, PBBNA covers Operation Mercury as well as the eventful first year of the Desert War. One of the game's engagements – Mersa Brega - appears in the exemplary multi-title PB demo.

N is for Nam next

Like a pykrete aircraft carrier or the chicken gulag I spent most of last weekend struggling to dismantle, Talonsoft's Campaign series is virtually indestructible. Still going strong more than twenty years after its first appearance (East Front, 1997) the engine's innate flexibility, intimacy, and plausibility have helped it endure, as, in latter years, have the ministrations of a dedicated band of fans known as the Campaign Series Legion. Having completed Matrix Games-published overhauls of the original Talonsoft titles, the Legion are currently working on the first entirely new CS game since 2001. Due next summer, Campaign Series: Vietnam will ship with around 140 carefully researched scenarios.

O is for Oceania or bust 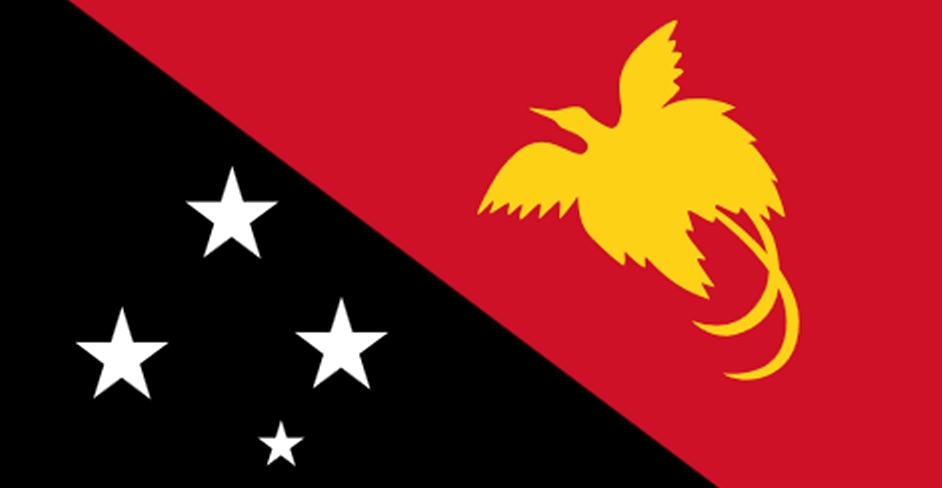 Early accessible early next year if all goes according to plan, commerce-laced bush pilot sim Deadstick Simulator will launch with a fictional 5000 square mile map inspired by Canadian and Alaskan scenery. If sales justify further development, REMEX will then take their creation to warmer climes via DLC. Papua New Guinea has been mentioned as one possible phase 2 destination.

P is for Prenatal pace notes

Little-Known Fact #128. My kid sister was born in the back of a Ford Escort. Happily for all concerned, the Escort in question wasn't being driven flat-out along New Zealand dirt tracks by ex-WRC2 rally driver/current DiRT Rally 2.0 tester Jon Armstrong at the time. 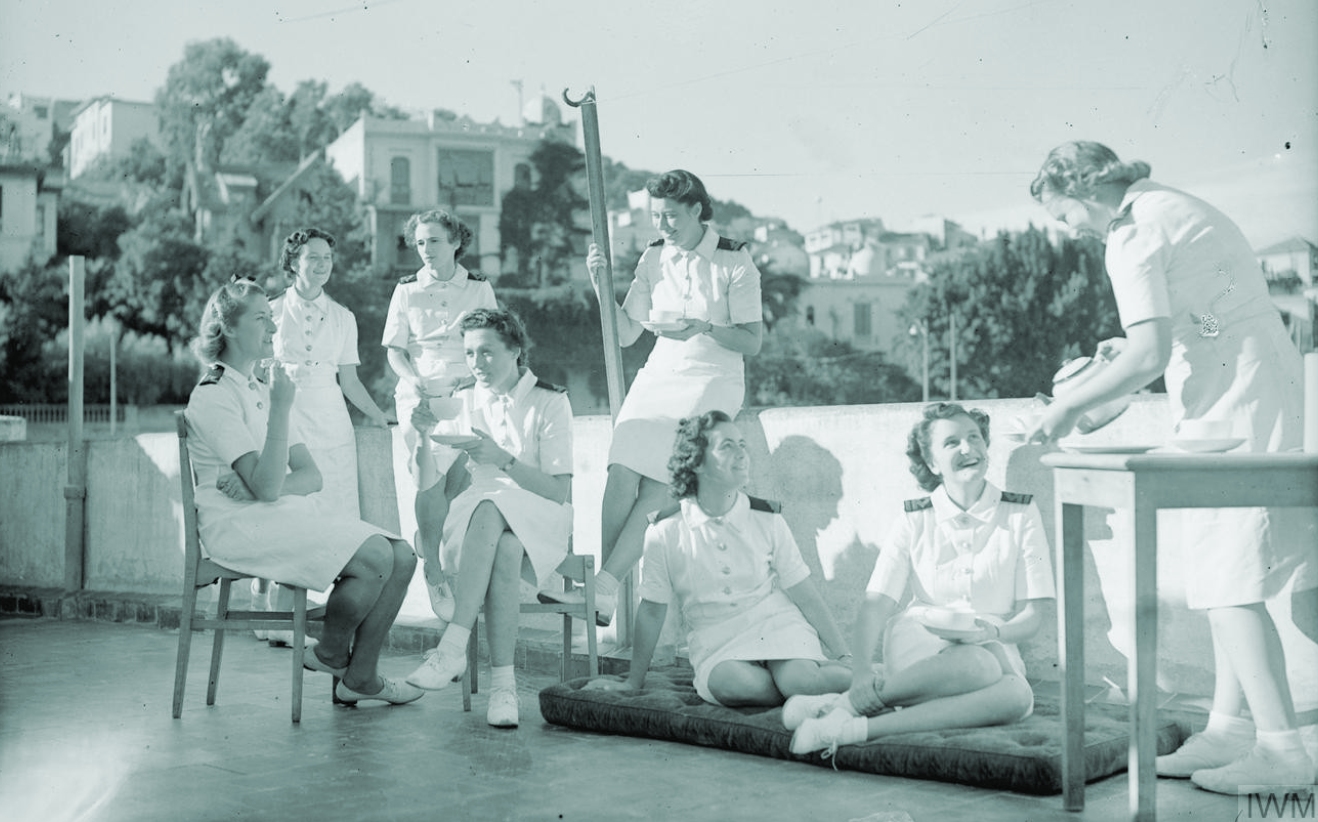 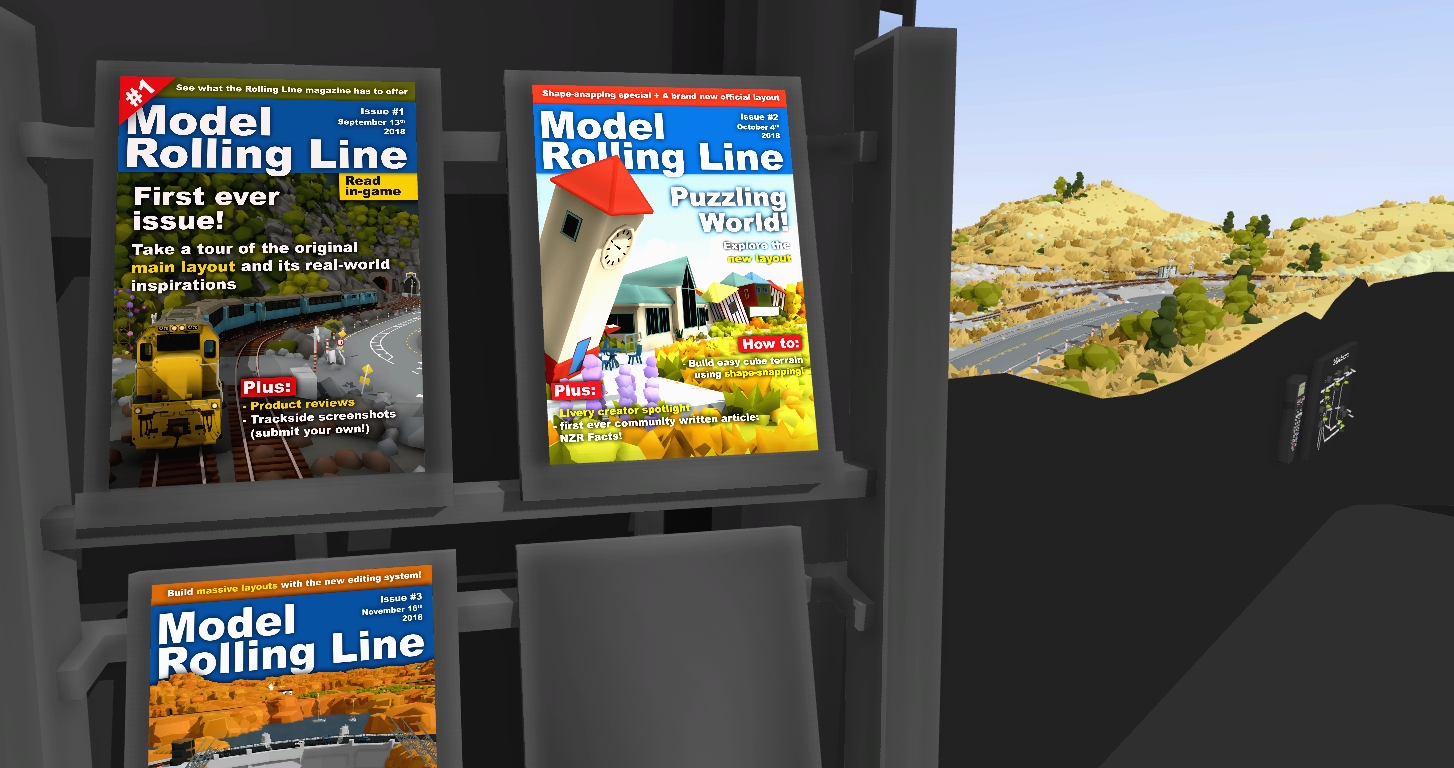 Gaugepunk Games have come up with a brilliant way of enriching their ingenious railway modelling game, Rolling Line. There's now a magazine rack in the main layout area on which issues of house periodical MRL appear when ready. The short but lavishly illustrated mags provide modelling tips, insights into the railways and locations that inspired the default NZ layouts, and pieces on the best fan-made layouts. In glorious contrast to wood-pulp equivalents like the venerable Railway Modeller, once you've read about a creation like the huge 'Nevada, Arizona, and Utah' you can enjoy it in person simply by clicking a page panel labelled “Visit in-game!”.

S is for Spitfire surprise 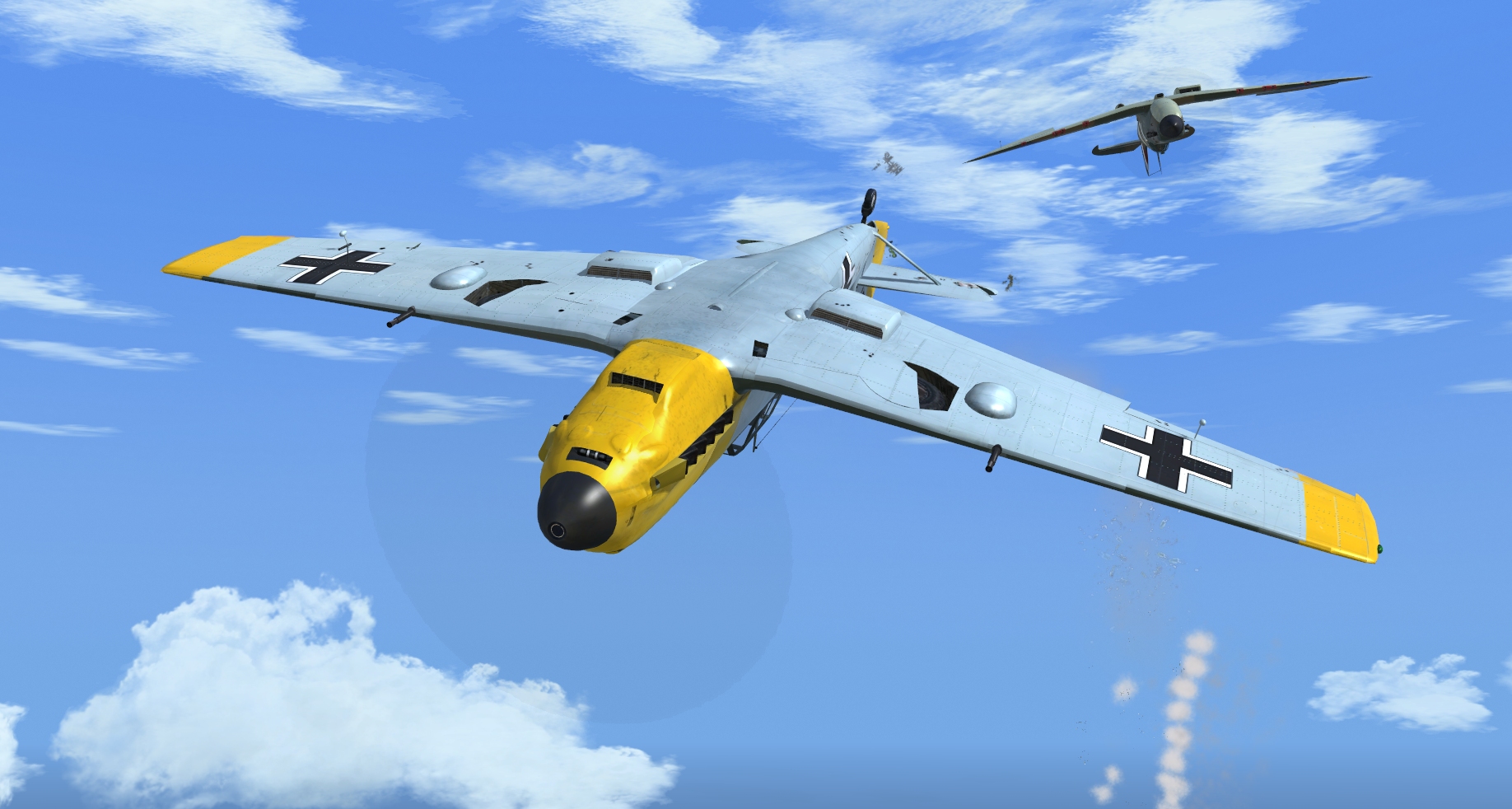 When Battle of Britain sim Wings Over the Reich shipped without a flyable Spitfire back in September, a few genre chroniclers, myself included, grimaced and grumbled. Happily, Old Brown Dog Software have had a rethink and are no longer planning to introduce Mitchell's Heinkel-influenced icon via a payware expansion pack. Customers are to receive the Hurricane's glamorous comrade-in-arms gratis together with an equally free Battle of France adjunct “sometime next year”.

T is for Terrific Tomcat trailer

U is for Un-American activity

The arrival of Armored Brigade has prompted some interesting forum discussions on the subject of doctrine. Some AB users have suggested that an AI attack by the Russians should be conducted in a quiet different manner to an AI attack by, say, the US or British Army. It's an appealing idea but, as posts like this one and its follow-up indicate, creating doctrine-infused AI for a 'what if' wargame like AB would present interpretative challenges as well as technical ones.

V is for VR vacillation

Waiting patiently for the first sub-£200 VR headset isn't easy when there are videos like this doing the rounds. The featured aerodyne is a Bensen B-8 gyrocopter made for X-Plane by VSKYLABS, an outfit with a penchant for the peculiar. The riverine corridors it's hurtling down are part of Quatam River Airport, a stunning bush scenery add-on fabricated by the appropriately monikered PropStrike Studio.

W is for Wrath of the Steam god

Steam God is angry with the makers of Bus Driver Simulator. For unknown reasons it has cast out KishMish's upcoming Moscow Metro game Metro Simulator 2019. The Russian devs suspect the expulsion has something to do with a misunderstanding regarding another of their titles ("I think the only explanation is in a recent update of our pastiche game VCB: Why City. After the update a lot of people started writing duplicate reviews incorporating a copied game description because they thought it was funny. I suspect Steam's security system might have considered this review manipulation which it isn't.") but can't be sure because Steam hasn't responded to any of their appeals for information. Until the pickle is sorted out, you'll have to go here for MS2019 progress reports.

X is for Xpected in March

The follow-up to Rule the Waves, a visionary naval wargame that combined top-down turnless battles, with warship design, fleet management and unscripted globe-girdling 1900-1925 campaigning, won't be with us before March next year. As devs Wallin and Miller are grappling with game-changers like aircraft, radar and sonar this time (RTW2's seapower sagas will run from 1900 to 1955) the modest slippage is hardly surprising. 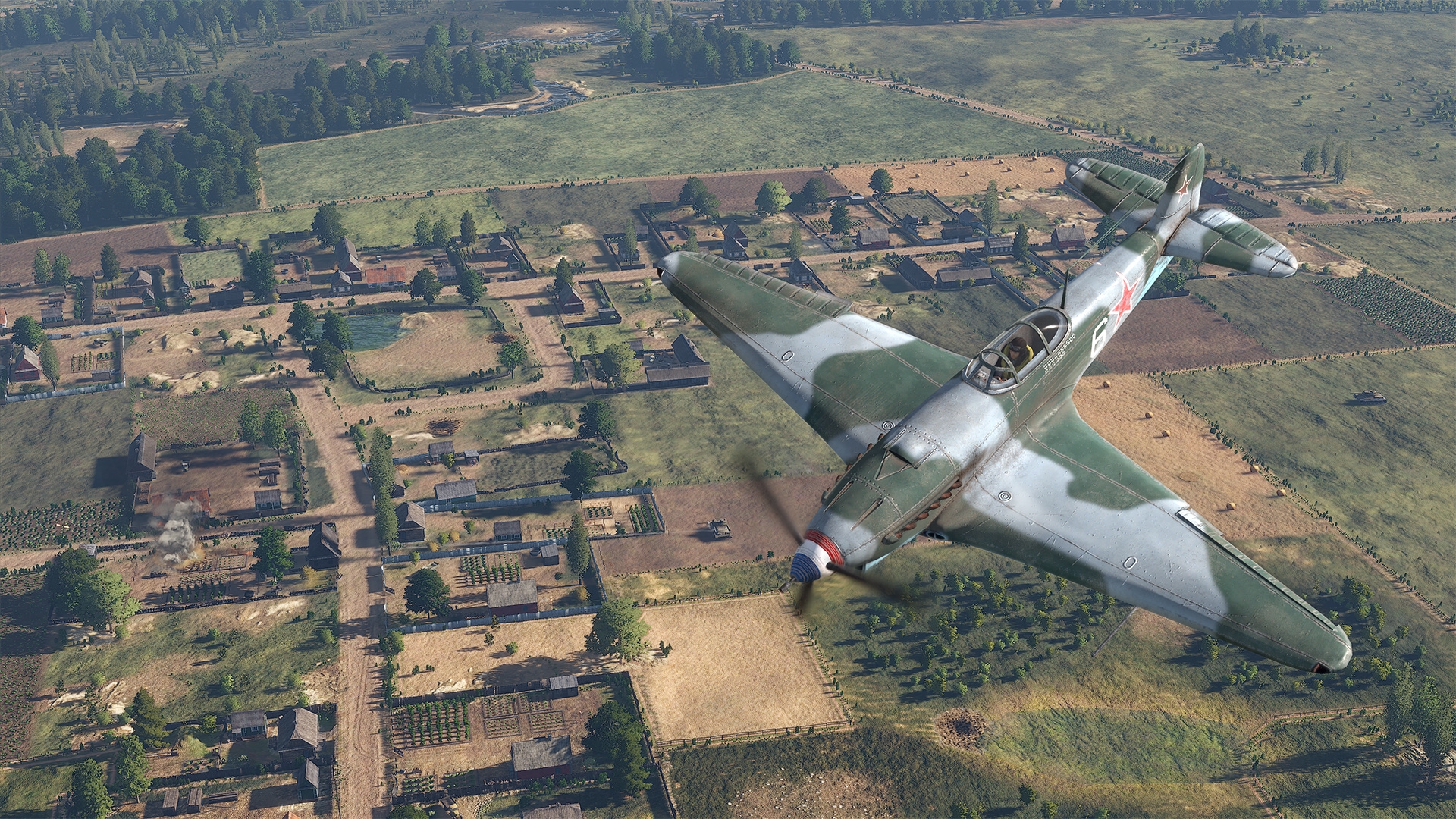 Troubled industrial relations at Eugen earlier this year seem to have had little impact on ambition at the studio. The first Steel Division 2 dev diary describes a new dynamic, dual layer approach to campaigning guaranteed to gladden gristly grog hearts. In SD2 real-time tactical tussles will be the optional offspring of turn-based battalion activity on handsome Eastern Front theatre maps.

Z is for Zig Zag Railway

Free Microsoft Train Simulator-impersonating rail sim Open Rails deserves to be Flare Pathed more often. No longer dependent on an existing MSTS install, the sim is best approached via the friendly self-contained Starter Kit, an easily installed package that includes a dramatic prototypical Australian route amply provisioned with steam-era rolling stock and scenarios. Thanks to tutorials added on Monday even if you don't know a cylinder cock from a petticoat pipe you shouldn't have any problem persuading the antipodean iron horses to go and whoa.