SystemSoft, the devs behind Daisenryaku, Panzer General’s long-lived Japanese cousin, don't make a habit of courting English-speaking desktop generals. Quite why they've decided to sally across the platform border with Daisenryaku Perfect 4.0 is a mystery. You have to wonder whether there are enough deep-pocketed, rough-edge-tolerant nostalgics amongst Steam's customers to justify the experiment. 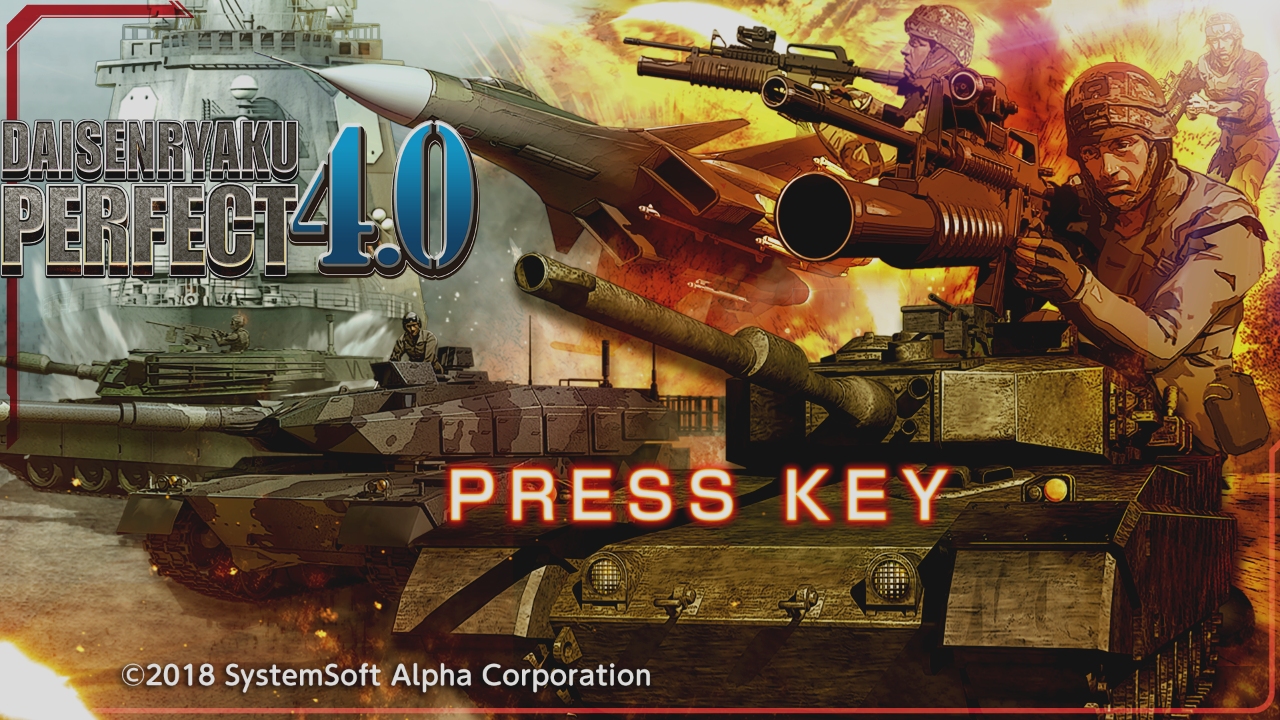 As the released-on-Tuesday, £39-until-October-8 Daisenryaku Perfect 4.0 has only resided on my HD for just over 24 hours, I'm really not in a position to pass judgement on aspects like AI quality yet. What I can do is give you a rough idea of what to expect if you've never encountered the series before. 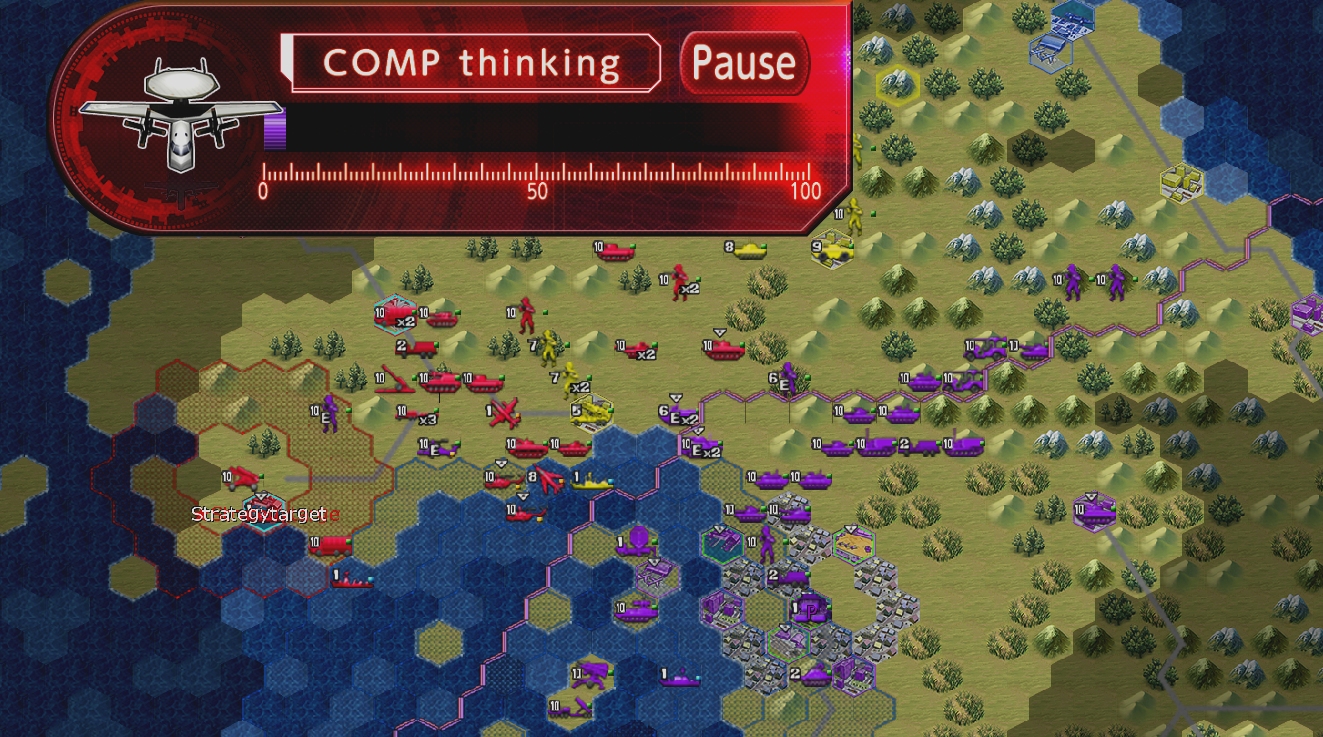 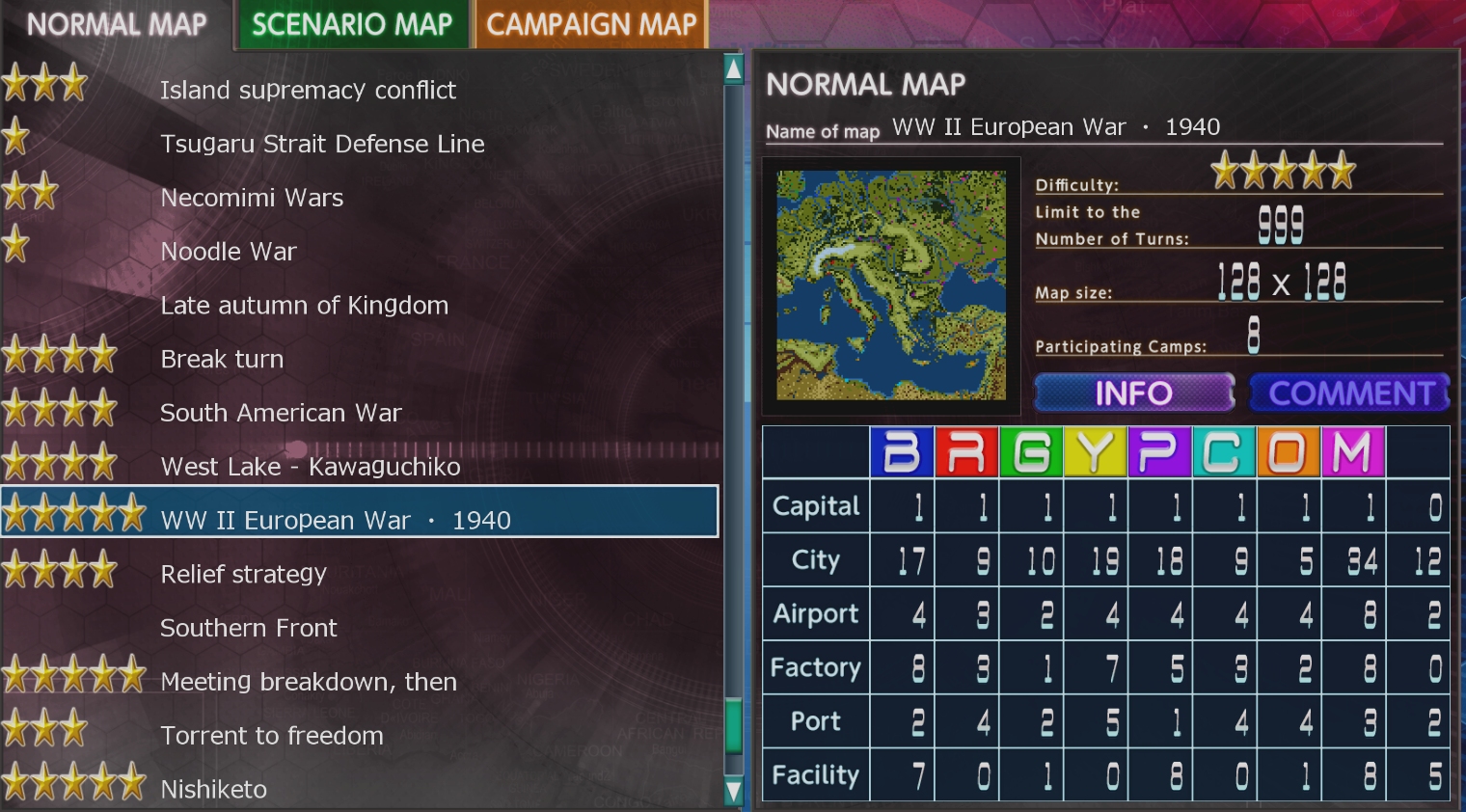 The mountainous stack of handmade maps together with the bundled map/scenario editor arguably takes the sting out of “Where's the random map generator?” complaints. The majority of venues simulate real geography but there are also whimsical and abstract slaughter stages. Between scuffles on the Falkland Islands, the Korean Peninsula, and the Normandy coast you're free to wage war on the Moon, giant plates of noodles, and islands shaped like banking F-15s. 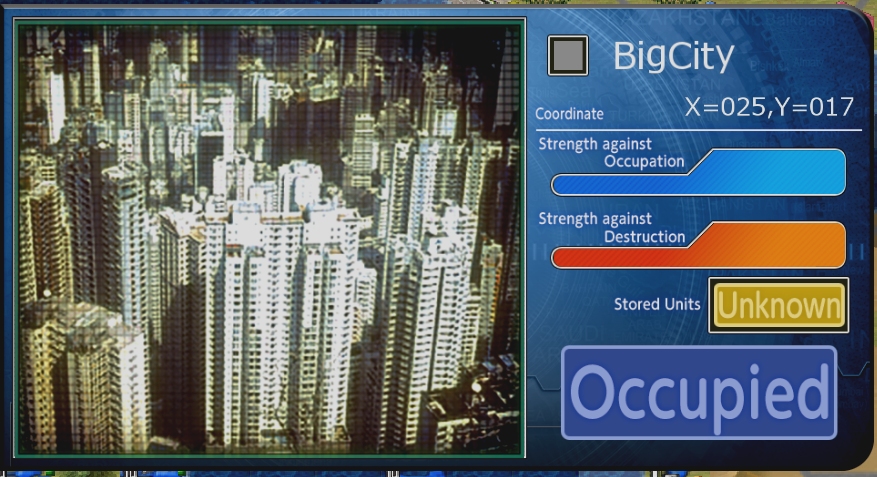 In 'Free Mode' you commission units as you conquer, using income generated by captured cities. In  'Neo Combat Master Mode' (a.k.a. the campaign) there's no on-map production, and core units carry over Panzer General-fashion. Whichever mode you select, games never seem to drag, an uncomplicated turn structure and an option to let the AI handle units with movement points remaining sees to that. Faint PG echoes are everywhere, but DP4 feels slightly more sophisticated and colourful thanks to Advance Wars-reminiscent combat animations... 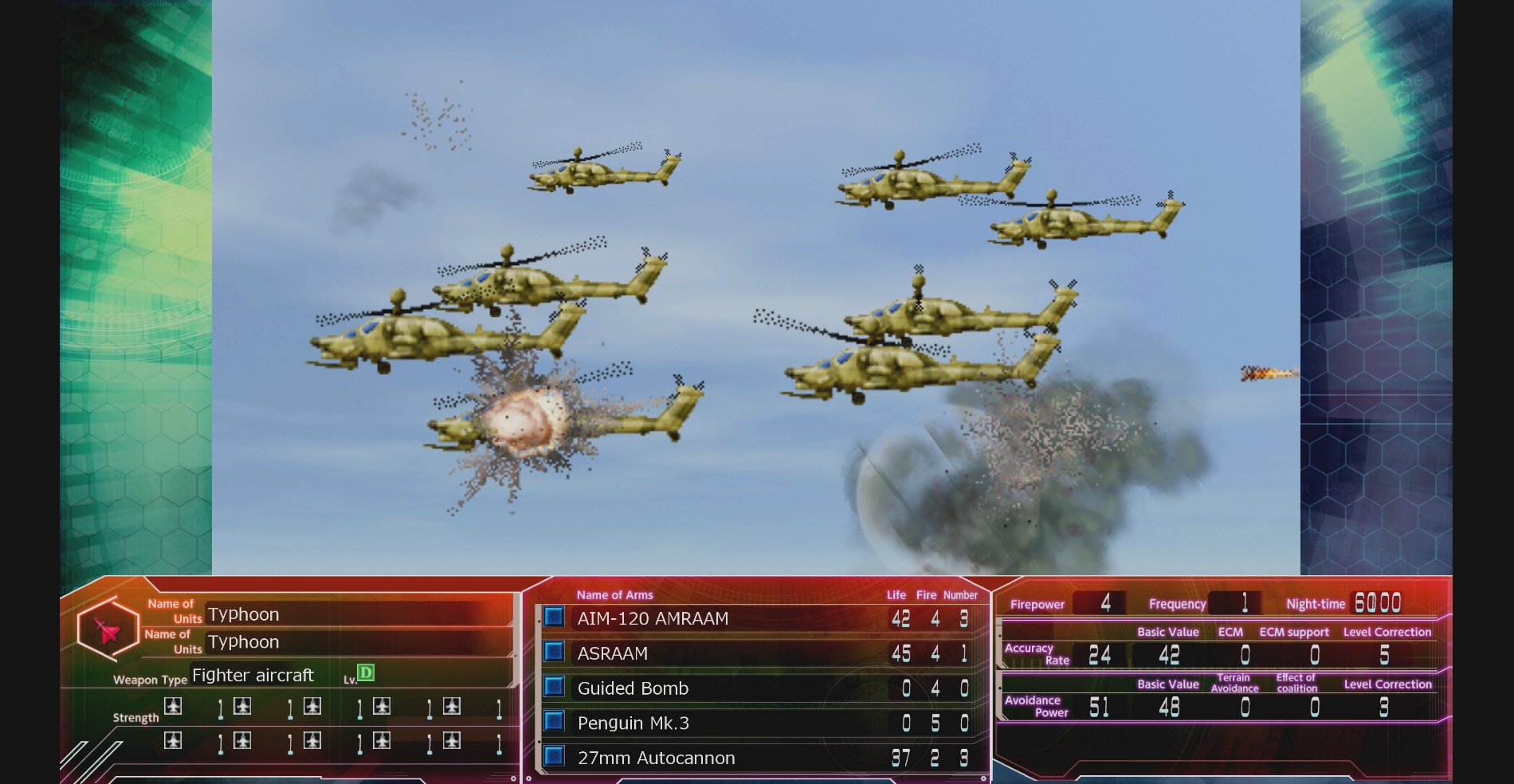 ...battle subtleties like friendly fire and ECM, and a larger selection of unit commands. Pillbox, bridge and road construction is possible in most scenarios. By switching weapon packs at friendly airbases aircraft can be customised mid-conflict to suit new threats. Most units can be split and merged. Transport options are extensive with Russian-dolling (Infantry → APC → transport aircraft/ship) supported. There's much more to DP4 than nudging a wall of steel slowly across a map. 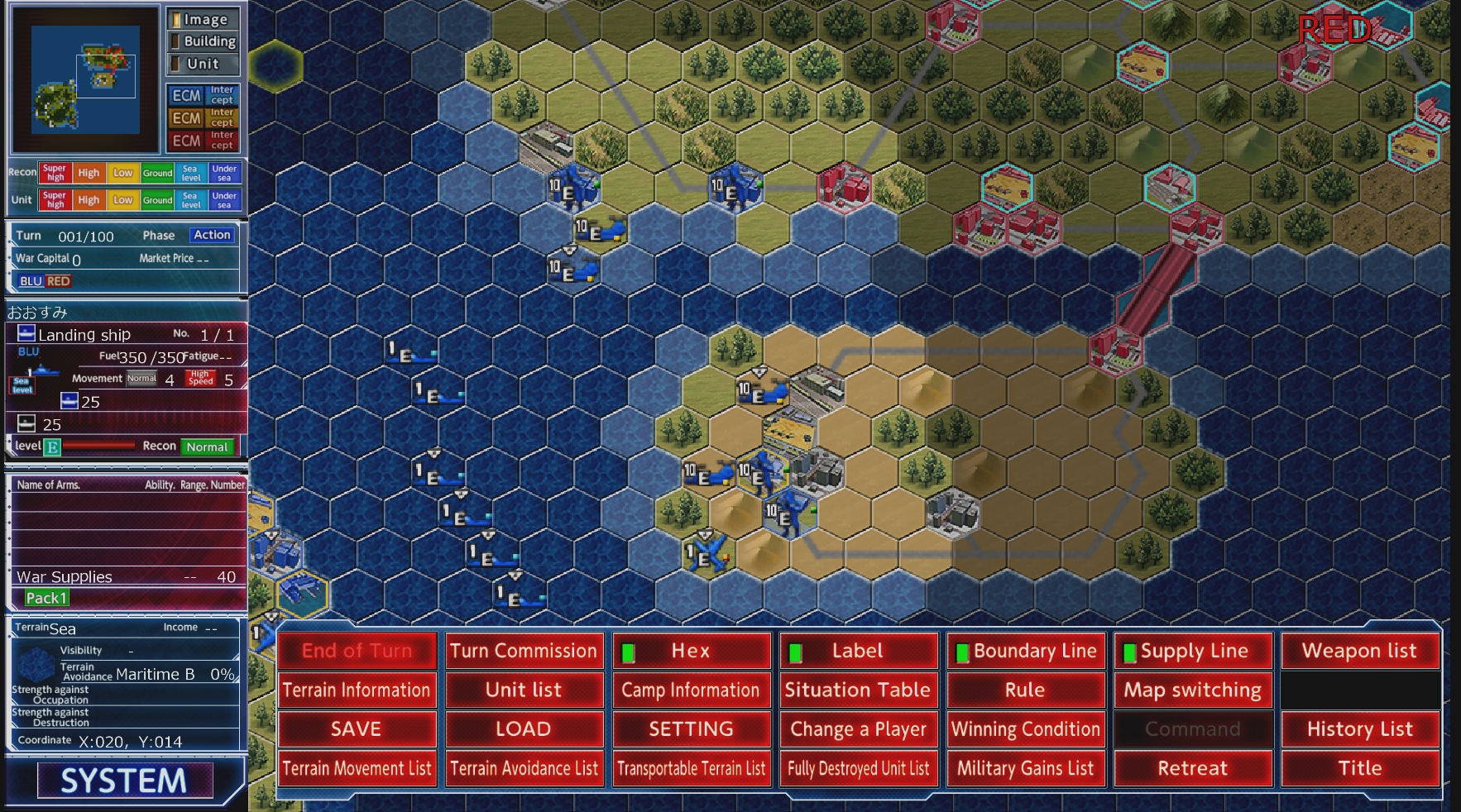 It's a good thing the movement and combat mechanics are so intuitive, and the manual relatively decent, because the creaky GUI and uneven, incomplete English translation regularly obfuscates unnecessarily. Mousewheel map zooming? Mini-map clicking? Permanently on-screen 'end turn' button? Fat chance. From its garish, clumsy menus and misleading button labels to its blurry sprites and unsightly overflowing fonts, DP4 cries out for a usability and aesthetic overhaul. While the awkwardness and ugliness doesn't prevent enjoyment it really should be reflected in the price tag. 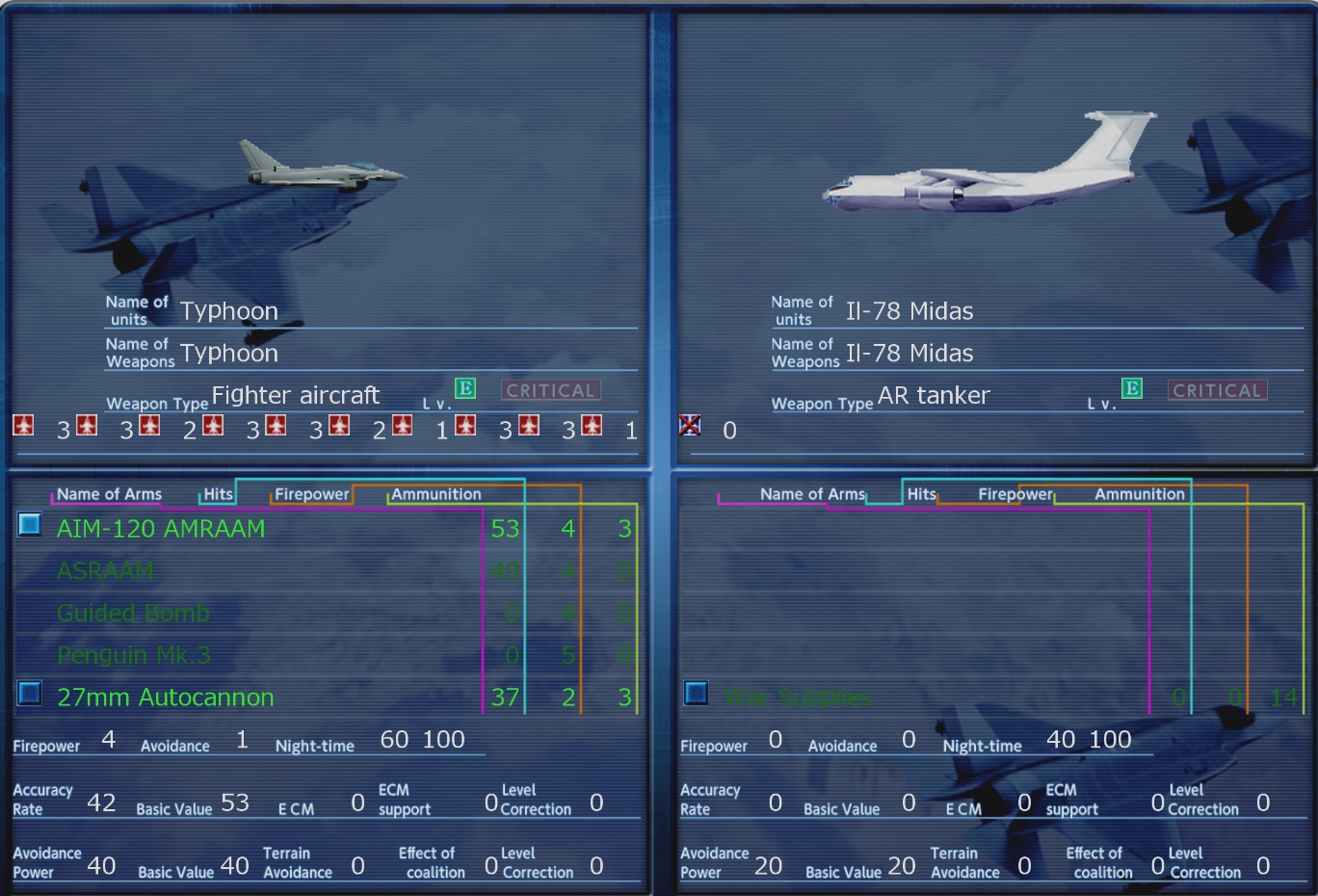 I like what I've seen of the AI thus far. The computer seems to produce balanced strike-forces and employ them in a concerted, terrain-sensitive way. What I've yet to investigate is whether silicon commanders can mount amphibious operations and manage air assets sensibly. The way fuel and weapons are represented gives aircraft relatively long loiter times* but periodic RTBs are essential – something I hope my silicon opposite numbers appreciate.

*Munitions are individually modelled meaning an F-16 could, for instance, loose its Mavericks then linger in the hope of encountering potential Sidewinder or Gatling gun victims. 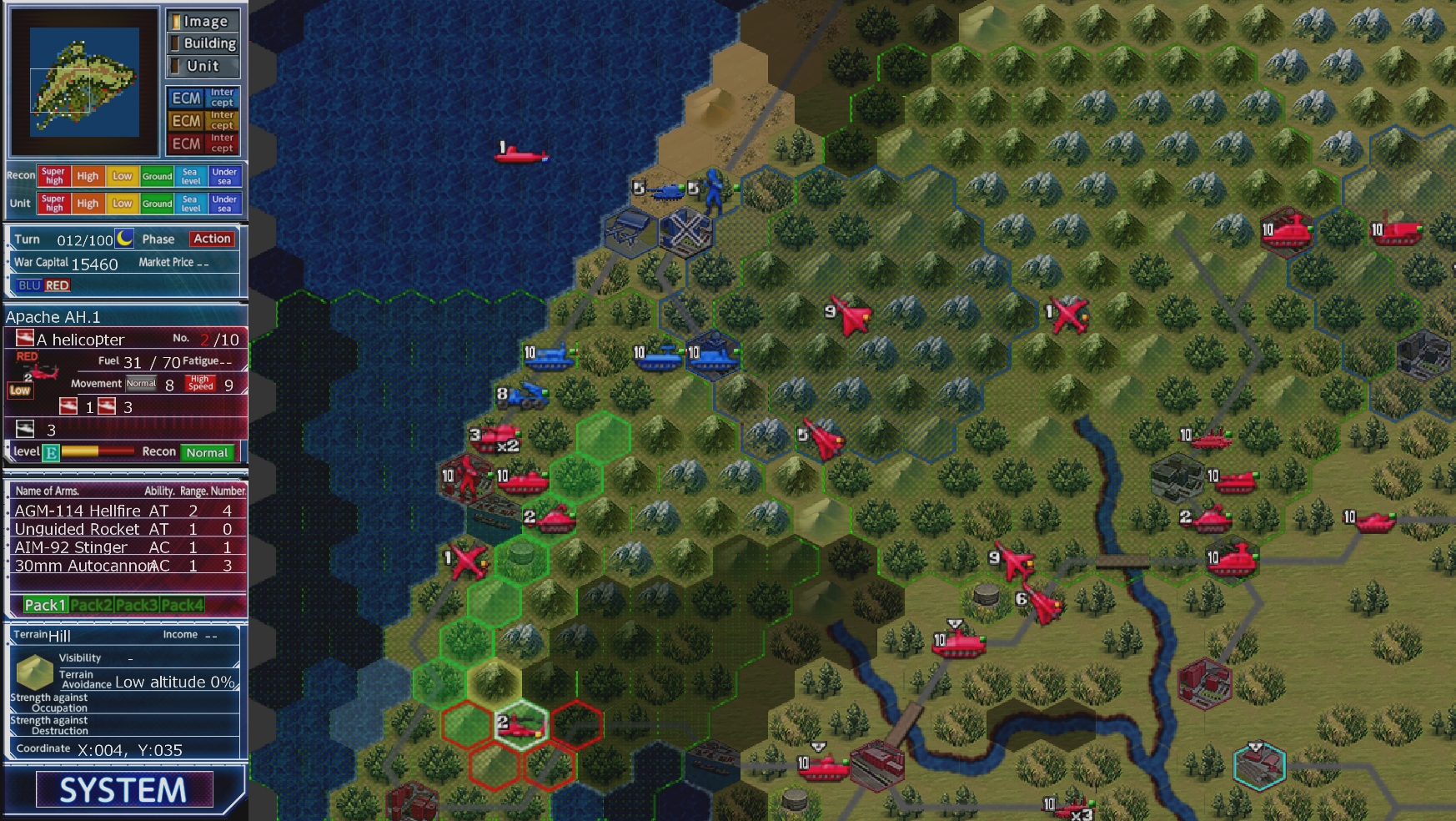 The far-from-perfect Daisenryaku Perfect 4.0 is sufficiently rich and distinctive to mix confidently with popular Panzer General descendants like Panzer Corps and Open General. Priced more competitively, I'm sure it could secure a modest beachhead in Grognardia given time. However, if the entry fee remains £46* it risks being cut down moments after leaving its bullet-pecked Pomornik.

The first instalment of Neville Novichok's Wings Over the Reich diary wasn't exactly incident packed. The frustrating shyness of the Luftwaffe between July 10 and July 14, 1940 meant my Brylcreemed proxy had ample opportunity to admire comely cockpits and clouds and grumble about missing multiskins and tutorials during his first week as a Battle of Britain Hurricane pilot. When Biggin Hill-based 32 Squadron finally crossed contrails with the nefarious Hun, Neville bagged one boisterous Bf 109 but returned home to find two blast pens vacant and two ground crew teams subdued.

The winner of an impromptu “Draw a Boulton Paul Defiant” competition in the White Hart last night, I've been tasked with completing Dave Clough's* mess room mural. While I don't have Cluffers' natural flair with pencil and paintbrush, with a little help from grids and Sergeant Garner, the armourer who painted the cartoon carthorse on the side of Dobbin, the squadron hack, I'm confident I can produce a passably pretty backdrop for 32's growing collection of sortie souvenirs.

No time for fresco art this morning. On the stroke of ten the majority of 32's Hurricanes departed for a patrol over Margate. On reaching our seaside destination we discovered that the Kent resort had traded its pier* for a Mephistophelian mobile made of flak puffs and Heinkel 111s. Some distance ahead of my comrades (station keeping is such a bore) and nicely positioned above and behind the small, seemingly unchaperoned bomber formation I selected one of the outermost 111s and commenced an unhurried stern attack.

*WOTR doesn't do piers at present 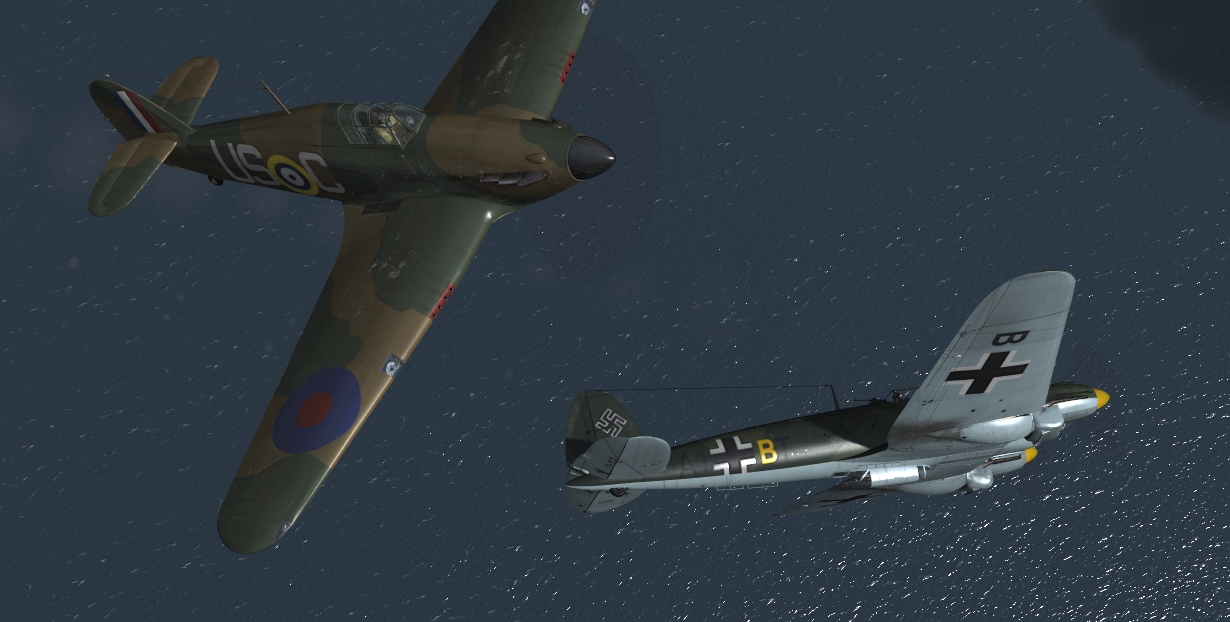 Raked by Browning MGs completely oblivious to dirty air, the flying machine fixed like a cobwebbed fly in the centre of my rock-steady reticule was soon tumbling towards the drink. Assuming I'd downed my first multi-engined E/A* (a glimpse of flame or chutes would have removed all doubt) I immediately went after a second. By this time, however, the rest of 32 had arrived and the portion of sky surrounding the intruders was buzzing like an overturned beehive. 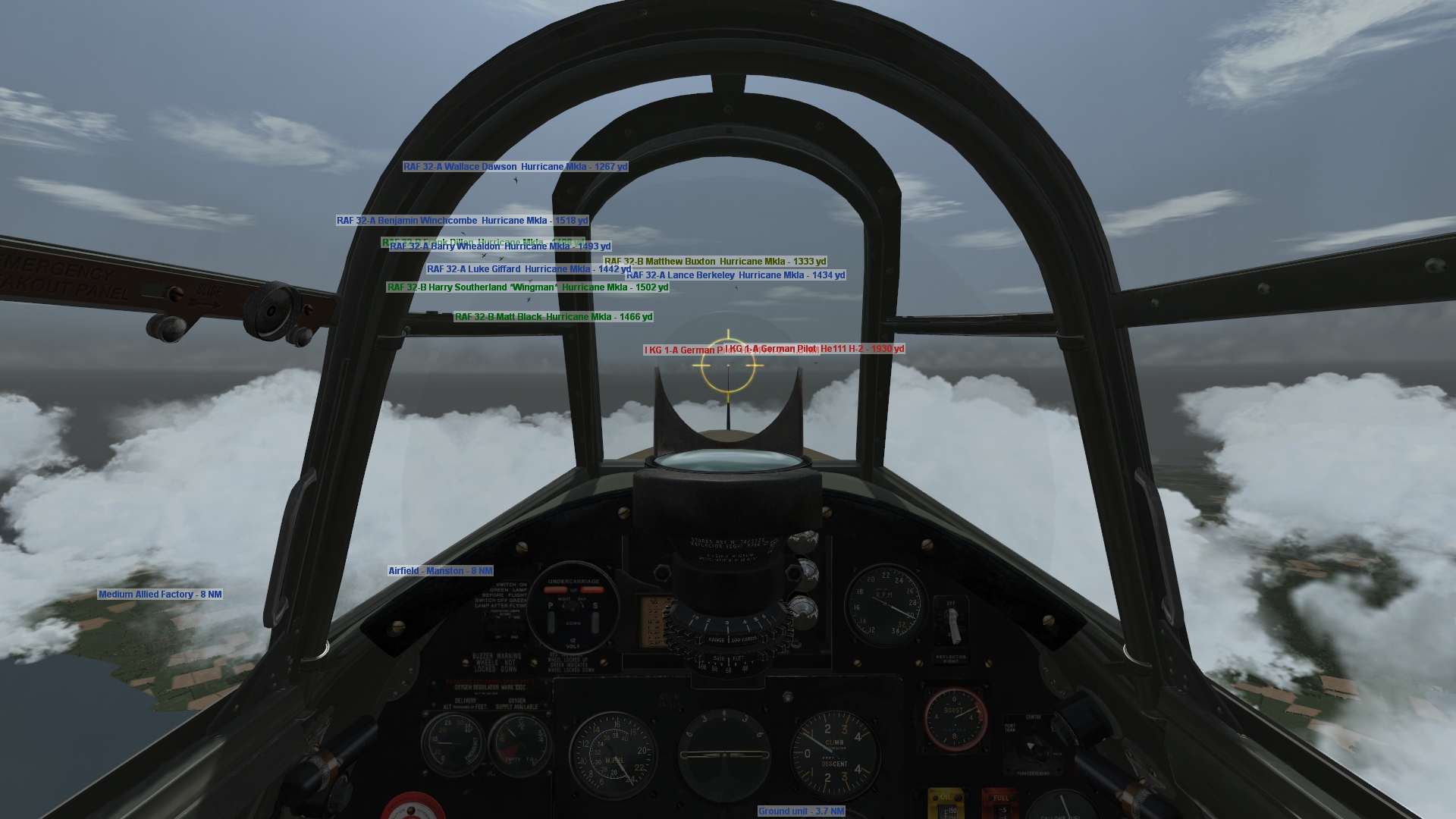 A label indicated that one of the British bees was none other than Lance Berkley, the clot whose demise I thought I'd witnessed the day before. The lucky? immortal? Mr Berkley didn't disgrace himself on this occasion. He left the suicidal aerial antics to three of his fellows. As I hurried towards the throng, two hurtling Hurricanes collided and in the fiery chaos that resulted a third RAF crate was bowled from the blue too. Madness. Utter madness. 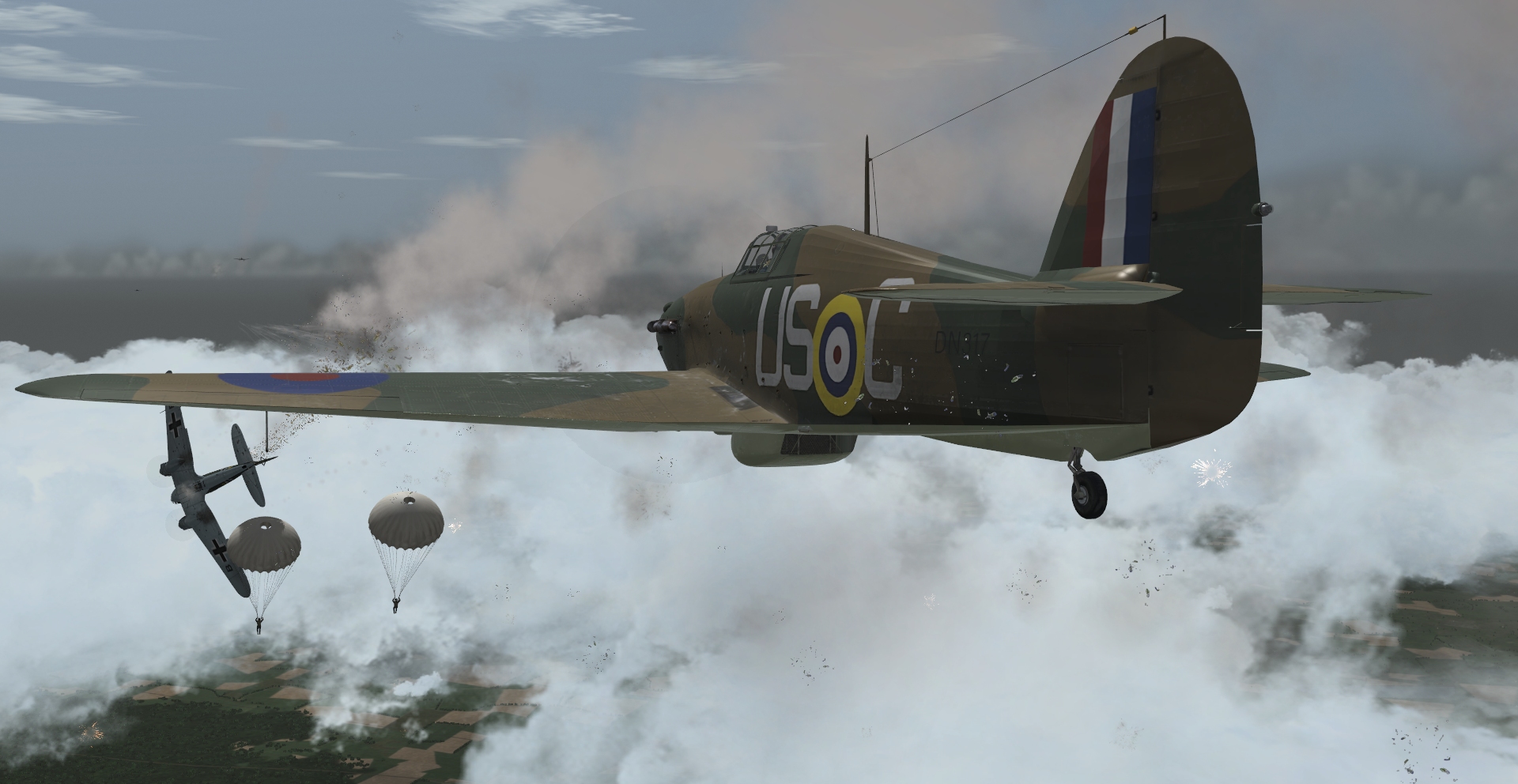 My second Heinkel was just as docile under fire as my first. Absorbing lead as quickly as I could dispense it, the big dumb brute eventually dropped its starboard wing, disgorged two of its five occupants, and entered a steep, irrevocable dive. Satisfied I'd done my bit and aware that the coiled snakes of MG ammo in my wings were now little more than worms, I broke off and headed for home.

"B" Flight's debrief board made for depressing reading. Dillon, Southerland, and Buxton all dead, and, judging by the ammo expended stats, only 'Buxom' made any meaningful contribution to the Heinkel cull. 'A' Flight fared better, but not by much. 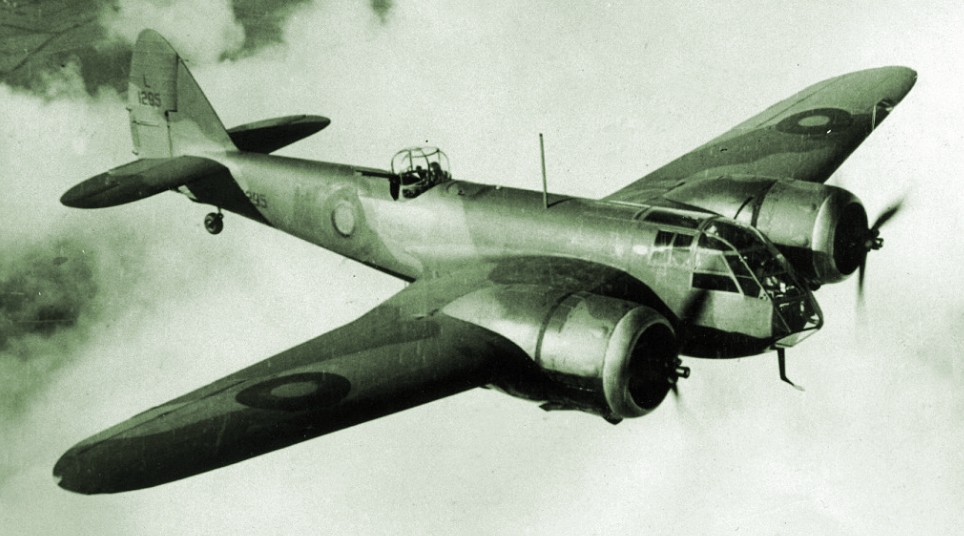 No ops today. 32 was too busy licking its wounds. With Sergeant Garner's assistance a rather splendid Bristol Blenheim was added to the mural in the mess (Just below the dartboard, I suspect its pristine paintwork won't stay pristine for long) together with a slightly less convincing Wimpy (In our defence, we were working from memory and a silhouette in R. A. Saville-Sneath's aircraft recognition paperback).

Heard that my claims for yesterday's Heinkels have been accepted. The second 111 fell to earth in a hop garden near Margate. There's a snap of it in today's Daily Express with the caption “Savaged by a Spitfire” which prompted a few wry smiles around the station.

My new wingman is Stephen 'Frosty' Haw, a towering blonde-haired Scot I trained with at Sealand. He turned up astride a brand new Brough Superior Golden Dream that instantly drew an admiring crowd, and, within the hour, was flying his first patrol - an uneventful stooge over Chichester - as a member of 32.

After three days of beachcombing, birdwatching and bread-and-butter pudding eating at Aunt Nettie's place in Steeple Coombe, it feels decidedly odd to be back quartering the sky in US-C again. Today's patrol over the Strait of Dover promised drama yet passed without alarums of any kind. Channel convoys and ports on the south and east coasts are reportedly getting it in the neck so you'd think we'd encounter E/A more often.

Yet another aggro-free foray. My eighth in ten outings. This is getting ridiculous. Seriously thinking about quitting the RAF and joining a more exciting service. I wonder if the WVS are recruiting. 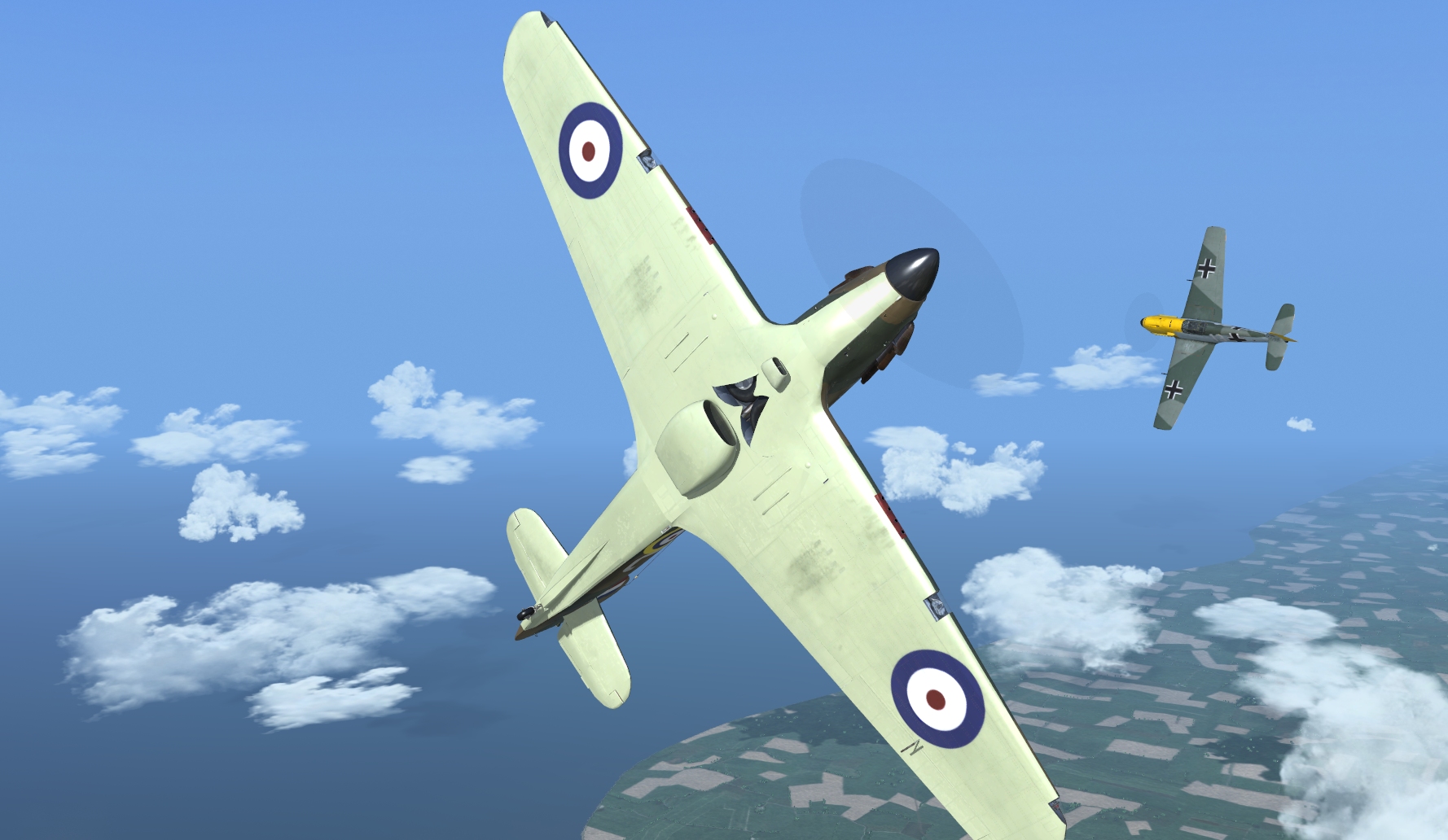 Be careful what you wish for! No shortage of excitement today. After a horizon twirling tussle with four Emils near Tangmere in which I came within a whisker of taking my fourth scalp, my crate developed engine trouble and I was forced to disengage.

The RPM issue proved incurable and before I knew it I was watching Sussex loom through the blades of a frozen Rotol constant speed propeller. When the landing gear refused to deploy I really started to sweat. Suddenly all nearby fields looked ridiculously small, the trees studding their perimeters horribly tall.

This was the last thing I remember seeing before waking up on a stretcher at Brighton General...