There's a frightening invisible monster at large in my corner of Wiltshire at the moment. It can kill you with a single touch and is completely indiscriminate when it comes to selecting victims. Should I pick up and bin that rubber glove that someone has discarded next to my front gate, or incinerate it with a gout of flame from my butane-fuelled weed burner? I just don't know. Lionising pillars of the Flight Simulator community and writing about Tiger-stuffed tank games feels totally safe in comparison. 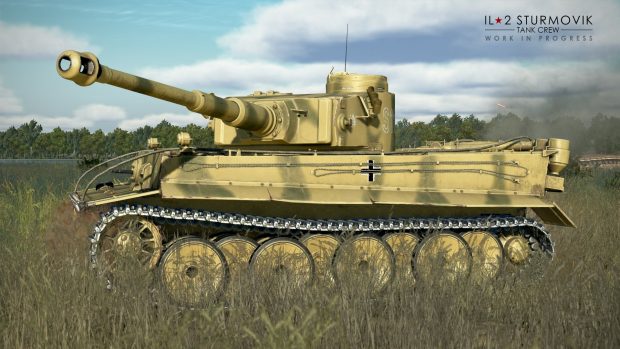 Apparently, the birch trees near Belgorod are all atremble at the moment too, despite a complete lack of wind.

The poor things don't realise that only digital Betula Pendula have anything to fear from Tank Crew: Clash at Prokhorovka, an IL-2 Sturmovik AFV spin-off soon to arrive in Early Access form. 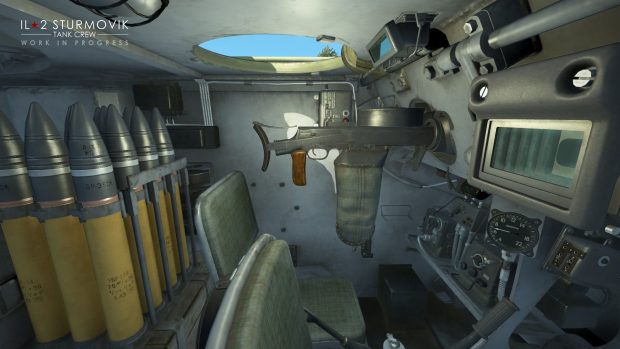 The initial version of TCCP should be in the hands of pre-orderers by the end of July and will come with beautifully sculpted KV-1s and Tigers governed by “nearly complete physics”. Those in the vanguard will be able to operate the handsome heavyweights from a choice of four stations (commander, driver, gunner, radioman/bow MG wielder) and should have ample opportunity to test the authoritative ballistics...

“We have performed significant research to model the ballistics of all the rounds used in these tanks. At the moment we plan that it will be possible to use 5 round types: AP, APHE, APCR, HEAT and HE. The types available will be historically accurate, for instance, the 76mm HEAT round was forbidden to use in 1943 because of the many cases of its premature bursting in the barrel, or there were no solid AP rounds for German guns, they used APHE. All MGs installed on the tanks will be accurately modeled as well.” 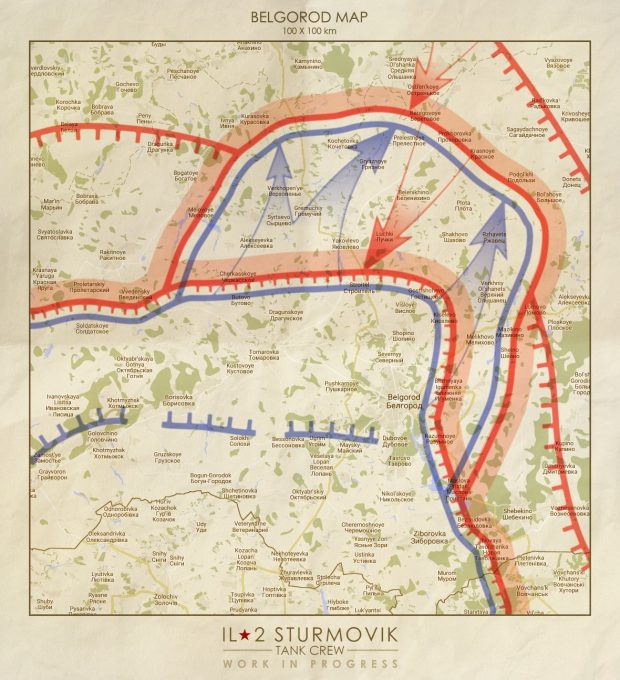 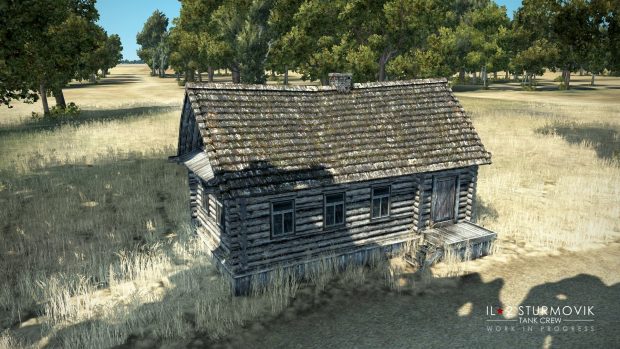 By the time TCCP is complete, the standalone (but interoperable with its aerial sibling) sim will sport crewable tank destroyers, assault guns, and AA vehicles, in addition to alternative MBTs like the Panther and T-34. The full list of driveables is a veritable Kubinka of clank...

Some Kursk scholars may question the inclusion of the Sherman – a Churchill or M3 might have been a more apt Lend-Lease machine – but you'd have to be an extremely uncharitable soul to grumble about absentees such as the T-70 and StuG in the face of such generosity. Steel Fury, the sim that will, along with Panzer Elite: Special Edition, yardstick TCCP, shipped with just three steeds back in 2007. 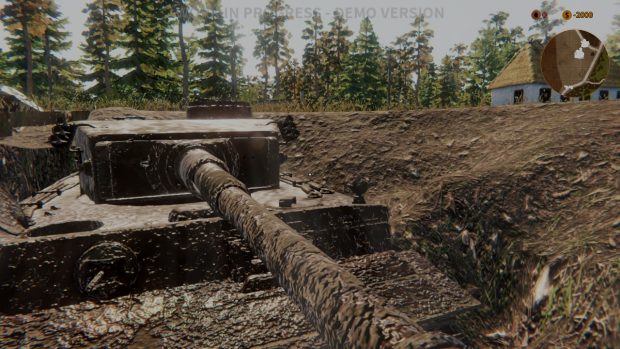 Will Tank Crew: Clash at Prokhorovka feature caterpillar-confounding bogs that, after phagocytizing your trundler, belch a pop-up along the lines of...

“Hard luck. Your Panzerkampfwagen VI Tiger Ausf. E has been eaten by a swamp. To recover it purchase Tank Mechanic Simulator.”

Almost certainly not, which is a pity as DeGenerals' upcoming armour archaeology/restoration game is, on paper, the perfect Ost Front tank sim digestif. 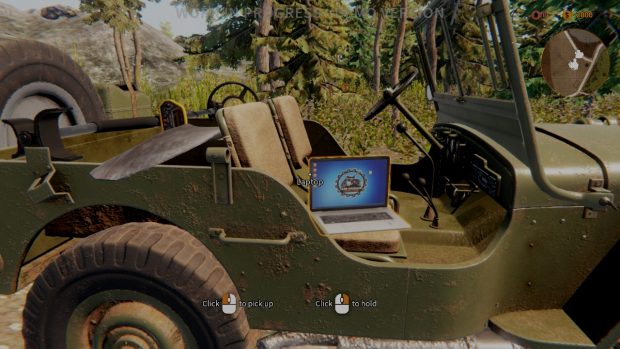 Courtesy of an early press demo, I located and unearthed my first buried behemoth yesterday evening. It was a pretty simple - perhaps too simple - process. After perusing a selection of emailed job offers, I pressed the button that swapped well-equipped 3D workshop for bucolic plot of Polish countryside. A short jeep ride later I was quartering a field clutching a disconcertingly silent metal detector. Is this thing on? A needle flicker and electronic whine eventually provided the answer and sent me scurrying back to my vehicle to retrieve a spade. 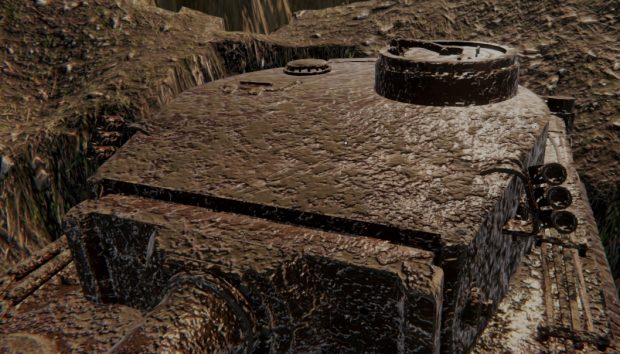 Because the job offer email had clearly identified the sunken shell slinger I was seeking, uncovering my find with laborious, crudely simmed spadework (automated JCB excavation is also an option) wasn't quite as exciting as it might have been. However, I can't pretend there wasn't something magical about seeing that familiar boxlike superstructure gradually emerge below my (invisible) wellington boots.

Assuming I can work out which button to press to extract the 60-ton relic from its hole and transport it back to the workshop (the next version of the press demo will include a tutorial) there'll be thoughts on the restoration process in a future column. A tad disappointed by the lack of detective work and physics puzzling in Tank Mechanic Simulator's discovery and recovery phases, I'm hoping to be won round when the spanner twirling and sandblasting begins. 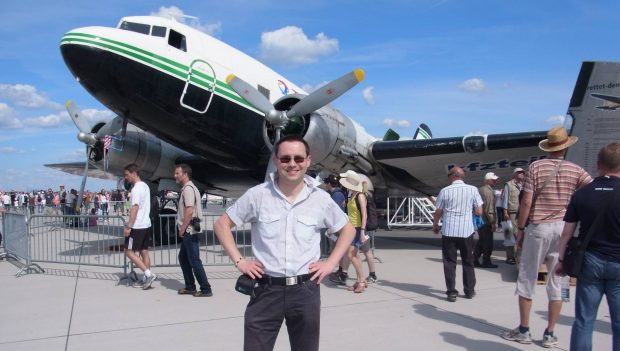 Typing 'André Lederer' into flightsim.com's file repository search engine reveals over 1300 freeware adjuncts for Microsoft Flight Simulator, the most recent of which is less than a month old. While the scale of this unselfish creativity is striking, it's the focal point of André's efforts that truly startles. Unlike the majority of his peers, the man who heads the add-on outfit known as Lionworks, jumped off the expensive/exhausting sim upgrade merry-go-round at the tail end of the last century. For the last twenty years, André and his colleagues have been crafting high-quality content exclusively for Microsoft Flight Simulator 98. 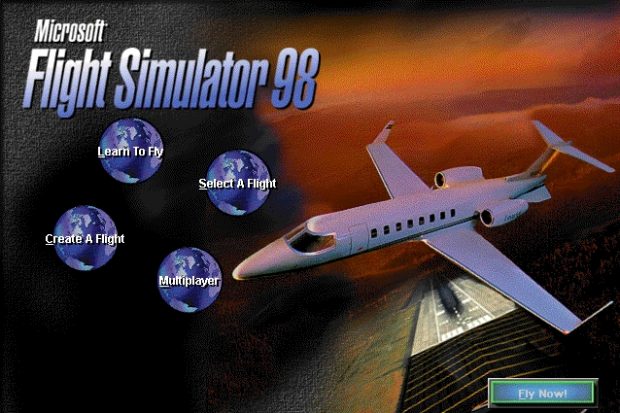 As a boy André's burgeoning interest in aviation was cemented by polystyrene cement and injection-moulded plastic. Circa 1995 the young kit builder was introduced to virtual aviation by a friend whose particular poison was flying Pan Am 727s up and down the US West Coast. Eventually that friend entrusted his eager co-pilot with take-offs, landings and cold starts. The seed was sown.

By the time André got his first PC in 1997, his imaginary logbook showed over 1000 hours of virtual flight time, the vast majority in jetliners. And yet it was warbird recreations that dominated his harddrive in the period before he discovered FS98: “First I flew missions with the A-10  in Cuba, then the RAH-66 Comanche in the Ukraine, in Iraq, in Siberia, in Cuba and finally with my all time favourite JSF (X-32 & X-35) in Afghanistan, Columbia, Korea and Russia.”. 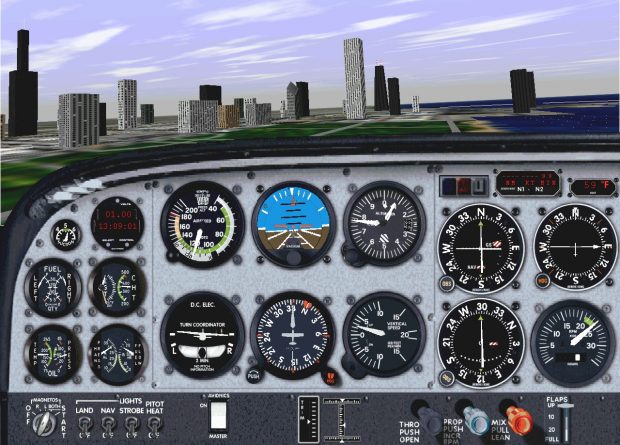 Real wars in Afghanistan and Iraq eventually cooled Andre's ardour for Hellfires and Hydras, Mavericks and Paveways. The wonderful, endlessly expandable FS98 stepped in to fill the faux flight vacuum. A bond that began to form during Cessna trips from Meigs Field became unbreakable during short-haul airliner jaunts in now very familiar Californian skies. By 2001 Andre was circling the globe in jumbo jets. By 2002 he was founding his first virtual airline, and using his training as a draftsman, designer and architect, to build airframes and airports for his favourite sim. 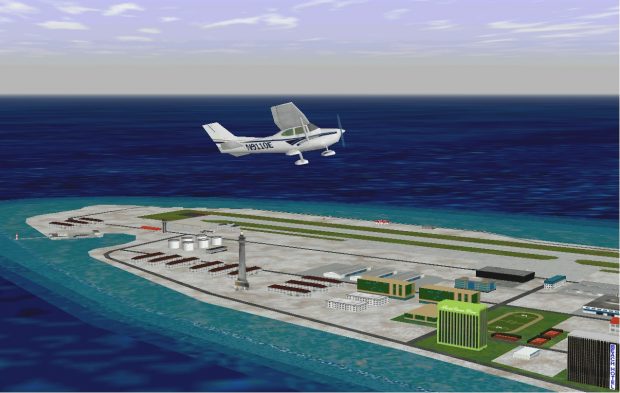 Fast-foward sixteen years, and Lionworks are still working tirelessly to enhance a version of MSFS that Wikipedia describes, rather unflatteringly, as a service release offering “minor improvements” on what went before. Why has André kept the faith?

“Mainly for three reasons: First it's easy to build sceneries, paint aircraft and create panels for FS98 - much easier than for FS2004 or FSX. Second, I have done so many airports (almost one thousand) and more than one hundred aircraft - some of them in fictional liveries or for my own virtual air lines - and I really don't want to lose all of this. And this is exactly what would happen if I switched to another sim. Lastly, I stick with FS98 because of the great friendships I've formed with other users, especially former pilots from South America. These old guys would never change to another, newer sim, so I keep good old FS98 alive for them :-)” 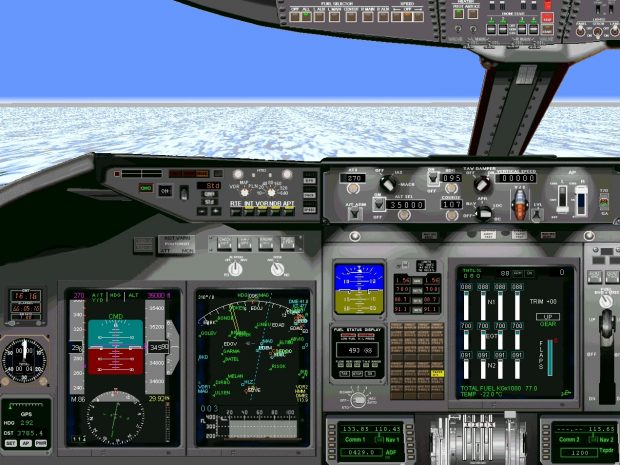 “There are some really great photo-real sceneries for FS98, some fabulous aircraft, almost FS2004-standard for example. But one thing in FS98 is really a mess: the weather! The clouds are ugly white blocks, there's no precipitation, no thunder and lightning. I would love to have these things because I like to fly in difficult weather conditions. If I don't like an airport, I can make a better one. The same applies to aircraft, cockpits, and sounds. But I can't improve the weather.” 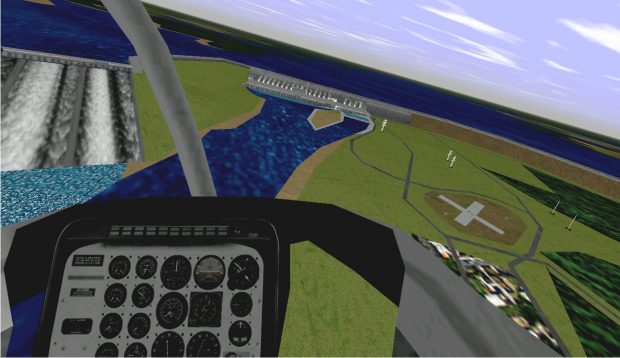 FS98's most industrious environment enhancer cites an Olympics-linked Beijing project, and add-ons that overhaul Shanghai, Baikonur, and the Iguazu Falls area as his most ambitious and satisfying creations thus far. He's also rather proud of his two excursions into bespoke payware. 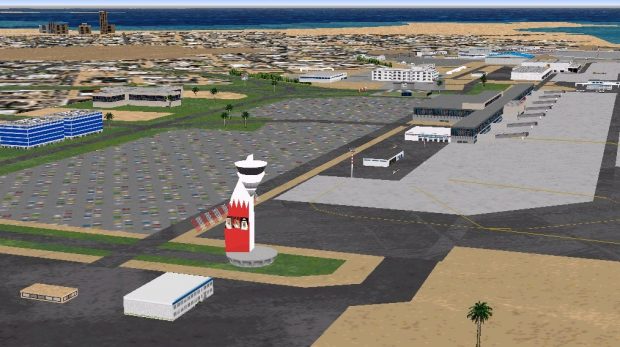 In 2003 the government of Bahrain paid him to pep up their portion of the Persian Gulf  and a year later he used skills honed as an add-on artisan to help a Dresden firm plan and execute an extension to the real Gyandzha airport (UBBG) in Azerbaijan. 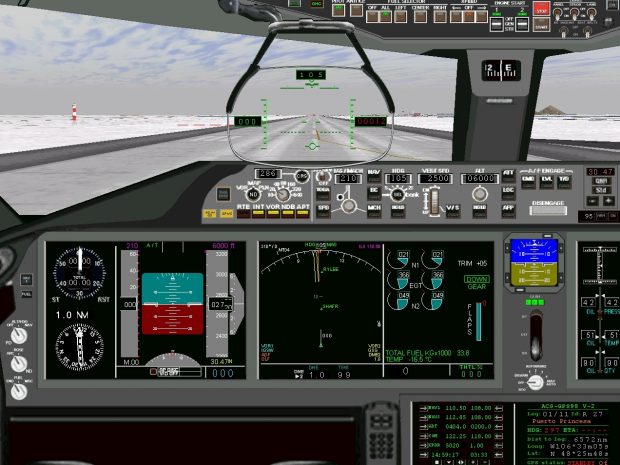 Today, André spends most of his time flying self-wrought Airbus, Boeing, and MDD airliners draped in the colours of his own virtual airline (“I love flying airliners. I can't tell you exactly why. Maybe because it's like virtual travelling for me.”). Original flight crew operation manuals provide the basis for the flight models for these workhorses, and long experience and exhaustive testing ensure by-the-numbers performance under all conceivable conditions. Apparently there's no shortcut to fashioning great FMs in FS98. 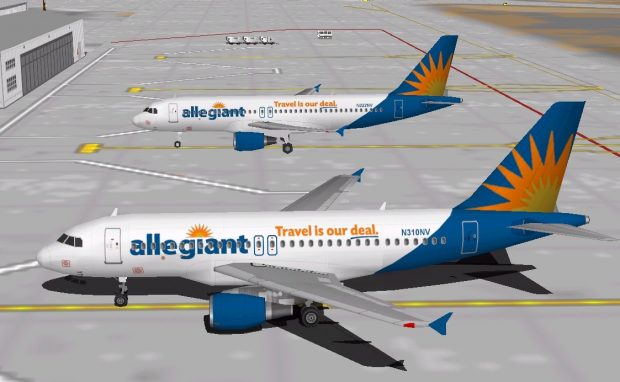 Is it worth asking this legend of the MSFS freeware scene to craft a FS98 version of that obscure 1930s airliners you've always had a soft spot for, or that bush strip at the end of your valley?

“I do take user requests - especially if they're from good friends of mine (like some pilot friends in South America) - but it has to be an airport or aircraft which I have a personal interest in. If it is just an aircraft repaint which will take me two hours - no problem. But if it's a huge airport scenery which will take two months to do, it really has to be something I will use personally”.