Terrorists = grief. Headsmen = heads. Politicians = distrust of politicians. Long-distance lorry drivers = plastic bottles full of piss. Every occupation has its byproduct. I'm not overly proud of the tens of thousands of screenshots I generate each year. Yes, some of them are put to good use illustrating articles about tank restoration and U-boat games (see on) but the vast majority end up littering parallel universes (one day a courageous computer scientist will come clean and explain how 'delete' actually works). For every pic displayed below, seventy will, I'm ashamed to say, be slyly fly-tipped in worlds where sparrows are venerated and ladder-walking is an Olympic sport. 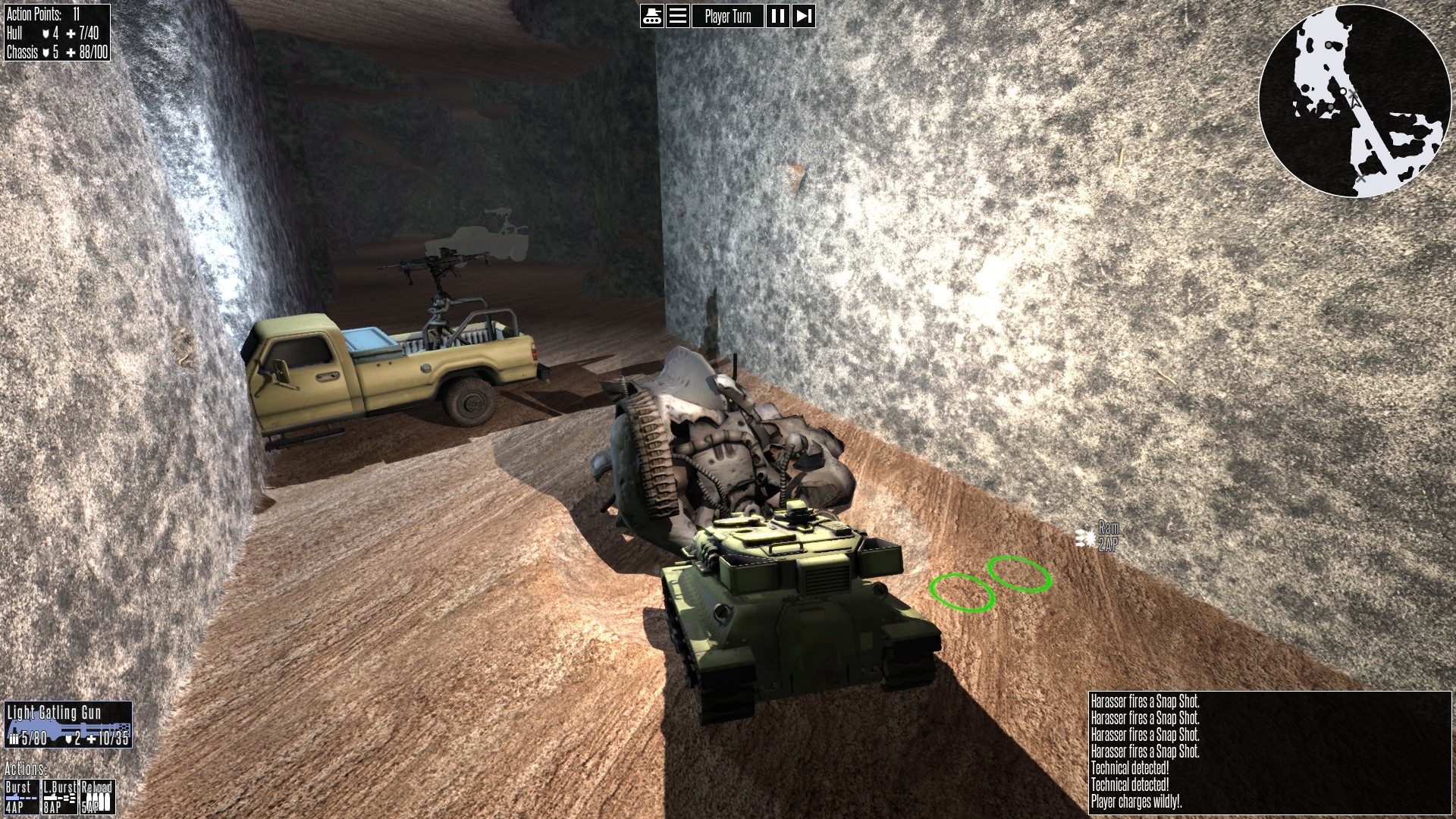 ^ This is me not enjoying Dead Hand as much as I hoped I would. One Man Army Games' “turn-based tactical roguelike set in a fully destructible procedural environment” should have been right up my catacomb, but when push came to shove we didn't hit it off. A combination of bland environments, untidy collision detection, and repetitive combat against too-densely sprinkled adversaries meant I'd grown restless inside an hour. The most complimentary thing I can say about Dead Hand is that it sows seeds like a Pottinger Aerosem 4002. It's impossible to play it without picturing an ace WW2 armour game built around similar Jagged Alliance-style mechanics. 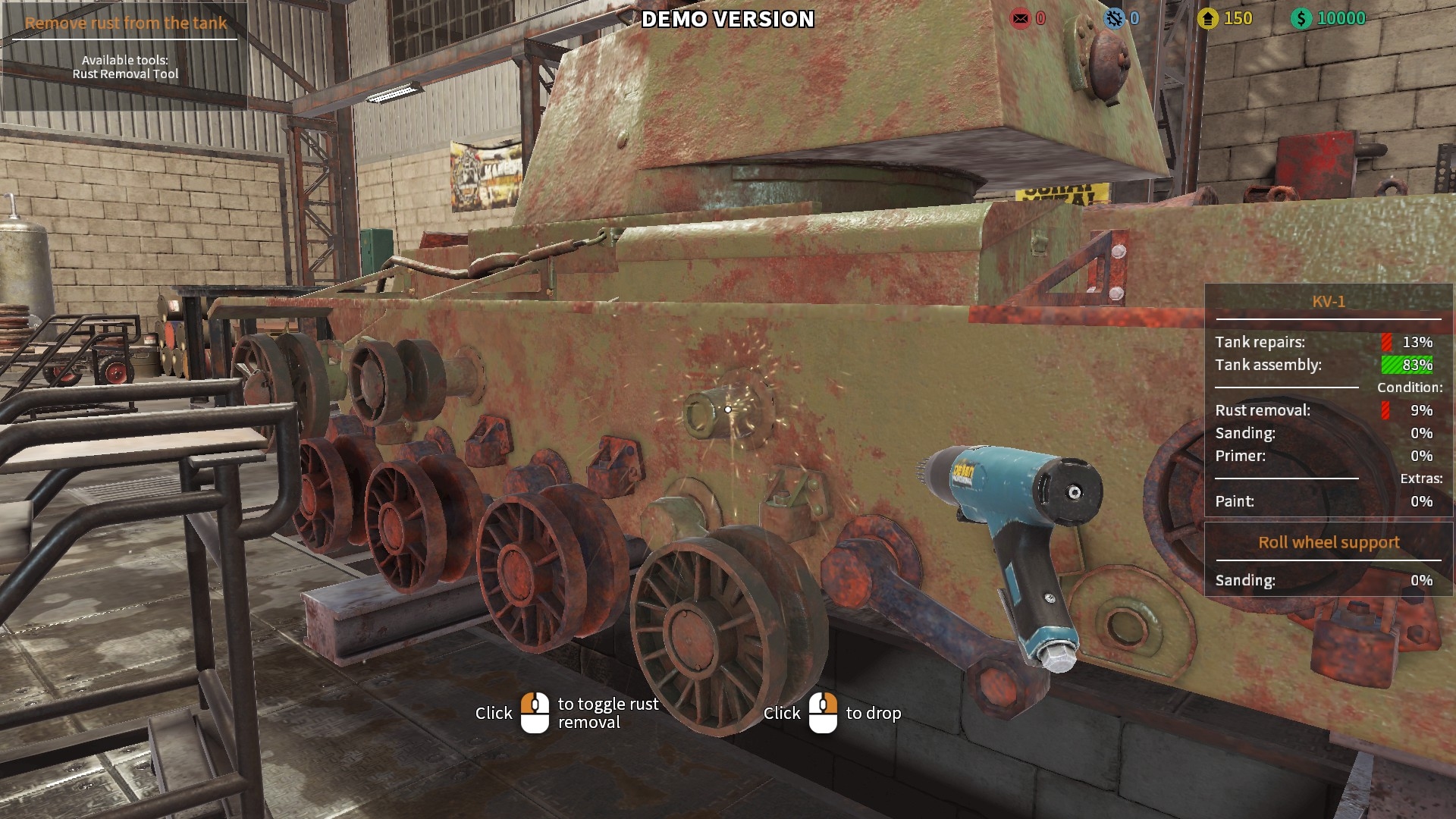 ^ Talking of WW2 armour, this is me happily scouring the iron oxide off a KV-1 in the soon-to-be-publicly-available Tank Mechanic Simulator demo. Maturing too slowly for some, DeGenerals' novel work-in-progress has an eye-catching price tag ($16) and feature list (14 WW2 AFVs promised for the release version) but, more than two years after breaking cover, it's still at least five months away from completion. 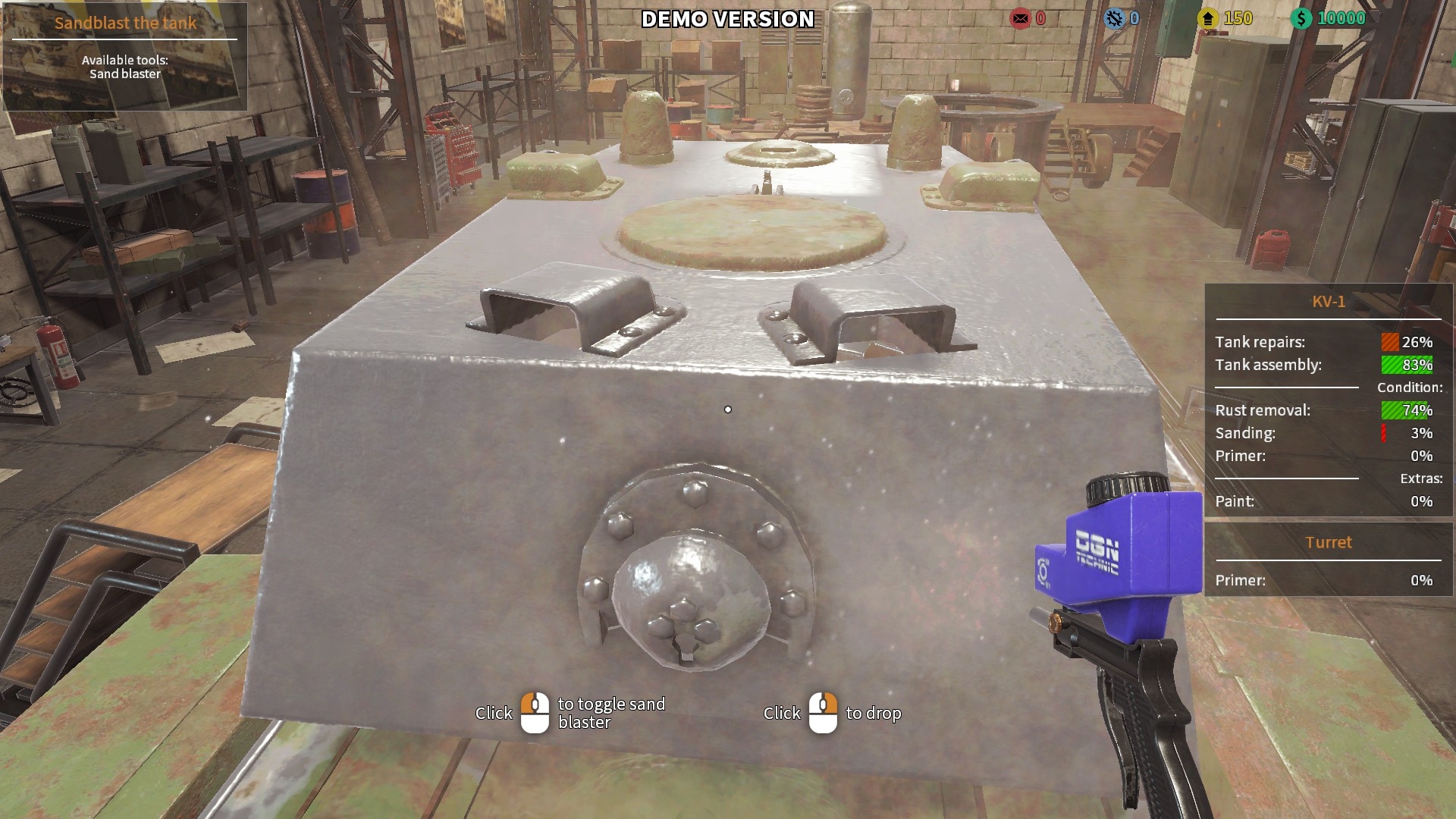 ^ The demo, a hefty thing equipped with three tanks (KV-1, Sherman, and Tiger), will persuade you to undertake days of boilersuit-besmirching toil if you let it. Once the rust removal was done, the pictured Soviet mole trembler required sandblasting and painting (primer and top coat) inside and out. By the time I'd purchased and fitted missing parts, and topped up various fluids in the engine bay, I'd probably lavished a good two hours on her. 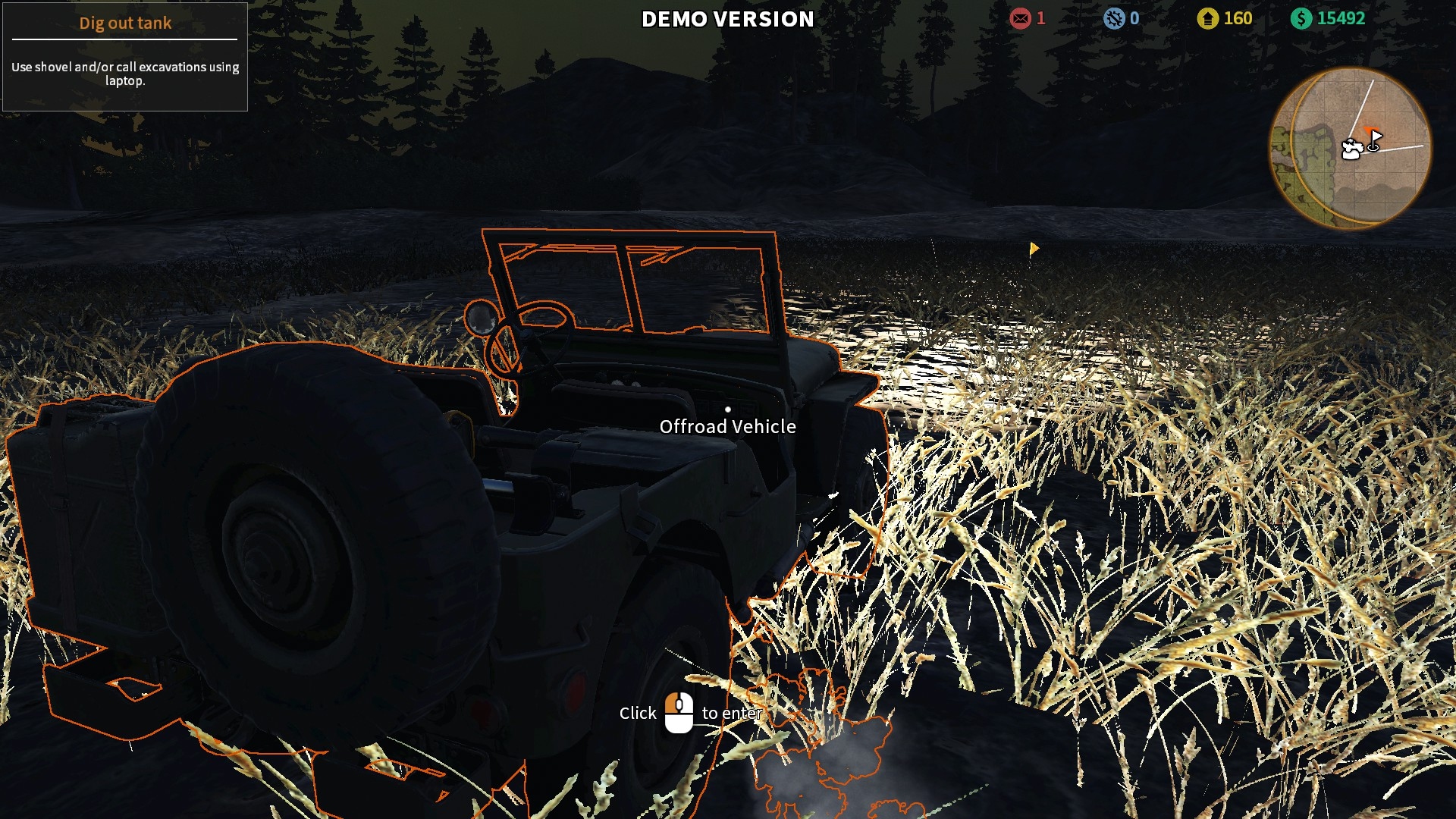 ^ With the KV-1 sufficiently spruced-up to satisfy the clients (as you prep, paint, and fit components, a collection of progress bars edge towards “acceptable” green zones) I took on my first find-and-extract contract. Thanks to an unpredictable day/night cycle and an unimaginative approach to relic locating, the field trip was both harder and easier than anticipated. What kind of idiot goes hunting for buried WW2 behemoths at dusk? Me, apparently. In truth, the darkness was of little consequence. An intelligence-insulting map circle meant I only had to metal detect an area about the size of a tennis court in order to find my prize. How much more interesting it would have been if I'd arrived on site clutching a sheaf of hand-drawn maps, contradictory statements from elderly locals, and faded photos showing the abandoned trundler before mud and vegetation completely hid it from view. 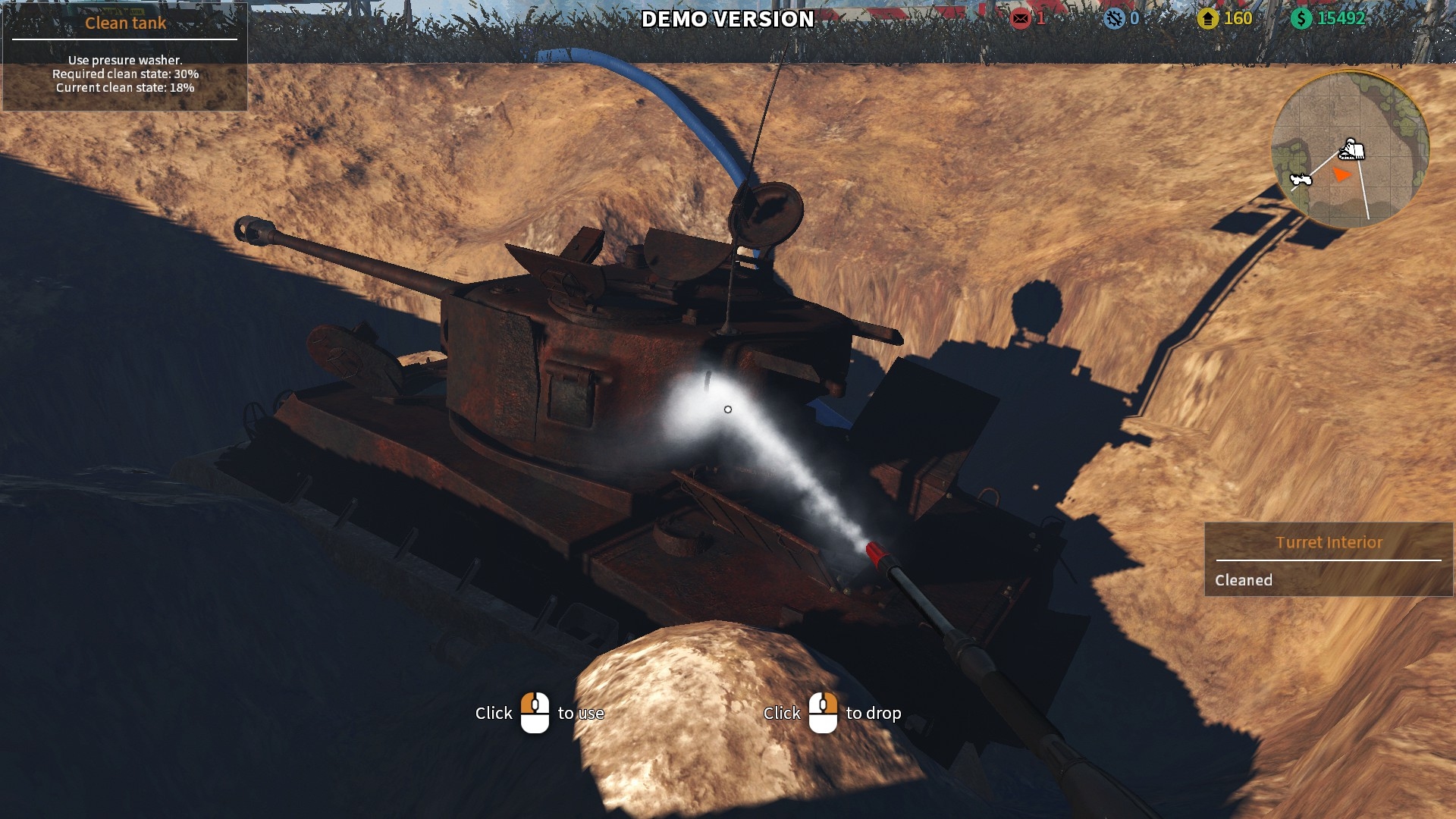 ^ The game's extractions have to go down as mildly disappointing too. After the undeniable thrill of exposing, with methodical spadework, familiar turret and superstructure details, distance-creating automation kicks in with a vengeance. Post-discovery, your participation is limited to starting a pump to drain the crater, removing surface muck with a pressure washer, and then depressing the button that magically teleports the relic to a waiting low-loader. What a pity there's no corduroy road construction, no quivering winch cables, murmuring onlookers, or torrents of muddy water pouring from gaping hatches. 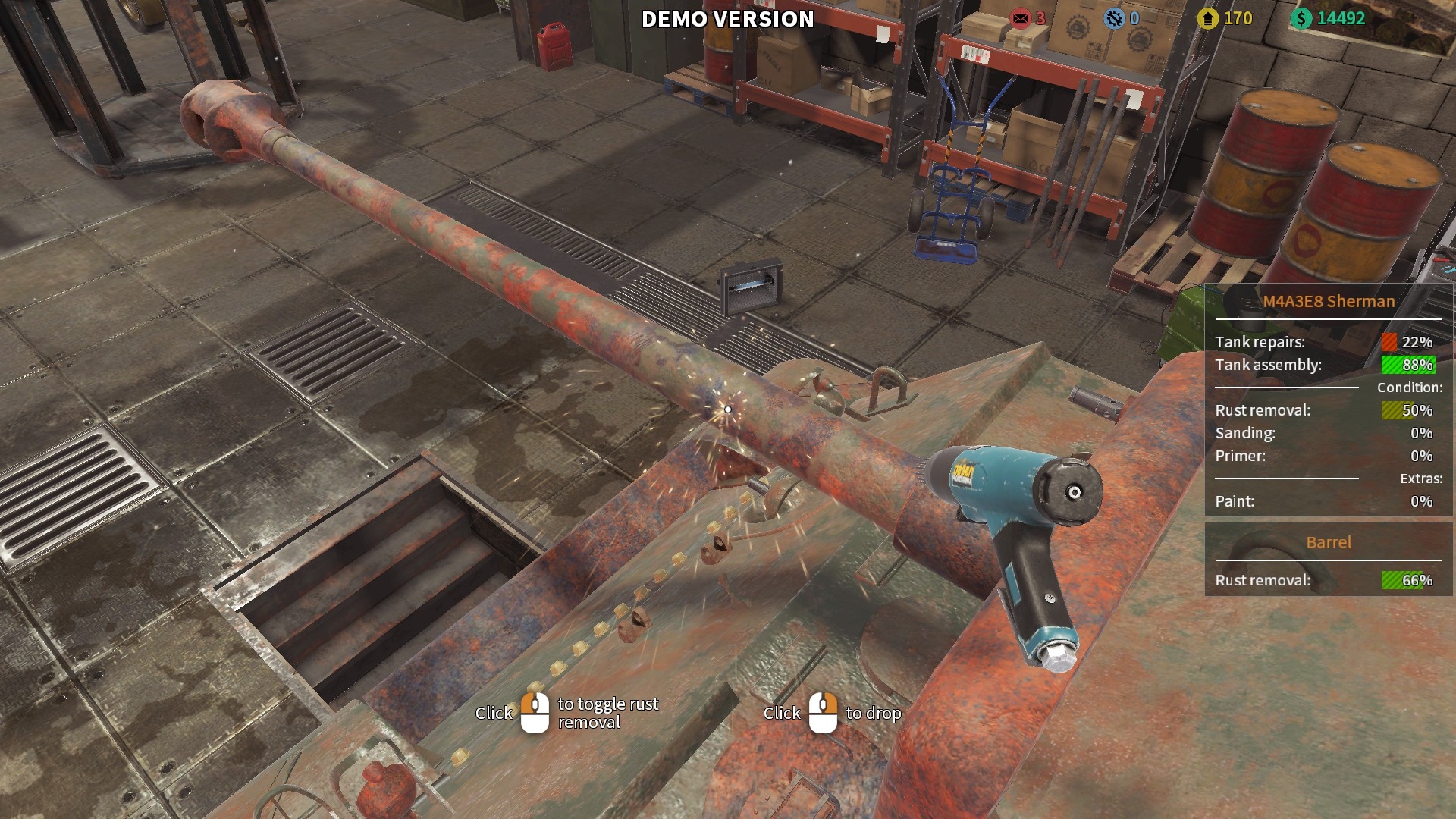 ^ If there's a perfectionist lurking inside you, the sometimes-literal workshop grind is sure to coax him or her out. While working on this recovered 'Easy Eight' Sherman, I found myself striving for 100% ratings in refurbishment areas when lesser scores would have sufficed. Gosh, I've failed to sandblast that easy-to-miss suspension pin properly. Once I've finished with the paintgun, I'll attend to it... Hmm, I don't need to repaint that turret control wheel to progress, but as I've gone to the trouble of tarting up everything else in here, it would be a shame to leave it undaubed... There's less detective work in TMS than there is sub-genre siblings like Car Mechanic Simulator and Plane Mechanic Simulator, but the game generates similar feelings of job satisfaction, and offers compensatory attractions in the shape of a museum and a 'proving ground'. 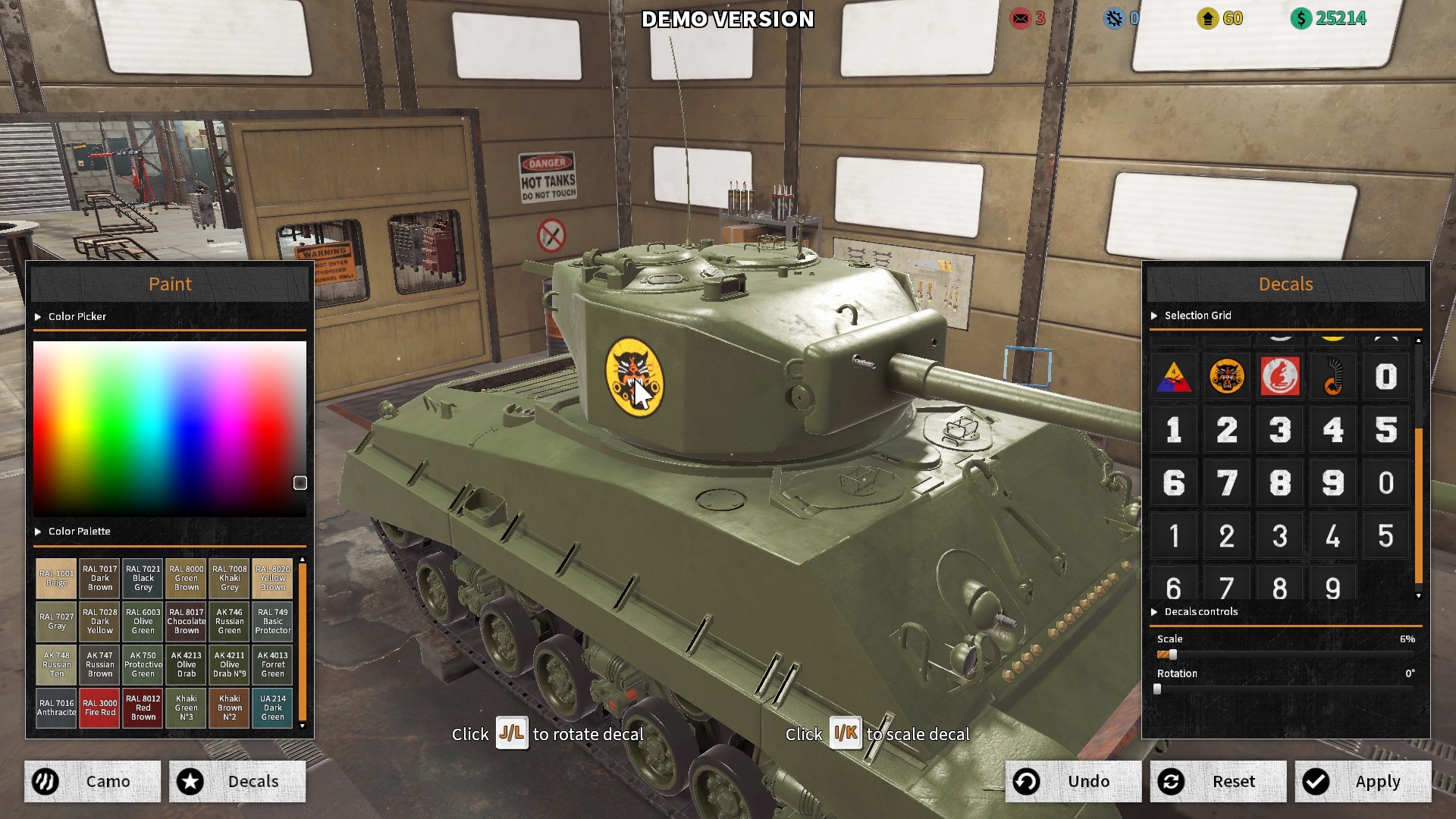 ^ Because the proving ground is securely padlocked in the demo, I've spent the Reputation points I've earned thus far (eight hours' worth) on alternative upgrades like the paintshop and museum. Counter-intuitively, while the game lets you wield the sandblaster, and spray your AFVs with primer and bog-standard paint schemes, in the main workshop, to apply decals and fancy camo patterns you need to purchase a connected area via a Rep transaction. 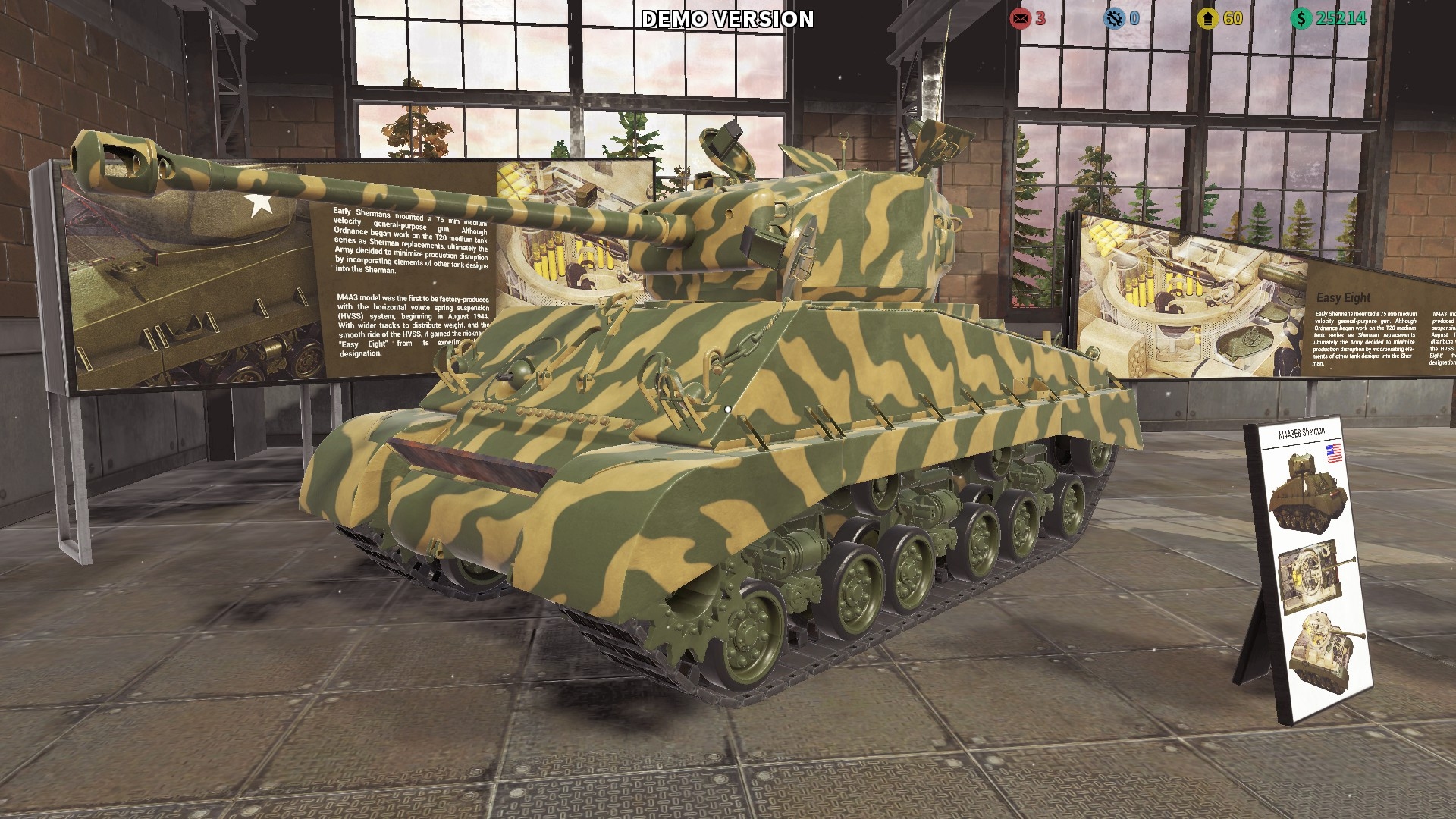 ^ Moving a project into the museum for the first time (restored tanks can also be sold) is a genuinely proud moment. Tanks can be placed in any of the exhibition space's eight vehicle slots, and slots may be customised with a range of different info panels and posters. Around the big exhibits empty display cabinets wait patiently, presumably for smaller WW2 artefacts unearthed with the help of the metal detector and wheeled magnetometer. Assuming the resting places of these minor treasures aren't telegraphed too obviously, locating and unearthing them should prove enjoyable. I'm sure I'm not the only potential TMS player who has watched YouTube videos of metal detectorists prising corroded military history from damp pine-needle carpeted East European loam and thought “I'd love to do that”. 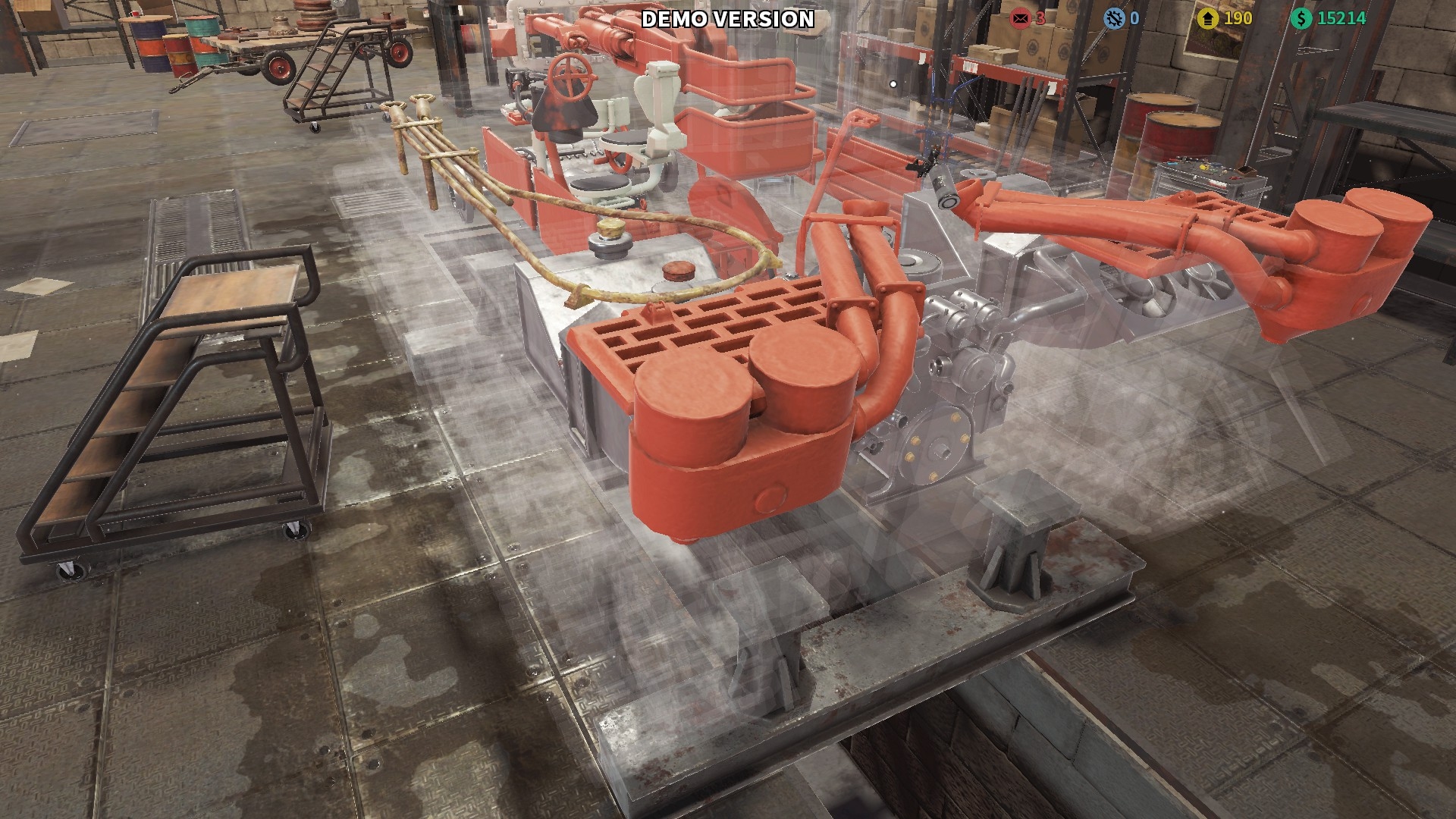 ^ An excuse to spend time in close company with a hamlet of iconic angry houses... an affordable WW2 game that doesn't require blitzkrieg reflexes or musteline cunning... a sop for a generation deprived, by the global economy, of the satisfaction that comes from working with your hands... an opportunity to wallop things with a virtual sledgehammer... Tank Mechanic Simulator almost has enough going for it for me to ignore the Tortoise in the room – the scandalous lack of British armour in the default line-up! Surely, with fourteen AFVs planned, one of them could have been a Bren Gun Carrier, Churchill or Queen of the Desert? 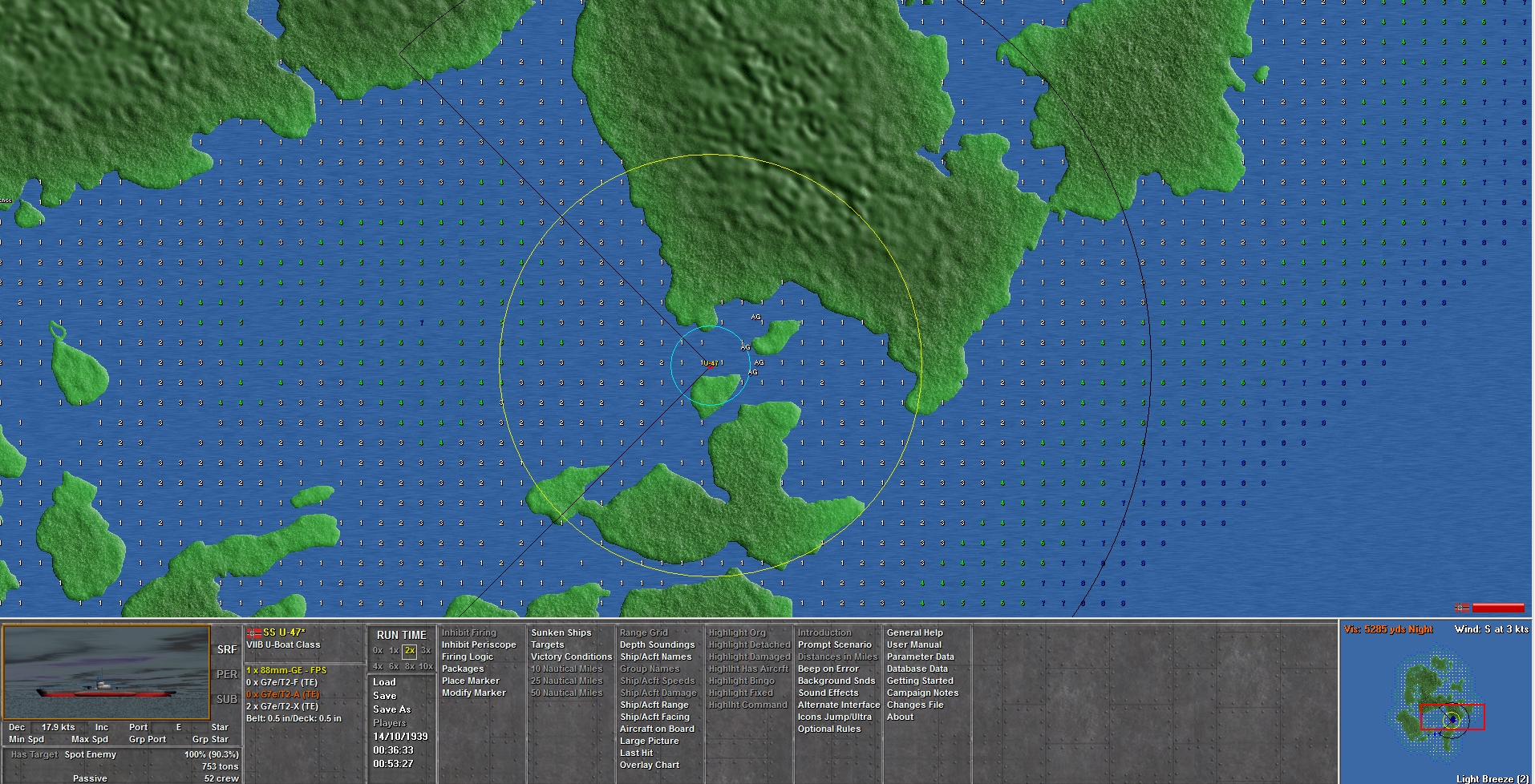 ^ Here I am attempting to emulate the man who felled the Royal Oak in new turnless John Tiller Software wargame, Wolfpack. The fifth Naval Campaigns game has the good looks of a flounder, coelacanth-primitive campaigns, and a GUI that feels like a hurried first draft, but undemanding basics, and a talent for recreating the sort of mid-Atlantic mob violence that few sub games sim well, is bound to win it friends in certain quarters. 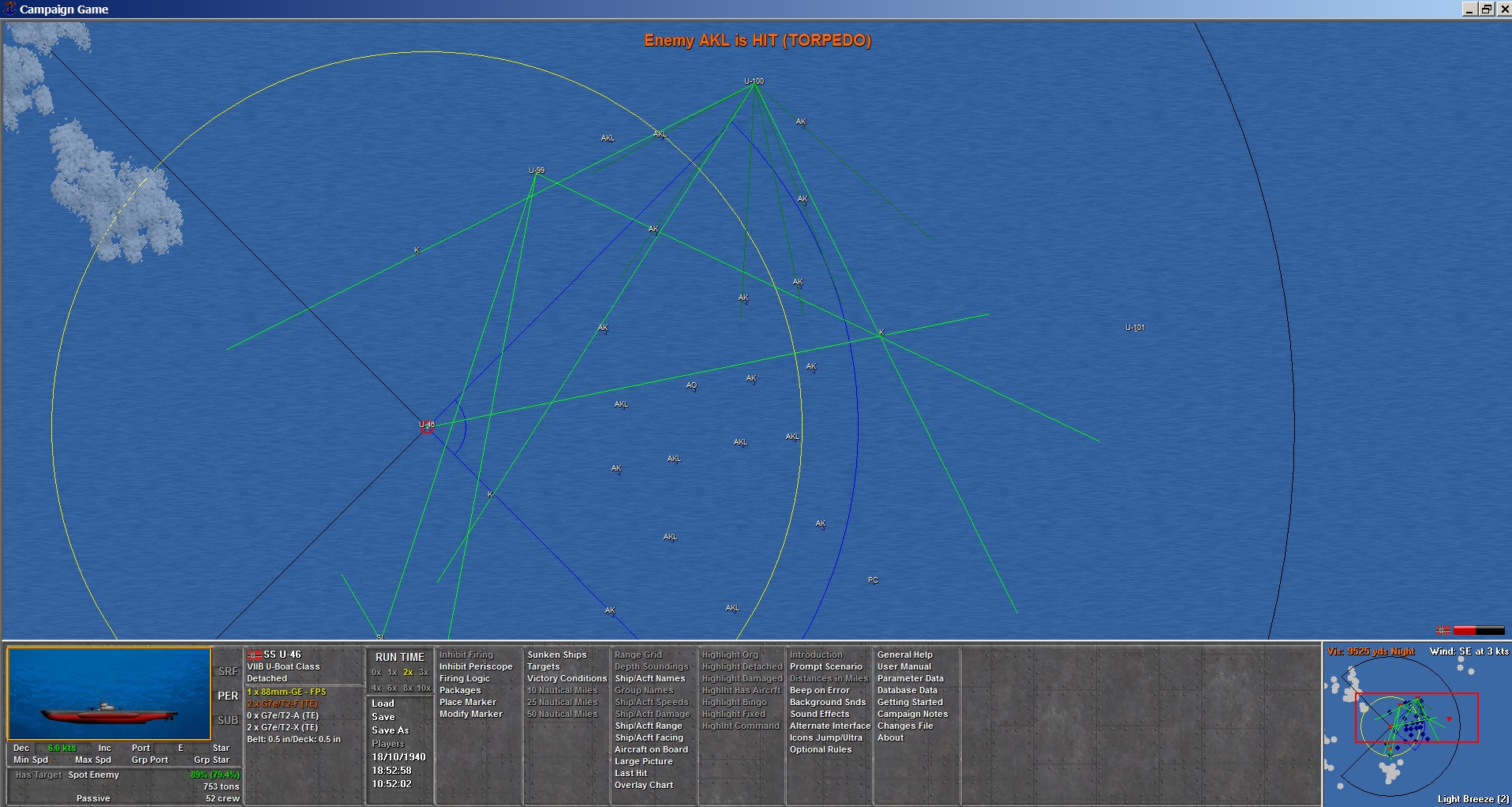 ^ The game is at its best when it crowds the screens with rust-streaked wolves, sheep, and shepherds. Perhaps half of the 45 scenarios carefully recreate documented attacks on convoys by gangs of U-boats. In the midst of such engagements with torpedoes streaking towards zigzagging convoys (the AI handles large flotillas and their chaperones deftly) from all points of the compass, and escort vessels making for fast-disappearing traces of periscope wake at flank speed, Wolfpack comes alive.

^ Playing as a U-boat choreographer, your choice of commands is fairly limited. You can change the speed of a sub and its heading (16 possible directions), order a vessel to surface, run at periscope depth, or dive deep (actual depth isn't displayed). Individuals systems like the periscope, deck gun , sonar and radar, can be 'inhibited' to reduce the chance of detection. And, of course, the player decides when eels leave their nooks and which direction they swim in. Pressing Ctrl with the cursor over a prospective torp target causes a blue line to sprout from the selected sub. Right-click anywhere along this helpful 'TDC solution' and the launched eel should intercept successfully, assuming the target doesn't alter heading beforehand. Freehand guesstimate targeting is also possible. 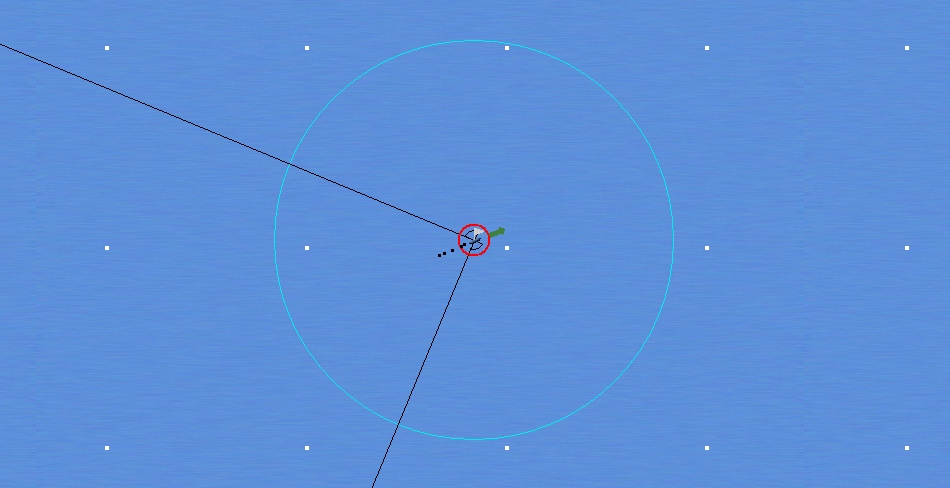 ^ Playing as the Allies is a little fiddlier. Individual clicks in the small fan-shaped weapon sectors that surround hulls, cause individual depth charges to be rolled off stern racks or projected sideways by K-guns, and hedgehogs to unleash salvos forward. You have no control of how hydrostatic pistols are set so tactics basically boil down to hurrying in the direction of sonar contacts (indicated by a green line) then dumping HE on likely spots and crossing your fingers. 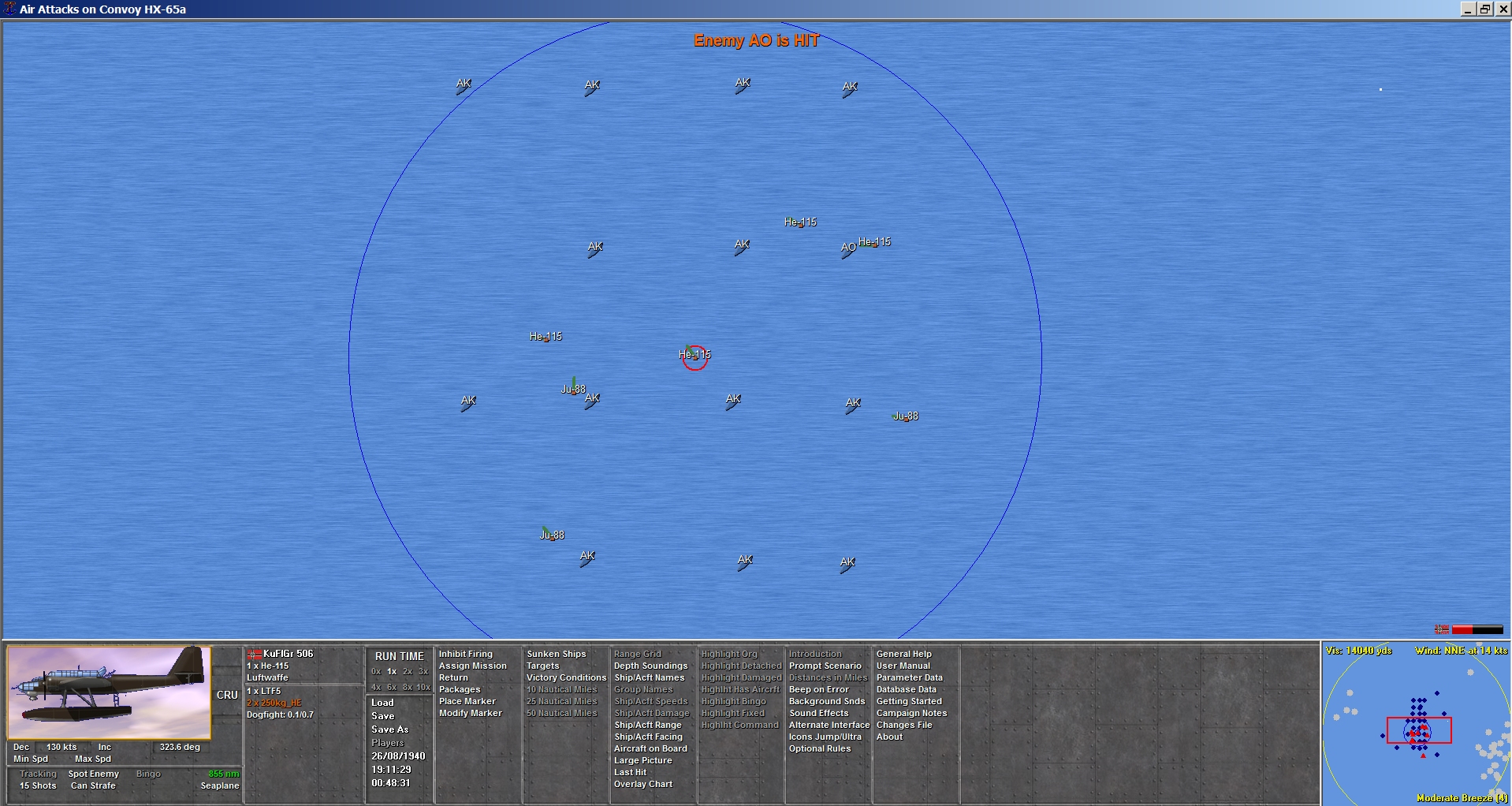 ^ Aircraft participate in some scenarios, their powers of detection influenced by individual, moving clouds on cloudy days. Unsurprisingly given its lineage, Wolfpack teems with realistic subtleties like this. Ships may lay smoke screens. They can finish up crippled, slowly flooding, or, on rare occasions, Bismarcked after rudder hits. Thermoclines, snorkels, battery life, sonar blind zones, dud torpedoes... all are simmed in some fashion, the devs working hard to model all the factors that made the cat-and-mouse in the North Atlantic so fascinating. 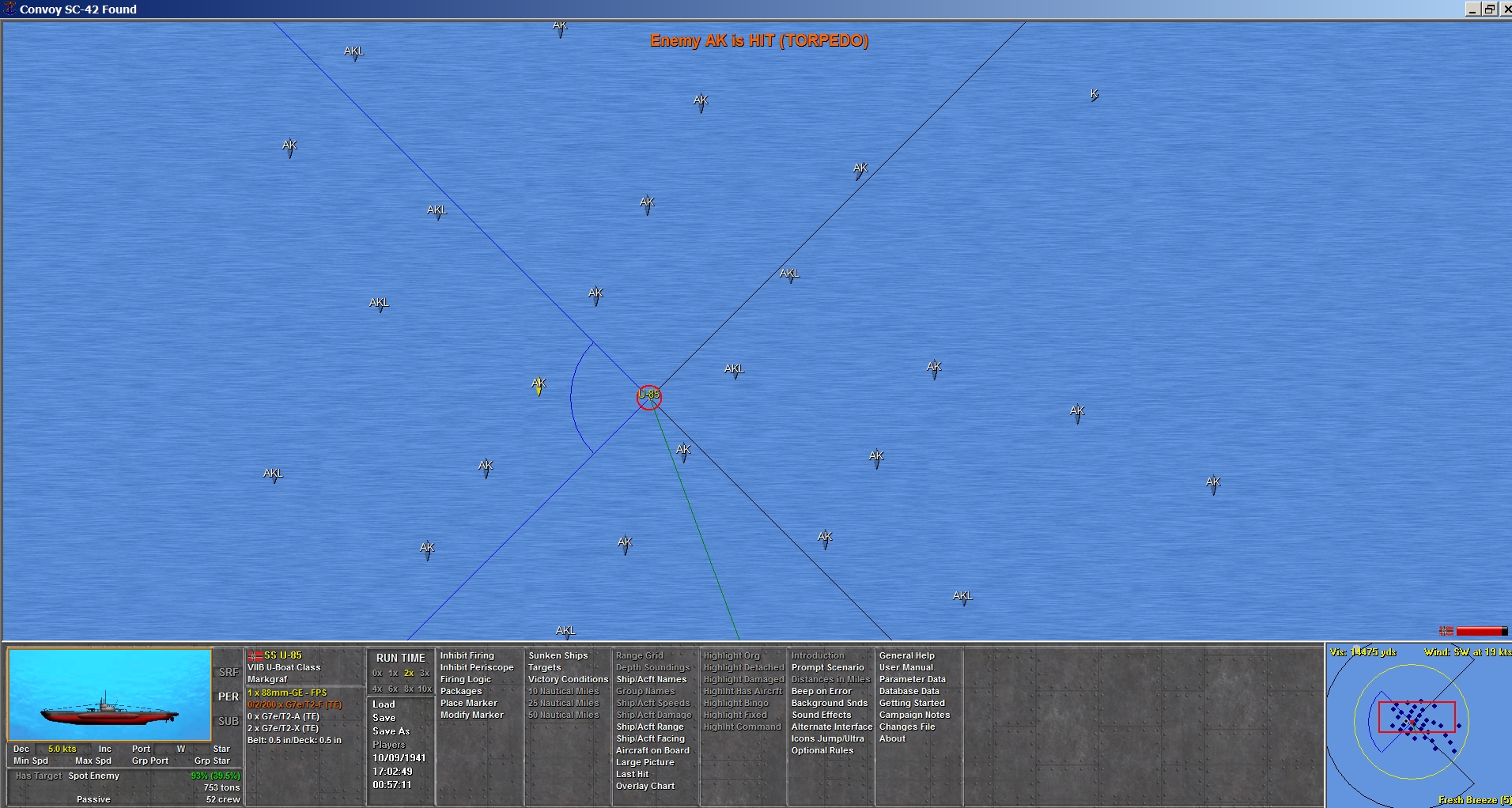 ^ What you don't get is much in the way of visual drama. Sounds effects are employed well, but the closest thing to an on-screen pyrotechnic is a ship silhouette flashing yellow after a torp detonation.

^ Relying on missions plucked from the single scenario folder, and devoid of crew management, freelancing choices, and hunger-sharpening periods of freighter famine (all engagements start with hunter and hunted in relatively close proximity) the campaigns inevitably feel a tad primitive. The one based on the career of Gunther Prien starts with a series of frankly dull surface engagements with solitary unarmed freighters. Even the famed Scapa Flow escapade ends up feeling a bit routine. The Battle of the Atlantic sequences show more promise. Assuming you opt to start in 1940, you get to play an engagement from each year of the conflict and, prior to each scrap, always seem to be given the chance to attack en-masse. Plump for the wolfpack option and not only do you get a far more interesting tussle you get a far longer one – twelve whole hours instead of one in which to maul, disengage, and maul some more. 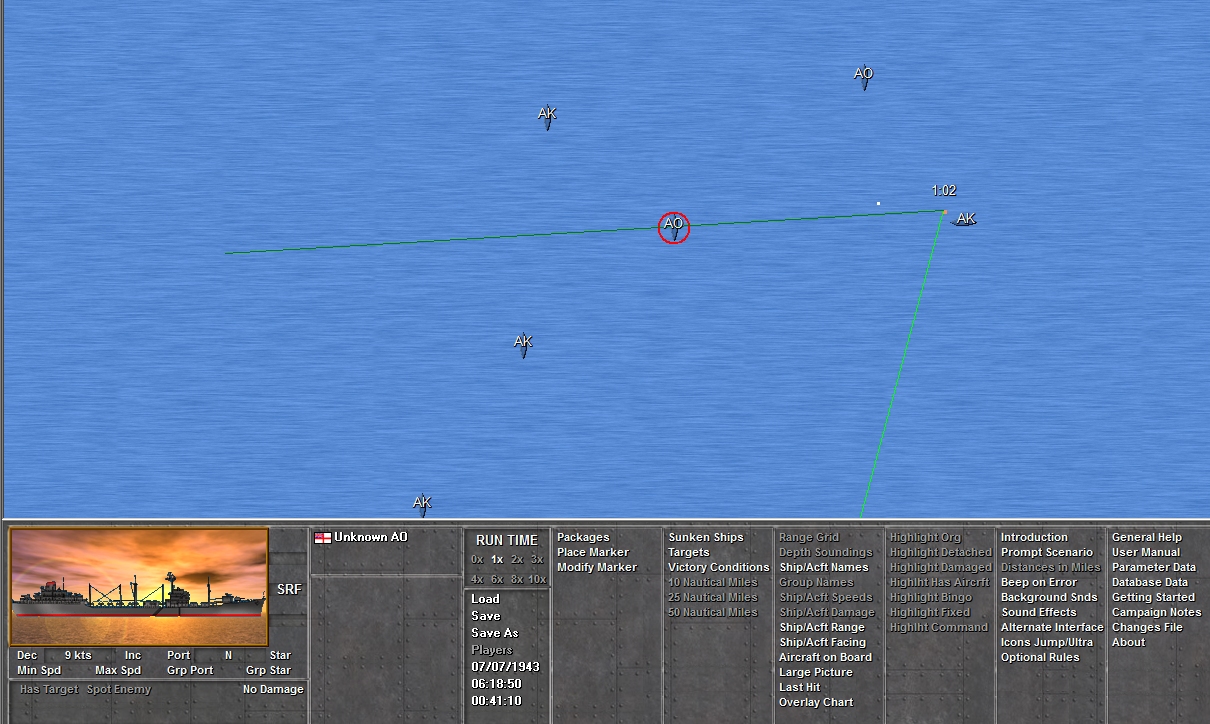 ^ While UBOAT has little to fear from the unprepossessing, old-fashioned $40 Wolfpack, good luck finding another sub game that can recreate U-boat feeding frenzies better than this dowdy newcomer. 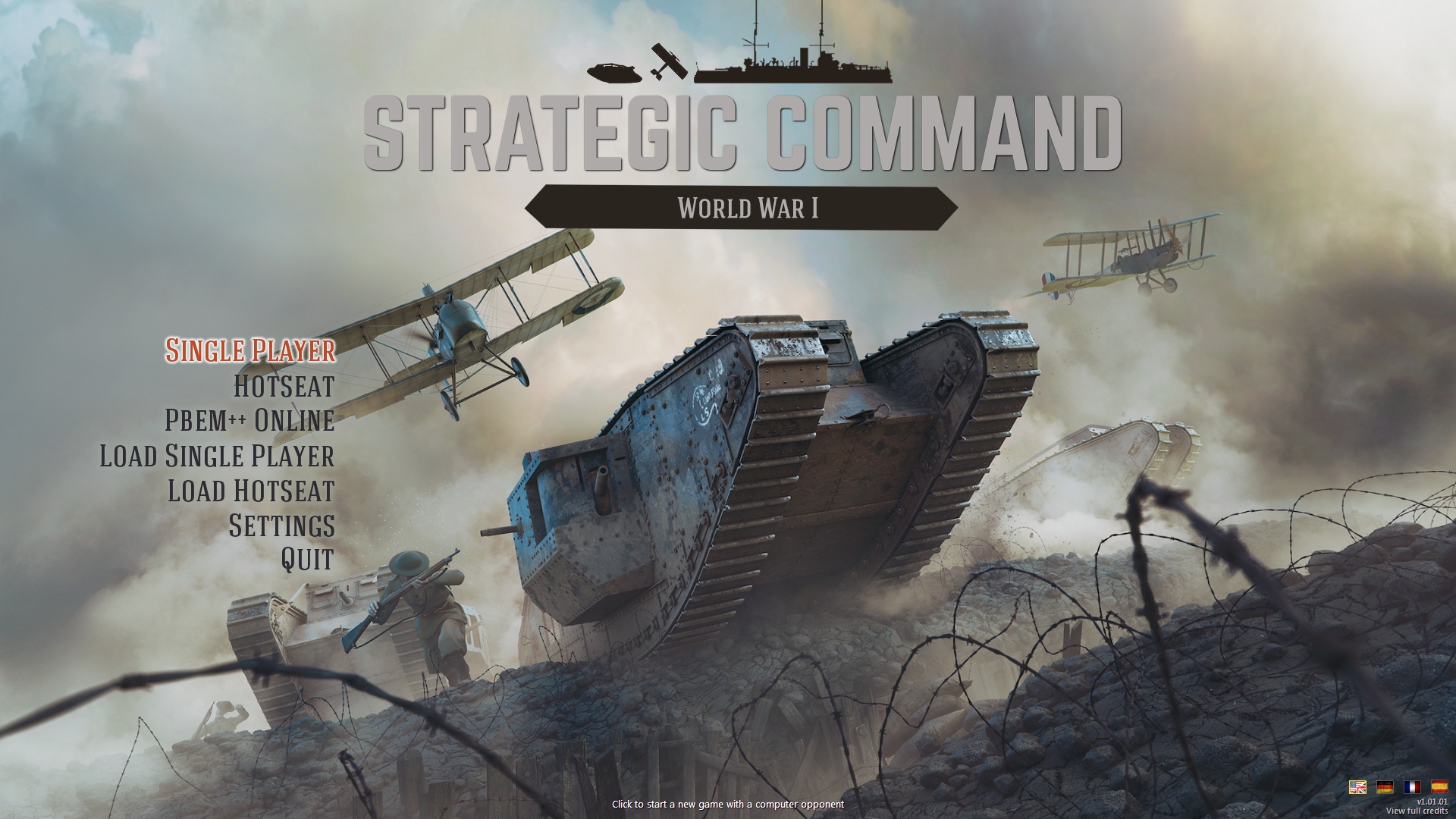 ^ This is me, a few moments ago, wondering where the released-yesterday Strategic Command: World War I hides its tutorials.