If ever a game demanded a 'II' rather than a '2' at the end of its name it's the fast-approaching Field of Glory sequel. Packed with legionaries, triarii, hastati, and velites, FoGII takes the engine last seen in Sengoku Jidai and Pike and Shot - an engine Flare Path rates highly - rethinks campaigns, removes gunpowder, and adds a sprinkling of chariots, jumbos, camels and ballistae. What could possibly go wrong? 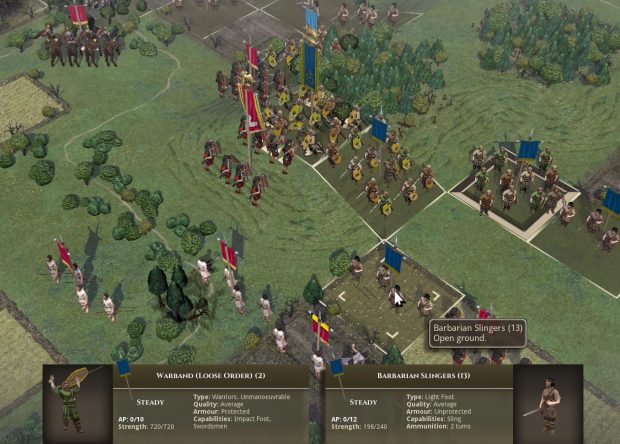 In theory, lots, so it's nice to be able to report that I've been playing the beta contentedly all week. The repurposed code means battles have a familiar 'Bodley Scott' feel - more on automatic pursuits and 'cowardice cascades' in a moment - but a wealth of new factions and unit types ensures FoGII never feels tired. 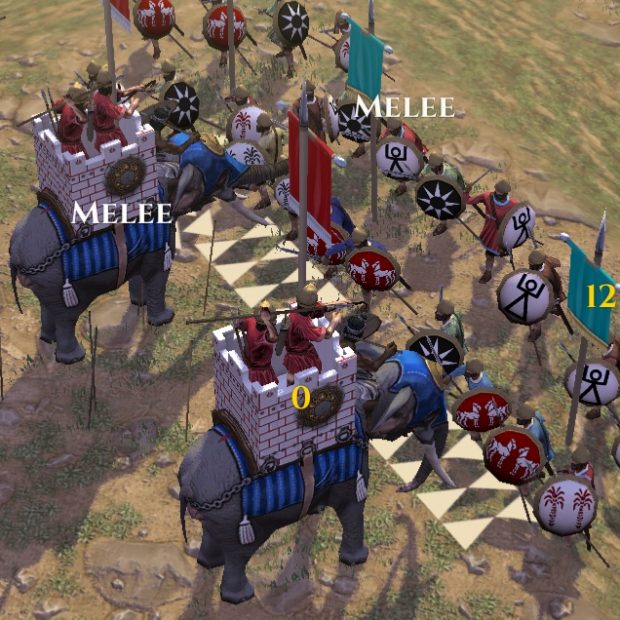 I don't use the term 'wealth' lightly. The list of included armies...

…is truly magnificent. The combinations possible in custom battles... 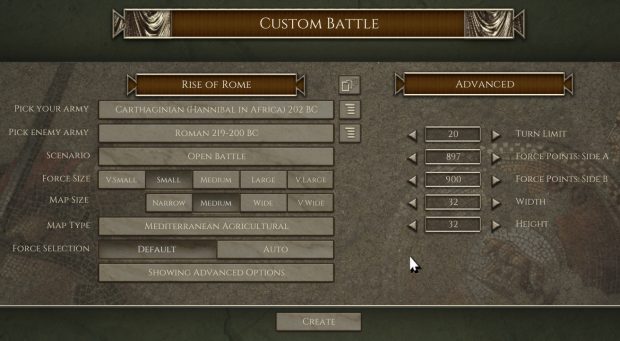 ...multiplayer, and 'sandbox campaigns' (sequences of up to seven randomly generated scraps involving two hand-picked factions) dizzy the mind. FoGII would be a game of substance even without its four scripted campaigns, twelve-strong historical battle selection, random maps and unit purchasing freedom. 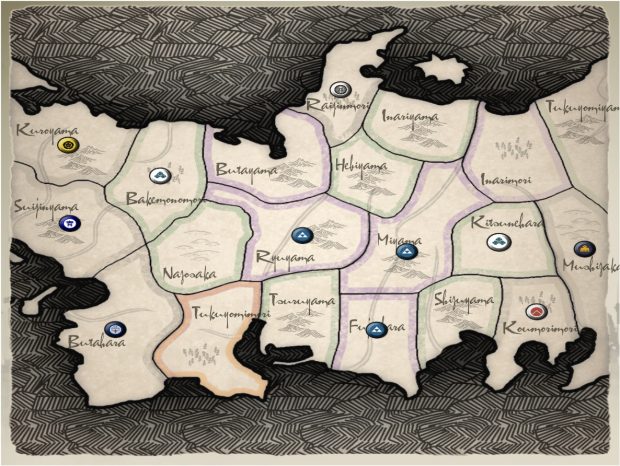 Pike and Shot: Campaigns and Sengoku Jidai (pictured above) featured strat maps composed of conquerable provinces. The sword-and-sandal version comes without this form of long game which may disappoint some. Instead we get those linear 'sandbox campaigns' and four historical battle sequences inspired by the careers of Pyrrhus of Epirus, Mithridates VI of Pontus, Hannibal and Julius Caesar. 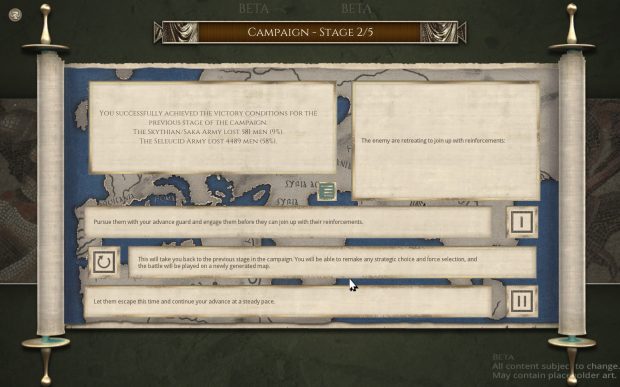 The latter blend scripted scenarios with thought-provoking inter-battle decisions. After successful scraps you find yourself contemplating choices like these:

You feel you need additional forces in order to progress the campaign:
1.   Call in a force from your Bruttian allies.
2.   Await reinforcements from home. These are not likely to be as numerous.

Your territory has been attacked from an unexpected direction by another enemy army:
1.   Fight them with your rear echelon forces. (A new army chosen by the AI from your nation’s army list, weighted towards lower quality troops).
2.   March to meet them with your field army. You will not have time to replace your losses from the last battle.

Though the new approach injects history at regular intervals, because defeats are terminal (true, there's always the option to repeat a battle) it's not as forgiving or flexible as the old Total War-style one. Perhaps Byzantine Games can be persuaded to patch in or DLC a patchwork map or two. A freeform Boudica-era British campaign would make at least one FoGII fan very happy indeed. 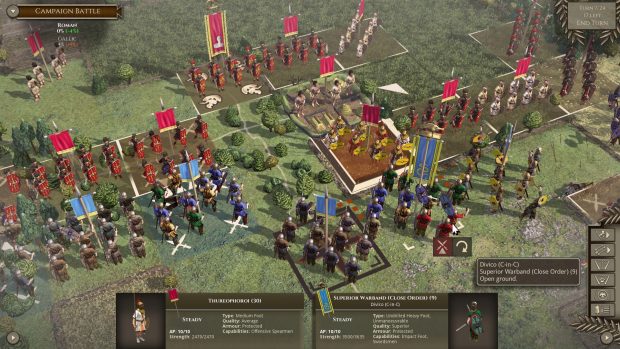 Never played one of the Pike & Shot family of titles? They appear conservative - dull even - with their IGOUGO turns and quaint square tiles, but ingenious rules, competitive AI, and randomly generated venues, mean they're actually anything but. Bodley Scott simulates battlefield chaos masterfully. While cruel 'activation' dice rolls never leave portions of an army idle for the duration of a turn, units locked in melee or excitedly chasing routed foes, are temporarily uncommandable. 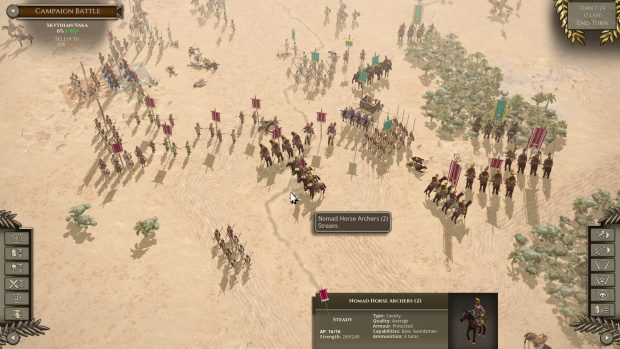 Morale failures and the linked auto-pursuit mechanism create some of Pike & Shot, Sengoku Jidai, and FoGII's most exciting and resonant episodes. When a unit decides it has endured enough and takes to its heels, its flight can disconcert nearby comrades; fierce, hot-headed pursuers sometimes create cowardice cascades or run into trouble as they surge forward. One minute you're looking at a neat log-jam of clashing warriors, the next a weak or overstressed section of the tussle matrix has given way, and new threats and/or opportunities are everywhere.

Like its forerunners, FoGII produces gripping battle after gripping battle. Even the three tutorial skirmishes are absorbing. The beta leaves me questioning Byzantine's campaign thinking, but confident the PC is about to get something it's been without for a very long time – an ancient wargame with popular appeal and historical heft.

It's probably a good thing I don't live in Eastern Europe. A few years ago I stumbled, almost literally, upon a rusting Bren Gun Carrier track link while walking on a local hillside and the resulting excitement took days to dissipate. If I ever discovered a moss-encrusted MG 42 or, heaven forbid, a bog-embalmed Panzer IV I suspect I'd spontaneously combust from delight.

Those amazing YouTube vids in which mud-encrusted militaria hunters in birchy swamps disinter discarded WW2 hardware are, almost certainly, the main inspiration for upcoming oddity Tank Mechanic Simulator. Under development in Poland (where else) this intriguing prospect appears to combine the spanner twirling of Car Mechanic Simulator with the mudplugging of Spintires and the visitor-wooing of Theme Museum.*

As tank museum owners determined to “Find, Recover, and Renovate” abandoned armour, we'll be expected to research potential hunting grounds then mount expeditions. Once in the field, information gathered from locals will reduce the size of an earthen haystack that can be probed for fab Forties needles with the help of metal detectors and diggers. 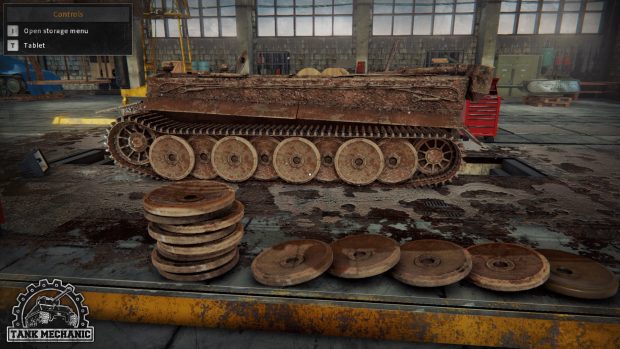 When finds arrive home the sandblasting and the WD-1940 spraying can commence. It sounds like the more effort we expend on restoration, the more attractive and lucrative our attractions will be at the end of the process. For instance, angry houses with functioning engines can be used as both static exhibits and crowd thrillers at Tankfest-style open days.

Assuming the detective work at the beginning of AFV hunts is engaging, and tank excavations/extractions involve some recognisable physics and real problem solving, Degenerals' debut project should be warmly received in these parts next summer. I'm hoping it encourages a few more devs to bury history. The world* needs more** archaeology games!