Is now the moment to commit my reserve? Should I send my infantry down the road or through the forest? Do I have sufficient resources to take both villages or should I settle for just one? Many of the questions Radio General asks are as old as the Apennines. You will have encountered them countless times before. It's novel noggin warmers like “Where on earth is Easy Company?”, “Do I have time for a quick puff on my pipe?” and “How do you tell a mother that she'll never see her son again?” that mark out designer Michael Long as a revolutionary not a reiterator. 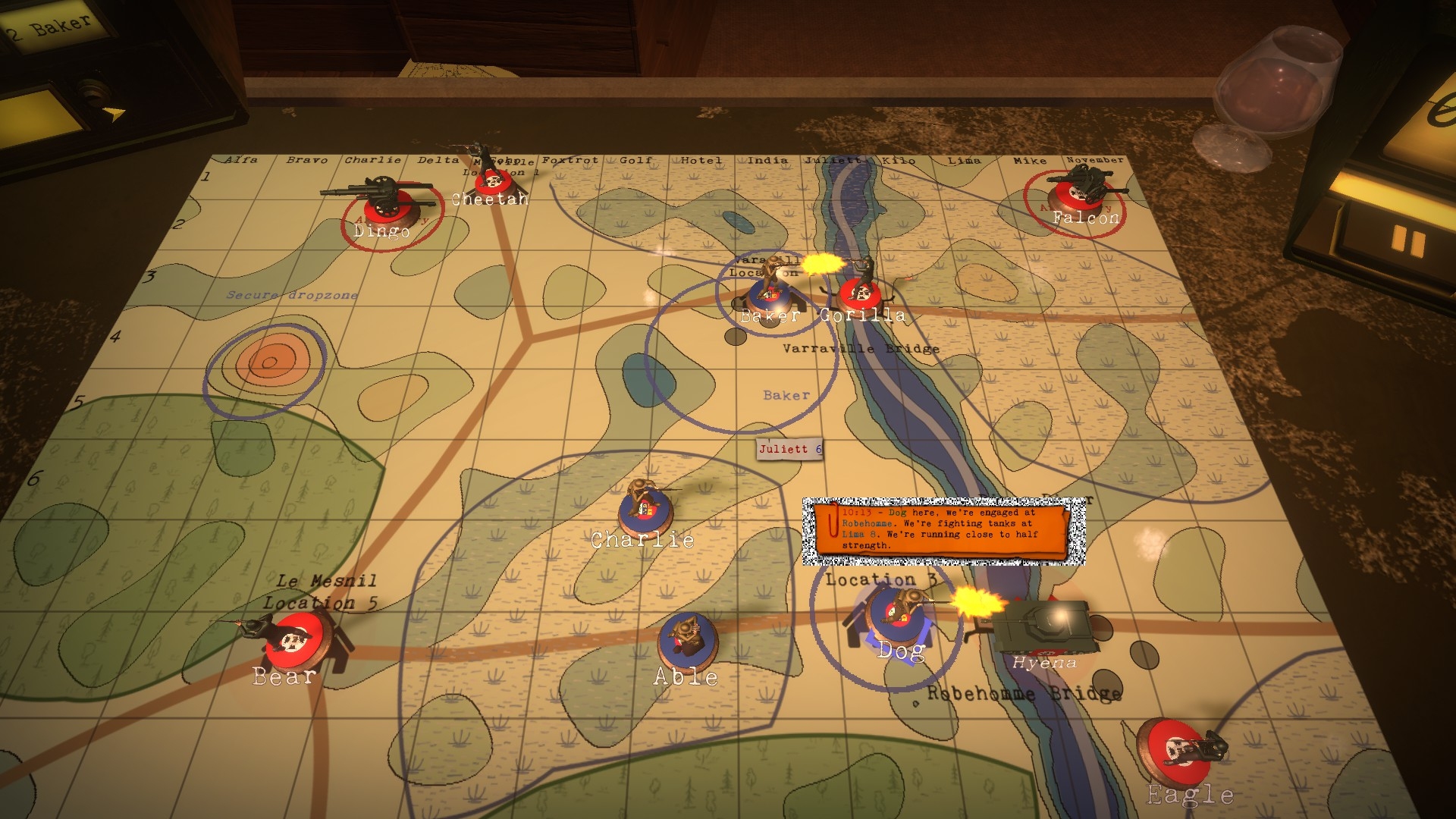 Very similar in concept to Serious Sim's debut title but in development long before that project broke cover, Radio General's central twist is also Radio Commander's. Rather than perpetuate The Helicopter Fallacy, a distortion inadvertently promulgated by hundreds of wargames over the years, RG strives to paint a more truthful picture of WW2 generalship. We are cast as slightly frustrated, slightly baffled microphone clutchers miles from the action, not omniscient whirlybird passengers marshalling armies the way grandmasters marshal chessmen. 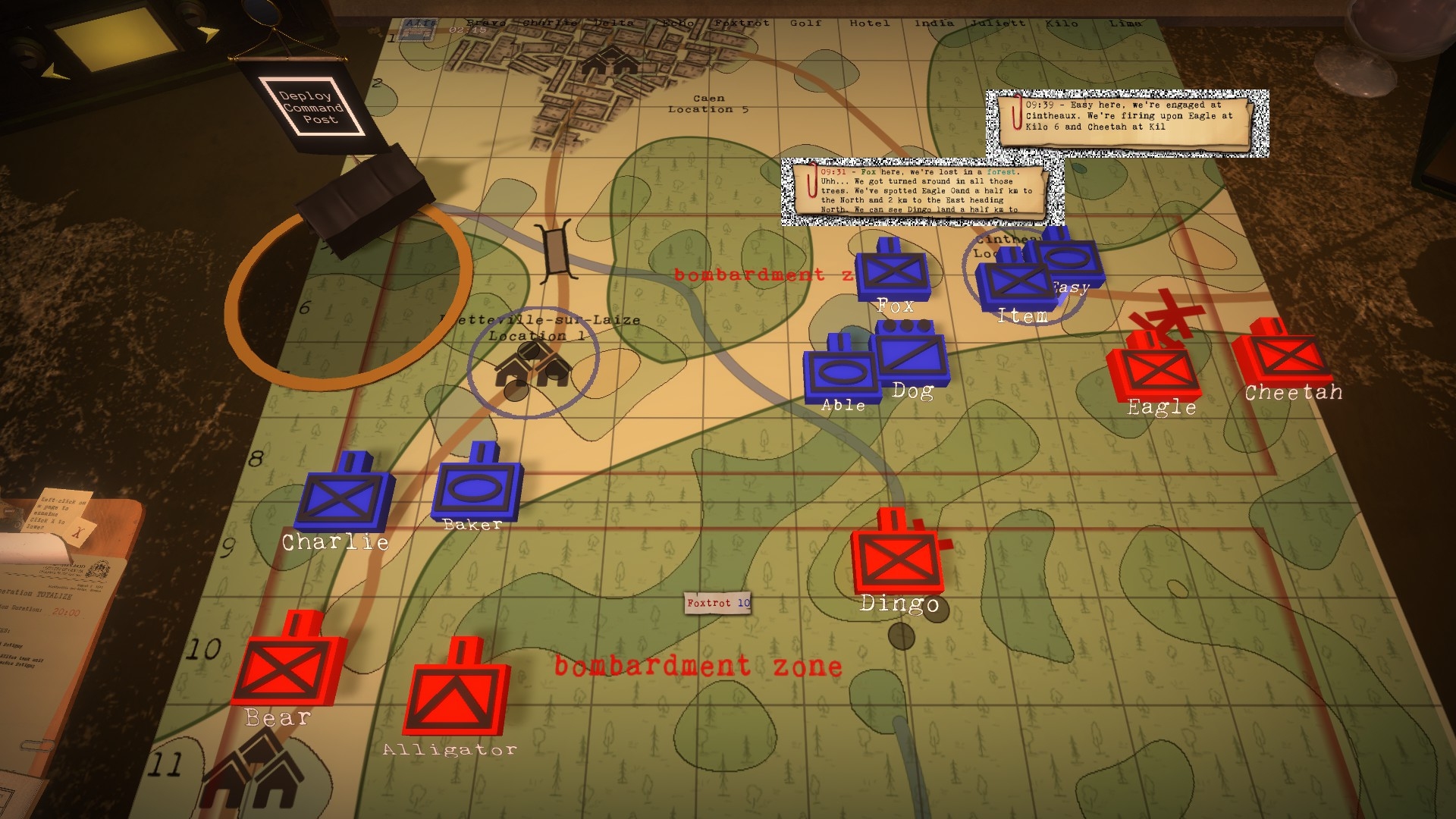 The NATO counters, or, if you prefer, dinky figurines, that dot the battle map are not bound to the combatants they represent by invisible threads. If you don't move them about the cartographic grid in response to radio reports requested and (hopefully) received, no-one else will. Half the battle in RG is ensuring the ruckus representation in front of you is accurate. A good third of a player's transmissions in any engagement are likely to be position checks. 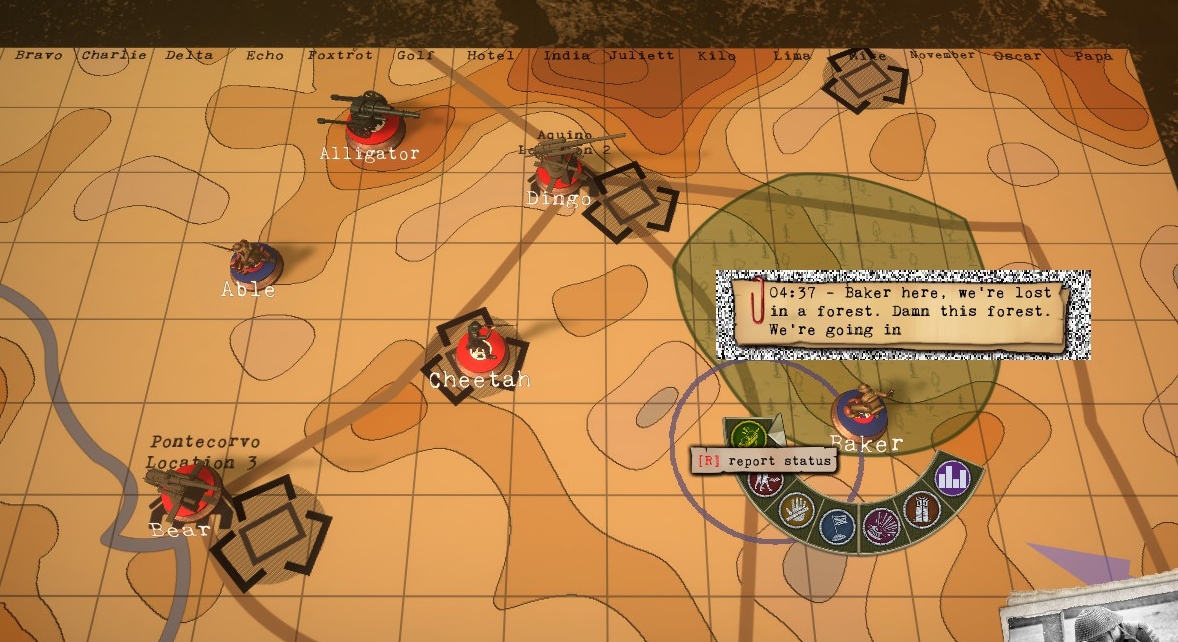 Things start getting really interesting when such requests generate anxious “I'm not entirely sure” responses, or are answered with bursts of ominous static. Units moving through forests or marsh run the risk of becoming disoriented and forces in pell-mell retreat are, understandably, far too busy to furnish you with coordinates. By using directional commands like “Head north” in combination with clues like “We can see a road to the west” the lost can become found. If the missing are incommunicado then your options boil down to “wait and hope” or “send out a search party, ideally composed of scouts or snipers”. 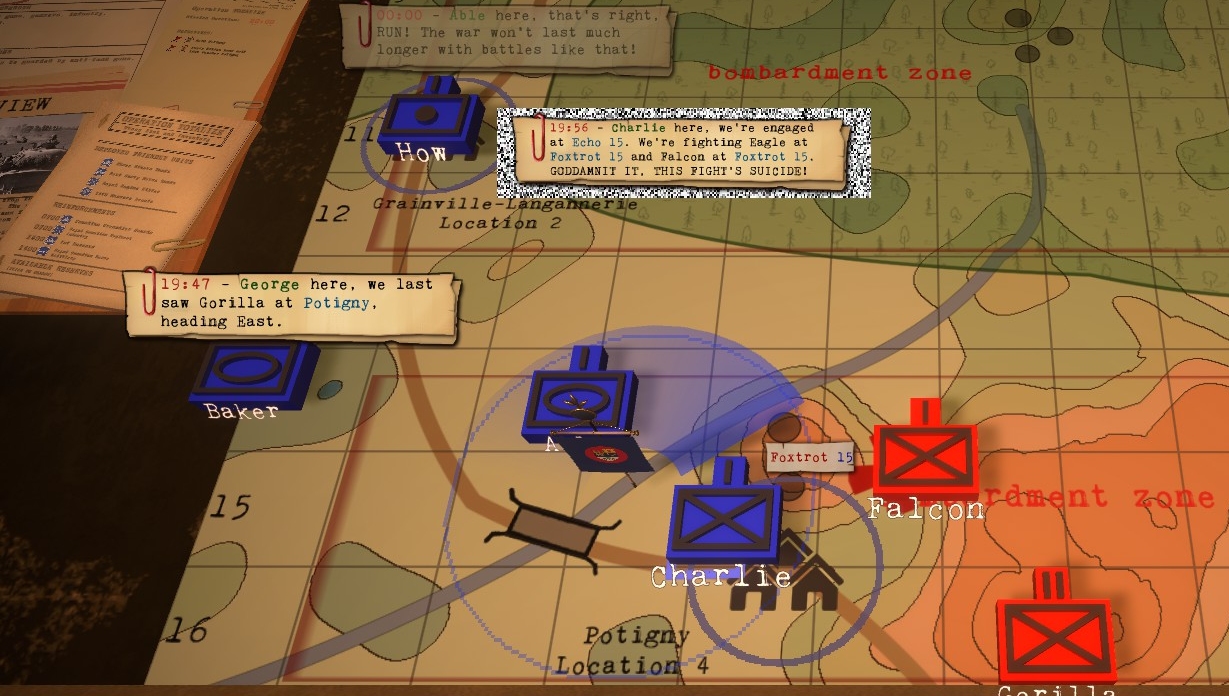 Unsurprisingly, Foolish Mortals don't shroud the battlefield in 15-tog Fog of War only to cut helpful holes in it with health and morale bars later. The glowing box of valves in your HQ tent is not only your sole source of positional information, it's also how you find out how bruised and disenchanted your charges are. The dearth of bald numbers (status reports tend to be couched in general terms like “Any more fighting and we'll be completely wiped out!” and “Too much heat! Getting out of Dodge”) help maintain a pleasingly fuzzy air. Unlike the subject of the last Flare Path review, this is a wargame that's meant to be played instinctively. Aggro accountants are tolerated but not fawned over. 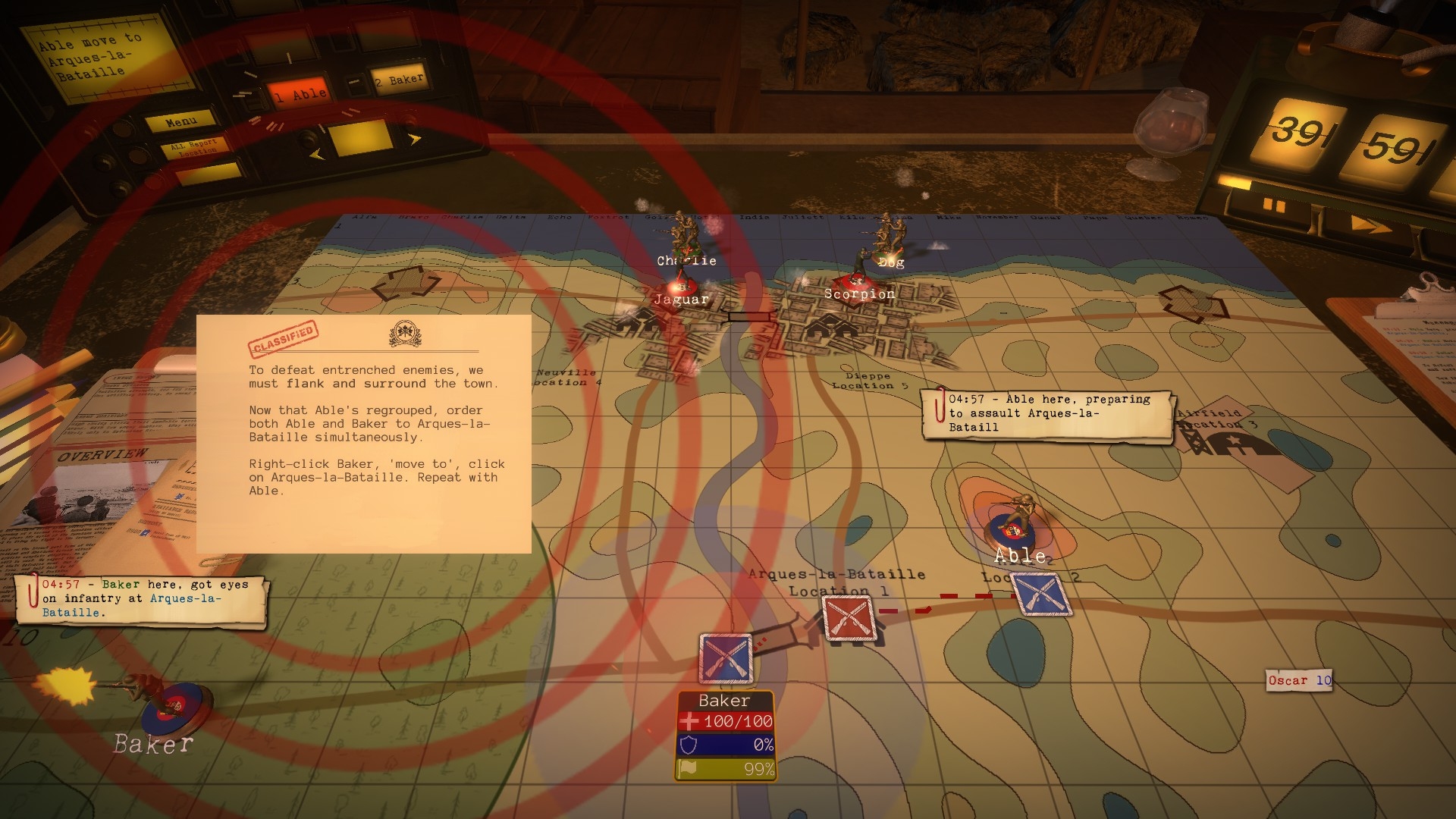 While the setting isn't quite as mould-breaking as the mechanics, Michael Long's decision to base the thirteen-mission campaign on the WW2 experiences of his countrymen does endow RG with extra character. The Canadian sequence starts on the bullet-swept beaches of Dieppe, and, after adventures on Sicily and the Italian mainland, moves to Normandy. Allied offensives predominate but there are also scenarios in which beachheads must be safeguarded and counterattacks blunted. Soft-edged victory conditions, persistent units with character traits, and a likeable AI add to the campaign's appeal. 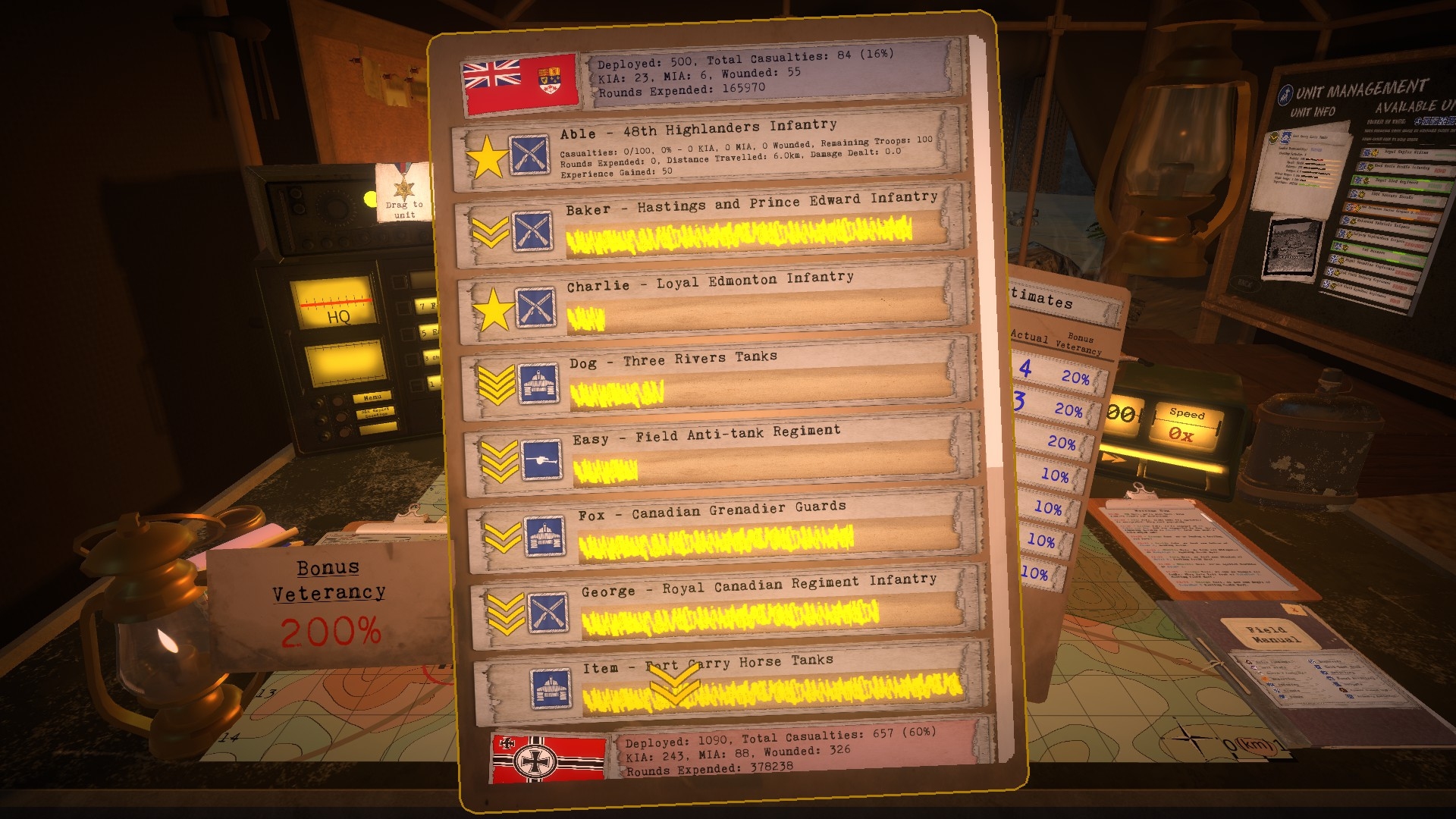 The game seems reluctant to wield its red “DEFEAT” clipboard stamp, preferring to reduce “Veterancy” awards* for poor performances than insist you repeat a battle. Given that I galloped through the campaign in about ten hours and only sipped sour vin de vanquishment once or twice, you'll understand why I'm hoping additional difficulty customisation options arrive in patches. As things stand the only way to increase challenge is to play without aids like “combat bonuses for accurately positioned figurines” (not a significant handicap). A tougher mode that rationed order issuing, degraded radio reliability, and made resting of core forces more important, would help RG uphold The Difficulty Compact. 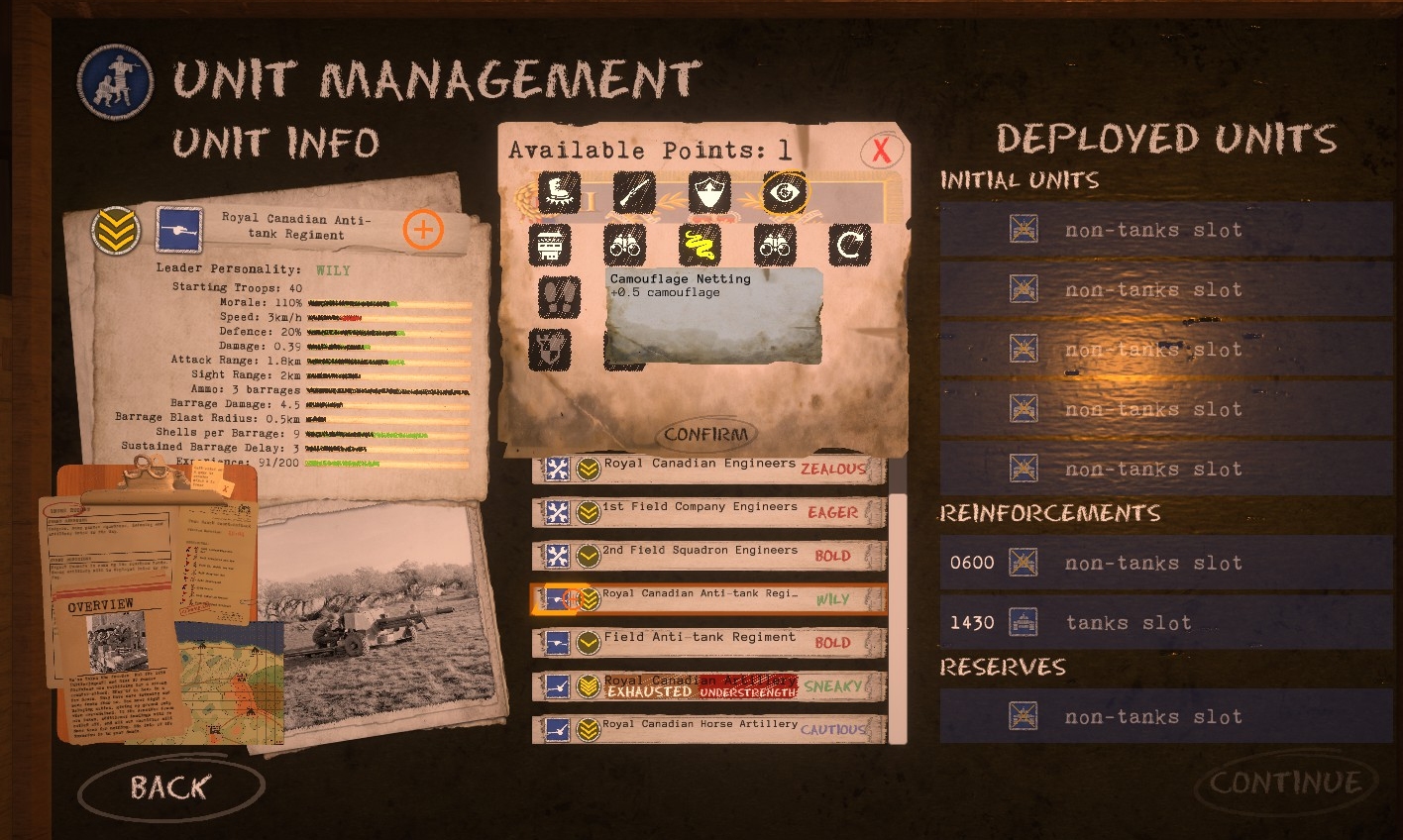 I applaud Foolish Mortals' unfashionable lack of interest in military hardware. The roughly company-sized units (tank units seem to represent squadrons) are differentiated with stat and behaviour-impacting leader traits like “BOLD”, “WILY”, and “TRIGGER-HAPPY”, experience levels, and those specialisms; weaponry is glossed over. You choose the Grenadier Guards to tip your armoured spear rather than the Fort Garry Horse not because they've got the Sherman Fireflies but because they've got the aggressive CO.

Fascinating full battle replays that show the sometimes substantial differences between assumed unit positions and actual ones, also shed light on a resourceful/rubbery artificial adversary who, finding one path to an objective disagreeable, will happily try another. Visually, the replays remind me a little of Command Ops played at high tempo – an evocation not to be sniffed at. 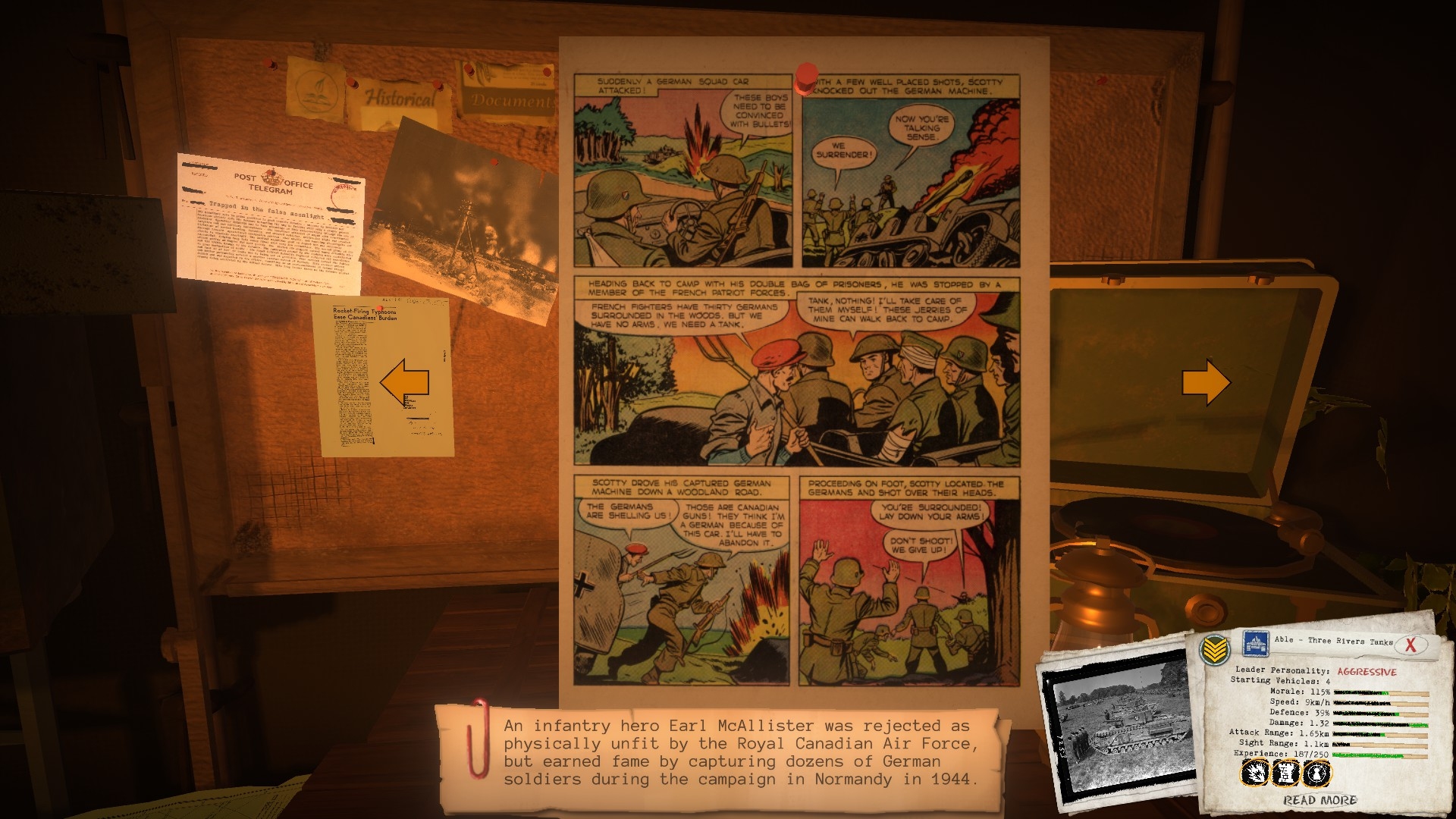 Radio Commander relied on characters and dialogue to humanise history. In RG the men you lead and the events you recreate are brought alive with help from a pinboard and a projector. Before every scrap you're encouraged to peruse a quirky selection of period docs and photos, and a short Canadian Army newsreel. Together with complacency banishers like the one I'm about to describe, these relics do a marvellous job of offsetting the tactical stolidity that, supplied without a counterweight, can leave serious wargames feeling clinical... callous even. 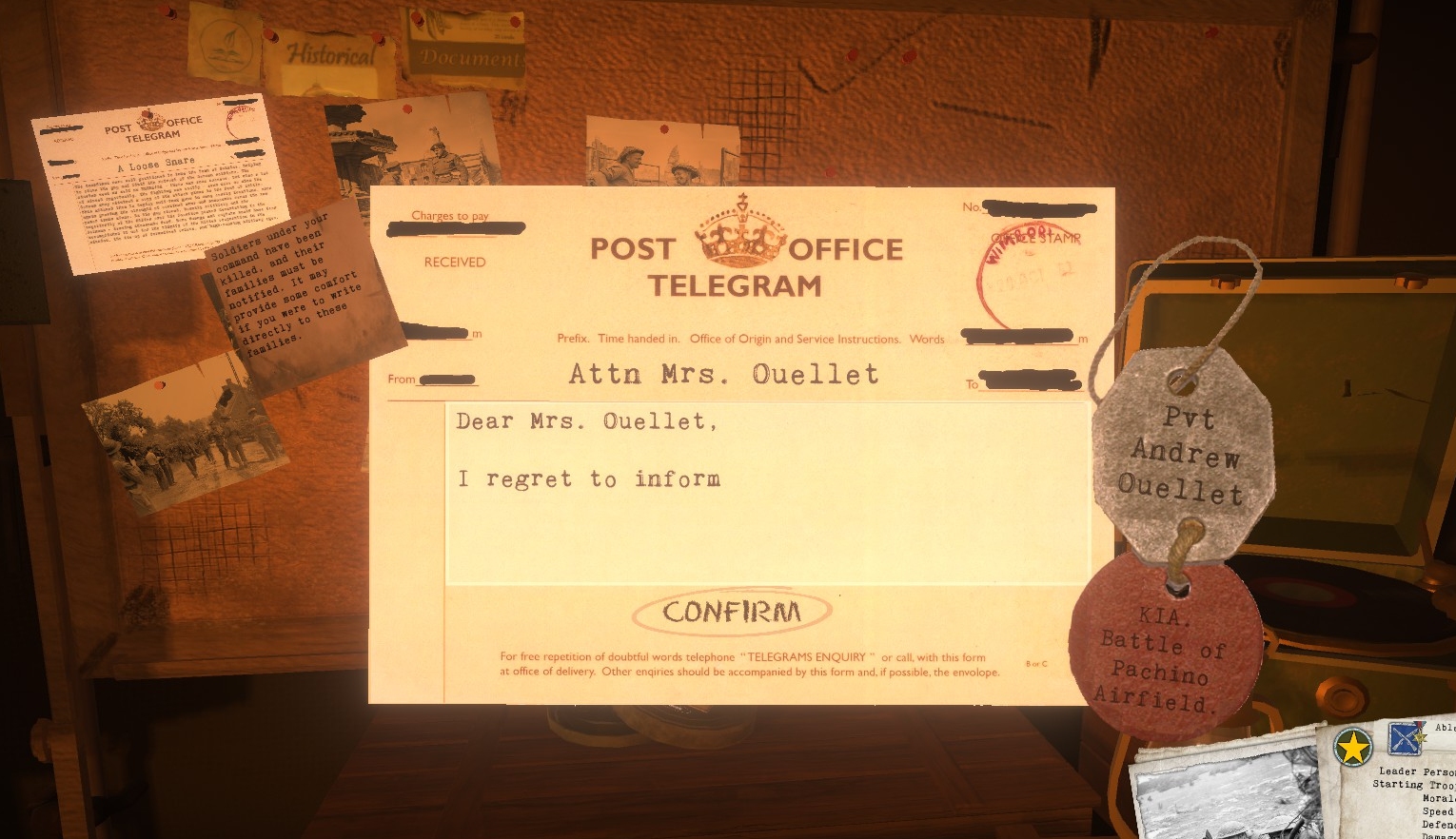 It would be easy to dismiss the game's KIA telegrams as gimmicks. However, because you are asked to type them relatively infrequently (I'm not entirely sure what prompts them. Obviously you lose troops in all engagements) and they cut to the chase so neatly, I feel they earn their place. The first time I was asked to compose one I found myself genuinely tongue-tied. How do you tell a parent that a beloved child has ceased to be? Even composing the first sentence is hard. 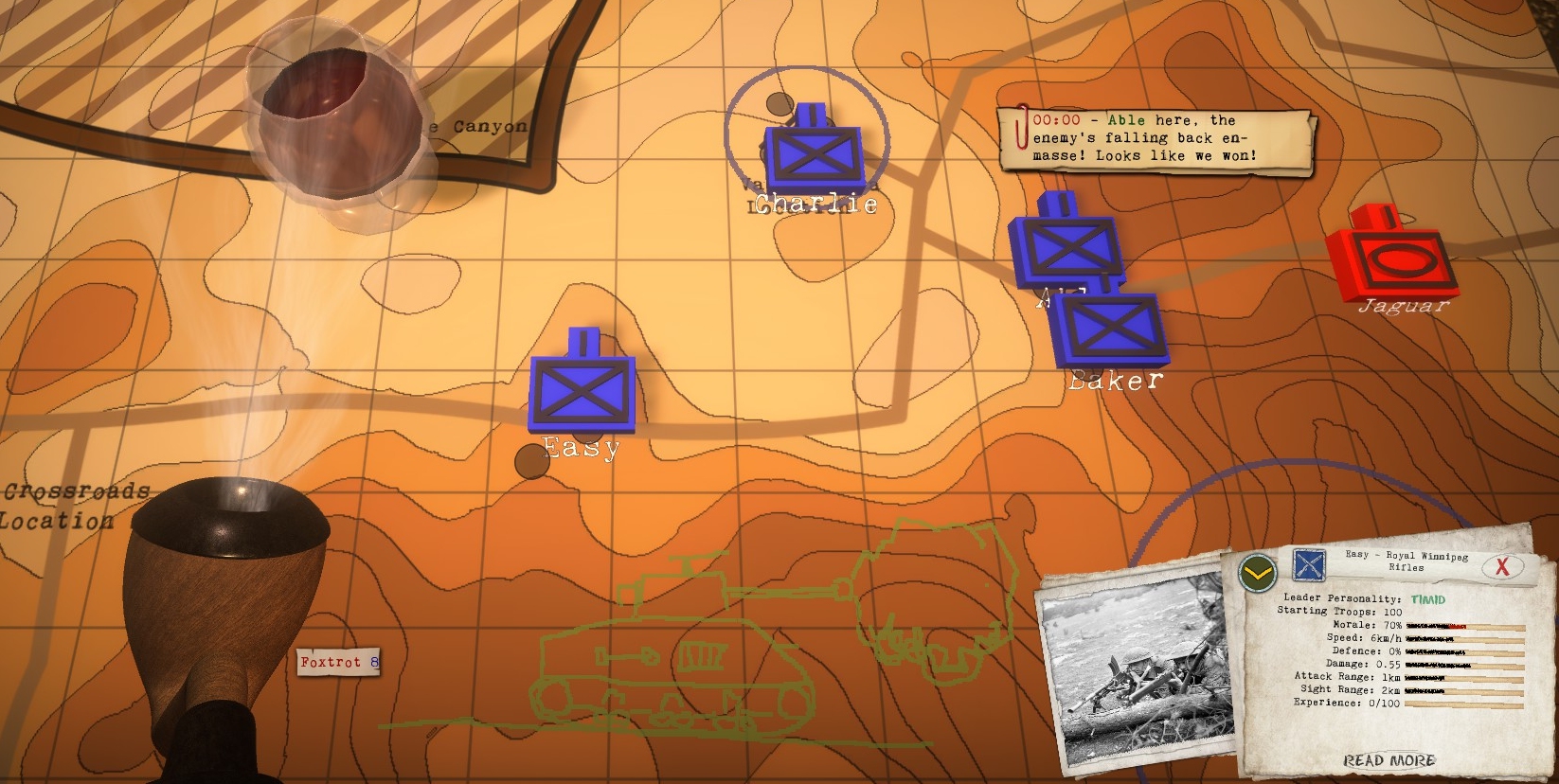 Some of RG's novelties are designed to amuse rather than prompt reflection. Obscuring the map with swirled brandy or clouds of tobacco smoke serves no tactical purpose whatsoever, but you'd have to be an extremely sodden blanket to never reach for pipe or glass for that reason. 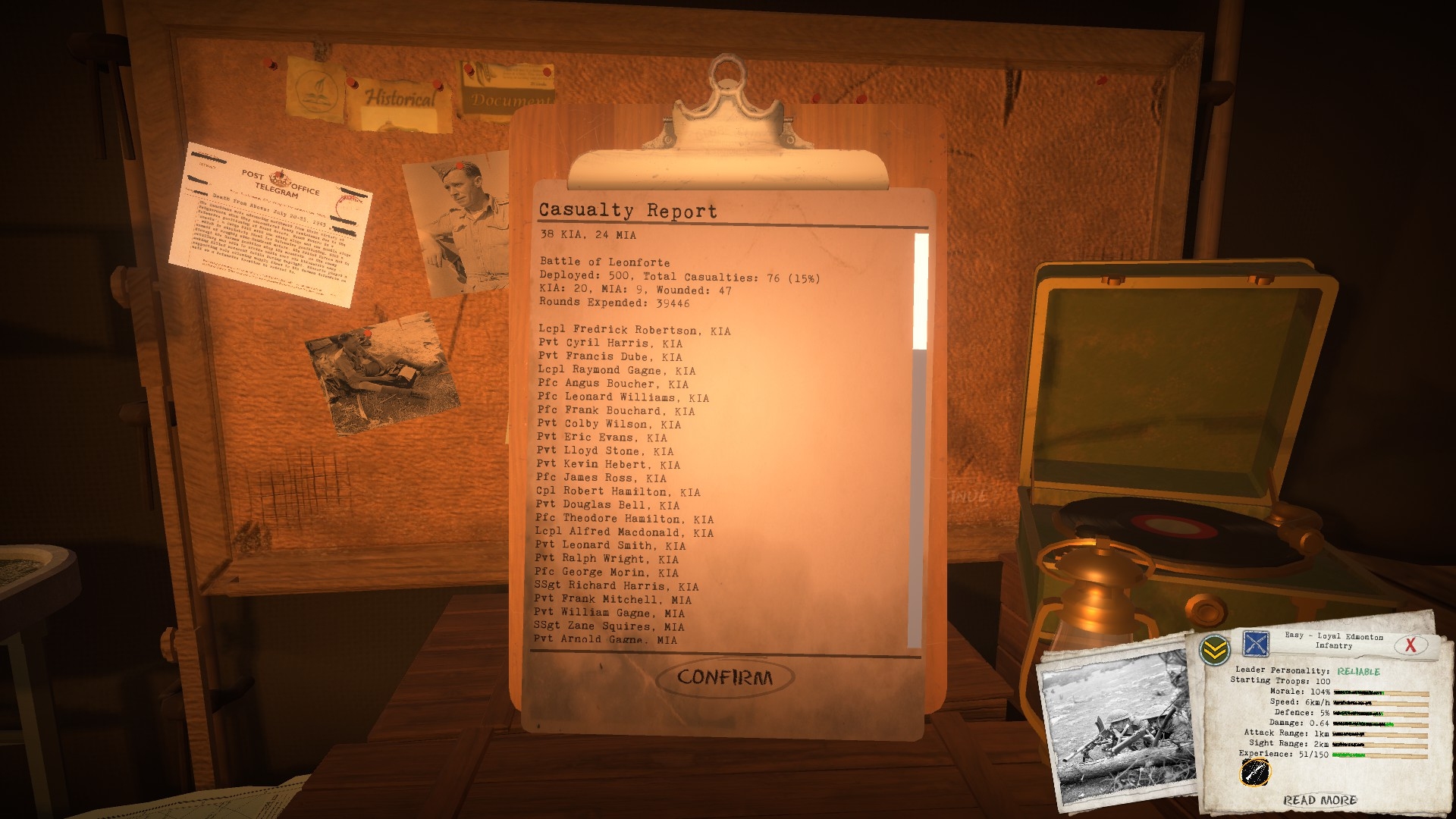 Like RC, the newcomer lets you draw directly onto maps and issue commands vocally if you prefer. At the moment the latter option unintentionally doubles as a difficulty magnifier; the voice recognition code struggled to distinguish some of my utterances so I fairly quickly reverted to keyboard shortcuts and GUI buttons. 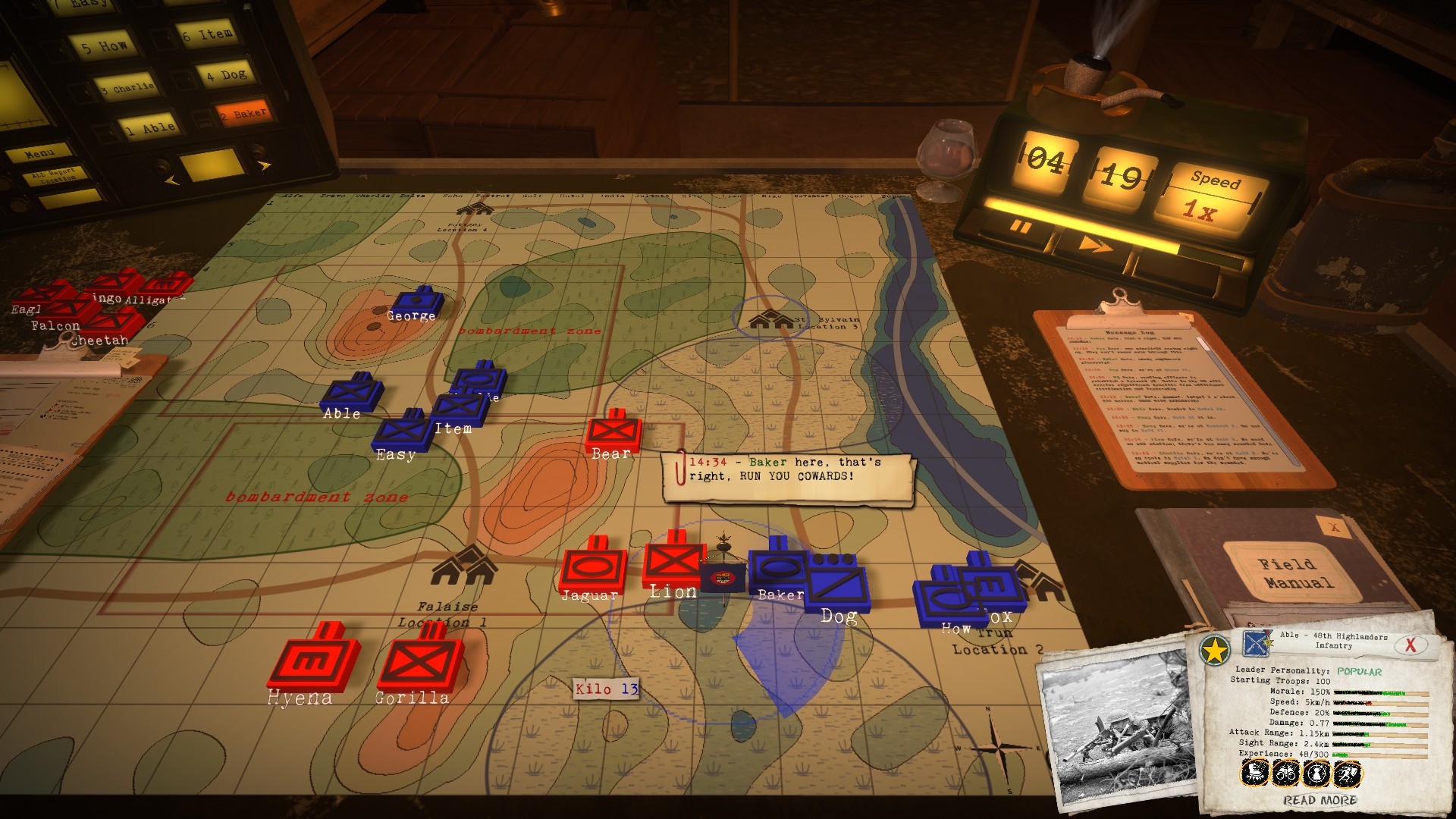 Not a bug, but, in my opinion, just as deserving of prompt attention is the game's default pacing. At present one of the least wargamey aspects of RG is its haste. Units scamper about battlefields and suffer losses in combat, surprisingly quickly. I frequently found myself wishing there was a half-speed button. You can temporarily halt the clock to catch your breath and issue orders, but shun immersion fracturing pauses and the clicking can get pretty frenetic at times. 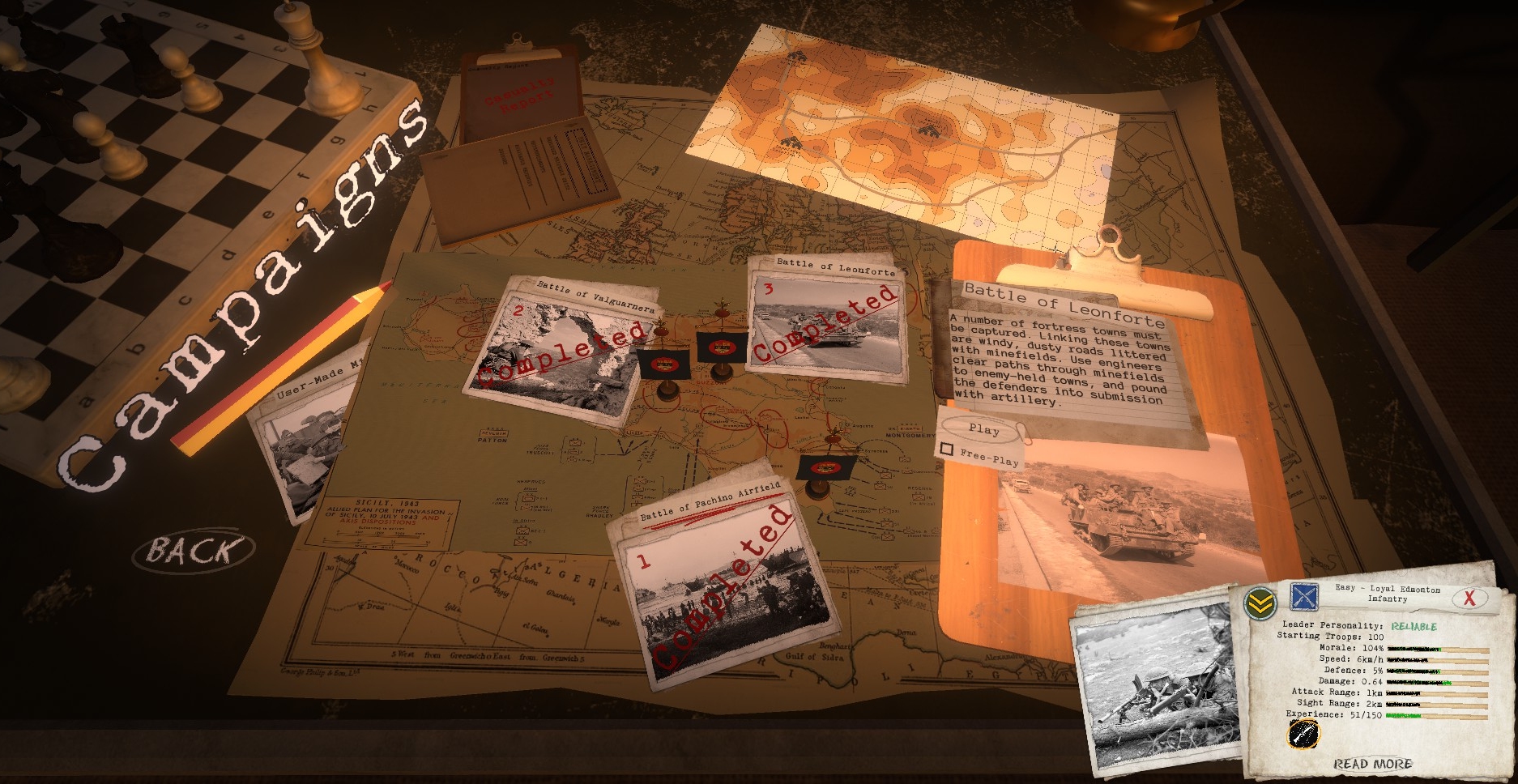 Readers hoping for a clear “Radio General is better/worse than Radio Commander” conclusion at the close of this review will be disappointed by the following sentences. I prefer RC's army-surplus cartography, but like the fact that I can easily craft my own battlefields and scenarios in RG. RC's mission scripting can be overbearing and fragile, while scenarios in its peer are pleasingly free of hidden armatures. RC's slower pace is more to my taste, but I find RG's AI more entertaining. RC has the superior voice acting, RG the more elegant command mechanics. RC has the intimacy (with more on the way), RG the eccentric charm. Both games boast shortish campaigns, modest price tags, and occasionally shoot themselves in the feet with lines of B movie dialogue. Both bring down The Helicopter Fallacy with a flurry of tracer-laced MG fire, and deserve our admiration, gratitude and patronage for doing so.