Inkulinati is a turn-based strategy game where you take control of a Master of Living Ink, or Inkulinati, as they’re otherwise known. Inkulinati face off against one another by drawing weird and fantastical beasts on the margins of medieval manuscripts and sending them into battle. It’s basically a fight to the death, but with doodles, and it's all in a stunning art style inspired by real life medieval marginalia.

Turns out these 700 year old drawings lend themselves very nicely to a 2D duel. The combat is easy to grasp ("but hard to master”, he mutters under his breath) and there’s a snappy flow to battles as turns flip between you and the enemy with an uncomplicated ease. I like this about Inkulinati a lot - it doesn’t overdo things. It’s clutter free. Each unit you command has only a handful of options and movement is limited, but this makes each decision matter. The folks over at Yaza Games clearly know what makes a turn-based battler tick, but I can see this appealing to both the more serious strategy-heads and players who want a more whimsical, relaxed vibe.

I commanded a snail to eat a spear-wielding rabbit whole. There was a donkey who played a double ended trumpet thing with its bottom that was the core of my unit. And by unit I mean a band of dogs with shields, spears, and bows. I am proud to have led them into battle, to have drawn them into existence. Such good boys, such good...molluscs.

There are neat thematic touches too. As you’d expect, ink acts as your main currency. Spend it and you’ll see your character’s hand reach onto the page and scratch your desired unit to life with a quill. As battles wear on, blots of ink also start staining the battlefield. Position your units over them and if they survive the chapter (round) you’ll get extra ink. Immediately, this forces you to plan ahead and consider how you can both nab this precious resource and dry out your opponent's pen. Do you risk putting your canine friend in a poor spot for extra ammunition?

I particularly enjoy the way each chapter’s end is marked by narration on the page, quite literally the backdrop to your brawl. Not only is it a fun thing, it’s a device that quietly ramps up the intensity. Just by glancing at the walls of text darkening each page, you know the fight’s reaching its climax. And if it's really dragging on, the apocalypse kicks in. Both you and your opponent’s side are set alight, with the flames licking the edges of the arena to begin with, before they start creeping inwards as each chapter comes to a close. Any unit unfortunate enough to be standing on one of these tiles will be cooked to a crisp. It’s a clever way of forcing both sides to take the initiative and it opens up a realm of new, often hilarious possibilities. 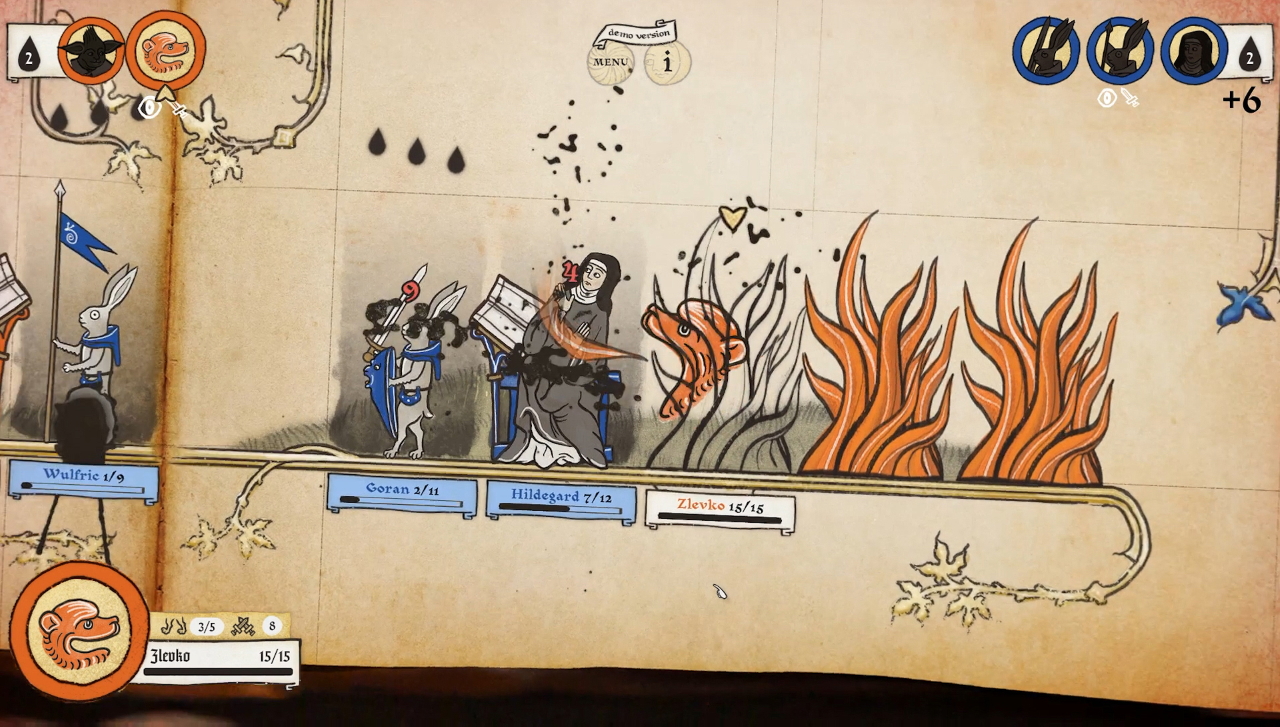 By this, I mean getting your feline bishop to shove your opponent’s helpless Inkulinati into the raging fire. Each unit, including your own Inkulinati, is able to push enemies left or right, and they’ll slide across the page, through enemies, allies, and obstacles until they hit an open slot - or a fiery furnace. I had one game where I was totally on the back foot. I’d run out of ink, my rabbit army was hamstrung, my brow was furrowed.

But then, then the burning! Quick! Imagine you're seeing a camera zoom into my eyes and they're doing the reflecting flames thing. I noticed there was a free slot by the enemy’s Inkulinati, so I got my trusty archer to shove my own Inkulinati right in front of them, and after a second or two of grinning, I flung them back from whence I’d came, into a tile I knew would burn up when the round ended. The ol’ last minute swaperoo, sealed with a chef kiss. Mwah.

It's safe to say I’ve come away from Inkulinati’s free PAX X EGX demo feeling enlightened, even a little giddy. Inkulinati is due to release around Q2 2021 on Steam, but the free demo is out now and I urge you to give it a shot.