From darkspawn to archdemons, Dragon Age is renowned for its epic battle against undead beasties seeking to wreak havoc in Thedas. However, my favourite mission in the entire series isn’t a magnificent fight, nor has it anything to do with high tales of monsters and men. My favourite mission is a fancy party in Dragon Age Inquisition.

Wicked Eyes and Wicked Hearts is a main quest that sends the eponymous Inquisitor to the Orlesian court, which is essentially Dragon Age meets The Great Gatsby, but if everyone had an extremely realistic French accent. Your job is to prevent Orlais’ Empress from meeting an untimely fate. Most of Thedas is a mess owing to both a demon invasion and about two and a half civil wars happening all at once. If you’ve played Dragon Age 2, you’ll be familiar with the hellhole that is Kirkwall, and that’s indicative of how a lot of towns in Thedas look by the time you start Origins. However, Orlais is a different kettle of fish entirely. 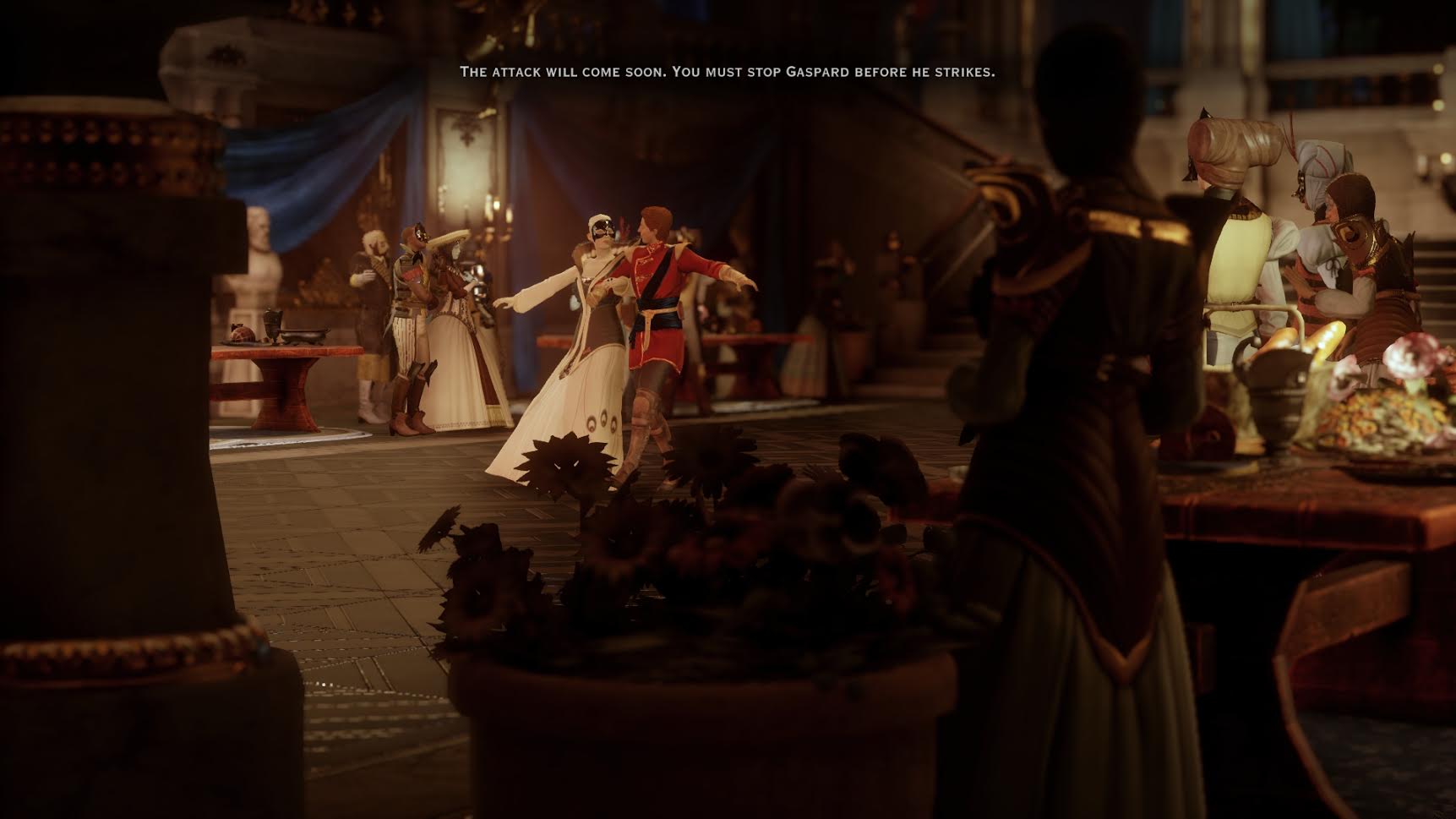 So you dress up, all fancy-like, and hit the Orlesian ballroom to paint the town red with three of your best Inquisition pals. Thing is, it isn’t really a social visit. The fate of Orlais, and by extension Thedas, is in your inquisitorial hands. You do have to pretend you take the rules seriously, though, so you need to make sure that your court approval is high throughout the mission. Basically, you need to be the belle of the ball. And it's great, because it's such a departure from the rest of the game. Nay, the series.

The best part about it is the art of subterfuge. You have to pose as a guest and talk to all the high-and-mighty Orlesian nobles, but you also need to make sure the assassination attempt fails. So every so often, you and your mates need to sneak out a side door and do some off-limits exploring. But every moment you’re away, you lose court approval, which means you have to do your sneaking very quickly.

The palace is filled with enemies of different kinds, so you need to, e.g., hang around eavesdropping in the hall, then run out to the garden and beat some people up, then hurry to open a secret passageway, and, on your way back, unlock a man who’s been handcuffed to a bed. Finally you come to a screeching halt outside the main doors, and make sure you look nice and dapper before casually -- and literally -- waltzing back into the ball. 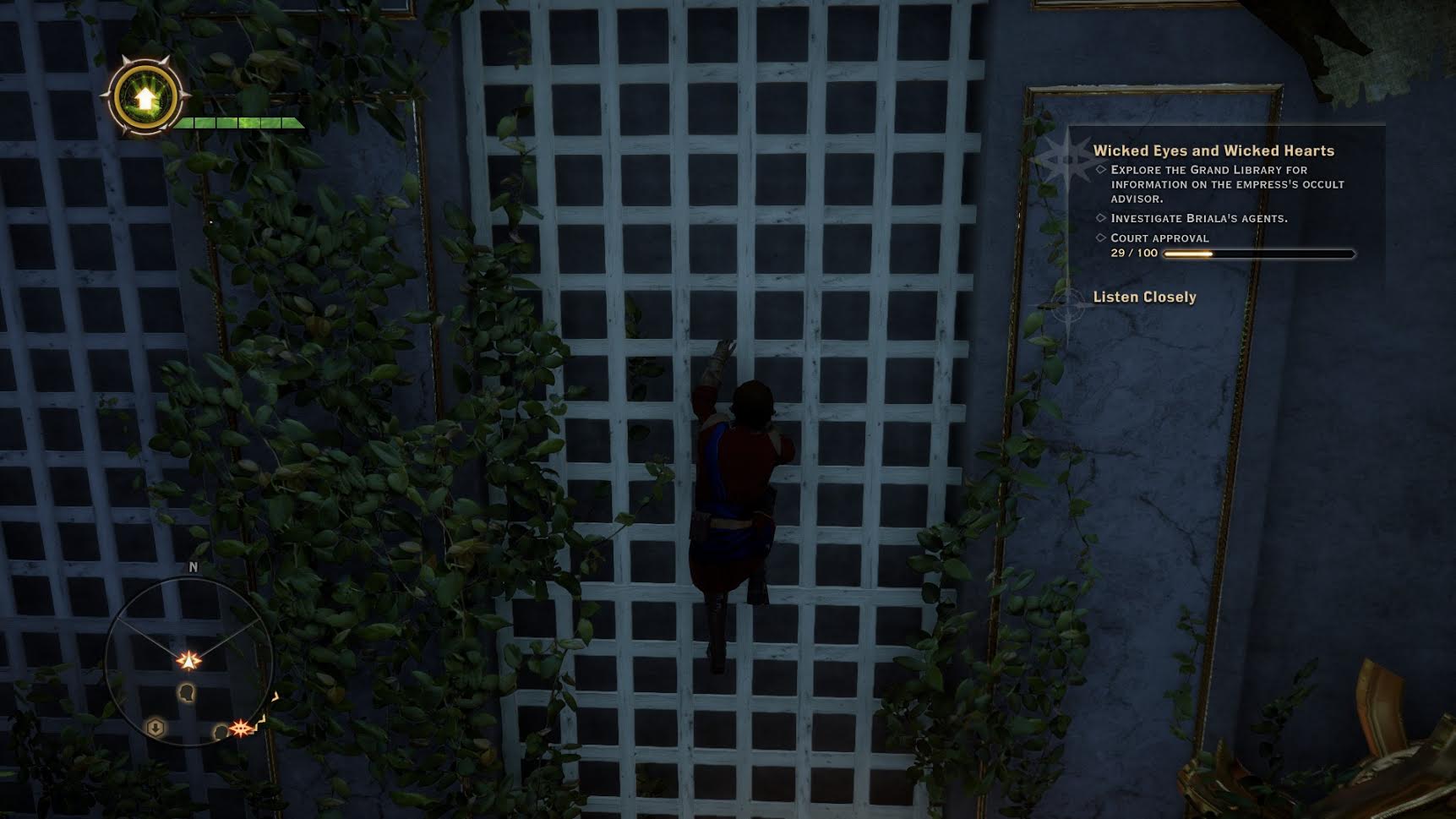 But you keep having to dash in and out to stop people thinking you’re being a bit of a dryshite. No marks lost for spider-monkeying your way across the garden trellis though, so you can be as wild as you like outside the party, as long as you’re back in time to get away with pretending you just had to do a wee. It’s a completely different spin on the kind of war the series is known for, balanced with an almost-slapstick pacing. All that’s missing is the Inquisitor getting confused because they accidentally invited two dates to the ball. Wuh-oh!

This mission is actually the longest one in the entire Dragon Age series, but it’s a solid hour of absolutely quality content. It does end in a beastie boss fight by the end, but that’s not what’s great about it. There’s something incredibly satisfying about slow-dancing with the Empress in a crowded room and whispering about very scary rich people plans. It’s the fact you need to prepare a face to meet the faces beforehand that really makes this unique. And then you decide the fate of a nation over canapes. Plus, Dorian is very good at parties.