If my second favourite thing to do in Assassin’s Creed Origins is tomb raiding, my first favourite thing is travelling by eagle. Your character, Bayek, has a pet eagle called Senu which constantly follows in the sky above him, and you can possess it at pretty any time, sweeping your view up into its own. As Senu you can fly freely, ascending to extraordinary heights and roaming as far as the map allows, while Bayek waits far below.

Here’s the thing. If Bayek is standing, he’ll remain motionless, but if he’s riding a mount and you’ve set it to automatically follow the roads to a waypoint, he’ll keep riding as you fly. And thus you get to experience Egypt from the best seat in the house. There are limits: you can’t stray too far from Bayek, else he’ll just stop. But it’s remarkably free.

For a world so studded with monumental structures, riven by mountain ranges, smothered by dunes, and cut through by the Nile itself, getting to see it from above, alive with animals and people rather than through the abstraction of its map, is, well, it’s bloody marvellous. It’s beautiful and enveloping, a chance to forget the weird and emergent shonkiness of the game when it’s up close and personal. Well, apart from when you spy from afar a mad pileup of rebels and soldiers and a horse endlessly galloping into a wall.

In this Egypt, the pyramids of Giza are somehow almost always visible, there on the horizon, luring you into the world with the promise of spectacle. When I glide over the crest of a hill, I’m often bowled over by the view it reveals. And as Bayek races along the road below, you get an exhilarating reminder of the scale Oranges works at. 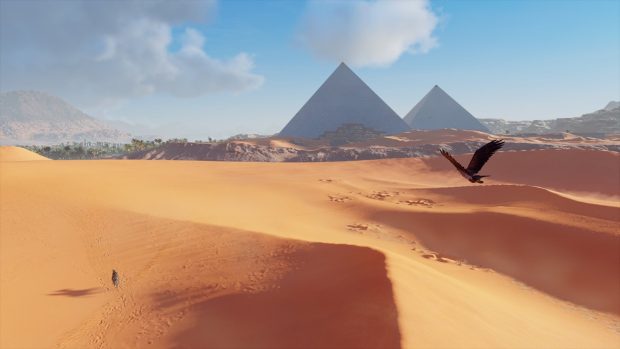 That’s a scale of both size and time. On foot, you get a sense of two worlds colliding, of the efforts of Greek settlers to build over the top of the remnants of thousands of years of Egyptian culture. But at height the clash is stark. You see how the Greeks’ clean-lined architecture stands over old sandstone walls and gateways without reverence, and how age has worn these edifices away.

It’s not just about the visual punch. I tend to leave the UI on and that makes traveling Egypt by eagle pretty practical, since Senu is fundamentally just a mapping mechanic, superimposing points of interest on the screen and allowing you to set waypoints without having to leave the world. That means getting to go on journeys of constant joyful distraction as you take little stop-offs, instantly switching back to Bayek to clear a fort, raid a convoy carrying precious resources, dive to open a booty-filled chest submerged in a river, smash up a Ptolemy statue. It’s open world map-clearing without the map.

Because of the whole synchronise thing, Assassin’s Creed was always about getting to high places and taking in the view. The eagle is an amplification of that, merged with Ubisoft’s habit of imposing open world design orthodoxy on all its games. It’s Far Cry’s enemy-marking binoculars, as transmuted into Far Cry Primal’s psychic owl and Ghost Recon’s drone. But Senu gets to be its own beast, a chance to experience a magnificent world from a fresh perspective. It’s the only way to travel.