After a save game mishap I've tagged in for the WIT of The Long Dark's [official site] second story mode episode. Don't worry – the save game thing was a review build issue, not a thing for regular game owners to fret over! But it's meant I've needed to try to marshal my frustrations and pleasures with the game into something approaching coherence. Stay with me as I pick through Wot I Think:

Right now I think a bear ate my shoes.

That happened yesterday and I am still cross about it. I mean, partly I'm cross about it because the animation of being mauled by a bear is very face-centric. The bear is an above-the-waist encounter if the struggle in the cut scene is to be believed so at what point did the bear ruin my shoes? Did it wee on them? Did it nibble them as I lay on the ground bleeding out? Did it tread on my feet like a toddler at a formal dance? WHAT HAPPENED TO MY SHOES? 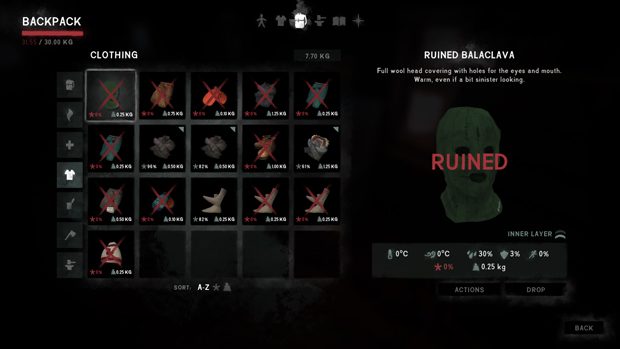 The remainder of the crossness splits two ways.

1. I'm cross because those were my special shoes which I maintained by cannibalising leather from other shoes I found around the area. Why would I carry another pair of shoes when I can repair these indefinitely? And so no building in my current locale has a single pair of shoes left. For reasons of this being a frozen wasteland I have decided that I cannot continue to hunt the bear barefoot (or in sports socks) and so my only remaining option is to trek two zones away (in my socks and thermal underwear) to an abandoned garage and hope I ignored a pair of boots in a locker during the heady days of pre-barefoot hubris.

I'f I'd been in the sandbox I would have tried to fashion myself a pair of shoes out of the cured animal pelts and animal guts with which I've littered the home of the guy who has beef with the bear. But this being story mode that information is gated and the workbench has no crafting options for clothing. An experienced trapper wearing a whole bunch of animal clothes who gets you to hunt thing and thus maybe also have a surplus of animal skins and cuts to hand feels like a really good point at which to introduce crafting clothing. Especially given one of the tasks he makes you perform is fetching a cured bear pelt and using it to repair his bearskin coat.

Instead the trapper acts as a knowledge checkpoint only for fishing, hunting and foraging (which manifests as "putting mushrooms in a box outside his house"). I get that the devs want to make sure you definitely have those skills, but at this point in the game I've been foraging on and off for hours - mushroom tea has been a useful meal and lichen a vital salve - with the game interface itself providing info as I picked those things up. It feels weirdly late to be bunging in some more tutorial.

Maybe there's a sweet spot where there are people who will have survived until now but might have bypassed that other stuff or not played the sandbox mode, but for everyone else you'll either have made slow enough progress you've started to find and use those items on your own, or you're one of the people who can get through story episodes in record time because you've perfected your survival skills in the sandbox and so wouldn't a mushroom/rosehip/lichen/cattail fetch quest just be boring busy work?

It's the relative open-ness/meandering of the game's survival coming into conflict with a linear story progression. The Long Dark story mode keeps throwing up conflicts between what I know both inside and outside this playthrough and the rate at which it wants to impart that knowledge itself. 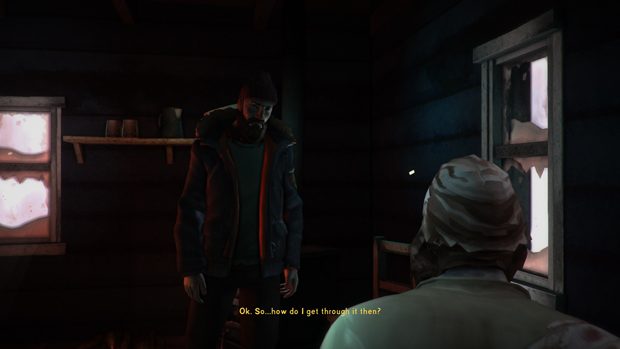 Anyway, this dude has made me jump through some Hogger-level hoops with foraging stuff attached to a boring fetch quest and now he's all "I will only do the magical thing to ungate the narrative if you take out this shoe-eating bear". It's a McGuffin of the highest order but complaining doesn't make me any less shoeless or any more bear-less.

I also tried to give him some objects to increase my level of trust with him in case better interpersonal relationship stats meant he would shower me with gifts (or shoes). But the game seems to have bugged out on that front and despite a heaving inventory I can't gift him anything he wants as it won't show up. That's been my only experience of bugs in the game, by the way, although I know people have experienced worse. Hinterland seem to be aggressively patching out problems which is to their credit, though.

2. This bear situation is just not interesting. You follow it about and shoot it in a specific number of locations, often incurring a mauling along the way, and thus sitting through the same boring mauled-by-a-bear animation.

I have shot the bear in 4 out of 6 locations. It was 3 out of 6 but then the shoes became a pressing concern. Then the shoe thing turned interesting for a while and now I don't really know where I am with the game or who it's for or whether it works or doesn't in story mode

What happened was I decided to put the plan I mentioned earlier into action, trekking across a frozen lake, through a tunnel in the rock and back out again, then along some rails in a blizzard at night, desperately trying to remember landmarks on my way to this garage. I'd been in such a huff I'd left my bed roll behind and thus couldn't rest (which is how you save progress) until I got to the garage and thus the bed in the garage, but if I saved there and there were no shoes to be found… A conundrum.

And so my uninspiring story mode journey has now been punctuated by a furious stomp across the wilderness, tapping into landmark memories I didn't remember forming, battling wolves, taking strategic campfire stops, circling wolves, snacking on bulrushes, then almost blinded by the snowstorm, just pushing onward, hoping that one of the silhouettes would turn into a building and the absolute relief when it did. Oh, and then the stumbling around, lighting matches just to find my way through the clutter to the office with the bed in it and then the stress of whether daylight would yield shoes and the fact that it DID! Oh my. 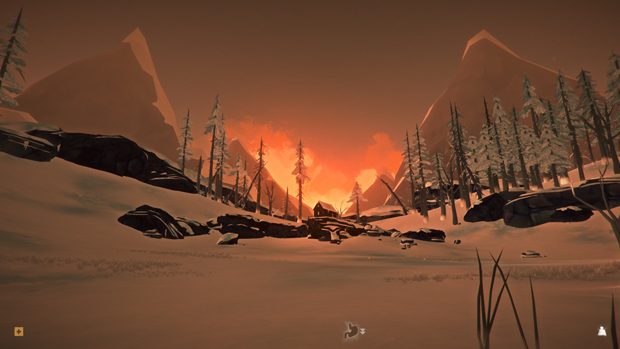 Here's where I am with the game, then. In story mode a lot of what Hinterland have given me to do just feels like tedious fetch quests as a way of directing your survival attempts. Go and repair this, go and collect that, head over to here, visit there. Role-playing as a stranded bush pilot comes into awkward conflict with any knowledge you have as a player from early access too. You know how to make far more than Mackenzie, how to do far more than Mackenzie, and yet you're trapped inside his brain, waiting for other people to offer their knowledge.

Curious to see how other players were finding the experience, I've read accounts from people frustrated by the difficulty as well as by the easiness – some are finding the bear a slog like me, others are craving an ironman mode to give them a challenge. To me that speaks to the fundamental difficulty of what Hinterland need to do here in story mode. The simplest way round it (conceptually rather than technically) would be to allow players to set the difficulty according to the experience they want to have as you can in the sandbox. But then that might mean players don't get the shoe-trek type rush of emotions I did because I'd have whacked the whole thing down to peaceful and enjoyed the scenery and thus where is the drama of Mackenzie trying to survive? 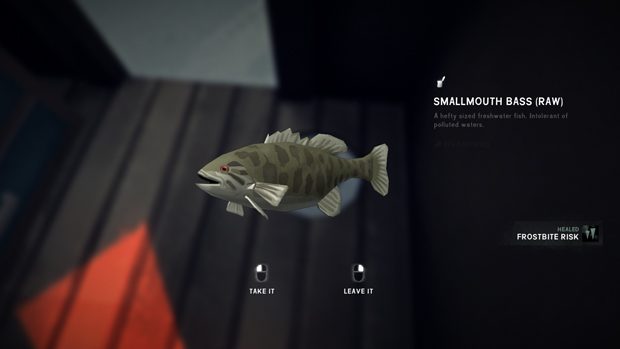 But in the current scenario I've had my shoe trek but I've also boredom-quit the game a few times which I never do in the sandbox. I don't care about the characters I've met and Mackenzie's quest to find his friend feels bizarre given the amount of time it's taken me so far. The bear nonsense has been pootling along for so long that I'd actually forgotten that I was doing it to trigger a McGuffin and that the friend was even out there waiting. I mean, presumably she's got grandchildren by now, or has been frozen in an ice cave for thousands of years or something.

I've also not mentioned the aurora stuff which is pretty telling in terms of how I'm viewing it in relation to what I'm spending my playtime on. The aurora is the one thing I remember players kept coming back to with each patch – was it in the game yet? Is it in sandbox or just single player? CAN I SEE IT? WHERE IT IS? PLEASE ADD IT! And so now I've see it and I've screenshotted the heck out of it and recorded videos of it – it is interesting and beautiful - but it feels so divorced from what I'm doing right now which is trying to stock up on fish so I have the energy to care about the bear again. 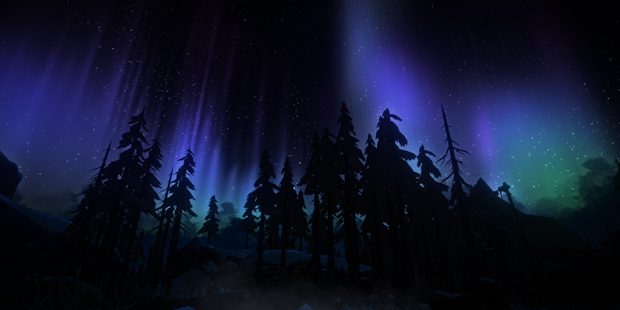 All of which is why I honestly don't know where to place story mode on the scale of bad and good. The story itself feels slight at the moment. You've been given the symptoms of the mystery but nothing to really flesh it out. Instead the episodes have been about surviving from point A to point B or collecting a certain amount of X. I've met some characters but the stories they've told have also been slight and not very interesting – coming to The Long Dark off the back of my Tacoma review really didn't help given the latter's virtuosic environmental storytelling and characterisation.

But then The Long Dark put me in a situation where I had a rush of emotions you'd hope to provoke in a survival game and a story I enjoyed fleshing out for friends. I can't save scum (easily) because I can only load either the most recent save or the most recent narrative checkpoint and so I'm hanging on to this run like grim death, knowing the alternative is to lose all of that progress and work. That's… a good thing? It's a good thing in that it makes me inclined to stick with the struggle and forge on, but it's a bad thing in that if I get into a particularly tough spot – like if there had been no shoes at the garage – I would have lost too much time and progress to be willing to invest again. 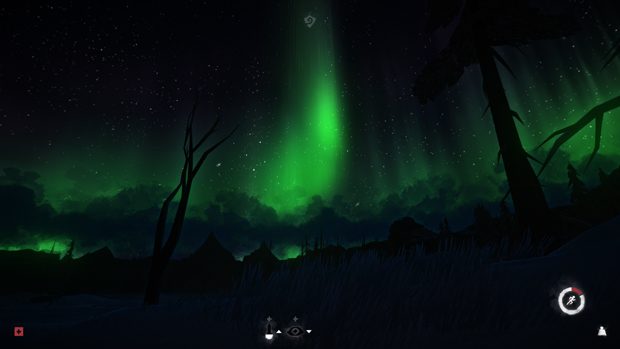 I think Hinterland are trying to give players relatively simple objectives in an intentionally difficult environment to try to provoke stories, but that framework is too reliant on repetitive busywork and too unpredictable in terms of whether it induces those cool stories. It also keeps veering back towards being a tutorial when, as a game which has been in early access for years, I'd say a lot of players will know far more than the game assumes.

As for me, I'm going to go trundling after that blasted bear again just to force an advance in the narrative via this irritating trapper who won't teach me what to do with the remnants over everything I've trapped. Once I've managed that (if I manage that) he can sit in his stupid shack reminiscing about that weird bush pilot who now carefully takes off his shoes every time he goes to hunt a bear.