The Longest Five Minutes begins where most games end: the final boss. Plonked in front of an unholy baddie, the hero of this quaintly old-fashioned JRPG has only five minutes with which to pummel them off the face of the earth. It sounds like a pretty short game, but thanks to the awesome power of extended, time-dilating flashbacks, those five minutes are soon blown wide open. Essentially this is a standard-ish JRPG told out of order, and that's a novel enough hook for me to look at the Steam page and not dismiss this retro-styled adventure out of hand. It helps that it's the work of Disgaea developers Nippon Ichi.

One of my major issues with RPGs is the amount of padding shamelessly crammed in, and I feel like The Longest Five Minutes' chronologically tricksy premise is the perfect opportunity to chuck a lot of that away. Starting at the final boss, conversations between the amnesiac hero and his companions (and the big monster you're all duffing up) give way to self-contained flashback segments, retelling key moments from the hero's journey, but without feeling the need to cover every insignificant hamlet he visited along the way. 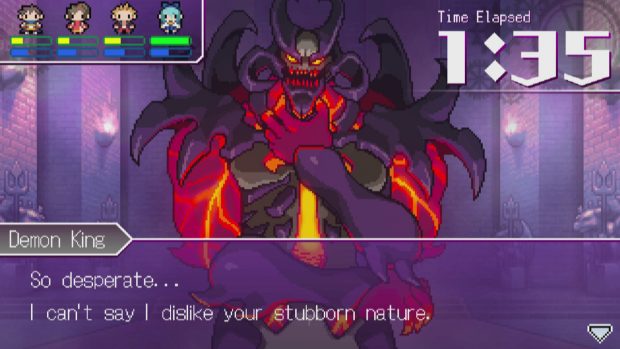 However, aside from the clever framing, it doesn't sound too revolutionary. A JRPG boasting top-down exploration, peppered with random, turn-based battles and a trio of minigames. So if you're expecting something highly inventive like Half-Minute Hero, or something eminently replayable like the underrated JRPG roguelike One Way Heroics, you may be in for disappointment.