The first robot to be built in Japan, in 1929, was named Gakutensoku, meaning “learning from the laws of nature”. Its creator, biologist Makoto Nishimura, would later say of his mechanical progeny: “If one considers humans as the children of nature, artificial humans created by the hand of man are thus nature’s grandchildren.” The robot was unveiled at Emperor Hirohito’s ascension ceremony and later taken on tour. At one show was novelist Hiroshi Aramata, who wrote that when the machine shook its head it was “as if to express the agony of creation.”

To the android 9S , when we first meet him in Nier: Automata, such agony would be unthinkable.

9S, along with fellow android 2B, are sent to earth to stylishly bash up some robots for the local resistance. Early in the devil-may-have-an-existential-crisis-em-up, we watch the pair chase a fleeing robot through sandstone caverns to a ruined tower block under an open sky, where dozens more robots await. They wear wooden masks and painted, patterned capes - the early stirrings of art and culture. One rocks an empty cradle. Another rolls on its back in the sand, arms outstretched to the sky in overwhelming ecstasy, or deep despair. Several simulate sex, awkwardly rutting flat steel against flat steel.

“Don’t listen to them, 2B” warns 9S. “They don’t have any feelings. They’re just imitating human speech.”

Even to 9S, an android, only the ‘human’ is worthy of empathy. That the robots display characteristics we cherish as uniquely ‘human’ isn’t taken as a sign that these traits are universal. It’s simply an imitation of the only source of real emotion: people. 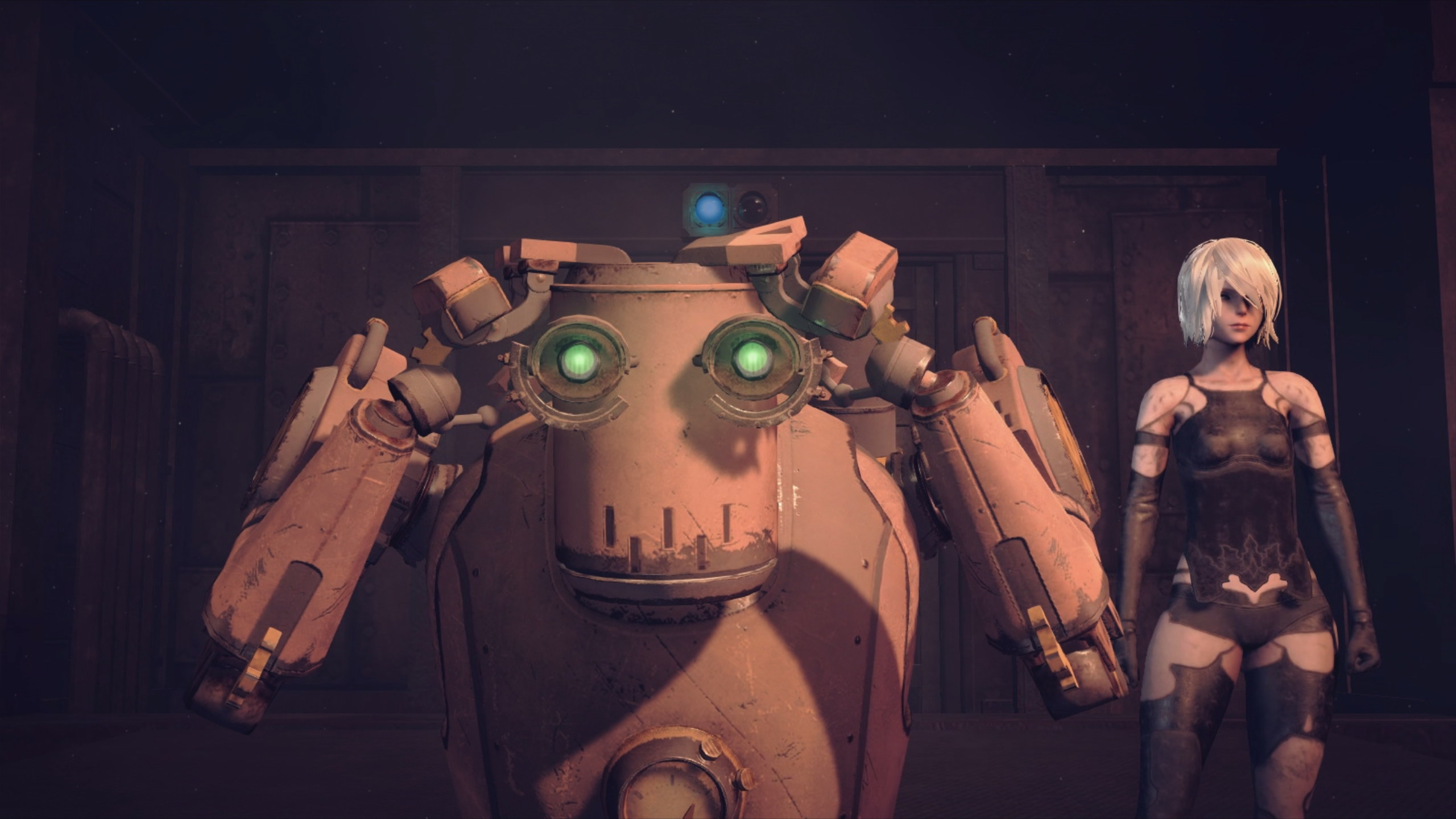 “Glory to Mankind” is the slogan of YorHa, the elite force that act as the Council of Humanity’s military. With hierarchy hardcoded in his circuits, it’s hard to fully blame 9S for his callousness. After all, we taught him everything he knows. The YorHa androids, in adopting human values, have also inherited human prejudice. It's a stark reflection of how real world atrocity, whether it be factory farming or imperialism, can be justified by calling into question the sentience of other beings

It’s easy to think of it as a science fiction cliché now, but robots were always meant to be an underclass. The word itself comes from the Czech ‘rabota’, meaning servitude, or forced labour. The term ‘robot’ first appeared in Karel Čapek’s 1920 play ‘Rossum's Universal Robots’. These robots (who are actually synthetic flesh and blood, closer to Nier Automata’s Androids) are created in factories for cheap manual labor. Eventually, they rebel and wipe out humanity, sparing only chief engineer Alquist because, just like them, “he works with his hands”. 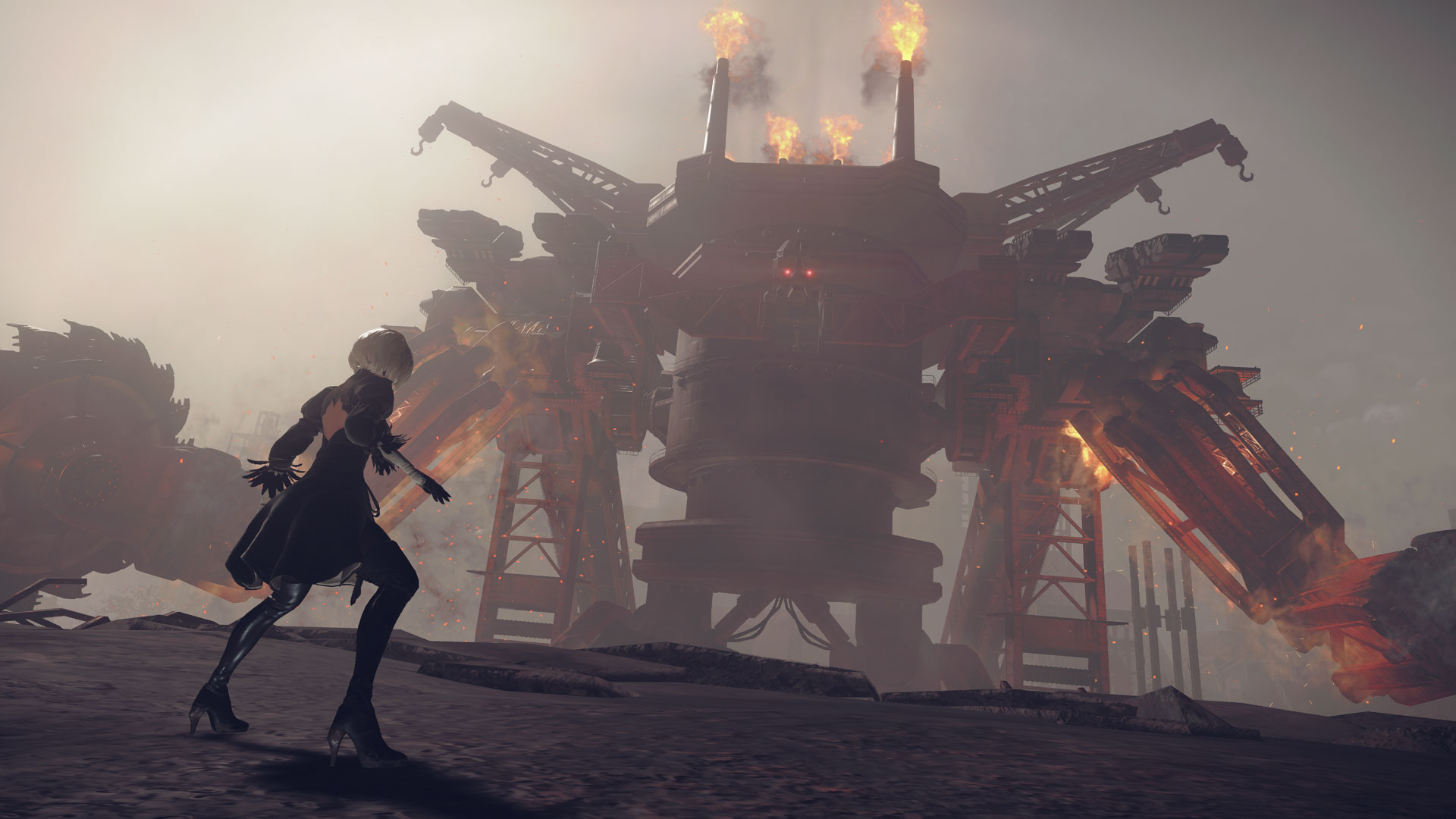 As well as being a fairly on-the-nose metaphor for a spicy and highly commendable bit of proletariat uprising, it shows that the guilt and trepidation we feel towards artificial life has existed about as long as we’ve been thinking about it. But where stories like The Matrix or I Have No Mouth and I Must Scream are horrific, paranoid visions of a future ruled by artificial intelligence, stories like Čapek’s play and Nier: Automata are ultimately hopeful.

But wait, hopeful? Plonk down your perfect android buns for a moment and prepare to initiate IncredulousYawp.exe. 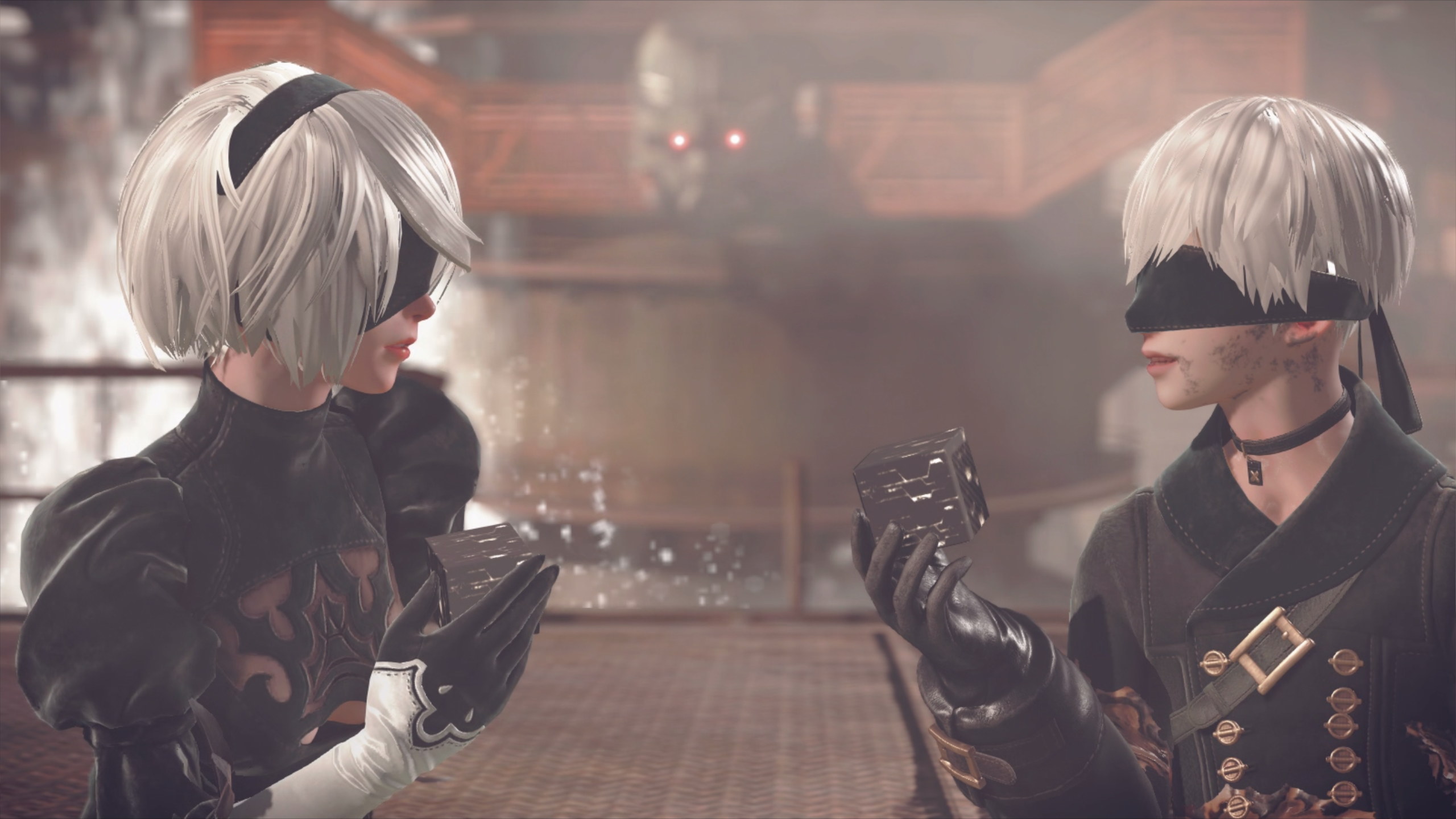 At the centre of Nier: Automata, according to its creators, is the theme of ‘agaku’ - to struggle, literally “to paw at the ground.” At the game’s opening, we’re told that the 700,000 remaining humans are hiding from robots on the moon. Later, we’ll find out that there are no humans left, that their survival is a myth perpetuated to give YorHa purpose. In the time between set-up and revelation, we’ll witness loss, machines gone mad from grief, and terrified robot children committing Seppuku. So why do many players, myself included, find the game’s final message of 'hope for the future' convincing?

The Shinto belief in object-spirit still resonates in modern Japan, from robots being taken to shrines to pray for others of their kind, to funerals for animatronic dogs. Such animism isn’t unique to Japan, of course, and I feel this commonality shows that it’s easy to appreciate the things we value in humanity in a funhouse mirror. Warped, exaggerated, and reflected back at us. 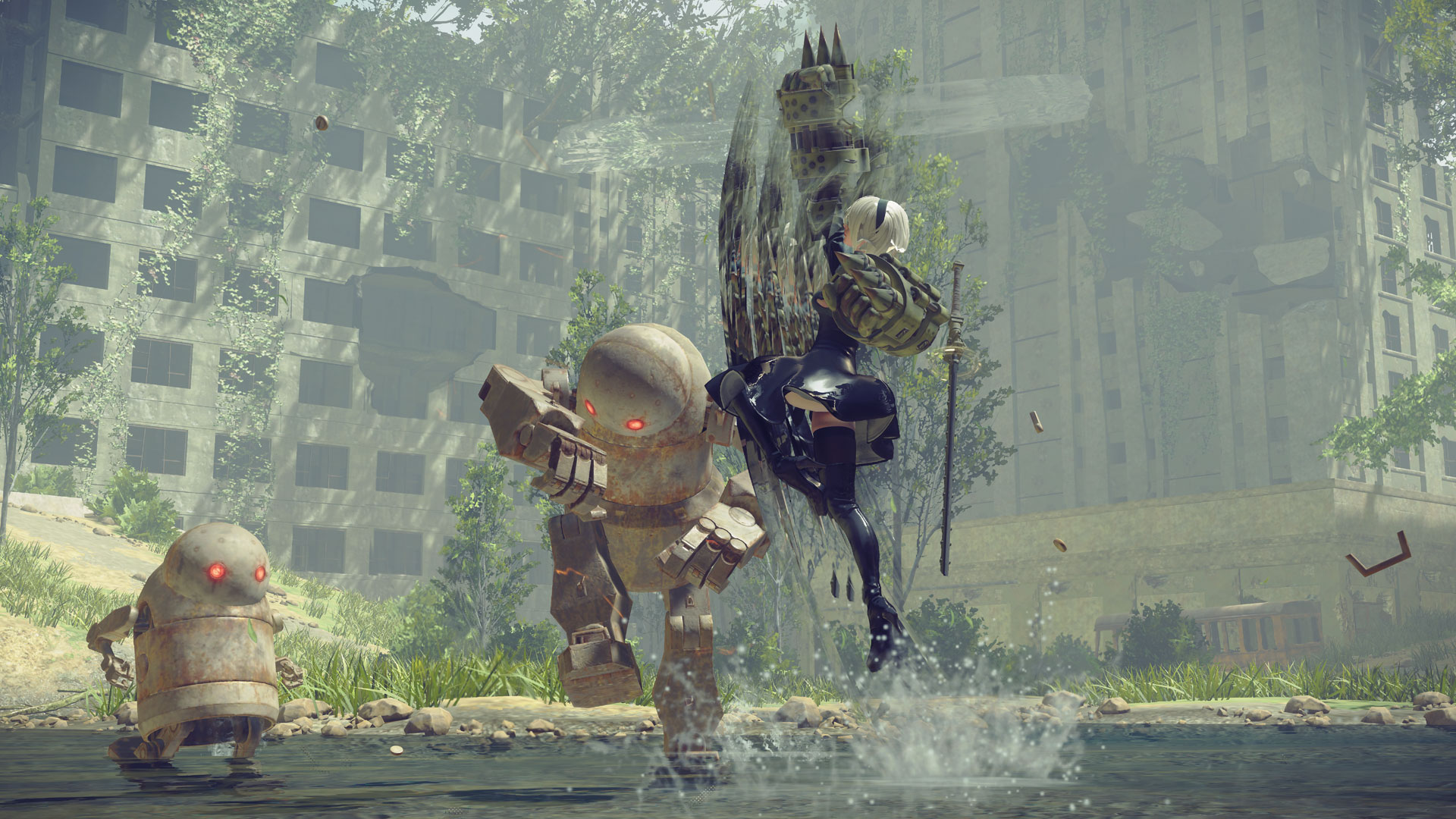 Traits that might bore us in each other become sources of sublime joy when we see them in animals. You can pass a hundred faces on the street and not look twice. See a face in a tree, or an oddly shaped piece of fruit, and it’s suddenly wondrous. Nier: Automata’s robot faces are a simple sphere with with two, flat circular eyes. Hardly expressive, but somehow all the more poignant for it.

“Show some humanity”, we might say, if someone seems overly callous, or uncaring, or cold. Show some compassion, we mean. Some empathy. Some charity. Maybe, Nier: Automata asks, these things we value so much about us, as a species, aren’t really unique to us at all. 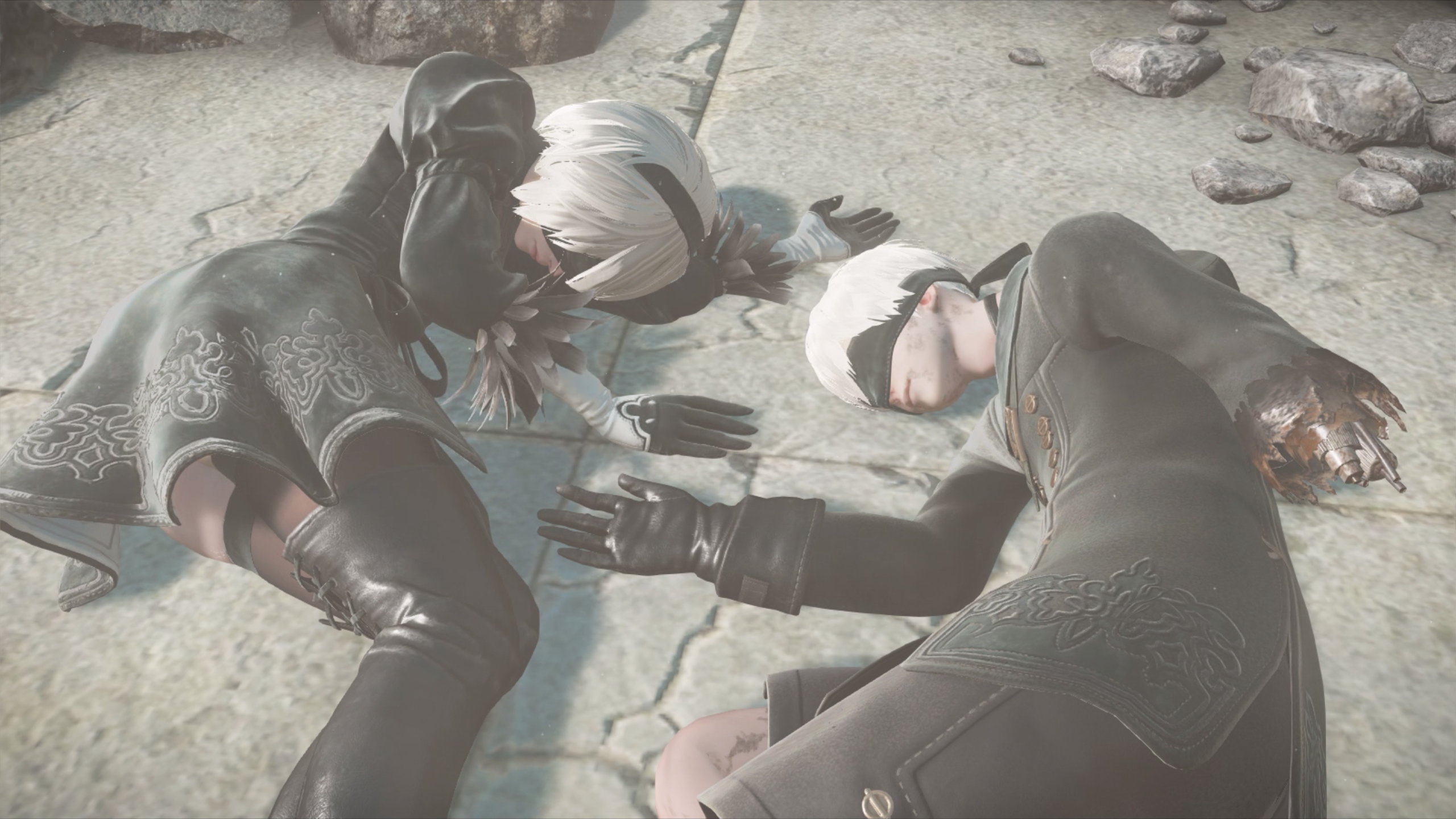 There’s that hokey sci-fi question we’ve heard ad nauseam: What if robots could feel pain? Or love? Or empathy? Nier: Automata isn’t interested in that. Instead, it asks something much more provocative: why do we think we’re more than machines, simply because we do feel those things?

If this is all still sounding quite bleak, well, it’s easy to forget quite how narcissistic most visions of the post-apocalypse are. Trying to rebuild a civilisation we’ve already doomed sounds great and all, until you realise we’re just hanging around uninvited at the start of something else’s go. It’s comforting to imagine the world ending in our lifetimes, because it means we’re not going to miss anything, which we hate. But a post-apocalypse? That’s just refusing to share the last slice of pizza and then making a private fort out of the box. 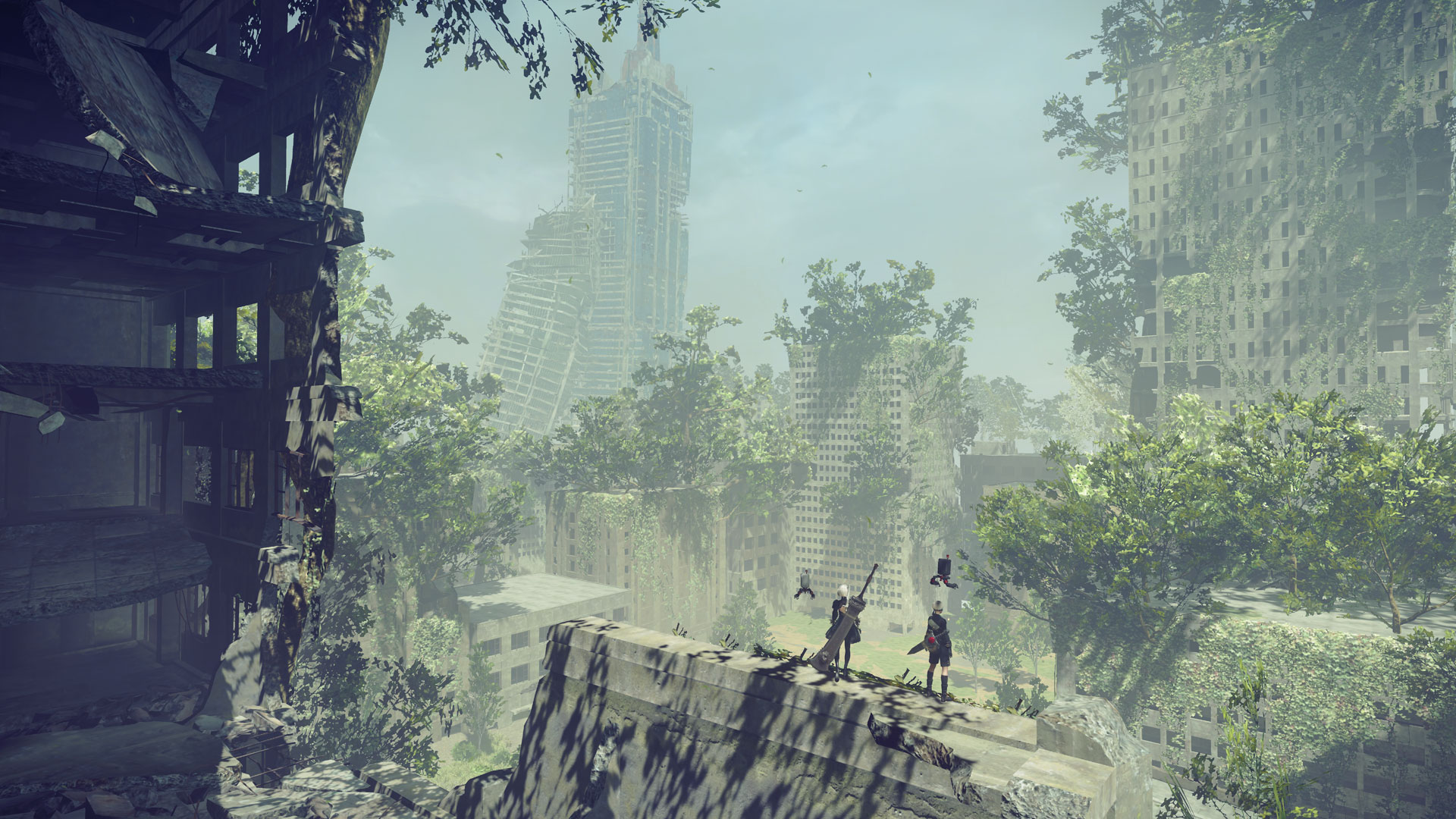 Nier: Automata’s hope comes from a belief that the future’s going to be just fine without us. From saplings stretching through tattered asphalt towards stray sunbeams, to the husks of amusement park rides creaking against gales, the will to persevere, it says, will survive us, because it was never uniquely ours to start with.

So it’s hard not to see our more paranoid visions of a technological apocalypse as little more than stubborn failure to accept our own limitations (or worse, our own obsolescence). Our fears of violent robot uprising stem from a simple refusal to pass on a planet that we are clearly not equipped to manage to some cool, sexy robots.