We've made it to day 15 of the RPS Advent Calendar, which can only mean one thing: time to do a bumslide right through that door and see what's behind it. 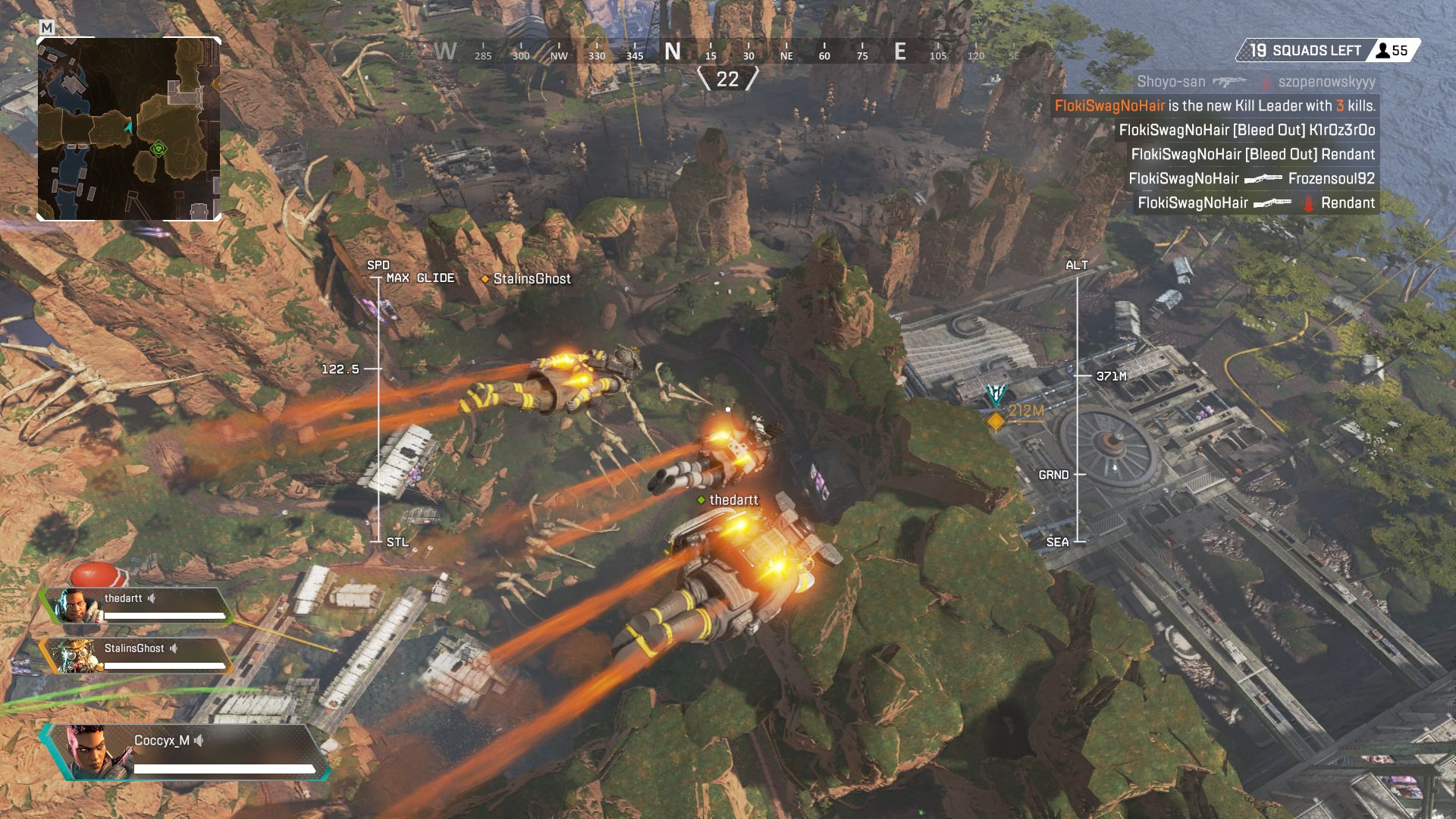 Matt: In my Apex Legends review, I declared Apelegs “the best battle royale game we’re going to see for a long, long time.” Such hubris shouldn’t have gone unpunished, but we’re ten months on and nothing has come close.

A lot of that has to do with the grappling hook robot. It’s not just about the raw thrill of mobility, and the way that hook transforms the world into a vertical playground. That's brill, but it's made better by exclusivity. Pathfinder is the only character that can look at the top of a cliff and think ‘I’ll have you’, then sail past and over it and into the midst of too many enemies. I have played for a hundred hours and I am still too brazen, but I am fast and I can fly.

My best moments haven’t been about murder, they’ve been about avoiding it. When my pals perish, Apelegs turns into a stealth game where my sole job is to survive, recover my friends' souls, and scarper to a respawn point. It lets me bask in the glow of a day I've saved, despite there being far too many kids who are far better at clicking heads than me. I rarely win fights, but I'm a dab hand at escaping them.

Apelegs raised the bar for battling royally, and then it added dragons. What more could one ask for?

Well, I ought to qualify that by admitting I've probably sunk ten times my total Apelegs play time into the battlegrounds of Mr. Unknown. Which means I can't hate it that much, can I? Well no, I suppose I don't. For a good chunk of 2018 it was the place where I stayed connected with a good friend, and it acted as a weird modern analogue for the long, rambling phonecalls of my teenage years. We would spend hours chatting while holed up in dilapidated Russian bathrooms, and only very occasionally would we stop shooting the breeze in order to shoot at distant strangers. More often than not, the only way anyone listening in would know we were playing a game at all would be the occasional barks of sudden alarm, as packs of balaclava-clad maniacs burst into our hiding places and murdered us in cold blood.

I tried playing without my mate a few times, and while something about the Battle Royale formula really appealed to me (the initial chaos, I think - I love huge, confusing battles with many different sides), the game itself felt as cold, inhospitable and joyless as a sunday evening in February. There was, in short, not much fun to be had, besides the brief, frenzied sadism of beasting a stranger with a crowbar out the back of a ruined barn. Maybe I would have liked it more if I had been better at it.

Then, as my Plunkbat phase was reaching an end, along came Apelegs. I'd just finished Titanfall 2, which had properly reinvigorated my love for a good, meaty single player FPS campaign, and so the idea of a Battle Royale game from the same developers seemed promising. Plus, hey, it was free to play, so I had nothing to lose. I didn't know anyone else who played at the time (probably the one reason it didn't stick with me as long as Plunkers), but even playing on my own, I had a grand old time.

Where Plunkbat was turgid, drab and rough around the edges, Apelegs was fast-paced, colourful and polished - and it never went too far, into the headache-inducing hyperactivity of Fortnite. Where Plunkbat was set in a series of dismal, collapsing generic Failed States, Apelegs was painted in Titanfall's bold science fiction hues, complete with giant alien elephant things walking around on the horizon. And where Plunkbat had zero element of character - at least beyond the occasional muffled, racist shouting of your assailants - Plunkbat borrowed from Overwatch with a fun, varied roster of space brawlers, and a pointedly diverse one at that. It was clear Respawn had hopes for a different sort of playerbase, and I appreciated that.

I was no better at it than I had been at Plunkbat, mind, and without anyone to play with I did end up drifting away when other games stole my attention. But it left a good enough taste in my mouth that I keep intending to come back, maybe this time with Matt to ferry my soul around when I inevitably die. I'm happy to see the game's doing well - while it gained the lion's share of its playerbase in its opening month, it has at least continued to grow, with around seventy million people currently apelegging at present. That's still barely a chimp's shin, compared with Fortnite's two hundred million dabbers, but it leaves me quietly hopeful that it'll still be going strong when I eventually find time to play again.