Matt and Nate have been playing Before We Leave, an aesthetically pleasing, non-violent citybuilder which nobody can seem to mention without also mentioning space whales. It's about little peglike people emerging onto the surface of a hexagon-covered sphere, after centuries living in a shelter underground. And it's also, inevitably, about gathering resources.

Nate: So apart from anything else, is it just me or is the music in this game way better than it needed to be?

Matt: This was the first thing I was going to mention! Especially the way it changes between your settlements. I enjoyed panning away from the jolly, industrious sound of my thriving first village, over to the barren wasteland of my second.

Nate: I bloody love the jaunty shanty that plays when you move the camera past a ship. It does a lot with atmosphere in general, doesn’t it? Very much a sort of wooden toytown feel to the whole thing, but with this Horizon-Zero-Dawn-Style post-post-apocalypse underneath it all. I love how the mashed old skyscrapers are just referred to as “mountains”.

Matt: Don’t mention Horizon, the people will expect dinosaurs. There are no dinosaurs. Or hostiles of any kind, from what we’ve played. You’re just gently tinkering away with potato fields and iron mines, while plugging at a simple tech-tree. 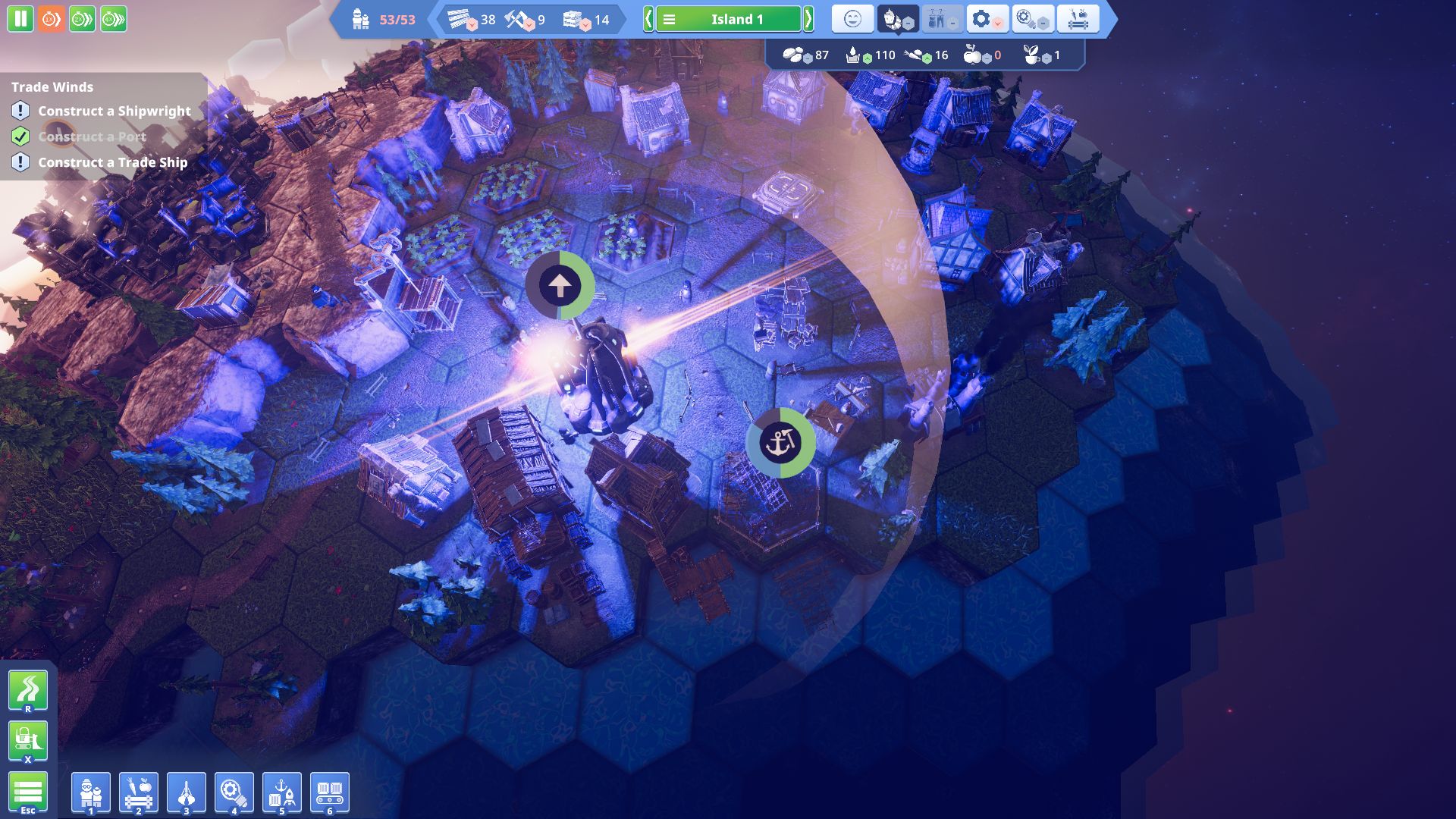 Nate: It’s mega low-stakes stuff, which I like. So far, I’ve not even really bothered to optimise placement of buildings and roads, because like, I’m not really trying to beat anything. So why put the effort in? I guess I like that and I don’t, at the same time. I certainly like BWL as a relaxation exercise, but I’m not sure if it wrinkles my ronalds fully as a citybuilder.

Matt: My ronalds are also unwrinkled for the moment, unfortunately. Before We Leave grabbed my attention with promises of space whales and interplanetary settlement chains, but it turns out you need to drum through several hours of very familiar city-wrangling. And I say that as someone who hardly ever wrangles cities.

Nate: Yes. I’m never one to huffily roar that something is too easy, but it’s so thoroughly unchallenging I reckon I could play it after sustaining a massive hammer wound from an aggravated Mitchell brother. But again, I am still in the earlyish game. Shall we reconvene in the morning and see whether our ronalds remain smooth then?

Matt: I might have built a spaceship by then. That’d be something.

Nate: Yeah - I do get the feeling this was sort of the game the Spore mid-game wanted to be, and the fact it’s played in little hexes on great big spherical maps does promise an expansion of scale soon. Let’s see if we can get troubled by some whales, eh?

The players exit to jaunty fiddle music; the day/night cycle rolls over IRL; the players return. 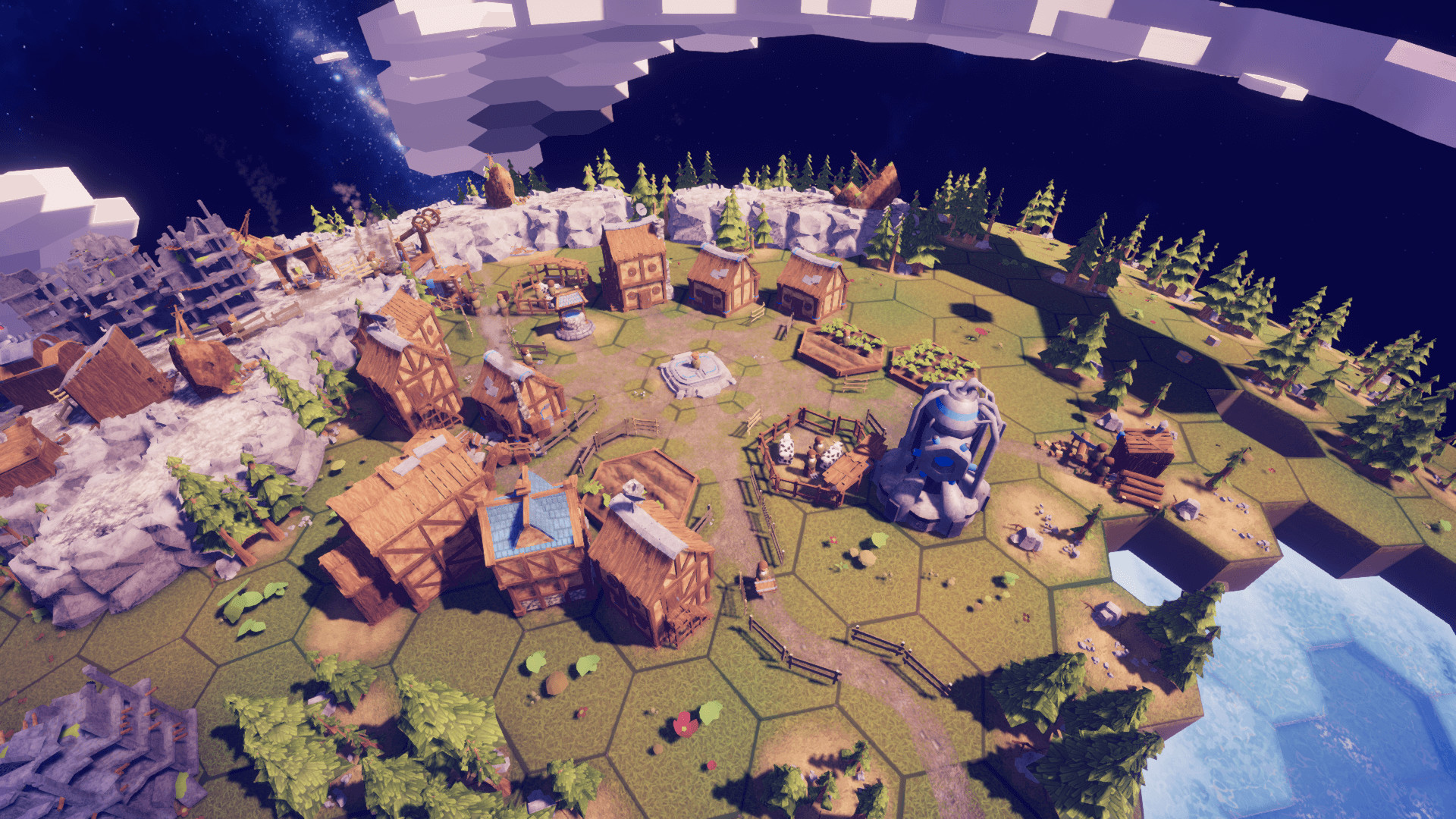 Nate: So Matt did you see a whale? I’m fixated on the idea.

Matt: Nope! There is a real paucity of space whales in this videogame about space whales.

Nate: Apparently they are there. But they take some getting to. I’ll say this, though, it does get more challenging. Or at least, I did start thinking about optimisation, once I had a multiple-continent civilisation, because people were starting to moan. Before We Leave is, however, resolutely hazard-free. I don’t think your little fellas can actually die, even?

Matt: I cocked things up to the point where nearly all the dudes on my third island were just squatting in their houses, refusing to go to work because they were too hungry. But there was no time pressure - I just had to wait until a few shipments of vegetables had arrived from my other villages. I’ve sort of realised that the appeal of these games lies in solving logistical problems, and that I get easily frustrated when attempting to solve even simple logistical problems. But I’ve also realised that once I persevere, in a game where none of my poor populace is properly going to starve, solving them can be very satisfying? I think I get it, Nate.

Nate: I’m proud of you, friend. It’s a good training wheel for citybuilding in general, but particularly the logisticky end of the genre. I keep feeling like this is what would happen if Factorio put all its stat points into charisma rather than intelligence, and that’s neither an insult nor a complement. 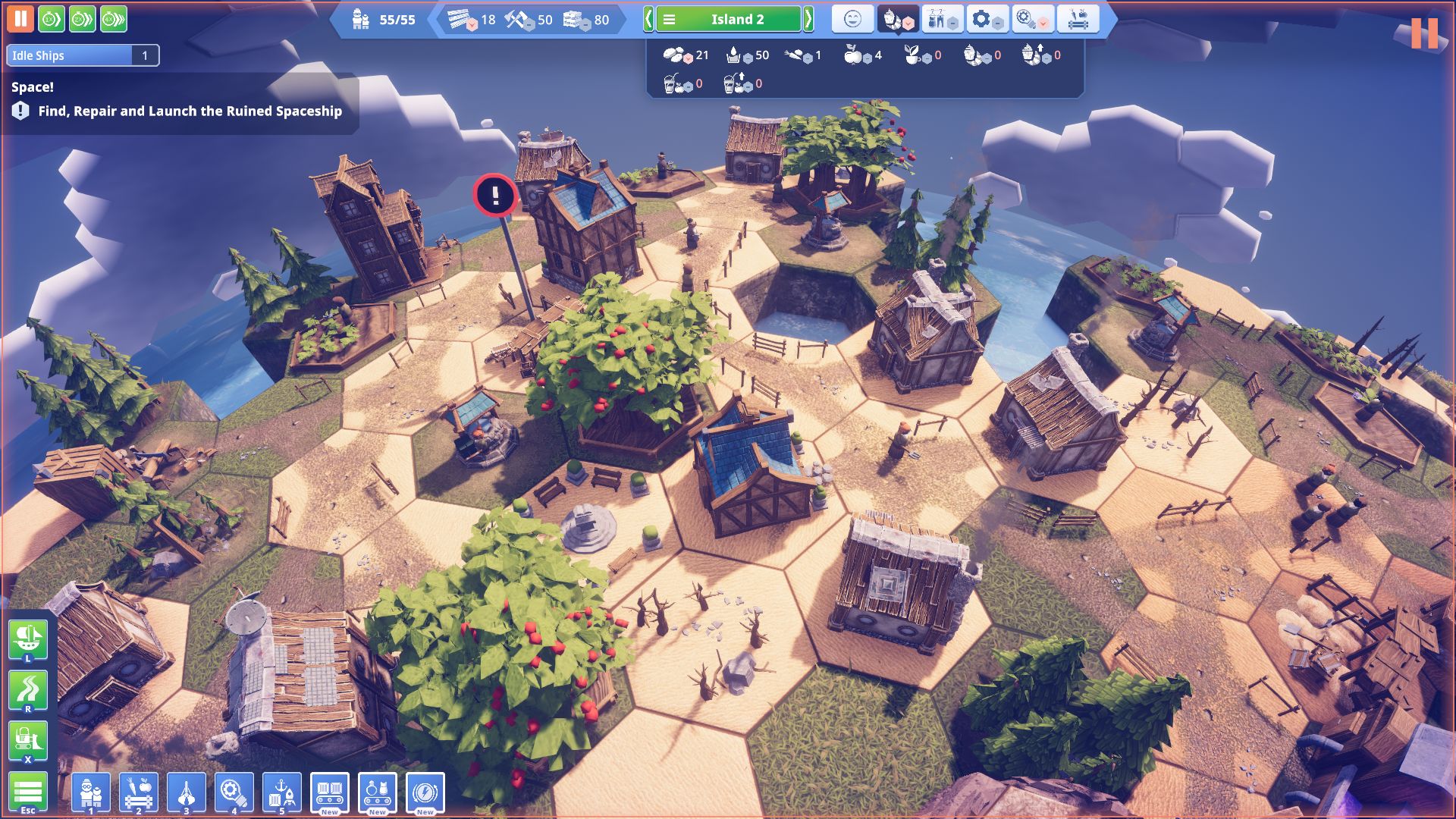 Matt: There’s a point where you’re told you’ve got to go find a spaceship, and that fixing it up is going to take “a lot of work”. I balked at that. I balked good, because fiddling with shipping routes and production chains and smoothie makers did indeed feel like work. That is, until I solved all those problems, landed on a new planet, and felt an urge to do it all again but better.

Nate: I did often find I’d anticipated every contingent step of the various resource-acquiring processes through intuition, early enough that it all became a bit rote to actually go through with, but that may be because I mainline games like this. It felt like when you’ve got a pretty good cabinet from Ikea, and you want to hurry the building part so you can jam it full of socks and that. No matter the terrain you land on, games play out fairly similarly in terms of build order.

Matt: I did think that. There isn’t much flexibility in what you can build and when - you’re chugging along a pre-planned route. Do other city-builders do that better?

Nate: To an extent. Rimworld, for example, is mega situational, and Oxygen Not Included certainly can play out differently depending on what you find.

Matt: Wait, those are citybuilders? In my head they’re… fiddly simulation puzzle boxes. Maybe that is what a city is.

Nate: Make u think. Technically they’re colony builders I guess, but it’s a blurry line between the two. 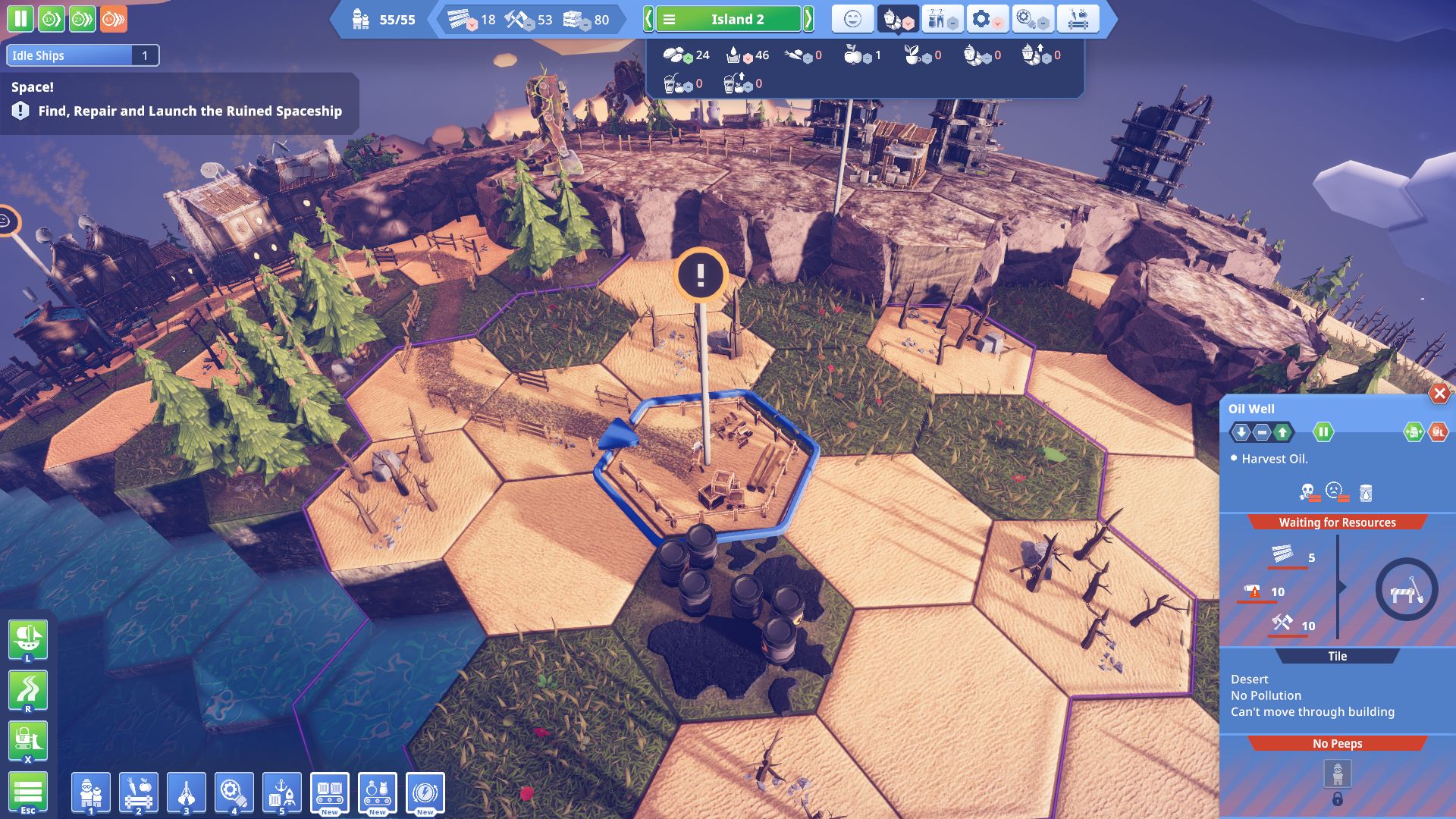 Nate: Actually, interestingly enough, the game this reminded me of on the other end of things from Factorio is Frostpunk. Admittedly the moods of the two could not be further apart, but both are games with pretty much one route through them. It’s just that Frostpunk beats you to death with a block of frozen child blood if you step off that path, while this just clucks at you with faint impatience.

Matt: Hah. See, this is where my whole “oh no, what’s a citybuilder” facade comes crumbling down, because I’ve played and enjoyed Frostpunk. That lured me in with the promise of making brutal decisions about whether or not to allow people to feast on their own children, but I wound up sticking around for the logistics.

Nate: It’s a digression, but I do think “citybuilder” is a messy genre definition. To me, there are games about building complex, self-maintaining systems from tiny starting points, and then there are games about other things which happen to involve plopping down buildings, and they get lumped awkwardly together. I’d say this is slap bang in the former territory, and that’s a good thing. Hey, why do you reckon it’s called what it is? 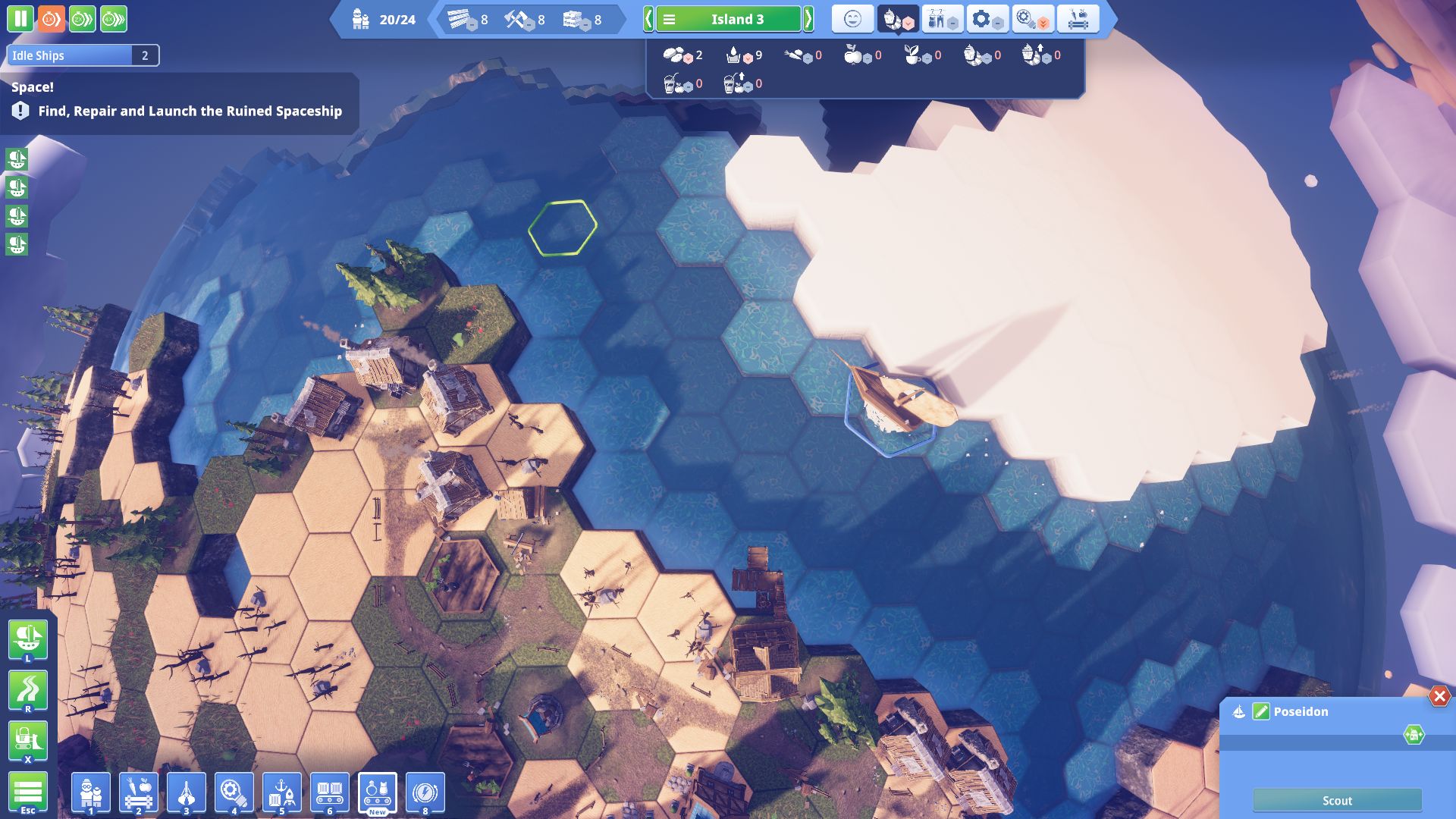 Matt: Hang on, I actually asked the lead developer this about ten months ago. I told him “Before We Leave” made me think about what these people might be trying to accomplish, before they head off to the stars. He didn’t really have a good answer: he gestured towards the lore and that, and the mysterious forces that made those people go underground in the first place. But really, all you’re doing before you leave is gathering up resources so you can go and land on another planet so you can gather up resources. Then again, he did tell me a great story about an inflatable whale hat he saw at a carnival.

Nate: And there we have it, folks: space whales. I’m gonna call this a moderate recommend, in conclusion. It’s beautiful, good-hearted, and has some fine ant farm energy when it’s really going for it. Even so, I’d flag it more for curious builders than compulsive settlement-’em-uppers.

Matt: God, we really didn’t spend enough time stressing how pretty it is, did we? 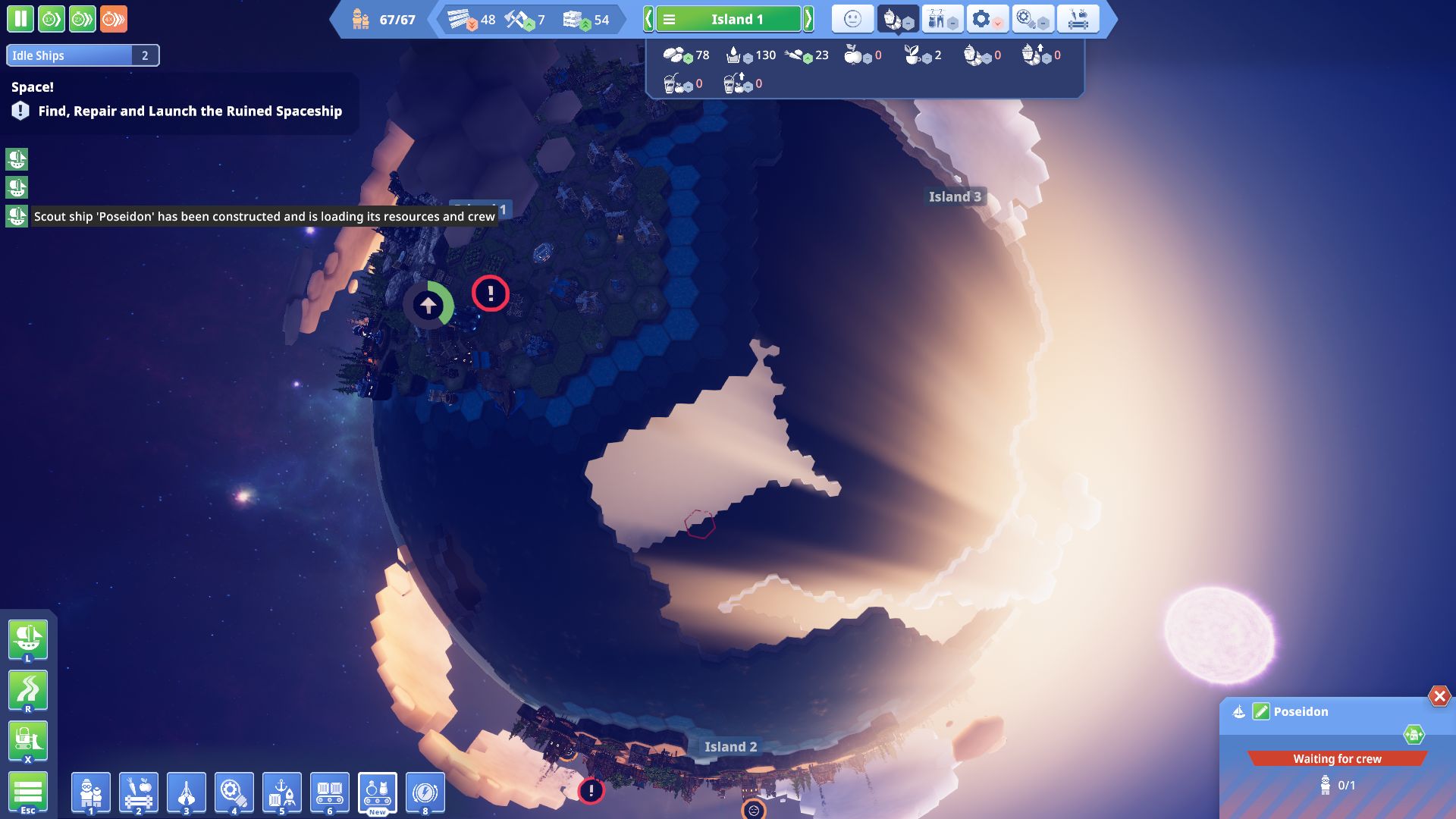 Nate: No, we didn’t! So many citybuilders - particularly the early access/lone developer legion - look really samey and drab, so it was a pleasure to see something so visually special. That moment when you’re exploring the sea and you see parts of the world curling round a big invisible void like orange peel is mega.

Matt: Yeah, that’s the stuff. And I do plan on playing until I spot a whale. If you’re like me, and only go for citybuilders when they’ve got a special hook… you might like this even though the whales are all buried in the backend.