If you click on a link and make a purchase we may receive a small commission. Read our editorial policy.
Developer: Deck13
Publisher: Focus Home Interactive

Ten hours into The Surge 2 I was still finding new shortcuts back to the cybernetic medical bay I called home. This to me is what makes a good Soulslike. I'm now 30 hours deep and have uncovered tons of unlockable gates, hidden paths, magnetic lifts, and zoomy zipwires, all criss-crossing one another like the pastry pattern on a nice, hot pie. The desolated sci-fi city of this third-person action RPG is a twisting urban gut, and you are an undigested bean. But it's not just that. Between heaving open jammed elevator doors, the limb-lopping combat sees you collecting pieces of fashionable uber-armour by slicing them from your enemies' bodies, gathering arms and legs as if they were Pokémon. Please ignore the blood on my face, I'm having a great time.

If you missed The Surge, it was a better-than-average Souls-o-jaunt through a corporate factory with lots of neat shortcuts and a few annoying problems. It was not bad. In this sequel the robot apocalypse has spilled out into a nearby city. You are a fighty person who wakes up in the medical ward of a prison. You're soon up and slicing off a scavenger's leg to get their shiny knee pads. 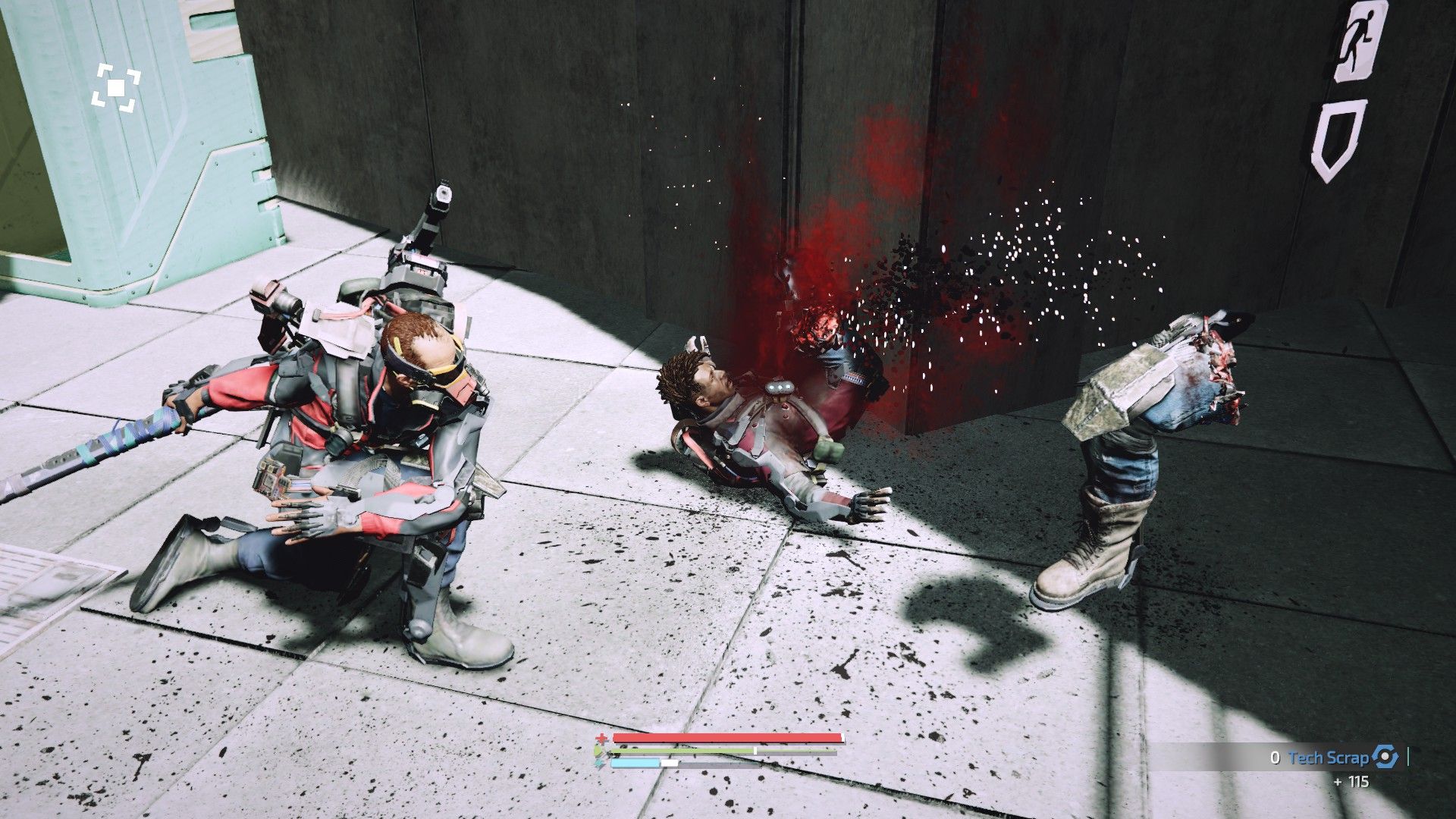 In true Souls style I despaired at my first two deaths at the hands of an overzealous police officer, but the third time we fought the art of counter-attacking clicked. This is a new element of combat. You can now parry attacks with quick directional blocking. It requires good timing to get right, but anyone who has parried a viking's mega-axe in Ubisoft's anachronistic brawler For Honor will find it familiar.

This improves the combat a lot, I feel, adding an extra dash of panic and flair to every duel. But it is hard to get down. Thankfully, you get an implant that gives you directional warnings (big arrows to say: attack coming left!) and I have never unplugged this. Blocking in the first Surge was pointless (your dodge was always better). Here, parrying feels nigh-essential. The first proper boss, a starfish-pooping robot tripod, demanded downright perfect parrying, as did later bosses. 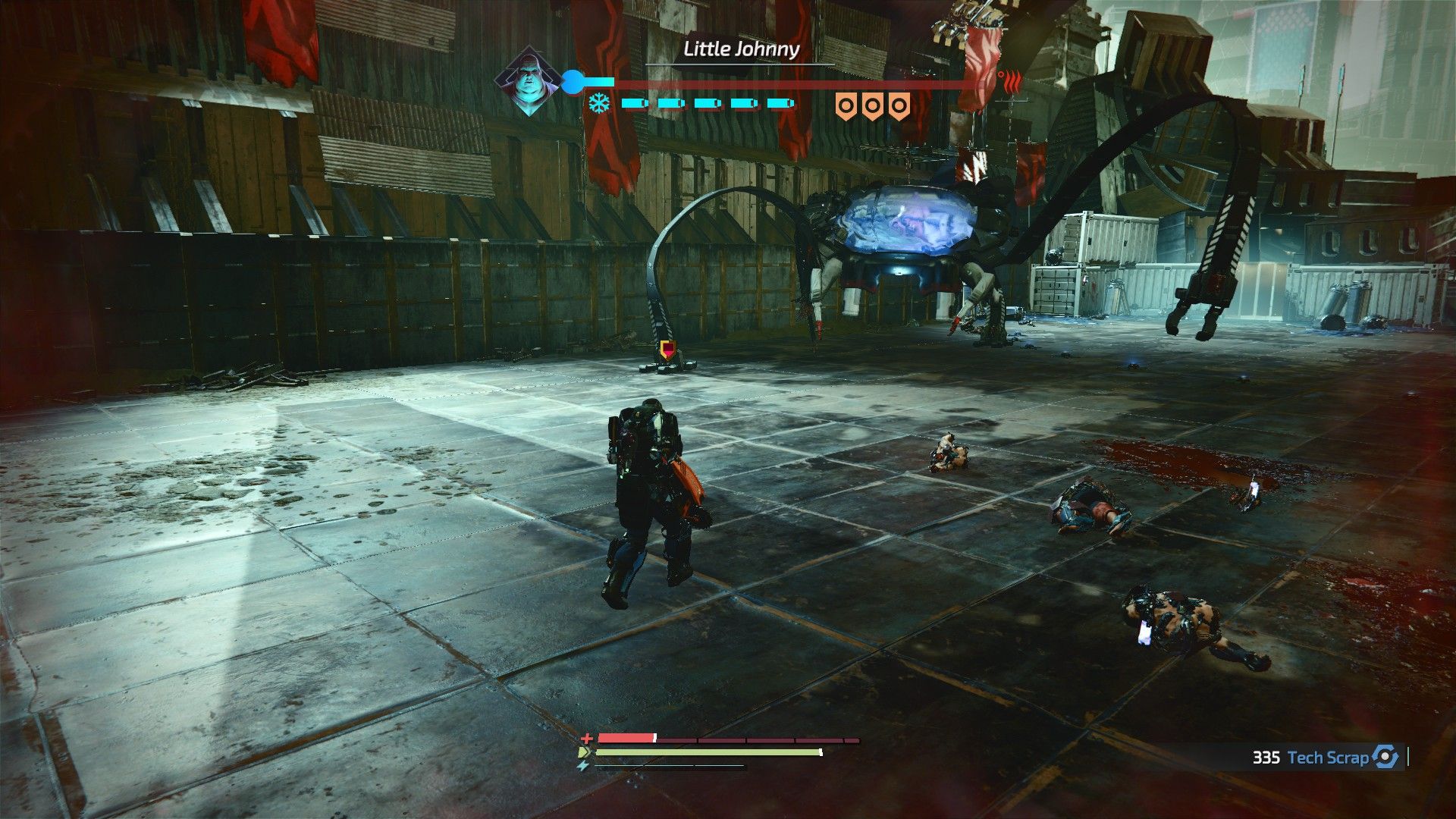 The fighting in general has a far better rhythm to it than in the first game. I'm still a bit frustrated by overly dancelike moves (one button press does not always equal one strike) and the attack styles vary so much between weapons it's hard to get a feel for your new bash-o-drill without risking a death or two. A staff might do speedy, twirly swings. Twin arm-scythes, a flippy triple slice. But I have settled on a pleasantly cumbersome giganto-hammer, which I use to thwack torsos off hips like I'm driving a golf ball off the tee.

It's still a toughie. An early bit in the docks saw me dying ten times to the furious buzzsaw hands of a cyberpunk dope fiend, completely unable to rely on my usual parry tactics. But a trip back to the medical table (these are your checkpoints and upgrade stations) saw me vomiting tech scrap into the upgrade menus. Tech scrap is the not-souls currency here, which lets you build new bits of armour from the schematics earned from amputations. I returned to the cyberjunkie as a lumbering bomb defusal geezer with my mighty hammer, and finally managed to get through this section with a sliver of health before - ah! - the next thirst-quenching shortcut. 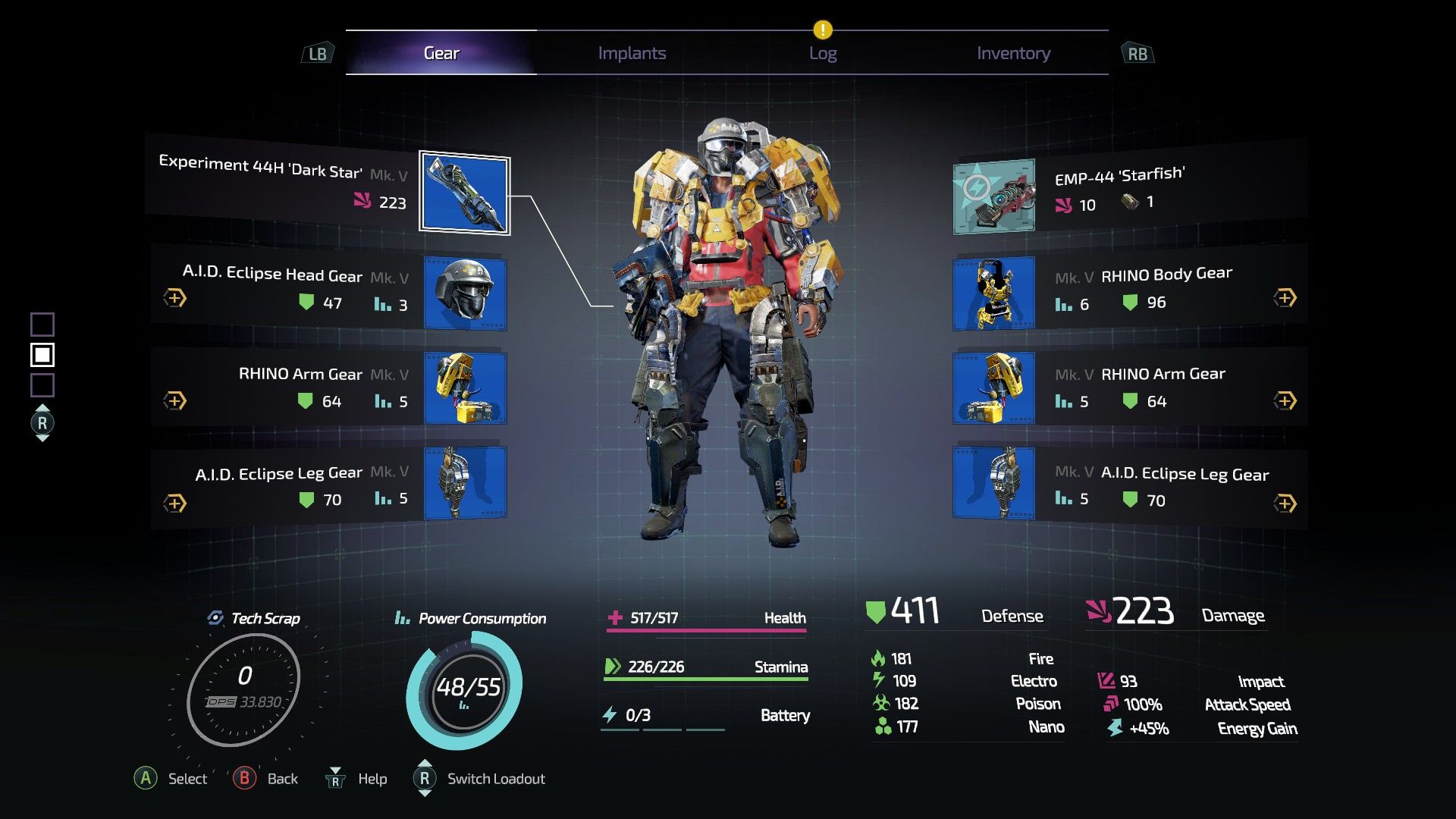 That process of building your armoured murderman is very pleasing. There are a bunch of armour sets to strip from foes, and you can mix 'n' match body parts to activate bonuses. For example, if I wear the boots and helmet of these security guards, and the breastplate and gauntlets from this human forklift-man, I can smack everything with extra "impact" damage. It's the morbid satisfaction of tearing all the limbs off your action figures and clicking bits of them together to make your own Frankenstein's monster of a robo-fella.

There are also bonus-granting implants. They might up your defence when you charge an attack, or increase damage when you parry. I jacked in some of these and created a Thor-like stomp-o-killer who specialises in parrying attacks to deliver monstrous counter-blows. I've been rocking this wonderful meathead for a third of my playtime so far. He's a beast and I love him.

Your drone, which I barely used at all in the first Surge, is actually useful this time, although the basic shooty version has a habit of turning itself off after only a few seconds. I have some electronic kitchen scales in my house which go to sleep after 30 seconds of inactivity and I find this gun drone's narcoleptic habits equally annoying. Much better is the "magnetic starfish" drone you get later. It fires a sticky bomb that paralyses your enemy with an electroblast. It's also used to open special doorways and unlock magnetic lifts to new (or recognisable) places, doubling up as a Metroidvania style skill that gets you into that sealed door you spotted 30 minutes ago.

As for your motives for heading through that door, The Surge 2 doesn't inspire with its storytelling. It's full of worldbuildy chatter, close to the point of being a Souls parody. And the tale is rote - a bad cyberdisease, a city in ruins, a mysterious wee girl with superpowers. The game works best when it catches the reflection of its own writing in the mirror and pulls a wacky face. The gossip-loving vending machine who buys all the audio logs you find. The dodgy doctor who claims he swears the Hippocratic oath "every morning before breakfast" as an occupied body bag lies nearby. The upbeat tourism recording that encourages you to "talk to one of our friendly citizens" as a crazed scavenger with knives for hands lunges at you from behind a burned-out car. 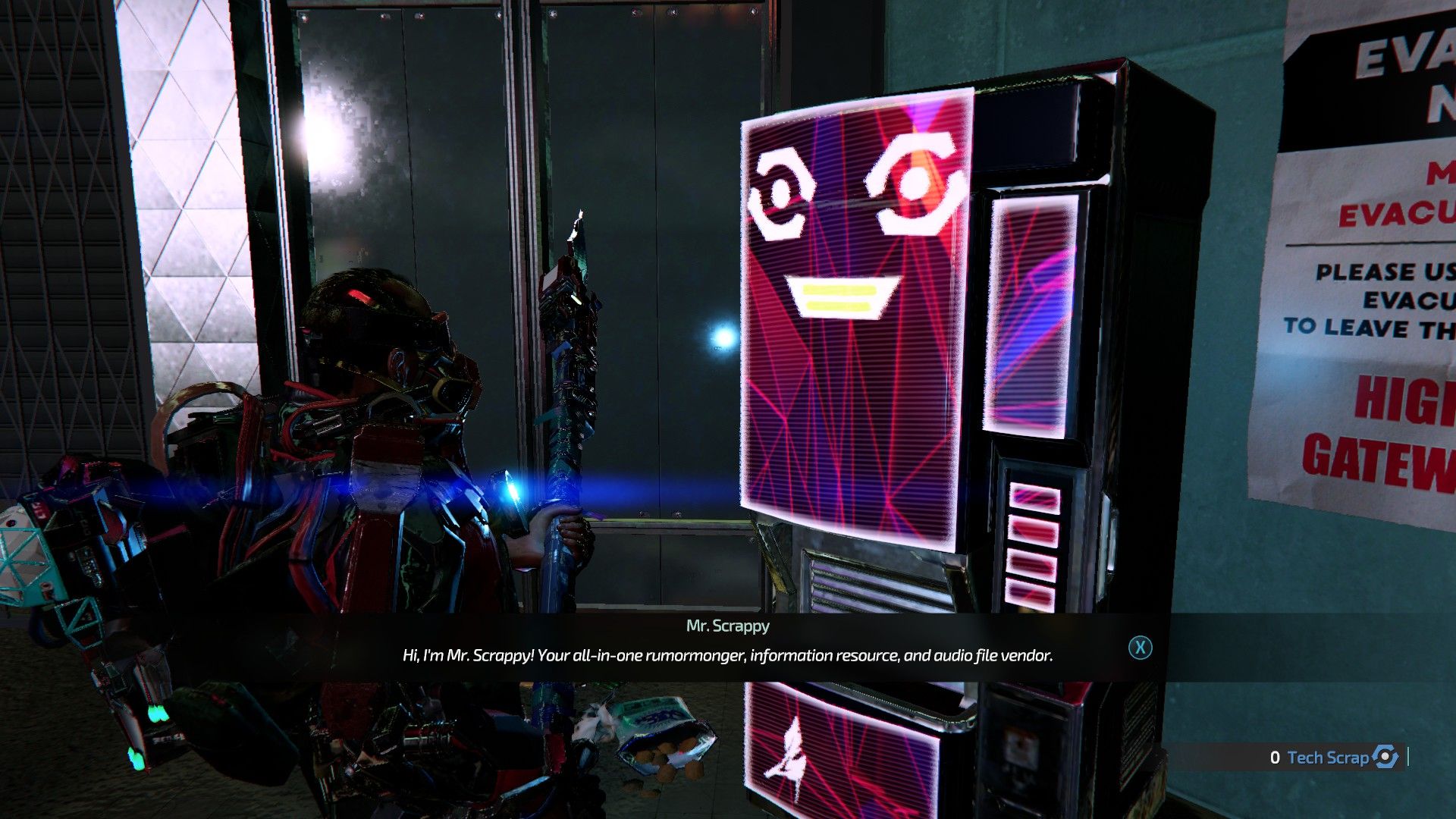 But the story is really an excuse to visit the city, which is far more vibrant and trashy than the clinical tech labs and industrial hallways of the first game. I'm thoroughly enjoying mapping this wrecked downtown in my head, with its alleyways and passages and balconies that lead inevitably back to familiar ground. There are districts split off from the city centre (complete with loading screens) but even these parks and ports have their own winding geography. It took about 25 hours before a pop-up tutorial mentioned the filthy phrase "fast travel" and even this involves a tubular system of man-sized pipes that have to be unlocked one by one. The convenience of magic pipes comes about only after the canal pathways and metro tunnels have been woven together by clever pathways. This is how grand Soulsy level design ought to be done. It's fantastic. 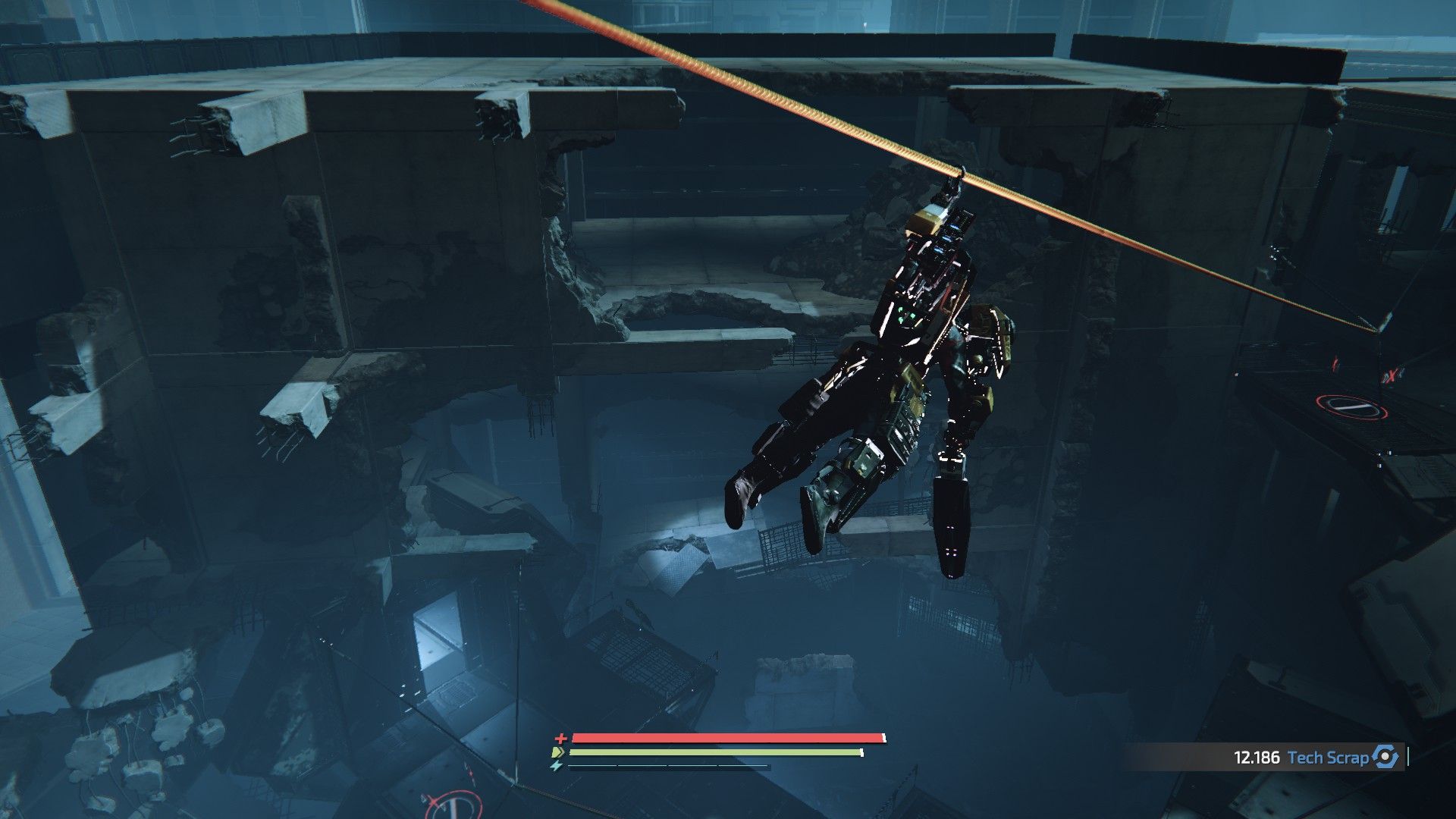 But lots of tight corridors mean some camera problems. There are instances when jagged metal and mid-room pillars block your view. And the lock-on camera has its own quirks. For fast-moving bosses the camera arcs everywhere, sometimes struggling to keep up with the threat. Anyone who battled this infuriating garbage crusher of a boss in the first Surge will feel a pang of familiar irritation here. If you are near a wall when fighting a bossy brute, your view often becomes a mess of body parts and particle effects. I hate when this boxed-in camerajank happens in Sekiro, and I hate it here too.

I also had some graphical glitches, including one moment in which an entire dance club became a little too psychedelic when all the floors and walls disappeared. I had to bust the graphics preset down to medium just to get everything to run on a GeForce GTX 1060 without stuttering like a cartoon racecar. So either I need a new graphics card, or the game has a few tech problems. I'll guess we'll find out when the cacophonous chamber of Steam reviews has spoken. 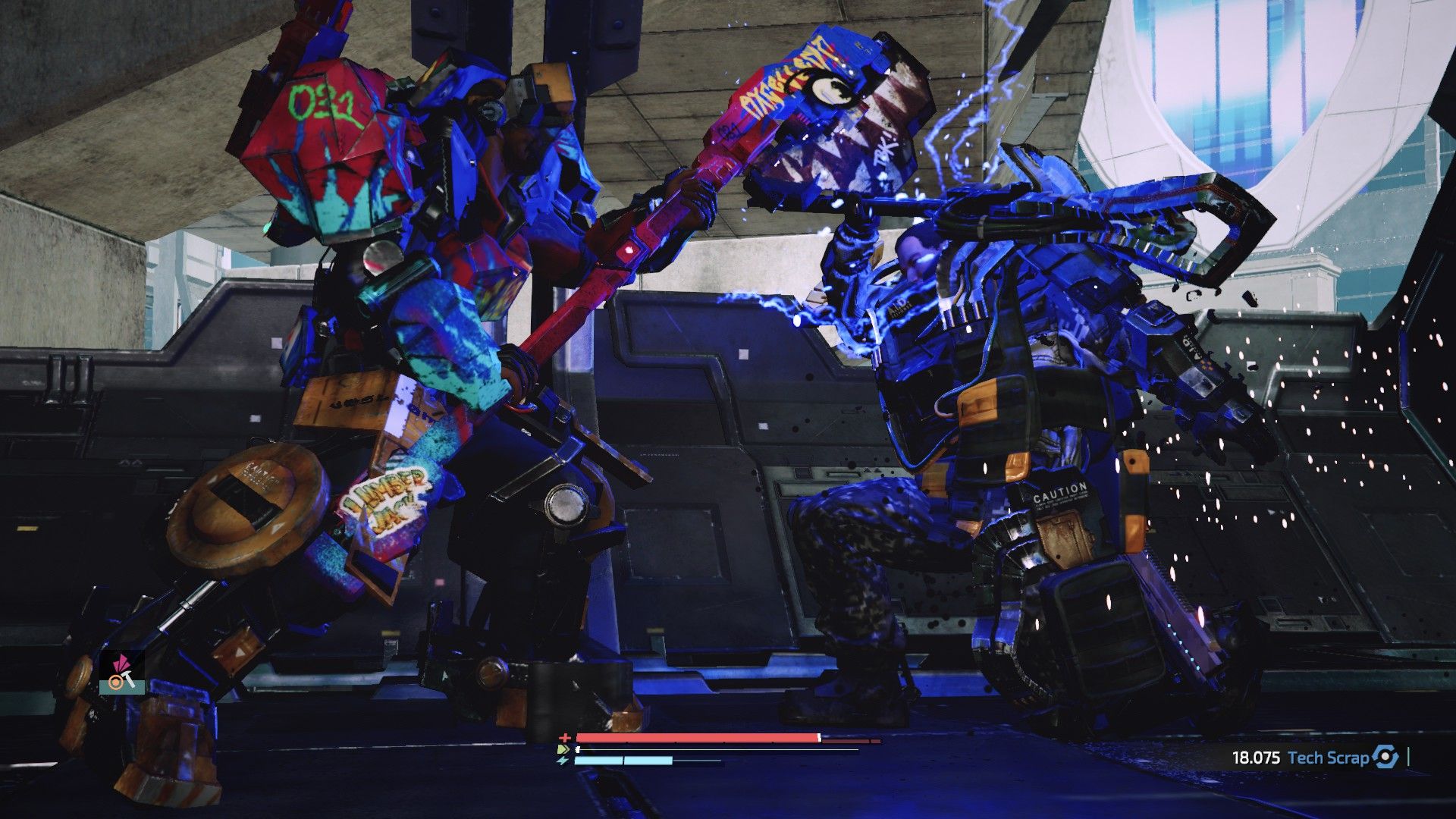 I never completed the first Surge - it lost momentum. But I admired its shortcutty chutzpah. Here that brain-tickling mental mapping has been amped up greatly, so I feel determined to see it through. The curse of the Soulslike is to invite and repel at the same time. To buck like a chicken mocking you, while hiding a vicious rhino-guy behind a big cardboard box. Whether or not I finish this type of game often depends on how finely it delivers those encouraging taunts. The Surge 2 swings between harsh bosses and tough-but-pleasing exploration. The camera is sometimes a hassle and the storytelling leaves me only vaguely interested in its characters. But them shortcuts!

There are a lot of other things I like. The spray painting drone that lets you leave symbolic messages for other in-Surgents. The panicked min-maxing of implants to give yourself an edge in boss fights. It improves on the first game in every way. And a late game event has me exploring that smouldering downtown in a fresh way after almost 30 hours. Having larked about in Sekiro's mytho-Japan earlier this year, the bar set by FromSoft is still higher than a tall dragon. The Surge 2 doesn't leap over that bar, but it does find a really cool secret passageway beneath it. 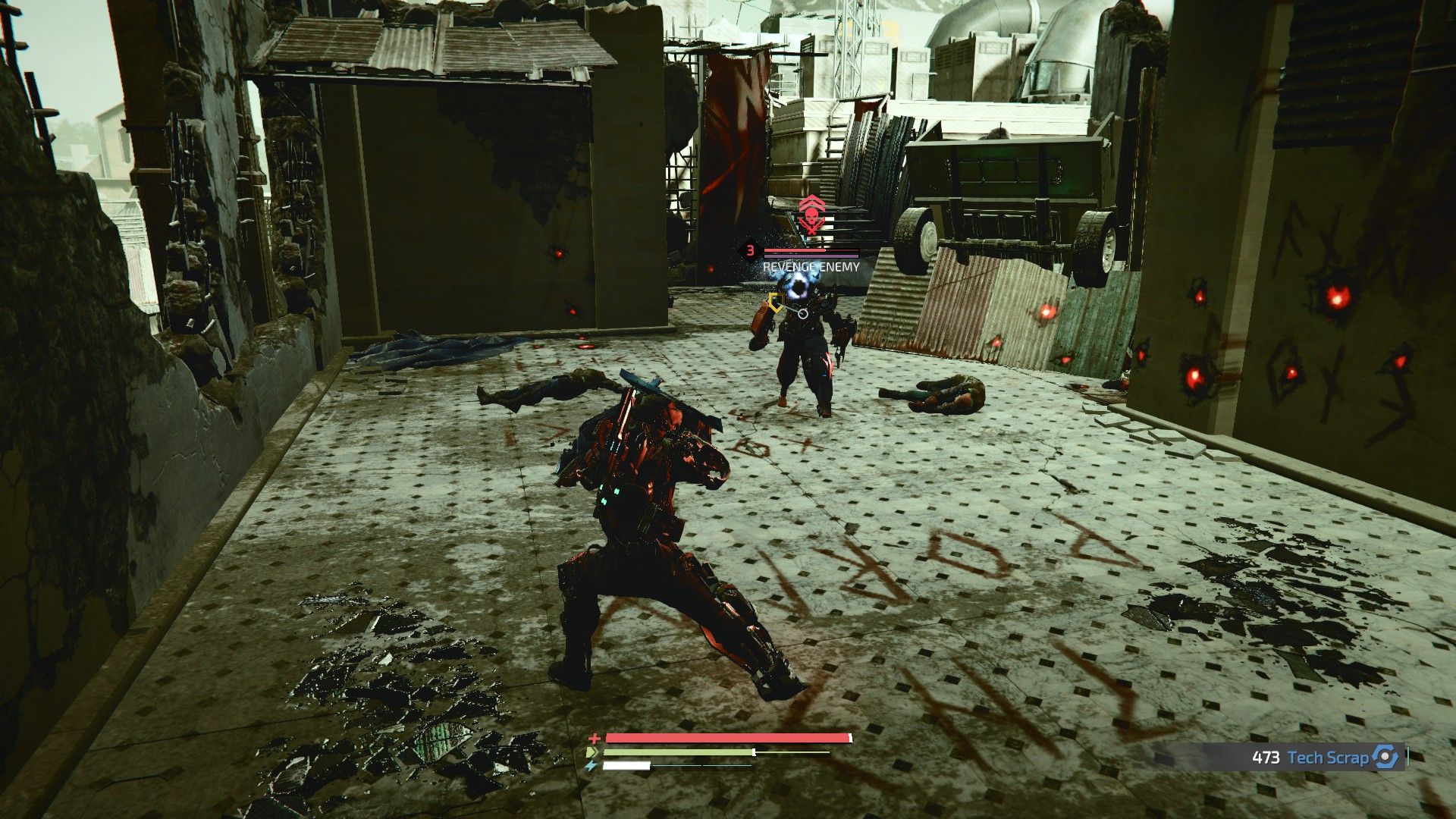 It's that rejection of fast travel and a devotion to twisting paths that makes this one of the purest devotees of an old Souls philosophy. The carefree amputation of half the city's populace is keeping my fingers and thumbs entertained, sure, but the shortcuts and secrets are keeping my brain occupied, especially in the later parts. If you missed the first Surge, but always meant to take a look, hop into this one instead. Think of it as a shortcut to a better game.