The Swords Of Ditto has perhaps 378 good ideas in it. That's over 80% more good ideas than most games. My problem on approaching this review is trying to work out whether I think a barrage of good ideas is necessarily a good overall game.

In Swords Of Ditto, rather brilliantly, you lose pretty much as soon as you begin. Waking on a beach, your character is greeted by Puku, a magical floating dung beetle, who informs him or her (characters are randomly assigned sex, race, even species) that they are to be The Sword. A chosen one who must prevent the reign of an evil witch, Mormo, from destroying the land. Should she survive, the world will be under her tyrannical reign for one hundred years, until the next Sword is chosen. So the stakes are high. Which makes it quite a shame for everyone when Mormo murders you moments into the story.

One hundred years pass, and a new character wakes up in their bed (and from here on, always a bed) and is once more greeted by Puku. The land is now ravaged by monsters, gone a bit purple, and once more you have the chance to end Mormo and prevent another century of terror. Except this time you need to hit an awful lot of baddy variants with your sword, and an ever-growing collection of "toys", while arming yourself with ability-boosting stickers, and spending a really quite extraordinary amount of time hacking at grass and bushes to retrieve money and food.

Along the way you gain XP, level up to get stronger, and try to solve quests in the randomly generated version of the world for this lifetime. Each time you re-enter one of the large sections of your current map it refills with enemies - a vital resource for gathering their loot and gaining the level you need to enter dungeons. Puku tasks you with finding specific toys, then using their abilities in a further dungeon to remove one of Mormo's anchors, which will weaken her in the final battle. That will happen four in-game days later whether you like it or not.

Oh, and should you die at any point, at any moment, that's it. All that character's progress blown, and it jumps to one hundred years later, with another Sword required to start the process over. How much they inherit from the last Sword depends on what progress was made, what bonuses were bought, what was bequeathed.

You can see the ideas piling up. And so many are so great. Enemy types are so many and so varied, each requiring different approaches to your rolling about, sword-swiping, and ranged attacks. The randomly generated locations feel fresh each time, and it'll take many, many hours before you'll start seeing the joins. And this generation extends to dungeons, which if they're not procedurally generating their puzzles, then have the most astoundingly huge range of room tiles to choose from. Infinite Zelda.

The four day limit is interesting too, because it means you have to decide how to spend your limited time, knowing that - early on at least - you're just not going to have the resources or ability to take down Mormo by the end. Do you work on gathering money and, later, celestial tokens, which are inherited by the next Sword? Do you blow your cash on extra toys and stickers to try to make a dent and give yourself a chance at completing? Do you just explore around at random for a lifetime, because you're interested to see what other surprises lie in the map's outer reaches?

And of course, as you're tipped off about right from the start, the time limit is something that can - eventually - be extended. Through processes that would be a spoiler to explain, you can work out ways to change that, influence it. Costly ways, that again determine how you approach this particular lifetime.

Then there's the brilliant quick travel system, the hilarious boss enemies, the squillions of secrets, and perhaps most importantly, the really quite exquisite lack of hand-holding when it comes to learning the game's many systems I've not mentioned here. 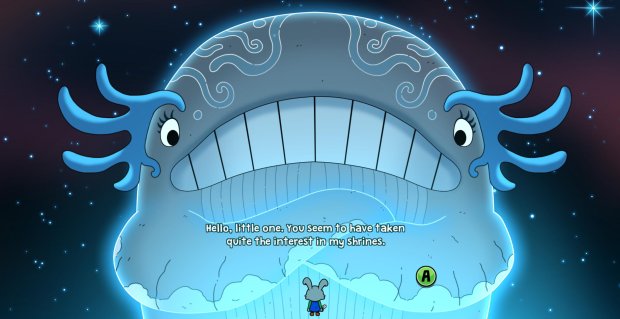 All of that sounds like a brilliant game to me. But what I've experienced falls shy of brilliant. Fun, undoubtedly, and certainly compelling to keep plugging away at, all beautifully displayed in lovely cartoon graphics, with lovely smart-ass dialogue. A game I've definitely enjoyed a lot. But enough frustrations exist that the coming together of all those good ideas just doesn't quite feel complete to me.

The strangest of these issues is how it takes too long to establish a meaningful way to pass on items to later generations. It was such that for the longest time I was mystified why it was a rogue-lite at all. It feels, for so long, far too much like it could have just removed the time limits, and let you play the game as a straight, short Zelda-like RPG. Once you can inherit items, and extend lives, all that makes much more sense, but that's hours into the game, and potentially even more if you don't realise the importance of the celestial bars early on. Gosh it would have been a much more satisfying game if it set you up to meaningfully pass on your progress to the next Sword from early on, letting you approach the game far more tactically from the start.

There's also an odd issue with how it approaches the final challenge. The game forces you into that final encounter after its four day limits (six if you play on the far too easy easy mode), so it feels really odd that for the longest time, you're simply not going to be able to win it. Multiple floors, packed with enemies that - near the start - will hugely out-level you, when you won't have the equipment or food or skills needed to get through. Get a few generations in and this is a different matter, but it's still a pretty odd notion I never quite got to grips with.

And on top of these more thematic concerns are some peculiar mistakes...

For instance, on starting yet again one hundred years later, there seems to be no understanding that a player is already really pissed off about the previous failure, and just wants to get on with things straight away. Death can come during the final battle with Mormo, perhaps ONE FLOOR FROM THE FINAL ENCOUNTER BECAUSE AN IDIOT PERSON WASN'T PAYING ATTENTION TO HIS HEALTH FOR THAT ONE MOMENT, ahem, but it can equally come during just crossing a screen to reach another location. Suddenly being overwhelmed with enemies is possible, and deaths like these are - while always I think the player's fault, the game is undoubtedly fair - galling. You then have to sit through the exact same dialogue slowly appearing, followed by a load, followed by the exact same sequence of waking up in bed, being told the exact same words by Puku, and all this before then, for reasons that I find unfathomable, being forced to trudge through two or three screens at a snail's pace to collect the sword before you can carry on. Get the sword and then there's more exact same dialogue to click through, as well as the exact same tortuously slow animation sequence. It's bewildering, pace-breaking, and infuriating, all for no purpose at all. It could just as easily awaken you next to the sword and let you just bloody play.

Then, to rub it in, all your equipment shortcuts from the last play are pointlessly erased, meaning you have to reassign everything each time. (Sure, you'll often be restarting without items you previously had assigned, but let the player use the menus when they need to, rather than when they absolutely don't.

There's nothing different about your character each run beyond aesthetics. I think all this fuss and nonsense between lives would be less problematic if I were figuring out a new set of stats or the like, but none of that exists in this game.

The other most galling feature - and this will sound pedantic until you play the game, and then you'll understand - is how difficult it is to pick up coins and food. A huge part of getting anywhere is whacking at the foliage to gather money and health. But each that appears goes off in a different direction, and then bounces a few times before settling. And for reasons I cannot grasp, you can't pick them up until their extensive bouncing is done. There’s no magnetic attracting them, so you're forced to endlessly dash back and forth, retracing your steps to get any you've uncovered, even if you ran exactly through them as they bounced. It is SO MADDENING. Not least because they flash and disappear pretty quickly.

It's features like these, issues that don't seem to quite understand how the player will receive the game, that really get in Ditto's way. Smoothed out, letting you immediately pick up after a gut-punch of a failure, letting you gather resources without feeling ridiculous, letting you play tactically from early on, allowing all its good ideas to come more neatly together, it'd be truly special. I think it probably still could be.

I love so much about it. I love the shops, the characters, the roll, the enemies, the weapons, the puzzles... It's just a question of whether all those excellent things entirely come together.

As it is, it's a lovely, fun game that too frequently reminds me of its mistakes. And despite that, I want to keep playing. Which is probably rather important.