If you click on a link and make a purchase we may receive a small commission. Read our editorial policy.
The Witcher 3: Wild Hunt is five years old today! Can you believe it? We're celebrating it with The Witcher 3 Anniversary tag today. Happy birthday Geralt, you big hairy baby!

One of the first things you do in The Witcher 3's Blood And Wine DLC is fight a giant. He comes at you moments after you arrive in Toussaint (read: France), when a very silly looking knight rides past you while frantically tilting at a windmill. The giant erupts from that windmill, flailing his club around and sending errant sheep flying. They roll and baa, while you do cool sword moves around succulent countryside. It is both glorious and gorgeous, and a downright terrific way to kick off some of the best adventuring in videogames.

I sure hope you like being heralded in verse.

They really go for that sort of thing in Toussaint. They go hard. It is a silly place, where people swear oaths on herons and dress up as rabbits for courtly nonsense. Geralt, as you might expect, makes a fantastic foil. Especially when he joins in. 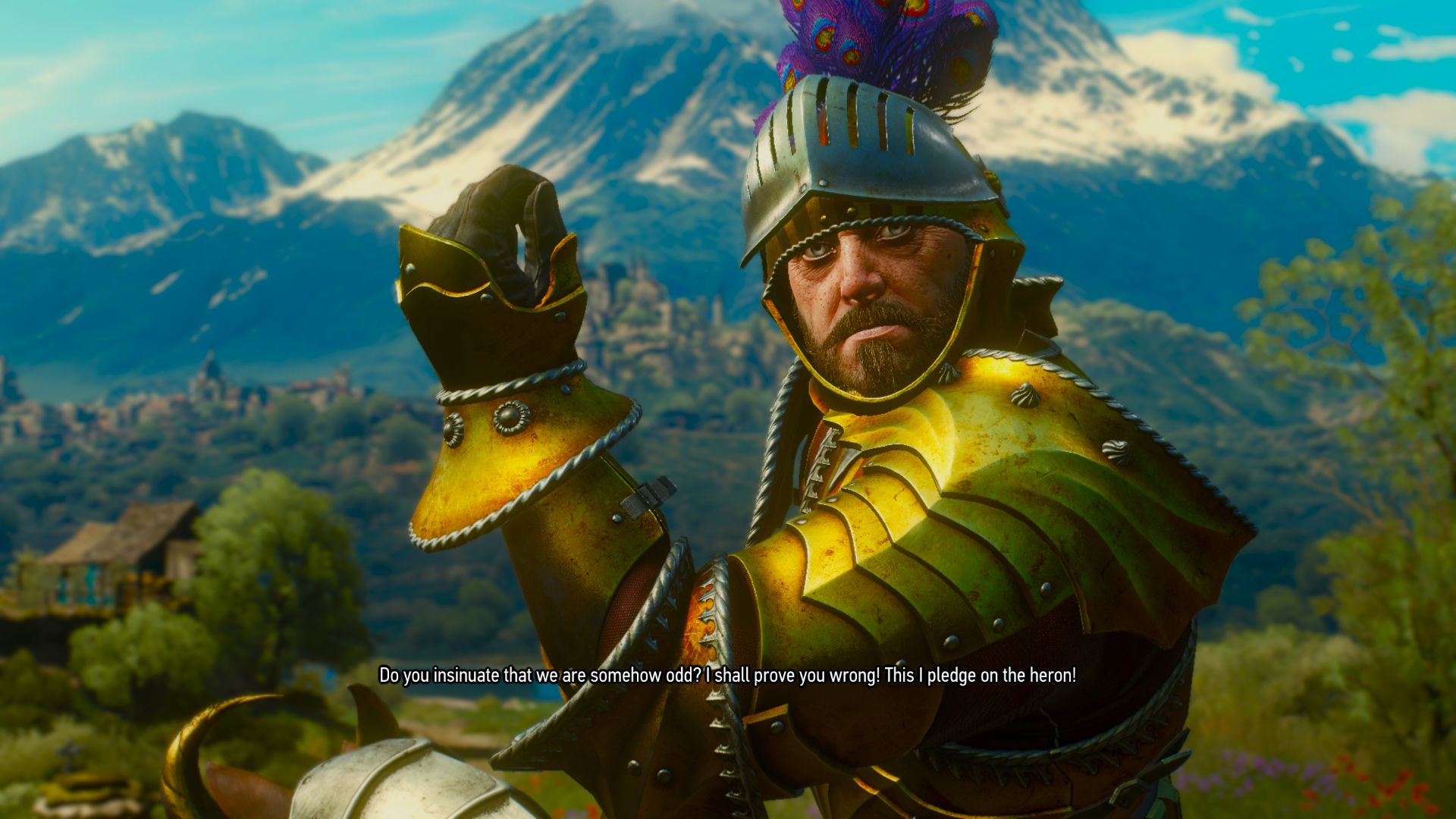 You're there at the behest of the duchess, who sends two adorable knights to come and fetch you from Novigrad. She wants you to stop a monster that's making "the streets run red with blood, while striking fear into the hearts of rich and poor alike". Or something. I got a bit distracted because when those knights appeared with their fancy, dreadfully-overwritten royal summons, I was busy admiring one of them as they nodded austerely in the background. Blood And Wine commits to every bit, and I respect that greatly.

Every quest contains a twist, or three. Just like in the main game, you can throw yourself at the world and adventures will unfold. Not the emergent silliness of Skyrim, where you become fixated on blasting goats down mountains with your magic voice, but the carefully-curated magic of storytellers who know what they're doing. 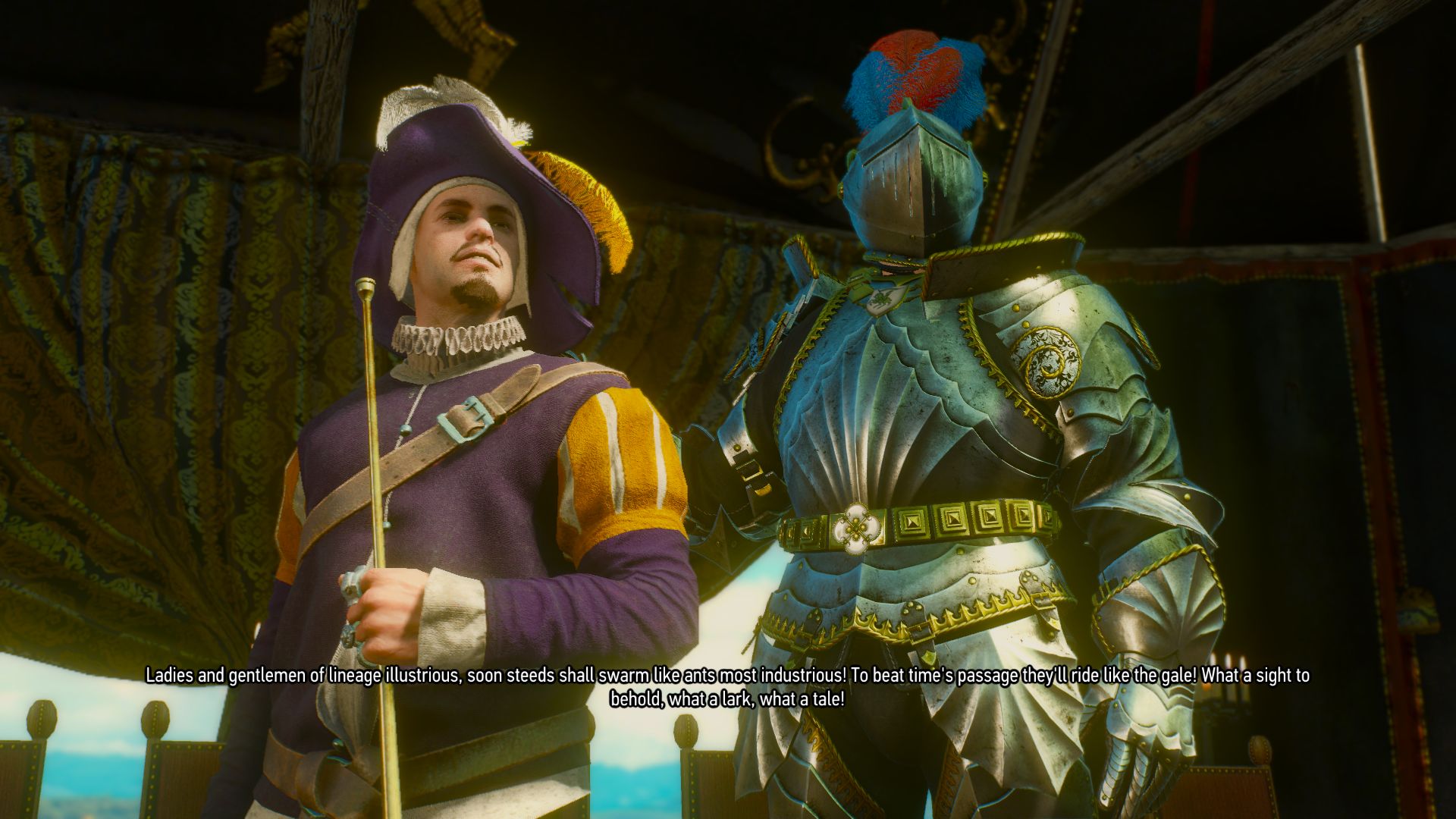 It's all remarkably consistent. I'm willing to go along with everything, because I trust I'll wind up somewhere interesting. Adventure can be anywhere. I was strolling down a street when a man ran up and told me about a bank account he'd set up years ago, in my name. He told me I just needed to head over and make a withdrawal. Naturally, I then found myself cutting through a Kafkaesque bureaucracy by buying perfume for one of the clerks. You can read the whole quest as a heartfelt tribute to people in terrible public service jobs who don't get enough respect from the public. I did not see that coming. 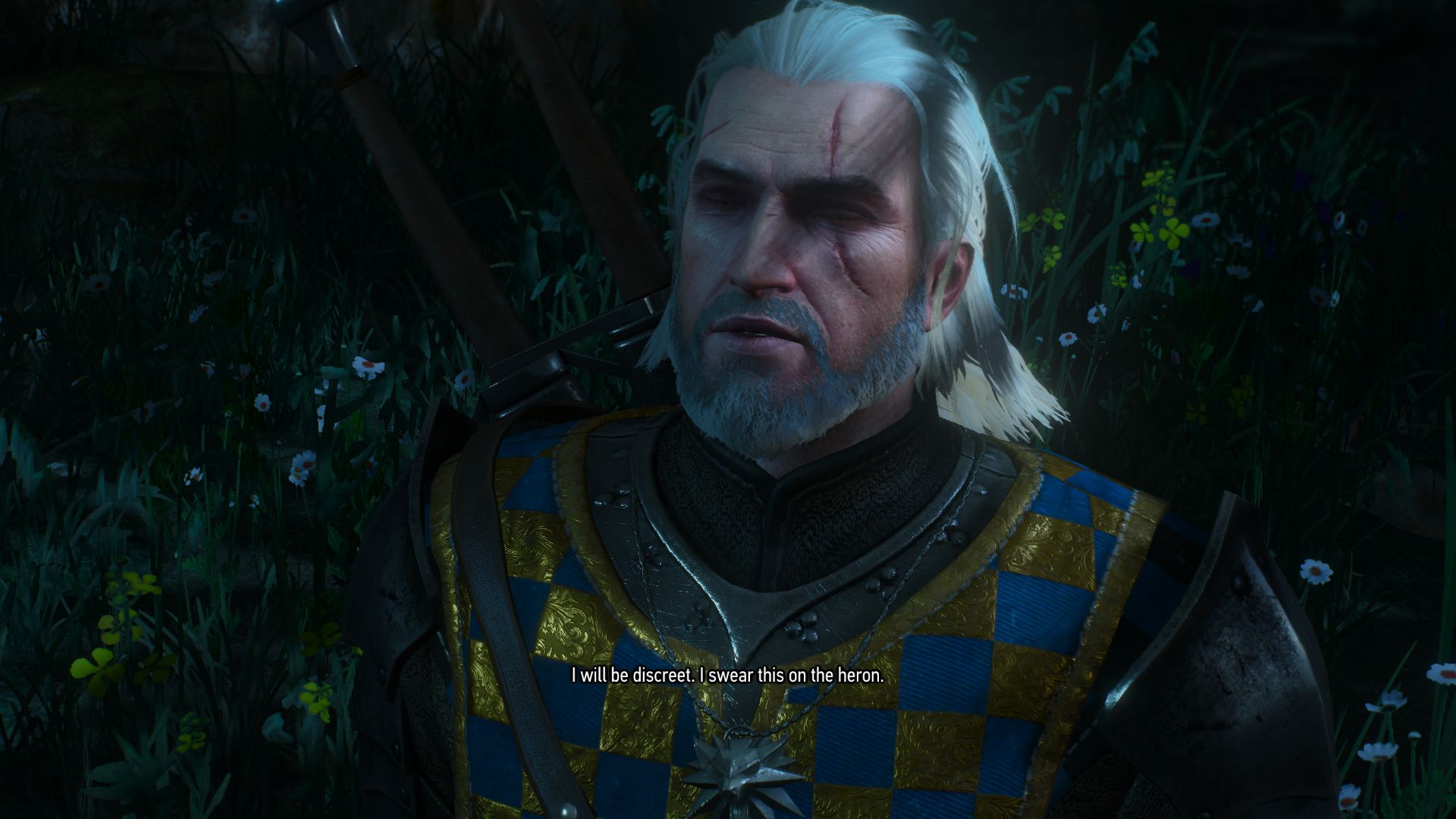 Another quest asked me to make a genuinely tough decision, and got me to care about the fate of two very minor characters. It touched me. Then it made me burst out laughing, when one of them momentarily punctured the balloon of sentimentality. I've laughed aloud a lot, in fact. It's all so playful, and so beautifully self-aware.

I just signed up for a fist-fighting tournament that turned into a rap battle, and what can I even say about that? It's just self-evidently great. 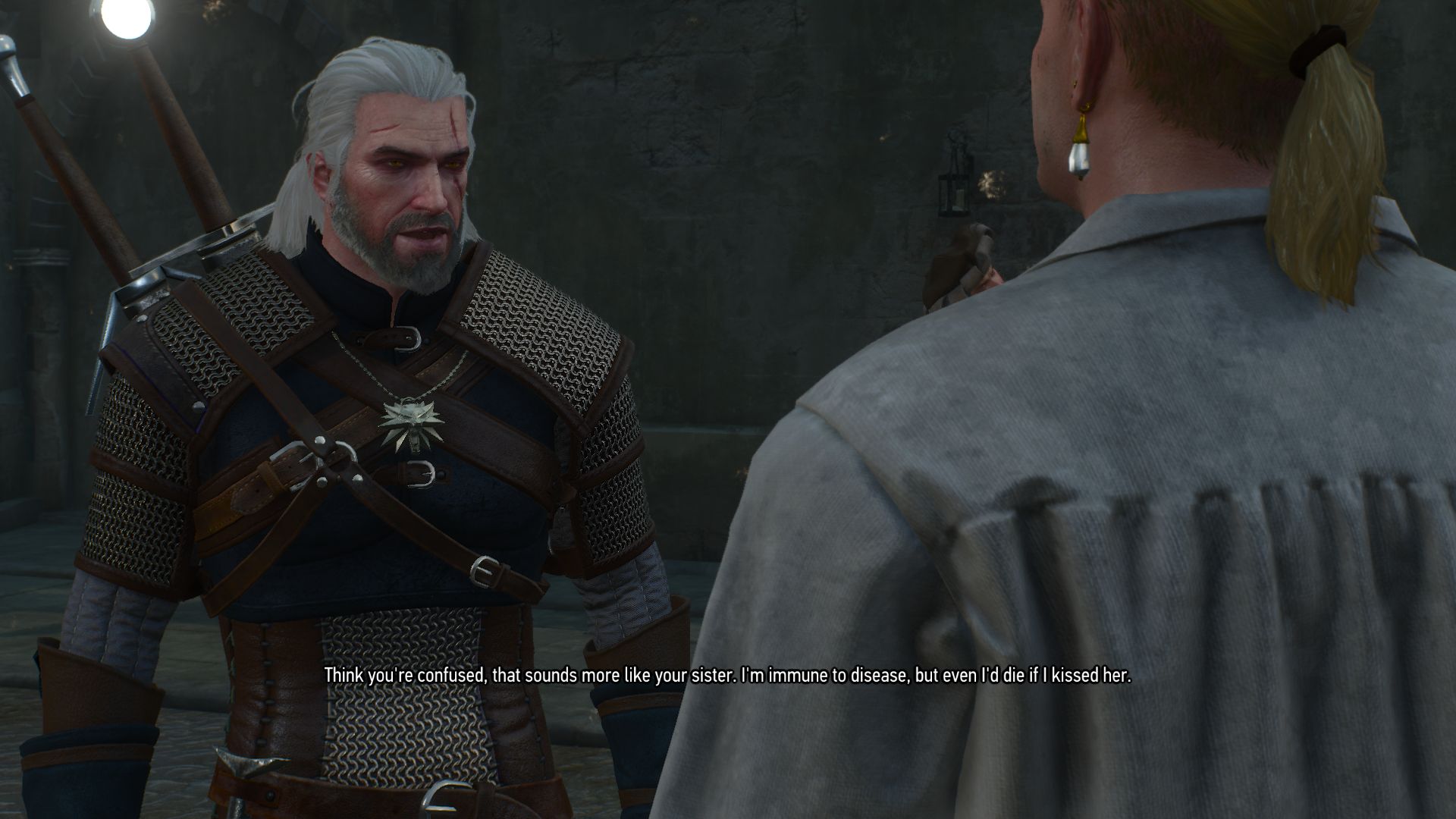 I'm so keen to poke into every corner of this world that I'm invested in boring stuff I'd usually ignore, like refurbishing a ridiculous vineyard that the duchess gave me. I don’t know why, but I paid loads of money for sword racks I don’t need. Look, here’s me hanging out with my swords. 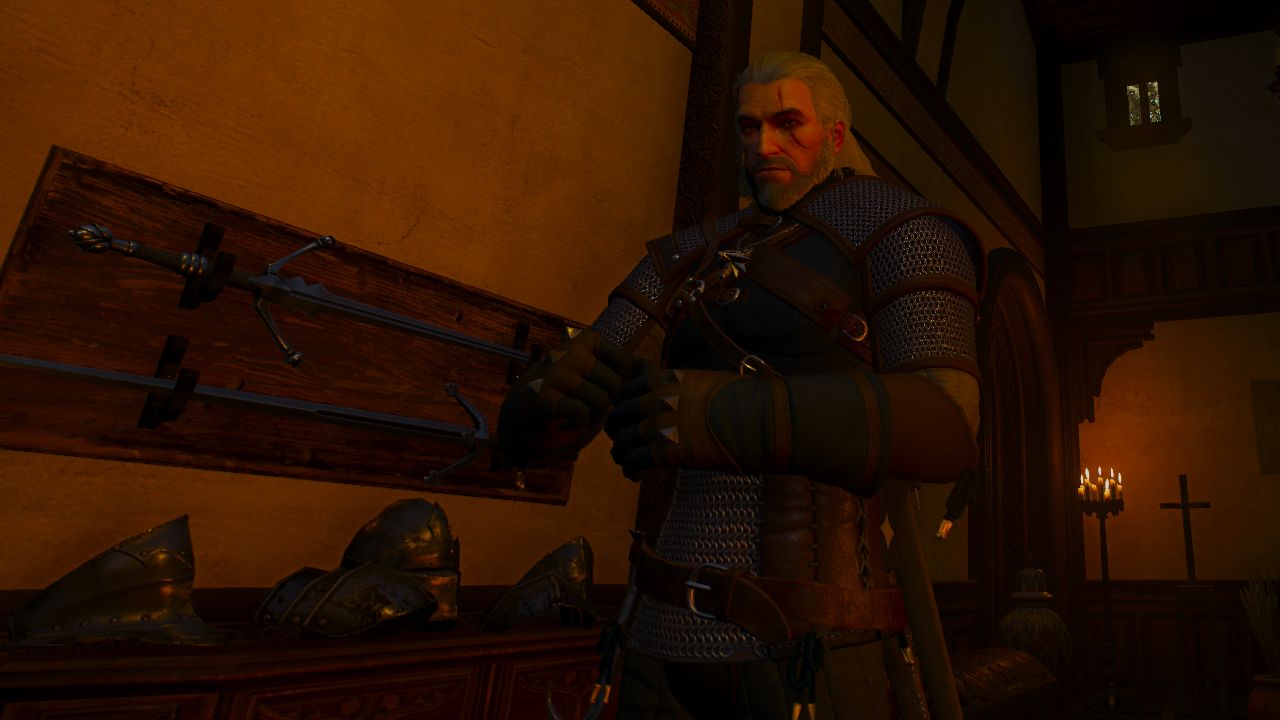 And here’s me hanging out with my armour, and my head servant. I should really get him to mount some more torches. 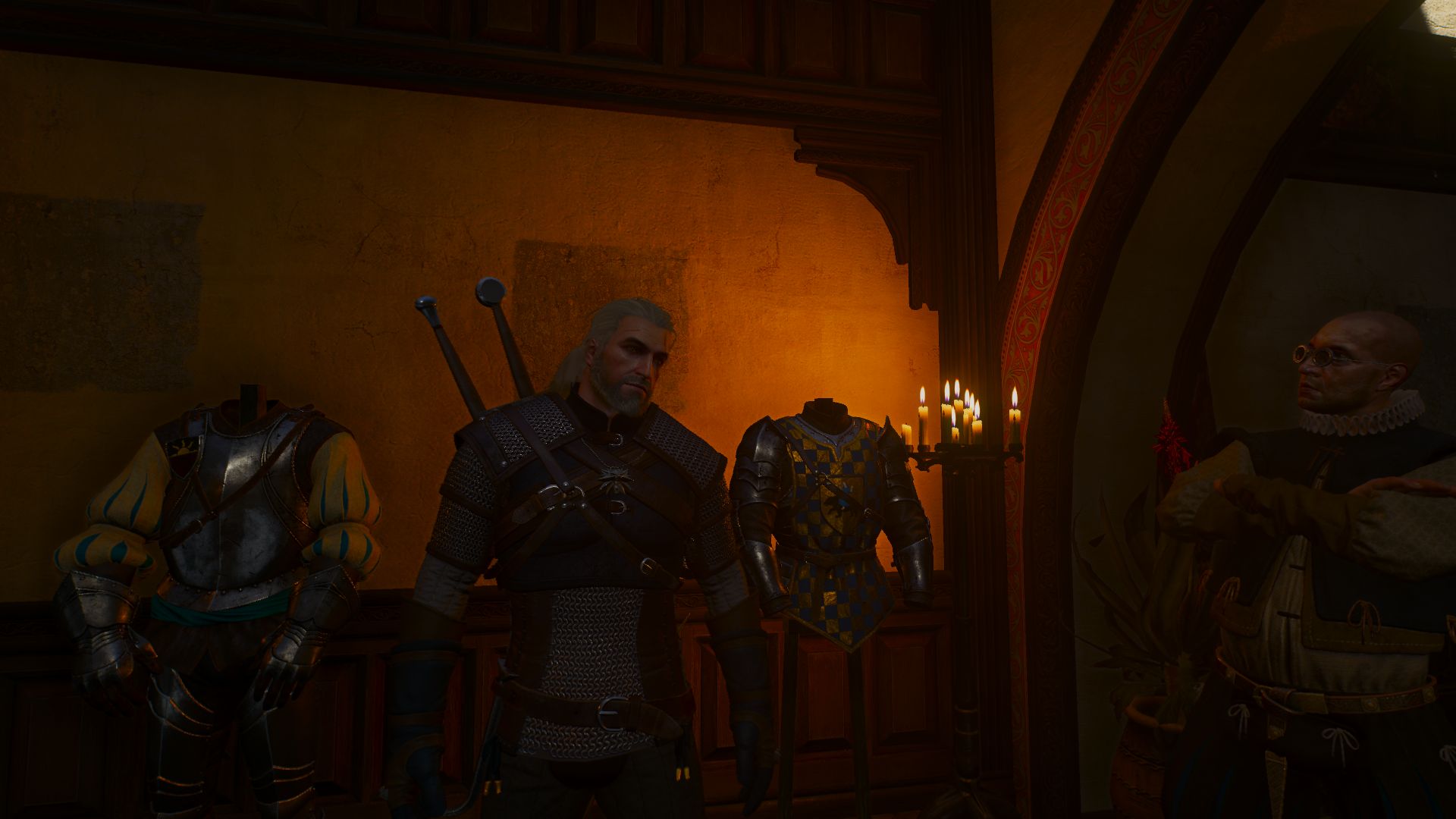 It does feel a bit strange to be lording it over an estate, but I suppose I am providing starving peasants with jobs. The necessary structures for my workers to meaningfully seize the means of production are not yet in place, as feudalism must first give way to capitalism before the rich seeds of socialism can grow. I digress.

It's not perfect. There are little slips, like a character praising me for smashing a tournament where I was terrible. Walking my horse around tiny paths can be annoying, and the combat is still only acceptable. There are also multiple sexy naked monster women when one was more than enough, but none of this is egregious. I care far more about the good than the bad.

Here is me standing in some bushes in front of my freshly-renovated home, with an added serving of birds. 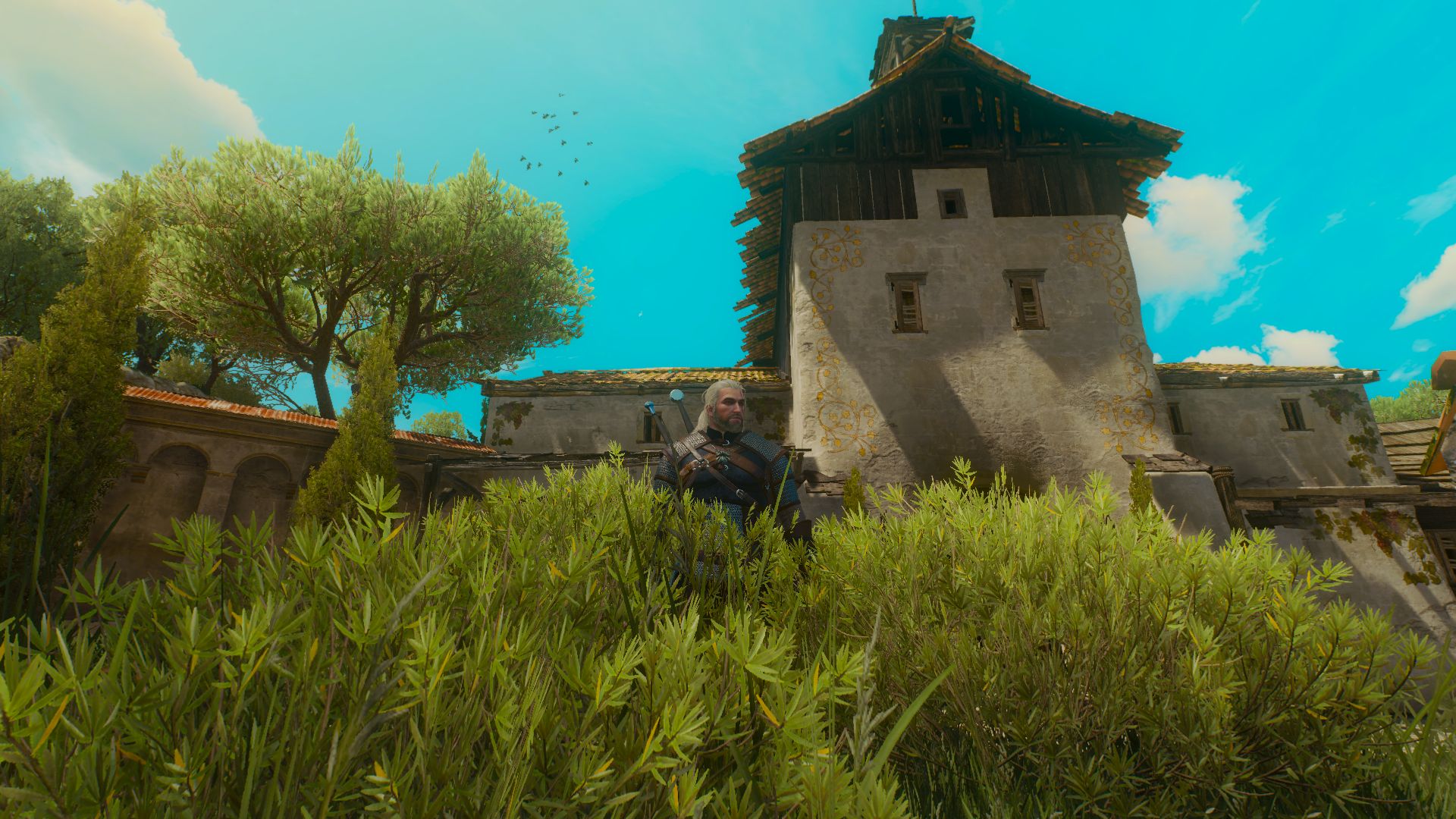 Blood And Wine is great. I swear it on the heron.