Fans of To The Moon and Finding Paradise, rejoice: developers Freebird Games have announce-o-teased their new game. Though maybe don't rejoice too much, because the new game is "a time-resetting thriller-mystery that involves a series of bloody murders". That's right, no more ethically questionable memory meddling until people believe they've fulfilled their dreams. Only murder now.

It's called Imposter Factory, and a teaser trailer awaits below. "Teaser" being the operative word.

For those that can't see, that's basically just a shot of a woman standing in a doorway, but casting a shadow of somebody who looks like they're imprisoned in a tower. There are also two umbrellas. I don't know if anything can be read into the umbrellas.

Imposter Factory is due out in 2020, and you now know as much about it as I do.

I'm certainly intrigued, especially because this press release doesn't say that you're solving the murders - just that the mystery involves them. I'm not saying Freebird Games would stop making entirely peaceful adventures about people struggling to do what they think is right and instead put you in the shoes of a time-manipulating serial killer, but I'm not not saying that.

In more wholesome news, Freebird have also released Paper Memories, a "50-page comic including stories from To the Moon, Finding Paradise, and the Sigmund Corp. doctors". You can nab that for £1.43/$1.69/€1.35 from Steam, or order an almost-certainly-much-nicer paper copy from Freebird's website.

I lied. To The Moon director Kan Gao did leave us one more clue about Imposter Factory, though I'm not sure how much I'm showing it to you because it genuinely reveals something or because I have a weird affection for the ASCII shrugging face. 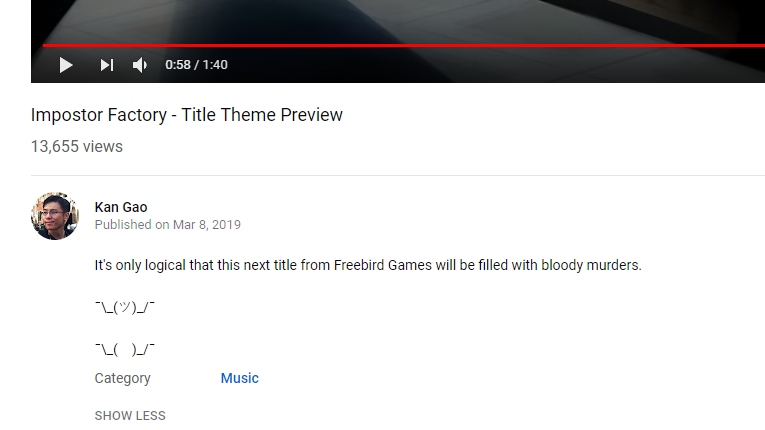