Shadowy oligarchs control the media, politics is riddled with corruption, the rich get richer and the poor go broke. It all sounds ridiculous, I know, but such is the premise of Tonight We Riot, a mass protest brawler released this week that wears its politics boldly in a red bandana 'round its neck.

On the face of it, Tonight We Riot is yer usual side-scrolling punch up. Only, in lieu of a single muscle-bound fighter, you're controlling a throng of protestors, activists and disgruntled workers clad in red, wielding bricks and flaming torches against an increasingly-militarized police force. As a work, it is decisively not-subtle.

Beyond the more blatant red-flags-and-molotovs aesthetic, though, Tonight We Riot pushes collective action through its core loops. There's no one player character, with you instead taking control of one of your many gathered protestors. Actions taken are amplified by the gathered mob, and you're encouraged to both bring more workers into the folk and protect the lives of those beside you.

Tonight We Riot plays its dystopia up to 11, of course. The world is comically shit, grim with neglect and pollution. That cops will strike with lethal force whether you're protesting peacefully or not isn't quite as comfortably unrealistic as you'd hope. But this is a game that sells itself on getting political anger out, via "the unique catharsis that comes from throat-punching a billionaire ghoul who would rather watch the world and everyone on it burn than lose a tax break".

At this moment in time, it's hard not to say that's a real tempting offer. 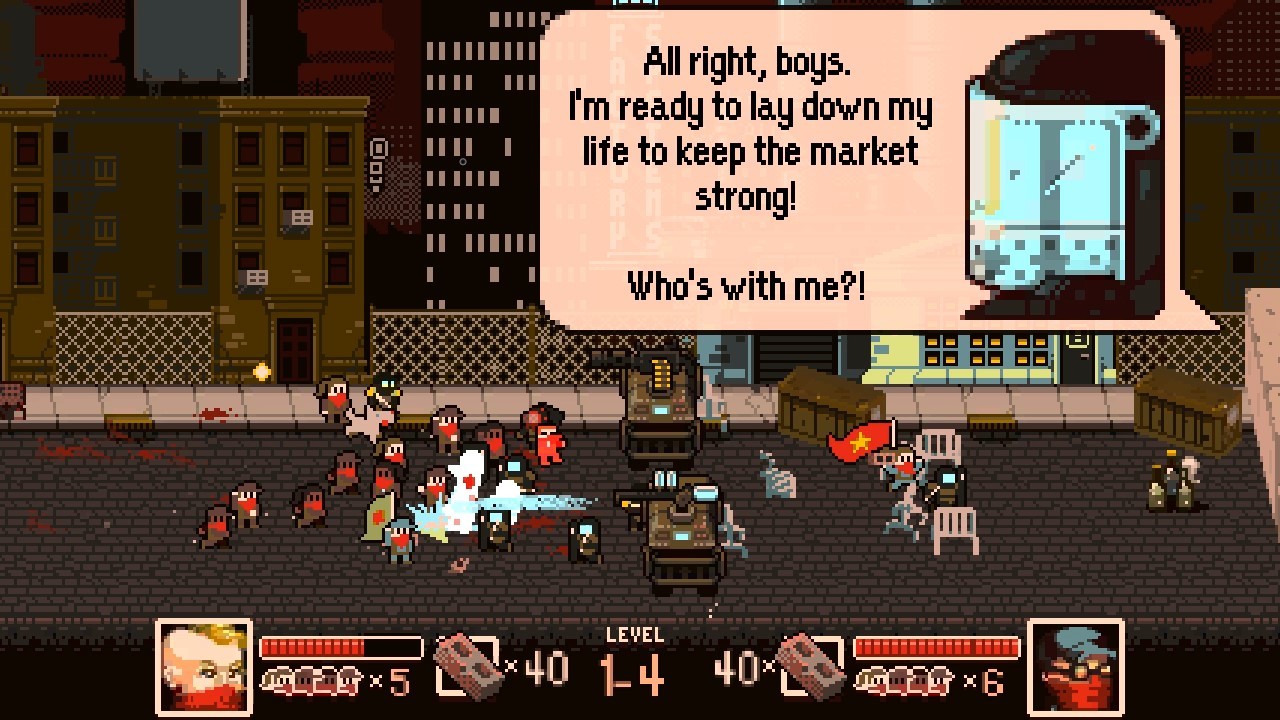 So yeah, it's a bit on the nose when a riot cop says he's willing to die to defend the market, or when walls are lined with job ads for "Shäckl". But for developers Means Interactive, that's sort of the point - an effort to discover what an "honest, straightforward, unapologetically leftist game" would look like. As coder Stephen Meyer put it to Kotaku:

“There’s tons and tons of games that have been delivering pretty strong political messages, whether they meant to or not. Most of the games in the [modern military] genre are like [neoconservative] fantasies. They enforce this idea that the very best way to make the world a better place is by massive military force, that you don’t need organization and societal change. And there’s lots of xenophobia in there, too.

"You see these neocon fantasies all the time and you don’t really see leftist fantasies. In our tiny little way, we were trying to be an answer to that.”

It's an interesting counter to the likes of Half-Life 2 or Red Faction: Guerrilla - games where a wider revolution is framed as an inconsequential backdrop to Player One's heroics.

Its politics come from a place of conviction, too - like Dead Cells developers Motion Twin, Means Interactive styles itself as a worker-owned cooperative, a structure it hopes will give the team stronger long-term stability. In the same Kotaku interview, artist Ted Anderson noted: "[Worker-owned studios are] a much leaner way of producing games. You don’t have a whole suite of executives at the top milking the company for all it’s worth."