Mortal Empires is Total War’s grandest of grand campaigns: a stunningly huge global war with over 100 factions and 35 leaders duking it out over multiple continents. In terms of scale, it’s the series at its most ambitious, and its most daunting. It took me an hour of second-guessing and two false starts before I finally settled on a faction and leader. It’s excessive, really. I love it.

After Total War: Warhammer 2’s tighter, objective-driven Vortex campaign, I was hesitant to jump into the more aimless Mortal Empires. Like the first Warhammer campaign, it’s largely a free-for-all with each faction being given specific capitals to conquer and the eventual Chaos invasion to survive. The cinematics and the tense race for control of the titular Vortex are gone, and it’s a loss, but plenty of other Warhammer 2 improvements have been carried over. 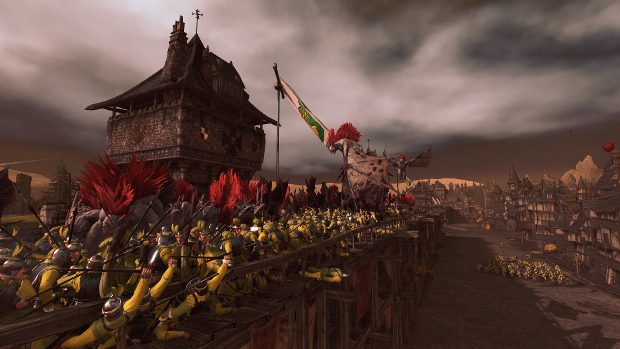 My very first Total War: Warhammer campaign, back when I first got my hands on it last year, was with the hoity-toity Vampire Counts, so for old times’ sake, I returned to the haunted forests and imposing castles of Sylvania. This time, though, I picked one of the DLC leaders: Vlad von Carstein. Every piece of DLC, aside from the Norsca faction, can be used in Mortal Empires.

An early threat to the Vampire Counts are the Dwarven factions milling around the mountains to the east and south. The moment you turn around to deal with the Empire, those sneaky, stumpy blighters could crawl out of their underground fortresses and tumble down the mountainside to lay siege to Vampire cities. Dealing with them used to mean razing their settlements, but a razed town can always be colonised by Dwarves again, and until then it would just be left fallow. In the first Warhammer, factions could only colonise specific types of settlements, so these Dwarven towns were ultimately worthless to the Vampire Counts. 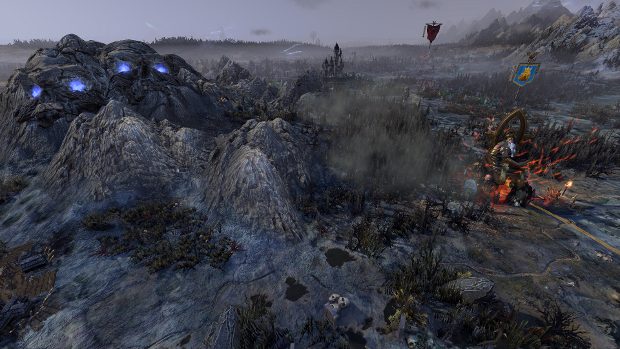 When Warhammer 2 introduced the concept of climates, it let any faction put down roots in any settlement, with the caveat that settlements in the wrong climate would be penalised. Mortal Empires uses the same rules, and it's had a pretty big impact on how factions develop. In my case, it meant that I was able to settle some of those Dwarven outposts and protect my rotten heartlands, but it also inspires some unexpected conflicts as factions take unusual expansion paths and collide with their new neighbours.

Playing as one of the Old World factions does feel different, then, with more places to colonise, ruins to explore and tweaks that bring them more in line with the Warhammer 2 factions. But while these are welcome improvements, until Creative Assembly ports over all the changes from the first Warhammer’s fantastic Foundation update, some of the leaders are a step back from their counterparts in the original game. 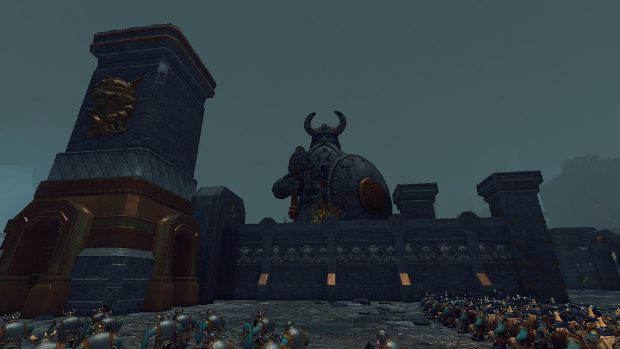 Having not played the Vampire Counts since the my first week with Warhammer, however, the impact of the Warhammer 2 changes on their own was more than enough to stop it from feeling like I was treading old ground. The Warhammer 2 UI, which offers more fine control and greater legibility, is a particular blessing, especially when trying to manage a campaign of such intimidating proportions.

It wasn’t until I started my second game as the Skaven Clan Mors that Mortal Empires and I really clicked, though. The first game’s factions represented the high point in Creative Assembly’s long history of designing armies and empires, but Warhammer 2’s faction design is more out-there, with powerful, game-changing special abilities - rites - and more elaborate empire management mechanics. In Mortal Empires, this makes them shine just a bit more brightly. 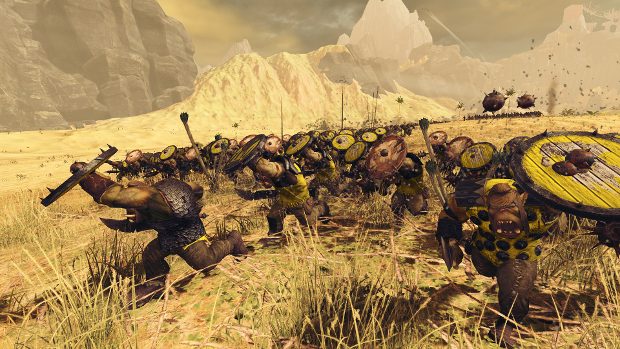 Clan Mors is also a special case. Picking Queek as the leader starts Clan Mors in one of the game’s new starting positions, in the south east of the map, surrounded by Savage Orc tribes, various undead factions like the Nechrarch Brotherhood, and lots of Dwarves. It’s an area that hasn’t been a focal point so far, but it’s where we’ll probably see Araby and the Tomb Lords appear. It’s also one of the trickiest places to start in Mortal Empires.

See, Clan Mors has exactly one settlement, and it’s surrounded by enemies both current and potential. To the south and east are settlements that are already hostile. To make things worse, Queek also has the Karak Eight Peaks objective. If you’ve played the Dwarf or Goblin factions from The King and the Warlord DLC, you’ll already be familiar with it. It tasks the Dwarves and Goblins, and now Clan Mors, with conquering the ancient Dwarven settlement. Until they do, they suffer penalties due to the shame of being totally rubbish. 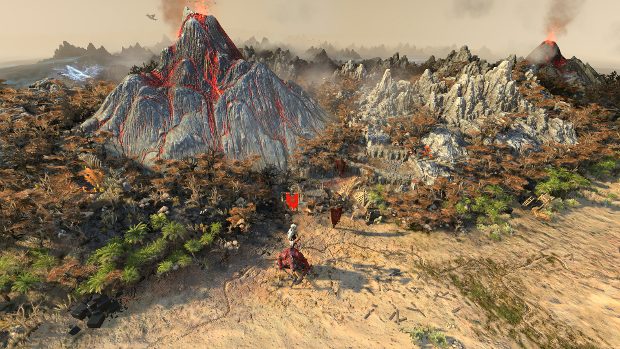 It’s proving to be a tough journey, and a long one, as Queek starts quite a bit south of Karak Eight Peaks with no backup or Skaven allies. It also might be some of the most fun I’ve had with Total War: Warhammer. There’s a great deal for the Skaven to contend with right from the get-go, and the magical rites feel just a shade overpowered when most of the other factions have to do without, which I’m very much in favour of - remember, imbalance is good. And while I might miss the pace and focus of the Vortex campaign, Mortal Empires’ war-torn sandbox isn’t entirely without direction, whether your objectives involve conquering a Dwarven hold or going on a quest for a magical weapon.

Turn times might be a problem for the impatient. It’s definitely long enough for some glances at Twitter and loud, melodramatic sighs, but not so long that you could make a cup of tea. It’s the cost of the scale, but it’s also, perhaps, a sign that Mortal Empires is just a little bit too ambitious. I can’t even conceive of how I could find the time to complete a long campaign. 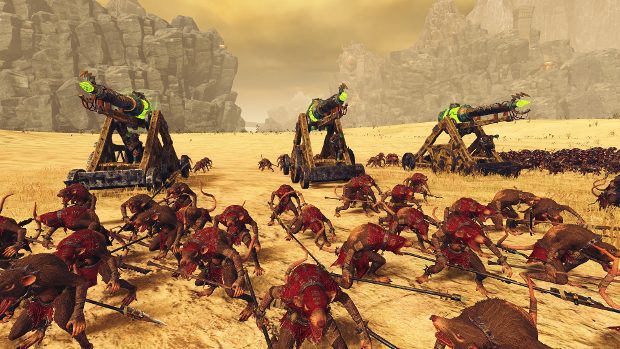 I don’t need to, of course, since there are still short victory options that are time-consuming enough, but more to the point, I don’t think being overly ambitious is really a problem. The slightly experimental streak that Creative Assembly’s been fostering over the last few years, of which Mortal Empires certainly seems to be a result, has led to some of the series’ most game-changing features, from epic set piece quest battles to an entire faction built around ranged, guerilla tactics.

Mortal Empires is Total War taken to its absolute extreme, where it becomes a crazy, apocalyptic battle royale spread out across a world. I definitely still balk at the time investment, but I’m gleefully plotting my bloody incursion up into the Old World at the head of a swarm of Skaven, regardless. Smashing all these weird factions together on this stupidly huge map was a brilliant idea, even if it’s a bit crowded. Eventually the Norscans will join the party, then all the Warhammer 2 DLC factions, and after that it’s Warhammer 3 and its accompanying DLC… and that’s when the world simply collapses in on itself. A fitting end for a universe constantly on the brink of destruction.