Times are changing and old boundaries are coming down. It's easy to see, thanks to the likes of the Touhou series - once nearly unobtainable outside of Japanese import services - seeing massive worldwide success on Steam.

One of the biggest spinoffs of the Japanese indie mega-franchise (which we explained the appeal of a bit here) is the fighting games, co-developed by Twilight Frontier. The very latest, Antinomy of Common Flowers (officially the 15.5th game in the mainline series), is set for its physical debut at massive indie expo Comiket in just two weeks, with a global Steam launch two weeks later.

As with the previous Steam Touhou release (the chronologically confusing 16th game), Antinomy of Common Flowers will be launched exclusively in Japanese, but don't expect it to stay that way for long. If I were a betting man, I'd wager that there will be a full english translation patch for the physical version released within a week of launch, and it'll be under 48 hours from the Steam launch until it's adapted to work around whatever DRM the new version may bring.

As you can see in the gameplay trailer above, this isn't an ordinary fighting game. For starters, there's no ground. The fighters hover in the middle of the screen, meaning that you can 'jump' both up or down, making for some interesting strategies that aren't really possible in any other series. There's also a strong focus on projectile attacks and dash moves with invulnerability frames, making it feel (appropriately enough) like a hybrid of shmup and traditional fisticuffs elements.

If it's anything like previous Touhou fighting games, 15.5's story mode will play out more like a boss-rush than a traditional fighter, with your opponent escalating through waves of increasingly spectacular spells as you try to memorise their patterns, and evade long enough to chip away at their health. Unlike previous titles in the series, 15.5 is moving to a 2v2 tag-team system, which seems to be a popular move across the genre lately. 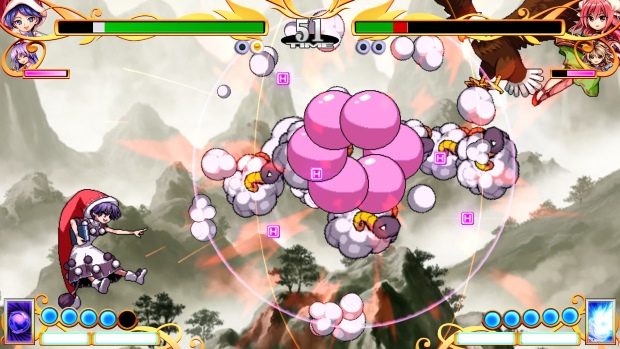 While most of the cast of the new fighting game are returning from previous iterations, the biggest surprise (which raised quite a few cheers among dedicated Touhou fans) is Doremy Sweet, caretaker of the dream-realm. You can see her and her intensely fluffy magic (Jeff Minter approves) in the screenshot above. Not too many fighting games where you can claim to have beaten your opponent into submission with a swarm of cloud-sheep.

Touhou 15.5: Antinomy of Common Flowers will be released on Steam on January 5th, just a fortnight after its traditional Comiket debut. No western RRP has been announced, but I'm hazarding a guess at between $15-20, based on its ¥2000 Japanese price-tag. The game is set to be a Steam exclusive release, so you can wishlist it here to get informed of when it launches.