Touhou is a phenomenon. Despite niche appeal, this long-running series of bullet hell shmups has grown into an enormous shared franchise in Japan. It's an indie scene unto itself, enabled by creator Zun giving his blessing to people making and selling fan works. Touhou boasts twice-yearly conventions dense with cosplayers, multiple official comic lines and fan-made works including music, anime, and games spanning every genre, including boozy RTSs and even football RPGs. And yet, it's still an almost impenetrable mystery to those standing on the outside.

That barrier has become a lot easier to traverse yesterday, as Touhou 16: Hidden Star In Four Seasons has arrived on Steam, accompanied by a three-level free demo, and a comprehensive - albeit unofficial - localization patch.

Update: The full release of the game came with a little more DRM than anticipated. The Touhou translation crew are attempting to work around it. Please wait warmly until it is ready.

Update Again: Well, that was fast. The translation patch is fully compatible with the Steam version of the game now.

While there have been many opportunities in the past to import these games from Japan, and I know of at least one fan-game to get official blessing for an international console release, this is the first time the long-running series has been available via a major global storefront, although Touhou 14 got a similar release on Playism back in the day. Despite being a Japanese language only release, the Steam version is fully compatible with the community-made English patch made months ago for the original retail release of the game. Series creator Zun has stated that he has more faith in his fans to handle localisation than a third-party company, so an official translation seems unlikely at this point. 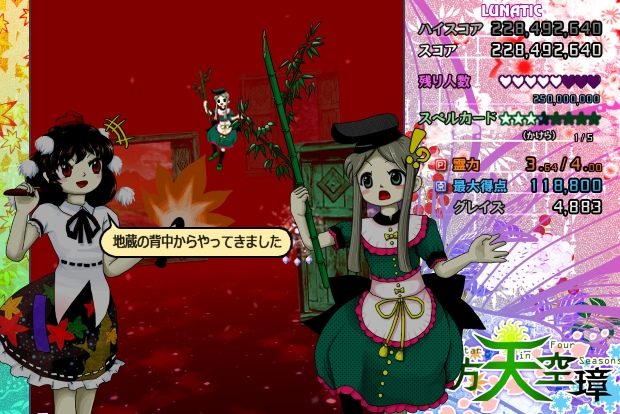 Set in the strange parallel world of Gensokyo, much of the Touhou series revolves around shrine-maiden Reimu Hakurei and her quest to avoid doing any work. She'd rather just hang out with friends, drink, sleep in the shade and count her shrine donations, but unfortunately living in a magical realm full of fairies, spirits, monsters, vampires and more means that incidents happen from time to time, and nobody is going to calm down until someone sets things straight. This time round, all four seasons seem to be happening simultaneously in different locations around Gensokyo, so it's off to the skies to shoot at fairies until someone explains what's going on.

This adds a little wrinkle to the usual Touhou action. You've got your usual movement, shooting and a screen-clearing smartbomb, but clearing enemies and 'grazing' enemy bullets (have your character's sprite touch them, but not the central hitbox) will increase the Season gauge. Hitting the Season Release button will create a bullet-eating temporary safe zone, and also give you a hefty slab of points if you manage to absorb a lot of a bosses attack. Beyond that, this is as straightforward as Touhou gets, and a solid enough introduction to the series.

As mentioned, the enormous shared dream that is Touhou extends far beyond any officially released game. Due to the often-commercial nature of Touhou fan-works, it's hard to get hold of them outside of Japan in any legal capacity, but it's worth being on the lookout for the Koumajou Densetsu series, transplanting the Touhou cast into a super-polished Castlevania tribute replete with some astoundingly good gothic interpretations of the characters, all backed up by an official (if slightly patchy) English translation. 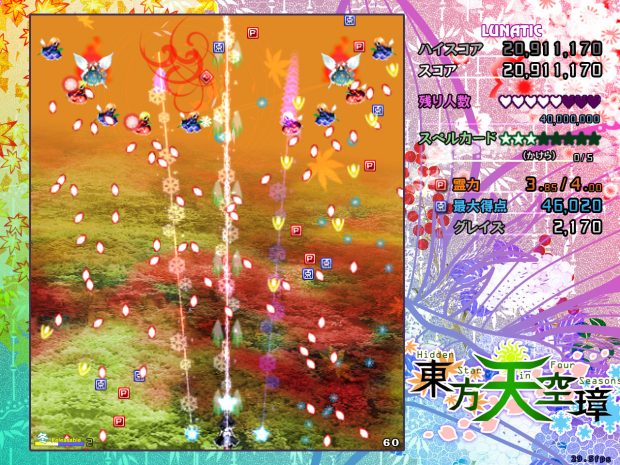 There are also some professional-quality animated shorts, treating the setting as if it were a long-running TV anime series, and even a series of Touhou fighting games developed by Twilight Frontier that are counted by Zun as series canon, making them numbered releases along with the mainline games. The latest of these is rumored to be headed to Steam as well. Good news, as they're genuinely unique games, mixing shmup elements into the fighting game genre, and where the story mode plays out more like an arcade boss-rush than a traditional series of bouts. Until then, we've got Touhou 16.

Touhou 16: Hidden Star In Four Seasons is out now on Steam for £11.39/€15/$15, and if you want to play it in English, just grab the patch here. There's a three-level demo on the storefront as well, and is compatible with the same translation patch.