The main thing I thought as I began to play Two Point Hospital, spiritual sequel to 90s medical management hit Theme Hospital, is that I barely had to think at all. Some alchemy of 90s sim game muscle memory and slick, thoroughly 21st century building assists meant I hit the ground running, immediately in my happy place of dragging out room sizes, rotating machinery and the time-honored architectural Tetris of making all this fit inside a finite space. It felt good - but how much of this was this the placebo effect of nostalgia?

Developers Two Point Studios - led by original Theme Park alumni Mark Webley and Gary Carr - have been at pains to argue that Two Point Hospital is not a straight-up 2018 version of the 1997 hospital design and management simulation. Based on my hour-and-a-bit with the game's introductory level, I'm not ready to endorse this sentiment: that opening salvo is almost exactly what you'd probably picture if someone said 'Theme Hospital remade today.'

Which is to say, the gradual creation of a - hopefully - lucrative private hospital, with an ever-growing sprawl of specialist rooms to treat an ever-growing array of fictional ailments, with all the hiring, spending and agonising about where to place toilets, vending machines and reception desks that entails. It's as natural as breathing and as familiar as Drs Greene, Ross and Carter to any PC gaming child of the 90s. 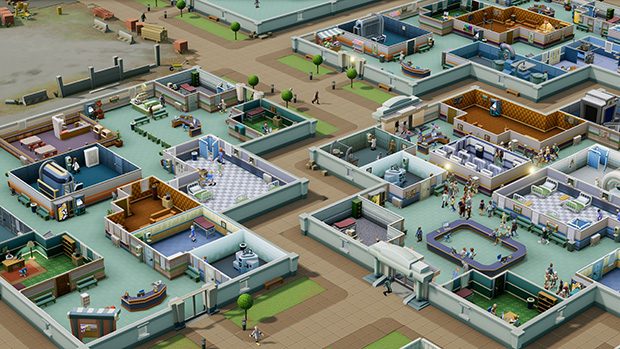 Clearly, memory plays its tricks, and though concepts and mechanics remain, Two Point isn't stranded in the era of Noah Wyle when it comes to presentation and interface. The blocky smudge of 97 wouldn't hold up well against Two Point's crisp cartoon style and deftly-animated sense of bustle. More importantly, there's pretty much every quality of life improvement you might care to mention - grids snapping chummily into place, objects rotating to align with walls and the casual ease of mouse-based scrolling, zooming and rotating. This is what I mean when I talk about hitting the ground running: Two Point understands what we need in 2018.

I ran into remarkably little downtime, too - outside of the brief but not too brief tutorial, it didn't seize the controls away from me or parachute cutscenes over my hive of construction, hiring and grumbling patients. Scene-setting is handled by intercom announcements and an in-game local radio, which flit between missives about successes or calamities within your hospital, foreshadowing later events such as outbreaks or visiting celebrities, and outright comedy.

Your feelings about the latter is probably going to depend on your gut reaction to a phrase like "classic British comedy", I imagine. There's an ongoing theme of sardonic gags about how patients are a massive nuisance who barely deserve basic human sympathy, but it's more Hi-De-Hi than it is edgy. The comedy diseases, meanwhile, could probably slot comfortably into an episode of Wallace & Gromit - gentle wordplay and sight gag amusement rather than lightning wit as such. In fairness, the devs are keeping most of these under wraps for the time being, so my North Star for the illness gags remains the already-revealed 'Lightheadedness', in which affected patients have an actual lightbulb for a bonce. 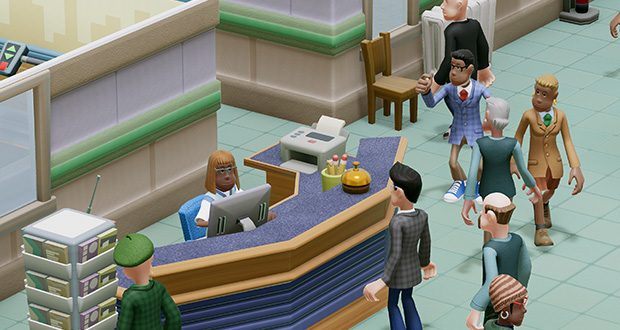 Again, it's all very in keeping with the eyebrow-waggling cheer of the original Theme Hospital - anyone hoping for a vicious laceration of health insurance, pharma price-fixing and privatisation should probably look elsewhere. Your old mate Captain Grim here doesn't have the greatest tolerance for the broader end of the comedy scale, but I'm happy to say that the ceaseless spray of gags didn't actively annoy me. Whether that'll still be the case eight hours on, I can't say.

What I can is that I have an answer to the most immediate litmus test, which is whether or not I wanted to keep playing when my time was up. It's a definite yes: comfort food this may be, but it didn't come across as overtly old-fashioned, and under-the-hood UI and UX skilfulness made the raw act of building wards, offices and staff rooms feel fast, fluid and fresh.

My only slight reservation - which could well be corrected by more time getting to know the financial management screens - was that it didn't seem as straightforward to identify choke points and shortfalls as it did to build a room full of silly medical machines, and that the solution to most problems seemed to be "build more copies of room x,y, or z." I'm hopeful that latter will ease as later levels introduce more diseases, more remixes of the core 'make a lot of people better!' scenario, and with 'em more of a sense of picking the right tool for the right job. The devs also told me that there'll be options to make your hospital specialise in certain treatments, which introduces of a meta-layer of selling and marketing your own drugs and services to further increase the flow of pharmaceutical lucre. 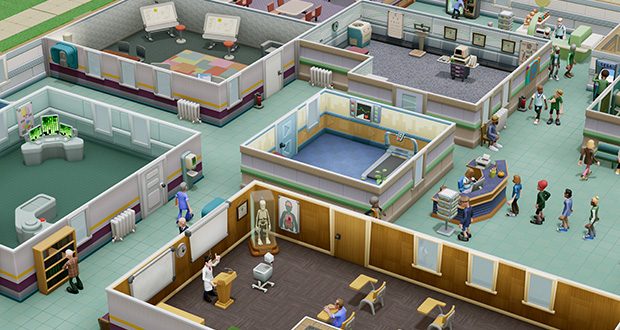 As I say, I didn't detect too much of the wonder-drug known as The New pumping through Two Point Hospital's veins, but it's that treatment specialisation/mercenary monetisation that gave me the strongest hint that it might ultimately find its own identity. Even if it doesn't, I'm not convinced it particularly needs to. Management sims have found their way back into the PC mainstream in various more experimental or ambitious ways lately - look to Factorio or Frostpunk - but there remains a surprisingly large hole with a sign next to it reading 'Bullfrog-style charm and cartoonishness.' Two Point Hospital would seem to be picking up that baton almost effortlessly.

We'll have more on Two Point Hospital, including some footage and dev interviews, tomorrow. The game's due for release later this year.