A confession: I think Rabbids are great. I am delighted when Ubisoft's daffy rabbits do something foolish then shout "BWAAAHH!" (I assume it is the same joy many others feel with Minions.) I would like to poke one in the belly, and would fully understand if it bit me. I like the former Rayman antagonists so much that they can lead me to things I otherwise have no interest in. Computer programming? Not for me, thank you. But a free Rabbids game teaching programming? Buddy, I've already downloaded Rabbids Coding! And if this fools me, a sophisticated intellectual in my mid-thirties, maybe it'll work on children too.

Out of nowhere, Ubisoft launched Rabbids Coding! today (yes, the ! is part of the name). It's a free game teaching basic programming logic, which Ubisoft say is "suitable for players age seven and up" because younger kids might struggle with the reading. Hey, I'm "up".

Rabbids have invaded a spaceship and are trashing it, the story goes, so we need to clear them out by dumping them into time travel washing machines (the Rabbids lore is rich and complex). This involves programming orders for robots and mind-controlled Rabbids, moving them through wee puzzle scenes to eject the blighters and clean up their mess.

Programming is done in a familiar way with command blocks dragged and dropped into sequence. It's a bit like Human Resources Machine and other programming puzzle games I've barely touched because they didn't have Rabbids. And yep, obviously it's simple.

The game has 32 puzzles plus a sandbox mode. They escalate in complexity as they introduce new ideas and longer programmes and that. It's basic. It will teach basic logic of breaking actions into clear steps to reach the desired outcome, and that's fine. 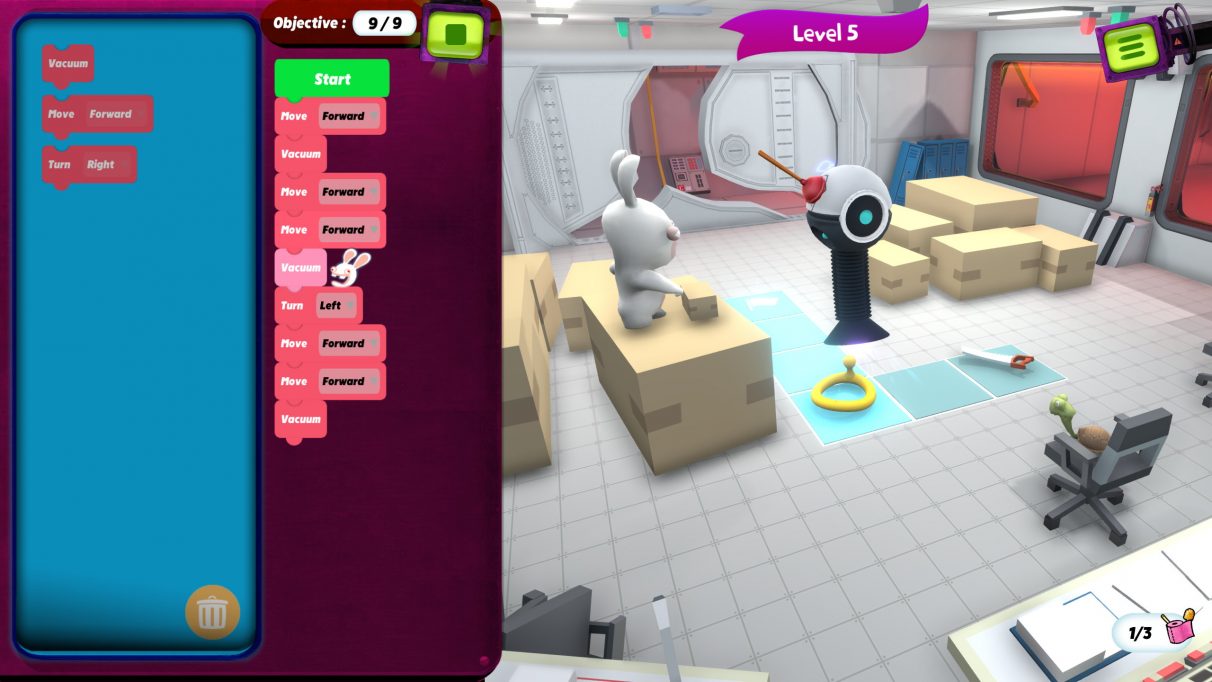 "Ubisoft is committed to preparing the next generation of video game developers, and what better way to start teaching them the basics of coding than with a fun and interactive learning experience," game director Olivier Palmieri said in today's launch announcement. "We strongly believe that video games can play an important role in learning new technical skills, and we're looking forward to sharing Rabbids Coding as a teaching tool for all ages."

Perhaps it will also teach important lessons in the ethics of programming. I stopped playing because the game was forcing me to remove Rabbids from the spaceship, when I want to warp in more Rabbids for more spacehijinks. Kids, it's important to take a stand against your programming being used to immoral ends. And remember to unionise.

Rabbids Coding! is free through Ubisoft's Uplay client. It's made by Ubisoft Montreal.

I shall also point out that most Zachtronics games are free for schools. They truly are gaming's finest non-Rabbid programme-o-logic-a-puzzle games.