If you click on a link and make a purchase we may receive a small commission. Read our editorial policy.
Premature Evaluation is the weekly column in which Steve Hogarty explores the wilds of early access. This week, he's teaming up with frustrated strangers to build a railway.

I am repeatedly amazed by my ability to be bullied in almost any social situation, no matter how narrow the means of communication. I’m fairly certain I could be dissed by semaphore, or slagged off over morse code. In four-player co-operative track building game Unrailed you can only express yourself using four emojis and a few resource icons, but even that is enough verbal bandwidth for my online teammates to be mean to me, hounding my tiny dinosaur avatar with a barrage of floating angry faces as I inadvertently choose the worst available train upgrade in the menu screen between levels. In the growing list of places I’ve been harangued by the general public, this game joins a Pizza Express in Nottingham town centre, a baptism I was pretty certain I had been invited to, and several garden centres (if you’re not supposed to climb into the pond to touch all of the fish, there should be a sign).

Competitive multiplayer games aren’t much fun when you’re a blundering klutz, but co-operative multiplayer games are a special kind of nightmare scenario when you’re always the person whose incompetent floundering loses the game for everyone. In Unrailed, each of the four players assumes a role in ensuring the train doesn’t whizz off the end of the tracks. There is a single bucket, an axe and a pick to wield. These are used, respectively, to extinguish fires, cut down trees and break rocks. The wood and stone that fall on the ground must be collected and placed into a special wagon, which converts the resources into fresh segments of track that you can plonk down in front of the rolling train again, just like Gromit laying down tracks during the climactic chase scene in The Wrong Trousers (or just like some other thing, if you didn’t grow up in the 90s).

Your team’s train never stops trundling from left to right across the endless blocky landscape, so it’s a race against time to procure all of the wood and stone needed to make more track, and to clear a safe and direct path through mountains, forests and lakes. With four players working together in some semblance of harmony, it’s just about possible to keep everything ticking over nicely. One person mans the pick, another takes the axe, another is in charge of loading the resources into the supply wagon and laying down more track. One more player just sort of freewheels about the place, ferrying water from lakes and rivers to douse the train when it catches fire, or doing whatever needs doing from moment to moment. This game is 10 percent Lovers in a Dangerous Spacetime, and 90 percent Crossy Road. 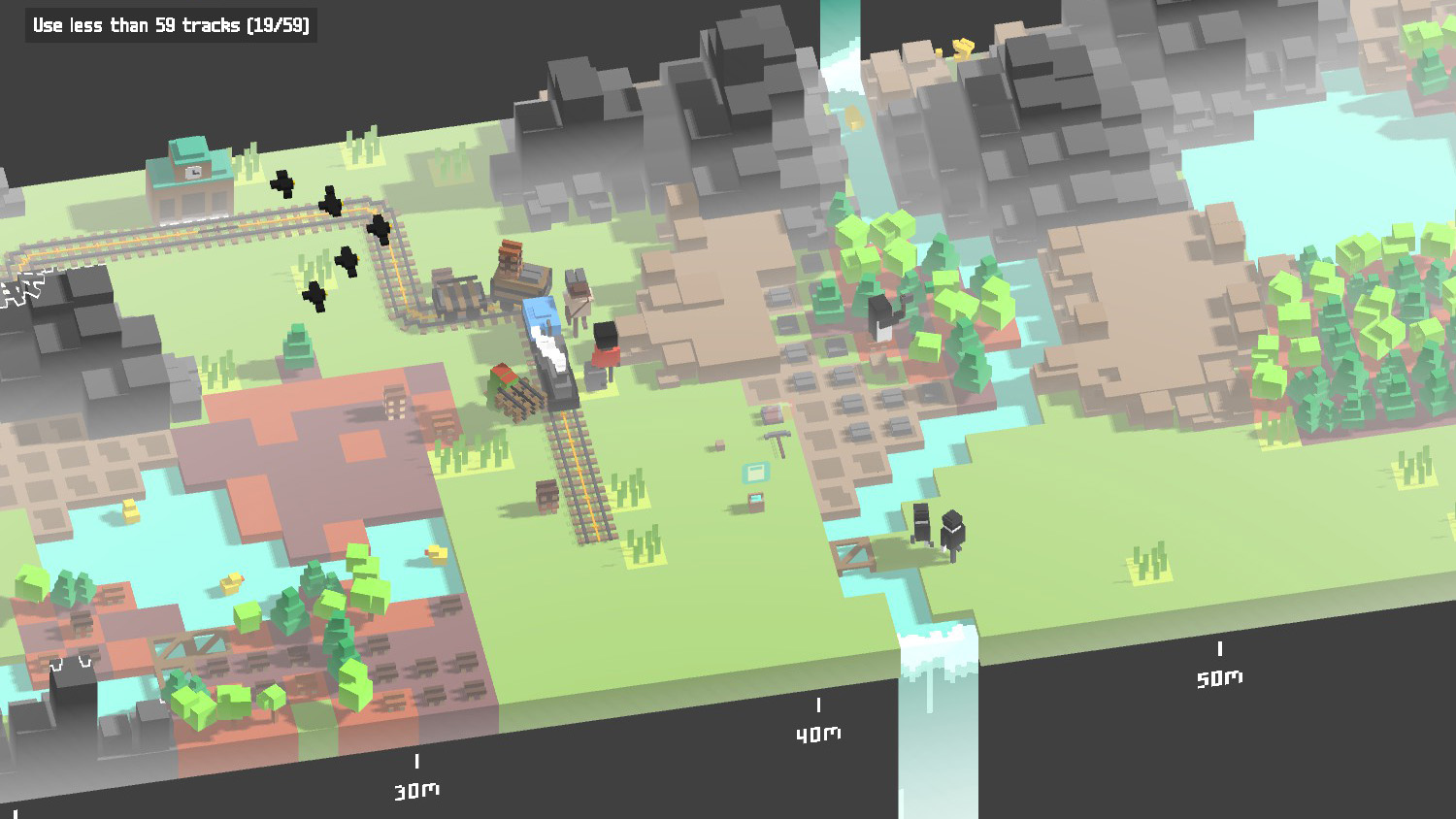 At the end of each stage, marked by a station that you’re aiming to reach, you get the option to upgrade your train with various new parts, or to progress to a new biome with a more challenging geography. The supply wagon can be upgraded to hold more wood and stone, and the track building wagon can be upgraded to build track more quickly. In the versus game mode, two pairs of players are running two separate trains, and can load a piece of wood or stone into a cannon that, when launched at the opponent, makes the blasted train go faster for some reason.

It’s good fun, and what seems at first to be a straightforward setup gives rise to some unexpected speed bumps and challenges. Players can accidentally obstruct one another in one tile wide corridors, for example, so constructed bridges and channels cut through mountains need to be at least two tiles wide to allow for every player to easily whizz past one another on their errands. The train itself can block players off from where they need to be too, especially as it can grow larger after each stage, so attention needs to be paid to the route the train is taking and whether it could block off access to the vital resources needed to keep producing more piece of track. 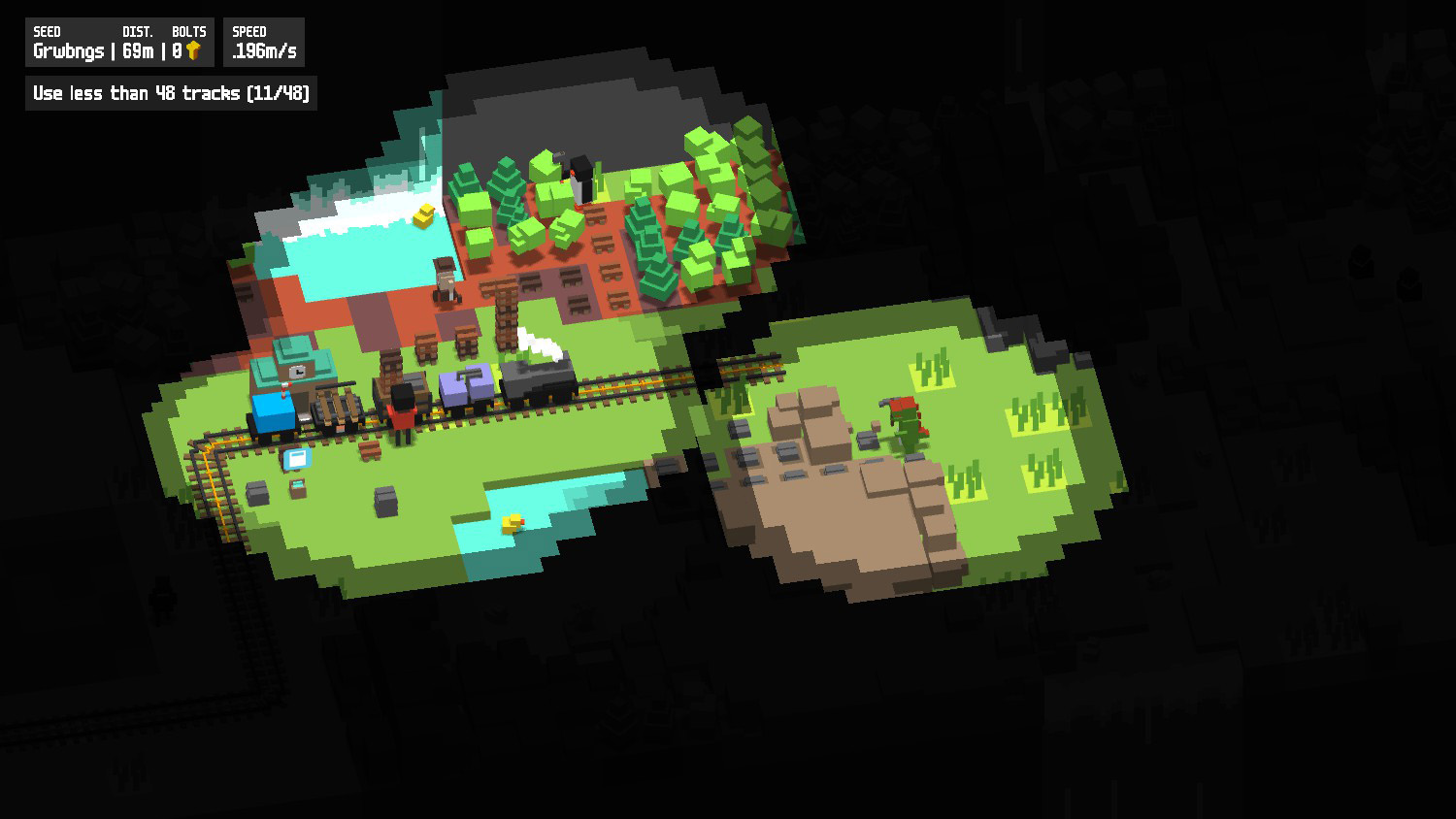 Leave the only pick behind on the far side of a carved out tunnel as the train enters it, like I did, and you’ve gone and lost the game for everyone, you enormous doofus. Then it’s angry emojis all round as everybody’s little avatars run away from you back at the menu screen, fleeing into some other lobby whose code they refuse to tell you, to be around a more competent and handsome fourth player. “The last guy we were playing with was a spectacular disaster,” they would communicate to their new buddy, somehow, through a series of meaningfully deployed and devastating emojis. And you'll sit alone in the blue void of an empty co-op session, nursing your bruised feelings and wishing the internet had never been invented.

Like every grown person, I see my actual friends roughly once every fifteen years. When we get together we’re only allowed to talk about pensions, politics and the various ways in which our garbage bodies have begun to decay, which leaves precious little time for playing four-player co-op games about laying down train tracks forever. But couch multiplayer is obviously the ideal way to play Unrailed. Not only is it difficult to actually find people to play with online right now, but you can more easily communicate resource needs and warn of impending bottlenecks when you’re sitting inches from your fellow players. 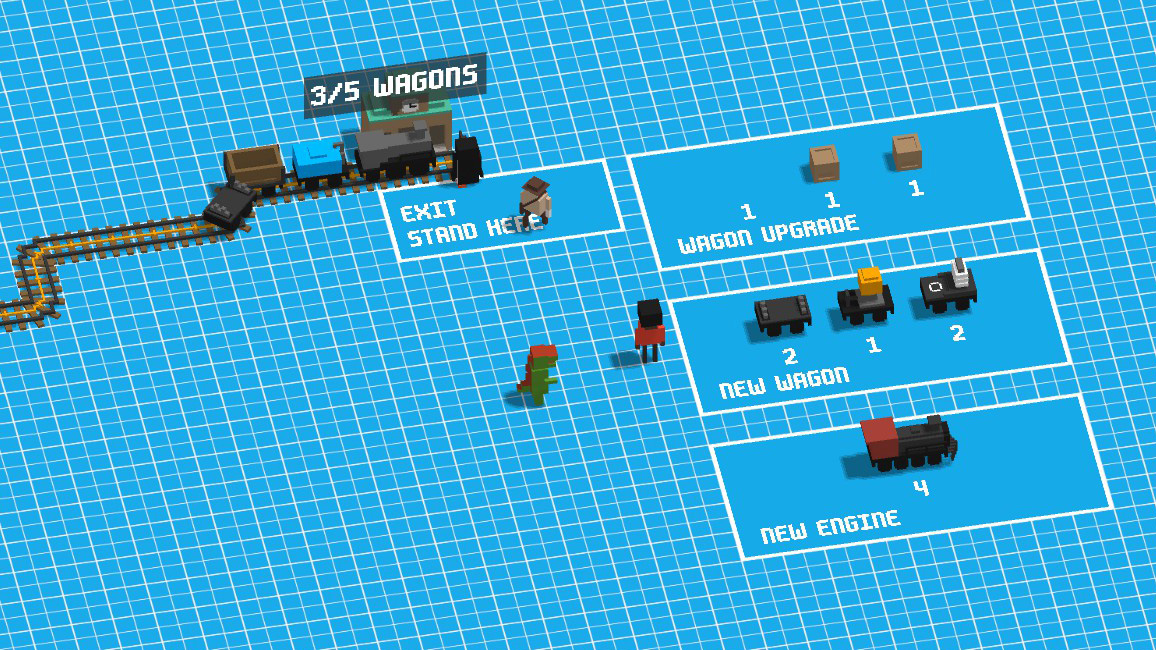 And because your closest friends and loved ones will have built up a healthy tolerance to your rank ineptitude over the years, they won’t be even slightly disappointed when you predictably mess things up by sending the train the wrong way. And if they are disappointed, they’d need to physically leave your house to get any distance from you.

A few other elements pop up that make this kind of in-person communication that much more crucial too, such as train robbers who’ll swipe things from your supply wagon, a day and night cycle that obscures parts of the world, and herds of cows that block the track and can be convinced to disperse using dynamite.

There’s enough here in the early access version to keep a couch-bound quartet of pals occupied for a short while, but more features need to be introduced before Unrailed becomes a good enough excuse for four adults to get together in 2019. Not when we all have children and jobs and a swelling sense of despair to manage, no siree.