If you click on a link and make a purchase we may receive a small commission. Read our editorial policy.
Valorant review
A mash up of CS:GO and Overwatch, which is great when people aren't being dicks.

Valorant is Riot's newfangled hybrid of CS:GO and Overwatch, where teams of five run around shooting very deadly weapons while deploying character-based abilities. It's very, very similar to CS:GO, right down to the round structure and individual weapons. If you've ever defused a bomb in Counter-Strike, there's a good chance you'll already be a crack shot here. It's basically the same, but with more mind games and novel situations thanks to those abilities.

It's a great game, but playing by myself makes me miserable far more often than it makes me happy.

That misery comes in two flavours. I'll quickly cover misery-lite, because it's simple: playing against people who are better than you sucks. That can be true of anything, but it particularly sucks here, where it often feels like your murderers murdered you simply because they had better and faster aim. Getting clever with abilities can only help you so much, as the winner of most shootouts will still be whoever can shoot sharpest. There are ways you can improve quite quickly, and I cherish the occasions where abilities DO let me get the better of my betters - but the reality is that a lot of the people you're playing against will probably have had much more practice, and overcoming that can be a nightmare.

I'm basing this review off my experiences with the beta, as the release version isn't wildly different - there's an additional faster-paced mode, one new map, one new hero and some balance changes. In the beta, at least, being shot to pieces by Counter-Strike veterans was a real problem. 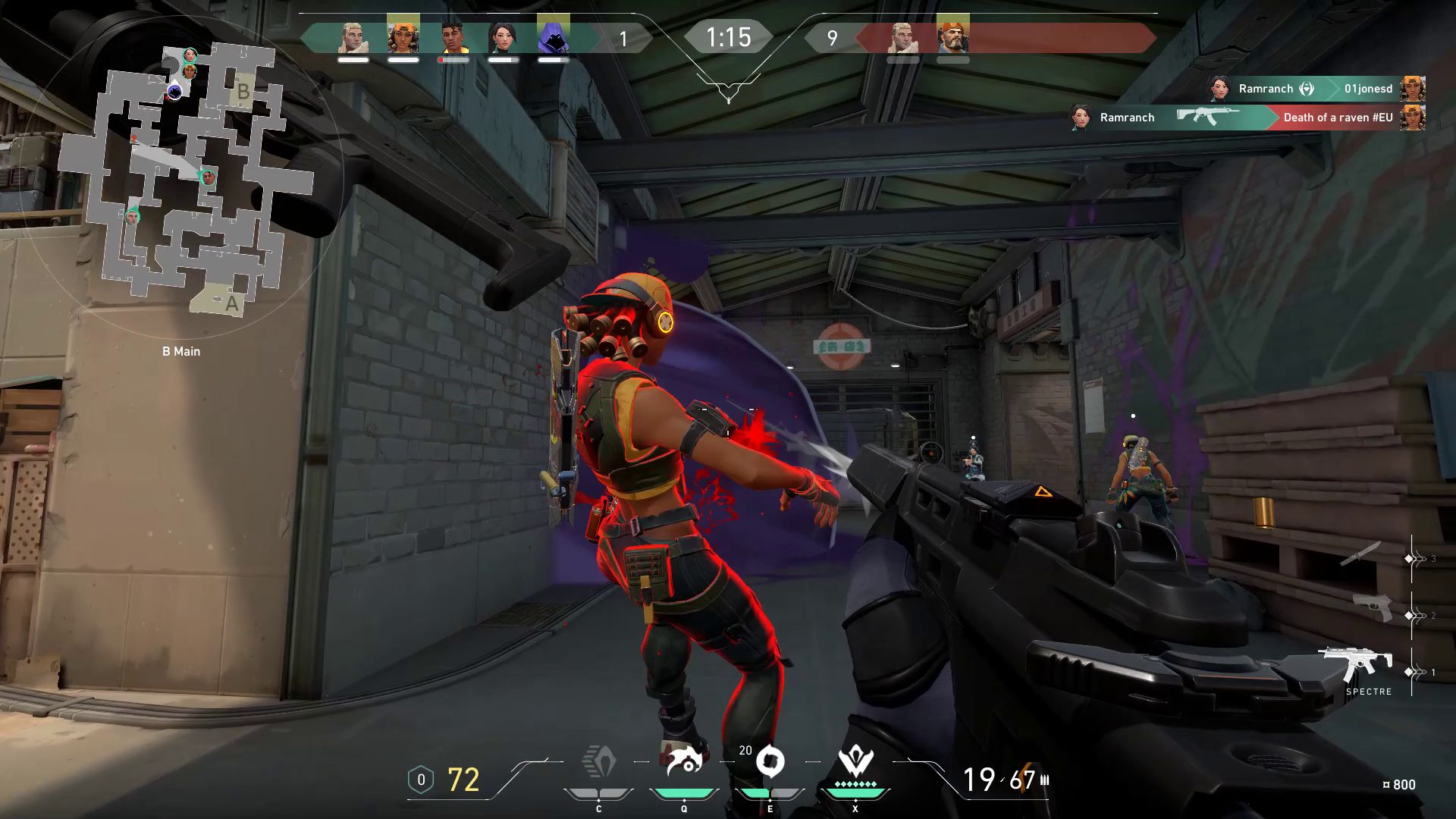 It's very easy to feel helpless. Victory goes to whichever team manages to first win 13 rounds, which work exactly like in CS: one team attacks, attempting to plant a bomb and defend it until it goes off, while the other team tries to stop them. You buy weapons at the start of each round, and get to keep your old one if you survive. Again, just like Counter-Strike, figuring out how best to spend the money you earn through kills and objectives is part of the fun. Matches usually last around 30 minutes, though, and that's a long time to be trapped - especially when you're trapped with arseholes.

I was usually trapped with arseholes.

This is where the full-fat misery kicks in, at least for me. My tolerance for being shouted at or repeatedly insulted in multiplayer games has become next to non-existent, and towards the end of the beta this happened in the majority of my matches. My last game particularly stung, because - for a change - I'd decided to be active and friendly over voice comms. 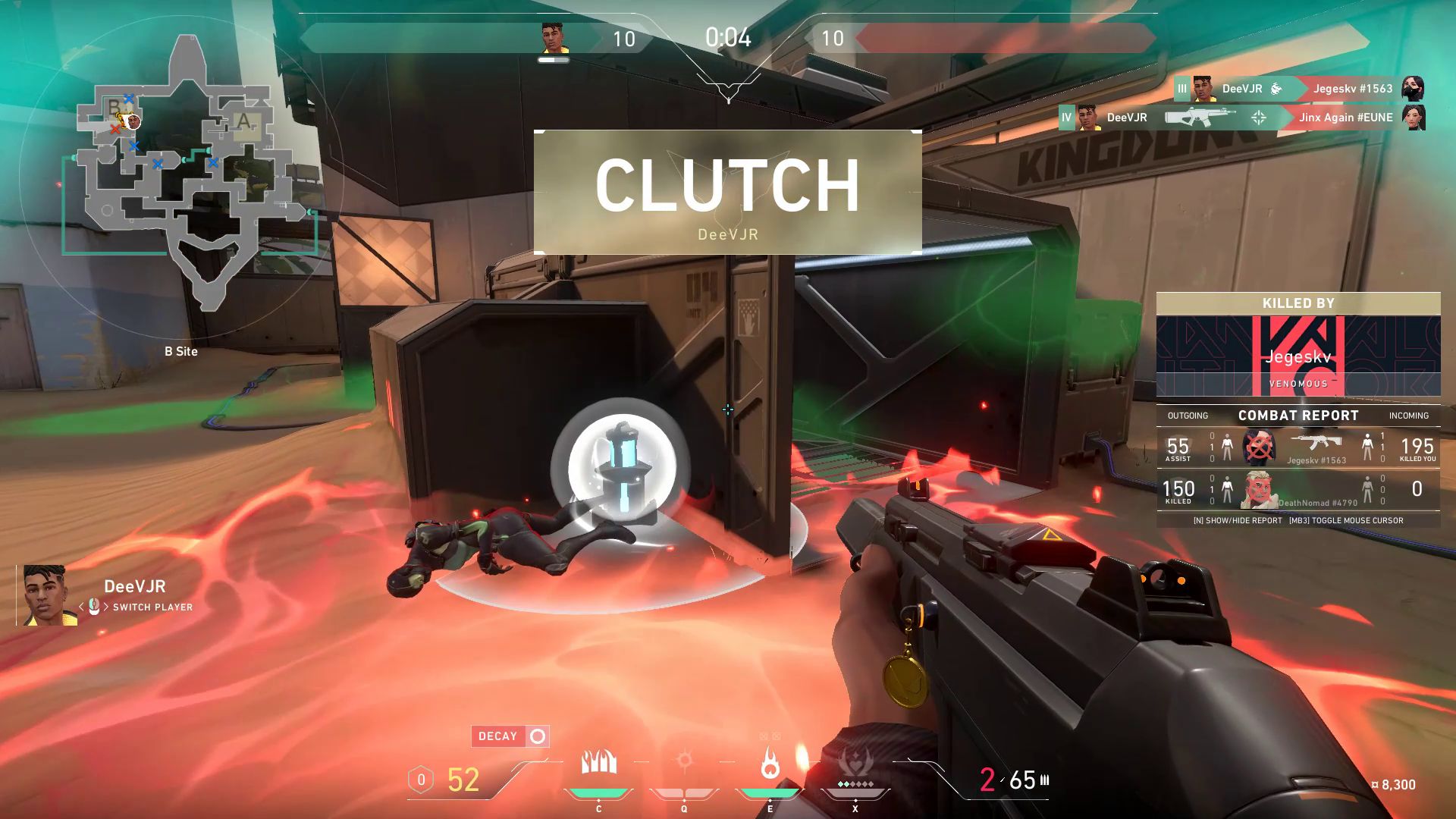 I congratulated people. I chatted. I even bought someone an expensive gun they wanted, because at that point I was comfortably doing the best and had loads of spare cash. Then someone called me a noob for doing that, and everything deteriorated. The next thing I knew I was the only one alive, left to defend a bomb that had already been planted. I bagged one of my two opponents (just about), and began approaching the bomb site cautiously. I then got shouted at for going too slowly, resulting in me fluffing my shots when my foe popped out of the spot where I suspected they might.

I tried explaining the shouting wasn't helpful, and got insulted some more. Then I spent the rest of the game with all my allies on mute, playing terribly because I'd been rattled. I'm well aware my skin isn't as thick as I'd like, and that you might be thinking that you'll simply shrug harassment off. That's fine, but I know I can't be the only one who plays worse when they know their every move is being scrutinised by dickbags.

Most matches aren't nearly as bad as that, but toxicity has still soured more of them than not. We're nearly 700 words in and I've spent most of them illustrating the problem, but that's because it's a big one. I have no desire to play Valorant by myself anymore, even though some of the good matches have left me feeling ecstatic. Toxicity isn't a new problem, and you might not find any of this surprising - but the issue dominates my current thoughts about the game, and it would be disingenuous for this review not to reflect that. 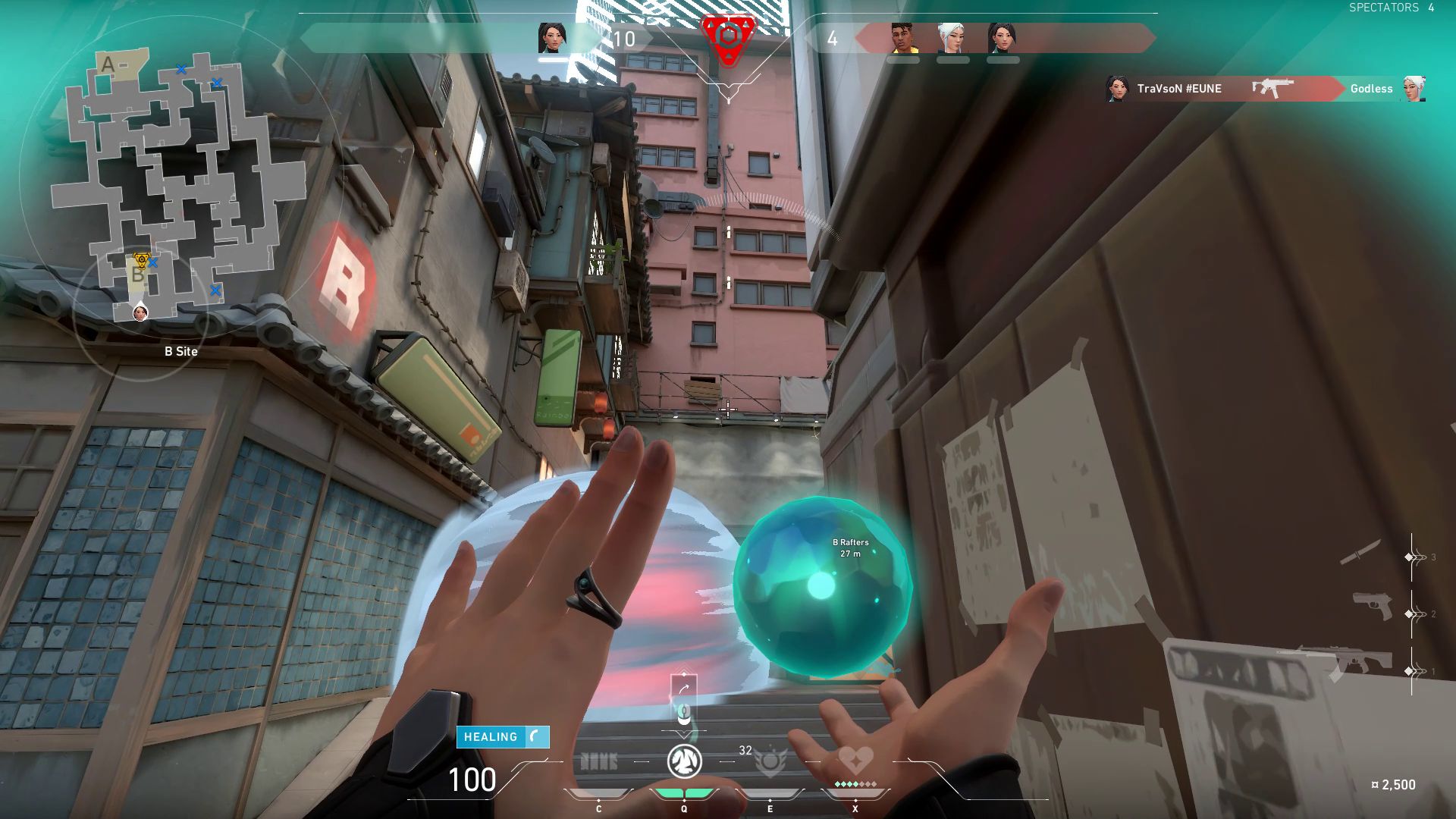 I've done all that now though, so let's pretend we're playing the best version of Valorant. The one where you're playing with a team of people you like, where you all learn and laugh together, and every insult is replaced with an "oof, hard luck". I haven't had a chance to play Val with more than one or two pals yet, but I can remember playing CS:GO with a full squad, and I'm confident this can capture the same magic. I remember the thrill of pulling off THE PLAN, and those glorious moments where you get to save the day while your dead, spectating friends cheer you on. The very same structure that fosters harassment is fantastic for showing off.

Valorant doesn't just have the potential to recapture CS:GO's glory days, though. It can go beyond them. I've already enthused about how much abilities bring to Counter-Strike's war table, and I stand by everything I said in this piece (apart from the very last line). Tricking people is one of my favourite things to do in videogames (second only to running away), and Valorant's abilities create some delicious mind games. 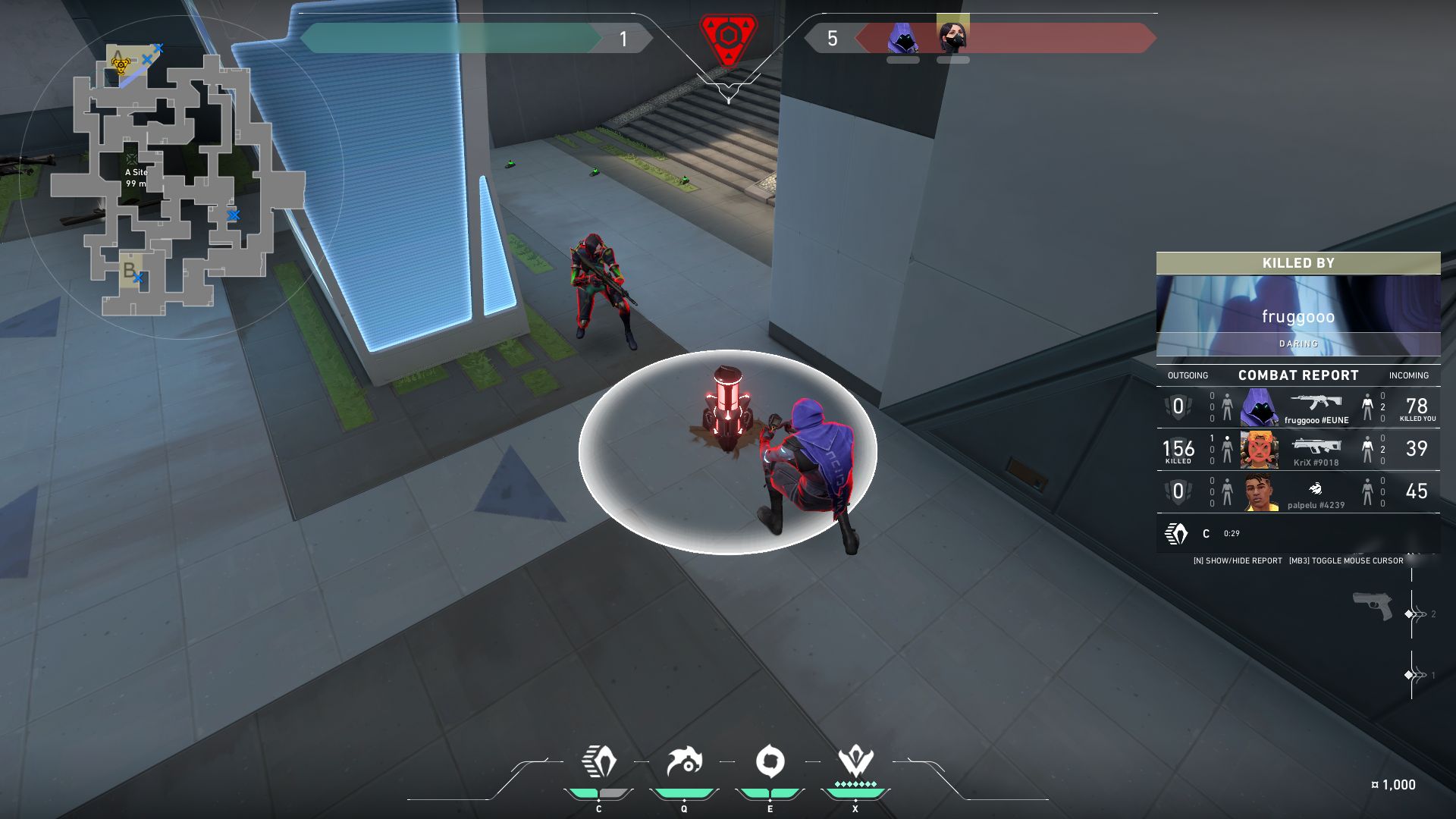 Just look at Omen. He trades in teleportation, and in the early days of the beta I could run rings around players who hadn't yet learned to listen out for the telltale sound it makes. I'm looking forward to the brief spell where I can zip around all the poor new people, but I'm looking forward to what might come after even more. I suspect competitive Valorant can reach heights that right now I can only squint at, where my plans shift based on what I think my opponents think I might be thinking. It's all about playing with expectations, taking advantage of each character's toolkit. Omen can create a hollow dome of smoke, inviting you to teleport into it or out of it, and to shove your opponents into a state where they can't predict where you'll come from. It's like if Batman had an AK-47.

The maps are good, too. There are only four (and I'm yet to try the new one), but they're varied, and demand that defenders spread themselves out differently. One map plays with one-way teleporters, while another offers the attackers a choice of three bombsites rather than two. You can tell a lot of thought has gone into their every minutia, with sight-lines that must have been pored over, and crevices that reward sneaky players with opportunities for ambushes. It's gourmet stuff. 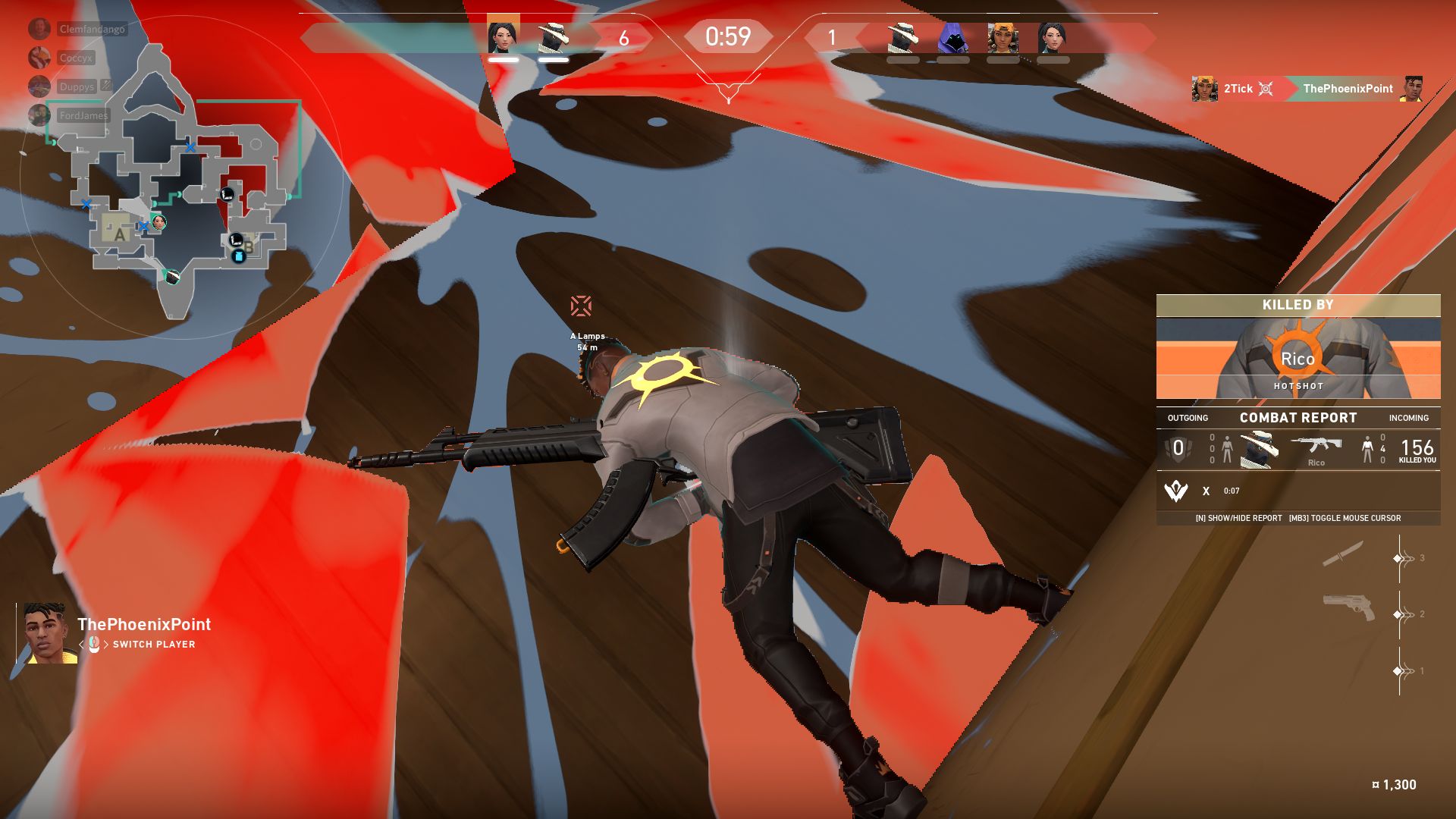 Here we are then. Valorant's gunplay feels just as weighty and precise as CS:GO's, with a structure that hits all the same highs and lows. Abilities sometimes let you outsmart people rather than simply outshoot them, and I'm excited about playing in a squad of friendly and coordinated pals. If and when they fall away, though, I expect I will too. Riot say they're taking toxicity seriously, and this is good to see. But they acknowledge they're fighting an uphill battle, and I'm not at all convinced they'll be able to foster a competitive environment that doesn't routinely make me miserable.

This launch week, though? When my friends are playing, and the game isn't dominated by people with far more experience than me? I'm going to have a blast.