If you click on a link and make a purchase we may receive a small commission. Read our editorial policy.
Developer: Draw Distance
Publisher: Draw Distance
Release: Out now
On: Windows
From: Steam
For:£15.50/€20/$20

It's probably difficult to know exactly how to do a Vampire: The Masquerade game. What proportion of your audience will come from the original tabletop game? How many are only familiar with Bloodlines? What if people only picked it up for the genre?

On top of this, Vampire: The Masquerade - Coteries of New York is a visual novel too, so who even knows what assumptions people will play it under. I think it'll be divisive precisely because of that, which is a shame, because I had a great time with it.

Vampire Colon Cooties is not an RPG. That's important. You'll get decisions to make, and they'll matter, but they won't drastically change what you see and do. Sure, you get to choose how to talk to people, and how they'll react to dangerous situations, but the only really meaningful decision is which of its characters you'll spend time with, as they dictate what subplots you'll see. 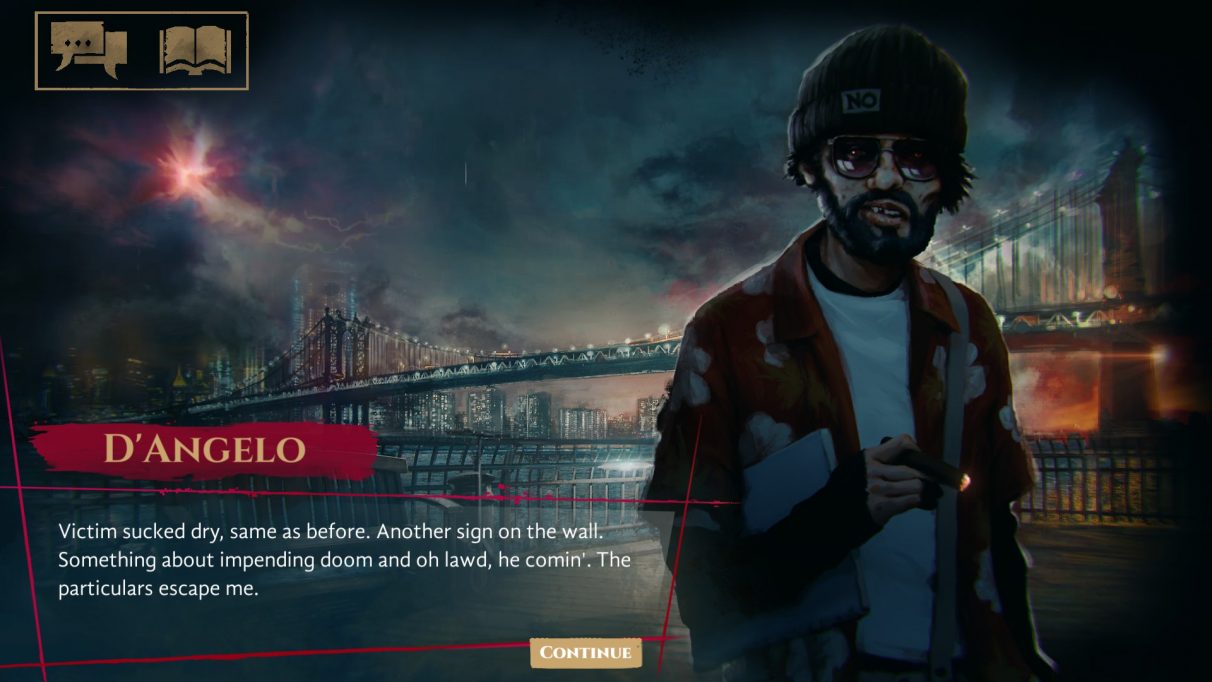 The basic story is that you're a freshly squeezed vampire dropped into the treacherous political schemes of some powerful players in New York's toothy underground. Whichever of the three pre-set protagonists you choose (the artsy Toreador, the snobby Ventrue, or the rebellious Brujah one I couldn't bring myself to play because he looked like such a douche), you'll be adopted by a local figure and, after an introductory chapter, instructed to put together your own 'coterie', the obligatory in-universe term for 'gang', or maybe 'network'.

It took me a while to realise it's essentially a dating sim VN, but with interesting stories and scheming instead of tsundere and transparent erections. Each night, you choose which character to pursue further. Finish their story and they'll become part of your network. They're not your friends, but they're as close as you can get in this world of backstabbing, murder, and obscure power games between ancient forces. Exchanging favours and co-ordinating against common enemies is how this vampire society operates, and that's something Vampire The Overtitled communicates particularly well. 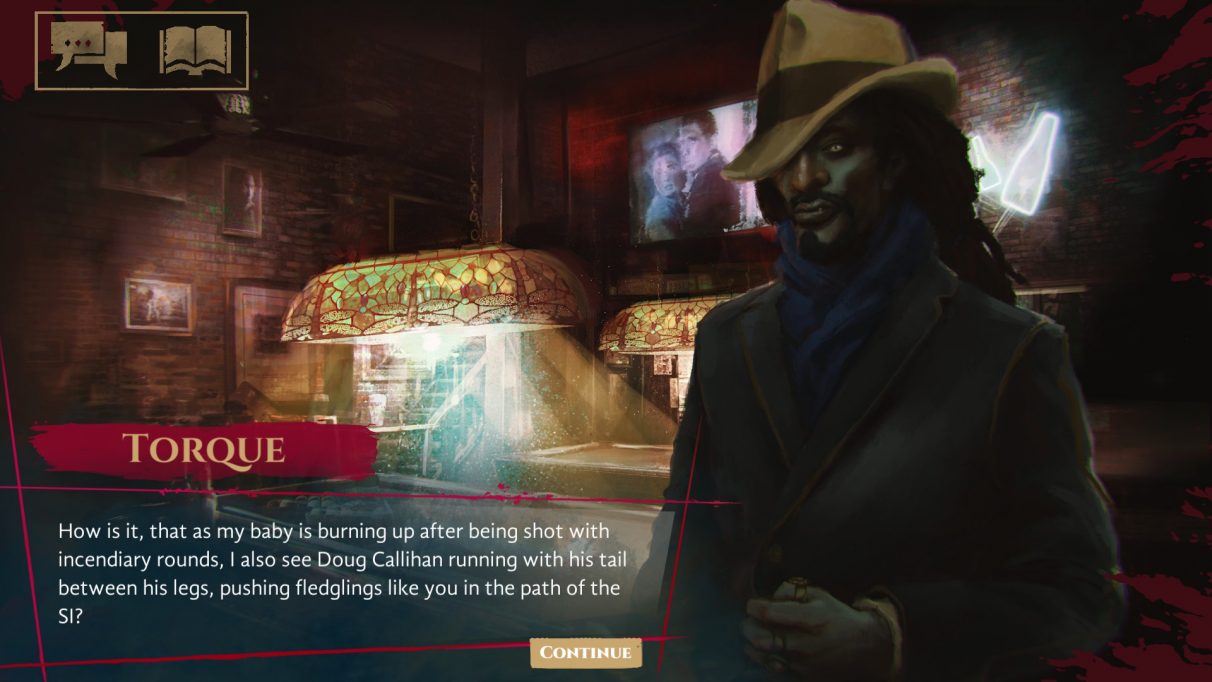 The main plot is comparatively weak, and most of it happens all at once in the final act (particularly if you didn't choose to spend time pursuing your warden's interests). It's also barely connected to the other stories in the game, which is disappointing. Still, I had such a good time with some of the side bits that I found it easy to forgive. The whole game is an excuse to play around with these characters, in a rich and complex setting that hasn't had a great deal of airtime on PC. There are half a dozen or so subplots, each primarily concerned with one person.

There's the one who eschews politics, and frets over religion and damnation instead, exploring the notion that vampires in this world are intrinsically tied to the Abrahamic faiths. Another likes to LARP as a gumshoe, narrating a noirish inner monologue under his breath (that one's a lot more entertaining than it sounds). 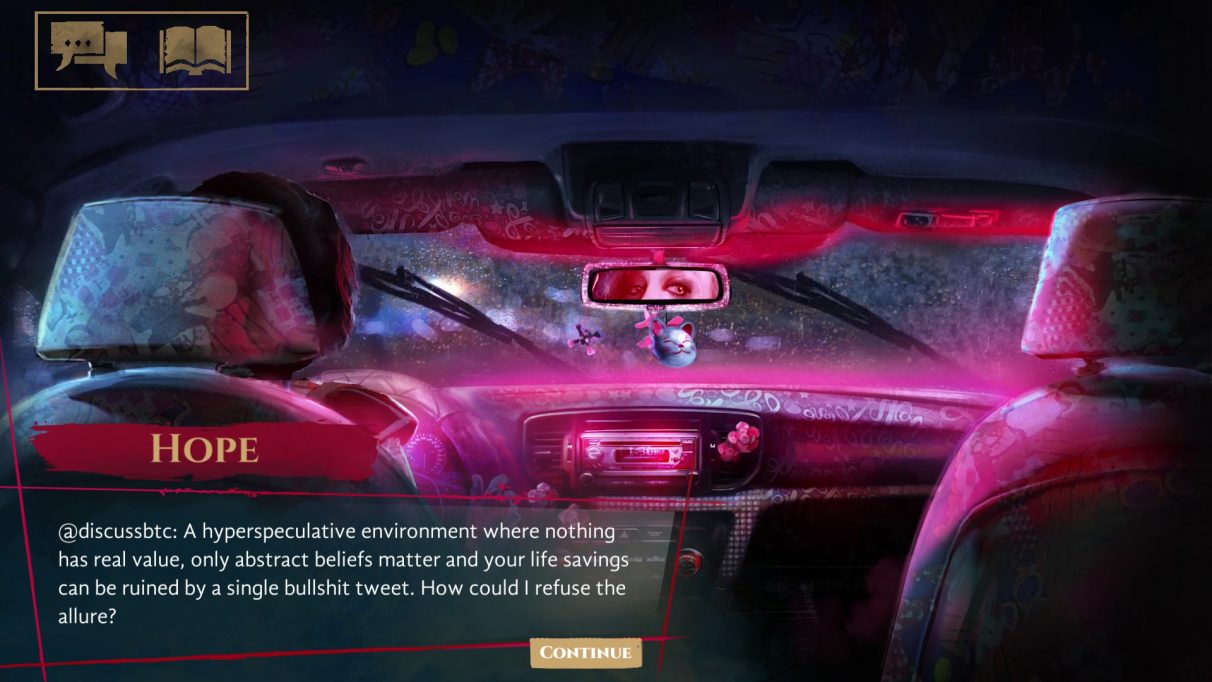 Hope is one of the people you can seek out. She's a Malkavian, meaning she was envampened by the clan typified by mental illness, atypical observations, and sometimes prophecy. And she is excellent. A young, alienated woman steeped in internet subcultures, taken by a clan that drives members mad, who stages erotic webcam shows? You can just imagine the absolute shambles most games would make of that (even Bloodlines has aged poorly in this regard). But where most writers would have made her "damaged" and self-loathing, cheaply exploitative with a veneer of Strong Female Characters deniability, Draw Distance have made her wry, self-reliant, and simultaneously sincere yet irony poisoned in that extremely online way. 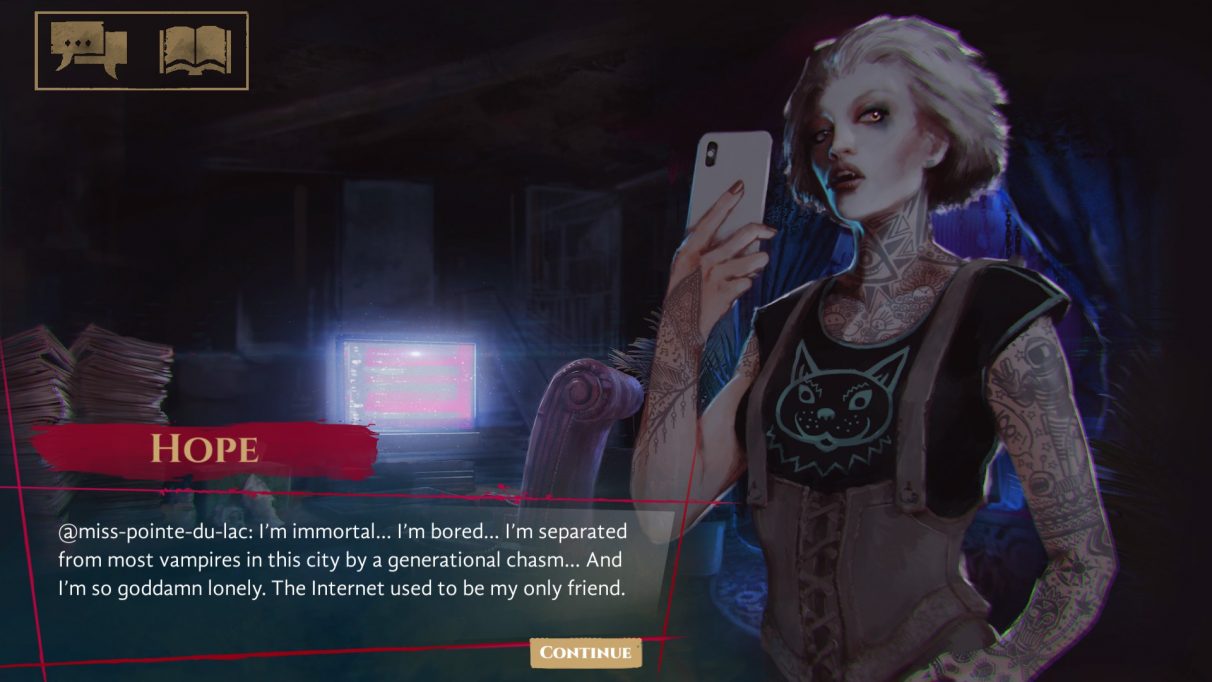 Her main conflict is a fascinating dynamic where a local bougie entrepeneur insists she should stop 'wasting' her talents, and basically join the establishment. But as Hope points out, the establishment doesn't give a shit about her: it's made up of hypocritical old vampires with no understanding of what's really happening in the human world, and no idea that the internet is far more radical and transformative than a mere business opportunity. When that same person calls her tech business "punk" and tries to sell the line "I'm all about disruption", I actually shuddered, and swore aloud at my desk.

Hope's alienation, her political anger, her subversive performance art, and her references to less obvious points of interest (she constantly generates usernames like "malkdavidchapman" and "Goatseintheshell", calls someone a "press sneak fuck", delights in scamming bitcoin tools, and enthuses about Anna Sorokin. I'm a bit in love, it's pathetic) make for a brilliant exploration of the themes in the World of Darkness setting, and show why it's such a relevant one for the modern age. This is some great, great stuff, and it's clear the writers were having a lot of fun. 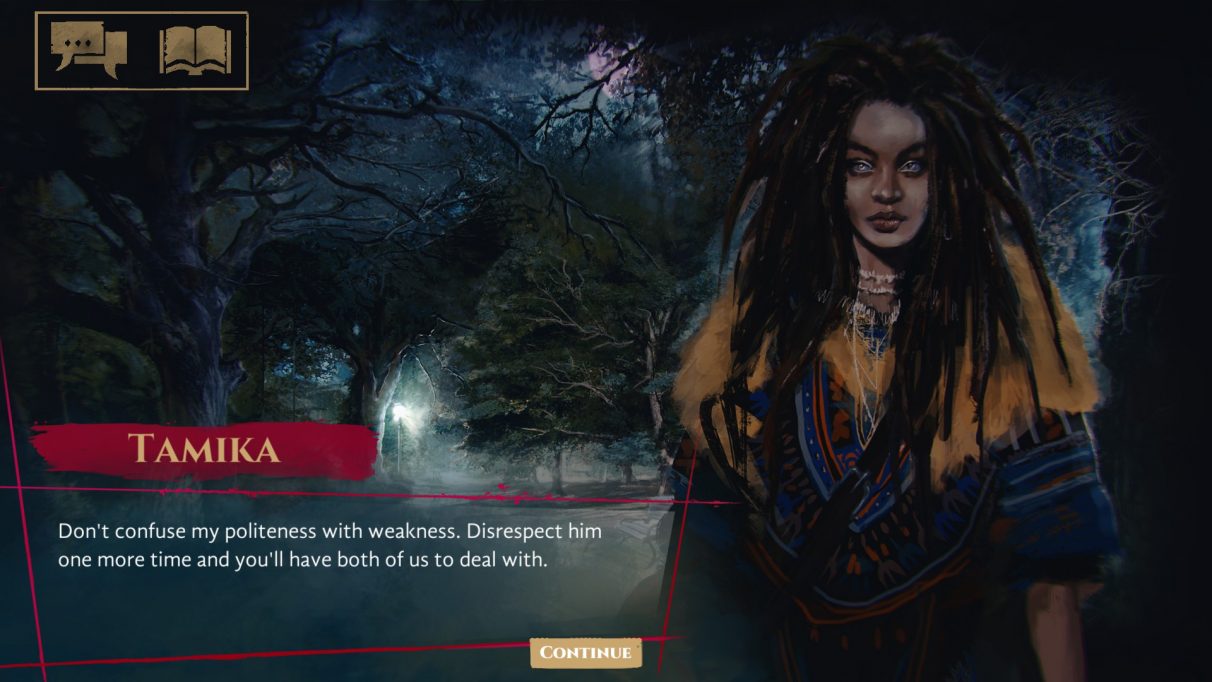 It does, of course, go wrong here and there. Although all the stories are well written, Vampire Subtitle Punctuation Etc makes some typical slips in communicating your choices. At one dangerous juncture I had options including "attack", and using speed-enhancing magic - but the latter was written as "celerity: try to outrun his gun". Uh... what? I'd absolutely use celerity to attack him, but outrun his gun? That seems really stupid. But then, I'm in danger so of course I should use my powers. But doing it like that seems like it'll... gah. In another scene, when I chose to say "I heard you're into anarchy", it became "heard this is the spot to meet hot chicks who hate the patriarchy. Anarchs, you could say". Eesh. I can call myself a wanker, game, it's much faster.

Far worse was a situation where I was expecting a long conversation, but my first choice immediately drew the whole scene to an extremely unsatisfying conclusion. These things happen, and I would normally make less of a fuss, but for the literally incredible one-two punch that Coteries somehow manages to land on itself: It autosaves at every line, with no manual saving. And you can't skip through already-seen text.

You can't save the game and you can't fast forward.

Look, I may moan a lot, but it's deceptively rare that I go full Lemongrab. This is bad. It's shockingly bad design, and inflates forgivable errors into total fun-killers. I'd like to explore a few alternative options, particularly late in the game, but after playing through two and a half times already, I'm not prepared to sit here pressing enter thousands of times, and hoping I don't accidentally press it once too often and have to start again. I even tried for a minute or two anyway, making this the first vampire game to truly confront me with my mortality. 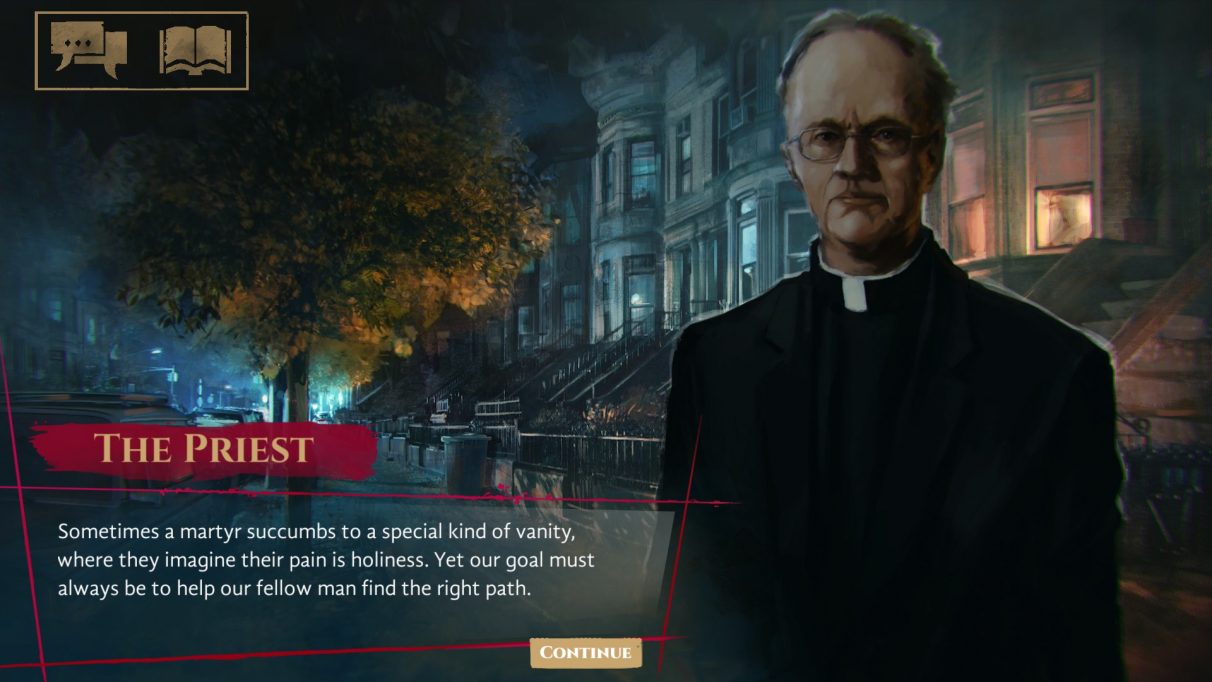 There's also no option to hide the dialogue box. This isn't as big a deal, but it's a shame to obscure the artwork. Backgrounds are slightly animated, with shifting clouds, silhouettes, and some excellent lightwork bringing a tonne of atmosphere to a setting that demands it. Both it and the music are fittingly moody, but I liked that the tone was grounded in people with complex feelings, elevating it beyond the depressing hatefest it could have been.

Some players will be annoyed that you have little effect on the story, and while that's valid, I think it kinda works on a meta level. I was annoyed by a late section where the game kept wagging its finger and punishing me for not feeding, but I hadn't been given an opportunity to feed for several days. In theory you can feed at certain points, you see, lowering your hunger and thus the risk of going feral, while at others you can use vampire powers to fight or manipulate people at the cost of more hunger. But screwing up happens in the script, whatever you do. On reflection I think it's messing with you. You are a pawn: that's the point. You're not an unusual special fledgling who survives remarkable things through contrivance. There's no war brewing or apocalypse looming. It's just business as usual. Even with all that in mind, though, it's not without its friction, especially with that atrocious save system. 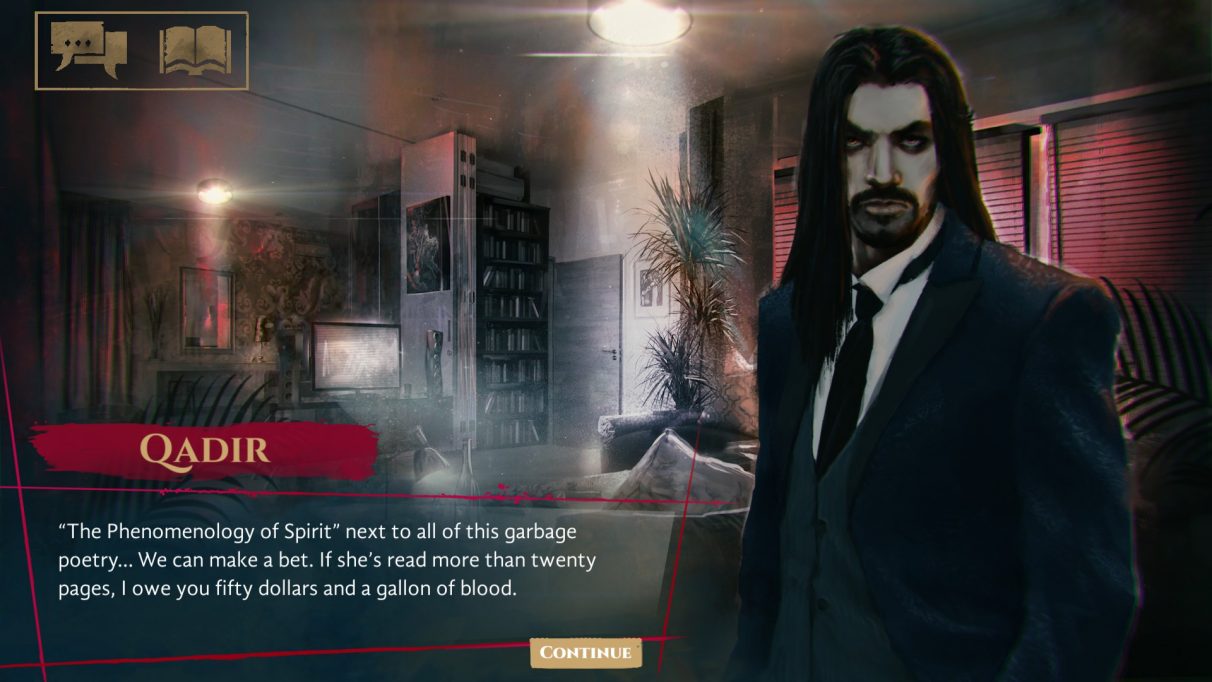 It's hard not to keep coming back to that. Should a patch fix the saves, or at least the skipping issue (and it bloody should), I'd recommend this one, with the caveat that it's no RPG. Vampire: The Masquerade - Coteries of New York is essentially a collection of subplots for their own sake, largely set in stone. But they're written with talent and confidence and I would gladly read some more.