If you click on a link and make a purchase we may receive a small commission. Read our editorial policy.
Premature Evaluation is the weekly column in which (normally) Steve Hogarty explores the wilds of early access. This week he's on his hols, so Brendan is boarding the drilltrain of survival-'em-up Volcanoids.

Volcanoids sounds like a rude illness you need to buy cream for, but you’re too embarrassed to ask the lady in the pharmacy because she knows your mum and even though your mum has seen you in every state of undress and infirmity you still can’t let her know you’ve got Volcanoids because you’re a grown-up for heaven’s sake, you’re a grown-up, why is everything so difficult. Hello, I’m Brendan. Steve can’t do Premature Evaluation this week, so I’ve been playing this singleplayer steampunk survival game. It’s fiery and messy and still needs a bit of treatment.

You’re a lad from an island which has been taken over by volcano-loving steambots. Your job is to take back control of the island by finding exactly out what’s causing all the recent volcanic eruptions, and put a stop to it. These volcanoes aren’t just spicy flavouring either, there is a timed eruption every 20 minutes that covers the island in dust. After an eruption, the world becomes a grey ash-filled place, and it only returns to its former green state over time. If you’re caught in the blast, you die, game over. 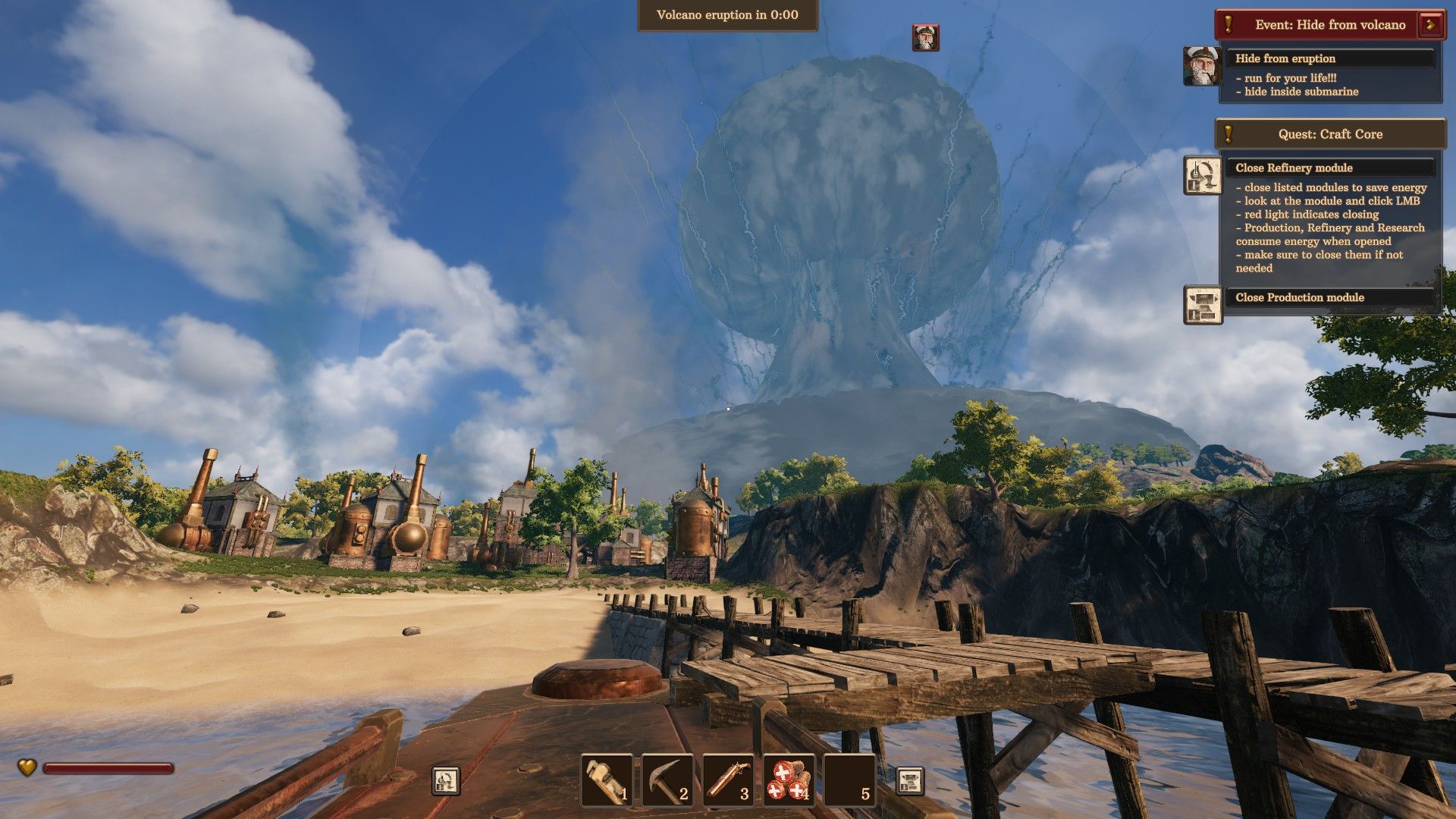 Much of your time is spent in the fresh air on the surface, mining copper and coal deposits for base materials as the clock runs down. But when this volcano countdown timer reaches its last minute, you’re warned to take cover. That means climbing aboard your starting submarine and closing the hatch, or better yet, stepping into a big “drillship”. 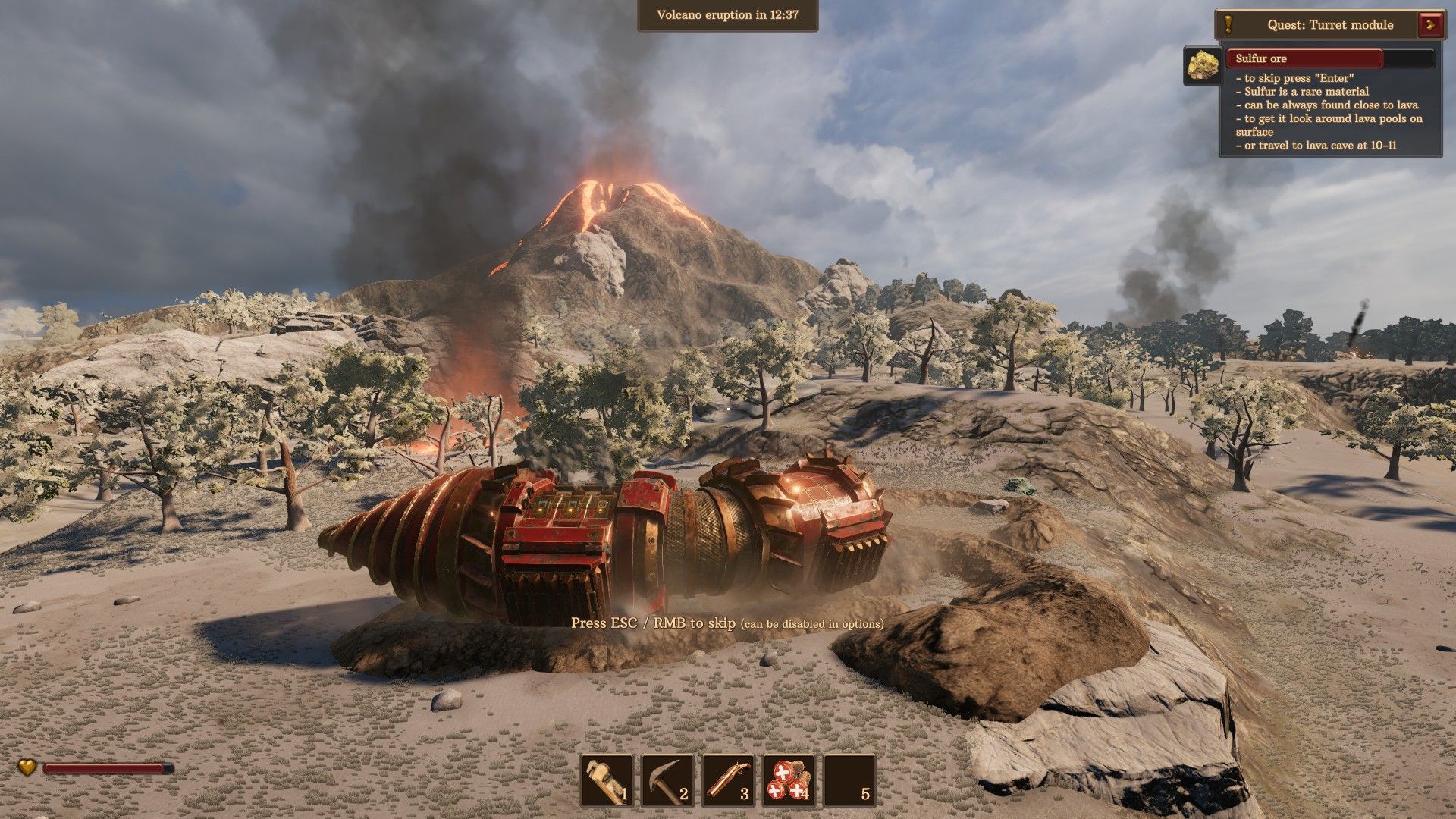 This ship is a moving base. It can’t be driven exactly, there’s no wheel to spin or windshield to wipe. Instead you use a machine to choose from 37 different points on a map, then pull a lever marked “travel”. Or if you want to bury your ship on the spot without re-surfacing anywhere, you pull a lever marked “go down”. This is useful for quick escapes from impending eruptions, burrowing into the ground like a big metal snake. Otherwise, it’s a big toasty network of stops buried in a glowing, lava-filled island. Like the Central line on the London Underground, but not that warm.

Still, it feels exciting to have a base that moves around, and there is that familiar DIY joy of building workstations and doorways in exactly the spot that seems right for you, arranging your new home according to the maxims of survival game feng shui. The lockers in here shall contain coal and copper and sulphur, it’s the elemental carriage. The lockers over there shall contain repair kits and other mechanisms, because it's the engineering carriage. This feeling of creating your own home is powerful and unmistakeable. If a survival game can get this right, it has promise. 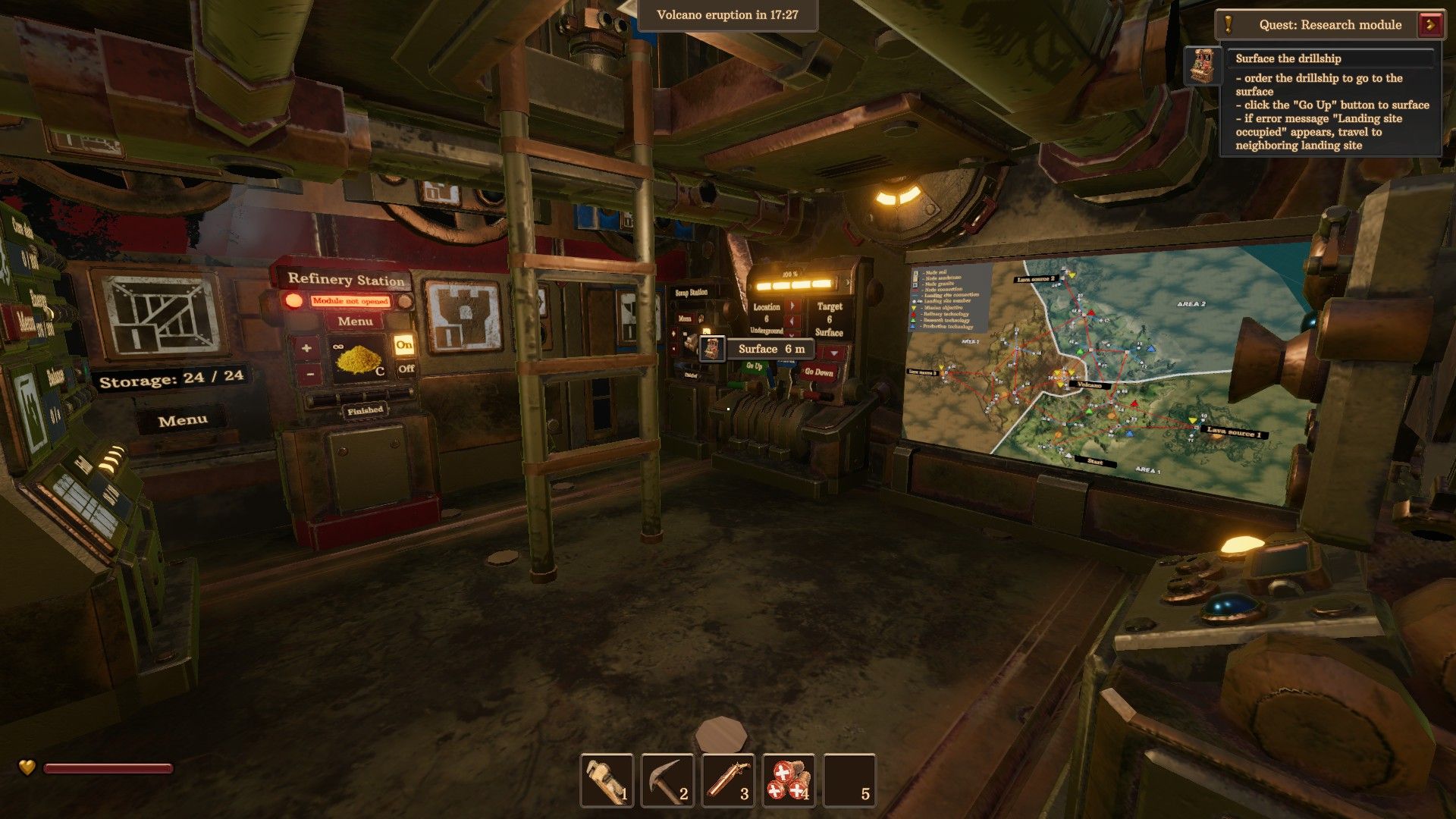 There’s also a periscope. Sweet. This lets you look out upon the landscape before surfacing. But the childlike joy of this device is weakened when you realise the rest of the world is fairly barren and skeletal. The only thing to check for through your periscope is the same few baddies, all of which will be quickly dispatched by your ship’s turrets as soon as you surface (you're taught how to build these turrets within the first hour). So the novelty of checking your surroundings through the periscope (or watching the volcano explode from the safety of the dirt) soon wears off when you realise there isn’t much to fear from heading topside. 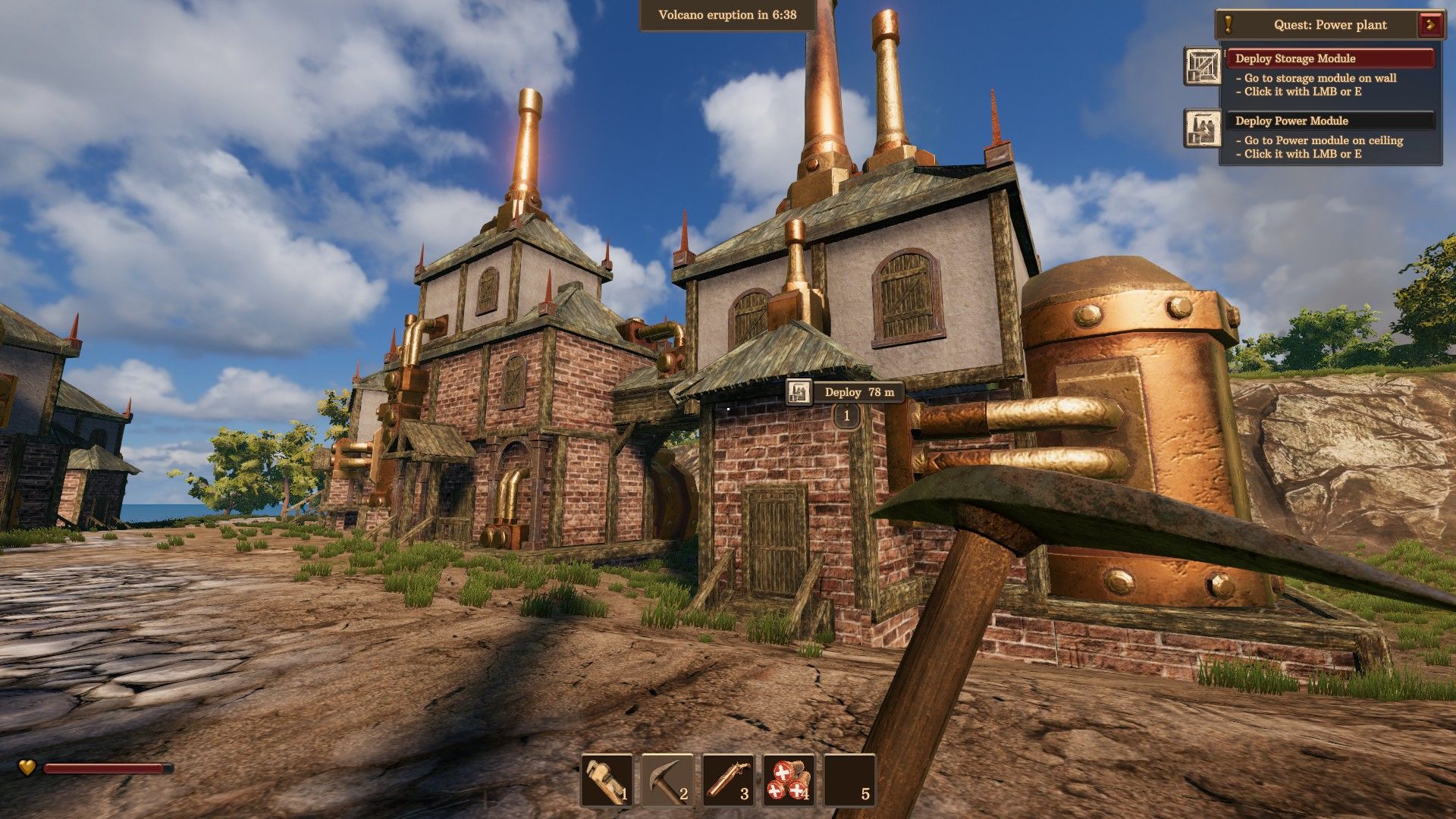 Part of me hoped that this would do for the lava level what Subnautica did for the water level. But it’s clearly not quite there yet. Aside from lava pools and caves (more on this in a minute) there are some villages with shoddy looking houses to explore. You can’t enter any of the buildings, however, and many of the houses feature a front porch that is either clippily buried in the ground or floating mysteriously above it.

There are plenty of more jarring bugs, including game crashes and enemies clipping through mounds of earth. In one instance, I fell through the jagged geometry of an underground cave into a smaller, worse cave. There was no escape except to re-load. This is early access, yes, we were warned, blah blah blah, but there is a roughness here that sometimes takes the biscuit. With many early access misadventures, you can lock away in your mind that this is a work-in-progress. The worst bugs will often take time to accidentally discover. Here, the roughness is palpable. It sometimes feels like you’re in the studio, doing quality assurance. 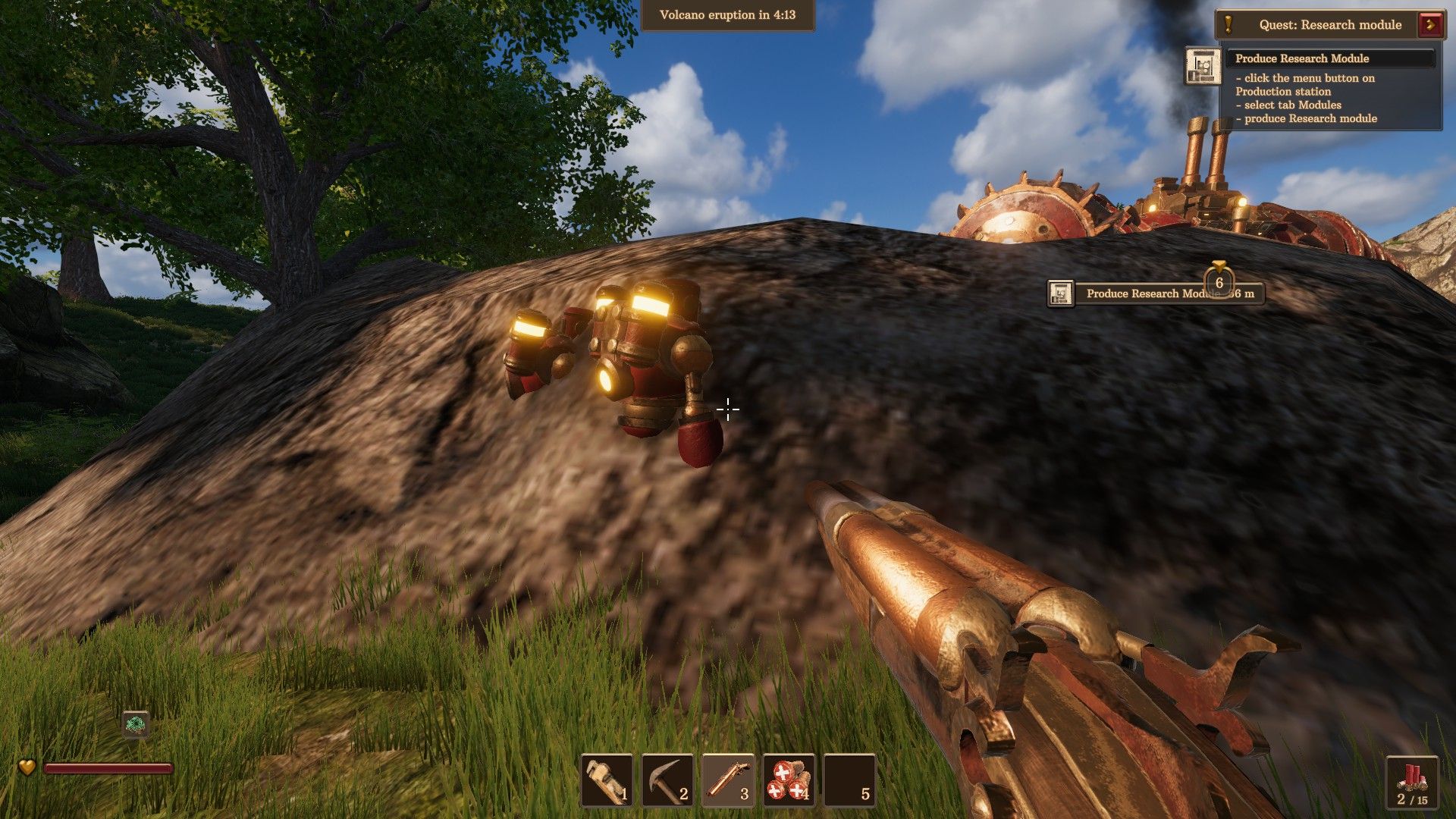 Anyway, those villages will sometimes have a new part that you can bring back to research, which improves the machinery on board your soiltrain. But most of the time your outings are seeking the same three elements: coal, copper, sulphur. Your refinery makes powder from raw sulphur, which you need to make turret bullets and shotgun shells. Your whole ship is powered by coal. And copper is needed to make the bolts, plates and tubing necessary for almost everything.

You can build “breach” kits to patch up a broken wall in the ship. Or floor pieces and ladders that can create extra levels in your roomier carriages. But it all comes down to collecting those resources and setting up production queues. Yes, that old hierarchy of matter is here too, ruling over everything with an iron fist (then a steel fist, then a diamond fist). This isn’t really a bad thing. It just feels very limited in the current build, not to mention overly familiar. 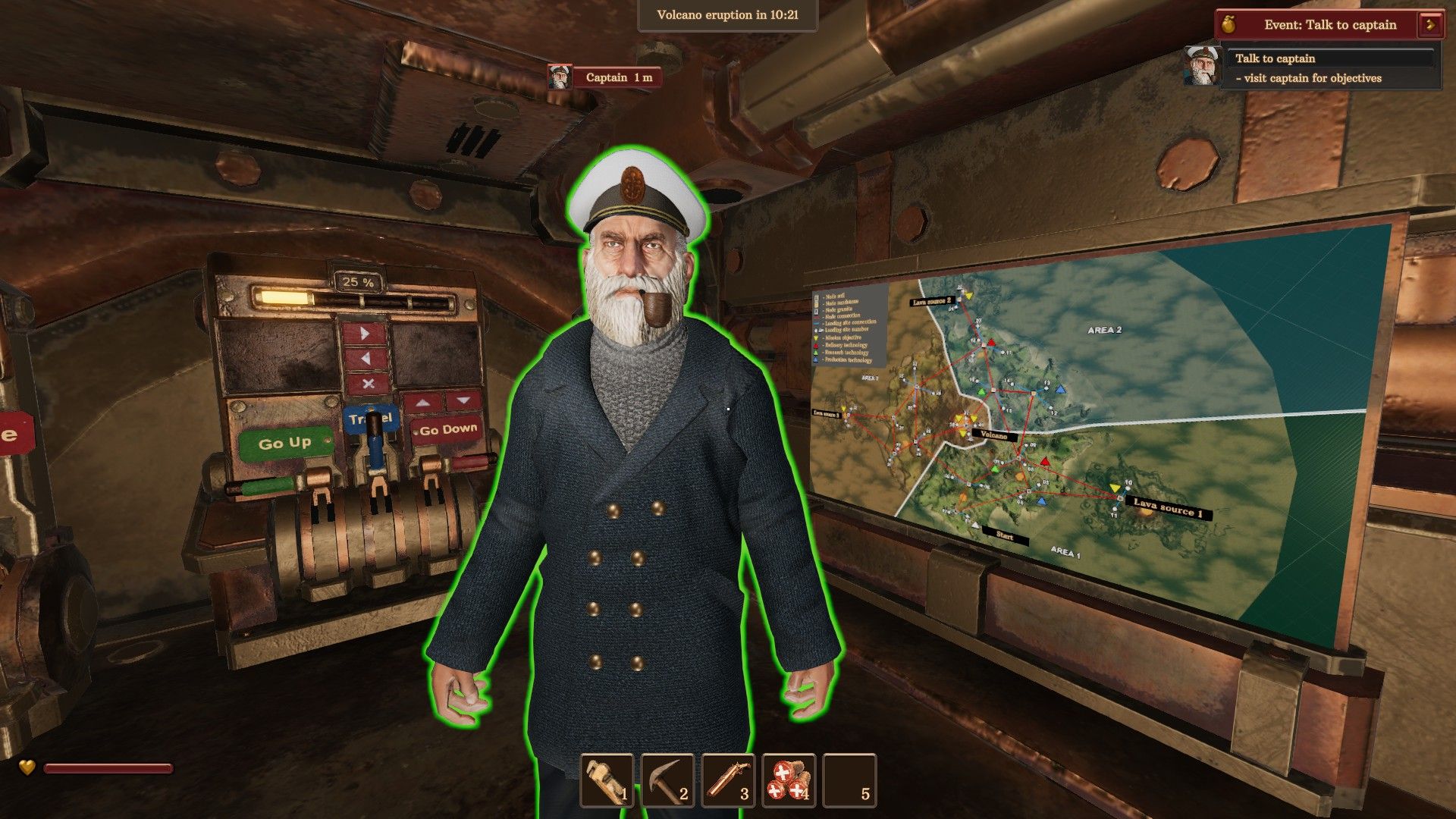 So that’s the game. You travel around map, seeking fossil fuels and other gear, upgrading your ship along the way. There is also your mission to fix the over-heating island. This involves going to enemy-controlled caverns in different parts of the island. It turns out steampowered lasers are causing the eruptions. Which means descending into the robots' caves and assaulting the lasers themselves.

Sadly, these subterranean raids are dull demolition jobs that involve spamming a few grenades at bits of machinery until there are no more bits of machinery. There still seems to be only one species of robo-foe, and they're neither a challenge nor are they very fun to kill. A single headshot with your shotgun. I've seen a green-coloured version of this bot, which suggests there are more, colour-coded for toughness. But this doesn't shake combat up beyond making you reload more often. 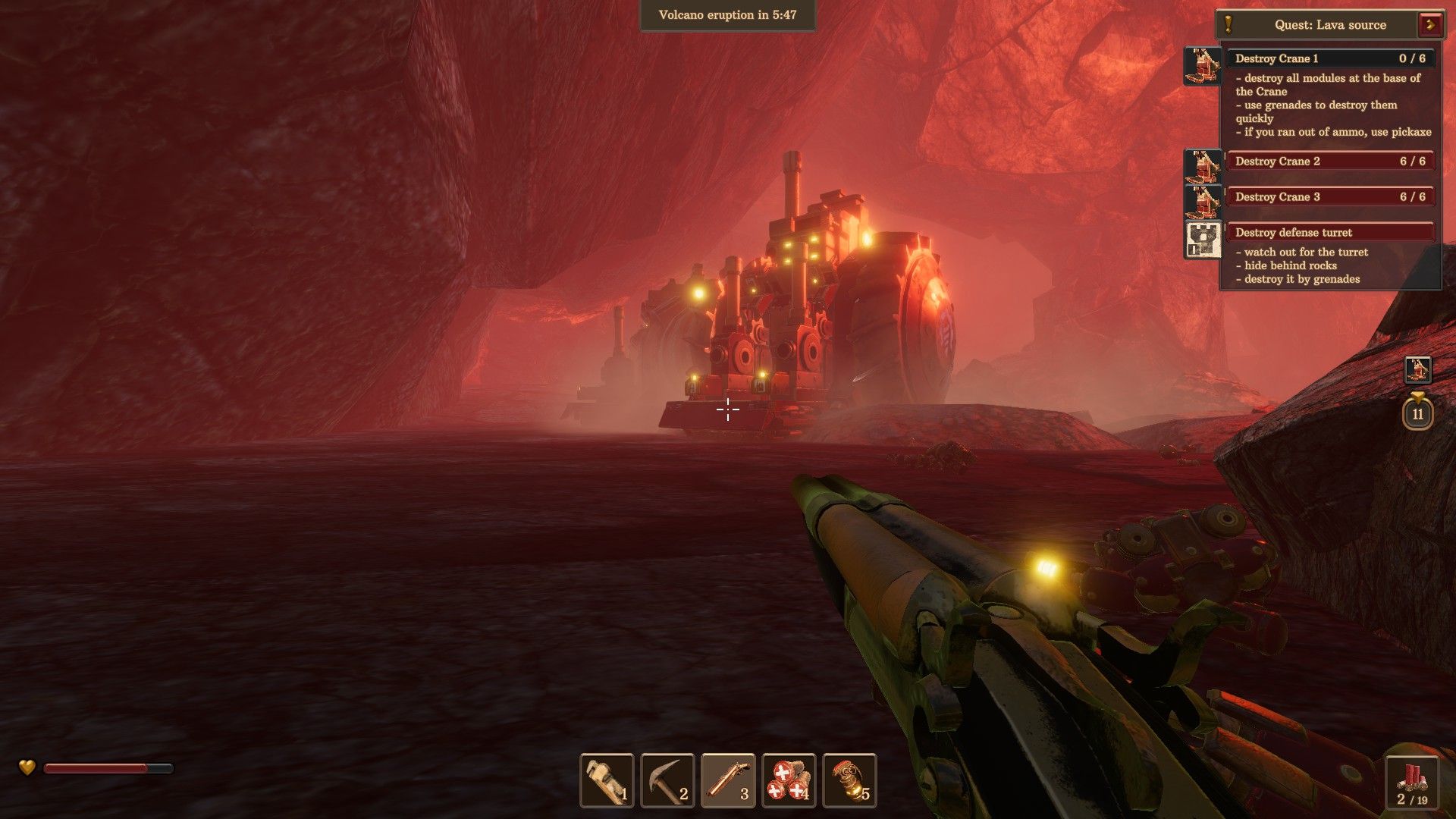 The robots run around in their caves in pairs or trios, not really paying attention to anything, until they spot you and open fire. There are also very annoying enemy turrets. To blast these you basically need to pop in and out of cover, taking potshots and throwing grenades until the mounted gun is blown up. It’s tedious, uninspired FPS non-design. The caves themselves are big, mostly empty spaces spattered with sulphur for you to mine if you finish your laser destruction job early. And you’ll need that sulphur to refine into powder to make more bullets to fill your shotgun to shoot more baddies to... 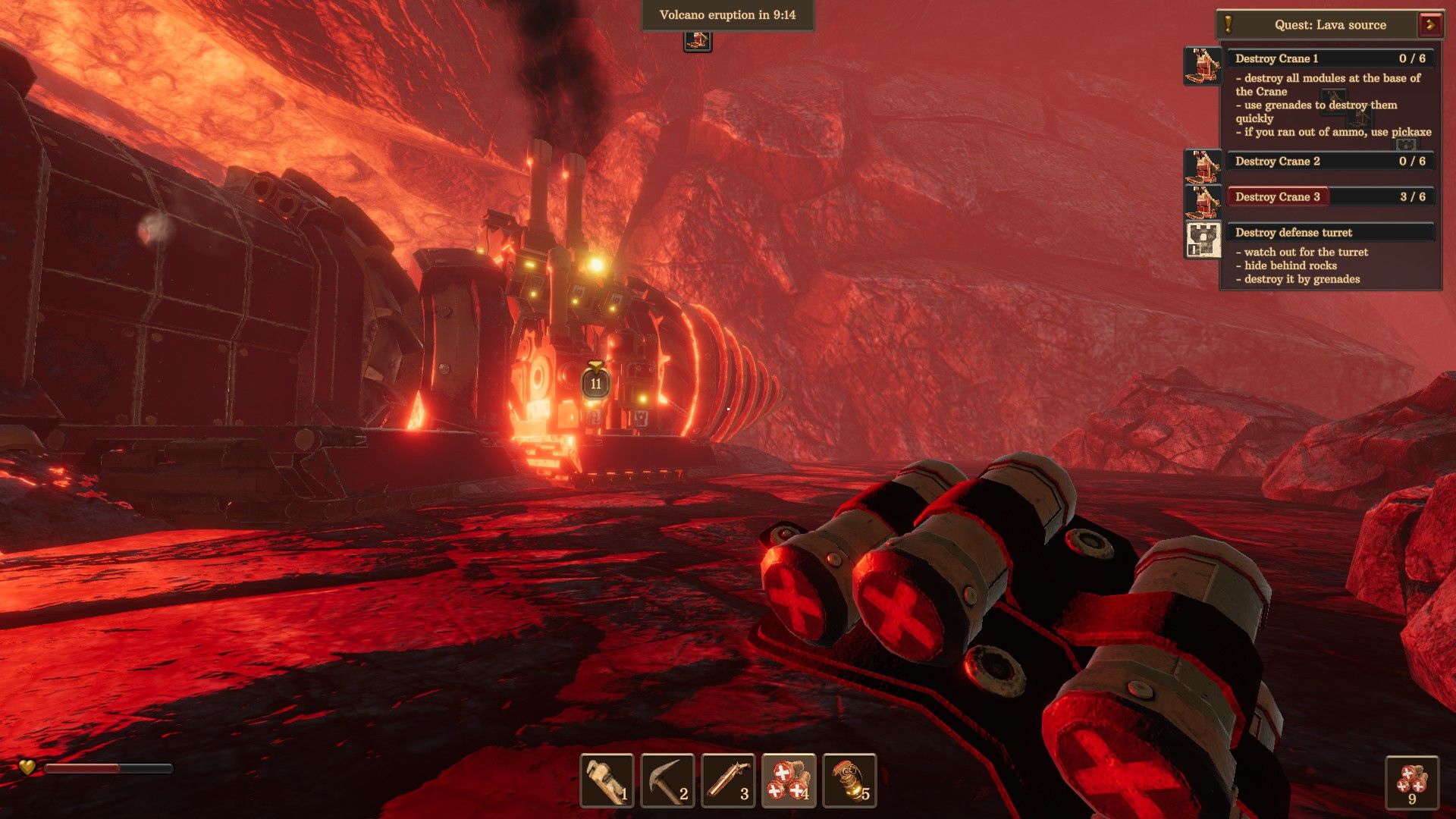 And there it is: the moment that arrives with every survival game sooner or later. “Why am I doing this again?” With Volcanoids it came to me especially fast. Why was I mining this sulphur? To go on another one of these raids? It’s not very inviting. Volcanoids has an interesting premise, the idea of keeping a giant drill train in good nick on a constantly exploding island. Super. But that idea still only exists here in nuts and bolts. If you’re looking for something to soothe that survival game itch, this isn’t yet the ointment for you.