It's hard to imagine a game clunkier than Warhammer 40,000: Inquisitor - Martyr [official site]. Even the name is a lumpen boulder. (We'll call it "Martyr" for our sanity's sake.) This doesn't necessarily mean it's a bad game - there's probably something decent enough behind it all - just the clunkiest festival of clunk since Professor David Clunkington invented his Clunkatron 3000.

A few months into early access, and with a lot of its features now locked down but for tweaking, Martyr is still in alpha and a good way from finished, so assume everything I have to say about it is constructive criticism for developers NeocoreGames (even their company name is clunky!), makers of the well liked King Arthur and the fine-but-immediately-forgotten Van Helsing series of aRPGs. Their foray into the Games Workshop sees them take a more tactical approach to the action RPG, in a bizarrely sprawling (or perhaps, aimless) collection of confined missions in restricted levels.

What this essentially boils down to is entering a procedurally generated dungeon of interlocking room tiles, and killing everything. Or surviving by running away!

That's my tactic, anyway. The game's levels, very small compared to the wide open lands of your typical action roleplayer, are also tougher. Your Power Rating is a guide used to determine how tough a mission might be, comparing your number (based on the loudout you're currently carrying, improved by drops or bought items, more significantly improved by increasing your Inquisitorial Rank) to the number of the level. If you're at a disadvantage, your rewards will be greater, and vice versa.

There are plans, they say, for a series of game-led tutorials to come, to explain the basics of the game. For now it requires reading a few dozen pages of tutorial text screens, and boy-oh-boy does it put its clunky cards on the awkwardly shaped wobbly table. As you pick apart the Account Level, the Inquisitorial Rank, and the Power Rating, and realise each is a different means of measuring and improving the level of your character, each with their own skills, some affecting just one character, another all characters in your account, and then each affected by Fate, a skill gained by completing or competing in the 'different' mission types, each selected through the Starmap that has four different view levels... well, you start to get the picture. However, rather problematically, this complexity is almost entirely confined to the menus between actually playing. 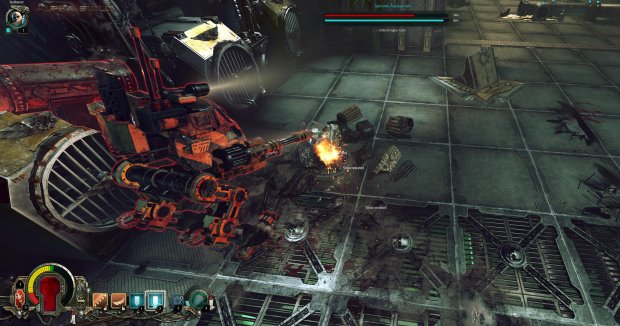 The first time I played I rushed in, as you would, and got completely trounced. It took a moment to get the hang of things, to realise that I was going to have to be more careful when controlling my lumbering tank of a Juggernaut Crusader. Mobs need to be managed, not triggering too many at once, using scenery to block attacks, and your limited range of attacks (four per weapon setup, plus a couple of extra bits) need to be deployed at a sensible pace. Then there's both your health and your Suppression Resistance bar to monitor (the latter being how much you can cope with incoming attacks, depleted by taking on too many, or too large enemies). Both are quickly refilled with a bit of tactical legging it, to a quieter area, then charging back in. And there's destructible scenery, exploding objects, and the like, which you're supposed to try to use as tactics against enemies.

The problem is, the fighting doesn't match the complexity all that suggests. The tutorial texts encourage you to lead enemies toward explosive barrels or similar, but they rarely seem to want to budge from their location in my experience. The larger enemies I've encountered - such as a dubious AT-ST-alike - would only follow me a very limited distance, and the random layout of the level meant there was no cunningly scripted mannable turret for me to lure him toward. Running away is so effectively because mostly they can't be led to follow.

Even less realistic is the tutorial's belief in "Dodgeable Attacks", where larger enemies are supposed to flag their big hits, and you're supposed to be able to dodge them. But this is a game controlled by mouse, and to aim you need your cursor over targeted enemies, and using it to click a spot away from an enemy becomes massively impractical, and far more often, the game is too slow to respond anyway. (The Assassin characters, the only other type alongside Crusaders at this point, have much more nimble dodges, but Crusaders need to avoid attacks too!)

There's a cover system, which is you'll be shocked to learn, incredibly clunky. You have to hold down the Space bar to use it, rather than toggle, and you can then fire from cover. But your character is ridiculously exposed, and enemies destroy cover incredibly quickly. It's often far safer not to use cover at all.

The camera is, well, the word for it is "clunky". It's agonisingly fixed at the stupidest angle, not letting you see particularly far ahead of you (where your guy could obviously see), with your character in the very middle-middle of the screen. That's a deeply weird place to put the place, who is far more used to being about 1/3 from the bottom, and only makes the inability to tilt the camera all the more infuriating. To rotate you need to use the middle mouse button, and there's no intelligence putting the camera anywhere sensible for you. You have to do all the work for that, basically, not least when it regularly fails to make pillars and walls translucent as it's supposed to when they block your view.

But clunkiest of all is something that feels like a cross between running out of memory, and lag, but I think is neither. There's lag in co-op, I understand, but playing on my own, in a game that's only online in the sense that a bloody text chat box pops up for about three seconds every time another player playing on their own writes something, I'm not sure it's that. Despite the framerate coping in a very busy battle (running 45-52 at full whack, so not brilliant, but a steady 60 on the next highest setting), the game looks as though it had dropped to the teens, with staggering and juddering making it deeply irritating to play. And this happens in every mission, about two-thirds in, as if the game can't cope with remembering the weeny level. I've checked my my machine, and the 32GB of RAM isn't even half-used, all is running beautifully. But every single mission starts to chug and stagger until it's grim to play.

It's worth noting that this is that most loathed of gaming categories - "always online" - for seemingly no sensible reason. Leave the game idle and it'll log you out of your mission and drop to the opening menu. Good times!

This really isn't helped by some of the weirdest pathfinding code I've ever encountered. As in most aRPGs, you move with the mouse, either clicking to a destination, or holding down and guiding. Bu with the latter, vital in the scraps, it tries to "help" in some deeply peculiar way. The character will run in the opposite direction to the one you're clicking in, usually when trying to reach cover, presumably because it thinks it's aiding you in running around the obstacle, when all you bloody want to do is duck behind it. Which of course means it runs you directly into the fray - utterly hateful when you're super-low on health and just trying to hold up.

And as I plough through mission after clunky mission, one thing becomes achingly apparent: they're all the same. It doesn't matter if they change the textures, perhaps have you on some grey rocks instead of grey metal corridors, or whether they pretend the goals have changed from "kill everything" to "click on three objects while killing everything", you're just doing the same thing over and over and over, with no variation. That might, in fairness, quite accurately describe the aRPG as a genre, but there are usually at least an array of baubles to distract: plentiful loot drops, inventory tetris, characters to chat to, villages to visit, and most of all, a sense of exploring a large world. Martyr has precisely none of these features.

Much is yet to be fixed, of course. Much is yet to be added, including story campaigns. More still is to be tweaked. Dear Chaos Gods, I hope this includes letting you re-angle the camera to be able to see more than five steps ahead. But what's here so far does not inspire me at all. It's a leaden affair, a deeply clumsy game at its very core, and while it could absolutely revolutionise itself before final release, I can only write about the game that's current on sale at full price.

(The Steam page for the game is at huge pains to stress the game is unfinished, and practically begs people not to critique it. But writing a disclaimer like this doesn't work - the game is for sale, for a significant amount of money, and paying customers are a very different thing from paid employees.)

I've now encountered quite the bug that doesn't allow me to click on anything on the screen, nor pull up menus, which impressively persists after shutting down and restarting the game. So I think that's my time over for now. I'm genuinely still interested to see if this can coalesce into something more interesting, because it's a genre I like. But right now, this is a beta program you'd want to be paid for taking part in, not charged for the honour.