If you click on a link and make a purchase we may receive a small commission. Read our editorial policy.
Developer: Bulwark Studios
Publisher: Kasedo Games

Cyborg Popes vs. immortal pharaoh terminators, woop woop. As Games Workshop rent out their license to anyone who can spell ‘ork’ correctly, their slightly fashy gothic future setting occasionally turns out a real treat of a match up. Bulwark Studios’ Mechanicus is one of the most polished and atmospheric titles to use the name in years, starting with a base coat borrowed from tactics genre titans before it, and gluing on an entire sprues worth of fresh ideas.

Unfortunately, the undead robot phalanxes that stalk its cavernous underground tombs put up so little fight that I rarely needed to dig below the surface, ultimately leaving its wealth of tactical options underutilised and gathering dust.

The game begins as the Adeptus Mechanicus -- spidery, technology worshipping cyborg priests -- pick up a strange signal emanating from the planet Silva Tenebris. Sensing an opportunity to find an advantage in their unending holy space Brexit, they send a team of Tech Priests to investigate. What they find is the Necrons, shiny skellies with neon green gauss weapons who don’t like to stay dead. 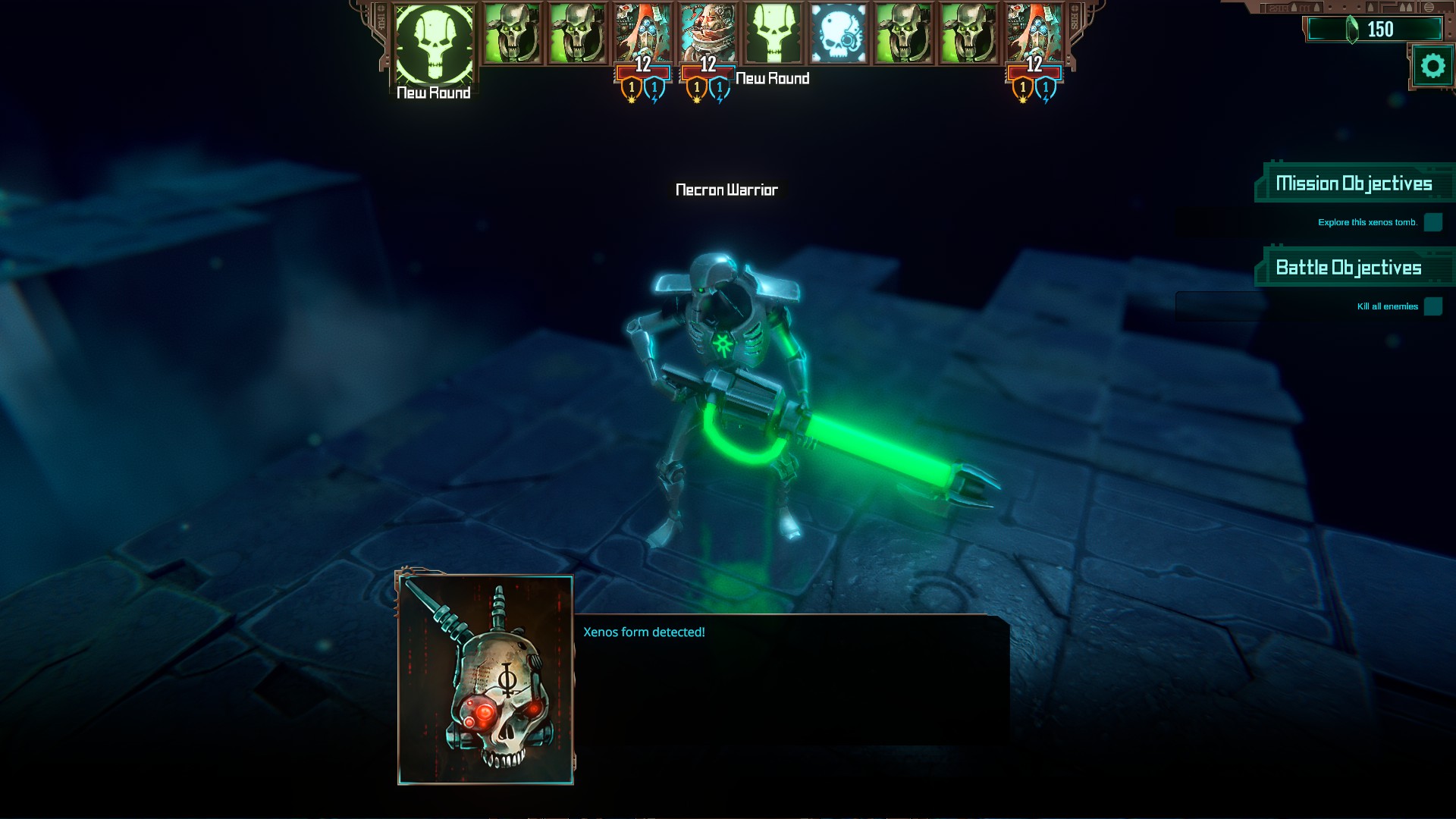 In the tabletop game, they regenerate on a 3+, which is bollocks and completely broken and no, I’m not rage quitting, I have to be home for dinner and its nothing to do with your stupid broken Necrons. In Mechanicus, the Necron’s regeneration and awakening becomes the focus of the entire campaign, as you race to stop the cavernous network of tombs under Silva Tenebris awakening and zapping the galaxy to death.

There are three layers in all, starting with the ship control room. From here, you can upgrade and outfit your tech priests using the resources and equipment you find on missions. There are six different tech trees -- or disciplines -- which you can mix and match for each unit. Upgrades also earn your Priests more slots to equip weapons, armour, and gadgets.

Mechanicus has an open mission structure. There’s always at least a two or three different quests to choose from, and each specifies rewards, difficulty, and likely enemy encounters before you dive in. Your only constraint is the awakening meter displayed at the top. When it fills up, you’ll be thrown straight into Mechanicus’ final encounter, so the idea is to get your force as kitted out as possible before that happens. 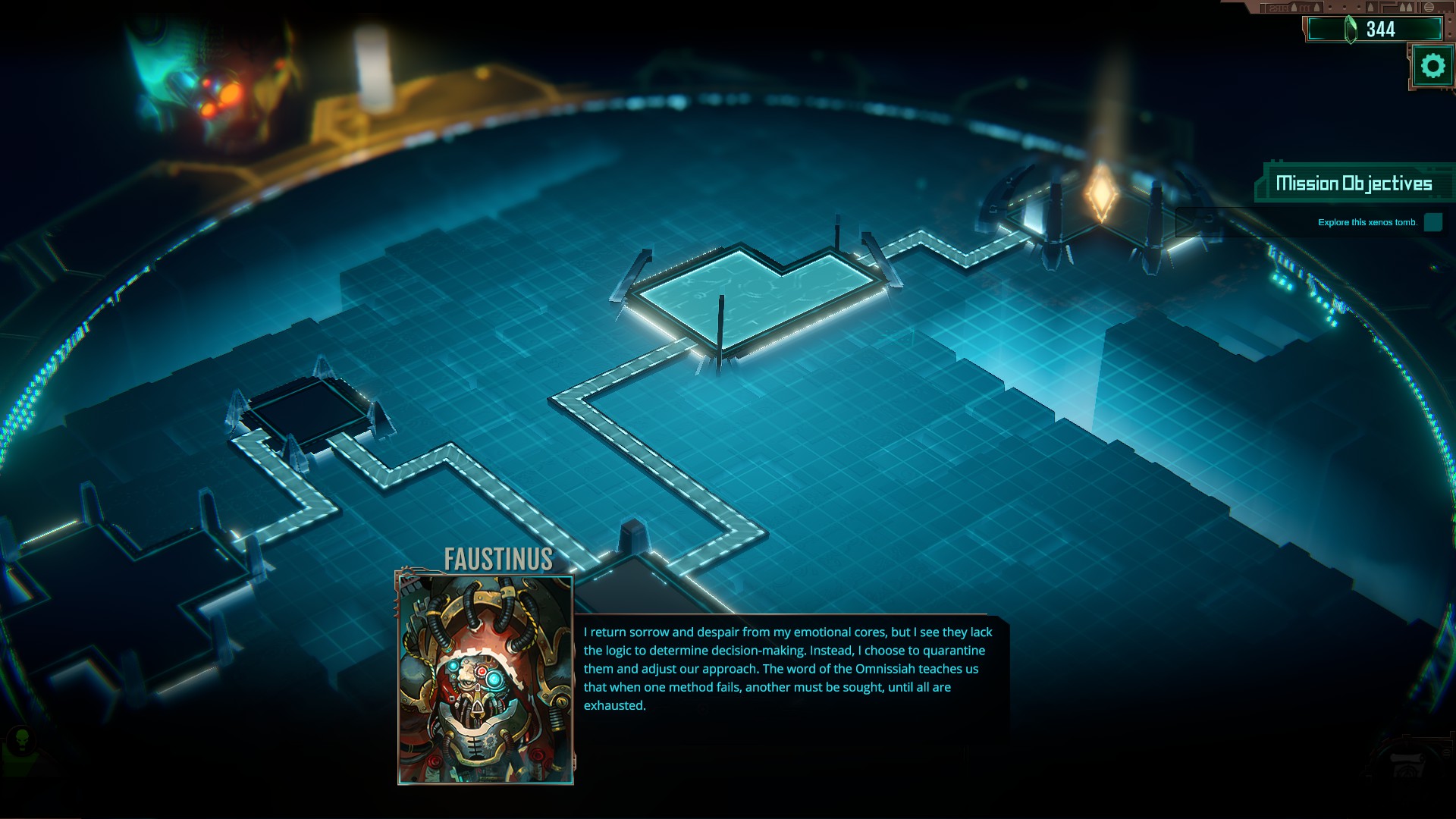 Missions themselves are dual layered. An exploration map marks out your objectives. Along the way, you’ll complete CYOA-style encounters, brought to life with enjoyably hammy flavour text. These choices sometimes grant bonus resources or tactical advantages, but just as often result in your squad losing health or increasing the awareness level of the tomb, giving the Necrons initiative or combat bonuses.

It’s a novel way to break up combat encounters, and combined with a great soundtrack, lends tomb diving a palpable atmosphere of creepy menace. Guttural synths erupt into a relentless, gothic cathedral organ layered over glitchy breakbeats as soon as the fighting kicks off. Battles themselves look and sound great too, from the relentless march of the silver and green necron warriors to the sizzling bursts of energy weapons scorching across the map.

Combat is turn-based, and revolves around a resource called Cognition Points, or CP - effectively action points. Priests can move and use basic weapons for free, but require extra CP for special actions like healing or using heavy weapons. You start off with a limited pool, increasing the gauge by completing certain mission. With enough CP and the right abilities, you can have individual units perform board-sweeping combos, taking out multiple Necrons before refilling the CP gauge and passing it on to the next unit. 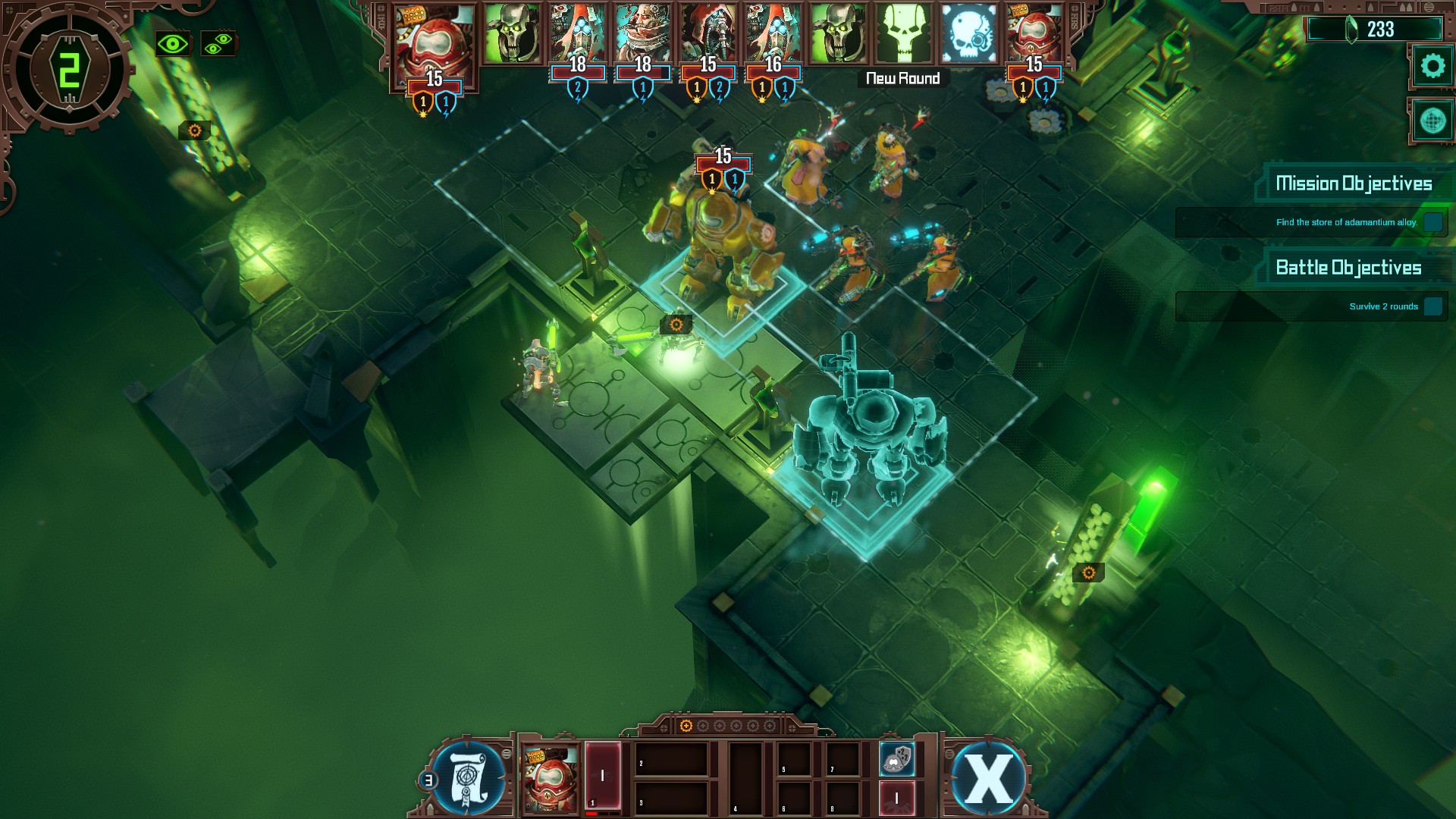 And this is Mechanicus’ biggest issue. Choose the right abilities early, and you can all but break the game. I’d soon kitted out my priests with enough CP generating perks and free heavy weapon shots I was able to clear out most threats before they had a chance to respond. By the halfway point, the game started playing itself.

There’s a huge and varied roster of enemy units, each with unique and interesting special abilities. In the bin they went. There’re several unlockable support units that each play a different tactical role in combat, none of which are necessary once you get a big robot with dual flamethrowers. There’s a staggering number of weapons and technology with a different firing arcs and tactical benefits, none of which I really had to pay attention to aside from occasionally checking damage numbers.

I don’t believe games need to be difficult to be enjoyable. I do believe that tactics games are reliant on a sense of danger and consequence behind decisions to make those decisions meaningful. All the options in the world become superfluous if I find an optimal way of playing I can repeat over and over until everything is dead, and I am left feeling hollow inside, a hoarder of unearned victories, a crumbling effigy to false accomplishment. 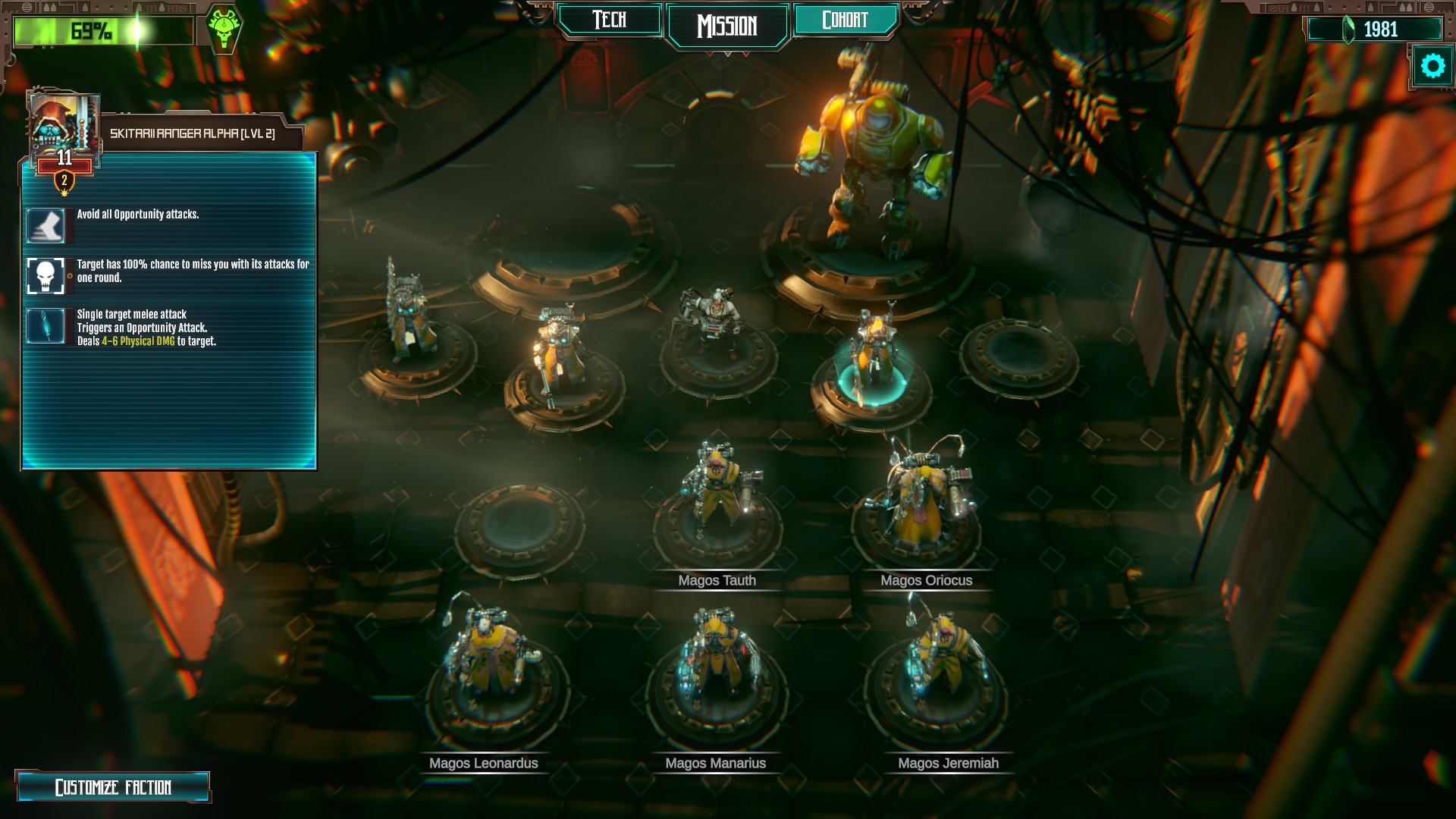 Ultimately, there’s a serious imbalance here between your own power creep and that of your Necron foes. This ends up robbing Mechanicus of both strategic satisfaction (do I really have agency when there’s very few optimal decisions?), and romantic satisfaction (it’s hard to empathise with narrative struggle if I don’t get some sense of pushback on a mechanical level).

This is also true for the risk/reward minigame in the exploration sections. The idea is that you can spend longer in the tombs in the hunt for extra rewards, but risk granting more bonuses to the Necrons in the process. I never felt like I was on the back foot enough to want to spend any more time in the tombs than necessary.

Look, Mechanicus, old mate. None of this is your fault. It’s a personal bugbear; I don’t think power fantasies and turn based tactics mix well. I need to feel at least a bit weaker than whoever I’m up against because, I mean, that’s why you need to use tactics, right? Otherwise I’m basically an observer who gets to choose the specifics of how my invincible Popebots mercilessly crush whatever hapless xenos has turned up for pyramid polishing duty that day. 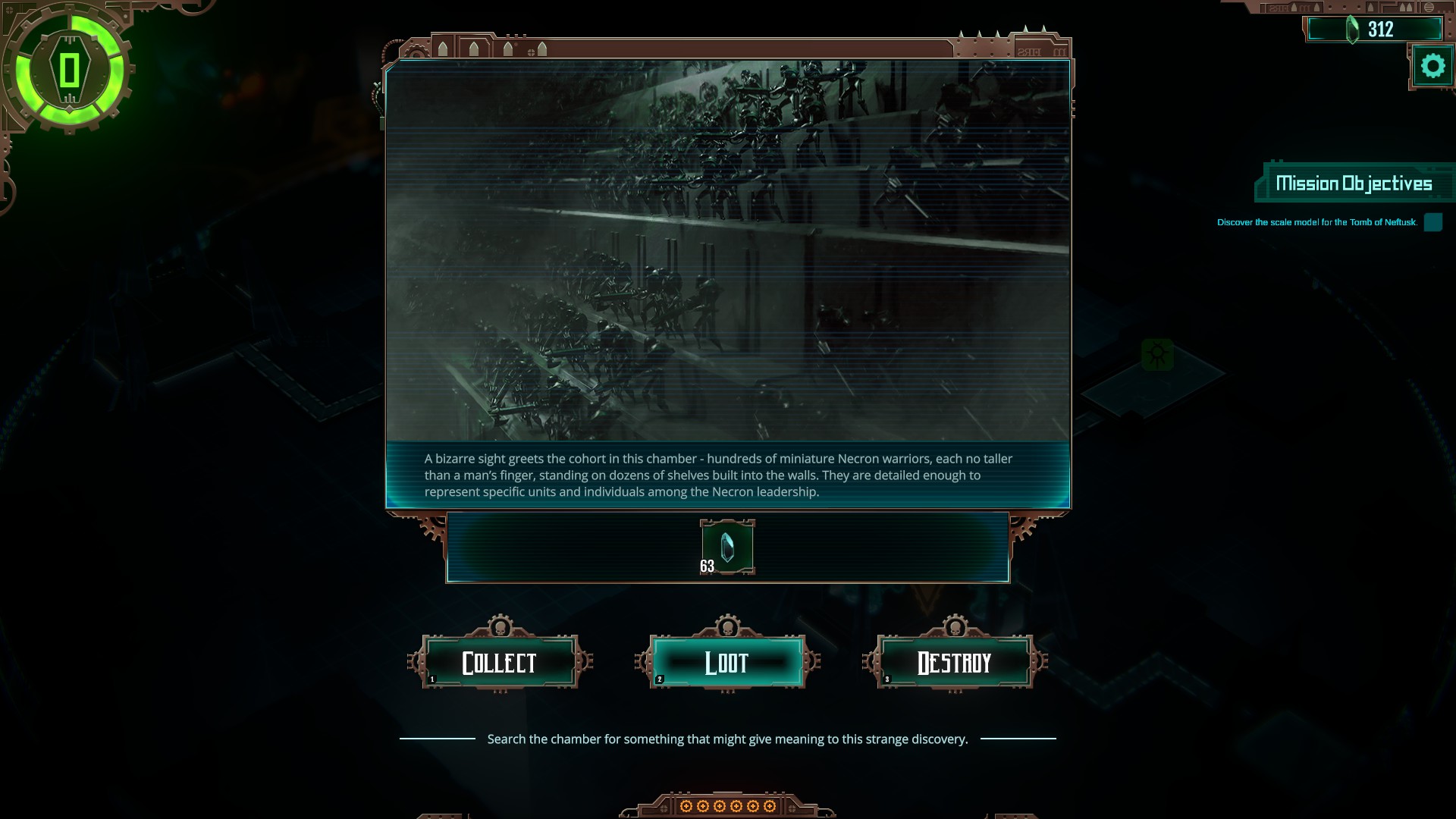 And there’re so many options! So many different decisions and class specifications and guns and it all looks and sounds and reads so well! There’s some genuinely interesting thematic stuff going on too, between the Necrons cursed with techno-immortality, and the Adeptus Mechanicus who’ve given up their failing flesh in pursuit of the same thing. It’s genuinely engaging stuff, and even manages to wring some clever humour out of 40k’s famously poe-faced lore.

Even when things got super easy, I still really enjoyed ordering my beautifully animated, lovingly customised Pope bots around these maps, dripping with architectural oddity and detail as they were, and watching them dismantle their foes with fuck-off power axes.But there’s just no bite to it, and it sadly ends up undermining itself as a result. If difficulty options get patched in though, grab it in a heartbeat. It’s so close to being fantastic it hurts.