If you click on a link and make a purchase we may receive a small commission. Read our editorial policy.
This is The Mechanic, where Alex Wiltshire invites developers to discuss the difficult journeys they’ve taken to make their games. This time, Warhammer 40,000: Mechanicus [official site].

The Adeptus Mechanicus are one heck of a Warhammer 40K faction. These shadowy racist warrior monks are more machine than human and worship a trinity of machine gods. They say stuff like, “From the moment I understood the weakness of my flesh, it disgusted me. I prayed for the strength and certainty of steel. I aspired to the purity of the blessed machine.”

Those words are from the intro to Warhammer 40,000: Mechanicus, an excellent turn-based tactics game that really gets the AdMech. Yet developer Bulwark Studios hadn’t even played 40K before they took it on. In order to make it, this small team had to negotiate decades of sacred lore and intense fan expectation while also being disallowed from following existing tactics templates, even 40K’s. Such is the challenge of making a licensed game, but sometimes great things can emerge from stricture and a dose of inspiration.

Bulwark are the French developers of strategy-RPG Crowntakers, which Adam declared was “on the whole, a delicious, hearty, warming broth” back in 2014. But in the years following its release they failed to find their next big project, instead taking on various work-for-hire gigs to keep afloat. In early 2016 the money began drying up and they felt the studio had lost its reason for being. “If we hadn’t gotten anything by the end of the year we would have to close,” cofounder Manu Monnereau tells me.

Then in spring, Crowntakers publisher Kalypso made a proposal. Its subsidiary, Kasedo Games, had been chasing Games Workshop for a licence to make a 40K game and had finally been given a chance to pitch concepts based on the AdMech. Would Bulwark like to work on one?

“We started buying Adeptus Mechanicus and Skitarii codexes, because we knew nothing about them at the time,” says Monnereau. They knew that it was a long shot, attempting to impress Games Workshop with an idea based on hurried research into 40K’s epic factional nuance and detail. But they put together a five-page pitch, and waited.

“And then we didn’t hear about it for six months.” It wasn’t easy to figure out a game concept from the Adeptus Mechanicus’ rich history. As Monnereau read the codexes, lushly illustrated books which blend stories and background histories with tables of stats and rulesets for the tabletop war game, he found them fascinating. “This is the faction which crafts the weapons for the Imperium, so OK, what kind of game can we make from that?” he says, but an idea didn’t immediately emerge.

They’d previously been exploring a simulation about managing resources. Perhaps they could translate it into working as the AdMech, so you’d be constructing weaponry on their forge worlds, where billions toil to fuel eternal galactic war? “But you’d be building weapons that you couldn’t play with and that would be really frustrating, so no, we didn’t do that, no way.”

Then they started to learn about the AdMech’s zealous quest for knowledge, in which they send expeditions into the outer reaches of the galaxy to find ancient technologies. “Actually, we were pitching at the same time a game about space archaeology and it was surprisingly close,” says Monnereau. But he knew it had to be based on one planet since Bulwark simply didn’t have the resources to make more.

Thus the original pitch had a basic theme and setting. And since it wasn’t going to be a simulation, it’d be a tactical game - given their experience from making Crowntakers, it was the safest choice.

At least, that’s the way they saw it. From the outside, it might seem ambitious to pitch a tactics game to a company built on tactics games and a fervent fanbase. (“People are pretty harsh when they speak about 40K on forums,” says Monnereau.) But Bulwark didn’t really think about all that. They were busy enough figuring out how to extract a good game from the Adeptus Mechanicus. 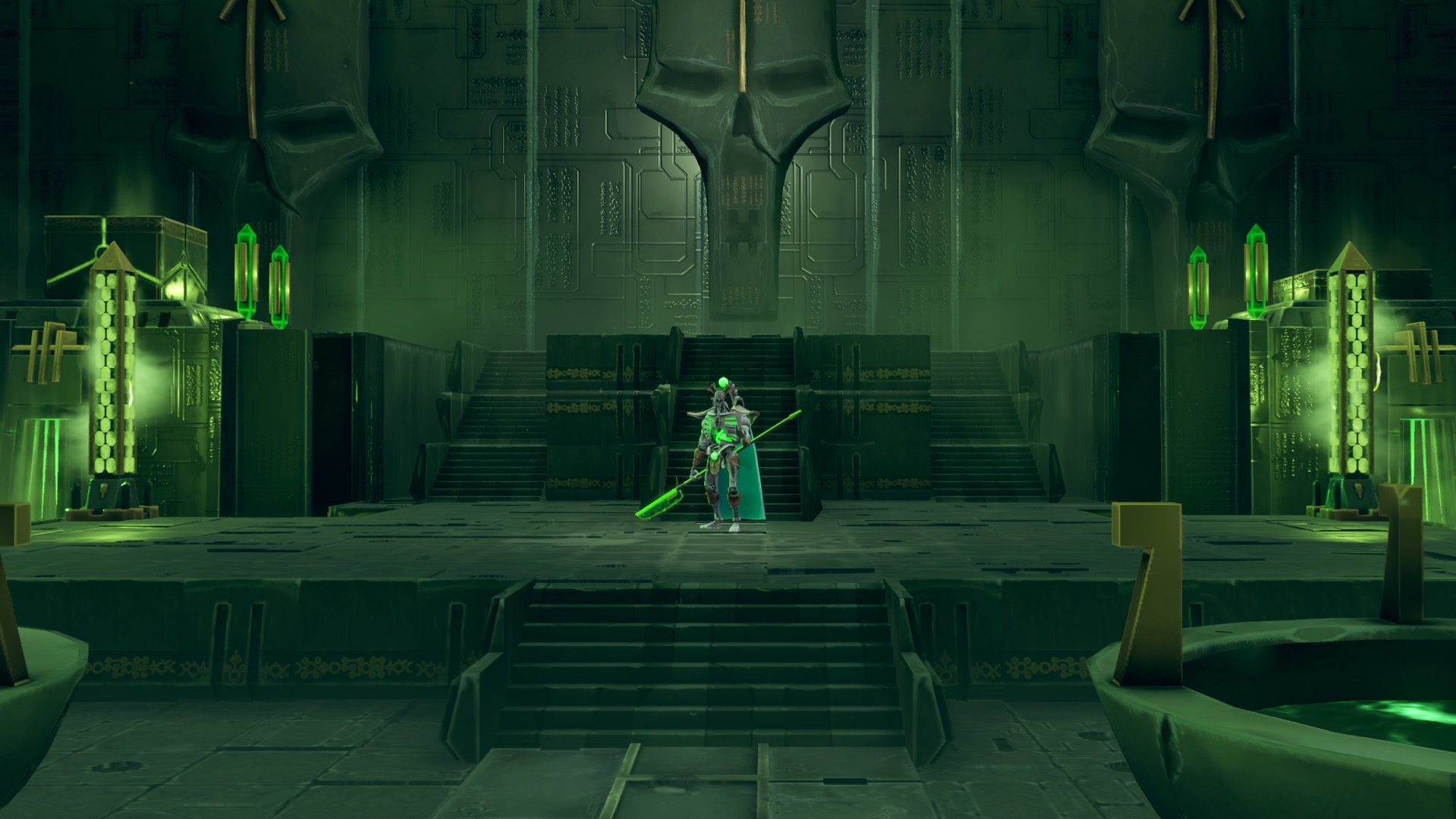 Finally, in late 2016 they got a call. Games Workshop liked the idea and had given it the green light. “It was a life-changing moment,” says Monnereau. The studio was saved. Games Workshop gave Bulwark a choice of enemy faction, and so they began begin to think about which might give AdMech enough secrets and mysteries to go out and dig up.

“We came to the Necron, who are an ancient civilisation. It was interesting because they live on tomb worlds in hibernation, so it was a good fit because the AdMech is known for retrieving as much as they can and at all costs, even risking the Necron hibernation protocol.” It was time to buy another codex.

“But still, we were really afraid.” Nervous of making a 2D game because it could look too cartoonish, Bulwark decided it had to be 3D, even though they’d never made a 3D game before.

What’s more, they had to make an original tactics game. XCOM 2 had come out earlier in the year, further cementing its successful take on tactics design. But, as Monnereau says, ”Games Workshop were not comfortable with us being too close to XCOM”. Bulwark were happy to make something distinctive and new, but it added yet more pressure on the project.

That’s why there’s no cover system in Mechanicus. “Cover is one of XCOM’s defining mechanics,” says Monnereau. “Nobody said don’t put a cover system in, it came from us. But it wasn’t a pure design decision, it was a reaction to us not wanting to fall into that trap.” 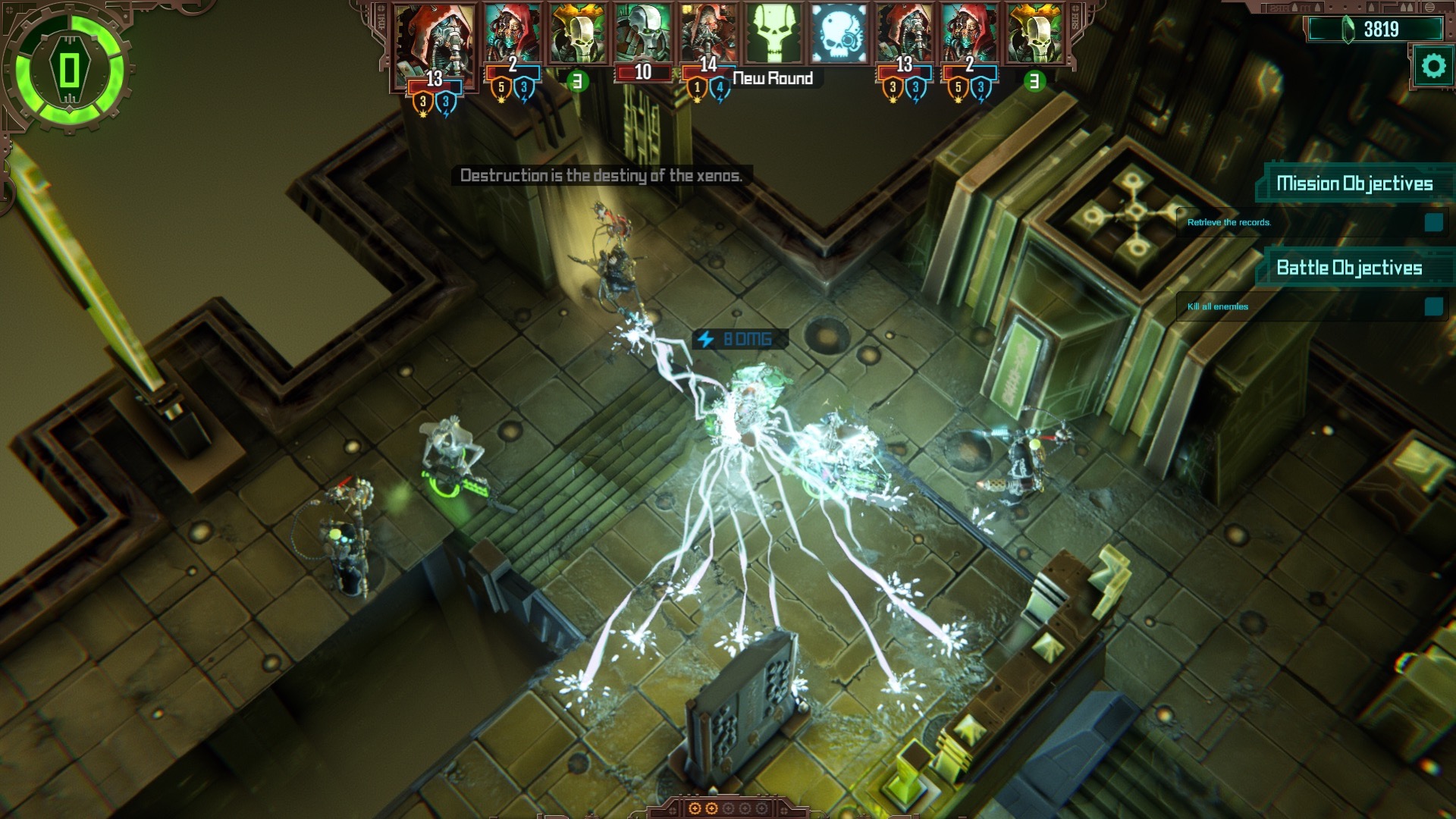 But it was also supported by the lore. The team couldn’t find any 40K art that features an AdMech Tech-Priest cowering behind a wall. “So it made sense but it was difficult because as designers, cover was a top reference and so we had to find our own mechanics and couldn’t rely on what we knew worked really well.”

If that wasn’t enough, Bulwark also ruled out having hit probability. They wanted the game to be fast-paced, with each decision certain, and also for missions to comprise several battles. RNG would make decisions feel meaningless if it scuppered a run.

So what would their game have? The Adeptus Mechanicus came to the rescue. Its transhuman Tech-Priests constantly chatter to each other over the noosphere (like, the internet) and are obsessed with data. Since the Necron are basically robots, perhaps they could be hacked? And perhaps their tombs could be controlled?

Nope. Games Workshop nixed the idea because Necron technology must remain unmastered by any other faction. So Bulwark focused on the data bit. If the AdMech are in the tombs looking for knowledge, perhaps that knowledge could be abstracted into the game rules? This idea led to two of Mechanicus’ core mechanics.

First came scanning. The AdMech can scan Necron enemies to see their hitpoints and armour type. “It was pretty convenient as we had this emblematic Servo-skull with each Tech-Priest and we had to find it a role to play during the game,” says Monnereau. What’s more, needing to know armour type to defeat Necron efficiently also helped replace an early attempt at a body-part targeting system that was slowing down the pace too much. 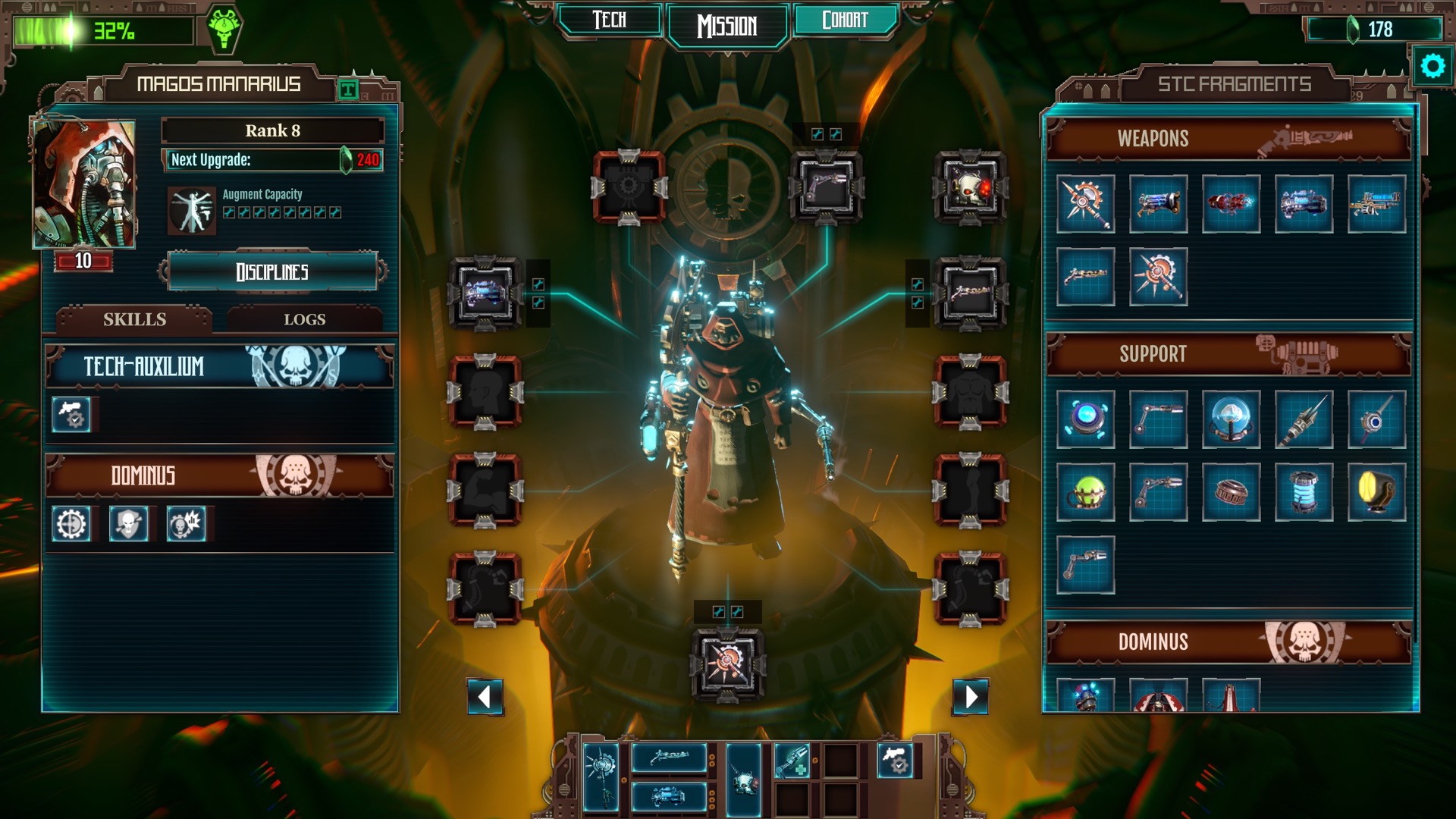 Next came the cognition system, which is probably Mechanicus’ key mechanic. “I was reading a Black Library book called Priests of Mars which is dedicated to the AdMech and there were people who see everything as a reason to learn, gathering statistics of servitors falling over,” explains Monnereau. “It was the idea of them seeing the world through analytics and processing that stuff all the time.”

In practice it means that various actions add cognition points to your team’s shared pool, which you spend on firing most weapons, moving long distances and performing special abilities such as healing. It therefore governs every aspect of the game.

Its early function, however, was to help encourage players to move around the levels, because in early prototypes they’d tend to pop out from behind a wall to fire and then pop back in again to take advantage of its line-of-sight system. “It’d be like a cover system but not an official one, so it’d be pretty terrible,” Monnereau says. The idea was that if there were mysterious Necron-built pillars around the level that provide cognition points when a Tech-Priest stands in range, they’d provide reason to expose themselves.

In the final game there are many sources of cognition, from defeated Necron to class traits, but the fact that cognition is shared is a nice nod to the way Tech-Priests are wired up to each other: one priest’s knowledge becomes everyone else’s. It also results in some typically abyssal-dark 40K humour: when expendable units like servitors are hit they earn cognition, representing the team having learned from the recorded telemetry of the Necron’s attack. 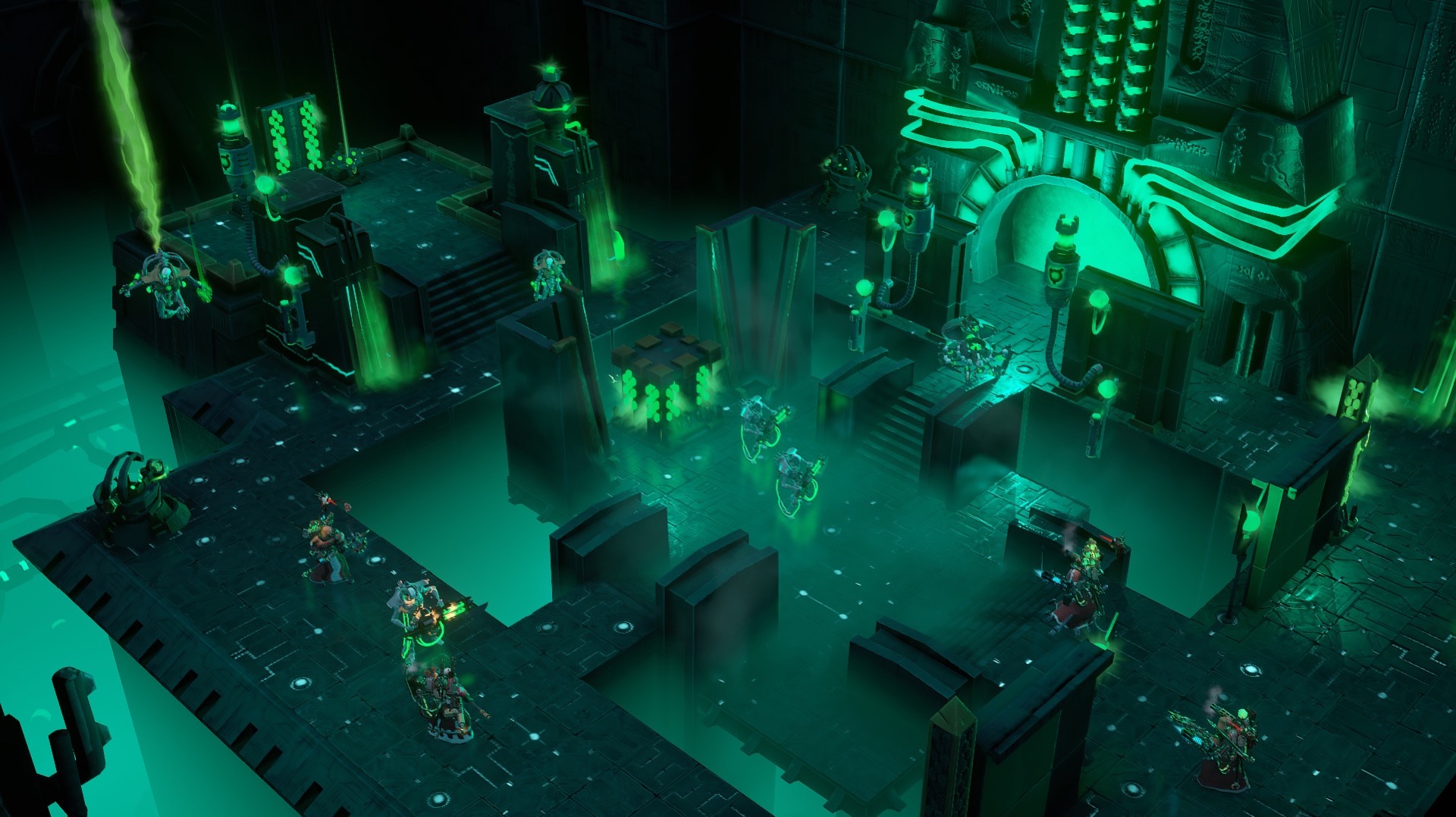 But the real neatness of the cognition system is that while it reflects AdMech lore, it also introduces fresh considerations into tactics: new risks and rewards, and the interesting challenge of eking the very most out of a Tech-Priest’s turn, earning and spending points while bearing in mind what your next priest will have to work with.

Other parts of AdMech lore arrived in Mechanicus almost wholesale, such as their chanted Canticles, litanies that the Tech-Priest sing to each other over the noosphere to give them stat buffs and bonuses. But some aspects of the lore took the team down dead ends. The AdMech believe that their weapons and equipment are inhabited by Machine Spirits which must be appeased so they work properly. “It was basically a system for reloading weapons and overheating, so when you fire your plasma weapon you could hurt yourself,” says Monnereau.

Critical misses like this are extremely Warhammer, but they feel punitive in the context of a singleplayer computer game, costing the player both health and cognition which would mean having to earn more over a turn or two before they can take out the opposition. As Monnereau says, “It wasn’t very fun, it felt like having to wait and it slowed down the pacing.”

So after several changes, Machine Spirits were simplified to being an attack bonus after a weapon is fired a certain number of times. I get the feeling they’re not satisfied with the solution (“We had different opinions,” says Monnereau), but close to release, they had to plump for one. 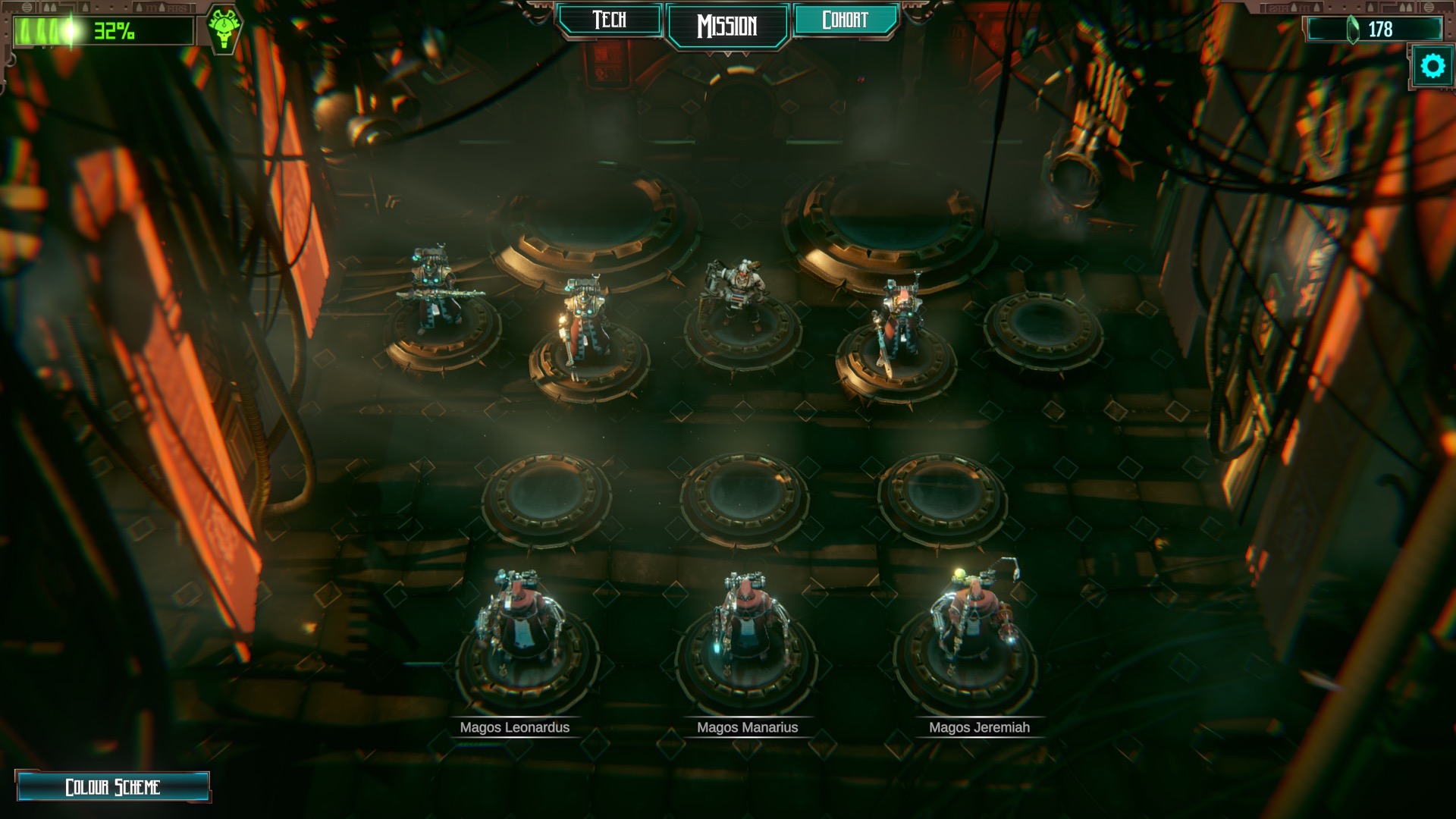 Indeed, with the economy of its single tomb setting, balance issues on launch, and systems like Machine Spirits which don’t quite matter in the midst of combat, the entire game bears evidence of the pressure Bulwark were under as they balanced the needs of the licence with those of the studio. But it doesn’t matter. Mechanicus reflects the AdMech’s obsessive piety and craving for knowledge and uses them to forge a new take on tactics. But what’s best about it is how much it both delights in and transcends its source.