Deus Ex director Warren Spector has always had very precise ideas about what games should be. A formative D&D campaign run by science fiction author Bruce Sterling. who helped to define the cyberpunk genre, showed Warren the importance of collaborative storytelling early on. “In a book or a movie the writer or director simply tells the audience what they think about a topic. You have nothing to do but decide whether you agree or disagree with the statement being made. There’s nothing wrong with that, but in a game we can do something different – we can set up a situation and let players decide for themselves,” Spector tells me over email.

We told the complete story of the making of Deus Ex with an oral history last month, based on interviews with its designers, writers and publishers.

This is what Warren calls “shared authorship” – something that’ll make immediate sense to those who’ve played tabletop roleplaying games where the general shape of a story might be planned out by a Dungeon Master, but the details are left up to players who often improvise or go off script. “It’s about giving players the freedom to decide how to interact with the challenges the developer confronts them with.”

For example, in any given Deus Ex level, the beginning and end are often meticulously planned out, but the middle sections – how the player arrives at their goal – are given over to them. “We can ask questions like ‘do you kill that person or not?’ and let players decide how to answer through their choices. We can then show them the consequences. That strikes me as fundamentally different. It’s the developer asking a question and the player answering it, followed by the revealing of the consequences which then forces them to make more choices. Shared authorship of the experience.”

One of the joys of Deus Ex is found in breaking it. Overcoming obstacles earlier than intended, or in unexpected ways is part of the appeal of the genre, although Warren says that this wasn’t something they initially designed for.

"The game proved more robust than we had any right to expect. I think luck played a big role!"

“It was something that just fell unexpectedly out of the choice/consequence/recovery approach we took. We’d already seen hints of it in the games made at Looking Glass (makers of Underworld, System Shock, Thief) so we had an inkling it was coming. Deus Ex kind of took things to an extreme. We knew it was going to happen and so we tried to proof the game as much as possible,” Warren explains. This involved the team adding things like crates outside of map boundaries, so that when players inevitably jumped over into places they shouldn’t be, they could at least get back on track.

“The reality is that we had an incredible team of designers led by Harvey Smith, who planned for things that, in another project, could have been game-breaking. They bent over backwards to ensure that the game didn’t break when players made choices that were… in a lot of cases, insane. We saw some of them during development and were able to paper over them before we shipped. Players discovered them over the years,” – things like the LAM ladders, where you could place trip mines on walls and use them to scale up bit by bit – “but luckily the game proved more robust than we had any right to expect. I think luck played a big role!” 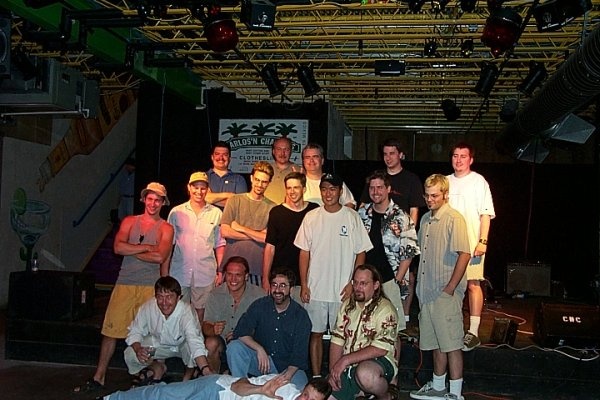 “There was a lot of content that was easily missed in Deus Ex… I remember having arguments with people at Origin Systems about this years before Deus Ex came out. The prevailing wisdom among developers was that it was expensive and time-consuming to create content, so you wanted players to see everything. I never bought that idea.” Warren and the team at Ion Storm Austin took the opposite approach. Missing content was part of the concept from the start – it was foundational. “It was part of the contract we made with players.”

“I’ve always felt that you want players to have unique experiences – you want them to answer questions differently than other players and see different things as a result.” Warren even has a formula for this. “You want people seeing 70% of your content. But, and this is the critical point, each player should see a subtly different 70%, meaning that the other 30% absolutely belonged to them.” This was why there were such discrepancies when I would discuss Deus Ex with friends twenty years ago, and why sometimes someone would tell you about what had happened in their game and you would simply stare at them incredulously. “No two players would end the game having had the exact same experience, and no playthrough would be the same as the last. I think that’s one of the reasons for the game’s longevity.”

Warren has more than once stated that he isn’t bothered by either the sales or critical reception of his games. Instead, he measures success by the conversations players have around his games. “Some years ago, I gave a talk at The New School in New York and afterwards did something I never do – went out for drinks with folks who’d been in the audience. At the bar, one of them sat down next to me (he was a little drunk) and asked ‘how could you make that right-wing piece of propaganda?’. Before I could answer, another guy walked up and, having overheard, said ‘right-wing propaganda? It was left-wing from start to finish!” The fact is, they were both right I guess, based on how they’d played. I was really tickled by that.”

Warren’s favourite discussions are wrapped up with Deus Ex’s end game. “In a way it was kind of lame – we offered players a Lady or the Tiger situation, (or worse, something like the Match Game!). But as recently as last year I saw a discussion. People were arguing about them, ‘do you really think the world is better off with free will in a new dark age?’ versus ‘how could you go for an outcome where people gave up free will in exchange for peace?’ and so on. The fact that people were arguing about the potential state of the world rather than how to beat a boss made me super happy.”

Deus Ex is continually brought up as an example of a game that seems almost uncannily prescient. Increasingly so. Yes, there’s the fact its New York skyline was missing the Twin Towers, explained as being destroyed in a terrorist attack a year before 9/11 (an accident that had everything to do with the game engine's technical limits). But it also explored big themes that were rare to see in games – social and economic inequality, revolution and socialism, artificial intelligence and the singularity and so on. I also can’t help but think of how it essentially tells a story about a law enforcement officer moving over to the other side, to the so-called ‘terrorists’.

Warren once said that when it comes to making games, if you don’t have anything to say then you’re wasting everyone’s time. I ask him if he still believes that. “I still believe it’s nice to have something to say – or, more precisely, interesting questions you want to discuss with players. It’s not for me to say what kinds of games people should make, but the fact is we wanted to address big ideas in Deus Ex. We extrapolated from current events back in the late ‘90s, which are sadly still relevant today. I mean, it’s a little freaky that the World Trade Center isn’t in the skyline. The kickoff to the story is the Gray Death, a pandemic that begins with coughing and a fever. The idea that the authorities aren’t always in the right. The risks associated with genetic manipulation, and the dangers of advanced AI. All of those had real-world corollaries back then. We gave everything a conspiratorial spin, of course, but basing your game on real events and fears gives you a better chance of achieving relevance compared with making another game about a space marine who stands between Earth and an alien invasion. I mean, come on – we can do better than that!”