Some games can be finished, completed, defeated or beaten. They have an end-point, even though they might be replayable. Others have the potential to go on forever. Whatever the case, there always comes a point when you're done with a game, and it might be long before the credits roll, or it might be after that one update that breaks a habit that has lasted for years. Why do we stop playing?

Let’s get one potential answer out of the way: ‘when we stop having fun’. While there’s definitely something to that idea, it doesn’t take into account temporary frustration caused by difficulty spikes, or the satisfaction - a related cousin of ‘fun’ - from seeing a narrative through to its end. It’s a sentiment that might work for multiplayer games, but I’m not convinced it can be applied more broadly than that. With a look at Shadow of War, Spelunky and Caveblazers among others, here are some thoughts on the end of play.

It also doesn’t quite get at a specific problem of mine, a psychological barrier that stops me from playing more of a game even when there’s still fun to be had. Let’s take Shadow of War as our first example: when I look at what I choose to spend my time doing in the game, it doesn’t make a lot of sense.

I’ve been running merrily around Mordor, hoovering up every artefact and poem, leaving no collectable in my wake. But why? It’s partly because picking them up rewards me with a steady stream of skill points - and the game does a good job of making those interesting and valuable for a long time - but there’s more going on than that.

I wouldn’t describe myself as a completionist, though there’s a bit of one sitting somewhere in my brain. Maybe there’s an evolutionary explanation there, to do with humans wanting to make their environments as orderly as possible to reduce the possibility of a tiger hiding nearby. 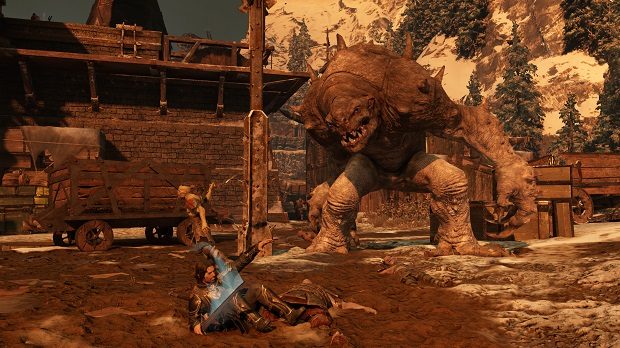 It really is very silly. After completing the main mission chain in Mass Effect Andromeda, I stopped playing for several months. Something (I can’t remember what) eventually made me go back, and those final hours I spent with it - completing all of the companion quests - might have been the ones I enjoyed the most.

Even worse, and sorry to stray briefly into console territory, I found that once I’d killed Ganon in Breath of the Wild I couldn’t bring myself to launch the game again. That’s despite the fact that I had the most fun with it when I was just exploring - I even told myself not to head to the central castle until I was absolutely satisfied I’d seen everything I wanted to in that beautiful world. I knew what was likely to happen - that I might turn away for good - but still couldn’t muster the willpower to delay that final confrontation.

Before I go on, I should acknowledge that I do sometimes start completely ignoring collectable nonsense before I’m done with the rest of a game. I’ve just reached that point in Shadow of War actually, after loading into a new area and being confronted with the amount of stuff on this map: 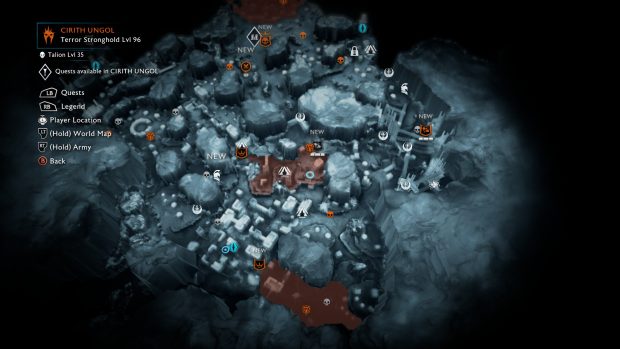 It's for the best. I’ve already spent dozens of hours with the game, and judging by the percentage of missions it says I’ve completed I’m probably not even halfway through. I’m still enjoying those story-based missions, and I’ll likely keep playing up until their end. Whether I’m going to get involved in this ‘Shadow War’ business is another question. The fourth act of the game is a series of escalating fortress battles, which will be very similar to the ten or so I’ll have already done by then. That brings up another issue - how much do I value seeing the ‘true’ ending of a game?

Playing the final stage of Shadow of War might be like sitting through the credits at the ‘end’ of a Marvel movie - only it will require hours of my time rather than a couple of minutes, for a similarly sized reward. Which I could just, you know, look up on Youtube.

I think my habit of abandoning games can’t be explained away as me only really caring about their central narrative. I play most roguelikes until I’ve beaten them once - not to see their endings, but because I enjoy feeling like I’ve mastered their challenge. Of course, beating a roguelike once hardly constitutes mastery over it. Even when I know that feeling is illusory, however, it can still drive my behaviour.

I remember playing the excellent Dungeon of the Endless, and having a lucky run during my first few hours with it where I managed to beat the final stage. I knew what was happening even then, with part of my brain genuinely hoping I’d fail so that another part would want to stick with the game for longer. More recently, I haven’t touched Caveblazers since I killed the final boss - though that’s largely to do with being blindsided by its bizarrely misogynistic ending [I had not seen that ending and wish I hadn't looked it up just now - ed].

I can think of one exception. After spending nearly 300 hours in it, I’ve reached the end of hell in Spelunky more times than I can count. That’s because each run in Spelunky manages to feel fresh and exciting long past the point where I’ll be bored by repetition in most other roguelikes. The fun of the game itself underpins that, but the real secret behind its longevity for me were its achievements. The last time I launched Spelunky was when I finally got the last one of those, the ludicrous ‘low scorer’ achievement where you have to beat the game without collecting any treasure. It effectively turns every speck of gold into a spike trap.

Getting that achievement seemed to flick the same switch as my first victory normally does. Whatever psychological mechanism is at play isn’t concerned with the number of hours I’ve invested, but satisfying a condition that’s tied to something other than how much fun I’ve had or could yet have in a game.

For Spelunky, that drive resulted in hundreds of enjoyable hours that I might not otherwise have experienced. In most other cases though, it curtails my amusement. It can also result in me continuing to play something I’m not particularly enjoying - if I stop appreciating Shadow of War’s story missions, I’ll probably still finish them. I wish I was free to decide when I’m done with a game, but it seems my brain won’t let me.