Not every game needs to reinvent the wheel. Or even involve themselves in this business of wheels. Sometimes you need only grab a few universally beloved things and jam them together. If you had an arena multiplayer shooter that combined the best levels of Halo with the constant world-bending of Portal and added a dash of the best parts of Overwatch, well, that's what Wormhole Wars looks like it wants to be. And that's what I want it to be too.

Wormhole Wars is targeting a February 2019 release, and is presently receiving an overhaul after a big funding increase. The team based world-bender has a few items to iron out at this point. The shooting and world seem built on solid foundations, even if the lore sounds giggle-worth video gamey. (Not that an arena shooter with physics puzzles needs a game bible.) The gameplay looks head-spinny and delightful, but the use of team-based portals that are visible to all players but can only be used by the players that create the portals... it seems like it needs a few passes to clean it up, but if they can nail this down into a clean portal shooter, then I'm all in.

Also, it is absolutely worth it to read the incredible pure bios for the guys behind 1047 Games: 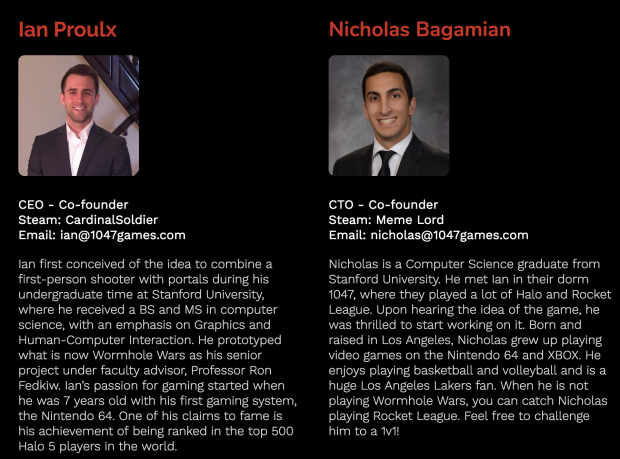 Check out the trailer for the game here:

You can follow the game at the official website here. There's an open alpha and such that you can get in on now.

Some better footage than the official footage is available below. This... feels like what Prey (2006) was trying to pull off. Those multiplayer servers have been dead for ten years, but this feels like a more polished version of that. Multiple commenters say this looks like a PS1 title? First, you don't remember what the PS1 looked like, you dino hunter poseur. Second, whatever: it looks cool and I'm cool and I'm going to play it.