The Gardens Between is all about reminiscing. It plays like two friends talking about all the adventures they've had, with the conversation flowing as they remember details and go back over stories that’ve grown with the telling. “Do you remember...?” it seems to say. “Oh yes, but before that-!” “And of course there was the bit where-!”

This is not a feeling that comes from the words used – because there are none. Instead, it stems from the gentle back and forth rhythm of the time-manipulation puzzles that make up each level of the game.

The goal is always to find an orb of light and then shepherd it past various obstacles to the end of the level, and the controls are simple: D to advance time, A to reverse it, and space to interact with various items that ignore whatever chronological shenanigans you get up to. It’s not that they’re deceptively simple, either - the puzzles themselves are generally straightforward, in that trial and error as you progress and rewind through time will usually end up slotting pieces into place without too much brow-furrowing involved.

The sections that do require some thought really shine, like the one that involves keeping track of a handful of playful cubes as they leap up and down a half-built treehouse, splashing different coloured paint in their wake, to see which one follows the right path to carry your lantern and collect the orb. But more often progressing means running into an unpredictable event and then following the only possible steps in front of you to continue. 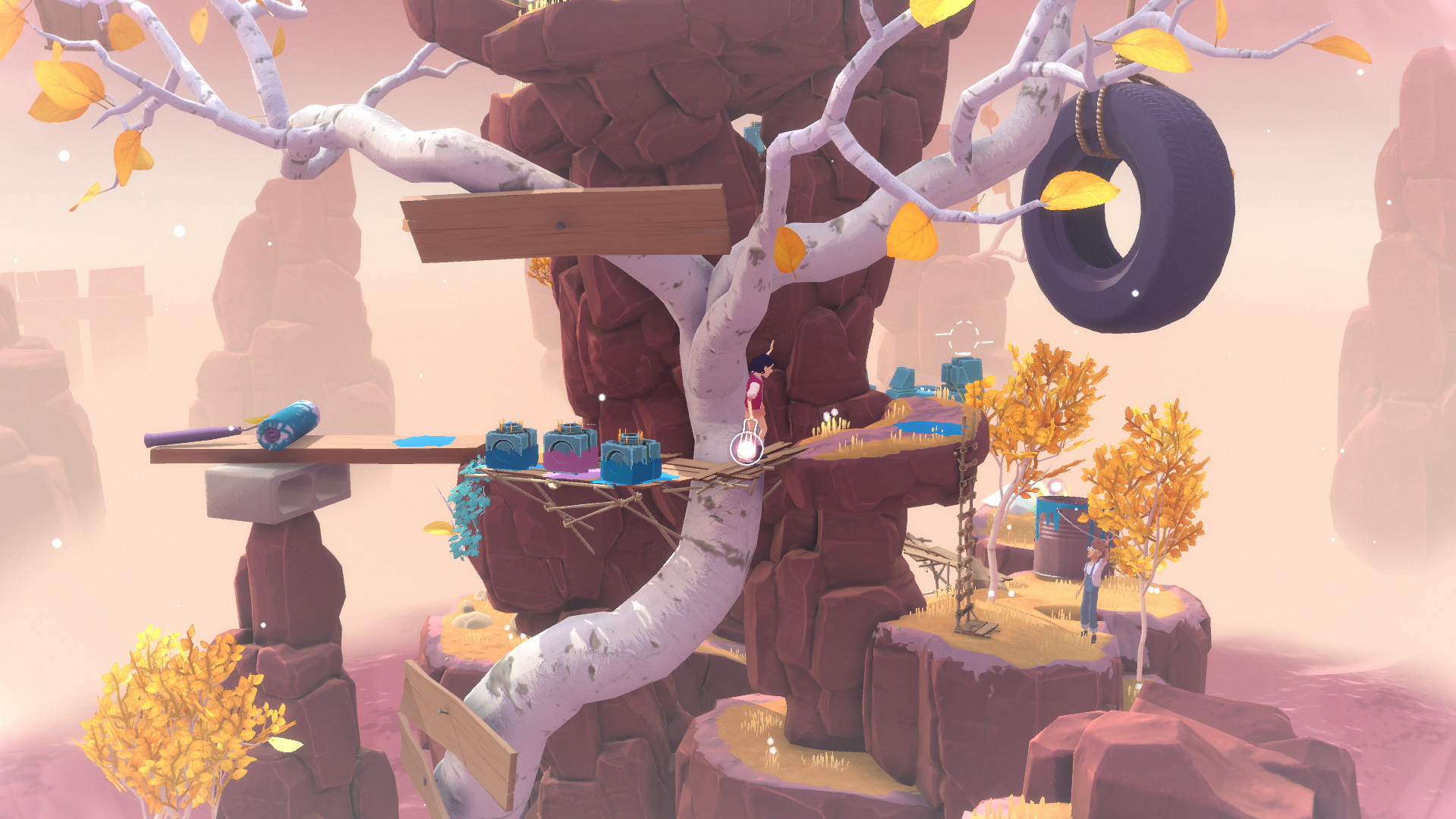 But that’s not to say these latter puzzles aren’t satisfying in their own right. Each world introduces a new mechanic, like the smoke that can both block your path and form bridges across otherwise unpassable gaps, but is dispersed by the orb, forcing you to get rid of and regain the light in turns. It makes each new area feel different from the last, and this constant change combined with the fact that the game doesn’t overstay its welcome means that a simple curiosity about how each level will unfold goes a long way towards making even the most uncomplicated puzzle engaging in its own right.

Moreover, the quiet swinging forward and backward to see what happens leaves plenty of time to soak in every gorgeous detail. The animations of the two protagonists, Arina and Frendt, does much of the heavy narrative lifting in the absence of words. The way that they hold hands, or how Arina waits for Frendt to catch up with folded arms can be both adorable and illustrative. They also have a habit of peering or pointing at things that are clues for the level’s puzzles, which lends a sense of childlike awe to the whole affair. 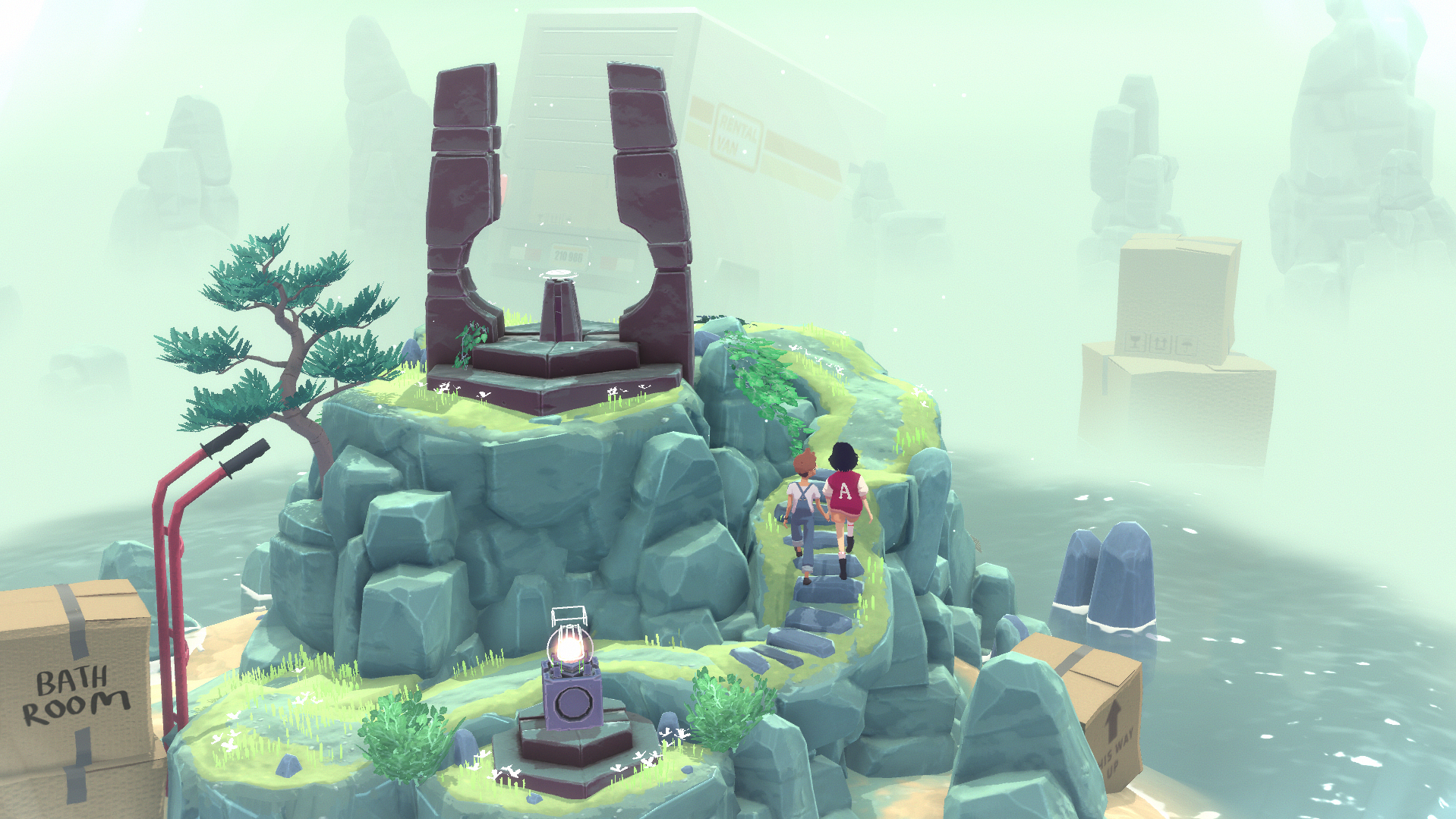 Throughout, the bigger picture looms large, but the kids instead focus on what’s interesting to them. For example, the first level is clearly the memory of Arina moving in, with boxes piled high in the background. But they are much more preoccupied with exploring this new garden area than helping to unpack, so the boxes go ignored, partially obscured by fog and untouched by the puzzles themselves.

Sometimes, you can hear the unmistakable chatter of adults doing boring grown-up talk in the background, but their voices are fuzzy and out of focus. And as the game progresses, the pair go on increasingly convoluted adventures, but reaching the end of each level shows a snapshot of what they were really up to. It all comes together into a deeply charming demonstration of how the two kids see the world, and how a bit of imagination and wonder can make blanket forts, paddling pools, and museum trips so much more than the sum of their parts. 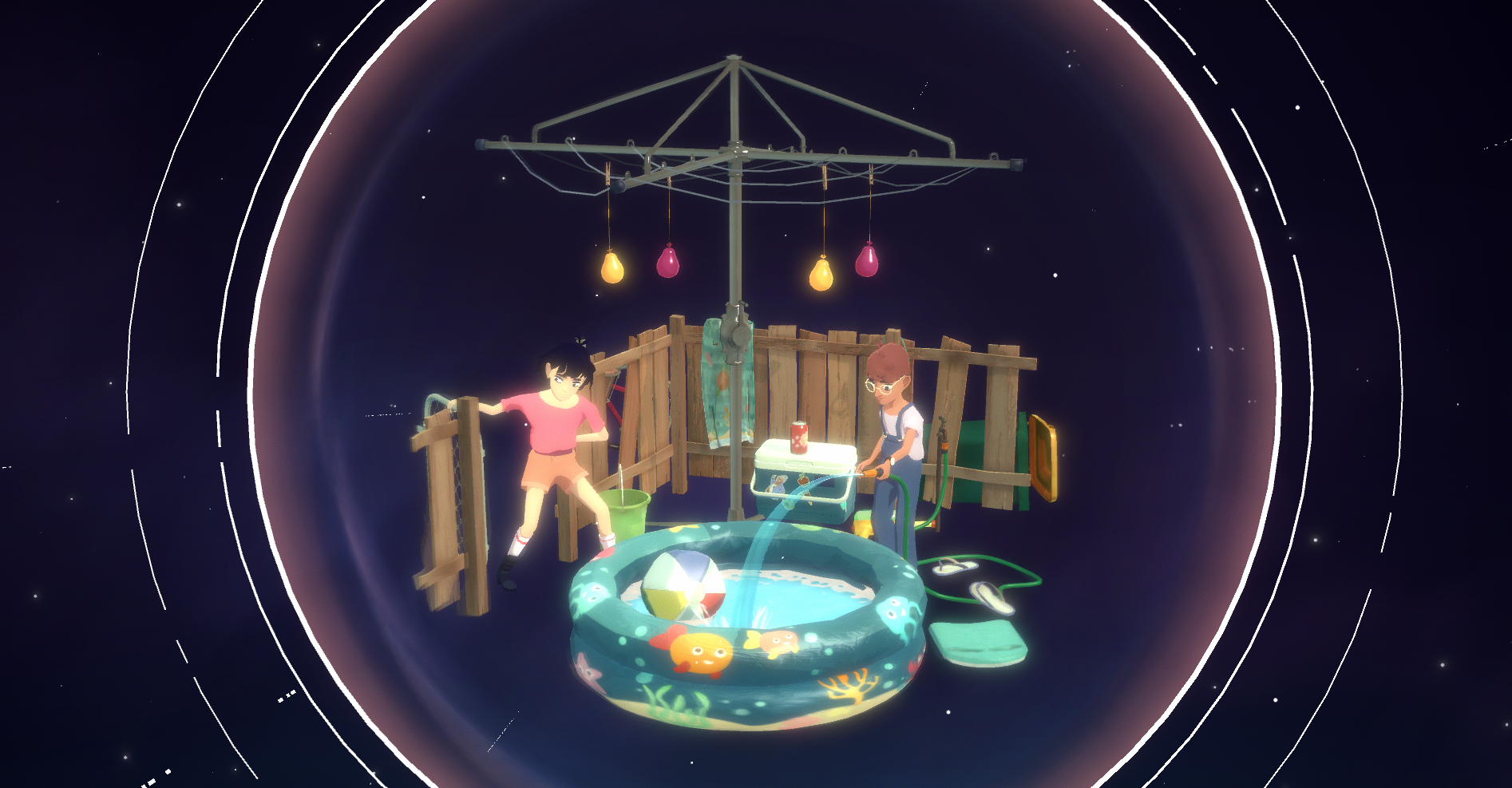 In each world, the colour palette darkens slightly (though it always remains stunning). What was once bright and vibrant becomes filtered through pinks and oranges to an eventual dusky blue, as though the sun is setting. It lends a feeling of development to the story, as though despite all the to-ing and fro-ing of time in the puzzles, things inch ever forwards and the kids grow and change. But it also ties back to the feeling of two friends talking about old times long into the night.

The final level brings together not only all of the puzzle mechanics, but all of the story motifs from earlier levels too. It’s like the conclusion after a brief lull in the conversation, as you suddenly realise you’ve been chatting away for hours about all the memories you once made. “Wow,” they seem to say. “We've done so much. I'm so glad you're my friend."