If you click on a link and make a purchase we may receive a small commission. Read our editorial policy.
Developer: Ryu Ga Gotaku
Publisher: Sega

The first thing you do in Yakuza Kiwami 2 is walk through a graveyard. As caring dad hero, Kiryu, you’re visiting the resting place of those who died at the end of the previous game. It’s a sombre moment, a cemetery visit with your adoptive daughter to pay respects to loved ones killed in terrible circumstances. You bow your head and inspect the graves.

Then a bunch of mobsters with guns show up and you kick them all in the belly. Hiiii-YAH.

Yakuza games, I have happily learned, are a tour de folly, as ridiculous as they are lovable. In that same opening scene, before the bad men show up, a giant dialogue box pops up as you inspect one of the graves. “Remember the events of one year ago?” it asks. “Yes – No.” 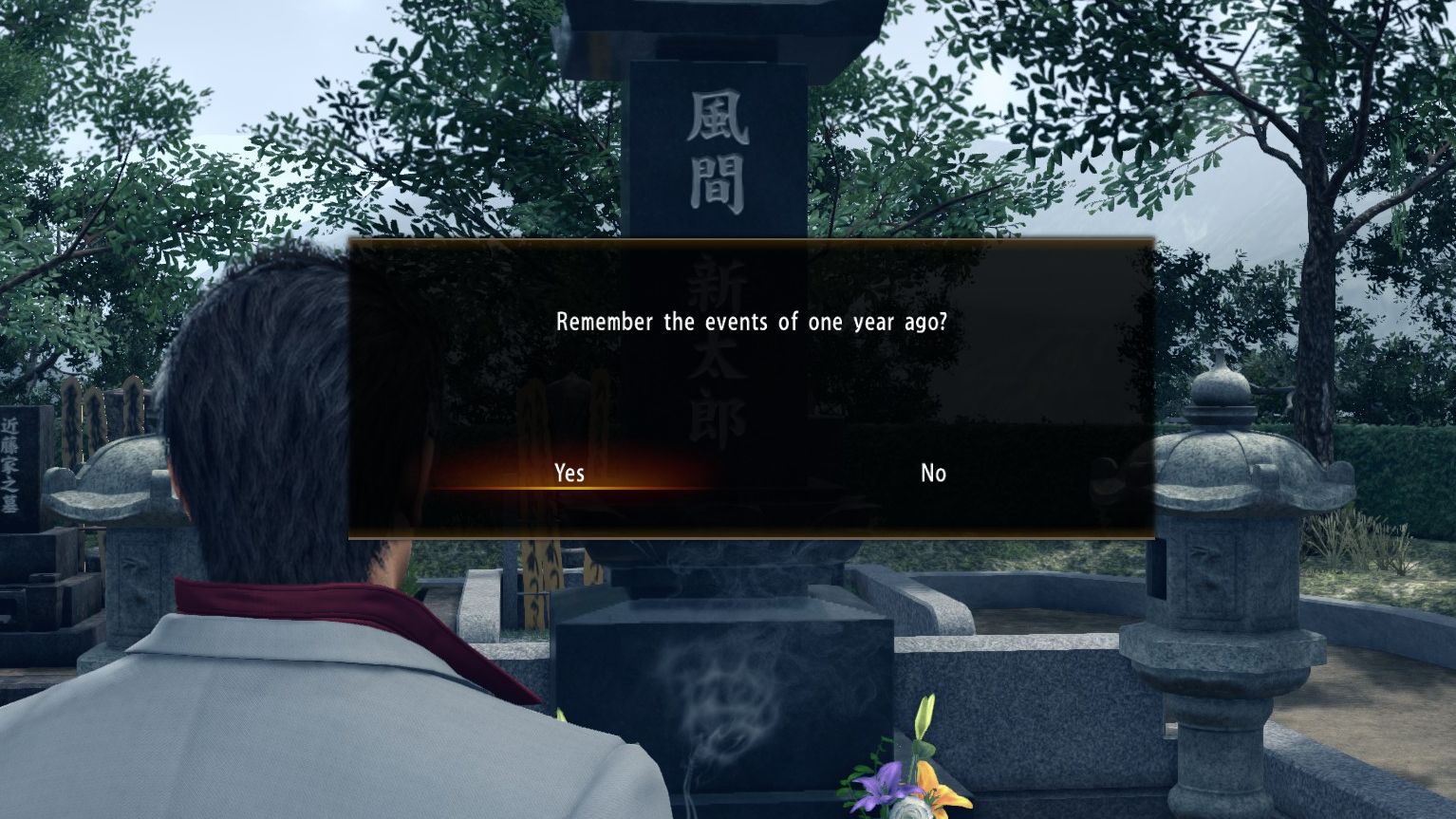 It’s offering a catch-up video to watch, a kind of “previously on Yakuza Kiwami”. But the yes or no choice in the middle of a grave visit, the suggestion that this is how memory works, that you can just tap the d-pad in your cerebral cortex and select “no” - it’s all too much. This is how the first big laugh of Kiwami 2 attacked my torso. And those spasms have kept coming, ten hours into the rib-cracking and advice-dispensing. I’m so glad to have embraced these soapy games of chucklesome violence. My only regret is that it took so long.

Yakuza Kiwami 2, for those even slower than I, is another remake of the old Yakuza games. It’s the second entry (or third - it's complicated) in the story of Kiryu, a former crime man who punches his way through the fictional city district of Kamurocho. It’s Grand Theft Auto, except there are no cars and the protagonist is not an unlikeable asshat. 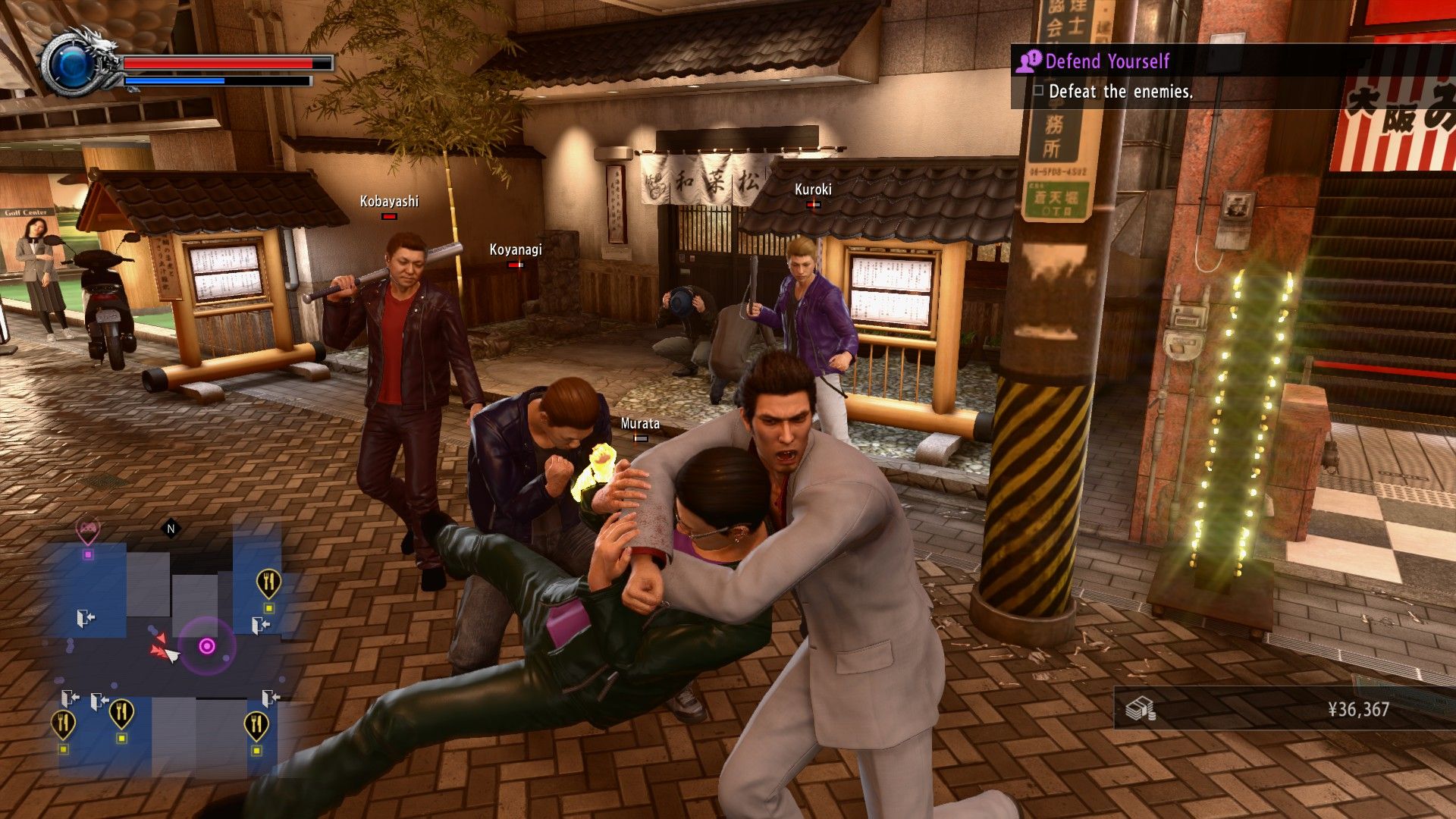 As the opening moments suggest, it is another outlandish criminal caper with all the incredulity of a telenovela. A melodrama of slow zooms, brimming over with orphans, secret bookcases, no-nonsense matriarchs, wise old men and any other archetype or cliché you can throw a giant comedy vase at. It has a plot so refreshingly stupid and elaborate that, at one point, a cool-headed crime boss hires a man to shoot at you from a rooftop – but purposefully miss - just to keep you on your toes.

“Now he knows not to trust anyone,” the conspirator explains to a lackey. If only we all had rivals this wise.

This time Kiryu is trying to prevent all-out war between the two major Yakuza factions of east and west Japan. Like the previous game, you team up with a cop, but this time it’s a hardened orphan-turned-detective Sayama, who normally likes to incarcerate her mobsters, not work with them. 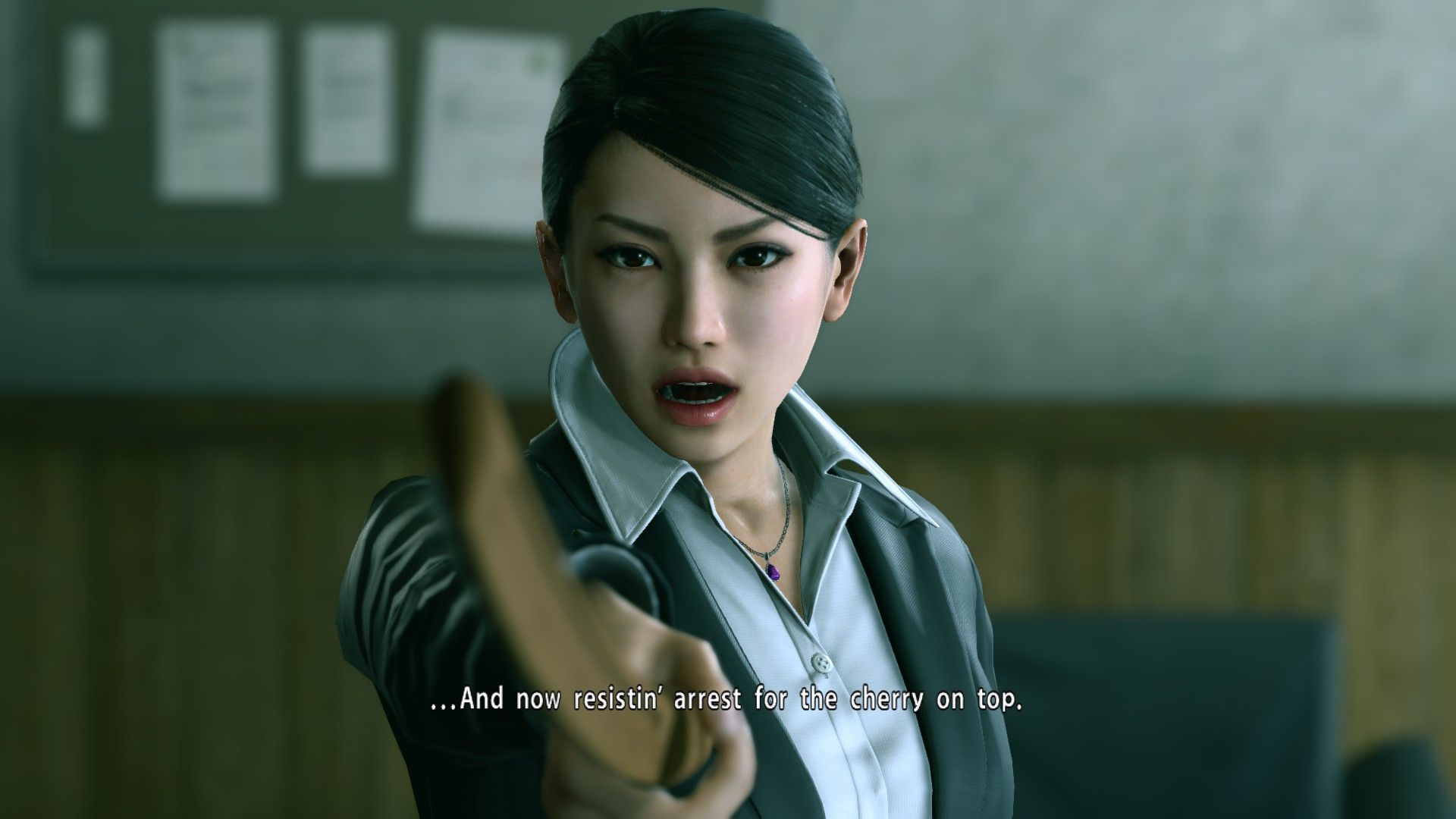 She is also the obvious love interest. Not that Kiryu will admit it, he’s too busy being a gold-hearted thug with fists of steel.

Street-fighting is still the universal problem solver, and it’s a bit less wild to control this time. You perform light punches, heavy kicks, and grabs, wild throws that launch foes into wooden benches. You can hold down ‘Y’ to charge up a special dropkick attack (“REAL YAKUZA USE A GAMEPAD”, as the game screams in its opening splash screen). You can still pick up traffic cones or plant pots or bikes and use them to smack your attackers over the bonce. And the “heat actions” are also back. Those context-sensitive finishing skullcracks, screen-shaking finales of assault and battery that see you breaking a litter bin over a man’s cowering body, or crunching his head into the nearest van. “You always try to punch your problems,” observes one of Kiryu’s early frenemies. He is 100 percent correct. 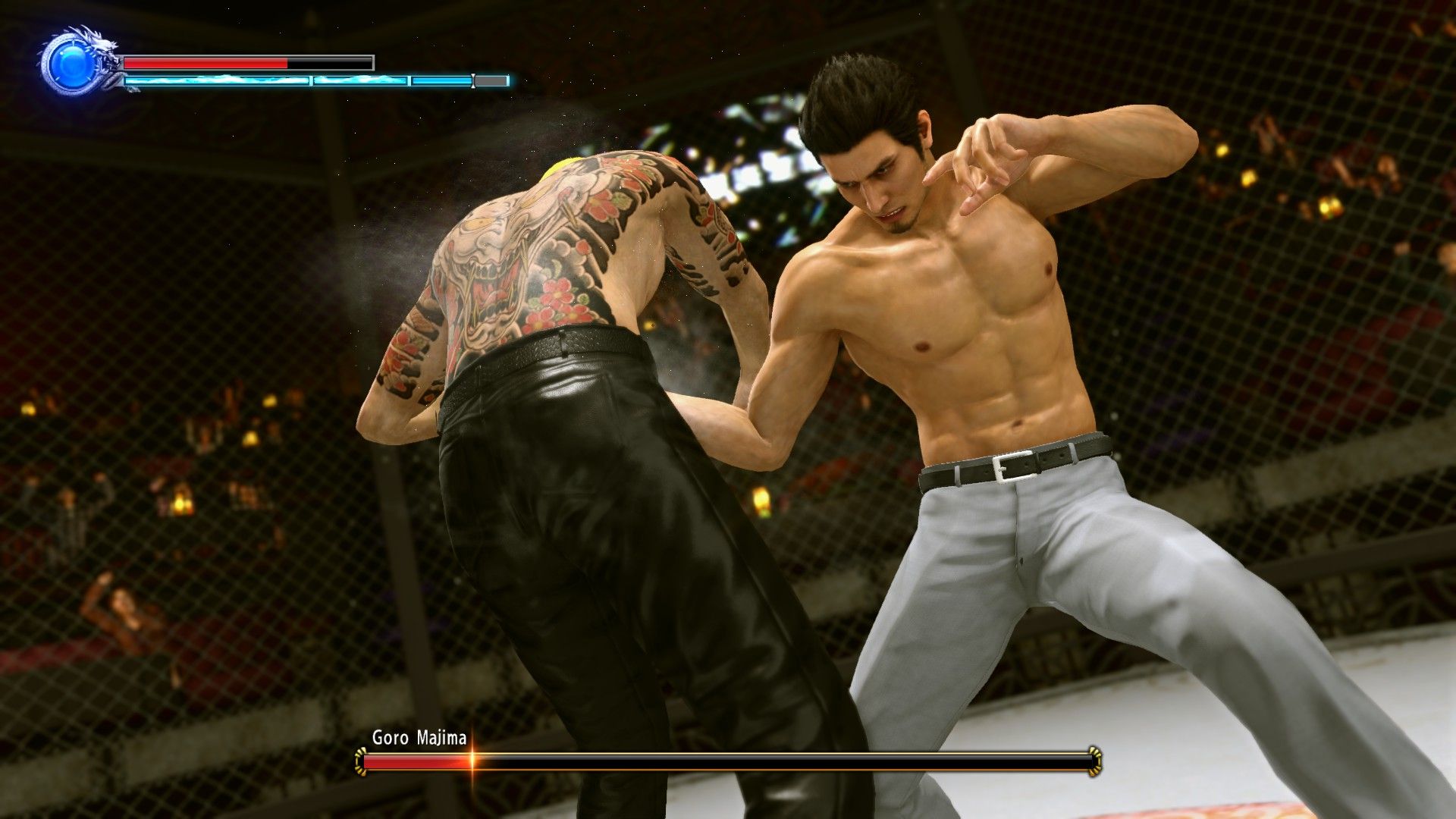 There is a major and, I’d say, lamentable difference in the brawling. The different fighting styles (the hulking Beast style, the speedy Rush style, and so on) are all gone, replaced with one straightforward style of pugilism. I miss swapping between those different punchforms. In Yakuza, the biffing is repetitive by its nature, and you basically have to swap things around and try out newly unlocked moves to stay sane. So the disappearance of that variety box of moves makes dust-ups feel leaner but less colourful. 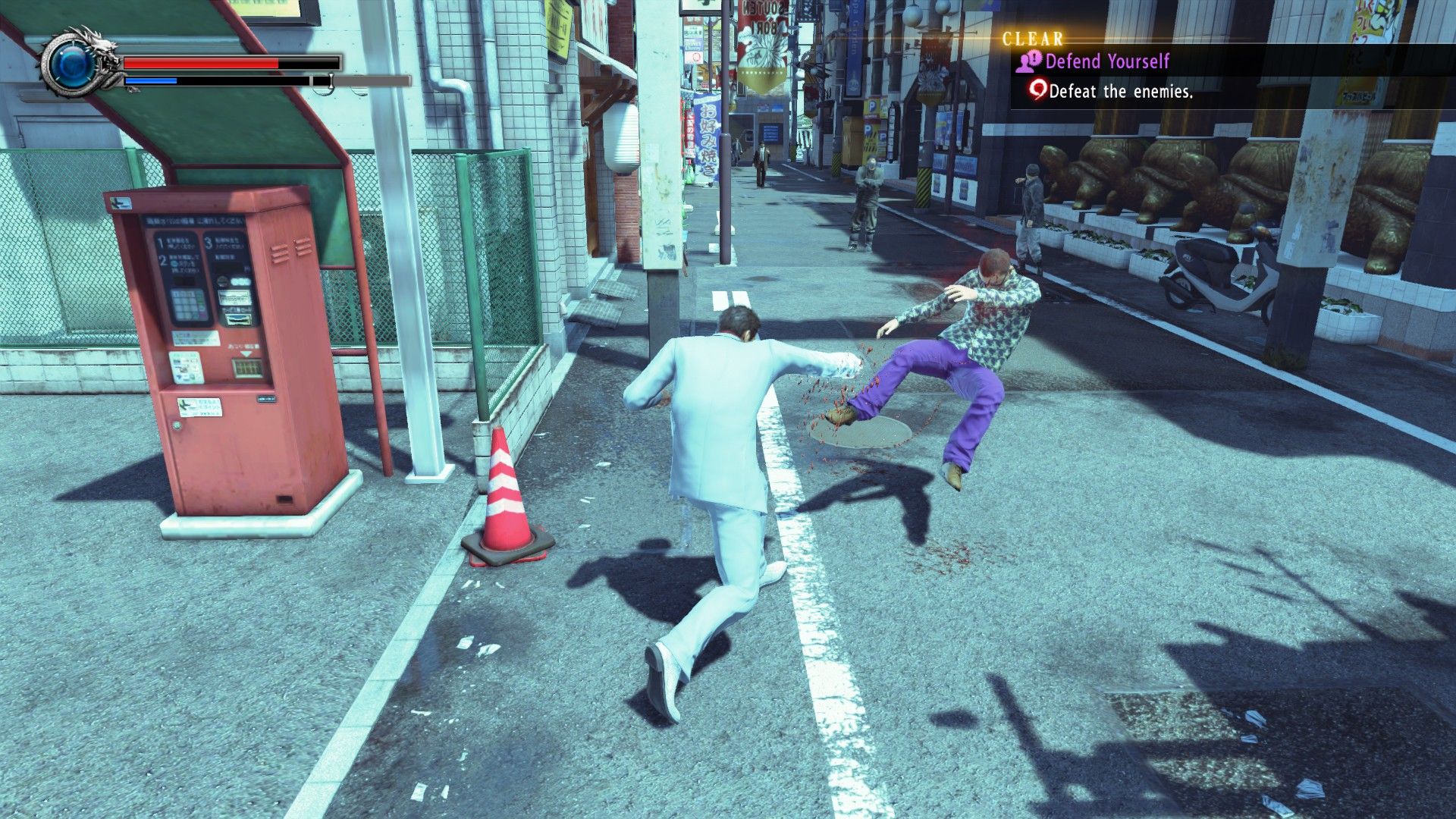 The skill tree behind those styles is also gone. It laid everything out in a cheery map of punching techniques. But here it’s replaced by a plain, workmanlike table which makes levelling-up an unexciting exercise of picking the next vaguely useful technique you can afford. Although some techniques do compliment the wackiness of fights. After helping a person-in-need on the street, they sometimes pledge themselves as an “ally”. Which means you can unlock special moves with names like “essence of guitar” or “essence of comedy” in which that ally will throw you a useful weapon in the middle of a brawl, with which to knock out some teeth. 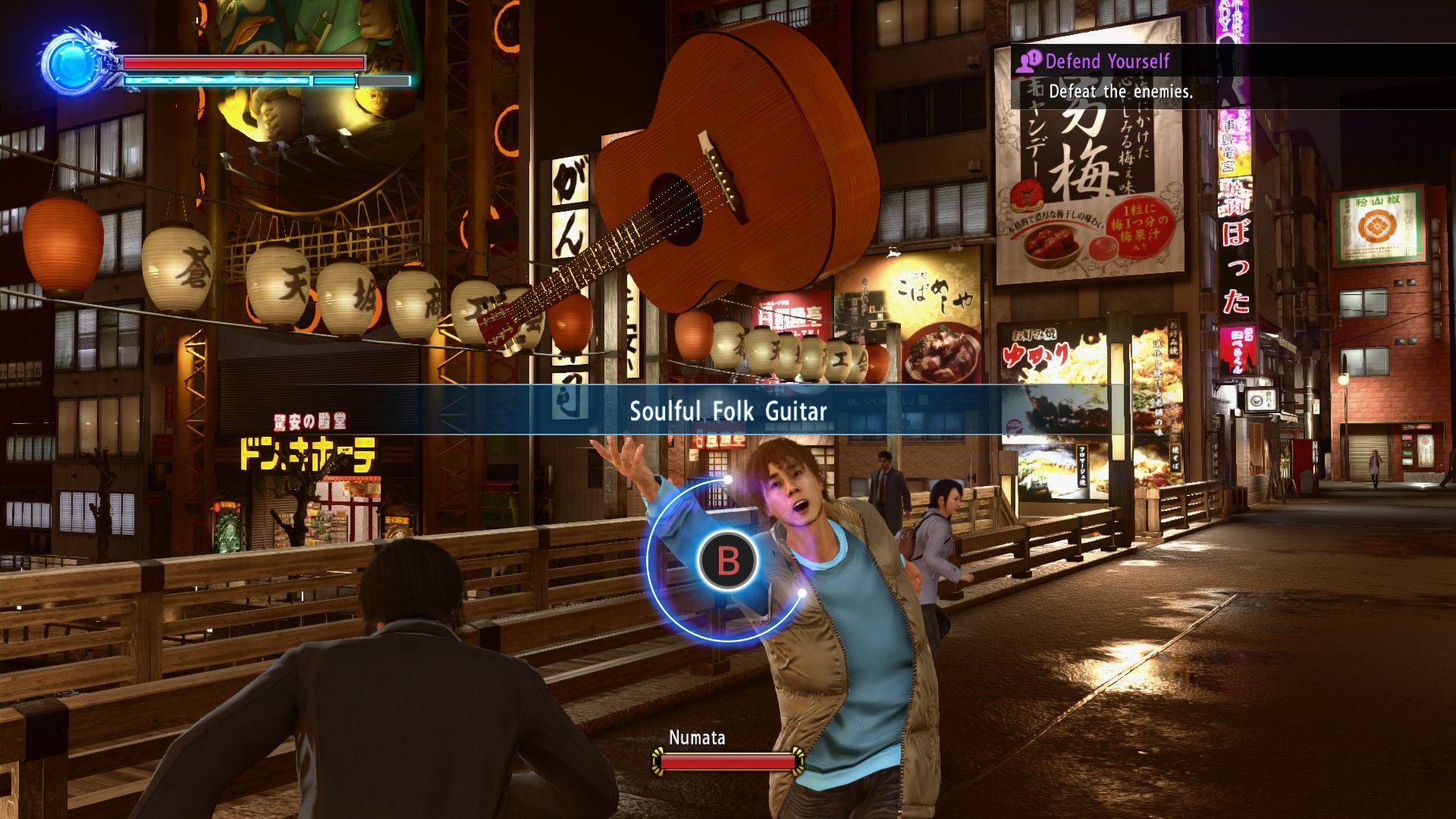 It’s a good reason not to ignore side quests. But to be honest, I didn’t really need that excuse, since the side quests are as joyous and silly here as they were in Kiwami number one. There’s a side quest about being a model in a photo shoot run by an eccentric artist wearing a pair of speedos. 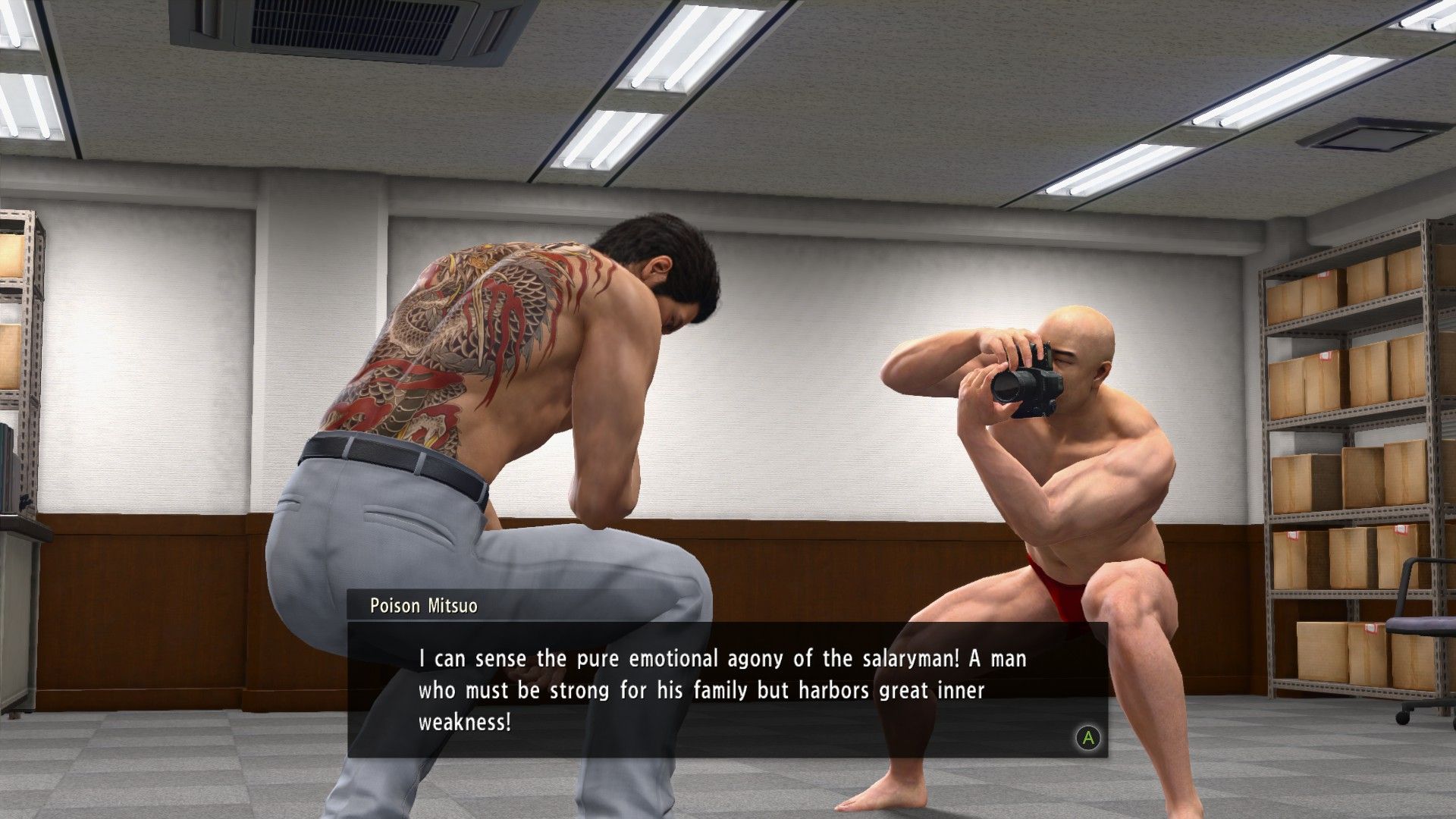 There’s a side quest about beating up a load of gangsters dressed as babies. 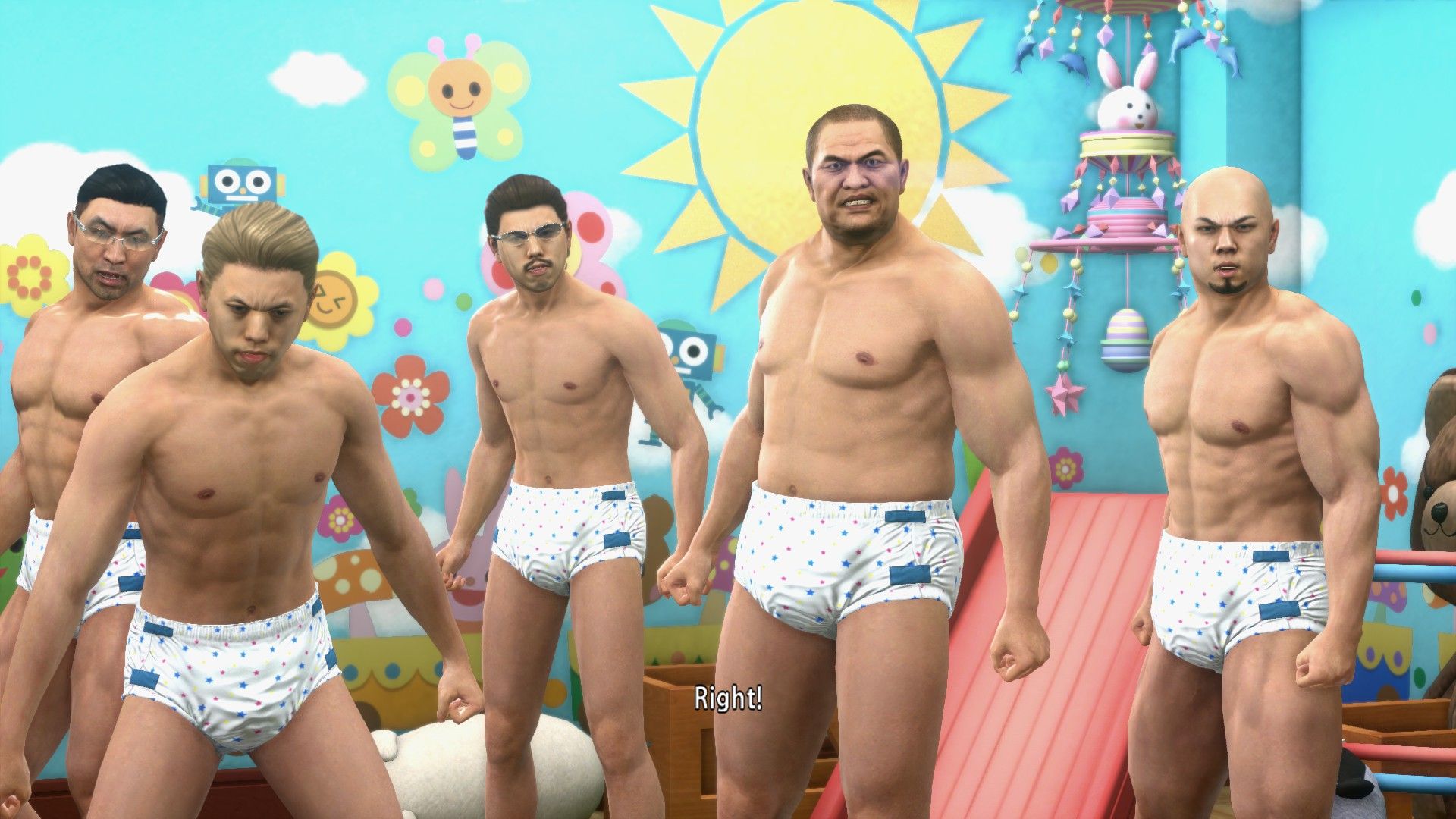 There’s a side quest about beating an old rich dude in Virtua Fighter 2. 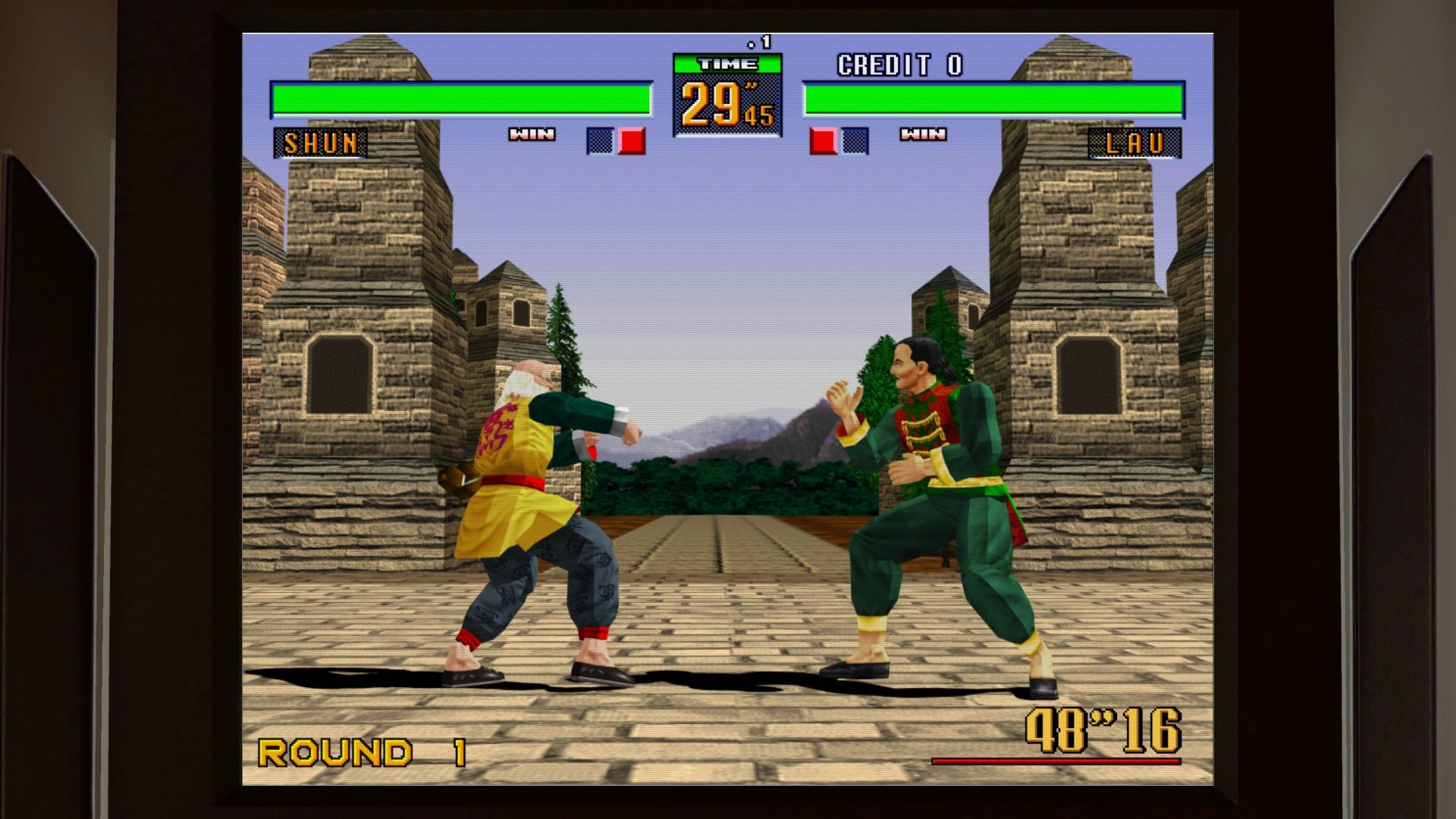 Not all of these result in allies, but they’re so daft and delightful, such a fun distraction, that it’s hard to care. Side quests here often trigger as you walk down a particular alley, without even asking if you want to get involved. In most games, I would be infuriated if it kept interrupting my strolls towards the next main mission. Here, I welcome every tug of my suit jacket’s sleeve. The people of Kamurocho are hopeless idiots and I will never stop helping them. 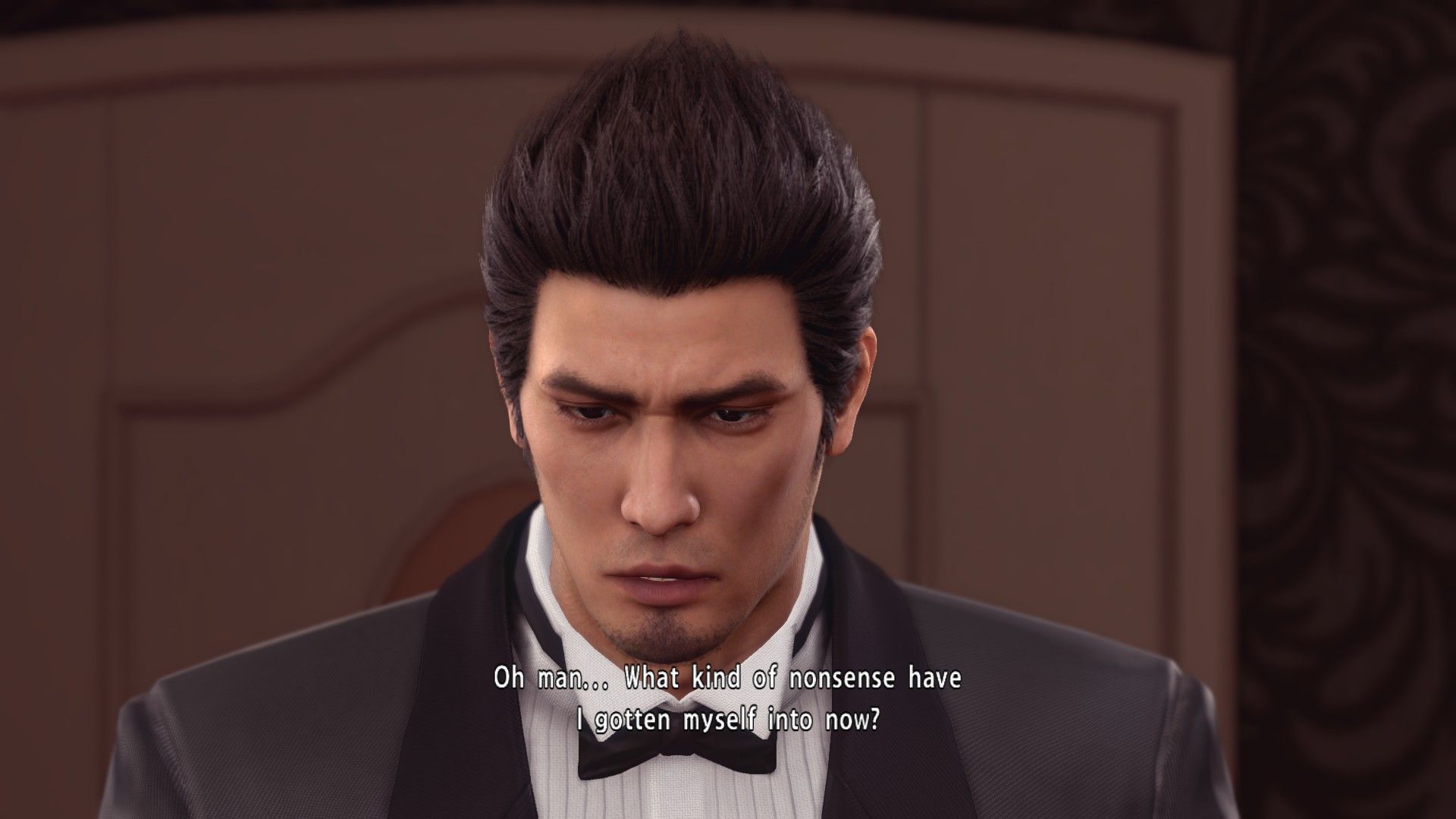 While we’re talking about Kamurocho, the city has been given a makeover, but not a drastic one. It shines in places it never shined, fine neon calligraphy has been rendered even finer, the ramen bowls look more noodlesome than ever. But the layout of the mini-town is the same. Doubtless some will find the recycling of this red light district tiresome, after having stormed around it for two other games. I’m not that bothered. There’s something comforting about walking the familiar streets and back alleys, knowing your way around well enough to turn off the minimap and soujourn around like a (really violent) tourist. 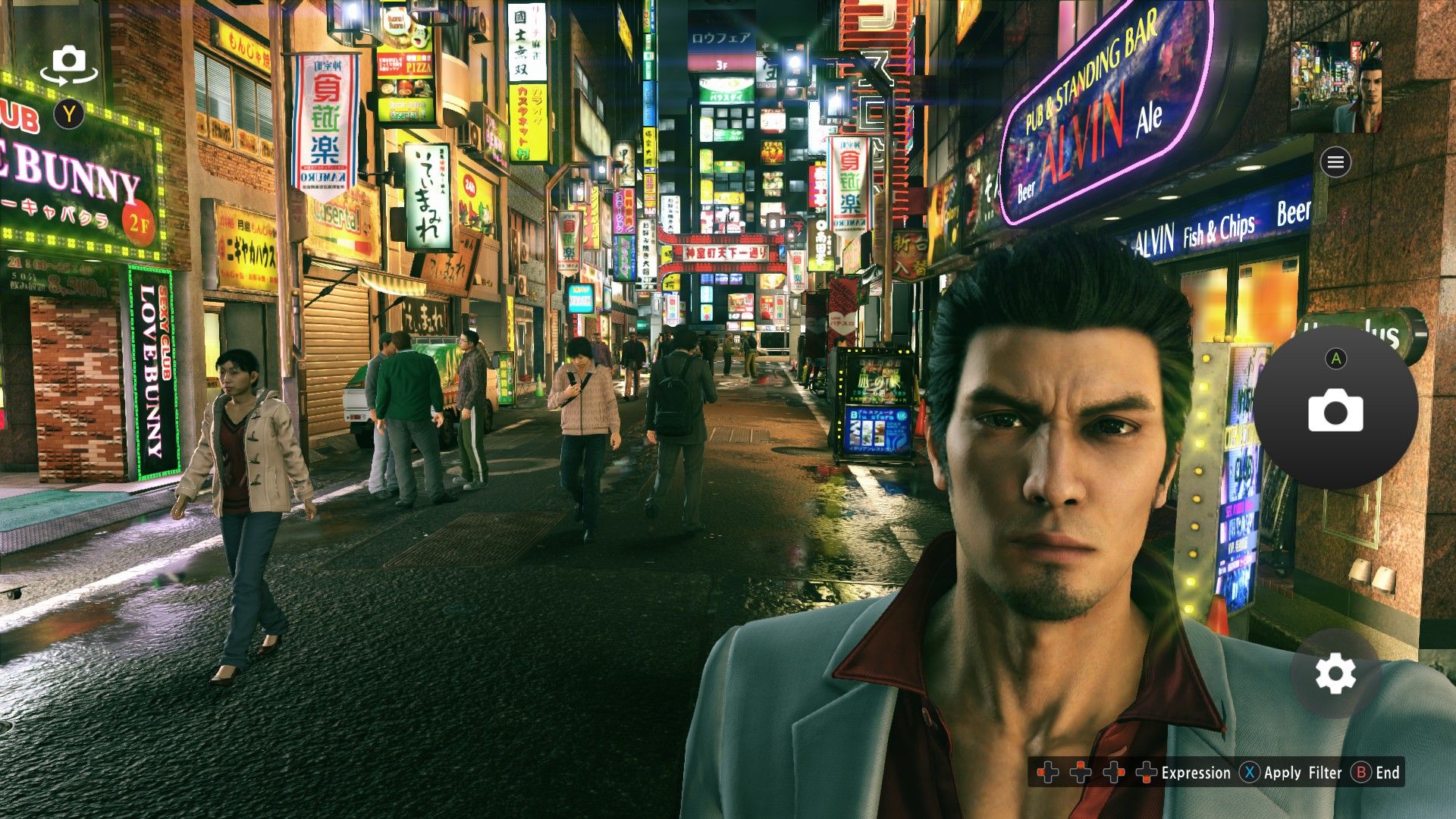 It helps that you also visit Sotenbori this time, a whole other city district in Osaka (which players of Yakuza 0 will recognise) and that you'll also get to play as your old friend, the mono-optic Majima, a fighter with his own moves (or so I've seen in videos, I haven't reached this part yet). But the real reason I don’t mind the familiar settings is Kiryu and co. All the soap opera splendour of his ridiculous life is still here. What might be tonal whiplash in other stories is here a rolling daftness that makes every chapter snowball toward a climactic absurdity. This is a game in which you and a gangster can go from having a grudging fight in an alleyway, to sharing some canned espresso on a bullet train. 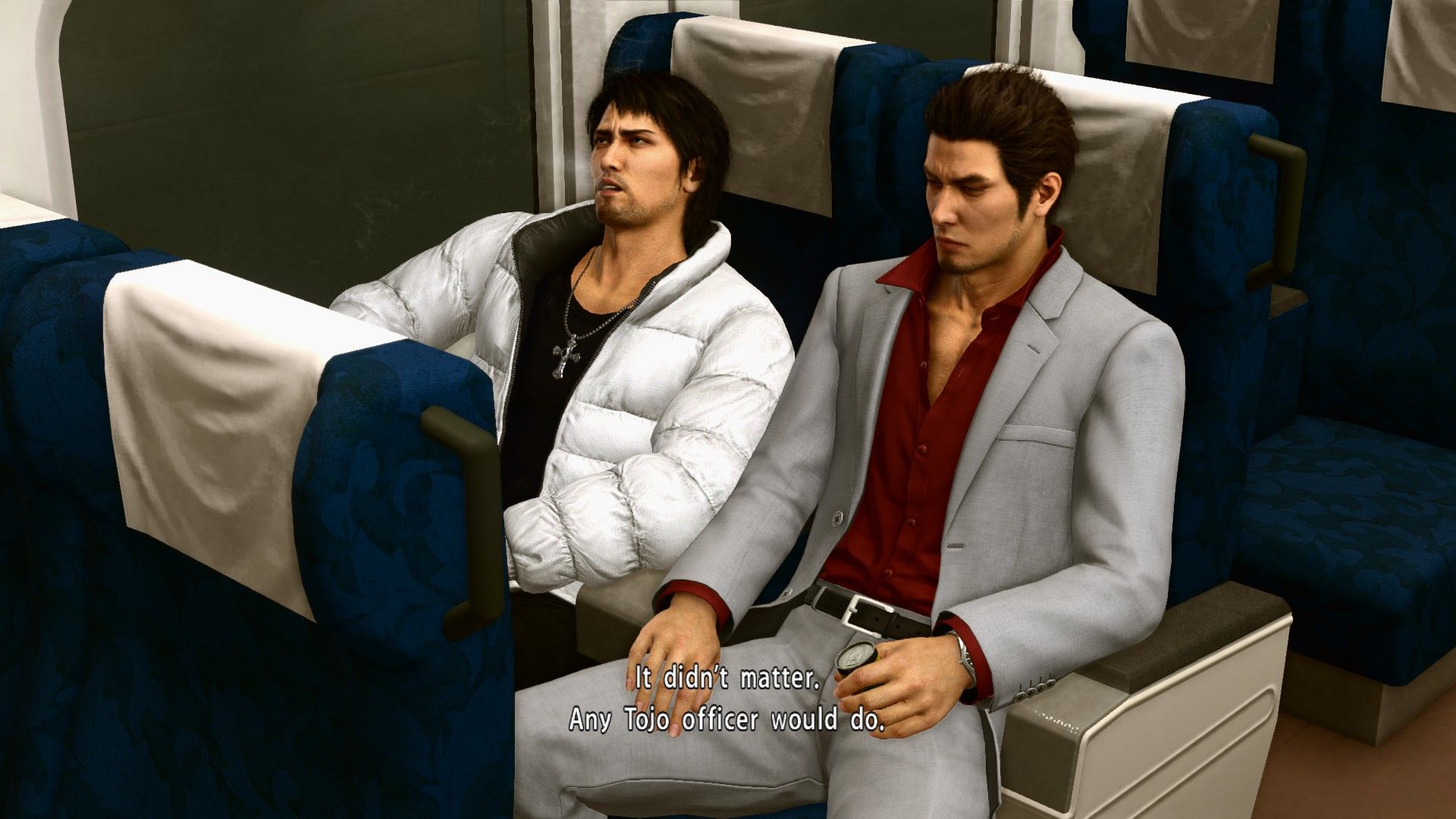 That hectic lane-switching from serious to silly isn’t only in the cinematics between pummellings. It’s in the frequent musical slides from serious bwomp to wacky jazz. The hard left-turns from funny guitar to synth organ anytime there’s a vaguely heartfelt moment. It’s in the minute-by-minute walking about. At one point, pedestrians run along the streets of Sotenbori, murmuring about a bombing on the news, urging you to follow them down the street to watch the disaster on a big screen nearby, the game overloading the player with the urgency and fear and gravity of an awful terrorist attack that has likely killed dozens of people.

Or you could stop to play a minigame about pissing. 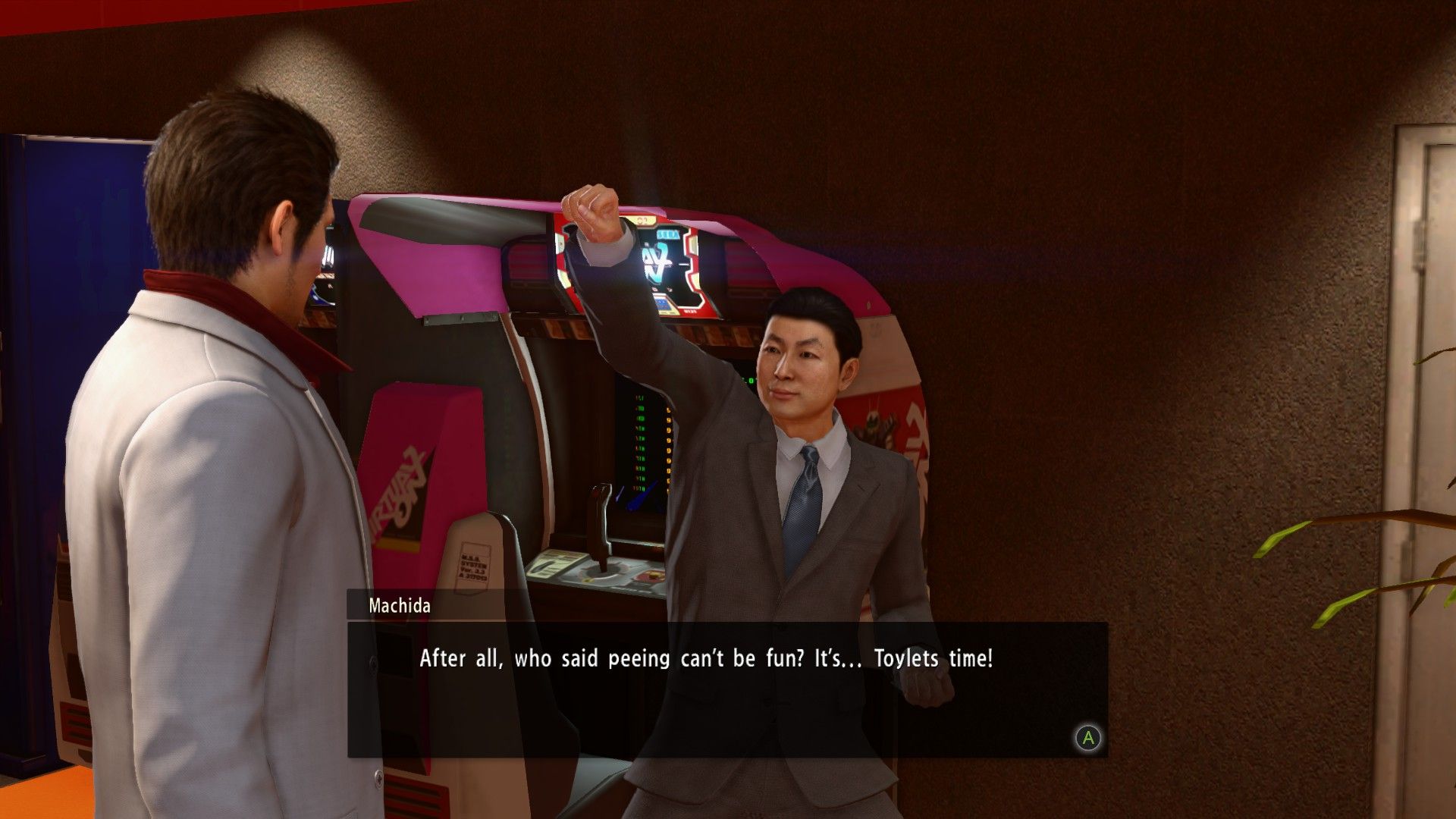 Minigames are, as ever, part of the tomfoolery. It has added golf this time. And there’s still the usual suspects: Shogi, Darts, Karaoke, casino games. But you’ve also got the cabaret club management of Yakuza 0, and a new clan battling minigame featuring Majima. This is a really basic top-down RTS about construction workers knocking seven shades of cement out of each other, because sure, why not. 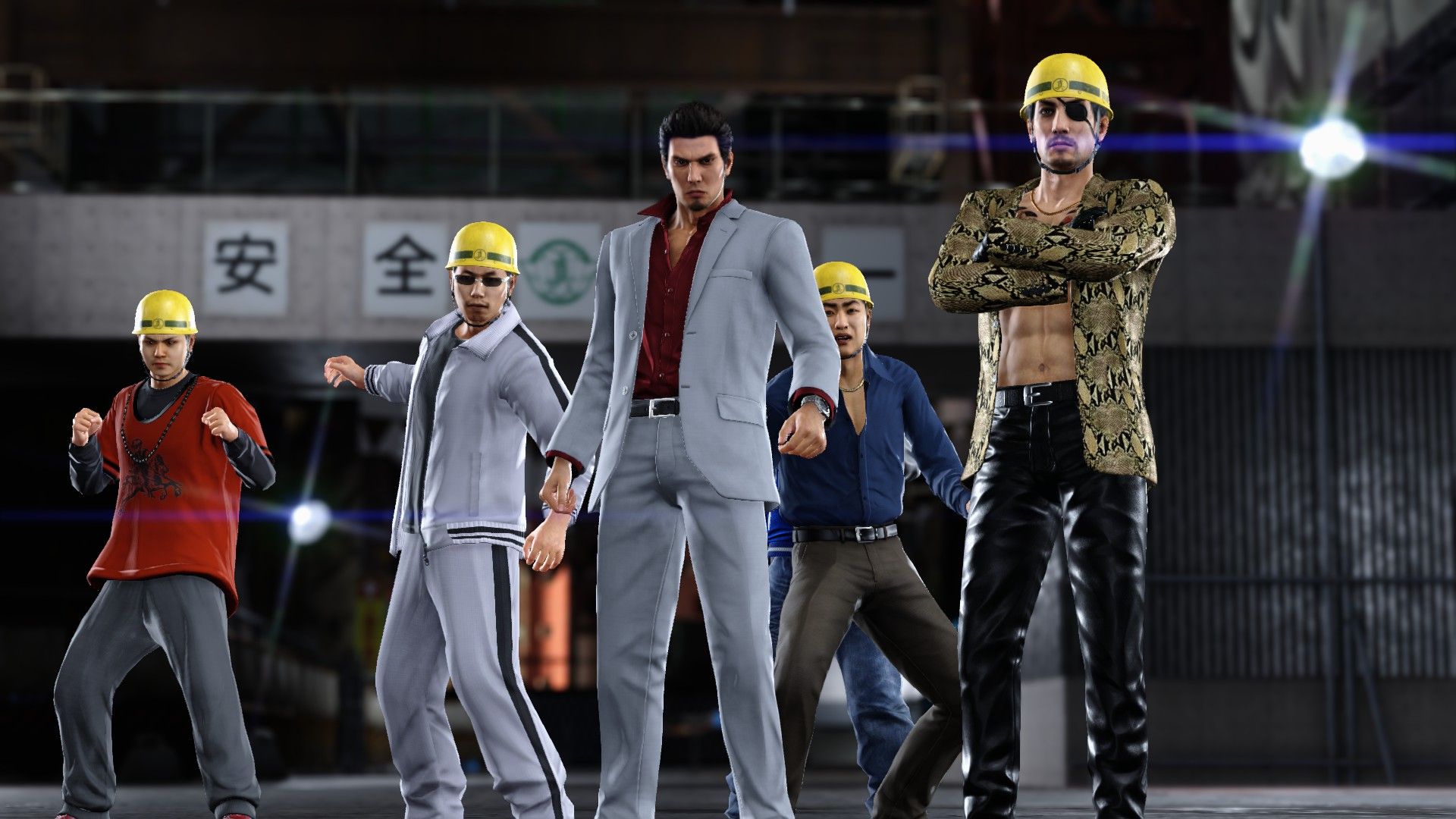 All these are sideshows to the main event: the unfolding morality tale of Kiryu and whatever organised crime dungheap he’s got himself into this time. You don’t play for the claw machine, you play for the next laugh. One scene sees an attacker smash a champagne bottle over the back of our hero’s head. Kiryu does not bleed, he does not even react. The bottle shatters as if he is made of some immovable alien matter. It is reassuring, after ripping faces off in Mortal Kombat 11’s story (aka poor man’s Avengers) to come back to this. This is how you do Trash-with-a-capital-T.

To turn off the praisehose for a second, there is still a peripheral creepiness to a lot of the red light district. It wants to titillate with its brothels and S & M side stories, even as it gives Kiryu the role of straight-laced fellow who isn’t into that sort of thing, no, honestly, I couldn't possibly. It’s a kinky place, which is fine, but some of that kinkiness is inevitably of the “hurr boobs” variety or otherwise questionable. The Yakuzas, as much as I’ve come to adore them, do have a sleaze problem. 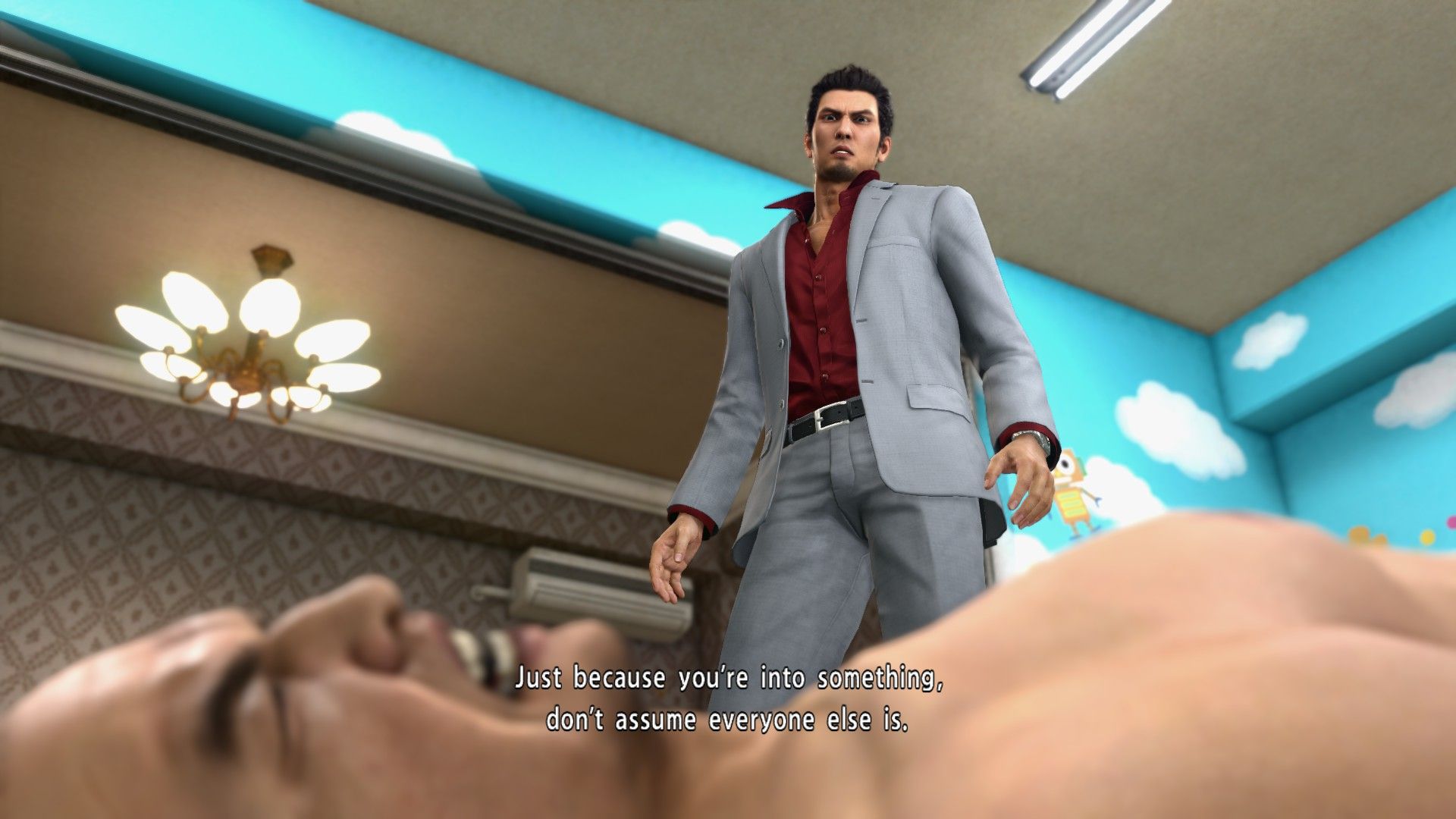 Graham has spoken before about a tolerance for “anime bullshit” and I think you can likewise grow a tolerance for “Yakuza bullshit” such as this. You could reasonably argue that tolerance is not limited to the gratuitous side missions to buy underwear for your cop friend, or whatever. You might need to have a tolerance for the gamey bits too. The early fights (unblessed by special moves), the forced minigames, the repetitious city-strolling. In other games, all this might be insufferable. But I’m fine with it here, because there is a scene where Kiryu kicks a fully grown tiger out of the air.

That’s the decider. If you’ve had your fill of fighting and walking the same city streets, and don’t really care for these tattooed agony uncles anymore, then off you go (pfft, good riddance). But if you don’t mind button bashing through some brawls, just to see more of these good fellas solving bad problems with their strong fists and stern words, Yakuza Kiwami 2 is ready, once again, to get ridiculous.