If you click on a link and make a purchase we may receive a small commission. Read our editorial policy.
Developer: Ryu Ga Gotaku
Publisher: SEGA

Yakuza Kiwami is a world of outlandish violence in which you play a kind of unmasked Batman in an out-of-date suit. Our hero, Kiryu, doesn’t kill. He helps people find their glasses, he gives coats to the homeless, and he beats up hundreds of bad people. That SEGA ever called this series “Yakuza” is a wondrous misnomer. It should be called “Helpful Strong Man Versus Tokyo”. Being a newcomer, I can’t say with authority that this remake of the mid-2000s Yakuza for PlayStation 2 is the best introduction to this realm of pugilistic do-goodery. It does feel dated at times, and repetitive. But after 15 hours of hitting thugs with bicycles and rescuing defenceless animals from the street, it has certainly produced another Kiryu acolyte.

story
That 15 hours hasn't seen me to the end of the story yet, but to explain its opening briefly: our boy takes the blame for a high-profile murder and goes to the clink for 10 years. You get out and proceed to run about the district of Kamurocho, doing story missions between a bounty of minigames, side quests and semi-random fist-fights. It’s basically an open-world soap opera featuring cartoonishly ugly crime bosses and an unhinged hit man called Majima who chases you around the streets of a fictional Tokyo red light district with comical tenacity. This snake-skin jacket psychopath lurks in the streets and alleyways, screaming “Kiryu-chan!” with glee, as if he too knows this is just a stupid videogame about fighting. 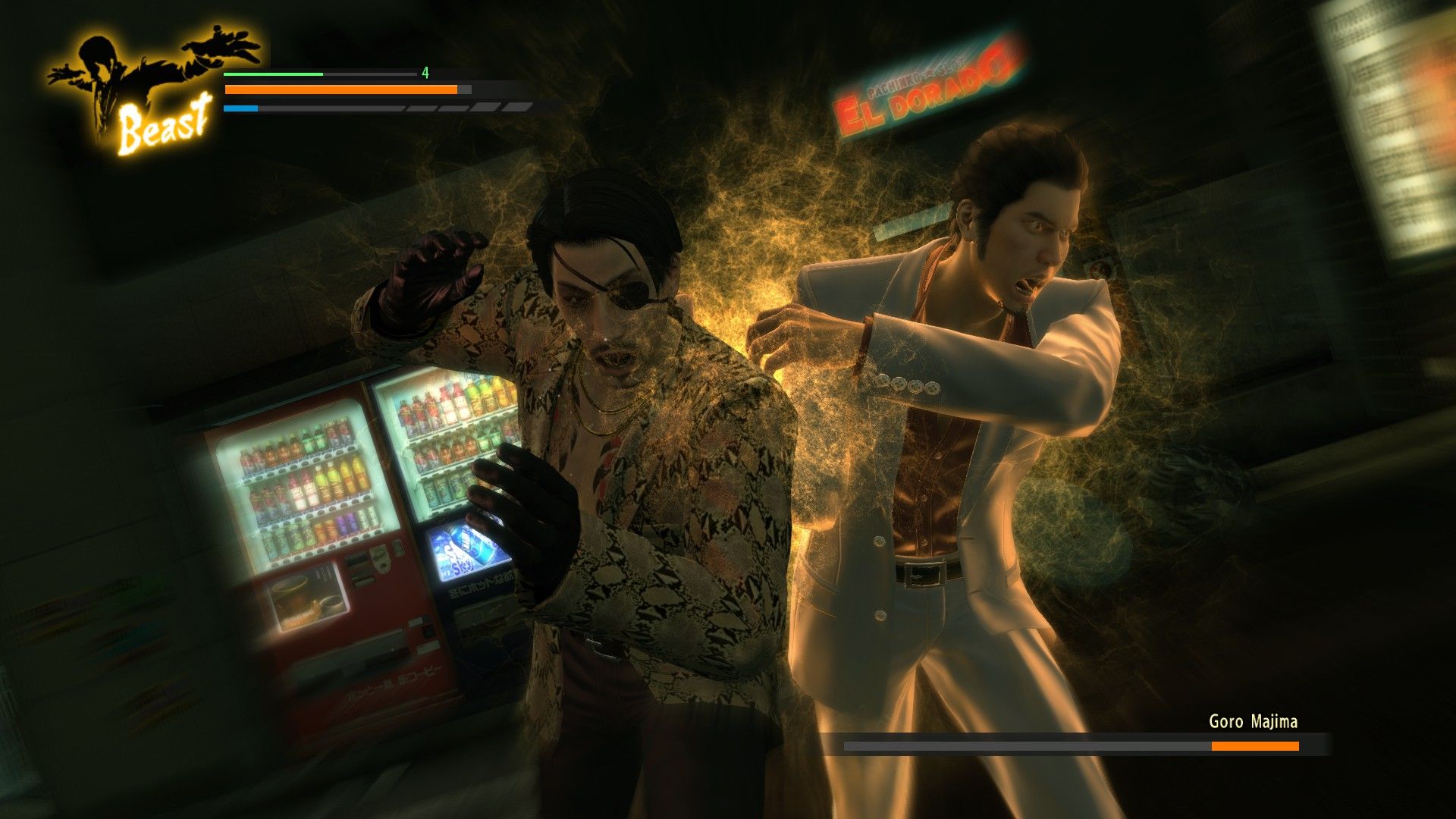 This fighting is a vaguely satisfying mix of button-mashing until all your foes are knocked out, and pulling off special moves when a particularly strong enemy needs to be walloped in a specific way. It’s a bit wobbly. It’s hard to single out one baddie in a crowd, and years of Batman Arkham copycats have trained us to expect enemies to take turns hitting us in some discernible pattern, with warnings or slowdowns offered to make us feel like minor deities with quick reflexes. There are no such gimmicks here. You get four fighting styles to swap on the fly (the quick-fisted “Rush” style, the heavy-hitting “Beast” style, etc) but it’s mostly a chaotic free-for-all. Yet there’s just enough boisterous physical comedy to the brawling to forgive its jank. Within five minutes, you are knocking a loan shark across his office with his own golf club. 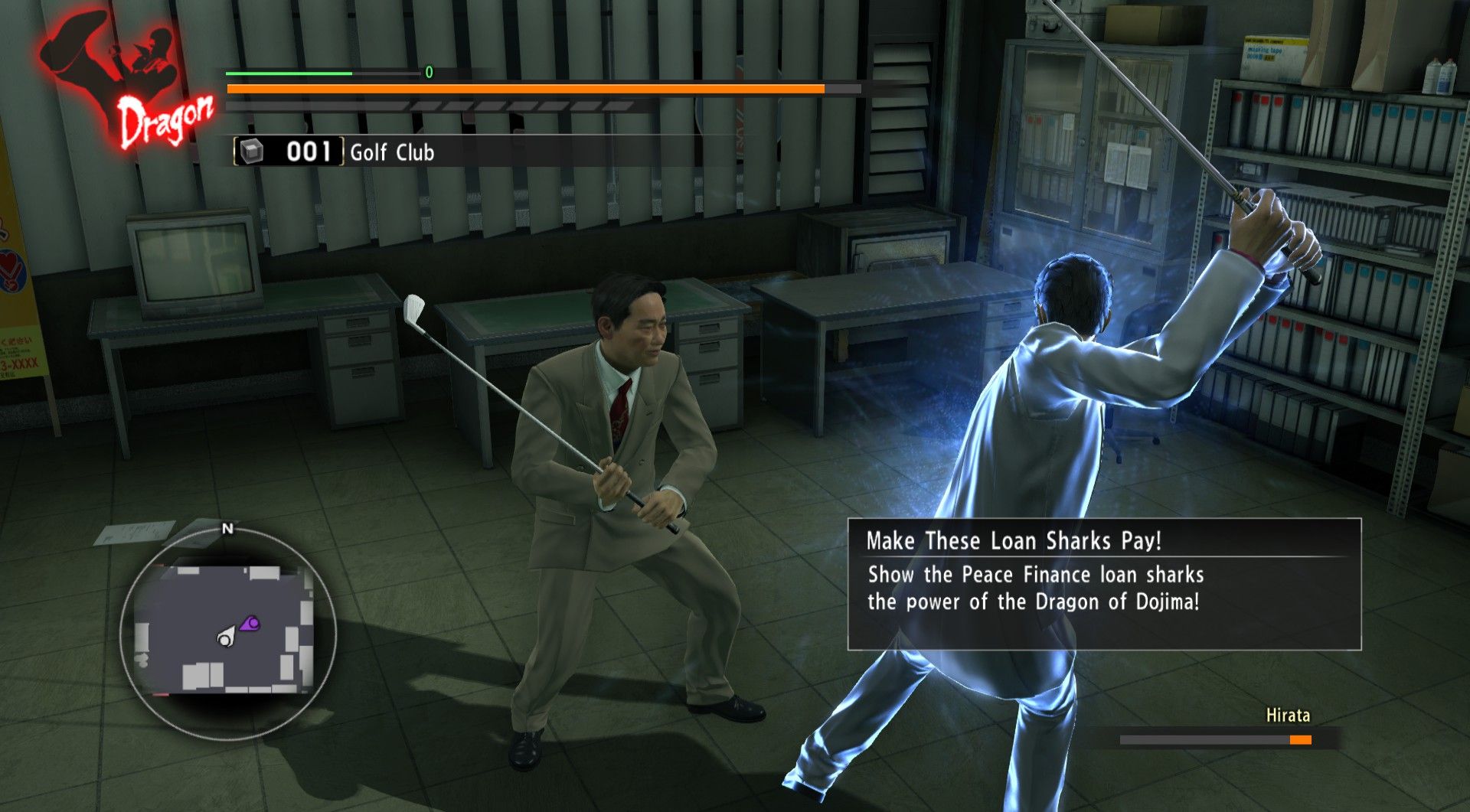 There’s a slime gun that slips up thugs, a giant marlin with a bazooka in its mouth, baseball bats, wooden katanas. If there is a motorcycle nearby, you can pick it up as if it were made of polystyrene and bash your opponent over the head. Your enemies will bleed a lot, they will fly several meters when you land the final blow. Sometimes you will suplex them into a railing. But they won’t die. Kiryu is a beast, but he’s not a monster. 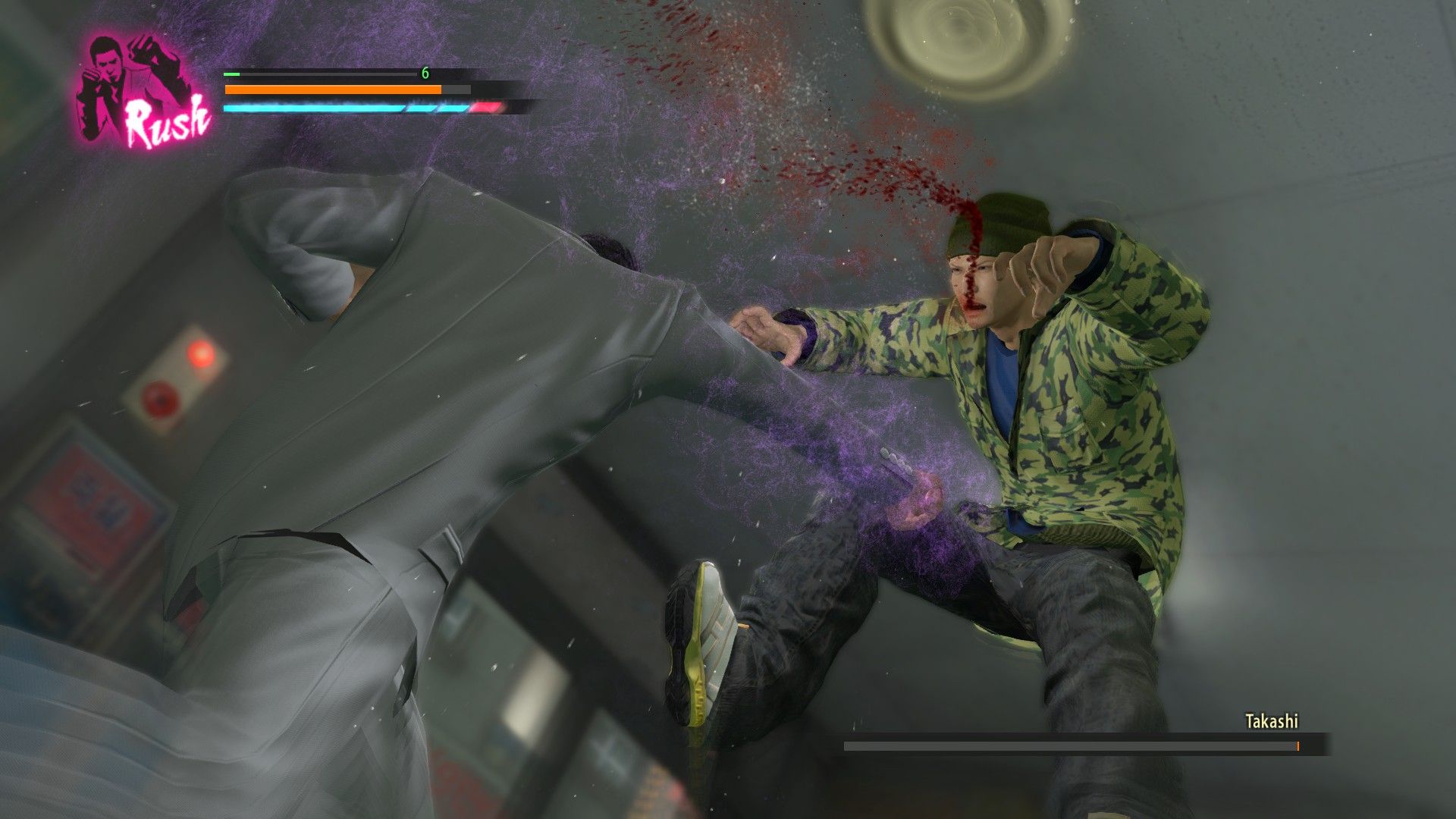 He is also the good lad who holds the whole story together. In one chapter, Kiryu rescues a little girl from a blood-spattered crime scene, and keeping her out of trouble while trying to find her mum will be central to the plot. But it's not enough for Kiryu to take an adoptive daughter under his wing, because the minute they leave the crime scene he is faced with some lowlives throwing rocks at a puppy. He is furious. Without hesitating, you are tasked with beating 10 of these street thugs senseless in retaliation for their animal cruelty. 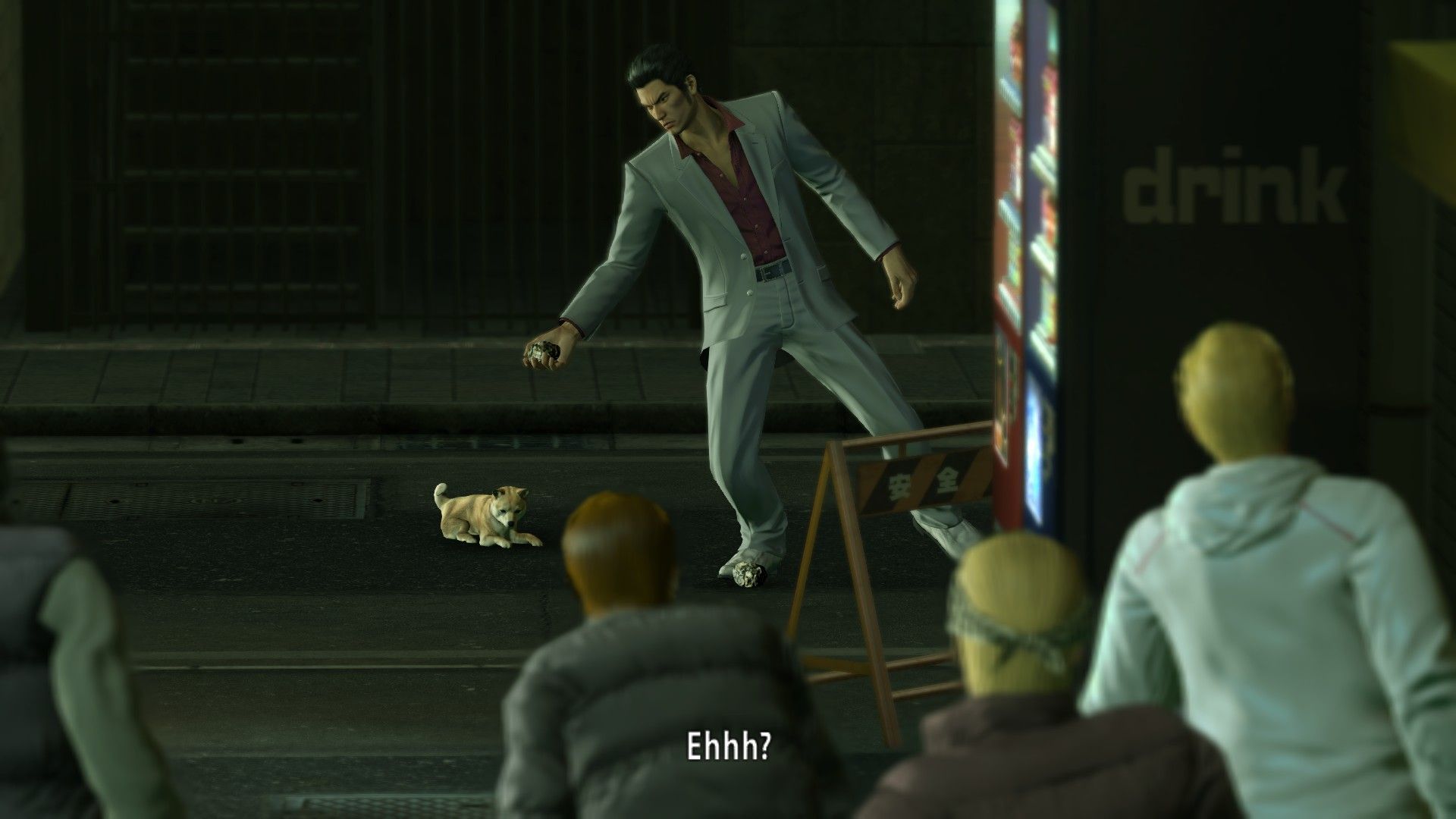 You spend one minute cracking skulls together in this fight scene and the remaining 10 minutes of the quest buying dog food and putting water in a dish. Yakuza’s creators do not want to establish Kazuma Kiryu as a goodie, they want to establish him as THE goodie. The golden standard for strongdads everywhere. Yet this is just one example. You can't walk 100 meters on the street without stumbling on a person in need, whom Kiryu will obviously help. The density of his good deeds is so high, it reminds me of that oft-quoted fact about Saturn. If you balled all of his helpful acts together and put them in a big enough bath, they would float. 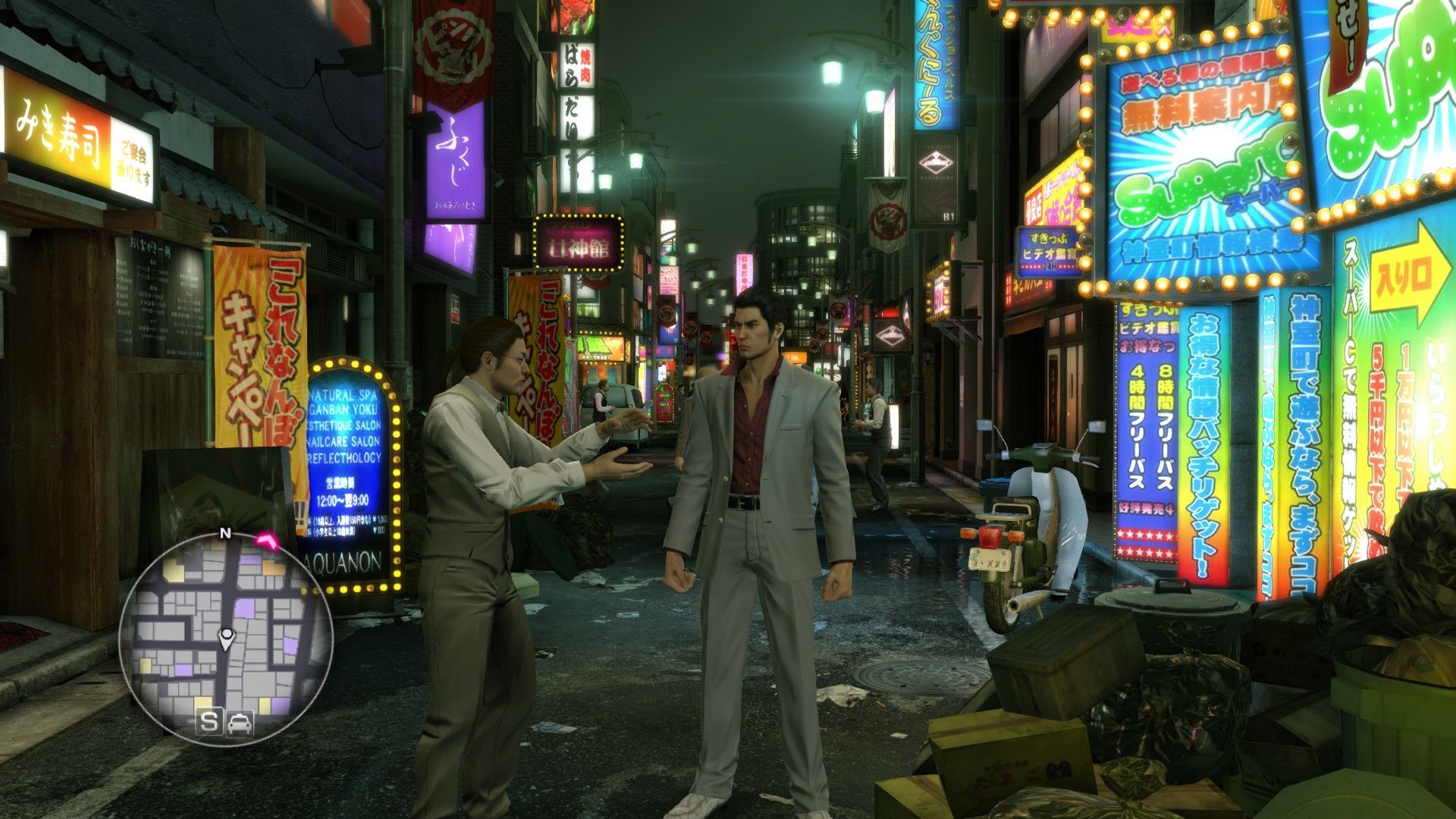 This piecemeal boy scout questiness is why I’ve been happy to punch my way through it, when any other GTA-like would likely make me shrug. It isn't the fighting that sells it (although that does get more satisfying and varied as you unlock new moves in a skill tree). But the nonsense side quests and daft plot unfolding throughout. It swings from silliness to melodrama to heavy stuff in a way that can sometimes be jarring, but is mostly gratifying. In its soapiest moments, whenever some secret or plot twist is revealed, the camera zooms into the faces of its characters, as their eyes widen to the sound of a big dramatic “dunnnn!” Ten billion yen has been stolen. Dunnn! A Yakuza chief has been killed. Dunnn! It's wonderful. 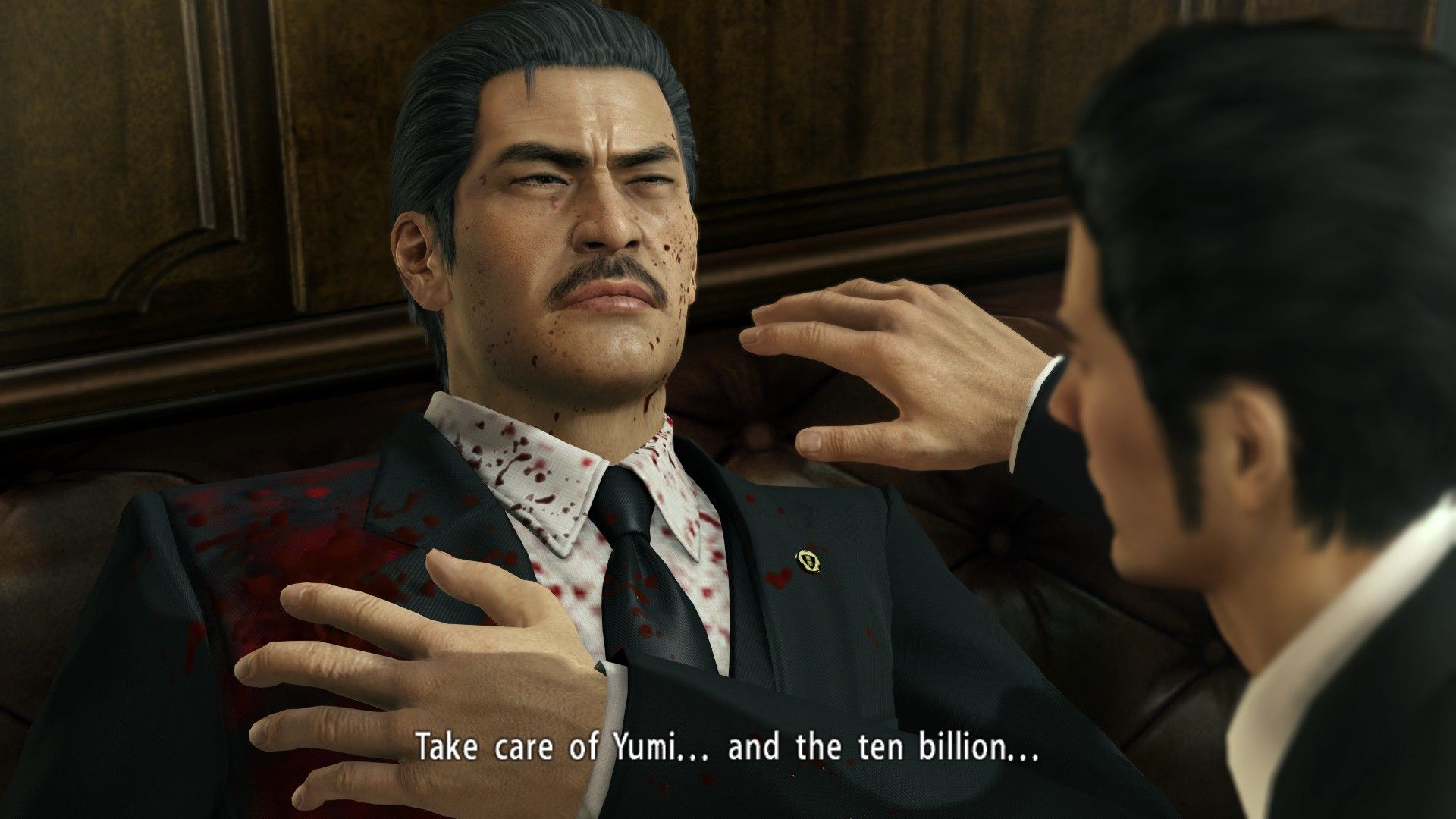 At the same time as being a champion of the people, our boy is also a laughably easy mark. There’s a kind of rough ‘n’ tumble innocence to everything he does. One side-story has him standing furiously over a basket of matches like they are crown jewels, determined to protect them from predators. 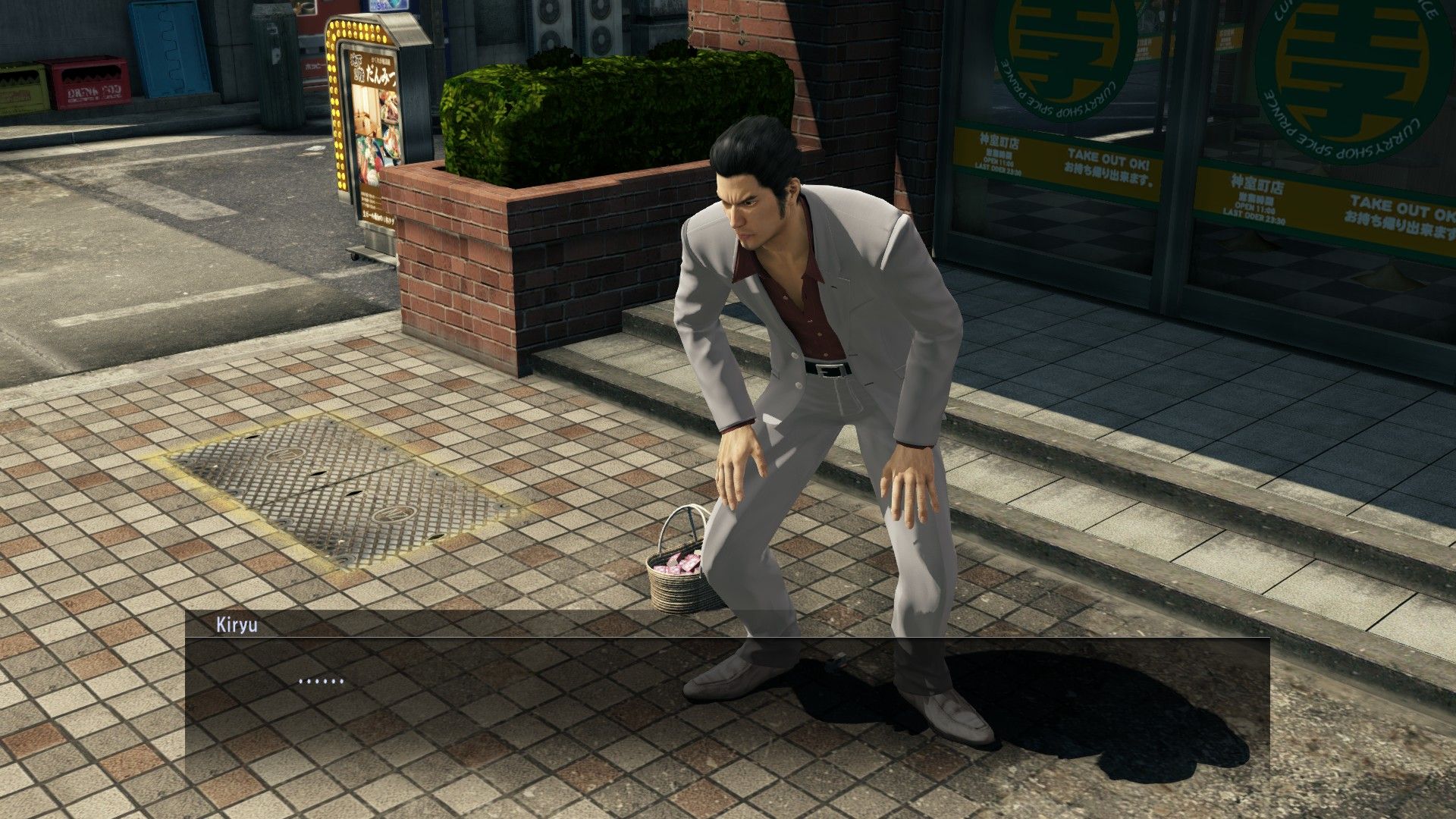 That same likeable naiveté also gets him into scrapes with con men and palm readers with laughable frequency. One subplot sees two con artists telling him about a “lifestone” that brings good fortune to anyone who buys it for the low price of 99,000 yen. “That’s kind of amazing!” says Kiryu. I’m very glad the game is generous enough with its money and loot that it lets you indulge the protagonist’s gullible moments. Yes, reader, I bought the lifestone. 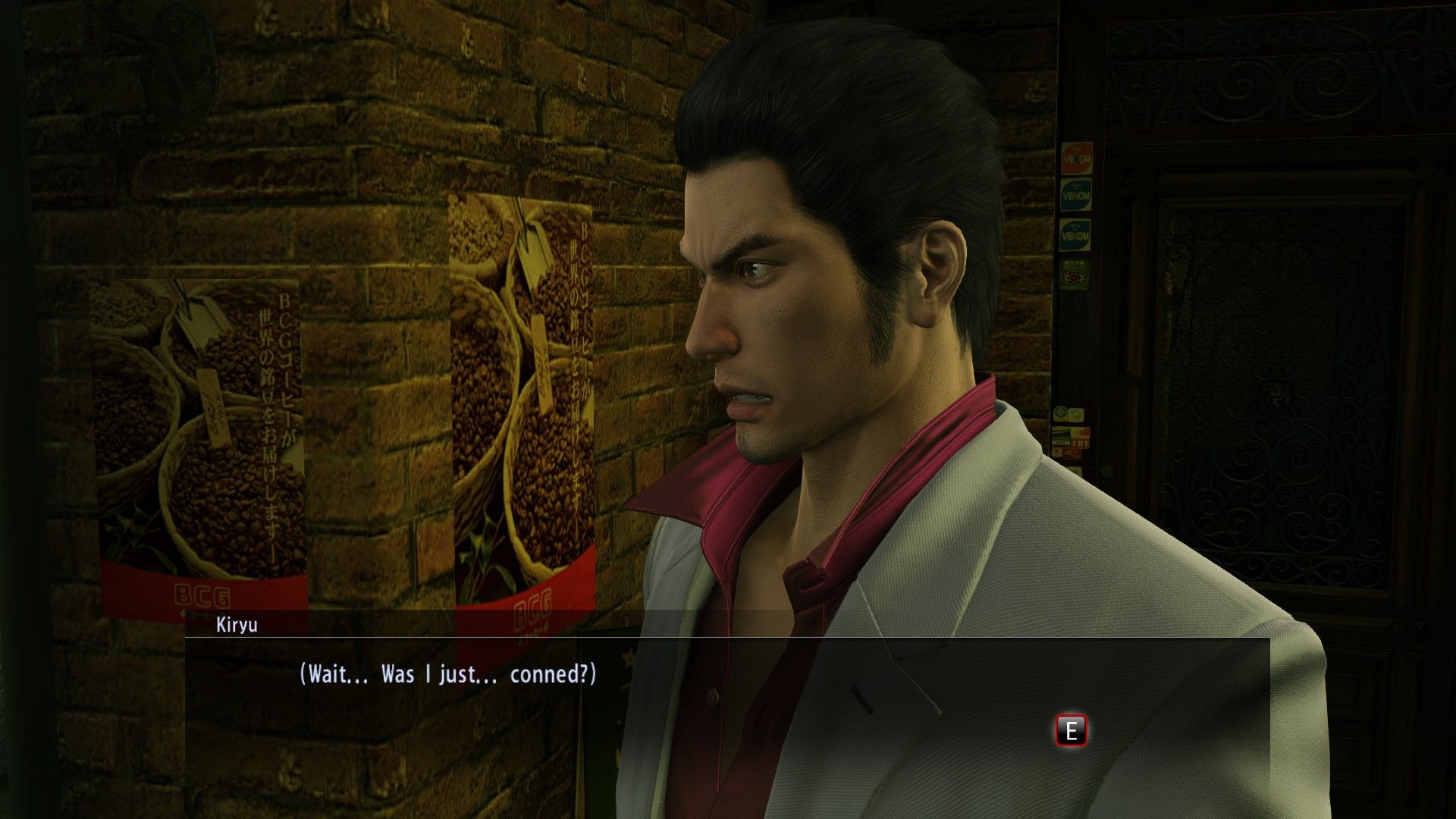 But of course you also have to fight the con men when our boy overhears them gloating about it shortly afterwards. In the end, everyone learns a valuable lesson. 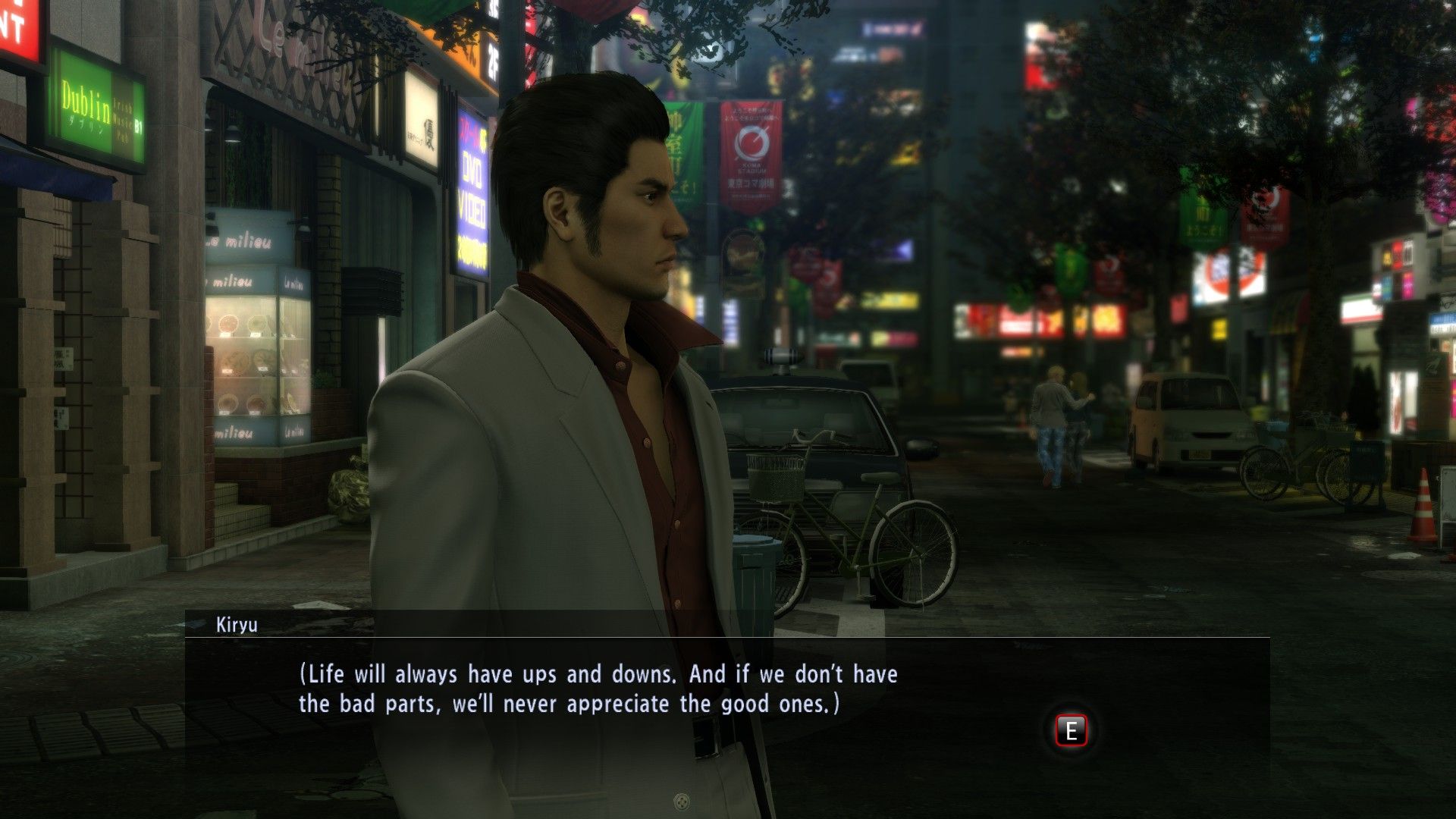 There is a repetitiveness to many encounters, though, and everything always ends in a fight. The same few bread-and-butter street events become especially stale, even if they are gracefully short-winded. Thugs beating someone up, Yakuza men chasing you on the pavement, even the brawls with kooky madman Majima would get a bit lifeless, were he not sometimes capable of dressing up as a policeman or hiding in a giant novelty traffic cone. 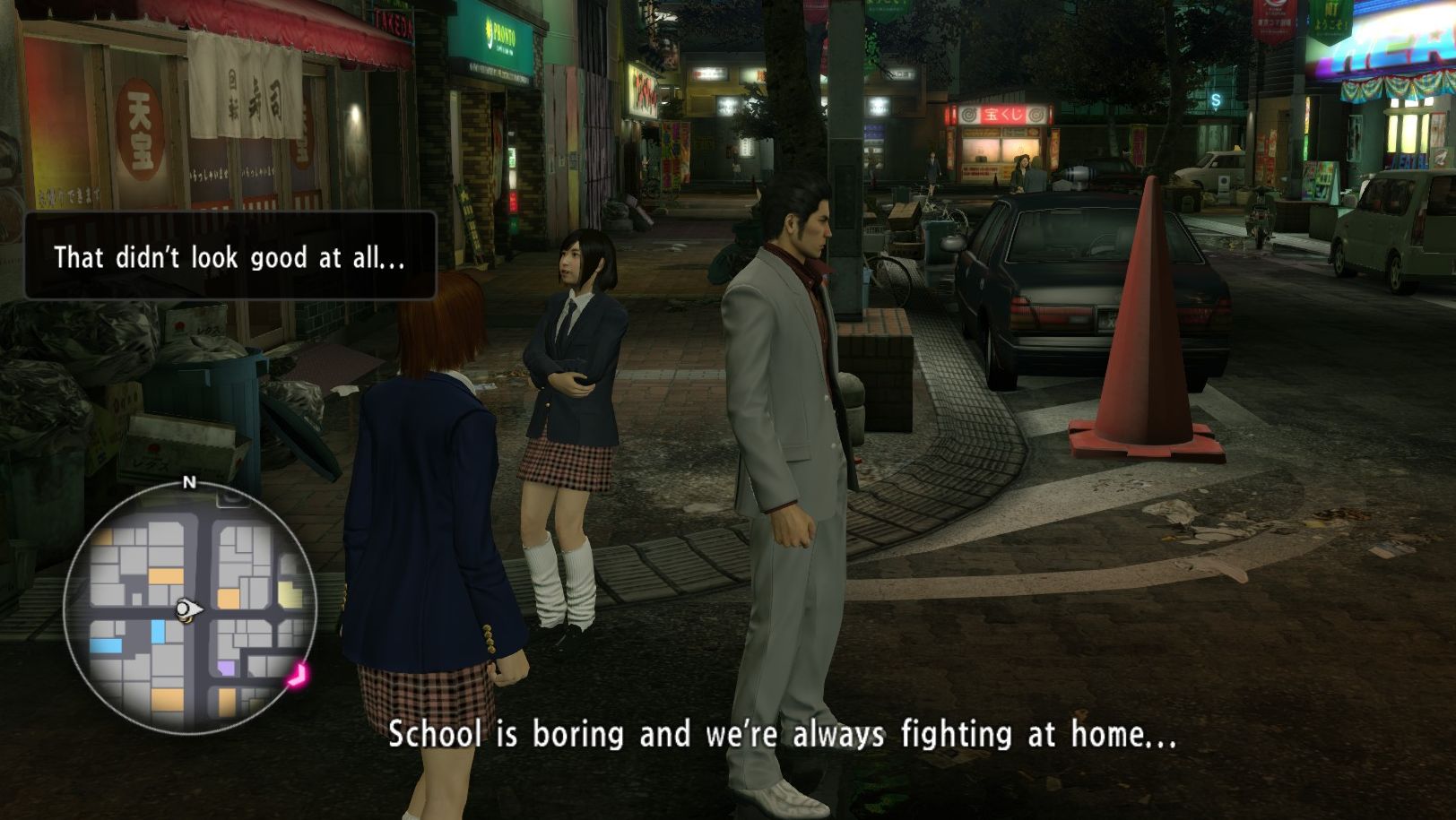 So some repetition is inevitable. This is, after all, a checkbox-ticking game. But it is also an absolute circus of a town, and there is so much to redeem it. There are minigames everywhere. Learn to play Shogi or Mahjong, go hit home runs at the batting machines, play darts with Majima, do a bit of bowling, gamble at underground casinos, go to a karaoke booth alone and sing a sad song that reminds you of being in prison, and then leave. 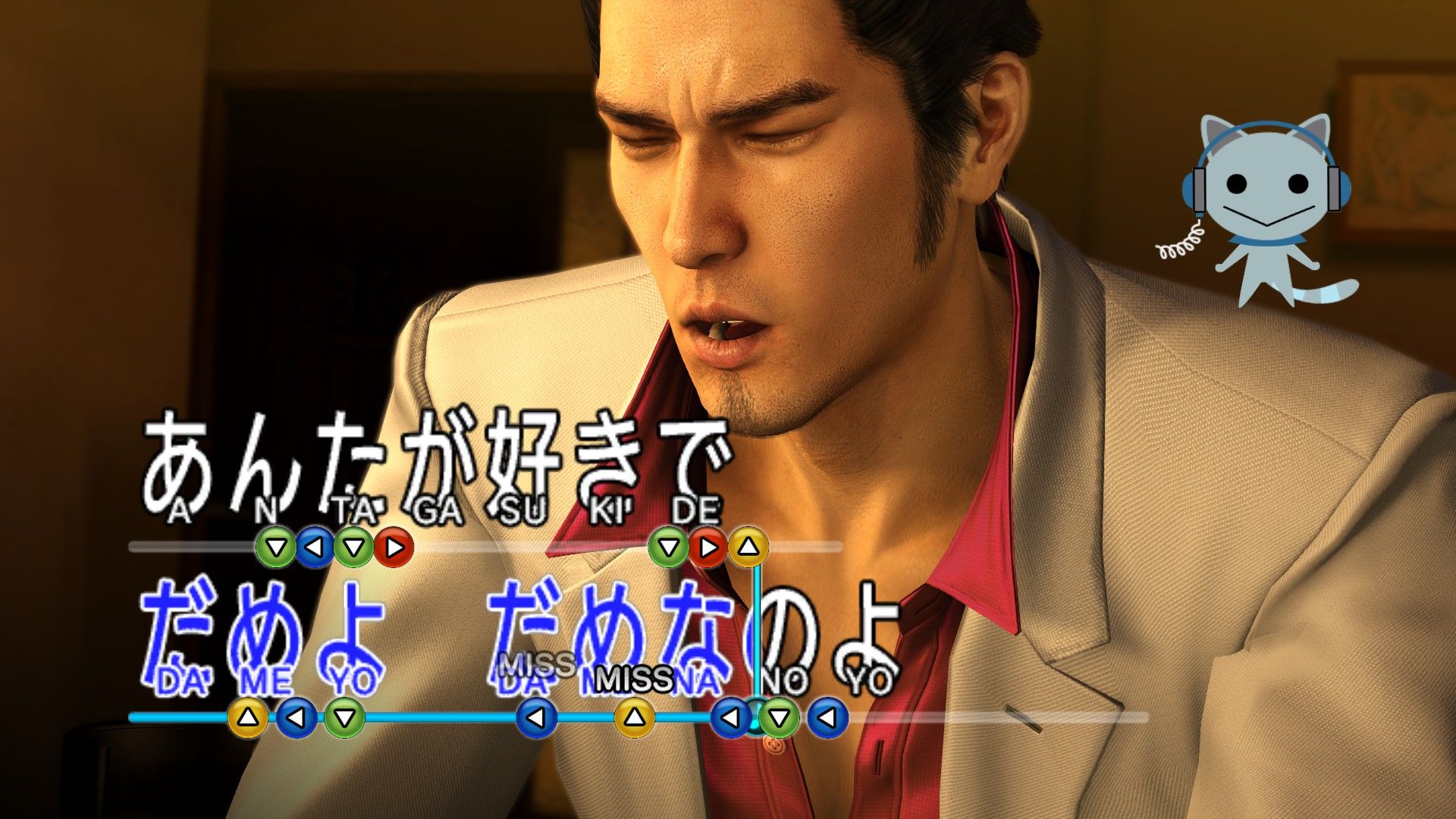 When Haruka, the wee girl you rescue from the murder scene, is later shot in the arm by a bad dude, a friend of our hero prescribes laughter (really). I took her to the Pocket Racer stadium, where she stood in the corner and watched, presumably still hurting from her grazed bullet wound, as I built and raced a tiny sports car on miniature tracks against some 10-year-olds. I lost four races in a row and stormed out in a rage. 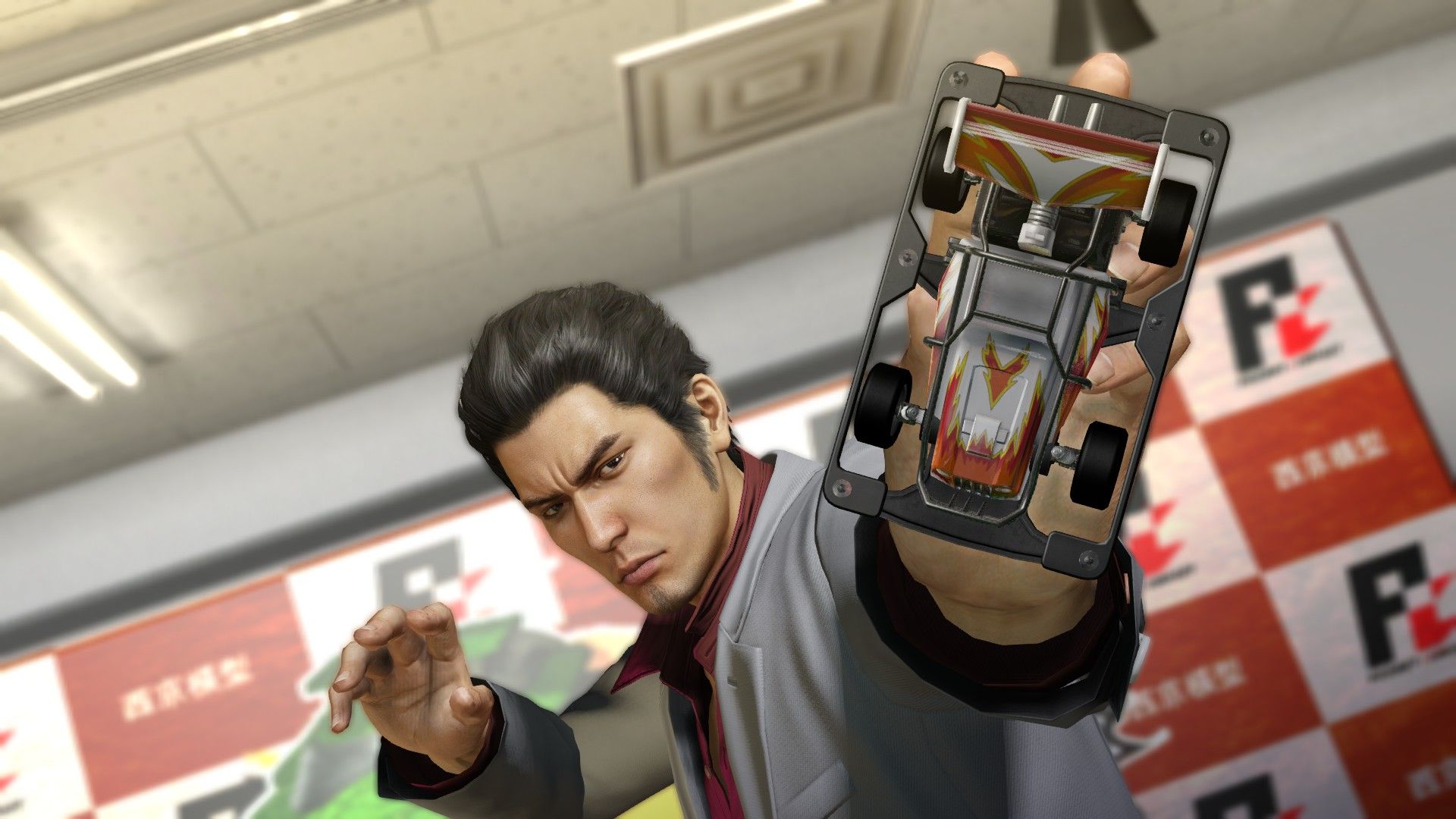 After that, we went gambling. This is quality father-daughter time. 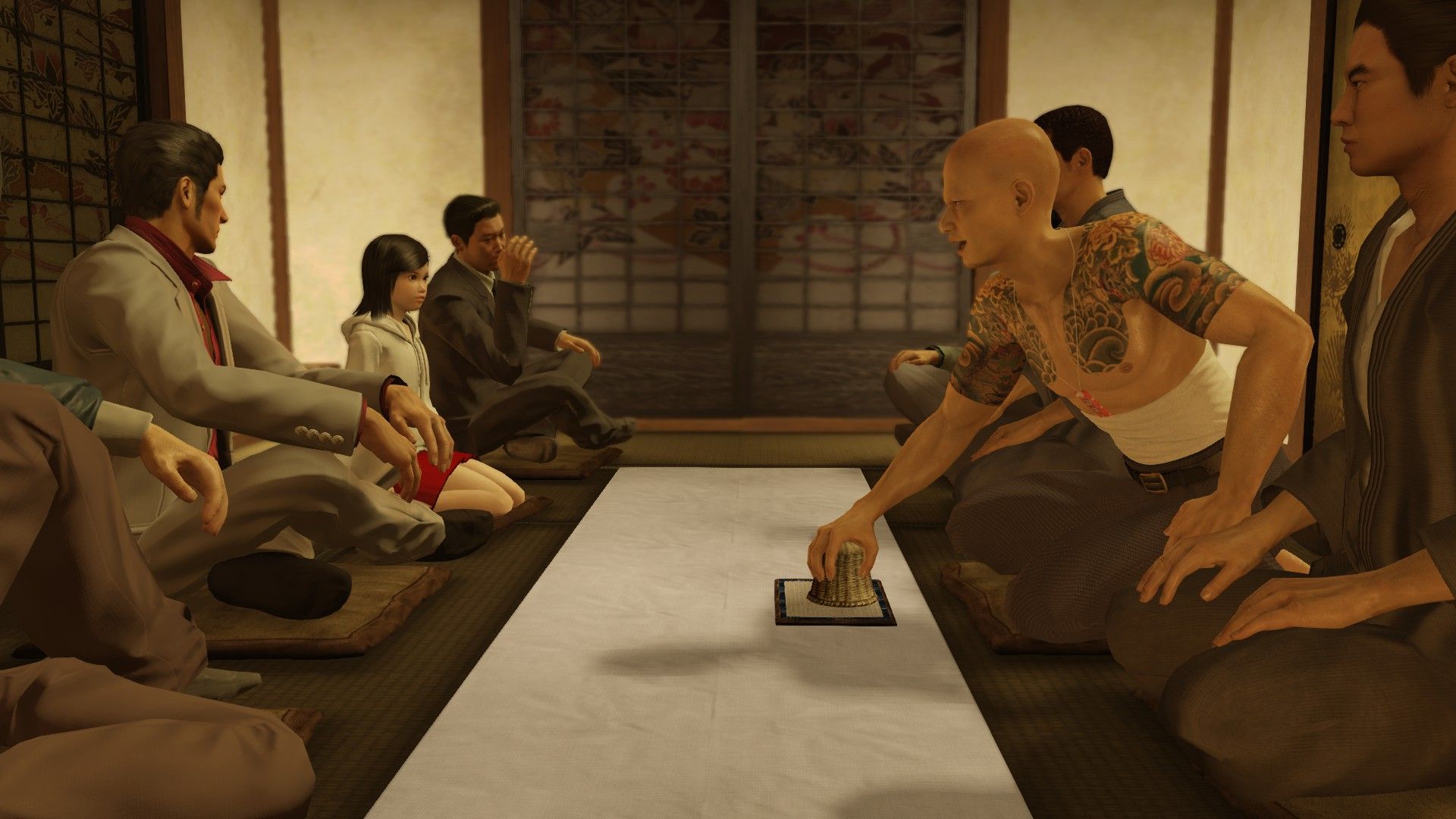 Minigame-peppered open worlds aren’t exactly high-minded game design, but when that world is also a daft self-help crime adventure that costs £15 to enjoy, then they fit perfectly. If Assassin’s Creed games were so cheap and cheerful, so free-wheeling and ludicrous, I might actually be compelled to finish one of them.

There are a few cringey moments, mind. One quest nosedives straight into creepy titillation territory when two schoolgirls appear and proposition Kiryu in a playground. It turns out one of them is the daughter of your detective friend (a hard-boiled hard-drinking coat-wearer called Date). She’s in trouble with loan sharks and is turning to sex work to pay off a debt. The whole ordeal is of course resolved by Kiryu introducing the bad guys to his advice-dispensing knuckles, but the final scene involves Date the detective slapping his daughter in the face. And it’s not that well-known trope-slap of a man revealing his true nature, or realising what he has become. It’s a “she deserves this” slap. A “don't disrespect me again” slap. It made me frown and dislike the cool detective. 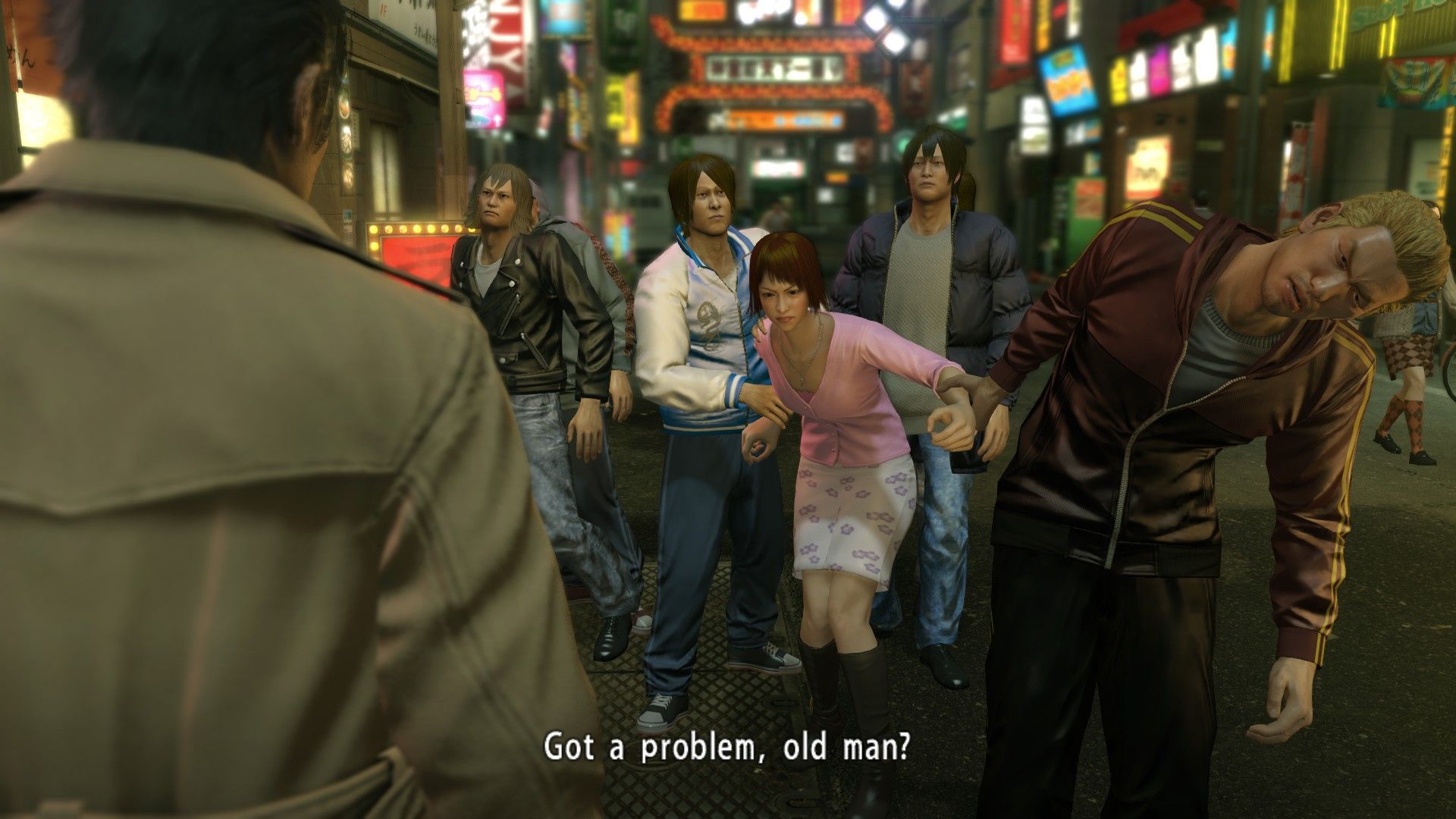 I put this down as a one-off, but then Kiryu himself does the same thing to wee Haruka soon afterward. A slap across the face for being cheeky. On one level it feels stupid to be surprised at this. He is a former Yakuza who regularly crushes faces beneath his heel and knocks people unconscious with signposts. He is prime real estate for domestically abusive man. But because of all the good guy sidequesting, the slap doesn’t feel very “Kiryu”. And moments like this do sour things a little. Like, c’mon fellas, I like you. We’ve been having such a good time. Don’t do that. 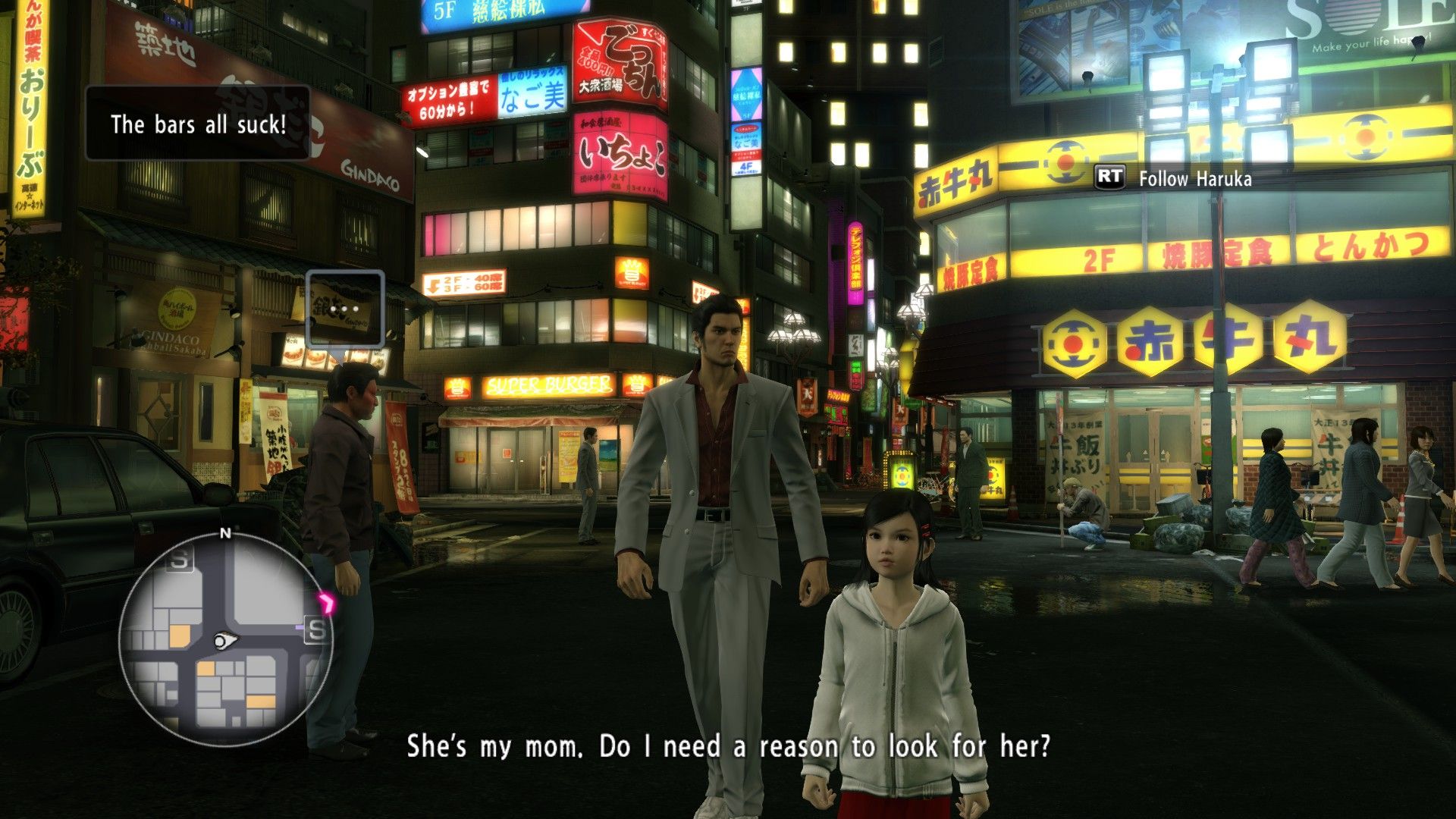 It is also unsurprisingly old-fashioned. Shops have an annoying fixed camera, and the streets have a definite case of the “doorsies”, where it looks likes everything can be entered, when you can really only enter those places highlighted on your minimap. A lot of time is spent looking at that little compass in the corner, following the next waypoint. And the gameiness leaks into the story-telling in a way that either adds to its charm or detracts from it. It’s sometimes hard to tell. I'll never forget the day I went to a funeral and met my old friend “Weapons Shop”. 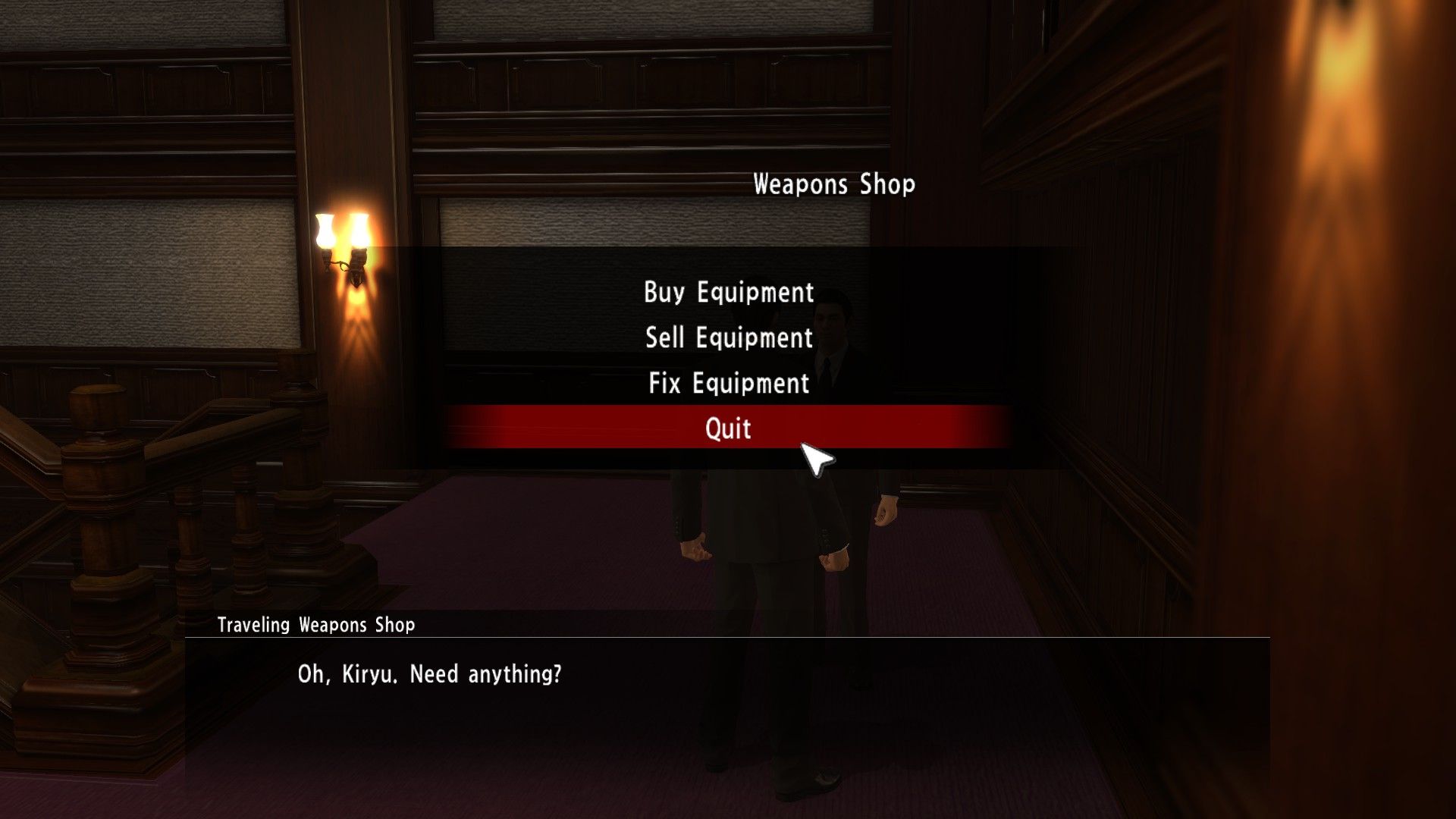 Part of me would wish for these quirks to be squashed, and for the argue-fight-advise formula to be less repetitive. But it also feels pointless to make demands of a game so long in the tooth, so submerged in old ways, and so firmly fine with that. Yakuza Kiwami feels like a game that knows itself, one that is comfortable with its own occasional rubbishness. It would be petty to throw all its humour and good will aside for an overbearing minimap when there are so many laugh-out-loud moments of self-aware storygubbins. 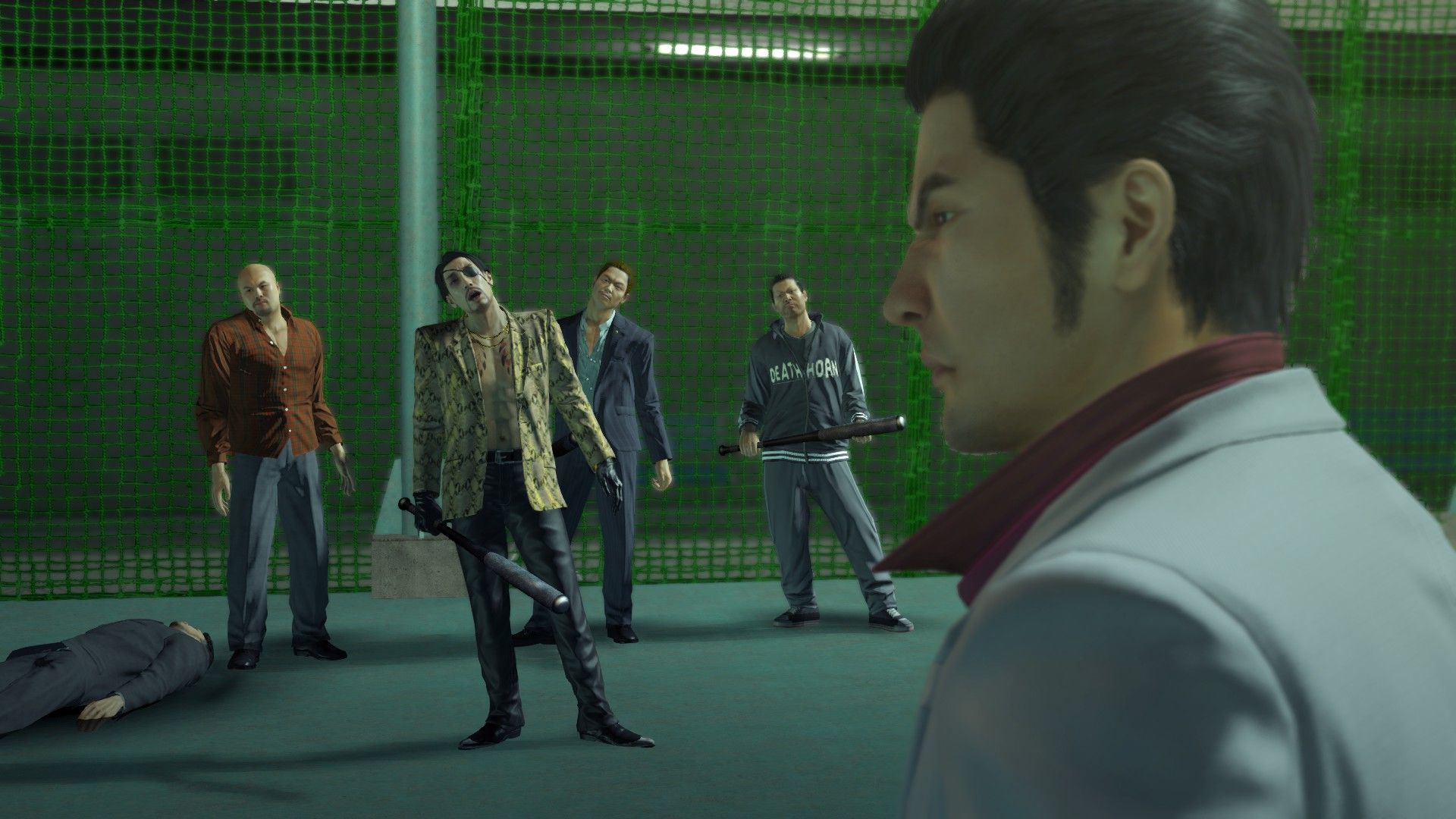 But the best praise I can give this knuckledust ‘em up is that it's still holding its own for my attention in a packed time for good games. On a Friday evening, when I was tempted by a Claire Redfield run in Resident Evil 2, when Apex Legends has been defying my fatigue for battle royales, and when I had just received review code for Metro Exodus, I instead chose to dive back into Kiryu’s town of good-natured brawling; a tale that has only changed superficially since 2005. 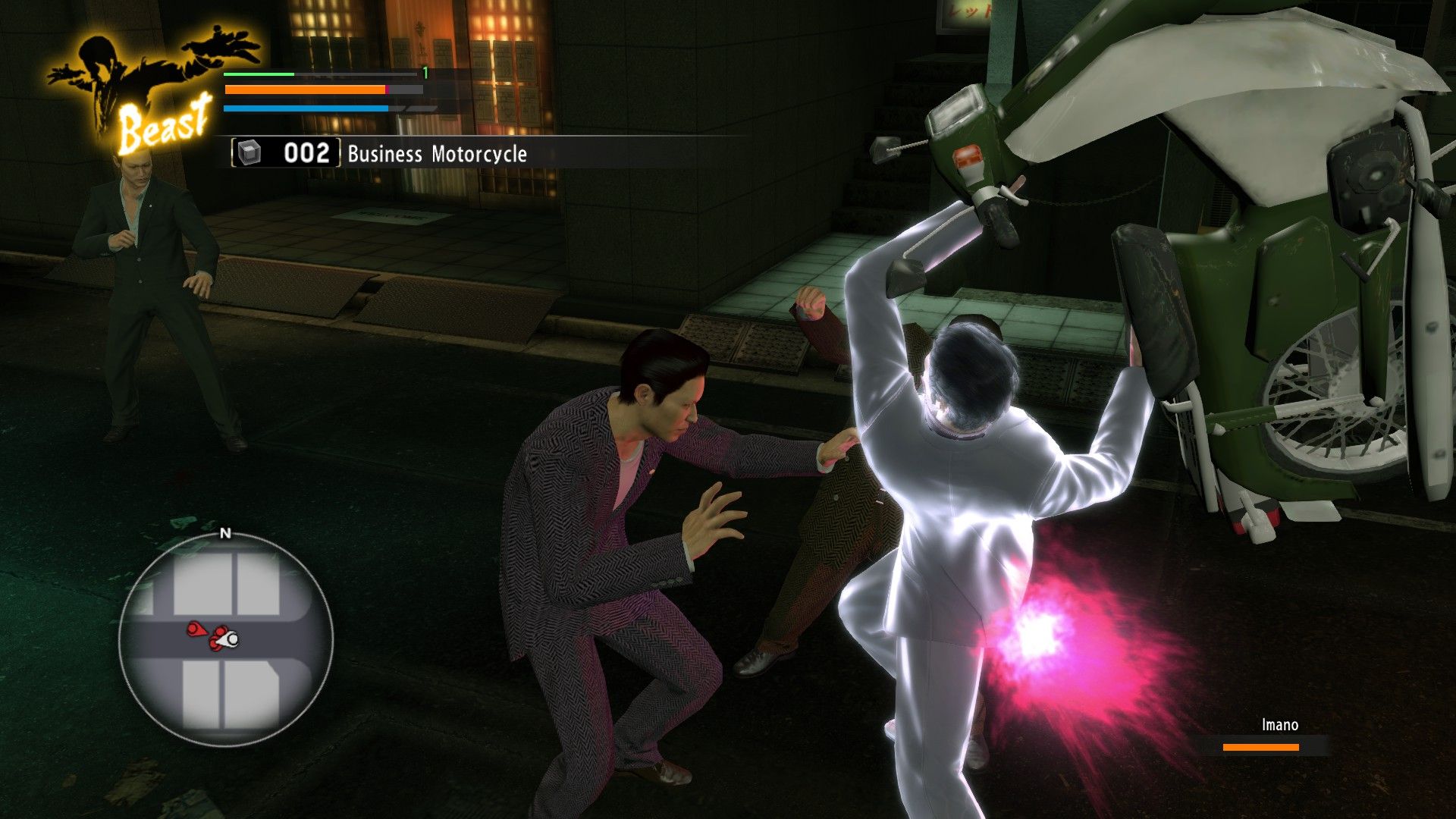 And yet it is still funny, likeable, even wholesome. As an initiate to Yakuza, I can confirm there’s a lot to celebrate here, even minor things. The way it plasters your goal in giant letters over the screen with every mission. The way it gives you experience points for eating a beef bowl and drinking whiskey. They way it tells you at start-up: "REAL YAKUZA USE A GAMEPAD" like some incredible winners-don't-do-drugs screen. At one point, I played a crane game for 20 minutes. What the hell? But besides all this, it is simply a good time. And there is an unmistakable, open-hearted joy to fixing problems for people as an intimidating agony uncle. Even if it usually involves hitting them with a bike first.